Annular pancreas is a rare congenital anomaly which the second part of duodenum partially or completely surrounded by ring-like pancreatic parenchyma (1). For infants, it is usually diagnosed when the obstruction of the duodenum presents (2). But for adults, most of cases become symptomatic at ages between 20 and 50 years, and males occupied 65% of total cases (3). The diverse symptoms making its diagnosis difficult (4), usually include abdominal pain, nausea, vomiting and hematemesis (5). But modern imaging methods make it easier and more accurate, such as CT, MRI, MRCP and ERCP (6-8). However, surgery still remains necessary to confirm diagnosis and bypassing obstructed segment is strongly recommended (9). Pancreaticoduodenectomy could also been conducted when it is associated with obstructive jaundice, malignant diseases or pancreaticolithiasis (10). Laparotomy was the most widely used methods in the most published cases (11). With the development of laparoscopic instruments, minimally invasive surgery has gaining more and more popular with the benefits of less pain, shorter length of stay and rapid recovery, without compromising the efficacy (12). In this study, we presented an adult diagnosed with annular pancreas treated by laparoscopic Roux-en-Y side to side duodenojejunostomy and review the literature about annular pancreas.

A 27-year-old woman was referred for periodically severe episodic epigastric pain that radiated to her back without nausea, vomiting, fever and melena. It usually lasted for several hours, but could be relieved by body flexion. The patient’s past medical history, family history and physical examination were unremarkable except for underweight (BMI 16 kg/m2). Her laboratory tests were within the normal limits. Contrast enhanced CT indicated that the ring-like head of the pancreas surrounded the second part of the duodenum (Figure 1). Esophagogastroduodenoscopy (EGD) revealed narrowing between the second and third part of the duodenum with dilated upper part of the duodenum and food residue within the stomach, without any ulcer and neoplasm (Figure 2). After the initial stabilization and investigation, the laparoscopic approaches were discussed with the patient, and formal consent was obtained for laparoscopic surgery. Under general anesthesia, the patient was placed supine position with two legs apart. The first trocar (10 mm) was inserted bellow the umbilicus with the help of a Veress needle for the camera and CO2 pneumoperitoneum with a pressure of 12–14 mmHg was established, then four more trocars were inserted the same as we described history (13). Laparoscopic exploration confirmed the diagnosis of annular pancreas, the Kocher maneuver was performed to mobilization the narrowing duodenum surrounding by the head of the pancreas by using an ultrasonic dissector (Figure 3A). Then the proximal jejunum was transected 40cm distal to the ligament of Treitz using a linear stapler (Figure 3B). Another linear stapler was used to fashion the side-to-side enteroenterostomy, as it was fired between the opposing walls of the viscera (Figure 3C). The enterotomy was closed in 2 layers with 4-0 prolene sutures (Figure 3D). The area of external compression in the duodenum was bypassed by a side-to-side duodenojejunostomy with the proximal jejunum, it was begun by using 4-0 prolene sutures thread to fasten the jejunal loop to the duodenum with seromuscular stitches (Figure 4A,B). The jejunum and second duodenal portion were then opened using ultrasonic dissector (Figure 4C). The intestinal openings were sutured manually with a single continuous extramucous suture using 3-0 vicryl running sutures and second layer with 4-0 prolene sutures (Figure 4D,E). Operative time was 235 min with 50 mL blood loss. The patient made an uneventful recovery and was discharged 9 days after surgery. She remained at 29-month follow-up with better food tolerance. 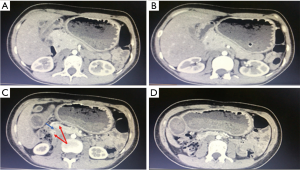 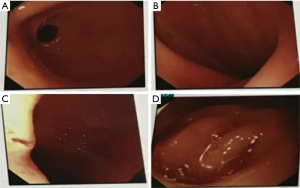 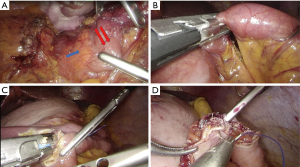 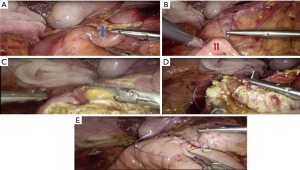 In adults, annular pancreas is an uncommon congenital condition which incidence varied from 0.005% to 0.015% (14). Most adulthood patients develop symptoms during the age of 20–50 years (15). Cases have also been reported in elder patients, which more usually associate with malignancy (16). There are many hypotheses concerning development of the annular pancreas, no clear consensus has yet been reached. Among them, two major hypotheses (Lecco’s and Baldwin’s theory) concerning development of the annular pancreas from the ventral pancreatic anlage were the most plausible (7). Although 33% of the cases are symptomatic, the symptoms in adult are quite variable (4), which are most commonly associated with abdominal pain and gastric outlet obstruction, secondary to duodenal stenosis (15). As the symptoms are not specific, auxiliary examination is important especially imaging studies. Ultrasonography or plain abdominal radiographs, which usually show the classic “double bubble” sign when a duodenal obstruction is present without the ability of differentiate carcinoma involving the head of the pancreas and chronic pancreatitis (17). EGD could also found gastric obstruction, peptic ulceration, and duodenal extrinsic compression. CT and MRI scan can illustrate the behavior of pancreatic tissue around the duodenum (18). MRCP and ERCP is specific in the diagnosis of annular pancreas which shows pancreatic duct (14,19). Endosonography is another useful tool for the adequate visualization of the pancreatic parenchyma (20). Despite all present diagnostic tools including ERCP diagnosis at best is made in only 60% of patients preoperatively reported by Maker in 2003 (14). Therefore, surgery is still the most accurate diagnostic maneuver (2). What’s more, laparoscopic surgery is a good choice for adult patients with annular pancreas both in diagnose and treatment with less postoperative complications and a short recovery time (21).

Treatment for the symptomatic annular pancreas is still remain controversy which depends on the presentation, and in most cases the intervention will be the relief of the duodenal obstruction (14). Bypass is superior to local resection of the annular pancreas, which may cause postoperative pancreatitis, pancreatic fistula, or recurrent duodenal stenosis (22). But division may be possible in some cases of annular pancreas in the left anterior part without containing a duct (3). Duodenoduodenostomy or duodenojejunostomy are the procedures of choice which is better for younger patients and gastrojejunostomy is an alternative option for elder, but choice should be tailored to the patient at hand (2,9,14). In case of grossly fibrotic duodenal C-loop, gastrojejunostomy may be better choice but require an additional vagotomy as it caused more anastomotic site ulcers than duodenoduodenostomy or duodenojejunostomy (23). Laparotomy was the most widely used methods in the most published cases and less by laparoscope. Although there are no studies in which compared the two methods, we believe that laparoscopy can be safely and effectively conducted in the treatment of this disease, with the benefit of minimally invasive surgery which means less trauma and fast recovery, as were seen in cases described literature (Table 1). Despite all of them recovery well, none used a Roux-en-Y side to side duodenojejunostomy. In our case, we have a follow-up of more than 2 years, the patient is feeling well and gains weight without any symptoms.

In summary, we think that laparoscopic duodenal bypass is a minimally invasive choice for annular pancreas in adults with less pain and fast recovery meanwhile giving the surgeon enhanced visualization but more complex suturing. It can be argued that this study had limitations, case report, data from only a single center, and a not very long follow-up. Thus, more control studies from multiple centers are needed to support our conclusions.

Funding: This work was supported by the National Institutes of Health of China [grant number W2017ZWS07].

Informed Consent: Informed consent was obtained from the patient and her husband included in the study.