Alzheimer’s disease (AD) can explain about 59% of all dementia, which is deemed as the leading form of dementia among elderly (1). It is believed that genetic and environmental factors influence the incidence of the late-onset AD (LOAD) together. Growth factor receptor-bound protein-associated binding protein 2 (GAB2), as well as other susceptibility genes, had been confirmed to have significant associations with the LOAD by several genome wide association studies (GWAS) (2-6). GAB2, situated on 11q14.1, was first discovered to modify AD risk in APOE ε4 carriers in Caucasian (7). Since then, subsequent research was continually conducted to explore the association between GAB2 gene and the AD susceptibility in various districts and ethnic groups, and controversial conclusions were obtained (8-21).

GAB2 protein belongs to the family of scaffolding and adapter proteins, and is abundantly expressed in the central nervous system (CNS) especially in prefrontal cortex and hypothalamus. It participates in many signaling pathways including cell proliferation, differentiation, survival and apoptosis (22,23). In AD, GAB2 protein is an amplifier of PI3K/AKT signaling, which is able to reduce tau phosphorylation to prevent the formation of neurofibrillary tangles (NFTs) and neuronal loss (24,25). The diminished GAB2 expression would lead to a high level of phosphorylation of tau and the formation of NFTs, which are induced by glycogen synthase kinase 3β (Gsk-3β). Reiman et al. also demonstrated small interfering RNA (siRNA)-mediated reduction of GAB2 protein increased tau phosphorylation and NFTs formation in vitro (7). From the evidence, GAB2 can alter tau pathology and further mediate the susceptibility of AD. However, it is still undefined about the role of GAB2 polymorphisms. As phosphorylated tau (P-tau), total tau (T-tau) and amyloid β (Aβ) in cerebrospinal fluid (CSF) could be effective biomarkers of AD; however, little is illustrated whether GAB2 polymorphisms mediated the susceptibility of AD through the change of CSF biomarkers. Therefore, in our study, we research the impact of GAB2 genetic polymorphisms on CSF biomarkers. In this way, we sought to provide clues to how GAB2 genetic polymorphisms influence AD pathogenesis.

In our paper, we used the data from the ADNI database (https://ida.loni.usc.edu/), which is a large, multicenter, longitudinal neuroimaging study. At the very beginning, ADNI aimed to identify mild cognitive impairment (MCI) and AD at earlier stages under the combination of serial magnetic resonance imaging (MRI), other biological markers, and clinical and neuropsychological assessment. The details about the ADNI cohort were described elsewhere (26,27). Our study recruited 627 individuals, including 206 cognitively normal (CN), 377 MCI patients, and 44 AD patients at baseline eventually and we downloaded their detailed demographics from the ADNI website in 2015 (Table 1). The ADNI study was approved by all the Institutional Ethical Review Boards of all participating centers. All participants signed written informed consent.

We downloaded all CSF data from ADNI dataset. The steps of acquisition and measurement of CSF were as follow: firstly, collected and then transferred samples into corresponding tubes; secondly, held them in dry ice for 1 hour for freezing; thirdly, transported them to corresponding laboratory at the University of Pennsylvania Medical Center for measurement; fourthly, thawed them at room temperature, prepared aliquots (0.5 mL)and reserved them at −80 °C; finally, measured proteins with the multiplex xMAP Luminex platform and with Innogenetics immunoassay kit-based reagents (29). Full details of analytical platform are exhibited at site (http://adni.loni.ucla.edu).

We carried out all statistical analyses with R3.12 (http://www.r-project.org/) and PLINK 1.07 (http://pngu.mgh.harvard.edu/wpurcell/plink/). One-way analysis of variance (ANOVA) was used to test differences in continuous variables (age, education years, cognitive scores, volume, etc.) and chi-square test was used to examine categorical data (gender, APOE ε4 status). We assessed possible relationship between GAB2 SNPs and CSF biomarkers at baseline in total sample by a multiple linear regression model, in which age, gender, education years, and APOE ε4 status were regarded as covariates. In addition, we explored the correlation between these GAB2 SNPs and these suggestive phenotypes in the haplotype-based association analysis, and made subgroup analysis to investigate the influence of GAB2 loci in the AD pathogenesis. We used Bonferroni correction to control the false discovery rate of multiple tests. Bonferroni-corrected Pc<0.05 was considered statistically significant. 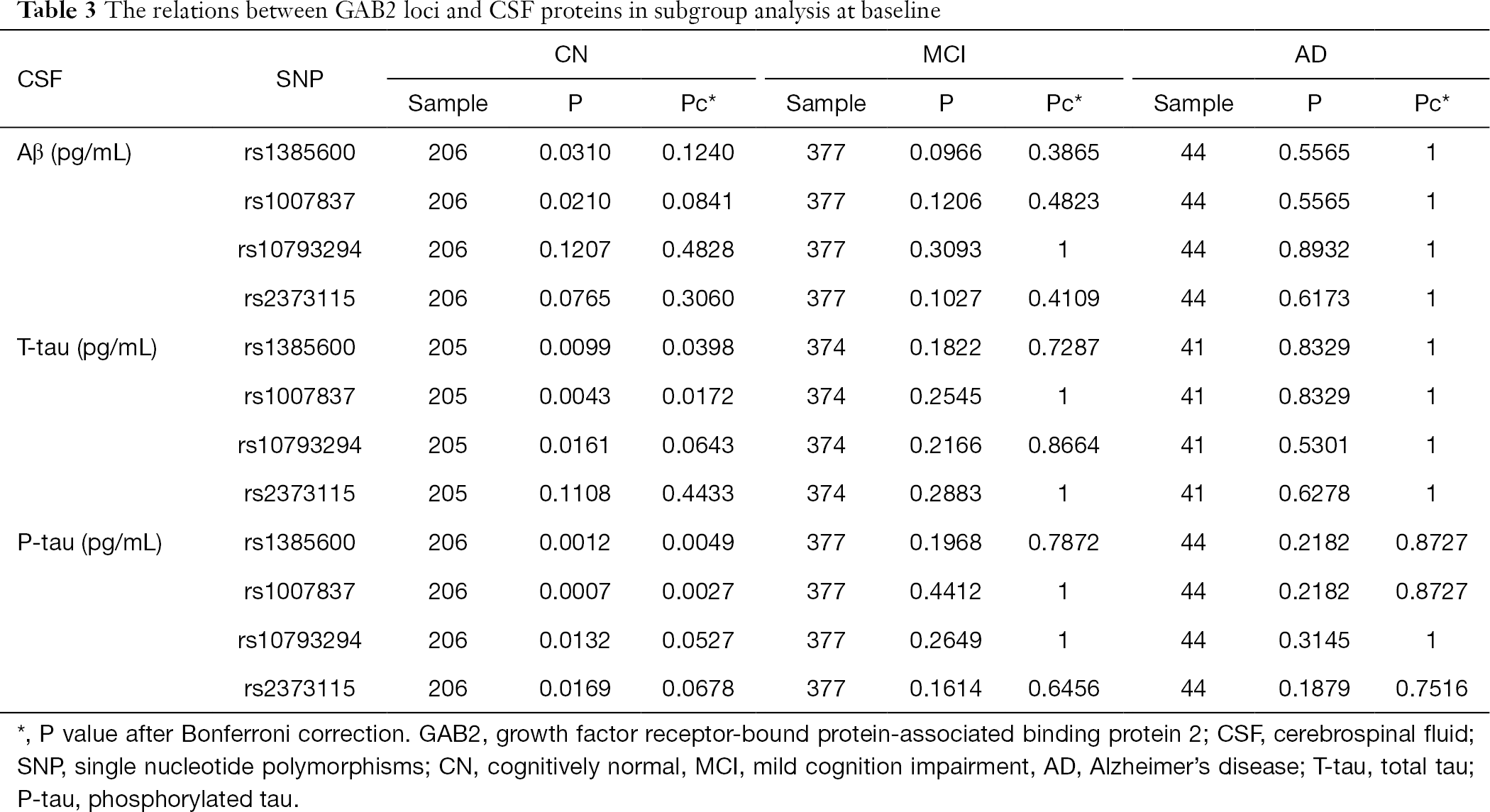 Our study has analyzed the correlations between GAB2 genotypes and CSF biomarkers in ADNI database. We corroborated that GAB2 genetic variants displayed significant effects in the expression of the three CSF biomarkers.

Different with many prior findings about the involvement of GAB2 in AD pathogenesis, our study revealed that GAB2 loci altered the expression of Aβ, P-tau and T-tau. Among the four SNPs associated with the level of CSF proteins, rs2373115 has also been showed a significant association with AD in APOE ε4 carriers (30). Rs2373115 is the locus that has been studied most frequently in different races followed by rs1385600 and rs1007837, and various conclusions were drawn. Interestingly, Zou et al. considered rs1385600 and rs2373115 as protective GAB2 variants because they could reduce LOAD pathology via the elevated GAB2 mRNA levels in lymphoblastoid cells in some ethnicities. Additionally, we should pay attention to that we did not confirm any association of the four SNPs with the three CSF biomarkers in MCI and AD subgroup. This might be explained by the different roles of these loci in CN individual verses those in MCI and AD.

GAB2 protein plays a vital role in the phosphorylation of kinases that involve in core neuropathogenesis of AD (7,31-33). The abnormal tau is thought as one of primary pathological factors in AD. GAB2 protein is responsible for the inhibition of tau protein phosphorylation and tangle formation known as NFTs (7). GAB2 can activate PI3K, resulting in the activation of PKB and further inactivation of GSK-3β (34). GSK-3β overexpression is involved in the phosphorylation of tau, the linkage between amyloid and tau pathology, and microglia-mediated inflammation (35,36). Therefore, it is rational to suppose that the reduced GAB2 expression and/or function would lead to the increase in tau phosphorylation. Moreover, studies in vitro indicated that the diminished GAB2 protein working through siRNA could increase tau phosphorylation (7). It remains unclear whether this coupling affects phosphor-ERK-1 and phosphor-ERK-2 signal transduction pathway though this mechanism in AD pathogenesis (37). In addition, GAB2 also promotes neural/glial cell proliferation to prevent the occurrence of AD via the interaction with a Rho family GTPase-activating protein (GC-GAP) which is mainly expressed in the brain (38). Collectively, GAB2 is a scaffolding protein linked with multiple signaling pathways that influence AD-related tau and cell survival or other aspects of AD pathogenesis.

Now, the genetic effects on neuroimaging and CSF markers can be depicted directly using neuroimaging phenotypes (39). So, possible mechanisms through which these genetic factors modulate the development of AD might be disclosed. The crucial strength of this study lies in quantitative traits (QTs) association studies, which have less sample size and increased statistical power requirements compared to traditional case-control designs. Moreover, ADNI database has advantages of detailed cognitive assessment agreement and diagnostic criteria, and shows relative changes across the spectrum of AD. However, we should notice that there still are some limitations. Firstly, the QT analysis reduced the sample size, because not all the participants have all information. Secondly, we recruited only Caucasians to reduce the influence of population stratification. However, the frequency of four GAB2 loci differs in various populations, so our results were not on behalf of other ethnicities and replication studies in other races are indispensable. Thirdly, not all candidate gene variants in GAB2 of ADNI database were analyzed.

Collectively, our research demonstrated that GAB2 variants were significantly associated with the expression of Aβ, T-tau and P-tau protein in CSF, which further supported that GAB2 genetic variation modulates AD risk via the alteration of both Aβ and tau pathology. Moreover, these variants might specifically affect CN individuals, which offer new insights into the relationship between GAB2 polymorphisms and AD. However, several limitations precluded the explanation of these findings, and future researches are wanted to figure out the detailed molecular mechanisms by which GAB2 influence Aβ and tau protein with a longer follow-up or in other ethnicities, and an independent population is needed to replicate these findings.

The authors thank scientists contributed in developing the clinical and genetic resources necessary to collect these data and complete this project. The authors also gratefully thank the efforts of hundreds of individuals whose help and participation made this work possible.

Ethical Statement: The ADNI study was approved by all the Institutional Ethical Review Boards of all participating centers. All participants signed written informed consent.