Meta-analysis of the association between CD33 and Alzheimer’s disease

Alzheimer’s disease (AD) is a complicated neurodegenerative disease with progressive cognitive impairment common in elderly people. In 2006, the prevalence of AD was 26.6 million around the world, and the number of AD will quadruple by 2050 (1). AD consists of early-onset AD (EOAD) and late-onset AD (LOAD). LOAD, which accounts for the majority of AD, is the result of interaction between environmental and genetic factors (2). Genetic factors play an important role in it, and the heritability is estimated to be up to 80% (3-6). Up to now, the apolipoprotein E (APOE) gene is the only one gene that was certainly recognized to increase the risk of LOAD, but the APOE ε4 gene can only interpret 27.3% about the risk of AD onset (7-10). Therefore, further efforts are needed to look for risk genes other than APOE.

The cluster of differentiation 33 (CD33) gene is an immune function protein located in 19p13.33 with several functions, such as cell adhesion, anti-inflammatory signaling, and endocytosis functions (11). In addition, it is one of the members of the sialic acid-binding Ig-like lectin (SIGLEC) family (12). Several studies have investigated the important role of CD33 rs3865444 polymorphism in AD. As for rs3865444, the risk allele (C) was related with the overexpression of CD33 on mononuclear cell surface, which is involved in the pathogenesis of AD through down-regulation of β-amyloid (Aβ) internalization, accumulation of neuritic amyloid pathology, and regulation of microglia levels (13). Both lines of evidence indicate that CD33 gene could play an important role in susceptibility to AD.

In 2011, three large-scale genome-wide association studies (GWAS) conducted by Hollingworth et al. (14), Carrasquillo et al. (15), and Naj et al. (16) confirmed that the gene CD33 showed significantly correlation with LOAD in Europe. After that, the associations between AD and the variants of CD33 have become the focus of many studies. But the conclusions of these studies differ from each other. But the conclusions of these studies are inconsistent (7,14-29). To better illuminate the associations between CD33 and the susceptibility to AD, a meta-analysis was conducted by analyzing and summarizing the relevant studies.

We searched literature in PubMed, EMbase, and Cochrane library up to 1 October 2017. Medical Subject Heading (MESH) terms were used: (CD33) AND {[(Alzheimer’s) OR dementia] OR Alzheimer disease}. Additional studies were screened manually in each qualifying study.

We chose the studies meeting the following criteria: (I) studies must evaluate the associations between polymorphism of CD33 and the susceptibility to AD; (II) the research type of the selected studies was case-control design; (III) adequate information should be accessible, such as the study sample size of each research group, allele or genotype frequencies, OR, 95% CI and the P value; (IV) the diagnosis of AD should meet the clinical criteria set by the World Health Organization.

According to the specified selection criteria, all data were extracted independently by two investigators. The following data were extracted: (I) name of the first author, (II) publication year, (III) country and ethnicity of origin, (IV) numbers of cases and controls, (V) allele frequency distributions and numbers of different genotypes, (VI) the OR with 95% CI of CD33. Newcastle-Ottawa quality scale (NOS) was selected to evaluate the quality of eligible studies: (I) the selection; (II) the comparability; (III) the exposure. Studies with a score larger than seven points were considered to be of high quality.

Stata 11.0 software version 11.0 (StataCorp LP, College Station, TX, USA) and R software [Version 3.2.2, Copyright(C) 2014 The R Foundation for Statistical Computing] were selected for statistical analysis. Hardy-Weinberg equilibrium (HWE) was used to verify the representation of the selected studies. We conducted a subgroup analyses on the basis of ethnicity (Asian, Caucasian and Negroid). Statistical heterogeneity could be evaluated by Cochran’s Q statistic and I2 Statistic test. When significant heterogeneity (PQ >0.10 and I2>50%) was observed, the random-effects model was carry out; in addition, the fixed-effects model was adopted. In order to assess the stability of the results, we conducted sensitivity analysis by omitting a single study each time. Funnel plots were generated by the R software to evaluate the potential publication bias. And publication bias was also checked by Egger’s linear regression analysis and Begg’s rank correlation test, and P<0.05 indicated a significant publication bias.

In the present meta-analysis, a systematic overview of relevant studies to evaluate the risk between gene CD33 and the susceptibility to AD have been accomplished. Eighty-five articles were searched from PubMed, EMbase, Cochrane library and other sources, such as using a manual retrieval from relevant studies. After the initial scan of titles and abstracts, 39 unrelated studies were excluded because they were not relevant to AD or they were duplicate publications. According to the inclusion standards set in advance, 28 publications were excluded. After our screening, 18 articles on relevant SNPs were included in this meta-analysis (Figure 1). Eventually, 38 researches investigating the single nucleotide polymorphism (SNP) of rs3865444 and 4 researches investigating the SNP of rs3826656 were included. The characteristics of these involved studies were presented in the Tables 1,2. 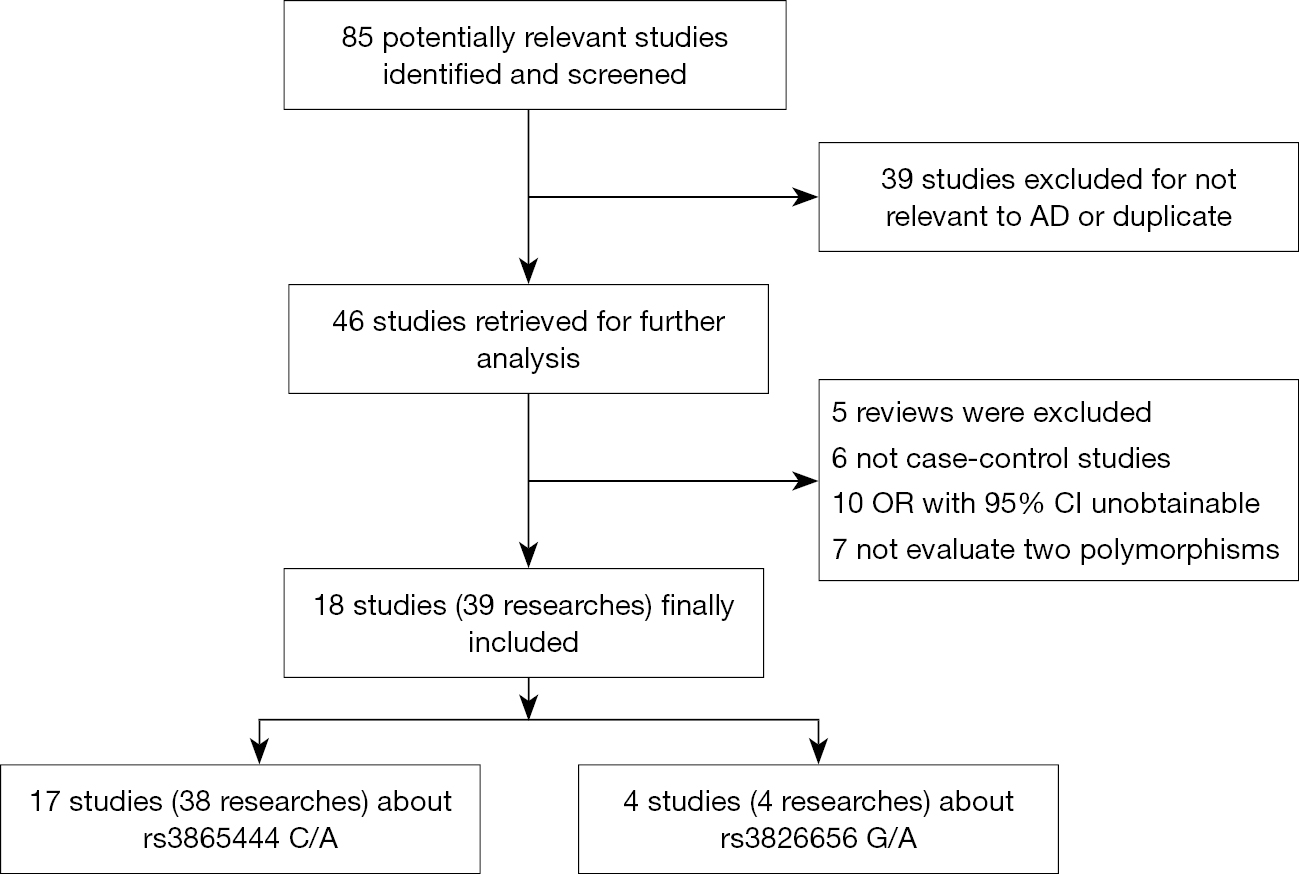 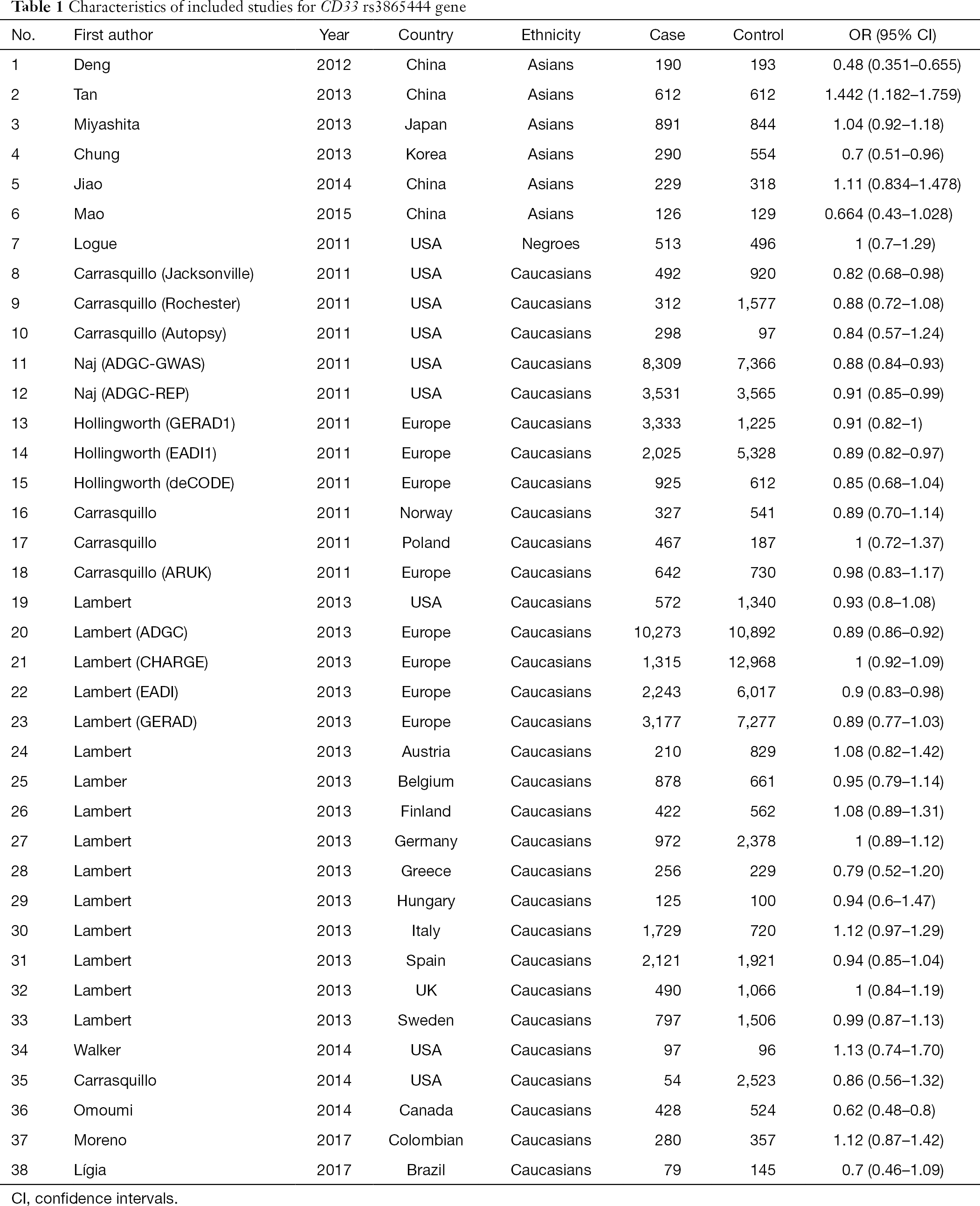 We studied the correlation between SNP rs3865444 of CD33 and AD susceptibility in this meta-analysis. Among the 38 enrolled researches, 31 were performed in Caucasian population, 6 were performed in Asian population and only one was performed in Negroid population. In the pooled OR, we can observe significant heterogeneity. We used a random-effect model to assess the overall effect of the C/A allele model (I2=60%, P<0.01), and the A mutant of rs3865444 was found to be significantly associated with AD prevention (OR =0.93; 95% CI, 0.90–0.97; Figure 2). Considering the difference of ethnicity, we made subgroup analyses. The existence of high heterogeneity could be identified. In the stratified analysis among Caucasian ethnicity, the heterogeneity was decreased (I2=33%, P=0.04), and a fixed-effect model could be used. Similarly, the association of rs3865444 and AD susceptibility was not verified (OR =0.91; 95% CI, 0.89–0.93; Figure 3). Besides, in the stratified analysis among Asian ethnicity, the heterogeneity was increased (I2=88%, P<0.01), and a random-effect model may be used. But the association between rs3865444 and AD susceptibility turned into no significance (OR =0.87; 95% CI, 0.65–1.17; Figure 4). 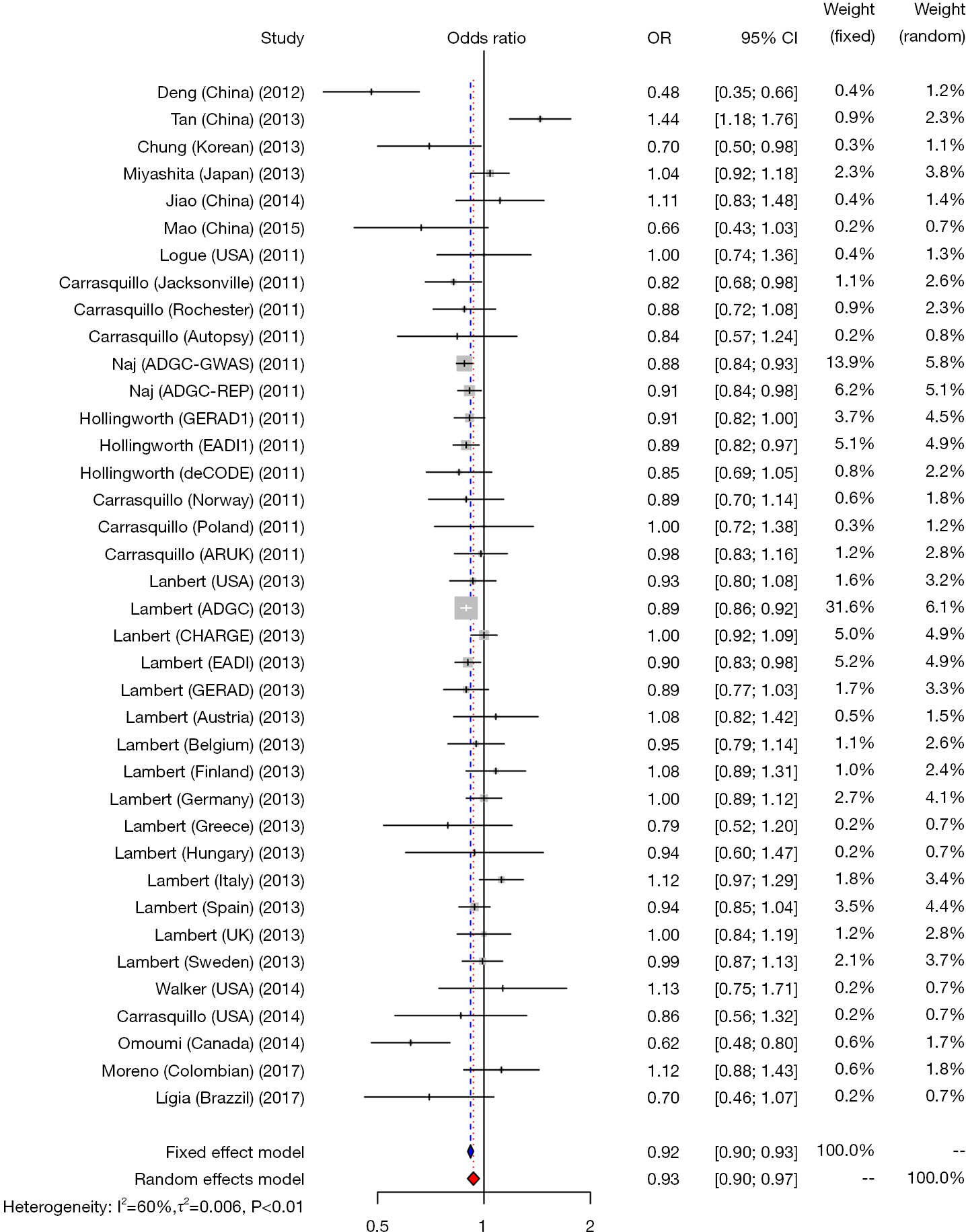 Figure 2 The forest plot of CD33 rs3865444 genetic variation with AD in combined population (gene model comparison: C vs. A). Each comparison is presented by the name of the first author and the year of publication. The contrast has an OR of 0.93 (95% CI, 0.90–0.97; P<0.01) in the random-effects model. Values less than 1 denote a decreased risk for AD with the A allele. AD, Alzheimer’s disease; CI, confidence intervals; OR, odds ratio. 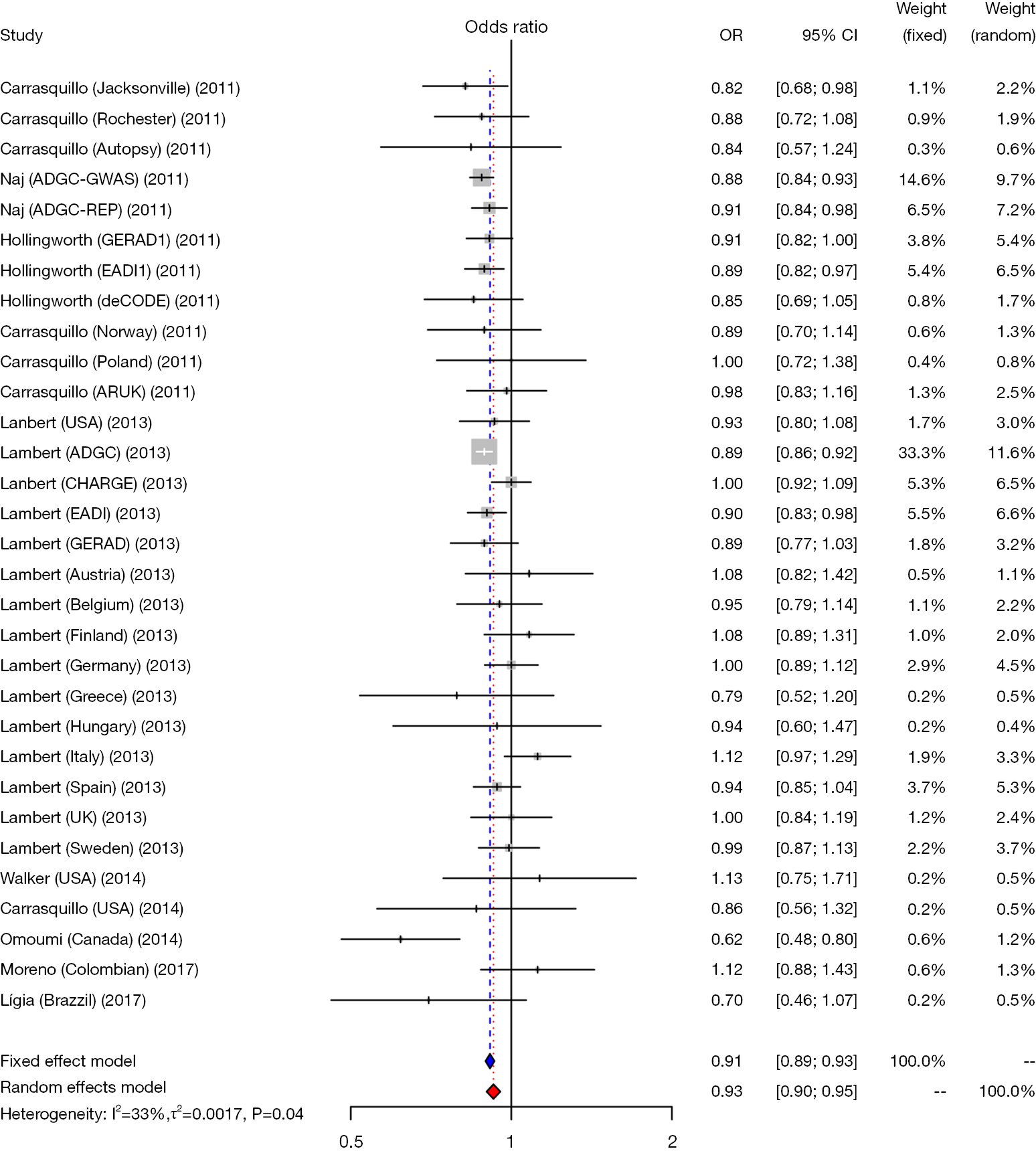 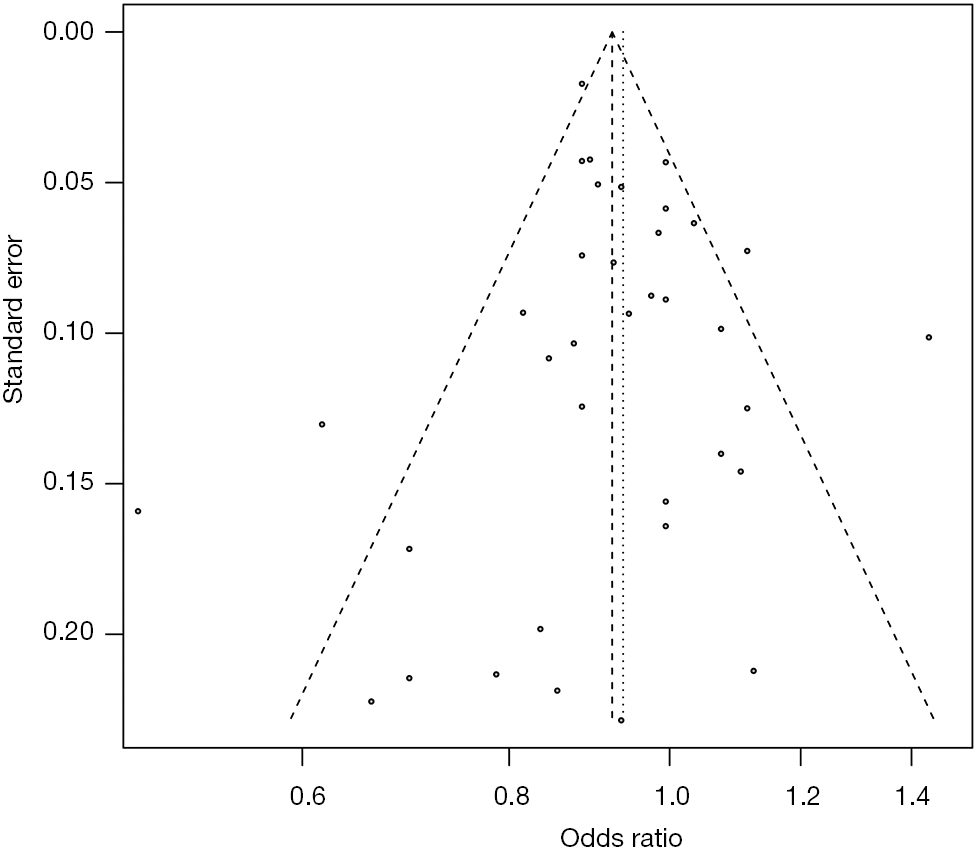 Figure S1 Funnel plots of CD33 rs3865444 polymorphism in allele model. The shapes of the funnel plots revealed a degree of symmetry visually which indicated publication bias may not exist. Each point represents a separate study for the indicated association.

Figure S2 Funnel plots of CD33 rs3826656 polymorphism in allele model. The shapes of the funnel plots revealed a degree of asymmetry visually which indicated publication bias may exist. Each point represents a separate study for the indicated association. 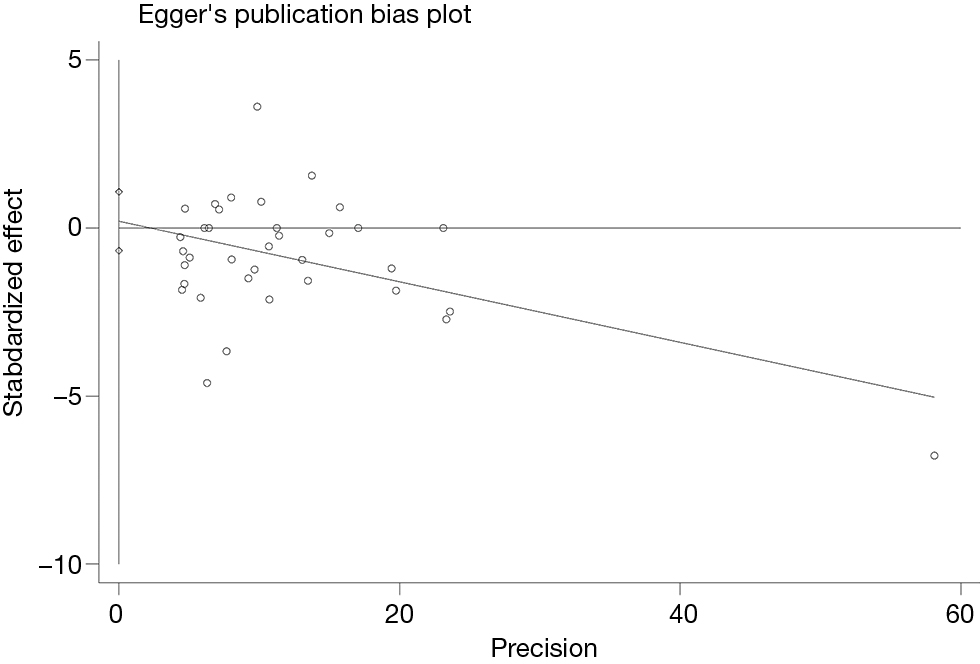 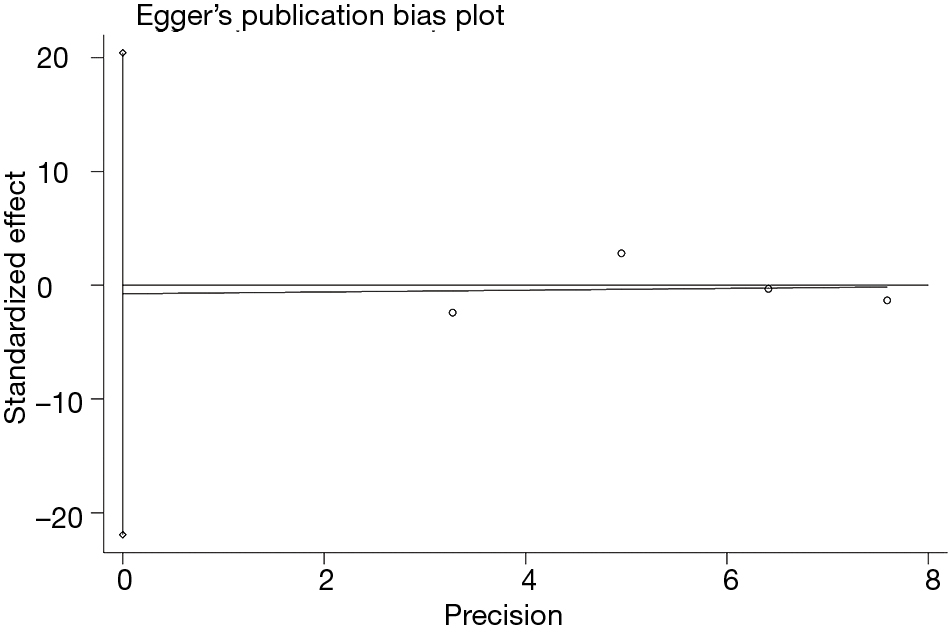 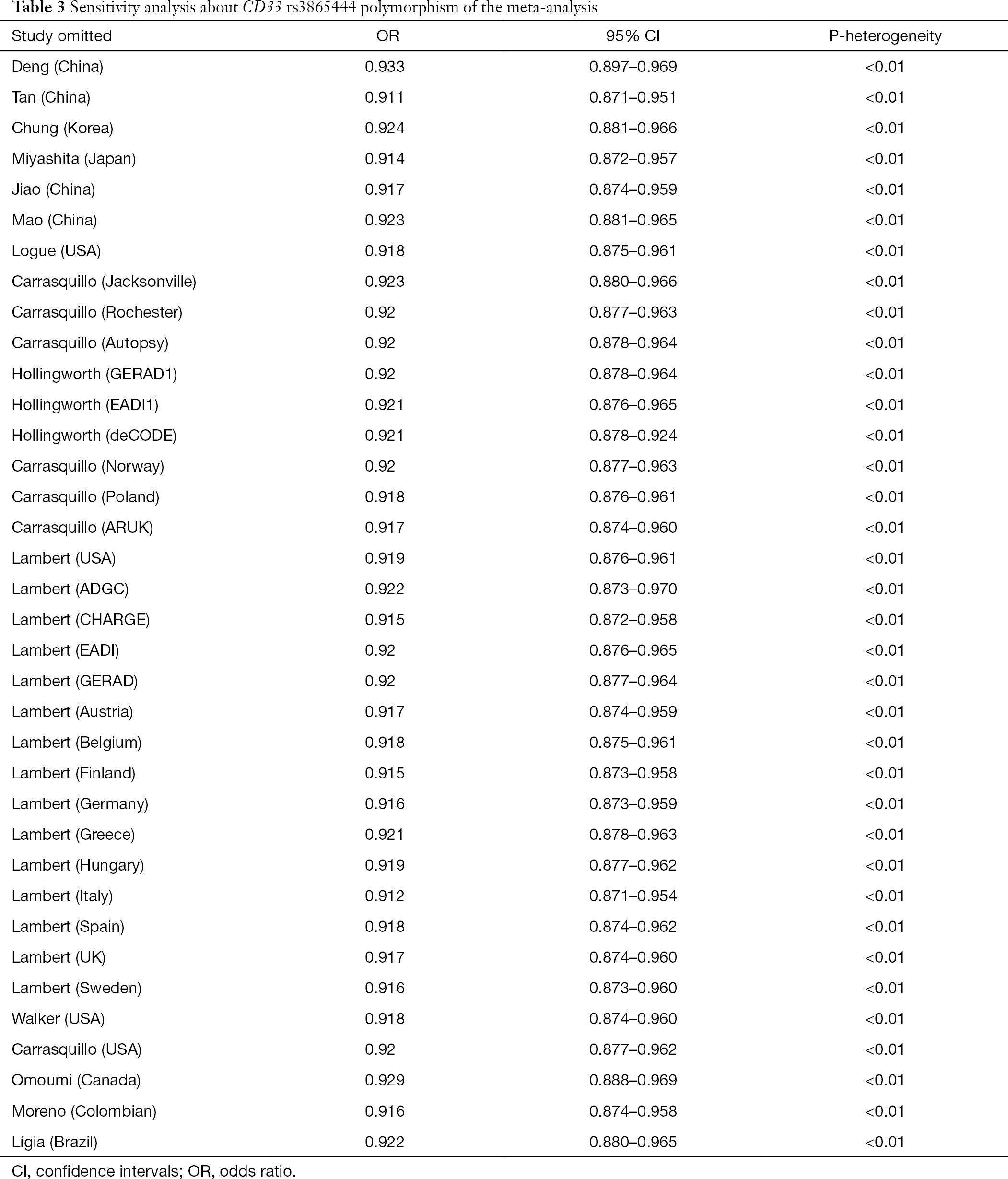 Our meta-analysis summarized the evidence to date of the links between common polymorphisms of CD33 gene and the risk of AD. The variant of rs3865444 was identified to be significantly associated with lower risk of AD, while no correlation was showed of the rs3826656 SNP with the risk of AD. We believe that our findings containing the latest published studies will be meaningful for future genetic studies on AD and CD33 gene, which may be a potential candidate gene for AD susceptibility.

Since July 2011, related studies on the association between the CD33 gene polymorphisms and AD have been carried out all over the world with subjects in different populations, such as Caucasian, Asian and Negro populations. Because of the few number of articles about Negroid, no subgroup analysis on it was done. In China, Tan et al. in 2013 showed that the polymorphism of CD33 rs3865444 was a risk factor for AD (OR =1.442; 95% CI, 1.182–1.759) (17), which was different from results in most Caucasian population. But in China, another study conducted by Deng et al. obtained an opposite conclusion compared with that of Tan et al. (OR =0.48; 95% CI, 0.351–0.655) (20). In 2013, a meta-analysis conducted by Lambert showed the evidence that the variants of rs3865444 were found to be significantly associated with lower risk of AD in Caucasian population (OR =0.94; 95% CI, 0.91–0.96) (30). Considering the inconsistent results, ethnic subgroups were used to eliminate possible ethic differences. As for the polymorphism of CD33 rs3826656, Mao et al. made a meta-analysis in China to identify whether SNP rs3826656 was associated with increased risk of AD (OR =1.39; 95% CI, 1.09–1.76) (31). In order to further harmonize these contradictory findings and to acquire a more accurate conclusion about the two SNPs of CD33 gene, an updated meta-analysis was conducted.

Based on those recent studies on the role of rs3865444 SNP in pooled population, our results showed a significant link between risk allele (A) and lower risk of AD. In a subgroup analysis, the results of the present study in Caucasian population supported that rs3865444 variant had protective association with AD. As predicted, the result was the same as that of the study conducted by Lambert (30). In Asian population, the correlation between rs3865444 gene polymorphism and the incidence of AD could not be determined. We couldn’t agree with the conclusions made by Tan et al. and Deng et al. Besides, there was only one study about the population of Negroid ethnicity with limitation of the sample size, which might not provide sufficient data in Negroid population. Large-scale case-control studies in different ethnicities and regions need to be performed. With regard to rs3826656 gene polymorphism, there was no association between this gene locus and AD, which was different from the result drawn by Mao et al. (31). To our knowledge, our study offers a more systematic and higher-quality evidence to indicate the relationship between two SNPs of CD33 and AD. In addition, we added several new studies which increased the total amount of subjects to raise the accuracy of outcomes. All included studies were published in authoritative journals after 2011, which identified that the research on the CD33 gene polymorphisms were promising and novel.

We have to admit that some limitations in our meta-analysis should be illuminated. There were lots of polymorphisms in CD33, such as rs10419982 (32), rs273652 (22), rs35112940 (33) and so on. Because of lack of researches on these loci, our study, which only concentrated on two polymorphisms of CD33, may not fully represent the function of CD33 gene. A larger range of studies are demanded to reinforce the representation of this gene.

It is likely that the CD33 polymorphism will play an important role on the way to genetic susceptibility in the future. The effective therapeutic interventions for AD are still very limited and, therefore, we hope further research on gene CD33 can offer a specific structural goal for the development of novel therapeutic approaches.

The SNP rs3865444 of CD33 played a protective role in AD, and this protective role still existed in Caucasian population in the subgroup analysis. There were no association between SNP rs3826656 and AD. Further studies with large sample size should be done to confirm our findings.