Alzheimer’s disease (AD) is a common cause for dementia among old people. It could cause progressive cognitive impairment, accumulation of amyloid plaques (AP) and intracellular neurofibrillary tangles (NFTs), and neuronal loss in brain (1,2). The pathogenesis of AD is very complex. A number of studies have suggested that the onset of AD was influenced by genetic risk factors (3). Presenilin 1 (PSEN1), presenilin 2 (PSEN2), and amyloid precursor protein (APP) gene mutations bear responsibility for most familial AD cases (4). The ε4 allele of apolipoprotein E (APOE) is widely recognized for the more common sporadic late-onset AD (LOAD). APOE has been identified as a major transporter of cholesterol both in the blood and central nervous system (5). Based on the role of APOE for the pathogenesis of AD and some other findings, we hypothesized that imbalanced cholesterol levels may influence the risk of AD, and statins and other cholesterol-modifying medications may be useful in AD’s treatment and prevention (6-16).

Chromosome 12p has been recognized as a region associated with AD by Genome-wide linkage analyses. It includes lipoprotein receptor-related protein 1 (LRP1), α-2-macrogobulin (A2M), as well as OLR1 (17). OLR1, a class E scavenger receptor, is a trans-membrane glycoprotein. It could mediate the uptake and internalization of oxidized low-density lipoprotein (oxLDL) (18). In vitro factors such as oxLDL, oxidative stress and inflammatory cytokines, and in vivo proatherogenic stimuli such as diabetes mellitus, hyperlipidaemia, as well as hypertension could induce its expression (19-21). Increased level of oxLDL induces endothelial cell activation, dysfunction, apoptosis and impaired vasorelaxation, thus contribute causally to atherosclerosis development and progression (22-28). Indeed, epidemiologic and clinical literature has consistently reported an association between atherosclerosis, vascular risk factors and AD (29,30). Therefore, it is possible that variations in ORL1 could lead to oxLDL being removed less efficiently, and this, with increased amyloid beta peptide (Aβ) might result in death of neurons (31-33).

MicroRNAs (miRNAs) are 19–24 nt single-stranded RNA molecules. It can down-regulate gene expression through binding to a complementary sequence in the 3'UTR of target genes, thus resulting in translational inhibition or mRNA cleavage and subsequent degradation (34). Clinical and research evidence showed that a number of miRNAs are dysregulated in AD patients and AD animal models (35-39). The single-nucleotide polymorphism rs1050283 (also known as +1073 C/T) located in the 3'UTR of OLR1 may influence its regulator miRNA binding and subsequent protein homeostasis. Several studies have explored the association between OLR1 +1073 C/T and AD. However, the results are inconsistent (17,40-43). Recently, a meta-analysis confirmed the association of OLR1+1073 C/T with a decreased risk of AD among Caucasians (44). Moreover, Papassotiropoulos et al. investigated a cluster of cholesterol-related genes and identified rs1050286 polymorphism in OLR1 conferring significant susceptibility for AD (45). Given the potential importance of OLR1 in the pathogenesis and development of AD, we performed a case-control study consisting of 984 patients with LOAD as compared to 1,354 age-matched healthy subjects among northern Han Chinese, by analyzing the potentially association of three functional SNPs (rs1050283, rs1050286, rs17808009) located in 3'UTR of OLR1 with LOAD in Han Chinese population.

Totally, 984 sporadic LOAD patients and 1,354 healthy controls were enrolled for the study. They were matched for age and sex. The cases came from several hospitals in Shandong Province. All participants were northern Han Chinese. The diagnosis of AD was carried out with standard clinical evaluation in accordance with NINCDS-ADRDA criteria (46). No patients had severe CNS diseases or a family history of dementia. The controls were confirmed healthy and neurologically normal by medical history, general examinations, laboratory examinations and Mini Mental State Examination MMSE (score ≥28). They were enrolled from the Health Examination Center of the Qingdao Municipal Hospital. The present study was carried out with approval by the Institute Ethical Committee of Qingdao Municipal Hospital and with informed consent of all the participants or their representatives. The ID number of informed consent is 2009-05-06-003.

The sequence of probes in SNP scan reaction and sequence for the PCR reaction are available from the corresponding author. The improved multiplex ligase detection reaction (iMLDR) method was used for detection of genotyping of rs1050283 in the OLR1 gene (Shanghai Genesky Bio-Tech Co, Ltd; www.geneskies.com). Primers for rs1050283 are as follows: forward primer: CTTGATTTCGGAATGGCCTCTG; reverse primer: CCTTTGCAGAAACTGGGGTTCC. Data analysis was performed via an ABI3130XL Sequencer and GeneMapper Software v4.1 (Applied Biosystems, USA).

Differences in the characteristics between two groups were assessed with the χ2 test or Student t-test. Hardy-Weinberg equilibrium was examined with the χ2 test. The χ2 test was used to compare distributions of genotype and allele, and was also used to test differences between two groups stratified by APOEε4 status. Differences in allele and genotype distribution between two groups were analyzed with logistic regression adjusted for gender, age and APOEε4 status in several genetic models. The models were defined as 0 (AA + Aa) versus 1 (aa) for recessive, 2 (aa) versus 1 (Aa) versus 0 (AA) for additive, and 0 (AA) versus 1 (Aa + aa) for dominant, (A: major allele; a: minor allele). STPLAN4.5 software was used to estimate statistical power. SPSS 16.0 software was used for data analysis. P<0.05 were considered to have statistical significance. 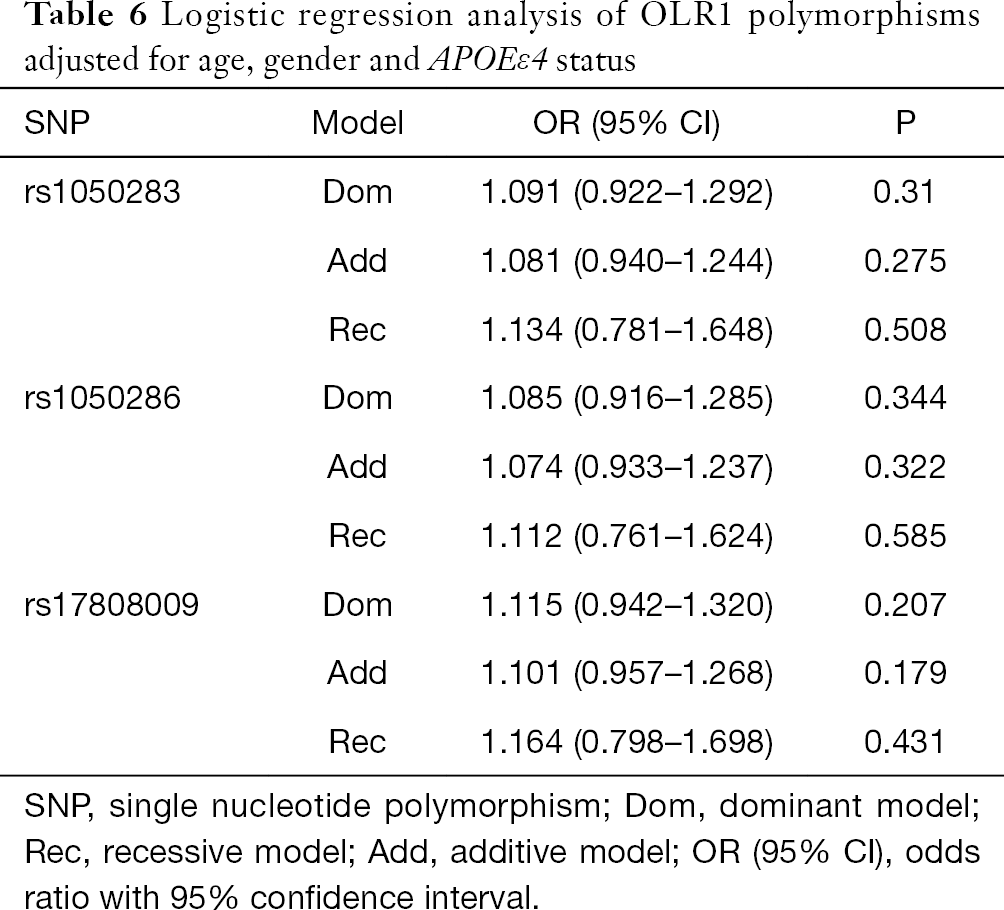 As an endothelial receptor for oxLDL, OLR1 has been suggested to regulate lipid metabolism, and thus being an intriguing candidate gene for AD susceptibility. We sought to determine whether SNPs in OLR1 are involved with AD. In our research, we investigated three SNPs (rs1050283, rs1050286, rs17808009) for miRNA binding sites of 3'UTR in OLR1. Notably, we describe a novel polymorphism rs17808009. However, we are unable to replicate the findings in a case-control sample with adequate power to detect the risk ratio observed in previous studies. No significant differences in the genotypic or allelic distributions of these three SNPs (rs1050283, rs1050286, rs17808009) between LOAD subjects and controls was found in a Han Chinese population, even after statistical adjustment for non-genetic and APOEε4 status and stratification for APOEε4 status.

Previous human genetic association studies of the OLR1 have yielded conflicting results (17,33,40,41,43,47,48). Luedecking-Zimmer et al. (17) found that in APOEε4 bearers homozygosity of the T allele of the ORL1 rs1050283 polymorphism had an elevated risk for LOAD, while in non-ε4 carriers, homozygote of the T allele was over-represented in the controls. On the contrary, Lambert et al. (40) found that the expression of OLR1 was decreased in AD cases carrying the CC and CT genotypes compared with controls with the same genotypes (OR =1.56, 95% CI: 1.19–2.04, P<0.001), which indicated C allele to be a risk factor for AD. This was supported by two other studies (41,43). Recently, a meta-analysis including 2,419 cases and 2,381 controls from five studies demonstrated a significantly lower AD risk in the recessive model (TT vs. TC + CC: OR =0.79, 95% CI: 0.65–0.96), however, they failed to conduct further study to confirm the influence of APOEε4 on the association between rs1050283 polymorphism and AD (44). The results of an independent replication study by Pritchard et al. provided support to our research (48), they performed an association study of rs1050283 in a UK population of 356 LOAD patients and 358 healthy controls, and failed to find any association between rs1050283 and AD, even after stratification by APOEε4 status, onset age and haplotype distributions. In addition, Papassotiropoulos et al. (45) investigated a cluster of cholesterol-related genes and identified rs1050286 polymorphism in OLR1 conferring significant susceptibility to AD, which was inconsistent with our findings. Moreover, there is another SNP site known as +1071 T/A (not included in our study) within the OLR13'UTR, being tested by three groups (40,41,48). However, no relationship was found between the +1071 T/A polymorphism and AD onset risk.

A number of studies have explored the reasons for the frequent failure of candidate gene studies for replication in other cohorts (49-52). Our study failed to detect any association does not mean invalidation of previous findings. There are some explanations. Firstly, the difference between our study and previous research might be due to genetic variability in various ethnic populations, including differences in minor allele and MAF, as well as the complexity of the potential genetic structure (53,54). In Caucasians C allele was the minor allele of the rs1050283 polymorphism with a MAF of 0.482, while in our cohort T was the minor allele with a MAF of 0.238. Our information was similar to those from NCBI database (MAF: T=0.183). Candidate gene studies might differ in the study population and in the definition of the phenotype (55). Secondly, it is possible that our study is under-powered to detect small size effect in the Han Chinese population (56). In fact, our sample had a power of more than 90% to detect these variants with modest risk (MAF =0.25 and OR of ~1.5) at a significant level (alpha) of 0.05. However, we cannot deny that our results could be under-powered in case of weak effects. Thirdly, AD is not only a genetic disease, but also involves environmental components. Therefore, the effects of some SNPs detected by GWAS may vary in different populations owing to some undiscovered interactions between gene and environment (57). Moreover, variations in the clinical characteristics of the study cohort, as well as experimental and statistical methods could have caused statistical bias (58,59). More analyses with independent follow up are required to evaluate these possibilities.

To conclude, we failed to find any significant differences between SNPs (rs1050283, rs1050286, rs17808009) and LOAD in the Han Chinese population. As far as we know, this is the first study aimed at exploring the possible effects of the SNPs (rs1050283, rs1050286, rs17808009) in OLR1 to LOAD in non-Caucasians. Further and larger studies in Han Chinese and other ethnic groups are warranted to assess our results.

Ethical Statement: The present study was carried out with approval by the Institute Ethical Committee of Qingdao Municipal Hospital and with informed consent of all the participants or their representatives. The ID number of informed consent is 2009-05-06-003.