Esophageal diverticulum is a clinical entity associated with esophageal motility disorders. Surgery is indicated in patients with severe symptoms as dysphagia, esophagitis, anorexia, regurgitation and weight loss. Open surgery is the standard strategy but in the last years an increasing number of papers have reported the use of minimally invasive approaches for performing diverticulectomy and myotomy in order to reduce the surgical trauma and favor a fast return to daily activity (1-6). Herein, we describe a novel technique as the surgical treatment of midthoracic esophageal diverticulum using a uniportal video-assisted thoracoscopic surgery (VATS) approach.

All patients were aware of pros and cons of uniportal VATS approach and on the possibility of conversion to thoracotomy; they gave a specific written informed consent. Being uniportal VATS a procedure widely used in thoracic surgery, no specific approval by Institutional Review Board was required for this study.

Under general anesthesia and single lung ventilation, the patient was placed in the supine position. Esophagoscopy aspirated the materials in the diverticulum and a guide-wire was inserted into the stomach under endoscopic view. The patient was then positioned in the left or right lateral decubitus position (according to the site of diverticulum) as for standard posterolateral thoracotomy and the left or right lung (according to the site of diverticulum) was deflated. As previously reported (7), local anesthetic (bupivacaine 10 mL) was injected at level of surgical site five minutes before incision to obtain a pre-emptive analgesic effect. A 3–5-cm incision (Figure 2A) was performed at level of the right or left (according to the site of diverticulum) 7th–8th intercostal space (Figure 2B), and through that a 30° camera and working instruments were inserted without rib spreading (Figure 2C). 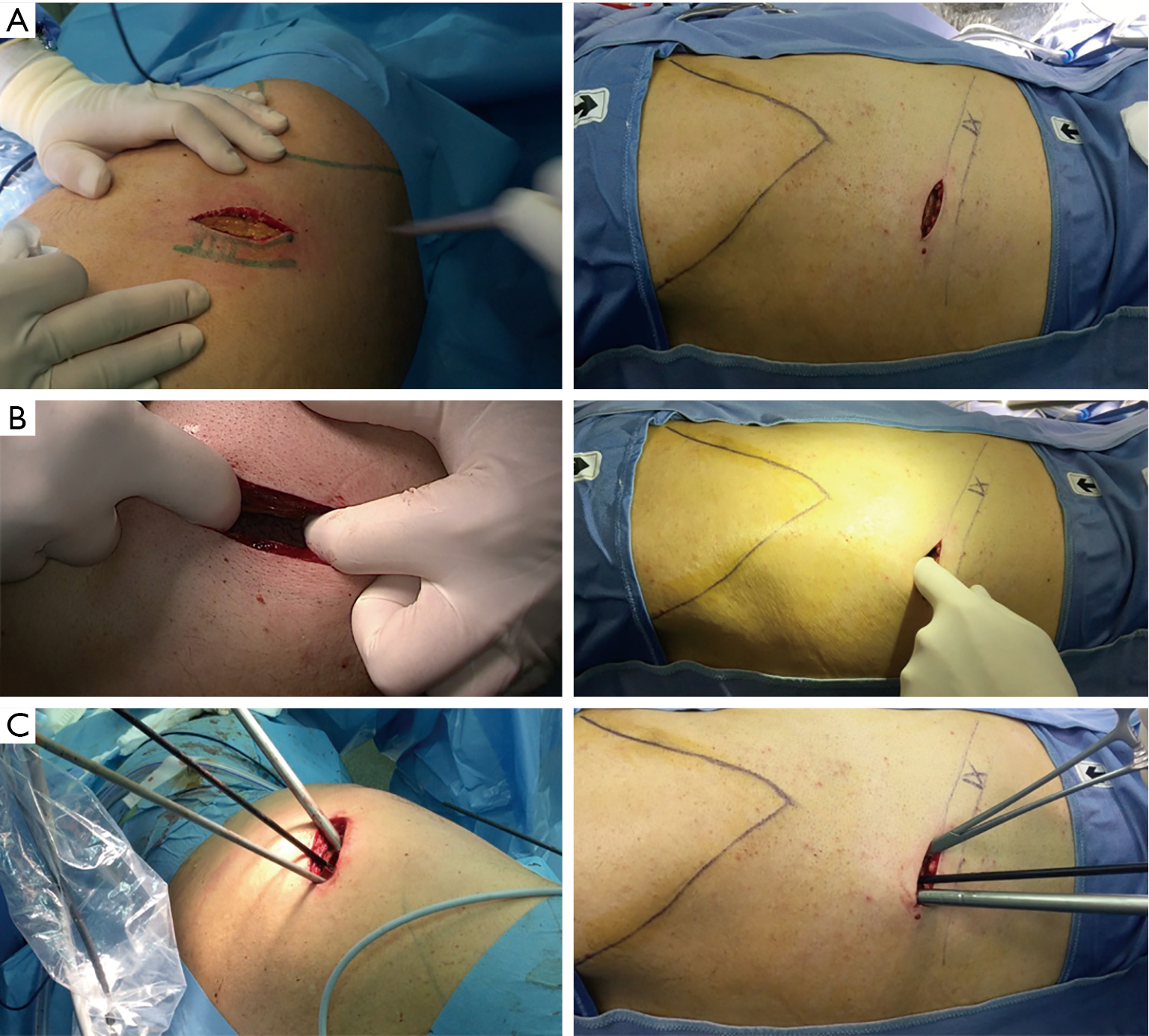 Figure 2 A 3–5-cm incision (A) was performed at level of the 7th–8th intercostal space (B) and through that a 30° camera and working instruments were inserted without rib spreading (C). 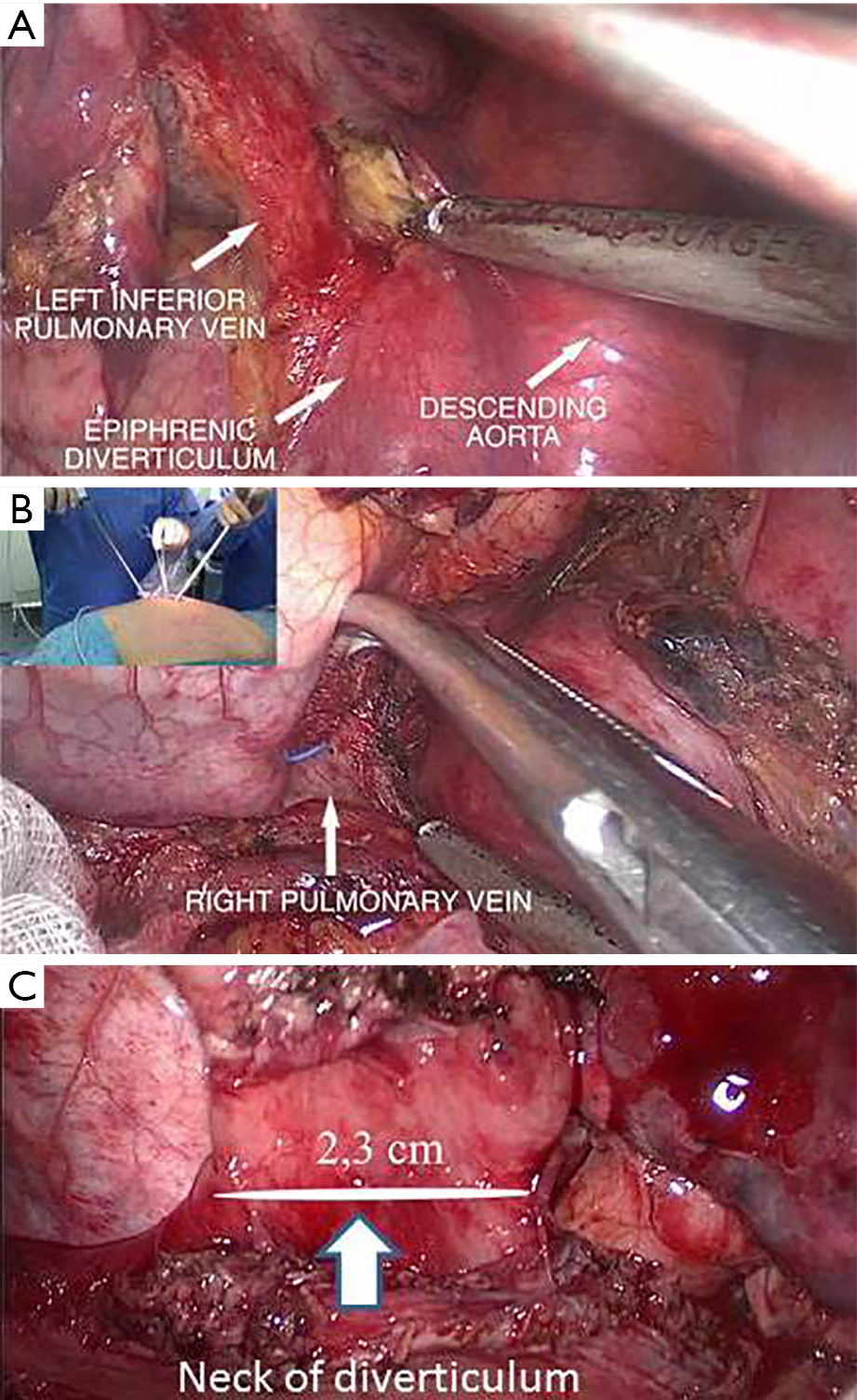 Figure 3 Dissection of mediastinal pleura over the aorta (A) and esophagus (B); complete exposition of diverticulum (C). 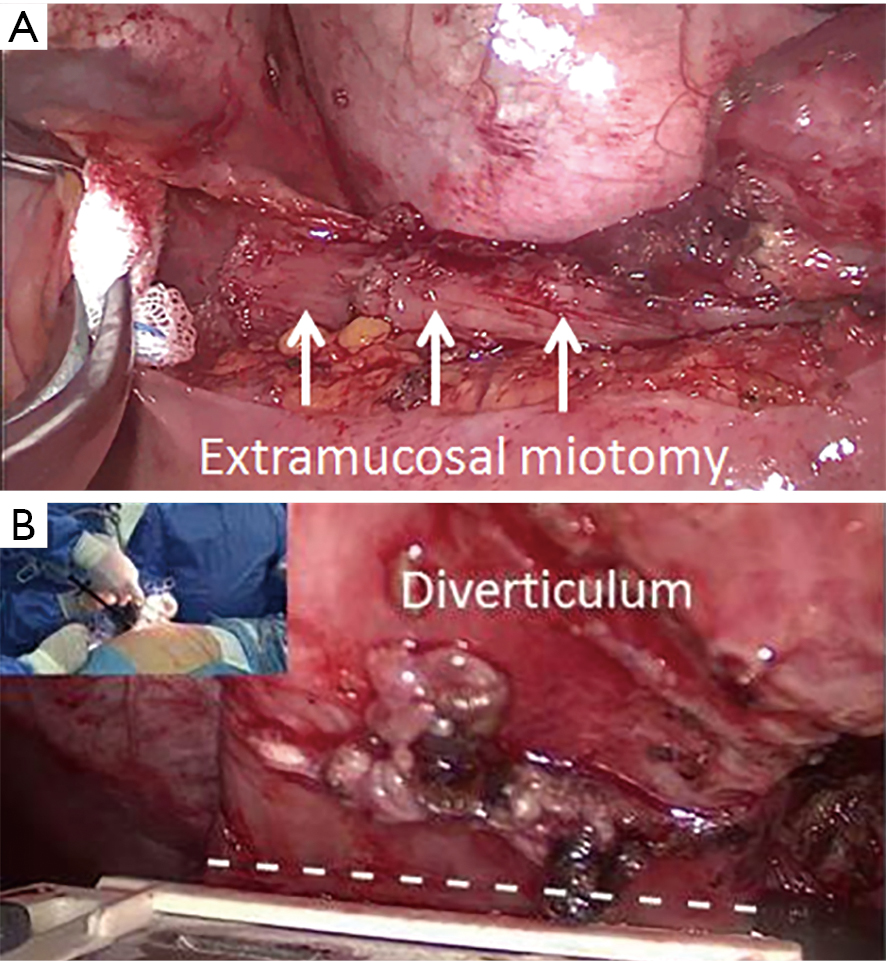 Figure 4 standard extramucosal myotomy (A) was performed and the diverticulum was then stapled at its base with an Endo GIA (B). Dashed line shows the neck of diverticulum. 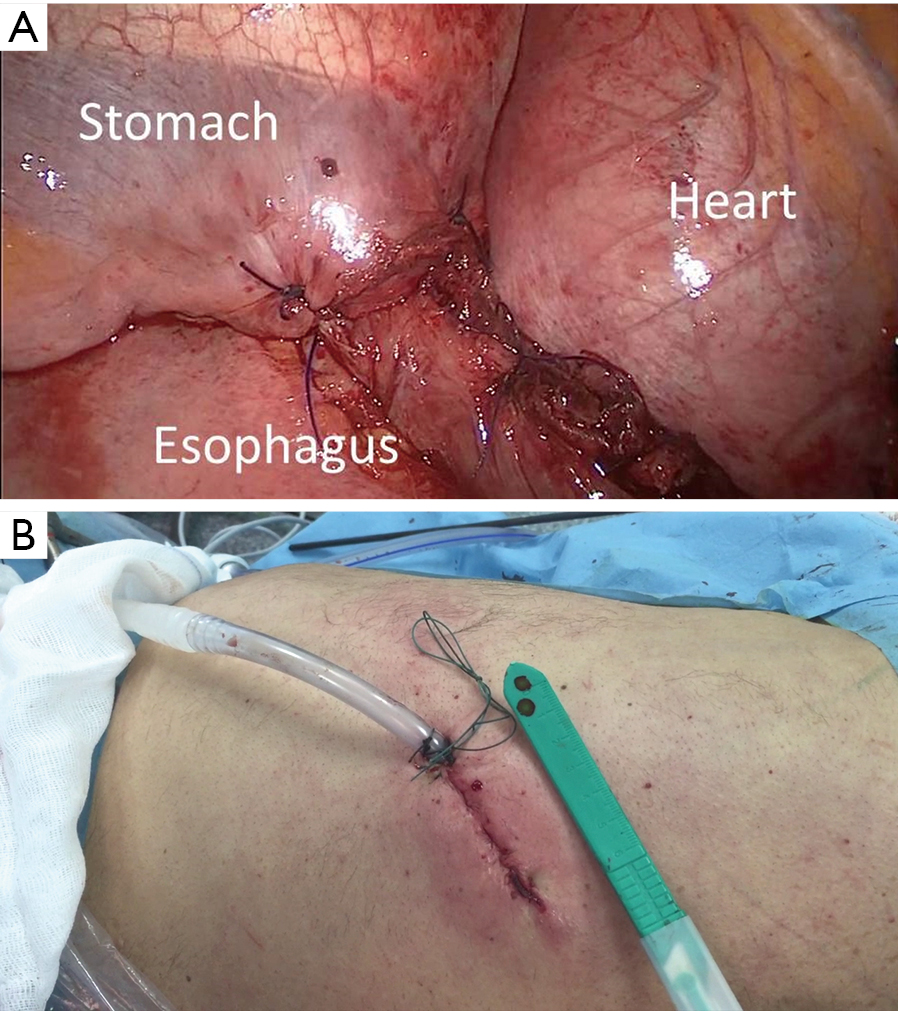 The procedure is similar to that of left diverticulum. The main difference was that a laparoscopic approach was needed to perform a Heller myotomy and anterior partial fundoplication as previous reported (3).

In all cases the procedure was successfully performed without needing of conversion. The mean post-operative time was 121±10 minutes. The chest drain was removed 48 hours later in all cases and the mean length of hospital stay was 9±1 days. No intraoperative complications neither postoperative complications were found in all patients but one. He had a small fistula 15 days later that was successfully treated with stent insertion in another hospital. No recurrence of diverticulum was seen in all cases (mean follow-up: 16±5.5 months).

Open surgery is the treatment of choice in symptomatic patients with large esophageal diverticula. However, in the last two decades various minimally invasive techniques including laparoscopy and VATS have been developed to treat this condition (1-6). Traditional VATS is usually performed with three-four incisions but over the years there has been an evolution of VATS from multi-ports to single port. At beginning, uniportal VATS has been proposed only for minor thoracic procedures, but with the growing experience uniportal VATS has been used also to perform complex thoracic procedures (8-12) and currently there is no-doubt that every thoracic procedure could be carried out with this technique in expert hands. The less surgical trauma, less postoperative acute pain, reduction of length of hospital stay, faster return to daily activity, and better cosmetic results are all well-defined advantages of traditional VATS versus open surgery and in theory they could be also more evident if only one incision (uniportal-VATS) rather than multiple-incisions (standard VATS) are made (13,14).

Several authors (1-6) showed that standard VATS is a feasible and safe technique for performing diverticulectomy and myotomy, but the use of uniportal VATS for this issue remained unexplored. Recently, our group reported the first case of uniportal VATS resection of giant esophageal diverticulum (15) and this procedure was then successfully reproduced in other two patients. Conversely to standard position of uniportal VATS where the surgeon and assistant were placed anteriorly to the patient, in our technique they were positioned behind the patient and had the same surgical view of standard thoracotomy. The working instruments entered into the chest parallel to the camera but with different angulation. It allowed approaching the diverticulum from a cranio-caudal perspective similar to open surgery. Yet, the different angulation between the camera and instruments allows maximal convergence of working instruments from each side of the target lesion without interference (16). Thus, surgeon works with his eyes and hands in the same plane, similarly to the open surgery.

From a technical point of view, the following recommendations should be taken in account for the success of the procedures: (I) the first step is to resect all adhesions between the diverticulum and the mediastinal pleura in order to fully expose the neck of the diverticulum. During this maneuver great care should be taken to avoid lesion of vagus nerve and/or an excessive skeletonization of the esophagus; (II) the esophageal myotomy should be tailored to the specific motility disorder. In presence of diffuse esophageal spasm, hypertensive LES and achalasia, a long extramucosal myotomy, extending proximally for 6–8 cm and distally for 0.5 to 2 cm involving the LES and the gastric cardia, is mandatory to avoid dysphagia (17). During this maneuver caution must be taken to avoid injury to the esophageal mucosa, especially if hook cautery or harmonic scalpel are used (18,19); (III) for the resection of diverticulum, the stapler should be placed at its base, parallel to the long axis of the esophagus but not perpendicular in order to have a regular suture without tension and reduce the risk of leak. In case of tenacious adhesions or heavy calcified lymph nodes, uniportal VATS is contraindicated and open approach should be adopted.

One of three patients presented an esophageal leak that was treated with success with a temporary stent. Suture leakage is one of the main complications of esophageal diverticulectomy that occurred with rate of 15–20% patients after minimally invasive surgery (3,4).

Finally, uniportal VATS is a feasible procedure that in theory could reduce the surgical trauma and the post-operative morbidity and mortality compared to the standard open approach. However, future prospective study should corroborate our impression before it can be recommended as acceptable therapy.

Informed Consent: All patients were aware of pros and cons of uniportal VATS approach and on the possibility of conversion to thoracotomy; they gave a specific written informed consent.