National use of total hip arthroplasty among patients with a history of breast, lung, prostate, colon or bladder cancer—an analysis of the Medicare population

Total hip arthroplasty (THA), is a commonly performed procedure in the United States. Previous studies have estimated that around 600,000 THA procedures are done each year (1). THA provides substantial quality of life, allows return to work, and is commonly employed following fractures (2). It has been proven to improve patient outcomes and to be cost effective (2,3). Recent data has demonstrated that patients with cancer are at increased risk of complications and thus this aspect of arthroplasty has gained more attention (4-6).

A recent annual report from the American National Cancer Institute (NCI), demonstrates that overall, cancer incidence continues to have wide variation but also shows that mortality has decreased in recent years, demonstrating that more of the patients with this condition are living in remission (7). Recent changes in treatment to these cancers, such as stereotactic radiation, systemic targeted treatment, hormonal receptor targeting molecules and novel chemotherapy may have caused an increase in life expectancy and a change in the use of arthroplasty in these patients (8-10). Understanding the utilization of THA among patients diagnosed with a solid organ malignancy is crucial as previous studies have demonstrated worse outcomes in this patient population but not its current national use (11-14).

The purpose of this study was to perform an epidemiological analysis of the use of THA among patients with a diagnosis of a solid organ malignancy.

We conducted a retrospective epidemiological review of the entire Medicare files through the use of the Pearldiver Supercomputer (Warsaw, IN, USA). This technology allows the study of the entire Medicare records from 2005 to 2012 by coding with Current Procedural Terminology (CPT) codes and International Classification of Disease (ICD) ninth revision codes. The five most common malignancies according to the National Cancer were selected for analysis. The selected ones were based on the NCI of the United States, which provides an annual report on cancer based on data from the American Cancer Society (ACS), the Centers for Disease Control (CDC), the NCI and the North American Association of Central Cancer Registries (NAACCR) (7). This data is combined and an annual report is made available to the public. The most recent report is based on data from 1975 to 2012 and describes the top five most common malignancies to be: breast, lung, prostate, colon and bladder cancer, and thus were selected for this study. The ICD code for THA 81.51 was used to determine which patients received an operation. Yearly incidence and growth were studied. Descriptive statistics as well as linear regressions were used to analyze trends over time. An alpha value of less than or equal to 0.05 was deemed as significant. Statistical analysis was performed with SPSS version 20 (IBM, Armonk, NY, USA).

Between 2005 and 2012, 14,145,558 patients were diagnosed with one of the five types of cancer. Results have been separated according to type of malignancy (Table 1). The prevalence of THA among our entire patient population was 0.29%.

Cancer is a devastating disease, and is the second most common cause of mortality in the USA. Recently there have been reports that there are over 14.5 million cancer survivors (CS), which is a number that is expected to rise to nearly 20 million patients by 2024 (15-18). These figures are alarming and demonstrate the success of oncologic treatment, improved screening methods and an aging population among other factors.

With many of these CS achieving significant improvements in quality of life and return to functional activity, the onset of osteoarthritis may continue to present in this subset of patients. Degenerative arthritis combined with systemic inflammation during and possibly after cancer, may play an important role in joint degeneration leading to further requirement of care for such a problem.

Concomitantly with the increase in CS, recent literature has demonstrated that THA is a procedure that is performed over 300,000 times annually and growing significantly (19,20).

Advances in oncologic treatment modalities have led to increased survival of cancer patients (21,22). These patients may require unique preoperative measures to ensure good clinical outcomes. Thus it is necessary to understand the current trends in CS patients undergoing THA. The primary findings of our study demonstrate that THA is performed in less than 0.5% of patients with a primary malignancy diagnosis compared with the normal population which has been recently reported to be around 5% in octogenarians and over 0.83% for the entire US population, even though the number of CS has recently been described as on the rise (22,23).

Our results also show that although the gross number of THA in this population is low, there has been an increased incidence in patients with lung, prostate and bladder cancer, while the incidence of this procedure in breast and colon cancer patients has remained constant (Figure 1). Various reasons may have caused these changes. Patients with malignancy have increased risk of avascular necrosis of the femoral head due to chemotherapy, dexamethasone therapy and vascular injury, creating a hypercoagulability state that may lead to disturbance of the circulation to the femoral head (24,25). This unfortunate state may even be occurring for a prolonged period of time it the diagnosis of malignancy was made at an early age (26). 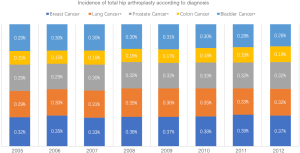 Figure 1 Annual utilization of THA among patients with a primary diagnosis of cancer. * denotes when the annual incidence of this procedure had a significant increase over time. THA, total hip arthroplasty.

Contrary to the constant rate of THA in breast cancer patients found in our study, a retrospective Norwegian registry study of 8,563 THA with a preoperative diagnosed malignancy found an increased THA incidence in breast cancer patients [SIR =1.13 (95% CI, 1.08–1.18)] (27). This is thought to be due to the effects of chemotherapy and aromatase inhibitors increasing the risk of osteoporosis (28,29). However, these studies included a substantially younger age range than our Medicare patient population. Current literature has shown that the incidence rate increases by approximately 8–9% per year during the premenopausal years while slowing to approximately 2–3% per year after menopause (30,31). This may explain the current study findings.

Our data demonstrate that more patients with oncologic diagnosis are undergoing THA, and is expected that these numbers would increase over the following years, which will certainly allow more patients to undergo THA if required, but is important to know that this particular population as previously reported has increased odds of worse outcomes (4,13) such as deep vein thrombosis, pulmonary embolism which has led to certain groups to suggest more aggressive thromboprophylaxis and patient selection in these population (4,14).

Studies have failed to identify the role of malignancy on periprosthetic joint infections (PJI) following THA. A large retrospective study by Pulido et al., analyzed different factors such as patient characteristics (race, comorbidities, ASA classification, body mass index, anemia, etc.), surgical factors and postoperative factors in order to determine the influence of several of these on the development of infection. Although malignancy was not determined to be one of those precipitating factors, anemia, higher creatinine, and longer hospital stay were all found to increase significantly the chances of PJI, which are factors often affecting oncologic patients/CS (11). Contrary to this, Bozic et al. found that metastatic cancer increased the adjusted 90-day hazard ratio (HR) for mortality (HR =3.14) among patients who underwent THA thus demonstrating the value of further analyzing and being vigilant with patients with cancer. This same group of authors also identified metastatic disease as a marker for 90-day TKA morbidity (AHR =4.4) and more significantly also demonstrated that metastatic disease increases the rate of PJI significantly (AHR =1.59) (14,32).

Patients with active or recent oncologic pathology also require special attention. With the limited evidence available of long-term outcomes, it is often difficult to advise these patients on risks specific or increased in that patient population. We hypothesize that with the creation of multidisciplinary groups that include an oncology team, hospitalists, physical therapists and orthopedic surgeons, patients can be optimized before surgery and care plans can be offered in regards to medication use, arthroplasty bearings, post-operative physical therapy and care. We hypothesize that such venture can decrease complications as deep venous thrombosis, pulmonary embolisms and wound discharge or infection. Similarly, a multidisciplinary approach is useful, as prognosis and life expectancy would be factored into the discussion, given that many of these patients, especially the ones with metastatic disease, may have a limited prognosis (33).

Surgical technique is also of great importance. A recent study led by Parvizi et al. demonstrated that patients with a recent history of pelvic radiation for prostate cancer do not have an increased risk of failure after uncemented THA, as the integration of the acetabular component to the pelvis is not compromised. In contrast to this, older studies involving patients with colorectal cancer, gynecological malignancies and lymphoma have identified greater failure of THA in patients who undergo radiation therapy. Thus further evidence is still required to conclude the better technique for this subset of patients (34).

Our study is not without limitations. Our retrospective analysis of the entire Medicare data might have incurred in retrospective bias, thus only allowing this study to be classified as a level of evidence IV study. Another weakness to our study is that we did not account for the indication of the THA nor did we study the complication rates amongst this population. Although these limitations exist, we believe that there is a need for an epidemiological study that evaluates the use of this procedure on a patient population that will continue to grow in the upcoming years according to National statistics, which will allow healthcare policy to include this growing patient population.

THA is not a commonly performed procedure among patients with a primary solid malignancy, with it being performed on less than 1% of patients with these diagnoses. In the recent years there has been an increased use of THA among patients with lung, prostate and bladder cancer, which may be indicative of greater cancer survivorship and better THA efficacy. The use of this procedure on breast and colon cancer patients has remained constant in the past years.