Transcatheter aortic valve replacement (TAVR) has become a standard of care for severe aortic stenosis patients, with intermediate, high or prohibitive risk for surgical aortic valve replacement (1). Smoking is an established risk factor for the development of cardiovascular diseases and has been shown to accelerate the progression of aortic stenosis (2). Interestingly, data exists supporting better survival outcomes in smokers compared to no-smokers with cardiovascular diseases and after cardiovascular interventions (3,4). This thought-provoking observation has been termed as the “Smoker’s paradox.” While smoking related diseases such as chronic obstructive pulmonary disease has been associated with adverse clinical outcomes in patients undergoing TAVR, to the best of our knowledge there is no existing literature on the impact of smoking on in-hospital mortality in patients undergoing TAVR. Therefore, we analyzed the Nationwide Inpatient Sample (NIS) database from 2011–2012 to determine the association of smoking status with in-hospital clinical outcomes in TAVR patients.

All TAVR admissions between January 1, 2011 and December 31, 2012 were identified in the NIS database using the International Classification of Diseases, ninth edition, and Clinical Modification (ICD-9-CM) codes (35.05, 35.06). The study protocol was exempted from review by the Institutional Review Board of the University of Tennessee Health Science Center, Memphis. Baseline patient demographic characteristics (age, sex, and race), and comorbidities (as listed in Table 1) were extracted from the NIS database. Our outcome measures included all-cause in-hospital mortality, defined as “died” during the index hospitalization in the database, acute cerebrovascular accidents (CVAs) (CCS-109) and post-procedure hemorrhage (identified using ICD-9 CM codes-998.11, 998.12, 285.1, 568.81). Baseline patient demographics and comorbidities were compared using Pearson’s Chi-square test for categorical variables and Student’s t-test for continuous variables. In addition to patient demographics and comorbidities, smoking was used as an independent variable in a multivariable unconditional regression model to examine predictors of primary and secondary outcomes. Statistical analysis was performed using SPSS 23.0 (IBM corp., Armonk, NY, USA). We used a 2-sided P value of <0.05 to identify statistical significance. 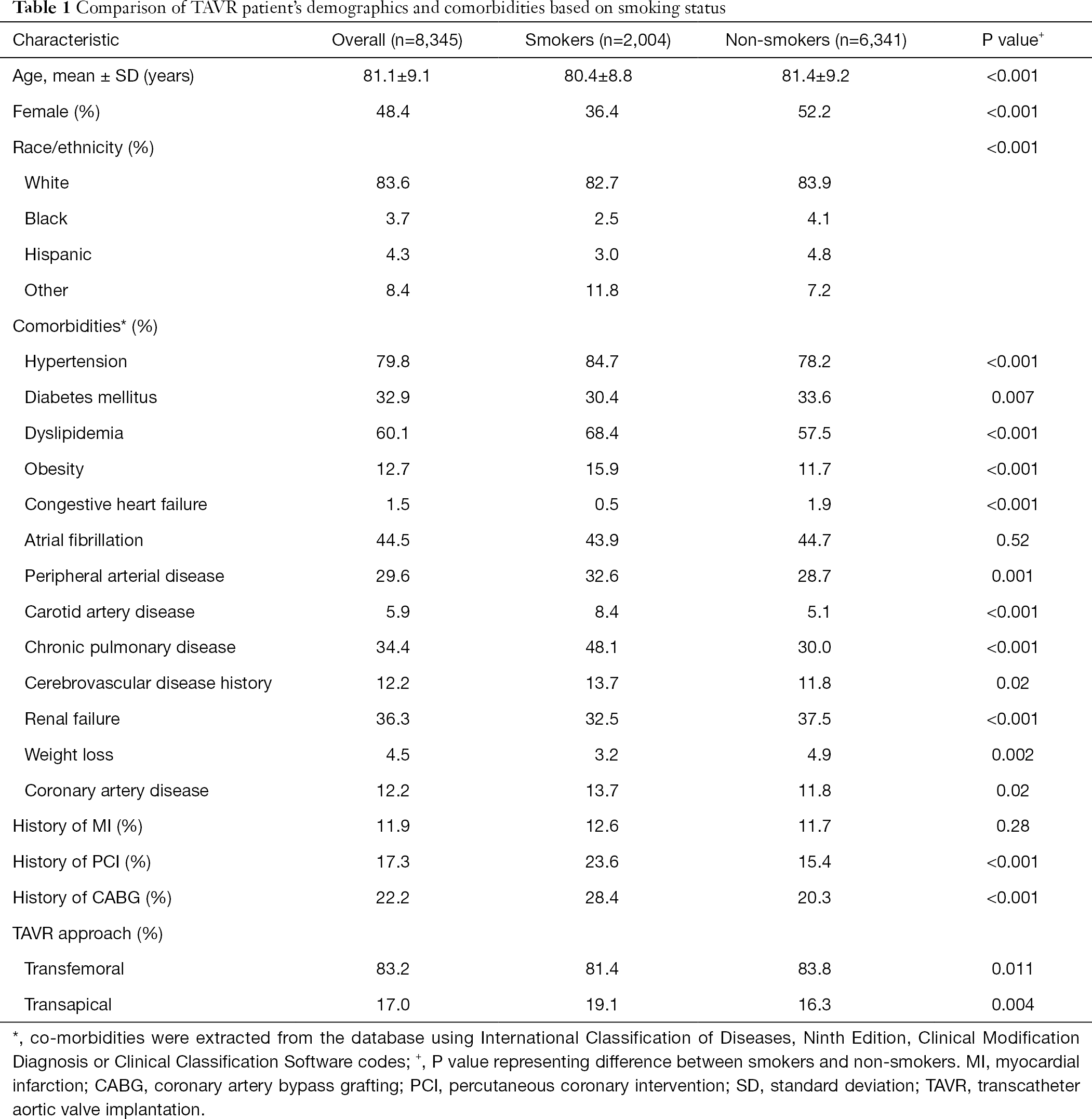 Among the 8,345 patients who underwent the TAVR procedure, 24% were smokers (n=2,004) and 76% were non-smokers (n=6,341). The mean age of the overall study population was 81.1±9.1 years, with 51.6% being male and 83.6% being Caucasian. Patient demographics and comorbidities are listed in Table 1. Smokers were more likely to be male, younger and had higher prevalence of hypertension, dyslipidemia, obesity, coronary artery disease, peripheral arterial disease and chronic pulmonary disease than non-smokers. The prevalence of hypertension, hyperlipidemia, obesity, peripheral arterial disease, carotid artery disease, coronary artery disease, cerebrovascular disease and chronic obstructive pulmonary disease, was higher in smokers than non-smokers (all P<0.001). Smokers were less likely to have congestive heart failure and renal failure (all P<0.001). Despite having a higher prior medical history of CVA, smokers compared to non-smokers were less likely to have acute CVA (2.8% vs. 3.1%), post procedure hemorrhage (28.2% vs. 32.0%) or in-hospital death (1.2% vs. 5.7%, adjusted OR 0.21, 95% CI, 0.13–0.32) (Table 2).

We observed that smokers had lower in-hospital mortality and adverse clinical outcomes compared to non-smokers. This observation was valid even after multivariate adjustment for patient demographics and comorbidities. Hence, we concluded that smoker’s paradox does exist in TAVR patients.

Currently there is no data on the interaction between smoking and TAVR. In patients undergoing surgical aortic valve replacement, Saxena et al., reported no worse perioperative clinical outcomes in smokers when compared to non-smokers in a study based on Australian and New Zealand Society of Cardiac and Thoracic Surgeons (SCTS) Cardiac Surgery Database Program (5). Similarly, another single center study reported no effect of smoking status on post-operative risk in patients undergoing valve (6). Other studies analyzing the impact of smoking on survival after cardiovascular events such as myocardial infarction, stroke, percutaneous coronary intervention and thrombolysis have previously reported findings supporting the smoker’s paradox (3,4). Generally, better survival in smokers has been related to factors such as younger age and lesser comorbidities (3). Nevertheless, we found a strong residual survival benefit in smokers even after multivariate adjustment for multiple factors including age and comorbidities. Hence, lower mortality in smokers in our study may be due to unmeasured confounding, or possibly a protective association.

It is critically important to emphasize that this paradoxical association of smoking with favorable survival in TAVR should not be seen as encouragement for smoking. These results suggest a strong association between smoking and in-hospital adverse clinical outcomes in TAVR, but these results do not assume causation. Also, extensive literature supports that smoking is an established risk factor for the epidemiology of CV diseases, as well as its morbidity and mortality. However the existence of smoker’s paradox deserves attention and needs further research to better explain the mechanism(s) behind this interesting observation.

The main strength of our study is a large nationalized unselected sample size. However, lack of clinical information because of the administrative nature of the database along with the possibility of coding errors should be noted. In addition, we did not have any information regarding smoking status (former or current), number of pack years, and medications patient were using at the time of admission, procedure, and discharge. Finally, NIS is limited to in-hospital events and consequently, no information relating to long-term effects is available.

Ethical Statement: The study protocol was exempted from review by the Institutional Review Board of the University of Tennessee Health Science Center, Memphis.