Surgical treatment of liver metastases in patients with neuroendocrine tumors

After the lymph nodes, the liver is the predominant site for NETs metastases. Synchronous liver metastases present in 75-80% of patients, which is a key adverse prognostic factor. When it is feasible, aggressive surgical management of both the primary tumor and the liver metastases improve overall survival rates extensively (4-6). Primary hepatic neuroendocrine tumors are extremely rare, and are diagnosed by exclusion of other primary tumors. As with metastases, the main treatment of primary hepatic NETs is surgical resection (7,8).

RFA is a palliative option aiming at debulking and controlling hormonal symptoms. Accordingly, Laparoscopic RFA was suggested when other treatment modalities including chemotherapy, somatostatin analogues, chemoembolization, and resection failed. Akyildiz et al. reported one of the largest prospective experiences with radiofrequency ablation of neuroendocrine liver metastases. Akyildiz recommended selection criteria for this study include maximum tumor size of 10 cm, maximum number of tumors of fifteen, and less than 20% liver involvement. Symptom relief was achieved in 97% of all patients treated with laparoscopic RFA (9). Additionally, Berber et Siperstein demonstrated that there was no significant increase in the morbidity with repeat ablation cases. This supports the concept that laparoscopic RFA can be performed in a repeated fashion in the case of recurrence (10).

In addition to histopathological analysis and clinical assessment, biochemical profile plays a major role in the NETs diagnosis. Serum 5-hydroxyindoleactic acid (5-HIAA) a product of serotonin breakdown can be measured in a urine sample obtained over 24 hours, it is highly specific for NETs. However, 5-HIAA levels insensitivity necessitate measurement of other circulating peptide hormones such as Chromogranin A, Chromogranin A is 100% specific and highly sensitive marker for NETs (11-13). On the other hand, specific tumors are characterized with specific hormones such as pancreatic insulinoma, which is associated with elevated levels of Insulin and c-peptide; this is true as well in case of gastrinoma and Gastrin. Other markers are common to all NETs, such as synaptophysin, neuron-specific enolase (NSE) and calcitonin (4,14,15).

Imaging techniques have a significant role in the diagnosis and management of patients with liver metastases, this includes somatostatin receptor scintigraphy, CT scan and MR imaging. These techniques help in detecting the presence of liver metastases estimating the mass characteristics, distribution, and location to major vessels. Unfortunately, all of these techniques were unsuccessful to identify undersized liver metastases (i.e., tumors <0.5 cm in diameter).

This discussion focuses on surgical treatments of NETs liver metastases and examines all forms of surgical resection, as well as liver transplantation.

Aggressive surgical resection increases the 5-year survival of NETs with solitary liver metastasis to 100%. Where disseminated metastatic NETs suffer a 51% 5-year survival rate after surgical resection (19). Multiple factors including primary tumor site, histological grade and metastatic sites other than liver play a major role in the overall survival (20,21). The surgical approach used depends on the distribution of metastases. In unilobar metastasis, resection of the primary tumor and liver metastasis can be completed synchronously, while bilobar metastasis often requires incomplete left lobe resection and right portal vein ligation, followed by right lobe resection in a two-step approach (22).

Resection of the primary tumor and the adjacent mesenteric lymph nodes confer significant increases in the survival rate. The principle concern over aggressive surgery is patient safety, hepatectomy in conjunction with abdominal resections can be associated with significant morbidity and mortality especially synchronous pancreatectomy (23). Improved survival has been reported by Hill et al. when liver resection is coupled with pancreatic NETs resection. However this study has been criticized for significant selection bias (24).

Significant reductions in biomarkers are associated with symptoms relief and disease control. However, in case of multiple non-resectable hepatic metastases, no clinical trial advocates surgery over other modalities. Additionally, disease recurrence was reported after hepatic metastasis resection (25).

Operative management with SSAs is indicated to avoid intra and post-operative carcinoid crisis. This is especially critical in the case of metastatic functioning tumors often characterized by carcinoid syndrome (26).

Prophylactic cholecystectomy during abdominal exploration is indicated in NETs patients with liver metastases. This strategy is indicated to avoid gallstones associated with somatostatin long-term treatment, and prevent gallbladder necrosis due to hepatic artery embolization for liver metastases (27).

Laparoscopic liver resection has become the preferred surgical approach for many surgeons because of shorter operative time, decreased blood loss, and lesser blood transfusion, moreover, overall hospital stay was also drastically reduced, proving an earlier improvement and resumption of physiological functions (30-32). This is most notable in obese patients. Secondly, laparoscopic hepatectomy has been shown to be oncologically sound with equivalence to open surgery (32).

In laparoscopic liver resection the surgeons should maintain positions on opposite sides of the patient. In the case of left-sided tumors, the primary surgeon is on the patient’s right side. This position allows the primary surgeon to place his right hand under the left lateral segment, which allows inferior retraction of the liver for incision and division of the coronary attachments. The hand-assist device is inserted in the right midabdominal quadrant adjacent to the midline port (Figure 1). During right hepatic resections, hand-assist port placement is in a more superior and lateral position, and the surgeon is positioned on the patient’s left side and inserts his left hand (Figure 2). Selective vascular isolation is achieved through the stapler hepatectomy. During resection, the liver capsule is incised and the thickness of the parenchyma reduced with an ultrasonic dissector or tissuelink device (Figure 3). Once the initial 2 cm of the parenchyma is incised, the remaining resection is completed with an endovascular stapler. Homeostasis is subsequently achieved with an argon beam and completed with the use of biologic glues. 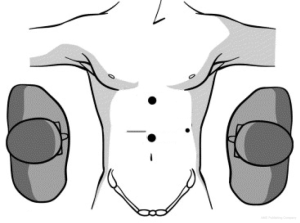 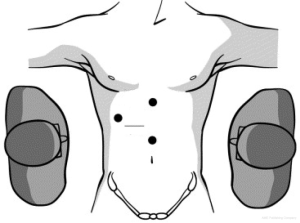 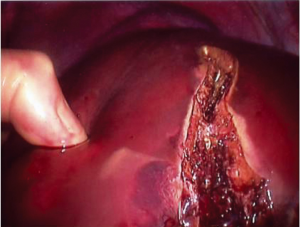 Recently, we have published our experience comparing laparoscopic to open liver resection for the management of NET liver metastases. Laparoscopic liver resection has a lower recurrence rate, 27% at mean interval of 14 months compared to 47% at a mean interval of 15.9 months in open resection. Laparoscopic resection has shorter operative time and hospital stays. The overall 3-year survival and 3-year disease free survival rate for the laparoscopic group 100% and 73.3%, respectively. Complications were lower in laparoscopic group compared to the open surgery group. In addition, laparoscopic surgery is considered safe and feasible in case of major, minor, atypical and even redo hepatectomy. However, metastases should not be more than four in number, and not require an extended hepatectomy to achieve negative margins (33).

The primary tumor and lymph nodes must be resected before liver transplant. This will help to evade the high perioperative risks related to coupling of pancreatic or intestinal resections with the transplant operation (36,38). Furthermore, earlier primary tumor resection helps determining histopathological characteristics of the NET including Ki-67 index, and degree of differentiation, which are significant to patient selection for transplantation. Patients selection criteria includes patients with low grade tumor, G1, ten-percent or less Ki-67 index and 2 or less mitoses per high-power field (39).

Even though Chemotherapeutics, arterial embolization, and aggressive surgery for recurrent tumor may improve the survival rates (42), given the demand for donor organs and the need of fair selection criteria, liver transplantation is controversial (41).

There are a number of surgical options available for the treatment of NETs liver metastases. The choice of treatment depends on the symptoms, distribution of the metastases, and the histological features of the tumor. Nevertheless, there is no evidence-based data comparing surgery versus other liver-directed treatment options such as thermal ablation techniques, embolization, and somatostatin analogues in the management of patients with metastatic NETs. The future appears more encouraging with variable treatment options. Although aggressive surgical resection remains the gold standard for management, the laparoscopic option by experienced laparoscopic liver surgeons can be safe, feasible and provides earlier recovery and fewer complications. However, patients should be managed under the supervision of a multidisciplinary team to guarantee that all treatment options are explored both at diagnosis and follow-up.

Disclosure: (I) All financial and material support for this research and work was fully supported by Tulane University and Tulane University Hospital; (II) The authors have no financial interests in companies or other entities that have an interest in the information included in the contribution; (III) Additionally, there are no other conflicts of interest to report.