One general concern about lung cancer screening with LDCT is the potential harm associated with exposition to ionizing radiations employed in the LDCT screening test and in some investigations commonly used for work-up of suspicious lesions discovered at LDCT. These include follow-up with LDCT, 2-(18F)flu-2-deoxy-D-glucose positron emission tomography (FDG-PET) alone or combined with CT for attenuation correction (FDG-PET/CT), contrast-enhanced or unenhanced full-dose CT and CT-guided fine needle aspiration (FNA) or core biopsy, representing up to 22.6% of the overall radiation dose in a LDCT screening program (5). In particular, overall ionizing radiations exposure associated with the LDCT screening procedure may imply an increased incidence of solid cancers and leukemia.

The study by Rampinelli et al. recently published in the BMJ (6) significantly adds to previous risk-benefit analyses of LDCT lung cancer screening (5,7-11). The study is based on the detailed calculation of the radiation dose in a population of volunteers recruited in the COSMOS observational (one arm) LDCT study in Italy, who underwent annual LDCT screening for 10 years that represents one of the longest screening period. As in previous studies, the cumulative radiation dose in terms of effective dose (12,13) was then used to compute the lifetime attributable risk of cancer incidence based on the Biological Effects of Ionizing Radiation VII (BEIR VII) report (14).

In particular, 5,203 participants (66% men and 34% women) aged 50 and older, who were current or former smokers (≥6% men and 34% women) underwent 42,228 LDCT and 635 FDG-PET/CT scans over 10 years. Individual and cumulative radiation exposure from LDCT and FDG-PET/CT scans were calculated by dosimetry software. The median cumulative effective dose at the 10th year of screening was 9.3 mSv for men and 13.0 mSv for women. According to participants’ age and sex, the lifetime attributable risk of lung cancer after 10 years of CT screening ranged from 5.5 to 1.4 per 10,000 people screened, and the lifetime attributable risk of major cancers from 8.1 to 2.6 per 10,000 people screened: in women aged 50–54, the lifetime attributable risk of lung cancer was about four-fold and the risk of major cancers three-fold higher than for men of 65 years and older. The calculated numbers of lung cancer and major cancer cases induced by 10 years of screening in the COSMOS study cohort were 1.5 and 2.4, respectively, which corresponded to an additional risk of induced major cancers of 0.05% (2.4/5,203). In 10 years of screening 259 lung cancers were diagnosed in the COSMOS study. Hence one radiation induced major cancer would be expected for every 108 (259/2.4) lung cancers detected through screening. The Authors concluded that “radiation exposure and cancer risk associated with lung cancer LDCT screening are not negligible, but are acceptable due to the substantial mortality reduction obtained with screening”.

Risk-benefit analyses that focus on the balance between number of radiation-induced cancers and number of potentially treatable lung cancers discovered by LDCT screening are based on a series of assumptions. Moreover several factors that influence the analysis are continuously modifying the scenarios.

While the benefit of LDCT screening is being defined (2-4), the risk of radiation induced cancer is not established and controversial (8,15).

In NLST the LDCT screening test involved an approximate dose of 2 mSv, whereas full-chest CT scanning that was the major diagnostic study used to follow up nodules, involved a dose of about 8 mSv (11). However, the average individual effective dose associated with LDCT test and other procedures used for diagnostic-work up in two Italian studies (in which LDCT was used for follow-up of suspicious nodules) was lower and in the range between 0.9 and 1.7 mSv per year (5,6).

Notably, the models for estimates of radiation-induced cancers are based on the dose measurements and observational data about cancer incidence in two cohorts. The first is represented by atomic bomb survivors entailing single exposure to high doses (12-14). The second is constituted by nuclear energy industry workers receiving continuous low-moderate doses for a cumulative amount in the range of 100–600 mGy that corresponds to 100–600 mSv since absorbed dose was largely due to external irradiation (16,17). Hence the estimates refer to radiation doses which are about 100 to 600 times higher than those associated with both single LDCT screening test and the above average individual dose in participants to LDCT screening studies. The estimates of radiation-induced cancers proposed by different Institutions for a given effective dose are not identical (5).

Moreover, the cancer risk from low-level radiation such as that used for diagnostic radiology procedures has been extrapolated by the above observations obtained at moderate and high doses using a linear no-threshold relation between the radiation dose and the risk of cancer (15). However, based on observational, experimental, and radiobiological data, the possibility that the linear no-threshold relation underestimates or overestimates the cancer risk from a low radiation dose, the presence of a dose threshold below which the risk is 0, and even a possible protective effect of low-radiation dose against cancer (so-called hormetic response) should also be considered. When, cautiously, a linear no-threshold dose-risk relation is adopted, other assumptions are necessary for some variables that can modify the dose–risk theoretical relationship including age at exposure, the temporal profile of the exposure and the latent period between exposure and increased cancer incidence.

In particular, the risk of low-dose radiation-induced cancer incidence generally decreases with advancing age. It is noteworthy, however, that the risk of radiation-induced lung cancer is different with a peak at 50–60 years of age (8). An acute exposure is associated with higher risk of cancer than that of protracted exposures of the same total dose (8). Notably, data in airline crew did not show an excess of cancer incidence (except skin cancers) and of mortality despite a continuous exposure to low dose radiations in the range of 2–5 mSv per year (18,19). Finally, the latent period between radiation exposure and cancer death increases with decreasing exposure, and it is possible that for low doses the latent period exceeds the normal life span (15).

Several factors can profoundly modify the risk-benefit scenarios, including the individual risk profiles, the methodology of screening procedure, and the CT technology and technical options (Table 1).

The benefit and potential harm of LDCT lung cancer screening are fundamentally linked to the individual profiles concerning, on the one hand, the probability to develop lung cancer and, on the other hand, the susceptibility to cancerogenic effects of ionizing radiations. Accordingly, a greater risk of lung cancer is associated with smoking history and age and additional factors as asbestos exposure, while the role of gender in modifying the risk is probable but currently undefined. The risk of radiation induced cancer is inversely proportional to the age at exposure and is greater for women (14). The complex interplay among age, smoking history and gender on the risk-benefit estimates for three levels (10%, 20% and 30%) of lung cancer mortality reduction associated with LDCT screening is exemplified in Figure 1. Not surprisingly, the harm of cancer development may outweigh the benefit of lung cancer detection in case of young (below 55 years of age) non-smokers, especially if women (10). This fully justifies efforts in the a priori identification of the subjects who are likely to benefit from LDCT through risk prediction modelling and of subjects to whom screening should not be offered.

So far lung cancer LDCT screening studies were generally performed by inviting participating subjects to annual LDCT for a variable period (number of annual screening rounds). The optimal duration of active screening is not established and may theoretically extend to life-time (8,11). In such a case it was estimated from the NLST data that a 55-year-old lung screening participant may experience a cumulative radiation exposure of up to 280 mSv over a 20-year period and 420 mSv over 30 years (11). These exposures are in the range of those of nuclear workers and atomic bomb survivors.

However, alternative designs have been explored including extending the interval between LDCT rounds to 2 years (20,21) and even obtaining one single (one shot) LDCT round (22), both contributing to substantially decrease the radiation exposure.

As mentioned above the management of suspicious lesions in LDCT screening is variable and usually entails choice among short (1 or 3 months) follow-up LDCT, FDG-PET, FDG-PET/CT, contrast-enhanced or unenhanced full dose CT, CT-guided diagnostic FNA or core biopsy, which are associated to additional radiation exposure.

Ultra-low-dose CT (ULCT) enabling reduction of the radiation dose to 1/10 of that of LDCT has been developed by applying new iterative reconstruction algorithms. ULCT was recently applied to lung cancer screening (23).

The incidence of breast cancer rates associated with different types and amount of radiation exposure and temporal profile of the dose exposure was measured in a 15–30 years range of follow-up from eight different large cohorts, none of which within breast or other screening settings (24). The results supported the linearity of the radiation dose response for breast cancer and suggested that the risks for acute and fractioned high-dose-rate exposures were similar, whereas effects from low-dose-rate protracted exposures were much lower.

Lung cancer screening with LDCT has been initiated since almost 20 years in Japan (25). Hence, theoretically, based on the latency period estimates of radiation induced cancer (14), individuals screened in the 1990s may have entered the period of actual development and manifestation of radiation induced cancers. Differently from observational studies, RCTs of LDCT lung cancer screening are intrinsically capable to provide real data about the incidence of an excess of radiation induced cancers, especially if the control population undergoes usual care rather than chest X-rays. Remarkably this excess would translate into an increased incidence of lung cancers in the screened population and ultimately a higher risk-benefit ratio. In this perspective, hopefully pooled analysis of the incidence and mortality data in the screened vs. control cohorts in RCTs of lung cancer screening with LDCT is worthy. In the meantime it is of potential interest that follow-up data in the ITALUNG RCT demonstrated that after 6 years since randomization, the 1,406 actively screened subjects began to show a lower cumulative incidence of lung cancer as compared to the 1,593 controls undergoing usual care (Figure 2) (4). Obviously, both longer follow-up and greater sample sizes are necessary to confirm this observation, as well investigation of the incidence of other cancers beside those of the lung and in particular breast cancer. However, this preliminary observation seems reassuring and may open the way to solve the issue of risk of radiation induced neoplasms associated with LDCT screening of lung cancer with collection of real incidence rather than projection data based on risk/benefit modelling. 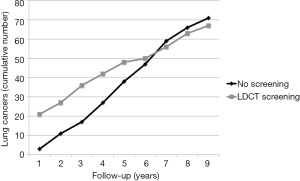 In conclusion the study by Rampinelli et al. (6) represents a valuable advance to the traditional way to address the issue of potential radiation induced cancers in LDCT screening that is to perform risk-benefit model analyses. In fact it was based on the detailed computation of individual radiation exposure using dedicated software and on a long screening period. The data confirm the successful efforts of the industry and radiologists to contain radiation dose in LDCT screening of lung cancer according to the “as low as reasonably achievable” (ALARA) principle of dose containment. Cancer incidence and mortality follow-up data of RCT investigating efficacy of LDCT screening of lung cancer are expected in the next years to provide real vs. projection data about the putative risk of radiation induced cancer associated with the LDCT screening procedure.