A rare and particular form of goiter to recognize

Dyshormonogenetic goiter (DG) is a rare entity that affects 1 in 30,000 to 50,000 live births, and it is the second most common cause (10% to 15%) of permanent congenital hypothyroidism (1). It is a genetically determined thyroid hyperplasia due to an enzyme defect in thyroid-hormone synthesis. It is morphologically characterized by architectural and cellular pleomorphism that may mimic thyroid malignancy and cause difficulties in differential diagnosis.

We report a case of a 37-year-old male patient with history of hypothyroidism since the age of 6 years treated by L-thyroxin 800 microgram per day. The patient’s brother had undergone five years ago a thyroidectomy for a multinodular goiter lasting from childhood. He presented with a voluminous multinodular goiter with tracheal compression causing dyspnea. Computed tomography scan showed a multinodular plunging goiter at the right cervicothoracic space coming in contact with the aortic arch with displacement of the trachea and vessels in the left side.

A total thyroidectomy was performed. Gross examination revealed an enlarged and multinodular thyroid gland, presenting hemorrhagic changes in the larger nodules (Figure 1). Histologically, the process was diffuse, without normal thyroid tissue. The nodules were markedly cellular exhibiting a variety of architectural appearances with microfollicular, trabecular and solid patterns (Figure 2). The follicular cells typically exhibited severe cytologic atypia, including bizarre and markedly enlarged, hyperchromatic nuclei (Figure 3). These nuclear changes were most common in the inter nodular areas. There was no capsular or blood vessel invasion. These features were consistent with dyshormonogenetic goiter. 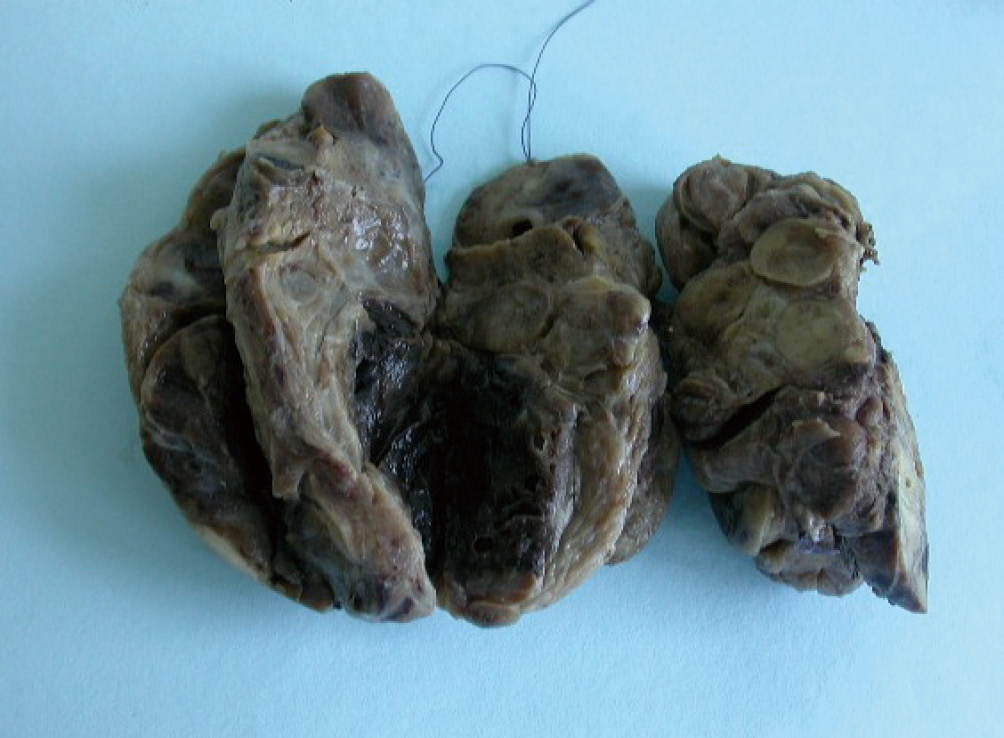 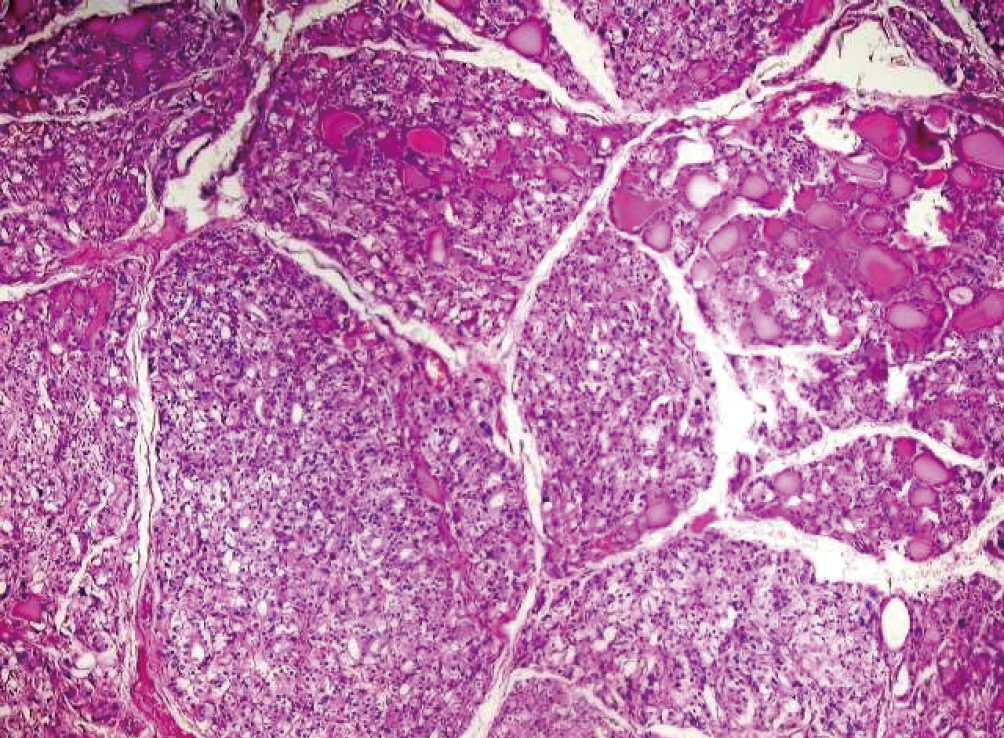 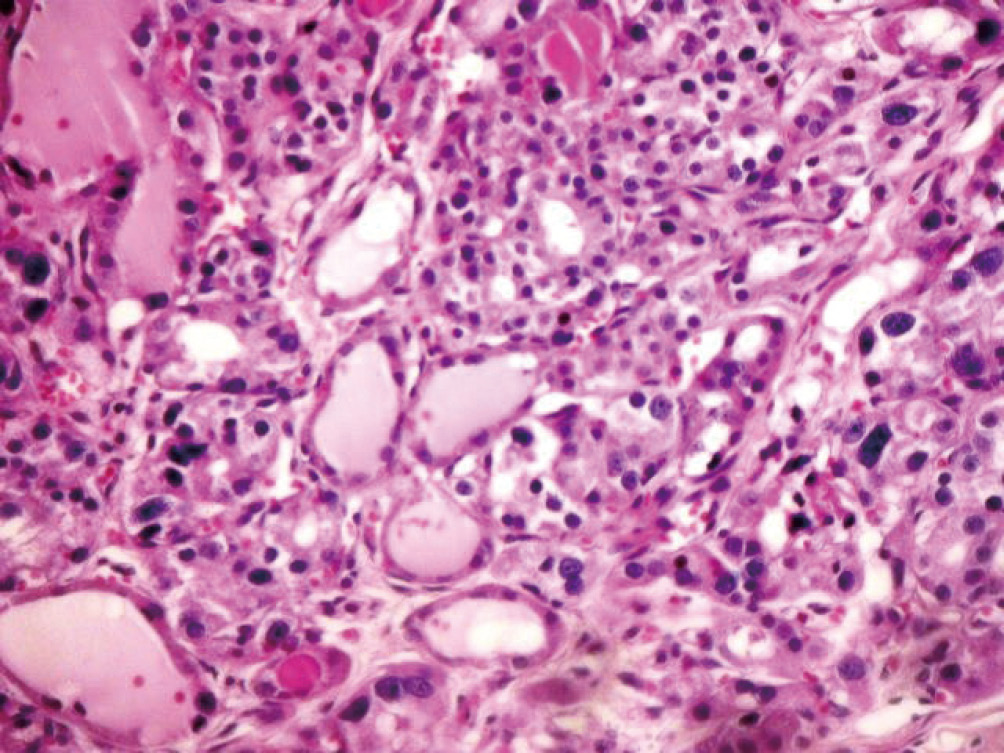 The patient feels well one year after.

Dyshormonogenetic goiter (10% to 15% of permanent congenital hypothyroidism) is the name given to a family of inborn errors of metabolism that lead to defects in the synthesis of thyroid hormone (1).

Many biochemical defects can cause dyshormonogenetic goiter. They include lack of responsiveness to TSH and defects in iodide transport, organification, coupling, thyroglobulin synthesis and secretion, deiodinase or thyroid hormone transport (4-7).

The two most common causes for dyshormonogenesis are the defective organification of iodide, and the defective synthesis and secretion of thyroglobulin (8-11). The defect in iodide organification is frequently the result of mutations in the thyroid peroxydase (TPO) gene. Recently, new genes involved in the etiology of dyshormonogenesis have been identified: dual oxidase 2 (DUOX2) and dual oxidase maturation factor 2 (DUOXA2). They are the principal elements generating the hydrogen peroxide needed for TPO function (9,10). Iodide transport defect includes defects in iodide trapping [NIS:Na(+)/I(-) symporter], in the facilitated iodide efflux across the apical membrane (PDS) (4,9).

The impaired synthesis of thyroid hormone leads to a loss of the negative feedback to the pituitary gland, which results in an overproduction of TSH. The overproduction of TSH results in constant stimulation of the thyroid follicular cells. The clinical presentation depends on the severity of the inborn error. A severe defect will lead to neonatal or congenital hypothyroidism, goiter, mental retardation, and growth abnormalities (cretinism). Milder defects will present later in life (adolescence or young adulthood) as goiter and minimal thyroid dysfunction. Thyroid dysfunction may be absent (8,12).

Macroscopically, the thyroid gland is enlarged (up to 600 g) and multinodular, and fibrous bands encapsulate individual nodules. Foci of thyroid cystic degeneration, thyroid hemorrhages or myxoid changes may be observed.

Histologically, the process is diffuse, without normal thyroid tissue. There is marked follicular hyperplasia, hypercellularity, with a predominance of solid and microfollicular patterns, sometimes papillary and insular formations, and decreased to absent colloid. The follicular cells typically exhibit severe cytologic atypia, including bizarre and markedly enlarged, hyperchromatic or vesicular nuclei. Mitotic figures are presumably due to continuous thyrotropin stimulation. These nuclear changes are most common in the inter nodular areas rather than in the nodules themselves. The fibrosis entraps abnormal follicles, which can simulate a malignancy. Irregularities at the edge of the nodules can simulate capsular invasion (1,5,6,13). The histology is thought to vary depending on site of enzymatic block (5,6,14).

Microscopically, features of DG are similar to those seen in iatrogenic goiters in infants following systemic administration of antithyroidal agents or radioactive iodine and those seen in Graves’ disease (thyroid diffuse hyperplasia). Dyshormonogenetic goiter can mimic follicular carcinoma or papillary carcinoma; In theses cases, histologic criteria such lack of capsular or vessel invasion and absence of cytoarchitectural features of papillary carcinoma raise the diagnosis. Thyroid undifferentiated carcinoma should be considered in differential diagnosis. This is due to the fact that the morphologic criteria employed to define undifferentiated thyroid carcinoma in most publications have been trabecular, solid, insular, cribriform growth patterns which can be seen in dyshormonogenetic goiters. But strict histologic criteria will help separate these lesions (1,5,6,14-17).

Follicular adenoma can occur in thyroids with DG and the capsule may appear focally violated by the hyperplastic process, in such case some observers have stated that diagnosis of malignancy can only be made if metastases have occurred (16).

Random nuclear atypia can occur in the form of enlarged pleomorphic nuclei with or without nuclear chromatin. These cellular changes can be mistaken for follicular, papillary, medullary, or undifferentiated thyroid carcinoma in cytologic specimens. Awareness of the clinical situation is, of course, extremely helpful (17).

Without treatment patients die at birth. Treatment can be medical (thyroid hormone replacement) or surgical if there is symptomatic enlargement. Early treatment is particularly important in severe cases to avoid or diminish mental retardation and growth abnormalities. The prognosis is excellent with treatment (1,8-10). Results after long-term follow-up have indicated satisfactory school performance, normal mean IQ values, and minimal motor dysfunction in treated children. However, specific defects in hearing-speech performance scales and minimal central nervous system deficits have been described.

DG is a benign rare condition presenting architectural and cytological criteria that may lead to overdiagnosis of malignancy if not well known. So this entity must be recognized in lack of strict histological criteria of malignancy in patient with history of hypothyroidism since infancy. An exact molecular diagnosis allows genetic counseling and the identification of asymptomatic mutation carriers (9).