BRCA population screening for predicting breast cancer: for or against?

Breast cancer is the most frequent female malignancy, with estimated 1,384,155 new cases and approximately 459,000 related deaths around the world (1). According to these figures it can be predicted that one every eight women will develop breast cancer during her lifespan (1). As for many other malignancies, the pathogenesis of breast cancer is clearly multifactorial, thus involving both environmental and genetic risk factors. The former class of risk factors includes different forms of ionizing radiations (e.g., environmental, occupational or diagnostic-therapeutic), synthetic chemicals such as organochlorines (e.g., pesticides, industrial chemicals and dioxins), oral contraceptives (OCs), hormone replacement therapy (HRT), pregnancy and menstrual history. Regarding genetics, dominant gene mutations seem to occur in a minority of breast cancers, and the most common among these are those affecting the BReast Cancer 1 (BRCA1) and BReast Cancer 2 (BRCA2) genes (1) (Figure 1). Both these genes are conventionally known to act as tumor suppressors, since they are actively involved in cell-cycle regulation and double-strand DNA breaks repair by means of homologous recombination (2). In patients with BRCA1 or BRCA2 mutations associated with impaired gene function (e.g., 5' to c.2281, c.2282 to c.4071, c.4072 to 3', c.68_69delAG, c.5266dupC for BRCA1, and 5' to c.3846, c.3847 to c.6275 and c.6276 to 3' for BRCA2, respectively), double strand DNA breaks cannot be efficiently repaired, so that chromosomal rearrangements gradually accumulate during cell division, some of which may engender the development of cell lineages with potency of autonomous cell replication or carcinogenic and metastatic potential (3). 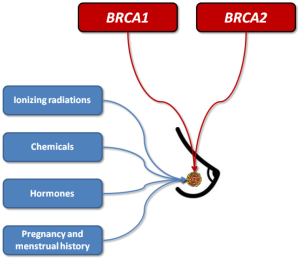 It has been convincingly demonstrated that the overall prevalence of BRCA1 or BRCA2 oncogenic mutations may differ widely according to the study populations. In particular, the prevalence is usually found to be very low in the general population (i.e., between 0.2–0.3%), is enhanced to approximately 3% in all breast cancer carriers, further increases to 6% in those with breast cancer development before the age of 40, but can be as high as 20% in women with a positive familial history of breast cancer (4). Despite the overall prevalence in the general population is definitely low, reliable evidence attests that the penetrance (i.e., the risk of developing breast cancer in carriers of BRCA1 or BRCA2 mutations) may be high, especially in women with affected relatives. This concept has been recently emphasized by data published by Kuchenbaecker et al. (5), who carried out a prospective cohort study including 6,036 BRCA1 and 3,820 BRCA2 female carriers, 4,810 of whom with breast or ovarian cancer and 5,046 without. The 5-year prospective follow-up allowed to demonstrate that the overall risk of developing breast cancer was 73% in women with a positive familial history for this malignancy and carrying BRCA1 oncogenic mutations, and as high as 65% in women with positive familial history for breast cancer and bearing BRCA2 oncogenic mutations. Notably, the risk of breast cancer was found to be further increased to 84% in Ashkenazi Jewish carriers of the c.68_69delAG BRCA1 polymorphism, irrespective of the familial history (5).

These important findings elicit some pragmatic considerations about the cost-effectiveness of widespread population screening for identifying subjects carrying oncogenic BRCA mutations. The recent case of the famous actress Angelina Jolie has added more fuel to the fire of the ongoing debate developing between those in favor or against BRCA (population) screening. Briefly, Angelina Jolie decided to undergo preventive double mastectomy because she was found to be carrier of a BRCA1 mutation, but she had previously lost her mother, grandmother and aunt for cancer while bearing the same polymorphism (6). This paradigmatic case has then contributed to generate the so-called “Angelina Jolie effect”, with the number of BRCA tests in the US increasing from 0.71:100,000 to 1.13:100,000 women (i.e., +60%) immediately after the media gave wide and unfiltered airtime to the event. Along with the broad diffusion in the social media, Jolie’s decision also attracted a large number of negative and positive opinions about the clinical efficacy and consequences of BRCA testing in unaffected women or in those with no risk factors (7). 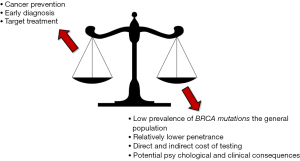 The first two aspects (i.e., the low prevalence and lower penetrance of BRCA mutations in the general population) have already been argued, but should be further analyzed according to an economic projection. Consistent with a financial and organizational perspective, genetic testing in clinical laboratories is not like screening for cholesterol, glucose or prostate specific antigen (PSA). We may all agree that the cost of measuring cholesterol, regardless of established criteria of appropriates (8), may produce a relatively modest impact on healthcare economics (i.e., the cost of a cholesterol test is approximately 0.045 US$ in the local laboratory). Unlike cholesterol, the cost of BRCA testing currently ranges between 300 and 5,000 US$, depending on the analytical technique and the number or type of mutations being assessed. Therefore, given for granted that none of us would not much complain about performing population screening for hypercholesterolemia, the actual impact of widespread testing for BRCA, even performed once in a lifetime, would be nothing but meaningless. According to the United States Census Bureau, the current US population averages 325.3 million people, 165.8 million of whom are women (9). Therefore, by estimating an optimistic cost of around 1,000 US$ for detecting the most penetrant BRCA mutations, once in a lifetime genetic testing would cost approximately 165,800 million US$ compared to a 325 million US$ (i.e., ~0.20%) expenditure for annual cholesterol screening in all US women in the age range between 18–80 years (Figure 3). This estimation would actually make it unfeasible to even imagine public coverage for this type of genetic testing in a world with limited resources, just now recovering from an unprecedented economic crisis. Yet, someone may then argue that BRCA testing might be ultimately cost-effective, since cancer prevention by “prophylactic” double mastectomy will contribute to lower the overall expenditure for treating breast cancer patients. According to reliable statistics, the cost of treating breast cancer approximated 16.5 billion US$ in the United States in the year 2010 (10). Considering that the prevalence of BRCA mutations is approximately 3% in all breast cancer carriers (4), population screening would theoretically produce a 495 US$ million saving due to prevention of cancer development in carriers of BRCA mutations, but this sum is just 0.30% of the overall predicted expenditure of once in a lifetime BRCA testing (Figure 3). 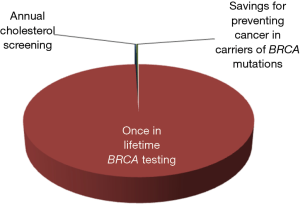 Figure 3 Estimated costs of once in lifetime BRCA testing, expenditure for annual cholesterol screening and potential economic savings for preventing cancer in carriers of BRCA mutations.

Despite we would all agree that each patient can chose to pay out of pocket for a given test, thus including genetic analyses and BRCA “screening” (11), the possible consequences on the healthcare system of a positive test results cannot be discounted. Beside simple surveillance or using chemoprevention, preventive bilateral mastectomy, even with no public health insurance option, may be associated with severe health consequences. Surgery carries a number of immediate risks (e.g., bleeding, infections, lymphedema), but also many long-term complications such as onset of chronic symptoms (i.e., pain, tingling or tightness sensations), fatigue, loss of mobility and the need for cosmetic surgery (12), some of which may ultimately lead the patients to seek publicly funded care, so indirectly raising the economic burden of genetic testing. Indeed, strict surveillance in BRCA-positive women is virtually unavoidable, even though the efficiency of mammography for early cancer detection remains unproven, especially for carriers of BRCA1 oncogenic mutations.

The psychological implication of a positive BRCA test in patients with no familial history for this type of cancer is the last, but not meaningless, issue. As earlier discussed, the penetrance of BRCA mutations is comprised between 39–53% in women with negative familial history (5), so meaning that the probability of developing breast cancer may involve, at worst, one every two women. Some women may hence feel empowered by knowing their BRCA status, but others may suffer this condition as an unsurmountable psychological burden. As for other types of genetic analyses, a positive BRCA testing may disclose unpredictable scenarios, being possibly associated with increased anxiety, distress, persuasion of undergoing “emotionally-driven” but unnecessary preventive surgery, up to possible cases of suicides especially involving psychologically fragile women (13). Then, although prophylactic bilateral mastectomy seems to reduce the future risk of breast cancer by 80-100% in women with highly penetrant BRCA mutations (14), this type of surgery does not have any impact on the future risk of ovarian cancer, which has also been convincingly associated with BRCA status (5). How these women should be managed or treated, especially if they are underage females? Should oophorectomy be considered, despite the risk of developing ovarian cancer in women with negative familial history for this malignancy is only comprised between 16–41% (5)? No definitive answers to these crucial questions have been provided so far, to the best of our knowledge.

Genetic testing, which allows identifying a kaleidoscope of polymorphisms and penetrant mutations with high accuracy and at an affordable cost for many, has completely revolutionized the history of science and medicine (15), thus becoming the ideal bridge connecting laboratory testing and personalized medicine (16). Nevertheless, although a number of extraordinary technological progresses have allowed to increase the quality of in vitro diagnostics and care, some notable threats are also emerging. Widespread genetic testing, without qualified medical advice and guidance, should probably be seen as a risk rather than an opportunity. In particular, the clinical interpretation of genetic cancer testing is already challenging for geneticists and physicians, but it may become awkward or even deceptive for the patients. The screening for BRCA is not an exception to this rule, since the boundaries between over- and under-use are not clearly defined (Figure 4), and the potential risks due to the generation of false-positive results (i.e., unwarranted further testing and unnecessary surgery) have been scarcely explored as well as false-negative findings (i.e., analytical errors, incomplete panels of mutations) (17). Considering that no universal consensus has been reached about the clinical management of patients with oncogenic mutations but no familial history of breast cancer (4,18), being in favor or against a population screening remains a genuine individual opinion. In this still unclear scenario, transparent and patient-oriented genetic counselling becomes imperative. The patient should be clearly informed about the potential clinical advantages and the possible consequences of positive and negative results of BRCA testing, along with the clinical efficacy and the inherent risks of narrow clinical monitoring or management, especially regarding prophylactic mastectomy. Waiting for Godot (i.e., the publication of collective evidence about the clinical efficacy and sustainability of a population BRCA screening), we believe that women at low risk of breast cancer should be allowed to take a medically-driven but autonomous decision about undergoing or declining BRCA testing. 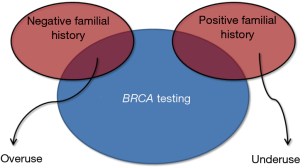 Figure 4 Over- and under-use of BRCA testing.