The mechanism of the antitumor effects of photodynamic therapy (PDT)

PDT is a non-invasive local treatment for cancer. PDT involves the administration of a photosensitizer and visible light irradiation at a specific wavelength to produce a photoreaction by the photosensitizer (1). Activation of the photosensitizer leads to conversion of ground-state molecular oxygen (3O2) into various highly reactive oxygen species, mainly chemically highly active singlet oxygen (1O2) which reacts with many biological molecules, including lipids, proteins, and nucleic acids, and leads to cancer cell death (2-4). Several PDTs are known to damage not only cancer cells, but also tumor vessels (4). PDT has several advantages over other conventional cancer therapies. It is relatively non-invasive because irradiation is limited to the cancer site and the photosensitizer accumulates predominantly in cancer cells, thus showing lower systemic toxicity and a relatively selective destruction of tumors. Therefore, PDT has been widely employed against various tumors to which irradiation can be applied directly, such as lung, brain, esophagus, stomach, breast, skin, bladder and uterine tumors.

Present state of PDT in Japan 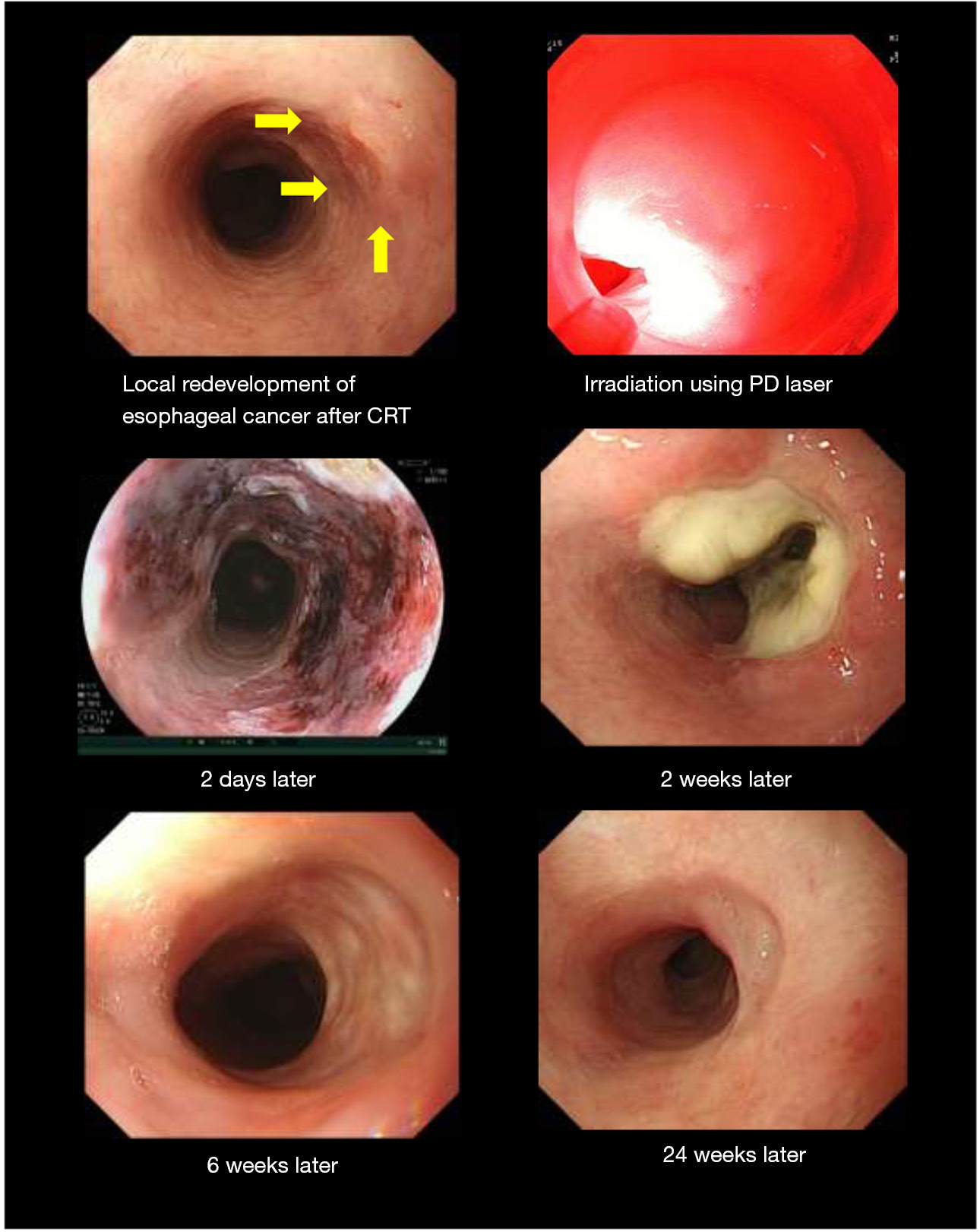 We wanted to develop a third-generation photosensitizer as a novel PDT which possessed cancer cell specificity and selectivity. Thus, we focused on the Warburg effect, the phenomenon where cancer cells take up higher levels of glucose than normal cells (10), and which is now utilized in positron emission tomography-computed tomography, a highly sensitive cancer imaging technique (11). Cancer cells generally exist in a hypoxic state which causes the induction of hypoxia-induced factor 1, which, in turn, upregulates the glucose transporter, GLUT1, thus increasing glucose incorporation in the cancer cells (12).

Firstly, we synthesized G-chlorin, which is the photosensitizer, chlorin, conjugated to 4 molecules of glucose (13,14). G-chlorin showed very strong antitumor effects against gastric cancer and colon cancer, being 20–50 times more cytotoxic than talaporfin PDT (15) (Figure 2). G-chlorin can also be used in tumor imaging by photodynamic diagnosis. When violet excitation light is irradiated to G-chlorin, red light is emitted and the disseminated tumor cells can be seen by G-chlorin’s red fluorescence. G-chlorin PDT has also been used for treatment of gastrointestinal tumors (GIST) in a xenograft model which is known to incorporate much glucose and is positive in positron emission tomography-computed tomography (16). 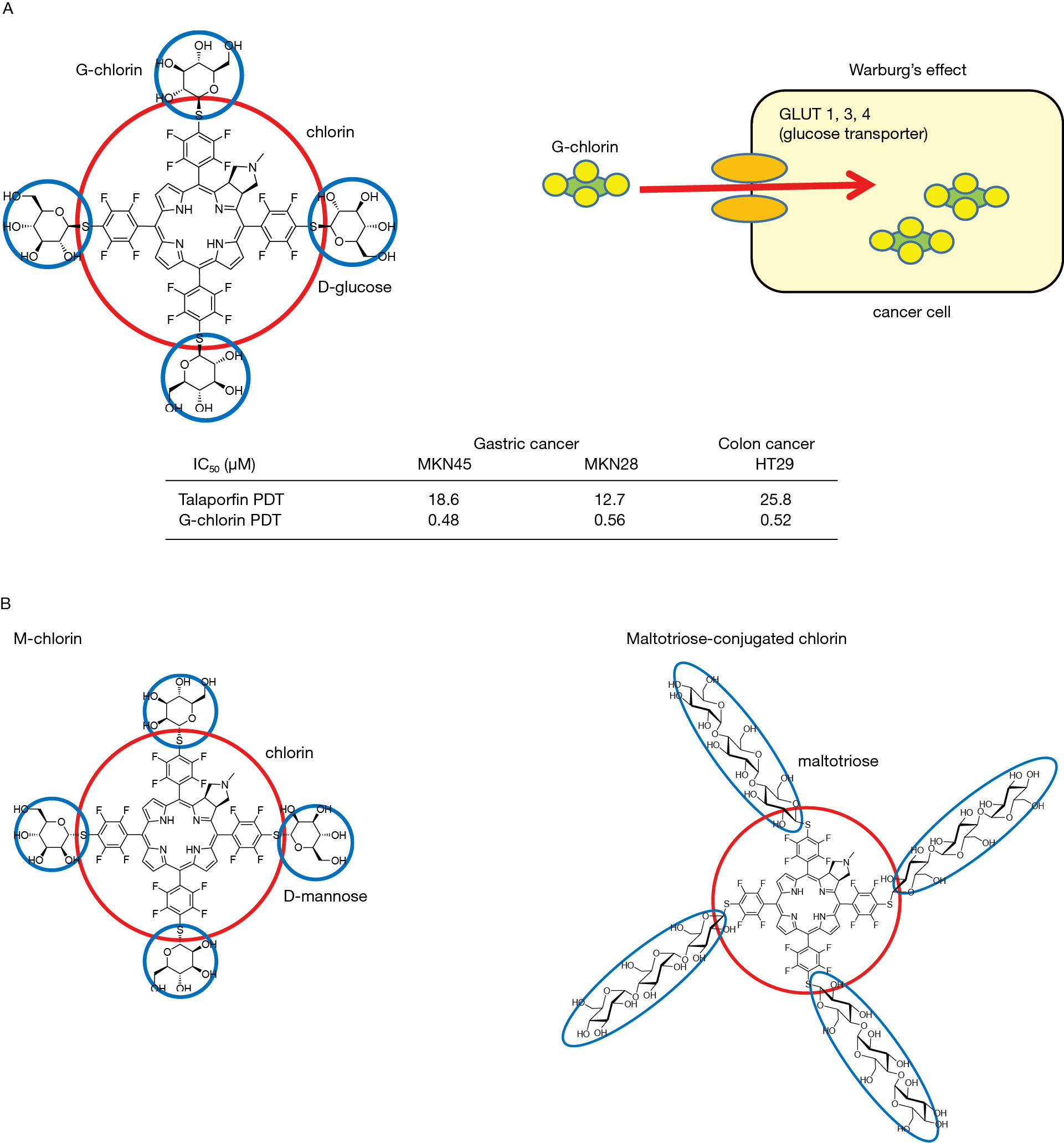 We also focused on TAMs which exist in the stroma of cancer tissue and accelerate tumor promotion, metastasis and down-regulation of adaptive immunity (17,18) (Figure 3). We induced differentiation of M1 and M2 macrophages from the THP1 monocyte, and found that M2 macrophages are similar to TAMs and mimic their biological character. TAMs express mannose receptors on their cell membrane, and only mannose-conjugated chlorin (M-chlorin) PDT inhibited the cell survival of TAMs (20). Mannose receptors are also expressed on cancer cell membranes and M-chlorin PDT has almost the same cytotoxicity against cancer cells in vitro as G-chlorin. In an in vivo allograft model study, M-chlorin PDT showed the strongest antitumor effects. The number of TAMs in the cancer tissue after PDT was significantly decreased in the M-chlorin group compared to the other groups (chlorin and G-chlorin) (19). 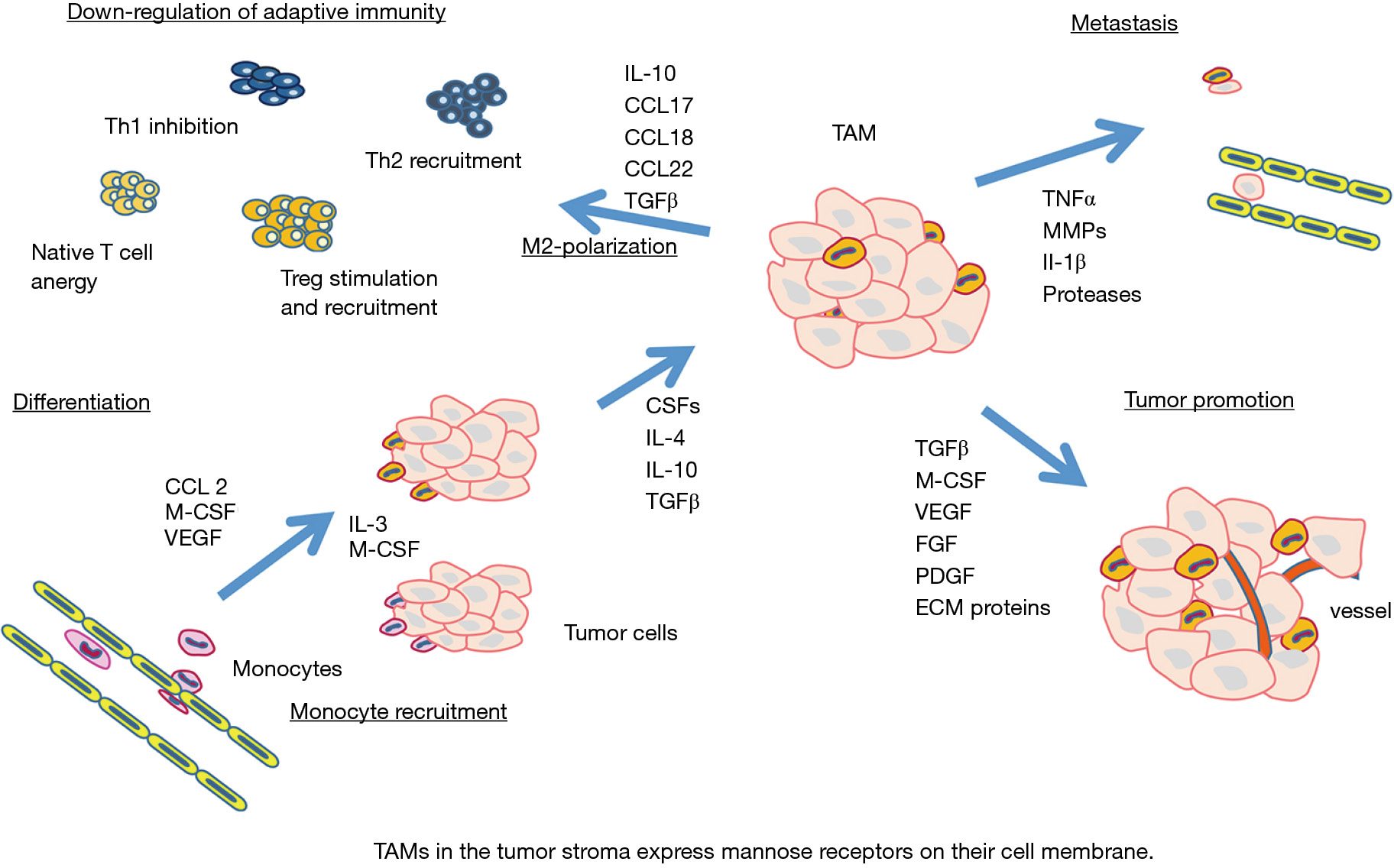 Figure 3 The roles of TAMs which exist in the stroma of cancer tissue (18). TAMs, tumor-associated macrophages.

Tumor destruction by PDT has been reported to be multifactorial: (I) direct killing of tumor cells by inducing reactive oxygen species; (II) tumor vessel damage; and (III) rapid recruitment and activation of immune cells favoring the development of anticancer adaptive immunity (20). The concept of damage-associated molecular patterns (DAMPs) by dying cancer cells has been proposed to play an important role in the induction of immunogenic cell death (21). The immunogenic factor, calreticulin (CRT) which is an endoplasmic reticulum protein, translocates to the cell surface and acts as an “eat me” signal and promotes phagocytic uptake of cancer cells by the immune system. Another important molecule is high mobility group box 1 (HMGB1) which is a ligand for toll-like receptor 4 (22). The dying cells release HMGB1 into the extracellular space and HMGB1 can interact with several receptors expressed on the surface of dendritic cells including toll-like receptor 4. PDT with porfimer sodium against lung carcinoma cells increases CRT expression and the release of HMGB1 (23). Recently, we also reported that G-chlorin PDT induces translocation of CRT and HMGB1 from the nucleus to the cytosol of cancer cells. We also confirmed that the vaccine effect of injecting cells treated by G-chlorin PDT is cancelled by silencing CRT and HMGB1 with small-interfering RNA (24).

In this review, we have discussed sugar-conjugated chlorins as possible candidates for third-generation photosensitizers. Although G-chlorin and M-chlorin are not hydrophilic, we recently developed maltotriose-conjugated chlorin (Figure 2B) which selectively accumulates in cancer cells and has a hydrophilic nature (25,26).

For use with the long wavelength of laser irradiation, potential candidates are bacteriochlorin or isobacteriochlorin which have optimal wavelengths around 730 nm and 860 nm, respectively (27).

Targeted drug delivery to tumor sites is one of the ultimate goals of drug delivery. A drug delivery system that uses an enhanced permeability and retention effect is considered to be one of the important tools for cancer-specific and -selective PDT. Several materials are known as delivery vehicles such as liposomes, micelles and dendrimers, biodegradable particles and artificial DNA nanostructures (28).

Recently, photoimmunotherapy was developed, which uses a specific antibody chemically joined to a photo absorber, a molecule that absorbs light from the near-infrared part of the spectrum (29). An ongoing phase I study is currently underway for near-infrared photoimmunotherapy in patients with recurrent head and neck cancer, using the photo absorber, IR700, and cetuximab (Erbitux®), an epidermal growth factor receptor antibody.

If a longer wavelength is used for PDT which can penetrate much deeper into the human body, PDT could be used for whole body cancer lesions such as metastatic cancer or carcinomatosa peritonitis. The development of a new laser device may also accelerate the development of PDT in the future.

Funding: This work was financially supported by JSPS KAKENHI Grant Number 25288028 (to SY), 26460947 (to HK), 26860520 (to MT), the Japan-German Exchange Program supported by the JSPS and the Deutsche Forschungsgemeinschaft (2014) (to SY), the Japan Advanced Molecular Imaging Program (J-AMP) of the Ministry of Education, Culture, Sports, Science and Technology of Japan (2014) (to SY), Yokoyama Foundation for Clinical Pharmacology (2014) (to MT), Aichi Cancer Research Foundation (2014) (to MT) and the “Translational Research Network Program” from Japan Agency for Medical Research and Development, AMED (2015, 2016) (to HK, AN, SY).