Inappropriateness in laboratory medicine: an elephant in the room?

It is now undeniable that laboratory tests play a central role throughout the clinical decision making and managed care. This is noticeably confirmed by recent data attesting that up to 70% of the clinical decisions are substantially based on results of diagnostic tests (1). Laboratory tests ordering is a multidimensional enterprise, primarily driven by tests availability, physicians’ education, skill, habits, liability and legal protection (i.e., defensive medicine) (2).

Despite remaining an essential aspect contributing to high-value and high-quality medical outcomes, the common practice of laboratory tests ordering carries a number of drawbacks. In particular, there is still ongoing debate about the real definition of appropriateness. In English dictionaries, the term is conventionally used for defining “something that is right, suitable or that fits for a certain scope, and that is right according to specific requirements”. The translation of this concept into laboratory medicine practice encompasses that appropriateness may be defined according to the so-called “six R” paradigm, which entails “prescription of the Right test, using the Right method, at the Right time, to the Right patient, with the Right costs and for producing the Right outcome” (3,4).

Improving appropriateness of laboratory diagnostics is a challenging issue. One of the major hurdles is still represented by the unclear perception that laboratory professionals, physicians, patients, policymakers, patients’ associations, media as well as representatives of diagnostic companies have about the real burden of inappropriateness. In particular, the widespread media coverage of this issue has frequently contributed to portray many different (and often unreal) scenarios, which have ultimately led to over- or under-emphasizing the clinical, organizational and economic consequences of inappropriate use of laboratory resources. This is quite problematic, inasmuch as some reliable data are instead available in the current scientific literature, and will be briefly revised in the following paragraph.

In an interesting study, Miyakis et al. retrospectively revised data of 25 laboratory tests obtained from over 400 patients hospitalized from both the emergency and the outpatient departments during a 6-month period (5). As many as 68% of these tests were found to have provided meaningless contribution to clinical management of patients, so unmasking a consistent over-usage of diagnostics tests. Notably, the number of inappropriate tests ordered by junior trainees was 20% higher than that of the senior staff. One of the most brilliant findings of this study was that an educational intervention on the medical personnel based on test-ordering behaviour, costs and factors contributing to overuse, was found to be effective to reduce the burden of inappropriateness, cutting down the number of avoidable tests by approximately 20% (i.e., from 2.01 to 1.58 tests/patient/day). A similar outcome was reported in an ensuing hospital-based investigation (6). Briefly, a request form encompassing a limited number of appropriate laboratory tests was implemented for use by the junior medical staff, and the number of inappropriate tests consistently decreased by approximately 20%, with no substantial impact on patient outcome. This was accompanied by a 17% decrease of the overall hospital expenditure for laboratory testing. More recently, Sarkar et al. comprehensively reviewed the data of 200 patients with hemostatic problems and discovered that inappropriate tests were ordered in as many as 78% patients, so causing over $200,000 avoidable costs for the local hospital (7). Approximately 34% of the overall inappropriateness could be attributed to over-utilization. A reliable estimate of inappropriate laboratory testing has recently been provided by a multi-database systematic review, using keywords such as “utilization” and “laboratory test (s)” (8). The pooled results of this meta-analysis showed that the mean rates of overuse and underuse of laboratory testing were as high as 21% and 45%, with overutilization of in vitro diagnostics approximating 44% during initial testing. Most worryingly, the trends of overutilization did not show a meaningful variation throughout a 15-year period (i.e., between 1997 and 2012), so confirming that appropriateness is still an unmet target in the second decade of the third millennium.

Despite the burden of inappropriateness may virtually embraces all areas of diagnostic testing, there are some specific settings where the figures are particularly concerning. A recent national scale study carried out in Italy revealed that the number of cancer biomarkers ordered was higher than 1 per every 5 individuals, which does not obviously match with the prevalence of cancer in the country (9). A further comprehensive analysis of data allowed to estimate that the burden of inappropriateness for breast cancer biomarkers was seemingly modest (i.e., 3%). Nevertheless, that of ovary cancer biomarker was found to be considerably high (i.e., 48%), whereas that of pancreas, gallbladder and other and unspecified parts of biliary tract cancer biomarkers was higher than 1,000%. This is an unreasonable number, even difficult to be figured out. Overall, the estimated inappropriateness of cancer biomarkers ordering in Italy was reported to be very close to 90%. These figures are not really different from those earlier provided by other two studies, the former also based in Italy and reporting that only 5% of the requests for cancer biomarkers testing were found to be coherent with international guidelines and recommendations (10), the latter based in Greece and concluding that proper requests for cancer biomarkers did not even approximate 10% (11). An indirect authentication that inappropriateness in cancer biomarkers testing is dramatically high comes from an interesting study, showing that establishing a culture of appropriateness based on interdepartmental collaboration and implementation of guidelines can be effective to decrease test ordering by 78% (12). Therapeutic drugs monitoring makes no exception to this rule, wherein inappropriateness of test ordering for monitoring theophylline and digoxin plasma values was found to be as high as 64.2% (13) and 45% (14) of all requests, respectively. As regards infectious diseases testing, Genç and Aksu estimated that between 37‒45% of all serological tests for hepatitis B virus (HBV) may be avoidable (15).

As specifically regards tests repetition, a population cohort study carried out in Canada reported that nearly 15% of follow-up orders for six common analytes (i.e., cholesterol, hemoglobin A1c, thyroid-stimulating hormone, vitamin B12, vitamin D and ferritin) were found to be avoidable (16). The inclination to unnecessarily repeat testing has detrimental effects on healthcare sustainability, as attested by another Canadian study showing that the annual cost of redundant laboratory tests repetition may be as high as 35.9 million dollars in that country (17). Notably, the reasons beyond inappropriateness are not limited to wrong habits, resistance to changes, poor culture and insufficient education, since the practice of prescribing avoidable tests is often triggered or worsened by healthcare inefficiencies. A paradigmatic example is represented by redundant laboratory testing for patients transferred from the emergency department, which can be as high as 40%, so eroding considerable hospital resources and disrupting both laboratory and emergency department efficiency (18).

Real and perceived consequences of inappropriateness

The consequences of inappropriately using laboratory resources are many and multifaceted. The first and rather obvious effect is that spending money for performing avoidable tests consumes precious assets which, in a world with limited resources and still plagued by an unprecedented economic crisis, may have an impact on the actual efficiency, sustainability and equity of care (19). With limited budget availability, the clinical laboratories around the globe are now forced to make difficult decisions about the number and types of tests to be maintained or implemented. Rather understandably, wasting resources for inappropriate testing makes it rather challenging to convince policymakers and local hospital administrators to implement new tests in the constantly expanding scenario of precision (personalized) medicine (20). The approach to diagnosing and treating many human disorders such as cancer and cardiovascular disease is now increasingly based on a personalized approach, entailing complex and often expensive tests. Epigenetics is strongly emerging as a valuable perspective for several multifactorial and complex conditions (21), which however necessitates huge investments for dedicated instrumentation and reagents, along with availability of skilled personnel. The sustainability of this revolution in laboratory diagnostics also passes through optimizing the use of conventional diagnostic investigations.

Another important aspect is that the final cost of a given laboratory test not only includes the direct cost of the assay, but also downstream expenditure which can be triggered by test results (22). It is now undeniable that the larger the number of tests ordered, the greater the chance of generating both false positive or false negative results, which may then promote follow-up, often invasive and expensive investigations, which in turn can have a serious impact on patients safety. To put it simply, the results of an apparently low-cost and easy test may then generate incremental costs due to additional testing, but may also trigger unjustified clinical management in the presence of unreliable data.

Squeezed between limited resources and increasing demand for high-quality of care, the target of increasing appropriateness of laboratory test ordering remains one of the major challenges for the future of laboratory medicine (Figure 1). This inherently necessitates that policymakers, local hospital administrators, laboratory professionals, clinicians, patients' associations and diagnostic companies should all be embarked in the same landmark effort for disseminating a better culture. Developing and implementing reliable and sustainable solutions cannot discount a synergic endeavor and a strict cooperation among all these partners. What everybody needs to clearly acknowledge, is that we are all in the same boat, and we all have to row in the same direction, with the awareness that improving appropriateness in laboratory diagnostics not only will be effective for managing costs, but will also contribute to generate major clinical benefits and greater safety for the patients, so ultimately increasing the real and perceived value of diagnostic testing. 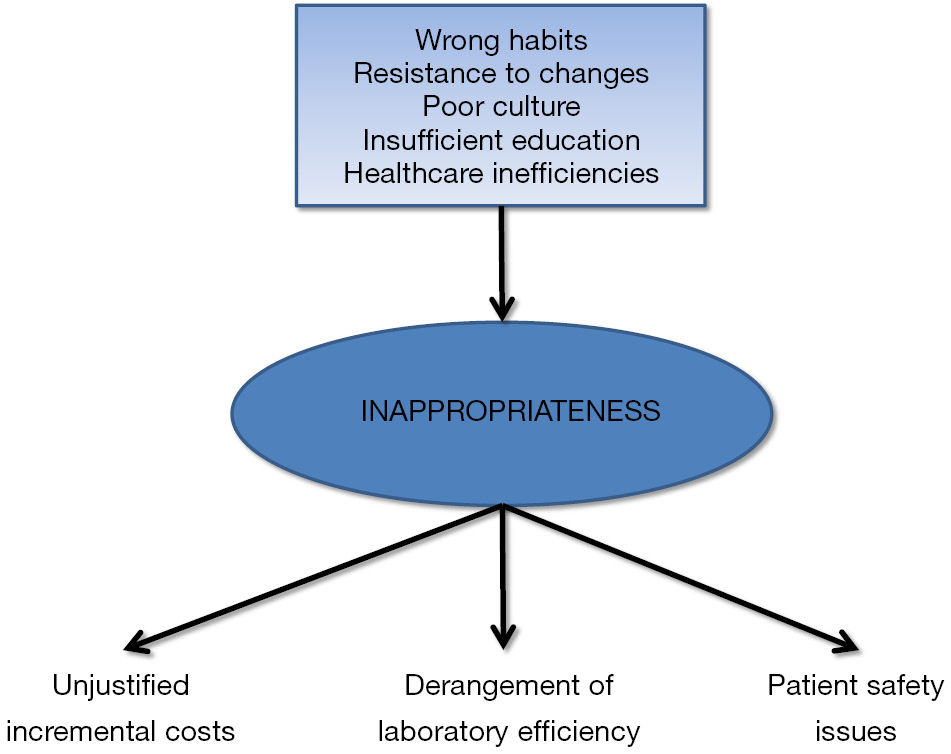