Gastric cancer is the third most common cancer worldwide, and it accounts for 3–10% of all cancer-related deaths. The vast majority (90–95%) of gastric cancers are adenocarcinomas which include two major histologic types, intestinal and diffuse. Although intestinal-type cancer has been associated with chronic atrophic gastritis and intestinal metaplasia, the exact mechanisms leading to cancer initiation and progression remain largely unknown. Stem/progenitor cell mutations have been linked to cancer initiation in multiple gastrointestinal organs including the esophagus, where we utilized lineage tracing to show that basal progenitor cells are the cell-of-origin for esophageal squamous cell carcinoma (1). By contrast, the cell-of-origin for gastric cancers remains somewhat controversial, in part due to the possible presence of multiple stem cells in the stomach (2-5).

In humans the stomach is divided into the proximal stomach which includes the cardia, fundus and corpus, and the distal stomach which includes the antrum and pylori. The epithelium lining the entire human stomach is simple columnar. By contrast, the rodent stomach includes the forestomach and hindstomach that are lined by stratified squamous and simple columnar epithelium, respectively (6). Stem cell research has focused primarily on the antrum and corpus which contain many gland units composed of pit, isthmus and base regions (Figure 1). While LGR5+ cells at the gland base, CCK2R+ cells at the +4 position and SOX2+ cells in other regions have been shown to act as stem cells in the antrum (4,5,7), the location and characteristic of stem cells in the corpus remain controversial (2-4,8). Two stem cell populations have been proposed: one is located at the corpus isthmus while the other is a subpopulation of chief cells located at the corpus gland base (2,3). Recently, Matsuo et al. utilized a transgenic CreER mouse line driven by a Runx1 enhancer element (eR1-CreERT2) to confirm that the isthmus epithelium contains stem cells that are able to maintain the gland units (9). In this study, the authors first examined the expression of Runx1 and eR1-GFP in the hindstomach, and they found that these two proteins are enriched in the dividing cells (Ki67+) at the isthmus and some cells in the base region. They then showed that lineage-labeled cells in eR1-CreERT2; R26tdTomato mice are able to generate several cell types in the corpus: mucus-producing pit cells (Muc5ac+), neck mucous cells (GS-II+), acid-secreting parietal cells (HK-ATPase+) and chief cells (Pepsinogen C+). Consistently, single eR1+/tdTomato+ (eR1high) cells one day after Tamoxifen induction are also able to proliferate to form organoids containing these cell types in the presence of WENR (Wnt3a, EGF, Noggin, Rspondin) or ENJ (EGF, Noggin, Jagged1). In addition, target activation of Kras leads to hyperplasia of pit mucous (foveolar) cells and antralization of the corpus gland in eR1-CreERT2; KrasG12D mice. Consequently, numerous U-shaped pyloric gland-like structures replace the original corpus gland accompanied by the loss of parietal and chief cells towards the base (9). Foveolar hyperplasia is similar to what has been described in the stomach with ectopic Kras activation by a KRT19 promoter that also targets the corpus isthmus but not the zymogenic region (9-11). Matsuo et al. therefore suggest that alternation of isthmus stem cells following Kras activation promotes the pathological changes in eR1-CreERT2; KrasG12D mice (9). 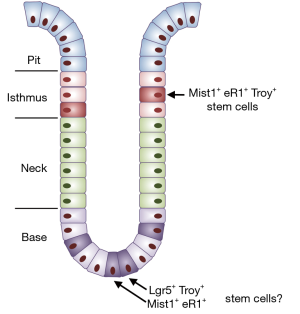 Figure 1 Stem cells in the corpus of the glandular stomach. Lineage tracing with the Mist1-CreERT2 (knockin) and eR1-CreERT2 (transgenic) allele demonstrates that isthmus cells are stem cells. However, questions remain regarding whether a subpopulation of chief cells in the base region behaves as stem cells (see text for details).

Intriguingly, eR1-GFP also labels a subpopulation of chief cells in the base region of the corpus (termed SC-bs by the authors) (9). The authors raise the possibility that Kras activation might drives the SC-bs cells to re-enter cell cycle (Ki67+) and de-differentiate to generate CD44+ stem cell-like cells (9). The authors are able to show that rare Kras-activated chief cells express the mucous neck cell marker GS-II, similar to that described for spasmolytic polypeptide-expressing metaplasia (SPEM) (8). Previously Nam et al. demonstrated that acute loss of parietal cells induced by two drugs, DMP-777 and L-635 also drives the proliferation of Mist1-CreERT2 lineage-labeled cells and promotes the expansion of SPEM in the lower glands and near the base region (8). However, the initial conclusion that this was due to an expansion of chief cells has been called into question by studies showing that Mist1-CreERT2 also labels a quiescent isthmus stem cell that can give rise to corpus metaplasia, even when chief cells are entirely ablated (3). Notably, Lgr5-eGFP-ires-creERT2 lineage-labeled cells do not expand to generate SPEM following DMP-777 treatment, although the Lgr5 gene is expressed in chief cells (2). It has also been shown that a subpopulation of chief cells express TNF receptor superfamily member 19 (also known as Troy) (2). Lineage tracing with a knockin Troy-eGFP-ires-CreERT2 allele suggests that these chief cells may act as quiescent “reserved” stem cells (2). Notably, Troy is also expressed by a rare cell population in the isthmus, and linage-tracing with a BAC transgenic mouse line (Troy-BAC-CreERT2) indicates that these isthmus cells act as stem cells (3). By contrast, Troy-BAC-CreERT2 lineage-labeled chief cells do not behave as stem cells, unless one Troy allele is deleted through crosses to Troyflox/+ mice, suggesting that heterozygous loss of Troy alters chief cell capability (3). Along this line, it will be interesting to perform a time-course study of lineage-labeled proliferating cells (Ki67+) in the corpus of eR1-CreERT2; R26tdTomato; KrasG12D mutants following Tamoxifen injection (9). One can examine pathological changes at days 1, 2, 4, 7 and 14 after Kras activation, and record the migration/expansion of lineage-labeled cells in both isthmus and base regions. Alternatively, the mice can be crossed to R26-Confetti mice to look for single color expansion at these two locations; previous studies of Mist1-CreERT2 × R26-Confetti mice showed that single color expansion was observed only at the isthmus and not at the corpus base. These experiments should yield important insights into the argument regarding whether chief cells in the base region contain stem/progenitor cells.

In summary, Matsuo et al. elegantly demonstrated that stem cells in the isthmus can be lineage-labeled by the eR1-CreERT2 transgenic allele. Kras activation leads to foveolar hyperplasia and antralization of the corpus gland through influencing isthmus stem cells in eR1-CreERT2; KrasG12D mice. Since the eR1-CreERT2 allele also labels a subpopulation of chief cells, detailed examination of pathological changes in eR1-CreERT2; KrasG12D mice should provide more information regarding whether chief cells contain stem cells which may serve as a cell-of-origin for gastric cancers. eR1 appears to label both progenitors and an active stem cell, and contrasts with the quiescent Mist1 isthmus stem cell previously identified. It is worth pointing out that the eR1-CreERT2 allele also labels stem cells in the pyloric gland (9). This mouse line therefore will be useful for elucidating the mechanisms driving stem cell-initiated gastric malignancies.

The authors are thankful for inputs from Dr. Timothy Wang at Columbia University.