Vinculin at the heart of aging

With age, the heart and large arteries show decreased elasticity. In arteries, this results in increased resistance to cardiac pump function and increased workload against this resistance results in pathological cardiac hypertrophy (1). The left ventricle undergoes an increase in wall thickness and an overall expansion of left ventricular mass with age. At the cellular level, this overload results in an increase in cardiomyocyte dimension and decrease in cardiomyocyte number (2). In terms of the cardiac scaffold, collagen deposition increases in the aging heart, contributing to further stiffening of the myocardium (2). These factors altogether impact diastolic function of the heart, impairing the ability for proper relaxation and ventricular filling. Systolic function is not often affected with cardiac aging, based on the preserved ejection fraction and stroke volume associated with heart failure (3). The cytoskeleton encompasses a network of proteins associated with the sarcomere (titin, α-actinin), true cytoskeleton (desmin, actin), cell membrane (vinculin, dystrophin), and intercalated disc (ICD) (desmoplakin, connexin 43) that function to provide cell stability, as well as transmit and receive mechanical and chemical stimuli both within and between cells (4). During cardiac stress and failure, there are significant alterations in the expression of cardiomyocyte cytoskeletal proteins, including myosin and vinculin (4). Cytoskeletal alterations are also observed during cardiac aging (5). However the consequences of these alterations in disease and aging on mechanosensing, force transmission, and global heart function remain unknown. In the recent publication, “Vinculin network-mediated cytoskeletal remodeling regulates contractile function in the aging heart”, Kaushik et al. identify a protective role for vinculin in the aging heart. Their study exploits proteomic analysis of simian and murine ventricles as well as functional analysis of transgenic Drosophila models to highlight a major role for vinculin-mediated cytoskeletal remodeling in mechanotransmission during cardiac aging (Figure 1). 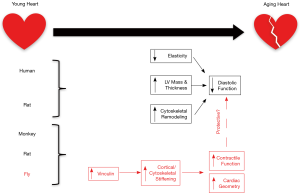 Figure 1 A role for vinculin in the physiological and molecular alterations associated with cardiac aging. In man and rat, the hearts undergo an age-related decrease in arterial and ventricular elasticity and a hypertrophic response (increased LV mass and wall thickness), which ultimately leads to a decrease in diastolic function. At the cellular level, cytoskeletal remodeling accompanies these changes. Kaushik et al. identify vinculin upregulation as a molecular hallmark of cardiac aging in monkey and rat hearts. They further suggest a cardioprotective role for vinculin overexpression (shown in red) via increased cortical/cytoskeletal stiffening, which then leads to improved geometry and increased contractile function using the aging fly heart as a model system. Future studies should be directed to determine if vinculin overexpression can also circumvent the diastolic dysfunction associated with aging in the mammalian heart.

Mechanotransduction is the process of converting mechanical stimuli into biological signals, eventually seen as changes in tissue structure and function. In the heart, in addition to transducing mechanical inputs such as pressure or deformation, cardiomyocytes can also transmit mechanical forces via structural components within the cell (mechanotransmission). These processes occur in a bi-directional manner, with mechanical forces being transmitted both outside-in (i.e., for load sensing) and inside-out (i.e., for sarcomere force transmission) through the myocyte cytoskeleton, nucleus and cell membrane (6). These events occur at the membrane-localized costamere through proteins such as β integrin, talin, and vinculin, and the ICD through N-cadherin, α/β-catenin, and vinculin (6,7). Vinculin serves as an actin-binding protein that allows the actin cytoskeleton to connect to the sarcolemma (7), thus stabilizing actin and providing a structure to transfer mechanical forces within the cell (8). Integrins sense and respond to the environment through their direct interaction with the extracellular matrix (ECM). The integrin-talin-vinculin complex allows mechanical cues in the ECM to be translated into the cytoskeleton of the cell (8). In addition, vinculin contains binding sites for signaling proteins such as ponsin, actin-related protein-2/3 (Arp2/3), and protein kinase C-α, which can regulate functions such as growth factor signaling, actin polymerization, and cytoskeletal formation (8). This suggests that vinculin may be involved in multiple mechanical signaling roles, such as force transmission, sensing and biological signaling in the cardiomyocyte. Vinculin mutations can lead to human hypertrophic and dilated cardiomyopathies (9), further suggesting an essential role for vinculin in load-mediated cardiac disease. Mouse models are valuable tools for dissecting the mechanisms of vinculin. Cardiac-specific ablation of vinculin in the mouse reveals pathological abnormalities that may lead to sudden death from ventricular tachycardia. Mice surviving the arrhythmia-induced sudden death progressed to a dilated cardiomyopathy and died by 6 months of age (7,10). Vinculin deficient cardiomyocytes exhibited ultrastructural abnormalities at the ICD as well as decreased expression and/or mislocalization of ICD (cadherins, connexin 43) and sarcolemmal (β1 integrin) proteins (7,10). It is these dual roles of vinculin (structural and sensing) at the ICD and sarcolemma that likely result in the severe cardiac pathology in vinculin deficient hearts. The diverse functions of vinculin and implications in human disease make it important to further understand the role of vinculin, particularly in load-mediated remodeling and cytoskeletal force transmission.

Kaushik et al. utilize atomic force microscopy (AFM) to interrogate heart stiffening, and correlate this to gene expression to gain insight into the relationship of cortical stiffening and cytoskeletal remodeling with age. Although this strategy has the benefit of utilizing the intact fly heart, it does not allow for comprehensive analysis of cardiac mechanics as observed in the mammalian heart. Although AFM has the advantage of measuring local properties of membrane elasticity, there are limitations to translating these parameters to passive material properties associated with stiffness, which have been primarily attributed to the intracellular sarcomeric protein, titin, as well as the ECM (collagen) (12). The role of the mechanical properties of the myocyte sarcolemma in determining myocardial stiffness remains unknown. Thus, future studies utilizing mice with cardiac-specific vinculin alterations should be exploited to investigate age-related passive elastic tissue properties, as well as the role of vinculin in force transmission within the cytoskeleton. In particular, studies should focus on how vinculin may modulate the function of known passive structural proteins such as titin. Mice are a good model for cardiac aging as they develop an increase in LV mass, maintenance of systolic function, and decline in diastolic function as seen in human hearts with aging (13). Thus, discovering protective roles of vinculin in aging will logically progress to mouse models. There are several mouse models of premature aging that impact the heart, which include the klotho mutant model (14) and the zmpste24 mouse mutant model (15). Thus, it would be interesting to determine whether vinculin overexpression could also circumvent age-related cardiac pathologies in these models. Vinculin overexpression could improve diastolic and systolic cardiac dimensions as well as functional deficits in a myosin knockdown Drosophila line, suggesting a cardioprotective role for vinculin overexpression in alternative models of age-related heart failure.

Functional analysis by Kaushik et al. measures myocardial shortening velocity as a relative index of force production, in response to various acute hemodynamic loads. Their study showed mechanical performance defects in w1118 flies that do not undergo cortical stiffening, and suggest there are greater contractile forces in w1118 flies that overexpress vinculin. Although this approach provides some information about contractile function in the aging fly heart, inferring force generation from velocity measurements has limitations. For example there is a well-known inverse force-velocity relation in muscle. Thus, future studies should utilize direct measures of force or stress in isolated cells or tissue samples, or pressure generation in the ventricular chamber to more accurately assess systolic function. If such studies are not possible in Drosophila, analyzing pressure changes in a rodent model would allow for better characterization of active force generation and contractility in aging. Mice provide a good model for assessing both diastolic and systolic function through left ventricular pressure-volume loops in a cardiac system that more closely resembles humans. This could be paired with vinculin delivery in the aging mouse heart to examine effects on contraction via altered mechanical signaling within the myocyte and function as a preliminary evaluation of the potential for vinculin overexpression as a therapy in aging.

Kaushik et al. propose a primarily structural role for vinculin, via its association with the actin cytoskeleton, which provides cytoskeletal reinforcement and increases contractility. However, an alternative interpretation could be that vinculin overexpression leads to alterations in mechanotransduction and subsequent gene expression in pathways related to load-sensing mechanisms. Vinculin interacts with integrin and talin to facilitate signal transduction and directly binds signaling proteins that have a range of cellular effects including myocyte growth and remodeling (6-8). It is likely that the positive effects seen in response to vinculin up-regulation in aging are a combination of structural (systolic force transmission) and signaling (mechanotransduction) benefits from this multi-functional protein. In addition, the role of vinculin has not been thoroughly investigated as it relates to the ICD in the fly or mammalian systems. Vinculin plays a pivotal role in ICD stability and cardiac-specific vinculin loss in mice results in severe cardiac pathology impacting the ICD (10). Future studies dissecting the contribution of these subcellular roles for vinculin in the aging heart will also provide better understanding of the mechanistic basis of the cardioprotective effects of vinculin during aging.