The current armamentarium of anticoagulant drugs is broad and multifaceted (1) (Figure 1). Historically, anticoagulant treatment has been based on administration of vitamin K antagonists (VKAs; especially warfarin and syntrom), which mainly act by reducing the synthesis of active vitamin K-dependent factors (factors II, VII, IX and X). Due to a long lag phase of anticoagulation induction, the additional inhibitory effect on two physiological inhibitors of blood coagulation (i.e., protein C and protein S) and the narrow therapeutic range, VKAs have been supported for decades with initial and/or additional use of heparins/derivatives (1). These conventionally included unfractionated heparin (UFH), which is typically administered intravenously, and this was later replaced by low molecular weight heparin (LMWH) (administered subcutaneously) for many patients/indications. This latter compound has proven to be more effective and safe than UFH, since LMWH acts prevalently on factor X and, to a lesser extent, on factor II, and shows more consistent inter-individual pharmacological activity. Due to the rare but possible occurrence of heparin-induced thrombocytopenia (HIT), other compounds were then released, among which is fondaparinux, a synthetic pentasaccharide which prevalently inhibits factor X and only slightly cross-reacts with heparin. Similarly to heparins, fondaparinux is also given parentally (subcutaneously), thus making all such drugs quite uncomfortable for patients, especially in the outpatient setting, due to the need of repeated injections over time (1). Within the hospital setting, the use of such drugs is also inconvenient for medical/nursing staff. 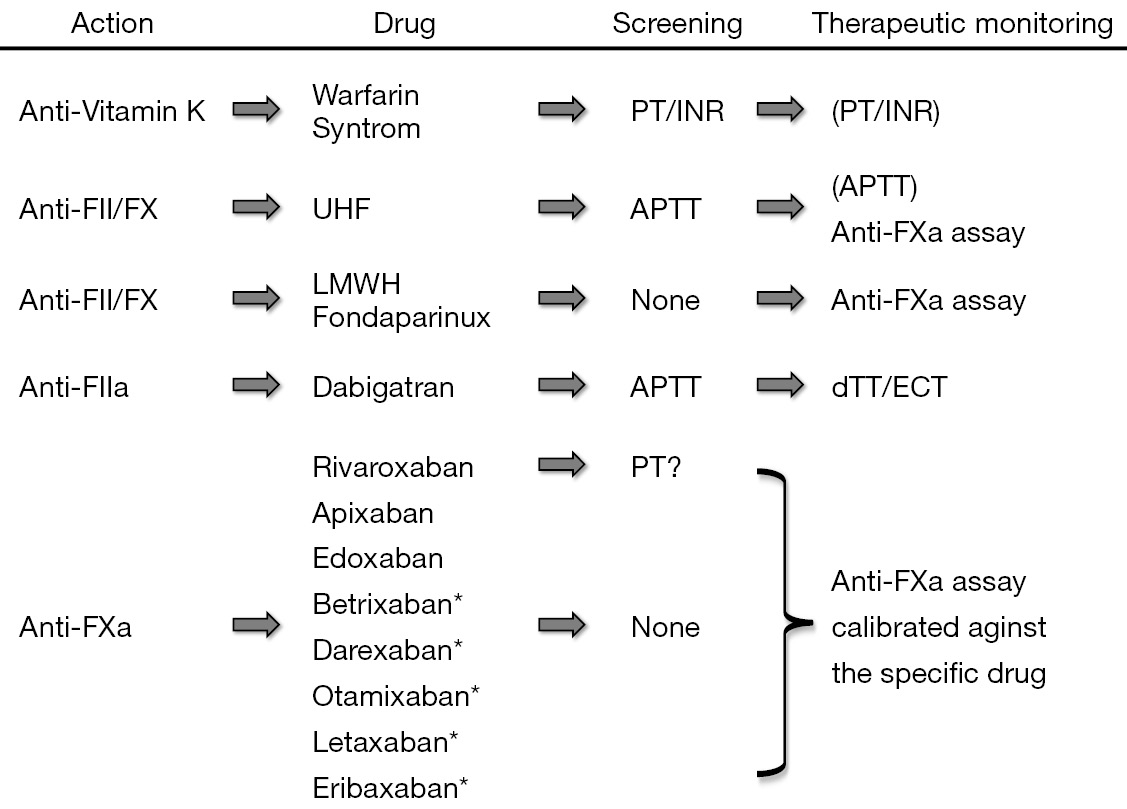 Nearly 10 years ago, owing to the many limitations of traditional anticoagulant medications (VKAs, heparins and fondaparinux), a new category of drugs was developed. These compounds, formerly known as “new oral anticoagulant agents” (NOACs), have now been finally defined as “direct oral anticoagulants” (DOACs) (2). These include agents that directly inhibit activated factor II (only a single agent called dabigatran) or activated factor X. Among this latter class of therapeutics, rivaroxaban, apixaban and edoxaban have already been approved for prevention of stroke in patients with atrial fibrillation and/or prevention and management of venous thromboembolism in many countries. Other inhibitors of activated factor X are in development (i.e., betrixaban, darexaban, otamixaban, letaxaban, eribaxaban), and it is entirely likely that they will also be soon ready for ‘prime time’, namely the long-term anticoagulation of the majority of patients undertaking anticoagulant therapy. The many advantages of these drugs include their oral administration (which thus eliminates the need for injections), their possible use at fixed dosage in the vast majority of patients, as well as their largely predictable pharmacokinetics, which limits the need for repeated testing in order to establish whether or not individual patients are within the therapeutic range. Yet, laboratory monitoring is recommended in certain categories of patients (e.g., those with acute liver or renal failure, extremes of body weight, suspected pregnancy, unexpected thrombosis under treatment), as well as in those with severe trauma, bleeding or needing urgent surgical management (3,4). Under all these circumstances, the standard mantra that laboratory monitoring is unnecessary in patients using DOACs is unsatisfied, thus placing the laboratory at the centre of patient clinical management. Nevertheless, unlike VKAs and UFH, the use of screening tests for establishing a reliable measure of anticoagulant activity remains controversial with these drugs. Beside dabigatran, for which a good linear relationship seemingly exists between clotting time of activated partial thromboplastin time (APTT) for many reagents and concentration of the drug, for all the oral anti-activated factor X compounds no simple first-line test has proven safe and reliable enough for defining the patient’s anticoagulation status (5,6). According to recent recommendations and guidelines, the most reliable approach for obtaining clinically useful information therefore entails performing an anti-activated factor X (anti-FXa) assay, specifically calibrated against the drug being taken by the patient (7). This means that each laboratory needs to implement at least three different tests for each of the currently available anti-FXa drugs (rivaroxaban, apixaban and edoxaban), and probably also for the many other compounds soon to be marketed (betrixaban, darexaban, otamixaban, letaxaban and eribaxaban). In practice, this would require the use of specific reagents, calibrators and controls for each drug being tested. Notably, laboratory professionals will also need to maintain the coagulation analyzer calibrated and monitored (by internal quality controls) for all these tests, perhaps 24 hours a day and 365 days a year, since urgent assessment may be required, as earlier mentioned. Altogether, then, the laboratory may be forced to implement and perform as many as 13 different tests, including 10 ‘different’ anti-FXa assays, according to the different type of drug potentially used by patients (Figure 1). Rather understandably, in a world with limited resources and still plagued by an unprecedented economic crisis (8), this would pose a dramatic burden on the budgets of clinical laboratories as well as on the entire healthcare system (9). Another dramatic drawback emerges from the need, especially for general laboratories which usually perform urgent testing, to educate laboratory professionals performing these tests and interpreting results. Finally, the actual cost of treatments employed for reversing anticoagulation is considerably high in patients using DOACs (10).

The issue of healthcare sustainability is as important as ever. Many remarkable advances in science and medicine are opening the vital issue of social affordability, wherein policymakers and hospital administrators are struggling on how to pay for DOACs and other cutting-edge drugs such as evolocumab (a new class of cholesterol-lowering drug) or sofosbuvir (a new hepatitis C medication) (11). The many anticoagulant compounds already available in the market, as well as those that will be commercialized soon, pose a tangible risk of eroding many healthcare resources. To put it simply, this represents a kind of a perfect storm for laboratory medicine.