There are 750,000 patients diagnosed with a myocardial infarction in the United States yearly, of which approximately 25% will develop an ischemic cardiomyopathy complicated by significant mitral regurgitation (MR) (1,2). The occurrence of ischemic MR is associated with significant morbidity and mortality, which increases commensurate with the MR severity (2). It is caused by the abnormal mitral valve geometry that develops after the onset of left ventricular (LV) remodeling and dilatation, which results in posterolateral and apical papillary muscle displacement, impaired systolic shortening of the interpapillary muscle distance, and mitral valve leaflet tethering (3,4). The subsequent disruption of the mitral valve closing-tethering forces leads to an incomplete systolic mitral valve closure and the development of ischemic MR. A dilated mitral annulus is also a common finding; however, its role in the development versus exacerbation of ischemic MR, is not clearly defined (4,5).

Despite guideline-directed medical therapy, as well as cardiac resynchronization device implantation in appropriate candidates, moderate to severe ischemic MR often persists, which worsens LV remodeling, systolic dysfunction, and heart failure symptoms. In this setting, a mitral valve intervention may be considered, as outlined in major Societal Guidelines (6,7). When electing to repair the mitral valve in ischemic MR, the most common technique utilized is an undersized ring annuloplasty (Ring MVr). However, published data have questioned the durability of a Ring MVr, which was prospectively studied in two seminal Cardiothoracic Surgical Trials Network (CTSN) randomized trials (2,8,9). In the first study, 301 patients with multi-vessel coronary artery disease and moderate ischemic MR were allocated to undergo coronary artery bypass grafting alone versus in combination with a Ring MVr (8). At 2-year follow-up, recurrent moderate or greater MR occurred in 11.2% of the Ring MVr patients, with no benefit in the indices of LV remodeling. In the second study, 251 patients with severe ischemic MR were randomized to receive either a Ring MVr versus a chordal-sparing mitral valve replacement, with concomitant coronary artery bypass grafting, performed if clinically indicated (9). At 2-year follow-up, moderate or greater MR reoccurred in 58.8% of the Ring MVr patients, with no benefits noted in the indices of LV remodeling.

Capoulade and colleagues sought to identify the predictors of recurrent moderate or greater MR after a Ring MVr in the CTSN trials, by analyzing the available baseline and 1-year post-operative echocardiograms of 214 patients (10). The mean age was 66±10 years, 67% were male, 44% were in New York Heart Association functional class III or IV, and 90% underwent concomitant coronary artery bypass grafting. At baseline, the mean LV ejection fraction was 41%±11%, the MR effective regurgitant orifice area was 0.29±0.16 cm2, and the LV end-diastolic and end-systolic diameters were 56±8 and 46±9 mm, respectively. At 1-year follow-up, recurrent moderate or greater MR occurred in 45 patients (21%). The results demonstrated that the LV-mitral valve ring mismatch ratio, which is defined as the ratio of the LV end-systolic diameter to the implanted mitral valve ring size, was significantly associated with recurrent moderate or greater MR, regardless of baseline MR severity and LV ejection fraction. Patients with recurrent MR at 1 year had a larger LV end-systolic diameter/ring size ratio versus those without (1.75±0.29 vs. 1.61±0.3; P=0.006), and for each 0.5 increase in the ratio, the odds of recurrence more the doubled (OR: 2.20; 95% CI: 1.05–4.62; P=0.04).

The findings of an association between LV-mitral valve ring mismatch and recurrent moderate or greater MR is paramount in broadening our understanding of mitral valve repair failure in ischemic cardiomyopathy, and in applying the optimal surgical strategy in this patient population. Importantly, a Ring MVr augments the posterior leaflet tethering that is present in ischemic MR by: (I) displacing the posterior mitral annulus anteriorly, which increases the posterior leaflet tethering angle and its distance from the subtending papillary muscles; (II) restricting posterior leaflet motion and effectively creating a single anterior leaflet valve; and (III) increasing the strain on the inferolateral myocardial wall segments (11-13) (Figure 1). The LV-mitral valve ring mismatch parameter represents the imbalanced anatomic spatial relationship between the annulus and LV, with larger ratios indicating more disproportionate undersizing of the ring annuloplasty with regards to the LV size. It can be inferred that the geometric perturbations imparted by the Ring MVr, are more pronounced with increasing LV-mitral valve ring mismatch. Additionally, an earlier subgroup analysis of the severe ischemic MR CTSN trial identified the presence of an inferobasal aneurysm as a powerful predictor of recurrent moderate or greater MR after Ring MVr (14). The LV-mitral valve ring mismatch ratio accounts for the presence of an inferobasal aneurysm, which increases the size of the internal LV dimension. 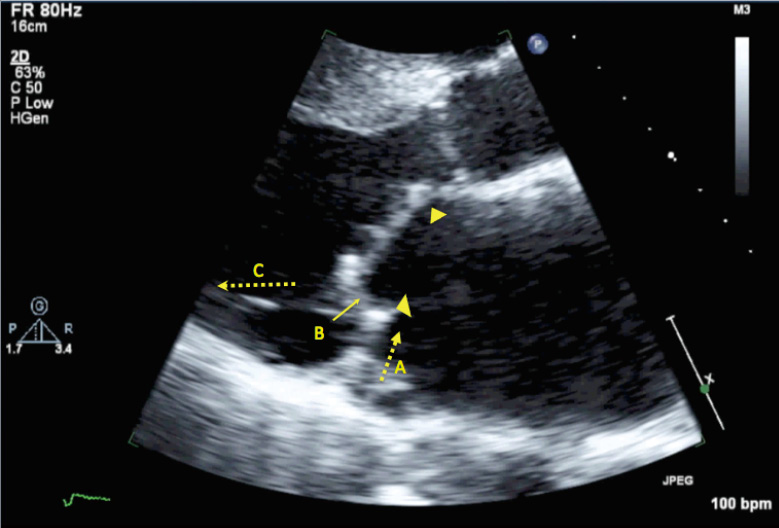 By incorporating these important findings from the CTSN trials, a pathophysiology-guided strategy to mitral valve surgery for ischemic MR is feasible. In addition to calculating the predicted LV-mitral valve ring mismatch ratio, other important echocardiographic mitral geometric indices that predict MR recurrence include a baseline mitral valve tenting height ≥11 mm, a mitral valve tenting area ≥2.5 cm2, and an end-systolic interpapillary muscle distance >20 mm (7,15). In the presence of a large predicted LV-mitral valve ring mismatch ratio and/or echocardiographic predictors of recurrent MR, a chordal-sparing mitral valve replacement may be preferable to a Ring MVr. Indeed, in the severe ischemic MR CTSN trial, the prevalence of recurrent moderate or greater MR with a chordal-sparing mitral valve replacement was 3.2% at 2-year follow-up, as compared with 58.8% in the Ring MVr group (P<0.001) (9). Alternatively, the application of an adjunctive subvalvular intervention may permit the effective use of mitral valve repair in this setting. These procedures include papillary muscle approximation, plication, and relocation, and secondary chordal cutting, which relieve papillary muscle displacement and leaflet tethering (16,17). When compared with a Ring MVr alone, combining a Ring MVr with a subvalvular intervention may decrease mid-term mortality and the development of recurrent moderate or greater MR, and improve LV reverse remodeling and heart failure symptoms (18-20) (Figure 2). 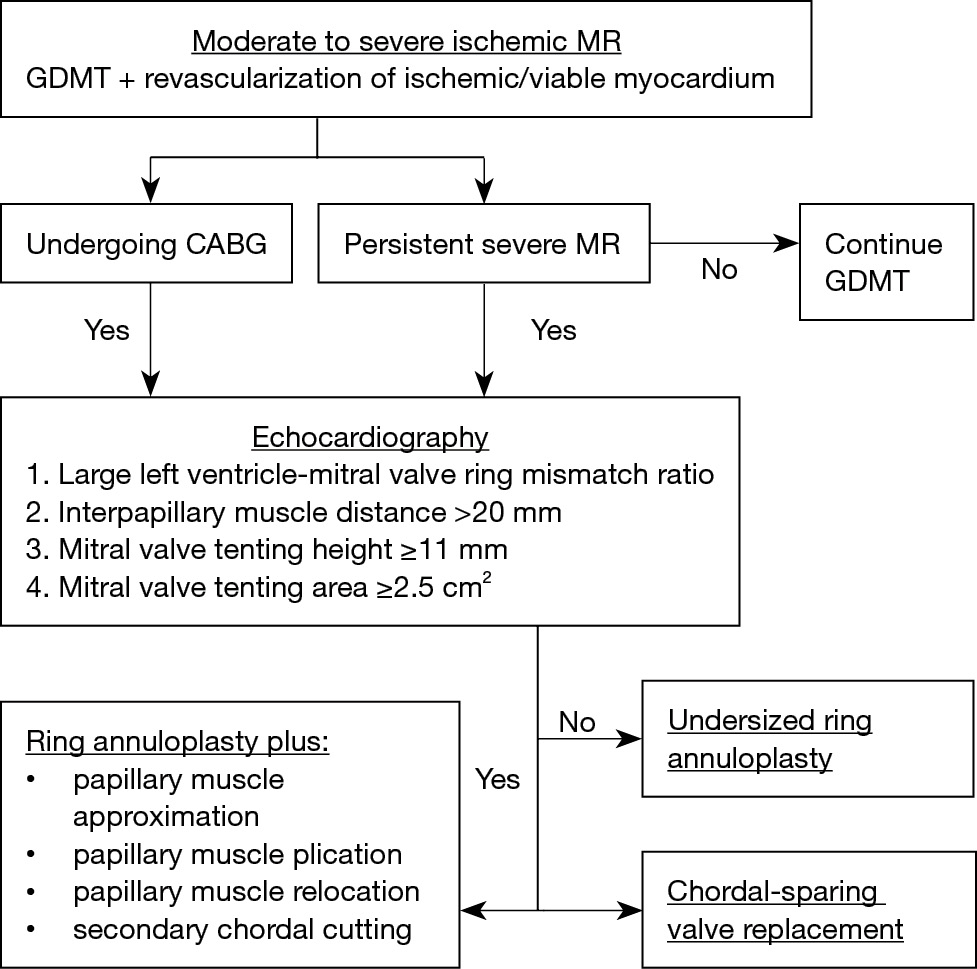 In conclusion, the development of ischemic cardiomyopathy and concomitant MR remains a vexing clinical problem for cardiologists and cardiac surgeons alike. The CTSN trials, and the insight gained from the subgroup echocardiographic analyses, have furthered our understanding of the complex interactions between LV remodeling, mitral valve apparatus geometry, and the application of surgical mitral valve interventions in ischemic MR. Future randomized trials comparing mitral valve surgical strategies, in which patient allocation is determined by pre-operative risk assessment of recurrent MR with parameters such as LV-mitral valve ring mismatch and echocardiographic mitral geometric indices, are eagerly awaited.