The association between bacteria and urinary stones

USD is an expanding problem. Approximately 10% of people will have a urinary stone during their lifetime (1). The United States health care burden from USD is immense with 185,000 hospitalizations, 2 million outpatient visits and 2.1 billion dollars expended annually for management (2-4). Historically, a key component in urinary stone formation is supersaturation, a process by which the concentration of substances in urine, such as calcium and oxalate, exceed the limits of their solubility (5). However, considerable overlap in urine chemistries exists between individuals with and without USD (6-8). Furthermore, supersaturation with calcium oxalate (CaOx) or calcium phosphate (CaPhos) is not different in recurrent USD patients compared to controls (9). Thus, although supersaturated urine is a risk factor, alone it is insufficient for stone formation. This conclusion is supported by the knowledge that treatment with dietary modifications, increased fluid intake, citrate salts and/or thiazide diuretics to reduce urine CaOx supersaturation only moderately improves recurrence rates (10-12). Despite these treatment strategies, USD prevalence in US adults and children has recently increased by 40% and 23%, respectively (13,14). Identification of other factors that contribute to CaOx and/or CaPhos stone formation (lithogenesis) is a critical need. The bacterial contribution to USD formation has long been recognized. Magnesium-ammonium-phosphate (struvite) stones (a conglomeration of bacteria, crystals and protein matrix) form due to urinary tract infection (UTI) with urease-producing bacteria (15). However, struvite accounts for only 4% of urinary stones. In contrast, CaOx is found in greater than 60% of urinary stones, while CaPhos is found in more than 40% (16). The objective of this review is to discuss emerging evidence indicating that bacteria might contribute to CaOx and/or CaPhos USD.

USD relevance of the microbiota

A number of conditions, including obesity, childhood onset asthma, and cardiovascular disease are associated with disruptions to the microbiota—the microbes that inhabit the human body (17,18). In USD, most published microbiota research papers have focused on the intestinal flora. For example, intestinal colonization with Oxalobacter formigenes, which degrades oxalate, is associated with lower urine oxalate levels and fewer recurrent stones; though a protective effect of exogenous Oxalobacter remains unconfirmed (19). Emerging evidence indicates that bacteria are present in and contribute to vascular calcifications (20,21). Therefore, it is possible that bacteria also are present in and contribute to urinary calcifications.

UTI and USD occur in the same patients

In a whole population survey of Taiwan, a UTI history was the most common associated condition in children with newly diagnosed USD (22). Overall, 34% of children (44% of females and 24% of males) diagnosed with USD had a history of UTIs (22). In contrast, the reported childhood UTI prevalence is only 8% (23). The association between UTI and USD extends into adulthood. For example, in a retrospective review of 1,325 adults admitted for USD to a Swedish hospital over a 7-year period, 28% had a positive standard urine culture (24).

Bacteria can be cultured from urinary stones

In addition to the aforementioned association between culture-positive urine and USD, bacteria can be cultured from the stones themselves. Studies from 1973 to the present in both Asia and North America have demonstrated that bacteria can be isolated from approximately 15–70% of stones following clinical culture (Figure 1) (25-28). When limited to CaOx stones, 13% to 44% of cultures were positive. E. coli and Pseudomonas spp. were the most common bacteria isolated from stone cultures, followed by the urease-splitting bacteria typically involved in struvite stone formation (Figure 2) (26-28). However, the reported results may under-represent the bacteria in urinary stones because the standard urine culture protocols used by clinical microbiologists are designed to identify clinical infections by known uropathogens. These protocols are not conducive to growth by slow growing, fastidious or anaerobic bacteria, which comprise the vast majority of bacteria found in urine (29). 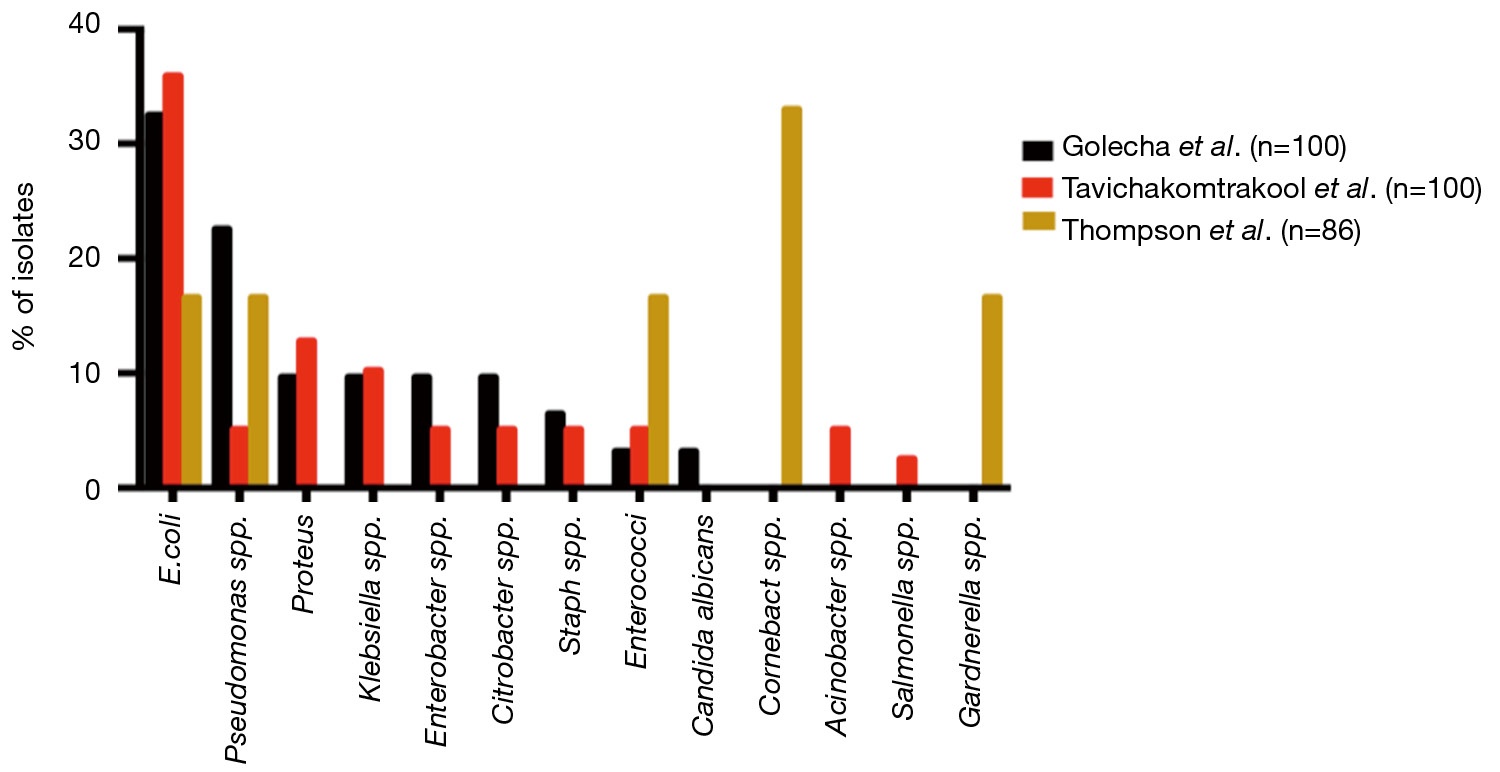 To expand detection and identification of bacteria in low biomass samples such as urine, we developed enhanced quantitative urine culture (EQUC) (30). EQUC incorporates more urine volume and a longer incubation period, along with multiple media types and atmospheric conditions (30). In addition to enhanced culture techniques such as EQUC, 16S rRNA gene sequencing of bacterial DNA has resulted in a paradigm shift in our ability to study the microbiome (the genomes of the microbiota). 16S rRNA gene sequencing and enhanced culture are complementary, as the sequencing identifies bacteria that cannot be cultured but generally cannot classify below the genus level, while enhanced culture actually isolates the bacteria. These isolates can then be identified more precisely (down to the species and even strain level) and, most importantly, can be used to study biological relevance.

Bacteria can be sequenced from urinary stones

In 2015, we published a microbial study of five kidney stones along with both upper tract urine and bladder urine obtained during the stone removal procedures (31). The patients’ ages were between 12 and 29 years; four of them had documented CaOx stones (31).

In each stone, 16S rRNA gene sequencing identified multiple bacteria. Some of these bacteria were expected and consistent with historical stone cultures (29) and/or past sequencing reports of human urine (32-36). Expected bacteria included Pseudomonas, Gardnerella, Lactobacillus and Enterobactericeae, a large family that includes E. coli (31). Other bacteria were unexpectedly detected, particularly Brucella (31). Despite our best efforts, we were unable to successfully complete targeted sequencing of this organism and thus cannot confirm its identity. However, we speculate that it was actually Ochrobactrum, a close relative of Brucella that is often indistinguishable from Brucella by 16S sequencing (37). Intriguingly, Ochrobactrum has been identified in the urine (38).

Although this initial study did demonstrate that 16S rRNA gene sequencing can consistently detect bacterial DNA in urinary stones, studies with larger numbers of patients are needed to comprehensively characterize the bacteria typically present in urinary stones.

Pyelonephritis and CaOx nephropathy potentiate each other

Whereas 16S rRNA gene sequencing and EQUC consistently detected the presence of bacteria in the limited number of urinary stones that we analyzed, it is not known whether the association between bacteria and USD is causal, disease modifying or merely coincidental. To further evaluate the association between USD and bacteria, we compared the renal bacterial burden and CaOx deposit number per cross section in mice with CaOx nephropathy and pyelonephritis by transurethral inoculation of uropathogenic E. coli (UPEC) induced alone and in combination (31). The combination of CaOx and experimental pylenonephritis resulted in a 130-fold higher bacterial burden than experimental alone (31). Conversely, the CaOx deposit number normalized to mean cross section area was 2.7-fold higher when both CaOx and UPEC were present compared to CaOx nephropathy alone (31).

Mechanisms by which bacteria may contribute to USD

If bacteria do indeed contribute to CaOx USD, what are the potential mechanisms? One possibility is that bacteria adhere to crystals. This mechanism is supported by findings that some bacteria selectively aggregate to certain crystal types but not others and that bacteria are associated with an increased number of crystal-crystal agglomerations. Compared to CaOx dihydrate and control silicon dioxide crystals, increased bacterial aggregation was noted around CaOx monohydrate crystals (31). Others have reported similar results. For example, Chutipongtanate and colleagues demonstrated that bacteria such as E. coli and Klebsiella pneumonia increased the number of CaOx crystal aggregates compared to blank or intact red blood cell control (39). Another way that bacteria could contribute to USD is bacterial production of citrate lyase, which could decrease the urine citrate levels that lead to supersaturated urine and crystal formation. In support of this potential mechanism is the finding of De Ferrari and colleagues, who demonstrated mean urine citrate, was 2-fold lower in 17 standard urine culture-positive patients compared to 30 standard urine culture-negative patients (40). Lastly, bacteria-crystal aggregates may bind to the tubular epithelium resulting in expression of stone matrix proteins in either renal tubular epithelium or inflammatory cells. The stone matrix proteins may be the component that, at least in part, differentiates crystalluria from progression to stone formation. In our murine CaOx nephropathy model, the combination of CaOx and UPEC significantly increased S100A9 mRNA expression over control, CaOx alone or UPEC alone by a factor >50-fold. A similar pattern was seen with osteopontin.

Bacteria and USD are clinically associated because they often occur in the same patients and USD patients often have positive urine and/or stone cultures. Whether they are mechanistically associated is an emerging research topic. Selective aggregation to some crystal types seen in USD patients, increased crystal clumping in the presence of bacteria, bacteria-induced lower urine citrate levels and increased CaOx deposits and stone matrix protein expression when bacteria are present as opposed to CaOx deposits alone are initial findings that might provide the basis to begin to unravel the reasons for the clinical USD-bacteria associations. Important future directions will include: (I) sequencing a larger number of stones to determine if the bacteria present are consistent between stone composition and other covariates such as sex and age and (II) devising model systems to test mechanistic overlap between USD and the bacteria isolated from urinary stones.

John Ketz’s review of the manuscript is acknowledged. AL Schwaderer has consulted for Allena Pharmaceuticals. AJ Wolfe is the Principal Investigator of Investigator Initiated Studies funded by Astellas Scientific and Medical Affairs and by Kimberly Clark Corporation.

Funding: AJ Wolfe is supported by NIH grants P20 DK108268 and R01 DK104718. AL Schwaderer is funded by NIH grants R01 DK106286 and R01 AG050801. Our funding sources have had no role in design or conduct of our studies; collection, management, analysis, and interpretation of our data; or in preparation, review, or approval of this or any other manuscript.