In order to improve the outcome of CKD patients, it is important to identify high risk patients at early stage of CKD, and to provide an effective therapy. Until today, however, we don’t have enough biomarker; for example, neutrophil gelatinase-associated lipocalin and liver-type fatty acid-binding protein showed even lower correlation factors with eGFR than urinary albumin (3). However, the association between albuminuria and CKD has low sensitivity and specificity (4). Urine sample is attractive as a rich source of biomarker for human kidney diseases, because urine collection is not invasive, and may reflect the kidney injury. Studies, directing the differences in urine samples between healthy subjects and CKD patients, showed the risk factors associating with the progression of kidney diseases (5,6). The diagnostic/prognostic analysis between urinary peptides and eGFR using large cohort, however, may lack pathological point. On the other hand, the investigation using biopsy specimen can obtain the histological information, but is invasive. And the population of the cohort may be small.

Ju et al. in Sci Transl Med (7) demonstrated that urine epidermal growth factor (EGF) is a noninvasive prognostic biomarker for CKD progression using a renal biopsy transcriptome-driven approach from the European Renal cDNA Bank (ERCB). They examined the ability of the candidate gene transcript to predict patients’ eGFR at time of biopsy. Among six genes [nicotinamide N-methyltransferase (NNMT), EGF, thymosin β 10 (TMSB10), tissue inhibitor of metalloproteinases 1 (TIMP1), tubulin α 1a (TUBA1A), and annexin A1 (ANXA1)] showing the best predictive ability, they selected EGF, because (I) EGF mRNA expression was correlated with eGFR in other two validation cohorts; (II) EGF expression was kidney-specific, and restricted to the thick ascending limb of Henle and distal tubules (8); and (III) EGF enhances renal tubule cell regeneration and repair and accelerates the recovery of renal function after injury (9,10). Of interest, they demonstrated that urine EGF protein-to-creatinine ratio (uEGF/Cr) correlated significantly with the intrarenal EGF mRNA expression in 34 C-PROBE and 85 Nephrotic Syndrome Study Network (NEPTUNE) patients (7). As altered urinary EGF excretion is concordant with altered intrarenal EGF expression, uEGF/Cr may in part reflect transcript of EGF from the injured tubules per se, and be illustrating the intrinsic renal pathological changes. Among the candidate gene transcript, EGF expression was downregulated according to the decreased GFR. In case of upregulated transcripts, urine protein may be affected by glomeruli-filtrated protein, and may not add significant prognostic value to albuminuria. It was reported that serum EGF level was quite low compared with urine EGF levels, and no correlation between serum and urine concentration existed (11). Correlation between uEGF/Cr and eGFR was shown in independent three cohorts composed of diabetic nephropathy, focal segmental glomerulonephritis, minimal change nephrotic syndrome, membranous glomerulonephritis, and IgA nephropathy. In addition, uEGF/Cr showed only a weak negative correlation with urinary albumin-to-creatinine ratio. These observations suggest that uEGF/Cr could reflect the pathological changes common in a variety of kidney diseases, and represent a different pathophysiologic mechanism than that detected by albuminuria. In fact, uEGF/Cr was correlated with histological scores of interstitial fibrosis and tissue atrophy. Furthermore, uEGF/Cr predicted the CKD progression assessed by eGFR slope.

EGF activates cells via the EGF receptor (EGFR), which is involved in the various biological processes including proliferation, metabolism, differentiation, and survival (12). EGF is a potent mitogen to proximal tubular cells in primary culture (13). Many reports showed that EGFR signaling was also involved in the development and progression of renal disease. Proximal tubular cells (13) as well as cells from more distal tubular cells express EGFR. EGF expression was observed in the thick ascending limb of Henle and distal tubules (8), EGF activates tubular cell proliferation in autocrine/paracrine manner. Decreased renal expression and urinary excretion of EGF has been observed in various human kidney diseases, including diabetic nephropathy (14), IgA nephropathy (15), acute kidney injury (16), and lupus nephritis (17). Recently, Betz et al. (14) demonstrated that uEGF decreased early in the development of the disease in the Cyp1a1mRen2 model, in which streptozotocin-induced hyperglycemia develops in parallel with renin-dependent hypertension. Interestingly, EGF expression was also reduced at the renal transcriptional level in this rat model. These observations confirmed the results of Ju et al. (7). The clinical utility of a biomarker for CKD depends on its ability to predict the risk of the development of end stage kidney disease. An important strength of the study by Ju et al. (7) is to have examined the renal EGF expression and uEGF excretion in several large cohort, and showed the predictive value of uEGF in a variety of CKDs.

The activation of EGFR has been reported to result in favorable or harmful outcomes, depending on the individual situation (Figure 1). Acute kidney injury model showed that EGFR activation promotes renal tubular cell proliferation. Activation of EGFR by exogenous EGF, can promote recovery from acute kidney injury (9). However, recent studies demonstrated that EGFR activation leads to the development and progression of renal diseases (15). In the development of diabetic nephropathy, hypertensive nephropathy, or polycystic kidney disease, EGFR activation may be involved. Numerous stimuli can activate the EGFR, beyond EGF itself, including high glucose and angiotensin II as well as EGF ligands like TNF-α. Dominant negative EGFR overexpression mice exhibited less interstitial fibrosis than wild type mice after subtotal renal ablation or following angiotensin II infusion (18). It was also reported that EGF-EGFR axis regulates sodium transport and development of hypertension (19). In this point of view, decreased EGF may be beneficial by inhibiting the activation of EGFR. Future studies may elucidate the mechanism of EGF-EGFR axis in the development of CKD. 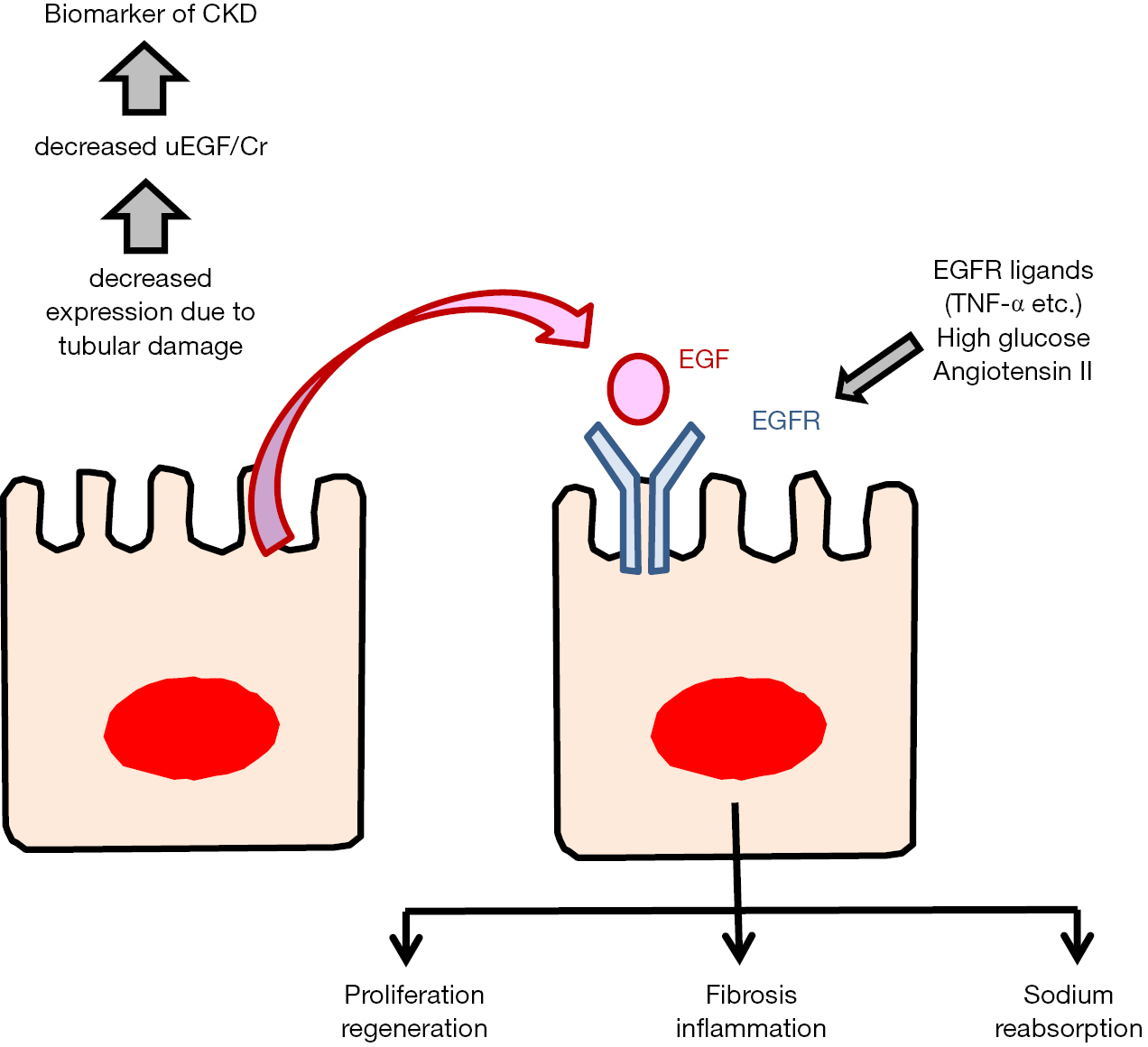 It was reported that tubulointerstitial score rather than glomerular injury correlated with the decline of the renal function (20). Thus, it is reasonable that tubular proteins such as EGF, reflecting tubular cell damage, may be better predictive biomarkers than albuminuria. It makes sense that uEGF/Cr correlated with the EGF expression in renal biopsy specimen and eGFR at the time of renal biopsy, and that predicted the eGFR decline in the study by Ju et al. (7). Furthermore, these observations were validated in other cohorts consisting of a variety of kidney diseases. uEGF seems useful to predict the CKD progression. However, it remains unclear whether uEGF can improve the current clinical setting in managing the CKD patients. It is also uncertain whether decreased EGF expression only reflects the damaged tubules or decreased EGF affects the development of tubulointerstitial injury. Future studies may dissolve the questions whether treatment to increase uEGF/Cr or supplementation of EGF may improve the prognosis of the CKD patients.