Azoramide: a new drug for the treatment of type 2 diabetes?

Type 2 Diabetes Mellitus (T2DM) is a worldwide disease and according to estimations made by World Health Organization (WHO) by the year 2030, it will be the 7th cause of death in the world (1). During the progression to T2DM, in pre diabetic stage, there is a massive expansion of pancreatic beta cells to compensate insulin resistance and cope with the increased demand of insulin. Concomitantly, these cells present an overwhelmed endoplasmic reticulum (ER) and ER stress (2). The unfolded protein response (UPR) is an adaptive mechanism to counteract the increased protein synthesis and the folding capacity of the ER, alleviating the ER stress. The UPR consists of three sensors proteins; inositol requiring 1 (IRE1-alpha), PKR-like ER kinase (PERK) and activating transcription factor 6 (ATF6). They are inserted in the ER membrane and ensure the protein folding capacity of the ER, avoiding the accumulation of unfolded proteins inside this organelle (3). The UPR facilitates ER function by different mechanisms, maintaining cell function and cell survival. However, if the situation becomes chronic, UPR initiates cell disruption and apoptosis (4). At steady-state the three sensors are associated with glucose-related protein 78 (GRP78/Bip), a resident ER chaperone. When there is an accumulation of misfolding proteins in the lumen, Bip detaches from them and this initiates the activation of the three branches of UPR (5). Once activated, the UPR regulates several cellular effects by different strategies: transient inhibition of protein translation by phosphorylation of the eukaryotic translation initiation factor (eIF2-alpha) via PERK, increase production of ER chaperones to maintain ER homeostasis, such as Bip, and induction of genes required for endoplasmic reticulum-associated degradation (ERAD) system. Depending on the cell type or the inducer of ER, different responses are triggered. For example, in pancreatic β cells, PERK pathway is essential to properly respond to ER stress. The elimination of this signaling pathway in β cells, makes them more susceptible to cell death (6-9). Furthermore, UPR regulates the expression of death inducers (10). When the UPR cannot restore ER homeostasis, caused by genetic mutations or chronic exposure to long chain free fatty acids (FFAs) or cytokines (11,12), UPR activation stimulates apoptosis. In that case, the UPR acts as a switch promoting survival or cell death, depending on the nature of the ER stress (10). Different chemical chaperones, such as 4-phenyl butyric acid (PBA) and tauroursodeoxycholic acid (TUDCA), have been applied to increase ER response, insulin sensitivity and to improve pancreatic β cell function in rodent animals with metabolic disease (13-15). In this paper, Fu and colleagues (16) describe a potential drug candidate to improve ER capacity by using a new technology designed and developed at the Harvard T. H. Chan School of Public Health. The development of a dual luciferase reporter system, allowed the authors to monitor ER function in live cells, analyzing at the same time ER protein folding activity as well as chaperone capacity. Using this technology, they identified azoramide as a new drug candidate which improves ER folding capacity in the cells. It is important to highlight that azoramide modulates ER function in the absence of any cellular toxicity or cell death. In fact, during the whole study, the team analyzed in parallel the effect of azoramide with thapsigargin which is a well-known ER stressor. The authors observed that C/EBP homologous protein (CHOP), a factor that is up-regulated when cells are committed to die by apoptosis and this effect was only detected in response to thapsigargin treatment and not with azoramide. In addition, the authors measured the thapsigargin-induced Ca2+ increased in the cytosol by the non-competitive blockade of sarcoplasmic/endoplasmic reticulum Ca2+ adenosine triphosphatase (SERCA) pumps in the membrane of the ER. However, azoramide provoked retention of Ca2+ in the lumen of the ER, which indicates that azoramide treatment could enhance SERCA activity, at least in part, by the induction of the protein levels observed of the SERCA protein in the ER. The molecular basis of the dual reporter system consists in two constructs that express either the luminal domain of ATF6 (ATF6LD) or the membrane protein asialoglycoprotein receptor 1 (ASGR), fused to a reporter gene that encodes luciferase Cluc. ATF6LD binds to the ER chaperone Bip/GRP78 and mediates its ER retention under no stress condition. Then, in the absence of any stress, ATF6LD would maintain the interaction with the chaperones and retain the fusion protein in the ER, and should display a low level of luciferase activity. In contrast, a reduced chaperone expression should facilitate the liberation from the ER, increasing luciferase secretion into the medium.

The other part of the dual reporter system is the production of a slow-maturing protein ASGR1-cluc. ER stress diminished the secretion of this protein and, after interventions to correct the proper folding capacity, increased luciferase activity. Using chemical inhibitors and genetic deletion of the different UPR sensors, it was determined that azoramide requires for the fully chaperone activity, an intact IRE1-alpha and PERK signaling pathways. Besides, the authors demonstrated using animal models of obesity (ob/ob mice) and T2DM (male mice fed with a 60% high fat diet (HFD), that azoramide improved glucose homeostasis, insulin resistance as well as pancreatic beta cell function. In addition, these effects were corroborated in cultured cell lines in vitro, using a treatment with palmitate, a fatty acid that induces insulin resistance in MIN6 and INS-1 cells (17).

The data provided in this paper shows that small modulators of the UPR pathways can be useful for the treatment of different pathologies that occur with ER stress rise. In fact, azoramide could be useful for the treatment of any other diseases with ER dysfunction and protein misfolding such as cystic fibrosis, Huntington’s disease and Alzheimer’s disease. In the Figure 1 it is depicted the proposed mechanisms of action of azoramide on ER stress. 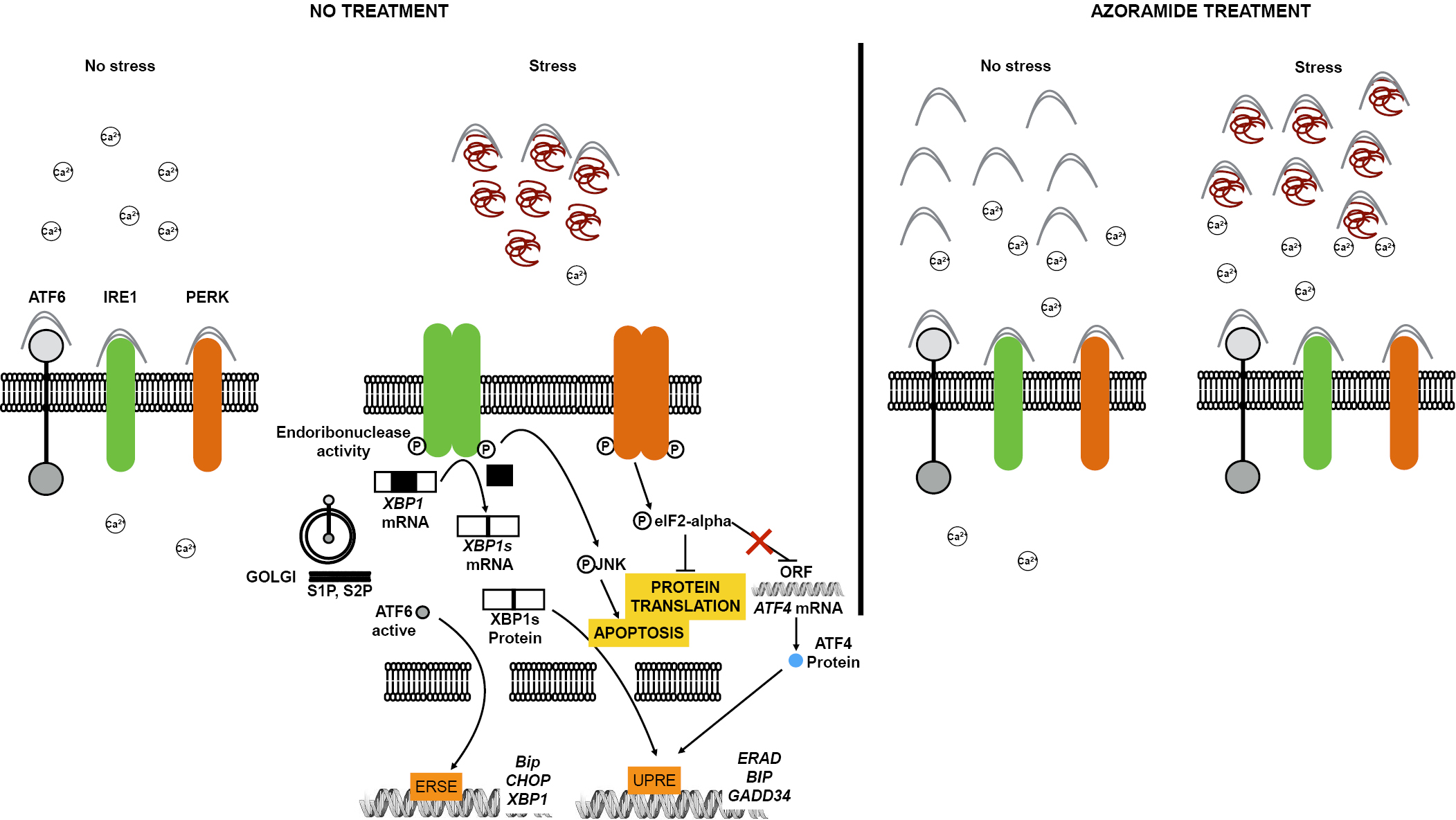 In summary, Fu et al. described a novel and promising functional assay in Science Translational Medicine that allows the identification of molecules that chemically target ER stress. Their findings suggest that azoramide to modulate ER stress and would be a useful drug for the treatment of diabetes and even in pre-diabetic states.

I thank Liliana Perdomo Loaiza and Mathieu Gilbert for their helpful and critical comments on this written manuscript.