ASSURE S-TRAC: conflicting results of adjuvant treatments for kidney cancer in the era of targeted agents and genomics

On March 8, the final results of the ASSURE trial of adjuvant therapy for high-risk resected kidney cancer were published online on Lancet (1).

Authors concluded that their results “… provide a strong rationale against the use of these drugs …”—i.e., vascular endothelial growth factor receptors (VEGFRs)-targeting agents—“… for high-risk kidney cancer in the adjuvant setting and suggest that the biology of cancer recurrence might be independent of angiogenesis” (1).

Thus, ASSURE joined a long list of adjuvant trials which yielded not simply negative, but often detrimental results, as demonstrated by a recent meta-analysis (2).

As it appears from the above conclusive sentence of the abstract of the ASSURE trial publication, what afflicted most the researchers was the failure of this study to confirm the VEGF/VEGFRs pathway as a rational target for adjuvant treatment in patients radically resected for a localized kidney cancer, despite the well known high dependancy of the majority of kidney cancers (at least those of clear cell histology) from VEGF/VEGFRs-driven angiogenesis (3).

Is this the only and most correct way to read the results of this study?

Probably not, in our opinion.

First, the rational of using a relatively short antiangiogenic treatment in the adjuvant setting could be considered not so strong.

Indeed, from the first pioneeristic studies conducted by Judah Folkman in Boston, to more recent preclinical data with modern antiangiogenic agents, it appears clear that the inhibition of VEGF-induced angiogenesis is quickly reversible at treatment discontinuation. For example, an elegant paper by Mancuso et al. (4) showed that empty sleeves of basement membrane and accompanying pericytes provide a scaffold for rapid revascularization of tumors after removal of anti-VEGFRs therapy, even when a potent third generation tyrosine kinase inhibitor (TKI) such as axitinib is used; and this revascularization takes just days, not months or years.

Given these considerations, it is hard to believe that a temporally limited treatment with an antiangiogenic agent (like in the case of ASSURE) could positively impact on the risk of relapse of a tumor such as kidney cancer, which quite often relapse years, if not decades (5), after the resection of its primary site.

If so, should we disregard VEGFR-TKIs as a possible adjuvant treatment for kidney cancer, and thus expect negative results also from all the other adjuvant studies presently ongoing?

Despite all the above considerations, this seems not to be the case, since very recently positive results of the S-TRAC study, in which sunitinib was tested as an adjuvant treatment, were published (6). Someway surprisingly, the study yielded positive results; indeed, the median duration of DFS (the primary endpoint of the study) was 6.8 years (95% CI: 5.8 to not reached) in the sunitinib group and 5.6 years (95% CI: 3.8−6.6) in the placebo group (HR: 0.76; 95% CI: 0.59−0.98; P=0.03). It is thus clear that the above figure will give new hope for those who will suffer from this disease in the future.

However, why sunitinib in one study (i.e., ASSURE) failed, and in another (i.e., S-TRAC) succeeded?

A possible answer could be patient selection; and indeed, from a staging viewpoint inclusion criteria of the adjuvant studies using VEGFR-TKIs differed in several key characteristics (Table 1). 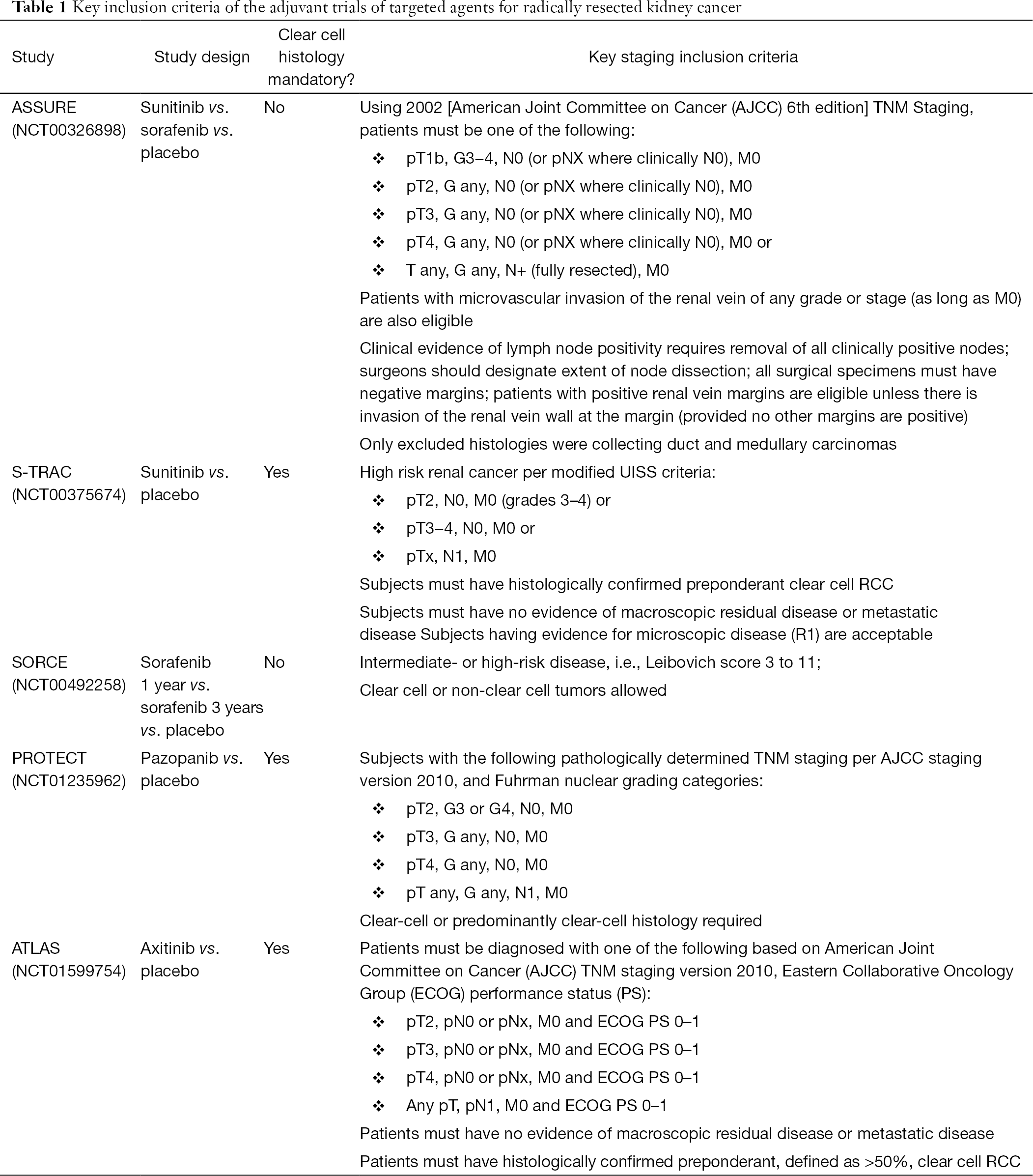 In particular, in ASSURE, patients with pT1b tumors were allowed (provided a Fuhrman’s grade of 3 or 4), while in the S-TRAC study, pT1 patients without nodal involvement weren’t allowed; furthermore, the histological presence of at least a component of clear cell was mandatory in S-TRAC, but not in ASSURE.

Furthermore, a significant heterogeneity exists amongst presently available nomograms aimed at estimating the risk of recurrence in localized kidney cancer. As highlighted by Pal and Haas in a recent provocative review paper (7), using different nomograms or scoring systems, the risk of recurrence varies widely. The Authors made the examples (7) of a patient with a pT2, N0 disease (Fuhrman grade 2) who would have a 5-year DFS estimate of 85.4% by the Leibovich nomogram (8), as compared to 66% by the Kattan nomogram (9); similarly, for a patient with pT3, N0 disease (Fuhrman grade 3), the 5-year DFS estimate would be 50% by the Leibovich nomogram (8), vs. 74% by the Kattan nomogram (9).

Moreover, we should acknowledge that the vast majority of the characteristics included in the main nomograms or prognostication scores used to stratify patients in adjuvant trials are definitely not objective, with the unique exception of tumor stage (and size). Indeed, tumor grading is operator-dependant [not to take into account the fact that Fuhrman’s grading has been presently substituted by the novel International Society of Urological Pathology (ISUP) nucleolar grading system] (10), Eastern Cooperative Oncology Group (ECOG) Performance Status is not objective too, and even nodal status isn’t; indeed, lymphadenectomy is presently performed almost uniquely when enlarged or suspiciuos lymphnodes are evident, either at pre-operative work-up, or at the sight of the operating Urologist. Furthermore, among all the criteria included in the risk scoring systems we do use, just the presence of necrosis, included in the Leibovich nomogram (8)—used in the SORCE adjuvant trial, quite superficially reflects the biology of the tumor, or of the relationships between the tumor and the host.

Thus, selection of patients with different degrees of risk of relapse due to the use of different, and not univocal, risk stratification criteria, may account for the different results of different trials.

How to try to solve all these issues, better interpret the results of completed or presently ongoing studies, and design more appropriately the next generation of adjuvant trials for kidney cancer?

The answer probably is to head to genetics.

Indeed, a genetic recurrence score (RS) to predict the risk of recurrence in radically resected kidney cancer patients has been recently developed and validated (11).

Initially, the association between expression of 732 genes, measured by reverse-transcription Polymerase Chain Reaction, and clinical outcome in a large cohort of patients with stage I–III clear cell kidney cancer who had undergone nephrectomy at the Cleveland Clinic was studied; 516 genes were then associated with recurrence-free interval and 11 of these genes were selected by further statistical analyses. These 11 genes were combined with five reference genes, from which a RS algorithm was developed. The RS was then validated in an independent cohort of stage I to III radically resected patients from France. The association between the RS and the risk of recurrence as well as cancer-specific survival in the first 5 years after surgery was then assessed, stratified by tumour stage (stage I vs. stage II vs. III). Thus, RS proved able to identify a clinically relevant proportion of patients with both stage I and II-III kidney cancers with a very low risk of recurrence and, more importantly, also a significant number of stage I patients with more than 20% risk of recurrence at 5 years (11).

However, beyond those genes considered in the RS, other genes have been proposed to play a prognostic role in kidney cancer; in another elegant paper (12), the University of Texas Southwestern (UTSW) group showed that the expression of PBRM1 and BAP1 genes were correlated with a different survival, worst for BAP1-expressing tumors, a finding that was externally validated using the The Cancer Genome Atlas (TCGA) network cohort; furthermore, the co-expression of the two genes, although a rare event, contributed to confer a particularly poor prognosis to patients (12). Notably, 80% of patients from both the development, as well as the validation, cohort had localized, or loco-regional, disease making this series of kidney cancer patients similar, although not identical, to that used to develop the RS.

Despite all the above novelties, unfortunately none of the recently completed or ongoing adjuvant trials with targeted agents has been already prospectively implemented with genetic analyses such as the RS. Thus, one could speculate if this score could help us to understand why Sunitinib, as an adjuvant treatment, failed in the ECOG ASSURE trial, while succeeded in the S-TRAC one.

However, relative to these genomic analyses, other issues remain open.

First of all, although ‘good’ and ‘bad’ genes have been identified so far, we still do not have clearcut mechanistical explanation of their biological role.

Furthermore, and more importantly, why BAP-1 and PBRM1, which in the UTSW/TCGA cohorts proved to be of prognostic value in a similar (although not identical) setting of patients, didn’t make the final set of genes within the RS?

Unfortunately enough, we cannot but conclude that, despite all the efforts made to date, and despite the huge amount of money put into the development of precision medicine by many countries (13), it still appears to be more a political claim than a reality for all patients worldwide…especially in the field of the adjuvant treatment of kidney cancer.

Conflicts of Interest: C Porta acted as a consultant and/or speaker for Pfizer, Novartis, Exelixis, Ipsen, BMS, Eisai, Peloton and Roche-Genentech; S Chiellino has no conflicts of interest to declare.