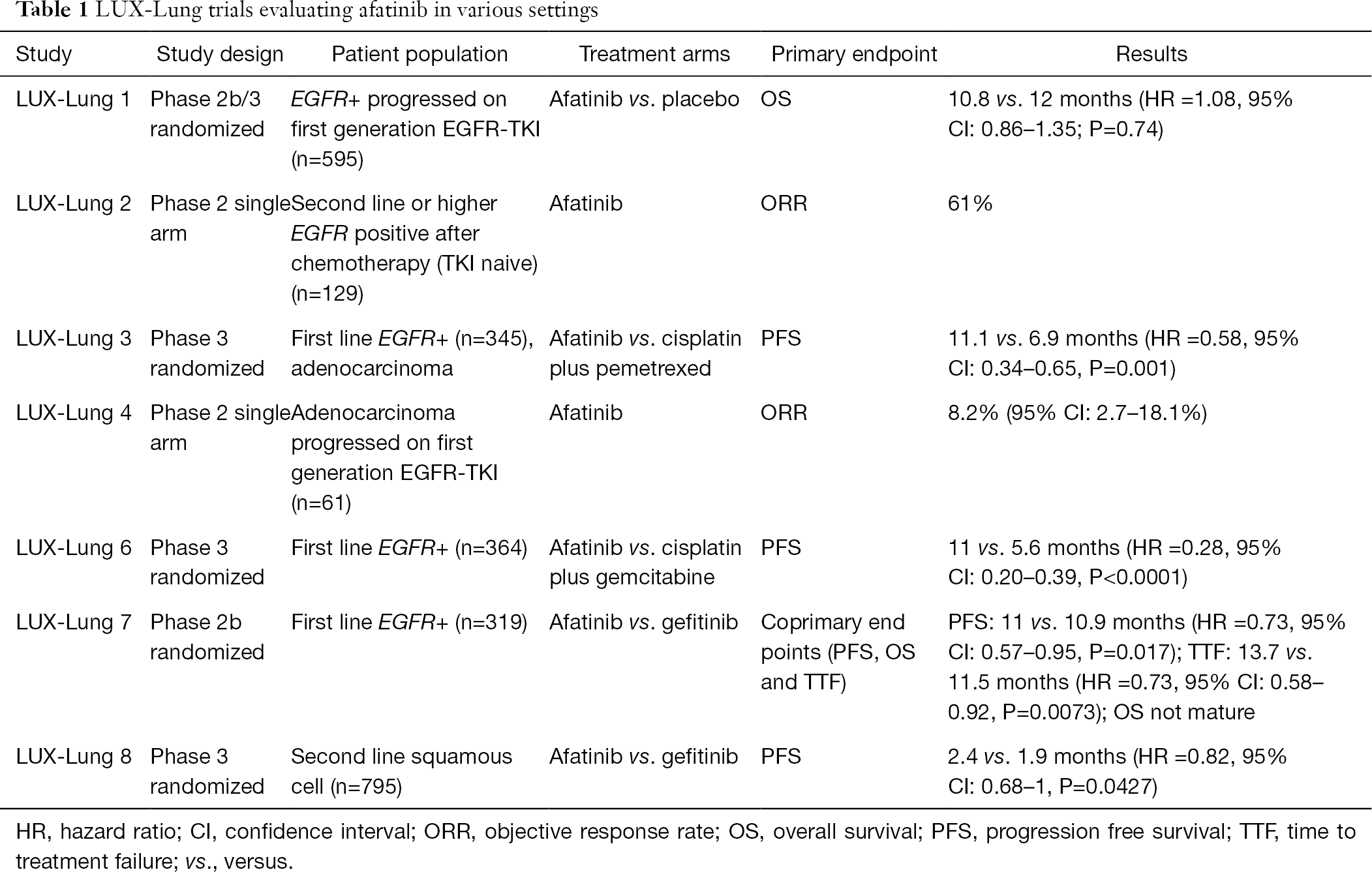 After an initial response to EGFR-TKIs, resistance develops invariably through various mechanisms including T790M mutations (50–60% of patients), MET amplification, epithelial to mesenchymal transformation, HER-2 amplification or transformation to small cell lung cancer (11). Development of acquired resistance is heterogeneous process with multiple mechanisms of resistance developing at separate metastatic sites in same patient or at the same site at different time points. Therefore, it is possible that radiographic progression at one site may not imply that all other sites would also be resistant to EGFR-TKI. Supporting this hypothesis, a flare phenomenon has been reported where discontinuation of EGFR-TKI for radiological progression, results in rapid, symptomatic progression at other sites attributed to presence of TKI sensitive clones (12). This phenomenon has given rise to concept of continuing EGFR-TKI beyond progression. Multiple retrospective studies have shown that EGFR-TKI can be continued beyond progression in combination with loco-regional (surgery, radiation) treatment or chemotherapy and may lead to better outcomes (13,14).

In the phase III LUX-Lung 5 trial (15), published in Annals of Oncology, Schuler et al. evaluated whether continuation of afatinib with paclitaxel is superior to paclitaxel alone after progression on EGFR-TKI in a cohort of lung cancer patients clinically enriched for EGFR dependency. The trial was conducted in two parts: part A enrolled patients who had progressed on one or more chemotherapy regimen, had a clinical benefit (complete response, partial response or stable disease) of ≥12 weeks on first generation EGFR-TKI (erlotinib or gefitinib) and must have attained ≥12 weeks of clinical benefit on afatinib monotherapy with subsequent radiologic progression. The patients weren’t screened for EGFR mutation status as it was not standard clinical practice at the time of study planning but were clinically enriched based on disease control with EGFR-TKI for ≥12 weeks. Patients in part A, who derived clinical benefit from afatinib monotherapy were then screened for randomization in 2:1 fashion to afatinib plus paclitaxel (based on pre-clinical evidence of synergism) versus dealer’s choice chemotherapy (part B). The primary end point was progression free survival (PFS), secondary endpoints included overall survival (OS) and objective response rate (ORR). The median PFS was significantly longer with afatinib plus chemotherapy versus chemotherapy alone [5.6 vs. 2.8 months, hazard ratio (HR) =0.60, 95% confidence interval (CI): 0.43–0.85, P=0.003]. The median PFS in the chemotherapy alone arm was the longest for paclitaxel (3.8 months). There was no difference in median OS (12.2 months) between the two groups. The ORR was 32.1% in the combination arm versus 13.2% in chemotherapy only arm (OR =3.41, 95% CI: 1.41–6.79, P=0.005).

Authors should be commended for successfully conducting a prospective randomized study in fourth line setting for treatment of lung cancer. The study was designed to address an important question of EGFR-TKI continuation beyond progression in combination with chemotherapy and showed that in selected patient population, continued EGFR blockade with chemotherapy may improve PFS compared to single agent chemotherapy after progression on EGFR-TKI monotherapy. Although LUX-Lung 5 provides prospective validation of this concept, its reliability and clinical utility is limited due to several factors. The study was underpowered as the initial number of 351 projected patients to part B was considered unachievable and not recruited. Of the 1,154 patients treated with afatinib monotherapy, 223 patients with clinical benefit of 12 weeks were screened and only 202 patients were randomized. Of the 299 patients with progression after initial benefit on afatinib monotherapy most declined participation due to general health deterioration. This high drop out in enrollment after progression on third line afatinib monotherapy suggests that most patients were not able to have subsequent treatment and patients who continued treatment might be part of a selected population with good performance status, low co-morbidity or even different disease biology.

Recently multiple reports have demonstrated that treatment of EGFR mutant patients after radiologic progression on EGFR-TKI can be complicated by the heterogeneous nature of progression (16,17). Clinical outcomes can be widely variable depending on the subtype of progression, which can be defined as single site, oligo-sites, central nervous system only, systemic or multi-site and asymptomatic or symptomatic. ASPIRATION was a prospective single arm trial in Asian EGFR mutant lung cancer patients, designed to evaluate effect of continuing TKI therapy after radiologic progression at the discretion of physician and patient. Results of this study showed that survival post TKI progression can be increased and systemic chemotherapy delayed for a select group of patients without compromising the OS (18). Although this study was limited by the nature of design, it showed that some patients may continue to have indolent course even after radiologic progression on EGFR-TKI. It is possible that most patients who went on to fourth line treatment in LUX-Lung 5 study had less aggressive disease and if patients were not classified based on type of progression, an imbalance in these subgroups between the two post afatinib progression arms could have created the difference in PFS.

Other trials of post progression first generation EGFR-TKI continuation with chemotherapy after initial benefit have not shown any advantage compared to chemotherapy alone. Our group had conducted a small randomized phase II study of chemotherapy (pemetrexed or docetaxel) versus chemotherapy plus erlotinib in patients with progression after initial clinical benefit from erlotinib. There was increased toxicity with addition of erlotinib to chemotherapy without any added benefit in response rate (13% vs. 16%) or PFS (5.5 vs. 4.4 months) (19). Similarly IMPRESS was a large randomized phase III trial investigating the role of continuing gefitinib in combination with chemotherapy for EGFR mutant patients after development of acquired resistance to initial treatment with gefitinib. The primary end point for the trial was PFS, which was same in two treatment arms (5.4 months) indicating lack of benefit with addition of gefitinib to chemotherapy (20). However an exploratory subgroup analysis suggested potential clinical benefit from continued gefitinib treatment after progression, if EGFR T790M was not found in circulating plasma DNA (21). One could argue that positive results in LUX-Lung 5 are related to use of second generation EGFR-TKI with irreversible EGFR inhibition and some activity against known mechanism of acquired resistance such as T790M mutation or HER-2 amplification.

The choices of chemotherapy in the chemotherapy only arm (a practical decision as there is no established standard fourth line) between the two arms makes the arms unbalanced. Also 13% of patients in the chemotherapy arm had received the same agent previously. In the absence of placebo arm, it is difficult to ascertain if chemotherapy alone had any significant effect on progression. Since we know from ASIRATION study that EGFR-TKI, when continued beyond progression can delay further tumor growth, it is possible that PFS advantage in the afatinib and paclitaxel arm could be entirely due to afatinib.

Serious treatment related adverse events were more common in the combination arm versus chemotherapy only arm (11% vs. 3%). It is interesting to note that 36% of patients in the chemotherapy arm received two additional lines of therapy versus 15% in the combination arm, implying a sizable proportion of patients overall went on to receive six or more lines of treatment, which is uncommon for most lung cancer patients treated outside the clinical trial.

LUX-Lung 5 study was more relevant at the time when it was conceived, since then multiple new agents have been approved or are in clinical trial for EGFR mutant patients with acquired resistance. Third generation EGFR-TKIs are the treatment of choice for patients with EGFR T790M mutations based on high response rate (61% and PFS of 9.6 months) and low toxicity secondary to sparing of wild type EGFR (22). Osimertinib is approved after progression on first or second generation EGFR-TKI in patients with T790M mutation. For those patients with non-T790M mediated resistance, combination of afatinib and cetuximab (23) has shown a response rate of about 30%.

Ideal future studies on patients with EGFR mutations should focus on preventing or delaying emergence of resistance and identifying targets for new resistance mechanisms. The LUX-Lung 5 study with its limitations of being underpowered amongst others is unlikely to find afatinib a new niche.