Immunotherapy in small-cell lung cancer: at what point are we?

Immunotherapy is a new frontier for the management of cancers with practice-changing trials already reported for unresectable or metastatic malignant melanoma, advanced non-small-cell lung cancer (NSCLC), and advanced renal-cell carcinoma (1). Considering these recent exciting developments, immunotherapy is being investigated in small-cell lung cancer (SCLC), too. Unfortunately, in the last decades, despite several treatment attempts and new strategic approaches investigated, SCLC outcomes have not improved. In fact, even if an objective response rate (ORR) with first-line chemotherapy was reached by most of the patients, they relapse within a year of treatment. At relapse, the response to first-line chemotherapy and its duration are the main factors in predicting the efficacy of salvage chemotherapy. In fact, based on these two factors patients who respond to initial chemotherapy and relapse more than 60–90 days after the end of chemotherapy are defined as ‘sensitive relapse’ patients, while those whose tumor is stable or progresses during the initial chemotherapy or who have a recurrence within 60–90 days after the end of chemotherapy are considered ‘refractory relapse’ patients (2). A meta-analysis collecting the data from six trials involving intravenous topotecan-based second-line chemotherapy showed that treatment-free interval (TFI) <60 days is the cut-off to consider SCLC patients as refractory to second-line chemotherapy and with poorer overall survival (OS) (3). Overall, recurrent SCLC patients have a very poor prognosis. In this general discouraging context, immunotherapy might be particularly suitable especially for SCLC patients, who are generally characterized by a worst prognosis (2).

Cytotoxic T-lymphocyte antigen-4 (CTLA-4) receptor is a checkpoint molecule controlling the activation and proliferation of T-cells (4). Two anti-CTLA-4 monoclonal antibodies are currently being investigated in SCLC: ipilimumab, a fully human immunoglobulin G, and tremelimumab, a fully human immunoglobulin G2. Another important immune checkpoint pathway interaction is the one between the programmed death-1 (PD-1) receptor, expressed on activated T-cells, and its ligands, the programmed death-1 ligand (PD-L1) and the PD-L2, produced by stromal and tumor cells (4). Among the PD-1 inhibitors, two monoclonal antibodies are under investigation for SCLC: nivolumab, a fully human IgG4, and pembrolizumab, a humanized IgG4. 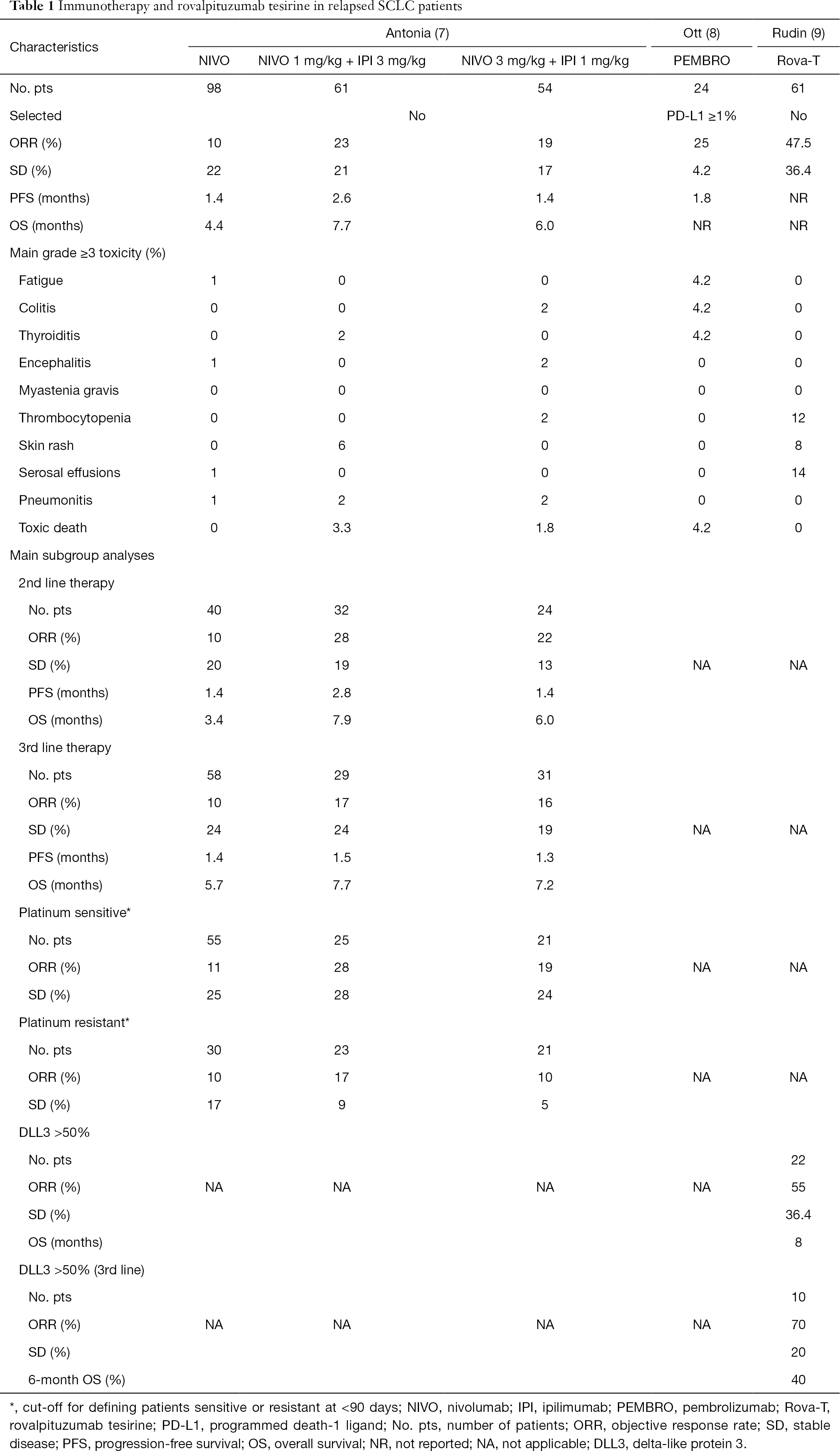 The main limitation of this study was the absence of a randomization to assign treatments. Thus, it was not designed for formal comparisons across cohorts. The KEYNOTE-028 phase Ib study enrolled 24 PD-L1-positive (≥1% at immunohistochemistry using the 22C3 antibody at a central laboratory) SCLC patients to assess the safety, tolerability, and ORR of pembrolizumab given at 10 mg/kg every 2 weeks for a maximum of 24 months. The preliminary results showed a grade 3–5 toxicity reported in 8.3% of patients including one toxic death (colitis). The ORR was 29.2% with a median PFS of 1.8 months (8) (Table 1). These further data seem to underline that probably firstly single-agent immunotherapy should be studied better to define the real role of immunotherapy in SCLC patients, and then go through combinations of immunotherapeutics which, as above reported, are already being investigated. Furthermore, monotherapy should have advantages respect to combination therapy, due to its convenience of administration and cost-effectiveness.

The only two drugs registered for the treatment of second-line therapy of SCLC patients are topotecan, which is the standard-of-care for platinum-sensitive patients worldwide, and amrubicin, which is a valid alternative to topotecan but is registered for administration in this setting only in Japan. Looking at the SCLC outcomes reported by these drugs in the same setting in which immunotherapy was investigated, both as monotherapy or combination, the results are quite better with chemotherapy (2). In fact, immunotherapy seems to work better in terms of OS than PFS as showed also by some pivotal previous randomized trials such as those with nivolumab in advanced non-squamous NSCLC and renal-cell carcinoma (10,11). However, these considerations come from indirect comparisons and should be looked at only as hypotheses to be eventually confirmed in randomized trials.

A new targeted approach is very promising for the treatment of relapsed SCLC patients. Delta-like protein 3 (DLL3), a dipeptide linker, is expressed in about 80% of SCLC. This potential target seems to be higher expressed respect to PD-L1 expression. Rovalpituzumab tesirine is a first-in-class antibody-drug conjugate comprised of a humanized monoclonal antibody against DLL3, and a pyrrolobenzodiazepine dimer toxin. In a phase I study, 74 relapsed SCLC patients received rovalpituzumab tesirine at dose levels ranging from 0.05 to 0.8 mg/kg at either every 3 or 6 weeks. Among the 61 evaluable patients treated at doses of 0.2–0.4 mg/kg, the ORR was 25%. Twenty-two patients had ≥50% of cells expressing DLL3 by immunohistochemistry from archive tissue specimens showing an ORR of 55% with a median OS of 8 months. In the ten patients treated in third-line setting, where no approved therapy currently exists, the ORR was 70%. The most common grade ≥3 adverse events were serosal effusions in 14% of patients, thrombocytopenia in 12%, and skin reactions in 8% of cases (9) (Table 1). If confirmed in further ongoing trials, this result would challenge the role of immunotherapy in SCLC.

Toxic effects were mild and manageable using specifically safety suggested algorithms (12). However, the frequency of immune encephalitis and myasthenia gravis seems to be higher in patients with SCLC compared with other malignant diseases (1). Hypotheses for this finding could be due to the increased trend of paraneoplastic neurological syndromes associated with SCLC and to the potential role of prophylactic cranial irradiation. However, as per other cancers treated with immunotherapy, it is essential to closely monitor SCLC patients for immune-related toxicities and act with prompt implementation of adequate guidelines for their management (12).

Immunotherapy should be a new approach also for the management of SCLC patients. To understand if it might be “practice-changing” in this setting, it is important to plan trials comparing immunotherapy with standard-of-care therapies like those performed in other solid cancers (10,11). New agents, such as rovalpituzumab tesirine, should also be considered for challenging immunotherapy. It is also mandatory to select SCLC patients based on prognostic factors which, in second-line therapy, are the response to first-line chemotherapy and its duration. In this context, immunotherapy might be particularly suitable especially for “refractory relapse” SCLC patients who are characterized by the worst prognosis. To date, answering to the title question, we are just at the early beginning, and all these issues need further investigation in well-designed prospective larger trials.