Type 2 diabetes mellitus (T2DM) has reached epidemic proportion worldwide, as a result of population growth and ageing, urbanization, and increasing prevalence of obesity and physical inactivity (1). Estimates from the International Diabetes Federation (IDF) indicate that the number of adults with diabetes mellitus in the world will expand by 55%, from 381.8 million in 2013 to 591.9 million in 2035 (2). The largest increase of the prevalence of diabetes will occur in sub-Saharan Africa, with a projected growth of 109.6%, from 19.8 million in 2013 to 41.5 million in 2035 (2).

T2DM is associated with an adverse cardiometabolic profile including hypertension, dyslipidemia, and obesity (3). Alongside pharmacologic treatment, lifestyle modifications including diet, weight management and exercise are important features of the management of T2DM. Physical activity (resistance, or aerobic exercise, or both) has been shown to improve the control of glycaemia along with other cardiovascular risk factors such as hypertension and obesity, and is associated with reduced morbidity and mortality in T2DM patients (4). Thus, the American Diabetes Association recommends at least 150 minutes/week (50–70% of the maximal heart rate) of moderate intensity exercise, and at least thrice-a-week sessions of aerobic exercise to reduce glycaemia and the cardiovascular risk (5).

Cameroon is a low-income country situated in Central Africa. In 2013, the IDF estimated the nation prevalence of diabetes among adults aged 20 to 79 years at 4.8% (2). Glycemic control in known diabetes patients is often very poor; a population based survey in the country showed that only one in four known diabetic patients had optimal fasting blood glucose levels (6). Strategies for an efficient management of diabetic patients in Cameroon are urgently needed. We conducted a pilot study to examine whether a 12-week aerobic exercise program could improve anthropometric and metabolic parameters of a group of T2DM women aged ≥50 years followed at the National Obesity Center (NOC) of the Yaoundé Central Hospital. Findings may contribute to designing and implementing routine aerobic exercise program for diabetic patients in the country.

The study was granted approval by the National Ethical Review Board of the Cameroon Ministry of Public Health. Written informed consent was obtained from all the participants. The study was conducted in accordance with the Helsinki Declaration.

We conducted a prospective cohort study during three months from February to May 2009. T2DM women aged ≥50 years old followed at the NOC were invited to participate in the study. We excluded patients with overt diabetic macro and/or microvascular complications, cardiovascular diseases, comorbid conditions such as cancers or auto-immune diseases. Participants were enrolled in a 12-week aerobic exercise program. During this period, thrice-a-week sessions of physical activity lasting a mean time of 45 minutes each were held, under the supervision of trained personnel. Each session was divided into three periods as follows: warm-up, activity (brisk walking and light running), and cool-down. Step counting was done with a NESTLE pedometer. Aided by pulse recording, activity’s intensity was progressively augmented from 55% to 75% of an individual’s maximal heart rate obtained from the Fox-Haskell formula (7). Details on the session are provided in Appendix. Participants’ diet was closely monitored by a dietician at the NOC. The program was held at the National Institute for Youth and Sport (NIYS). This academic institution which is located in Yaoundé at few kilometers from the NOC, is in charge of the academic training of sports and youth affairs professionals in Cameroon. Anthropomorphic and metabolic parameters during the study were recorded at the NIYS, while the glucose tolerance test was carried out at the NOC.

Anthropometric and metabolic parameters were measured at baseline, after six weeks of exercise, and at the end of the training program (at 12 weeks), whereas cardiorespiratory and biochemical measurements were carried out only at baseline and after the training program. We measured height and waist circumference to the nearest 0.5 cm, and weight in light clothes to the nearest 0.1 kg, and we then calculated the body mass index (BMI) as weight in kg/height2 in m2. Metabolic parameters including fat mass, lean mass and visceral fat were also measured to the nearest 0.1%, using the TANITA BC-420 MA impedancemeter. 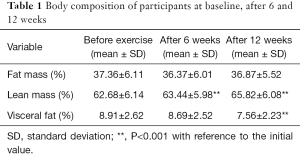 Table 1 Body composition of participants at baseline, after 6 and 12 weeks
Full table 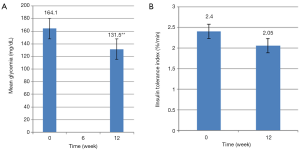 Figure 2 Variations of glycemia and insulin sensitivity before, and after exercise. **, P<0.001.

Figure 3 Aerobic capacity of participants before, and after exercise. *, P<0.05.

This study was designed to assess the impact of an aerobic exercise training program monitored by a step counter, on anthropometric and metabolic parameters of T2DM Cameroonian women aged ≥50 years. After a 12-week period of exercise, most of the anthropometric and metabolic characteristics of participants were significantly improved, as well as their aerobic capacity.

Previous prospective studies have reported a significant reduction of overall and visceral adiposity markers (weight, waist circumference, visceral fat, and fat mass) after an aerobic training program (10,11) as we observed in this study. Several biological mechanisms could explain this reduced adiposity. For example, excess glucose need in the muscular tissue which is the main “actor” during exercise augments metabolic activities and nutrient exchange (12). Lipid molecules may therefore be converted to glucose during this period through enzymatic pathways. Furthermore, the white adipose tissue which is concerned with an adverse cardiometabolic activity, makes up to 20–25% of the total body weight (13). Total body weight loss is thus certainly accompanied with a reduced white adipose tissue mass. However, this seems to be minor in reducing adiposity during physical activity (11). By restoring muscular fibers through a good blood flow, the aerobic exercise could have induced the increase of the lean mass observed in this study (14).

Our participants also showed an increased aerobic capacity after the training period. This is consistent with the results of a meta-analysis of randomized controlled trials assessing the impact of step counting on T2DM patients’ aerobic capacity (16). The pedometer could have accounted for this. It has been shown to increase T2DM patients’ physical capacity, especially when there is a self-set physical activity goal (16). Physical capacity is expressed by the maximum oxygen uptake which carries its highest value during exercise, in other to meet the muscle needs (12,17). Increase in aerobic capacity could also have driven previous observations (16). In fact, increase in VO2 Max is closely related to increase in metabolic activities of the cells (12), and therefore to reduced blood levels of nutrients such as glucose and lipids. It is also associated with improvement of the cardiac autonomic function in T2DM patients (18). Furthermore, an increased aerobic capacity is the reflect of a potential good productive capacity at work (17). However, diabetics usually have a reduced exercise capacity which worsens their disease (19). A good training program is thus useful to overcome this situation, as well as to prevent diabetes in healthy populations (20).

There are some limitations that should be taken into consideration when interpreting these data. The small cohort size could be explained by the fact that it was a preliminary study. We cannot separate the effect of exercise per se from that driven by increased aerobic capacity on anthropometric and metabolic parameters in this study. But it was not designed for that purpose.

This preliminary study showed that the 12-week aerobic exercise could positively impact on anthropometric and metabolic parameters of T2DM Cameroonian women aged ≥50 years, even on their aerobic capacity. Our findings call for further studies to better assess the possible benefit of an aerobic exercise program among various diabetic populations in Cameroon, and explore ways for implementation in routine management of patients in the country.

We wish to thank the personnel of the National Institute of Youth and Sport and of the National Obesity Centre for their invaluable help during data collection, as well as patients who participated in the study.

Ethical Statement: The study was granted approval by the National Ethical Review Board of the Cameroon Ministry of Public Health. Written informed consent was obtained from all the participants. The study was conducted in accordance with the Helsinki Declaration.

N.B.: dance was integrated in the activity period of every session as from the fifth week.