Survival analysis in the presence of competing risks

Competing risks arise in clinical research when there are more than one possible outcome during follow up for survival data, and the occurrence of an outcome of interest can be precluded by another. The latter is called the competing risk (1-4). In clinical oncology for example, cancer-related mortality may be of primary interest, but other causes of death can prevent its occurrence and deaths caused by reasons other than cancer are typical examples of competing risks. In critical care researches, investigators may examine different strategies to maintain central venous patency in intensive care unit (ICU) (5,6). Patients in different groups were followed up for the occurrence of lumen non-patency. However, patients may die before the occurrence of lumen non-patency. Death can be considered as censoring and Cox proportional hazard model may be applied to estimate the effect of covariate on hazard. However, the effect on hazard cannot be directly liked to cumulative incidence function (CIF), thus other modeling methods are required. This article will describe different approaches for survival analysis in the presence of competing risks. The basic ideas of each method will be introduced and detailed R code be provided in the main text. I also highlight the interpretation of statistical output produced by R code.

Key concepts in survival analysis with and without competing risks

Survival data can be characterized by hazard function [h(t)] which provides a dynamic description of the instantaneous risk of failing given survival until time t. Cumulative hazard function [H(t)] is the h(t) added over time from 0 to t. In contrast to h(t), H(t) has no simple probabilistic interpretation. However, a plot of

against t can provide useful information in that its local slope approximates the h(t) (7). Survival function [

] can be estimated non-parametrically using Kaplan-Meier estimator, and the

can be estimated using Nelson-Aalen estimator. In the absence of competing risks, there is a one-to-one correspondence between S(t) and H(t):

and the CIF is one minus the survival function:

The effect of covariates on hazard rate can be estimated using COX proportional hazard regression model. The exponentiation of the coefficient gives the hazard ratio (HR) which is the ratio of rate in epidemiology. Because hazard function has a one-to-one correspondence to the cumulative incidence, the HR also reflects the risk (cumulative incidence) of the study population. However, this relationship does not exist in the presence of competing risks. Although the cause-specific hazard regression model represents the impact of covariates on the cause-specific hazard, it does not necessarily reflect the impact on the cumulative incidence. Because clinicians or investigators may be interested in both rate and risk, the impact of covariates on both quantities can be reported side-by-side in an article (2). The Fine-Gray model was developed to link covariates to cumulative incidence. The statistics derived from Fine-Gray model are subdistribution hazard ratio (SHR) which is actually not equivalent to the HR in conventional framework (9). I will illustrate it in the following examples.

The worked example is contained in the riskRegression package. A total of 205 patients with melanoma had undergone surgical operation and were followed up until the end of 1977. The dataset can be loaded and viewed in the following way. 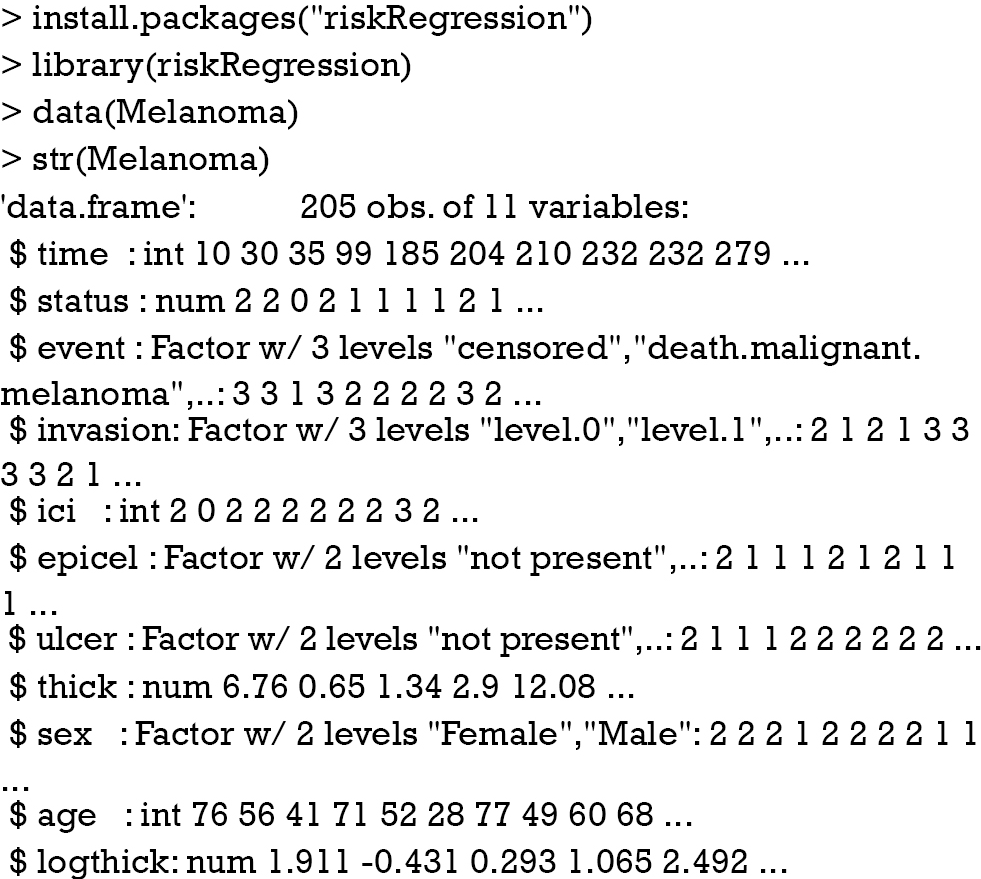 There are 11 variables. The time (time) was measured in days from operation. Status assumes numeric values with 0= censored; 1= died from melanoma and 2= died from other causes. Event is in accordance with status but is converted to a factor variable with three levels. Other variables are risk factors under investigation including invasion, inflammatory cell infiltration (ici), ulcer, thick, sex, age and tumor thickness on log scale (logthick).

The arguments specifying an CIF in cuminc() is similar to that in crr() function. The first argument is a failure time variable, and the second one takes a variable with distinct code for different causes of failure. The group argument takes a variable specifying distinct groups. In the example, patients were divided into groups by sex. The estimated CIFs can be visualized with generic function plot(). Figure 1 shows that male patients have higher risk of death from melanoma and other causes than the female. The difference appears larger for failure from melanoma versus failure from other causes. To perform formal statistical test for the difference between groups, modified χ2 statistic can be used (10). 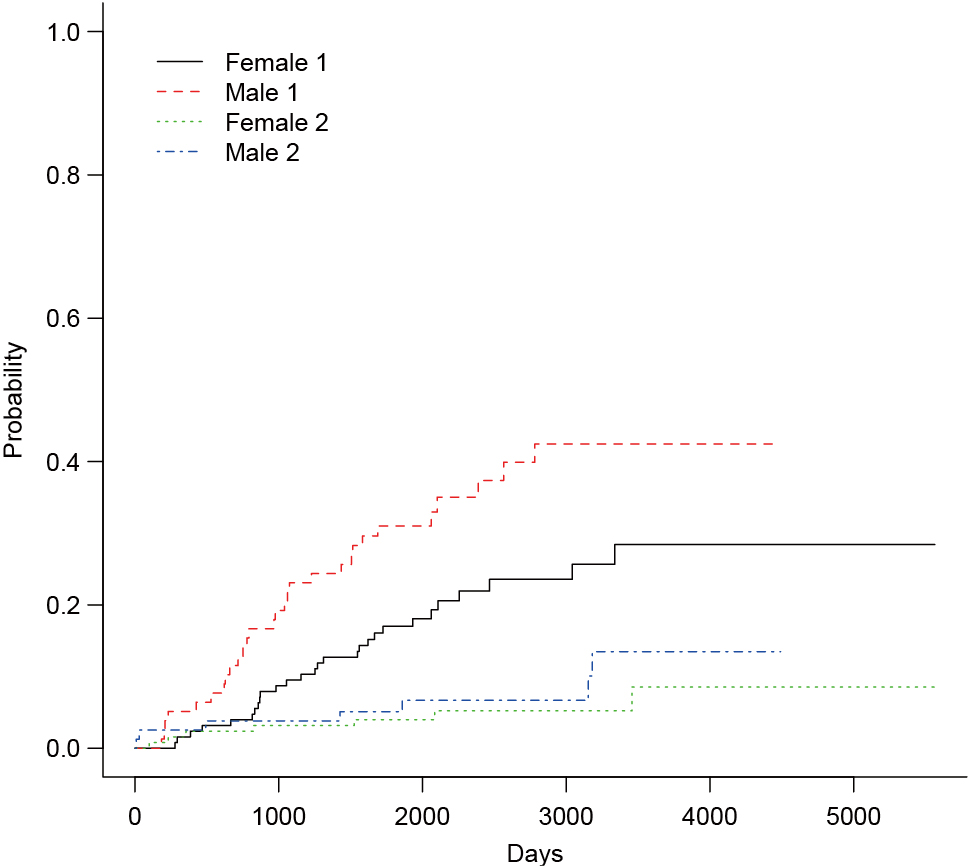 Figure 1 Non-parametric estimates of cumulative incidence functions for deaths from melanoma (status==1) and other causes (status==2). Each outcome is compared between male and female patients.

The first column of the output shows χ2 statistic for between-group test, and the second column shows the respective P values. Male patients are more likely to die from melanoma than the female (P=0.016), but there is no significant difference in mortality risk from other causes for male versus female patients (P=0.36). 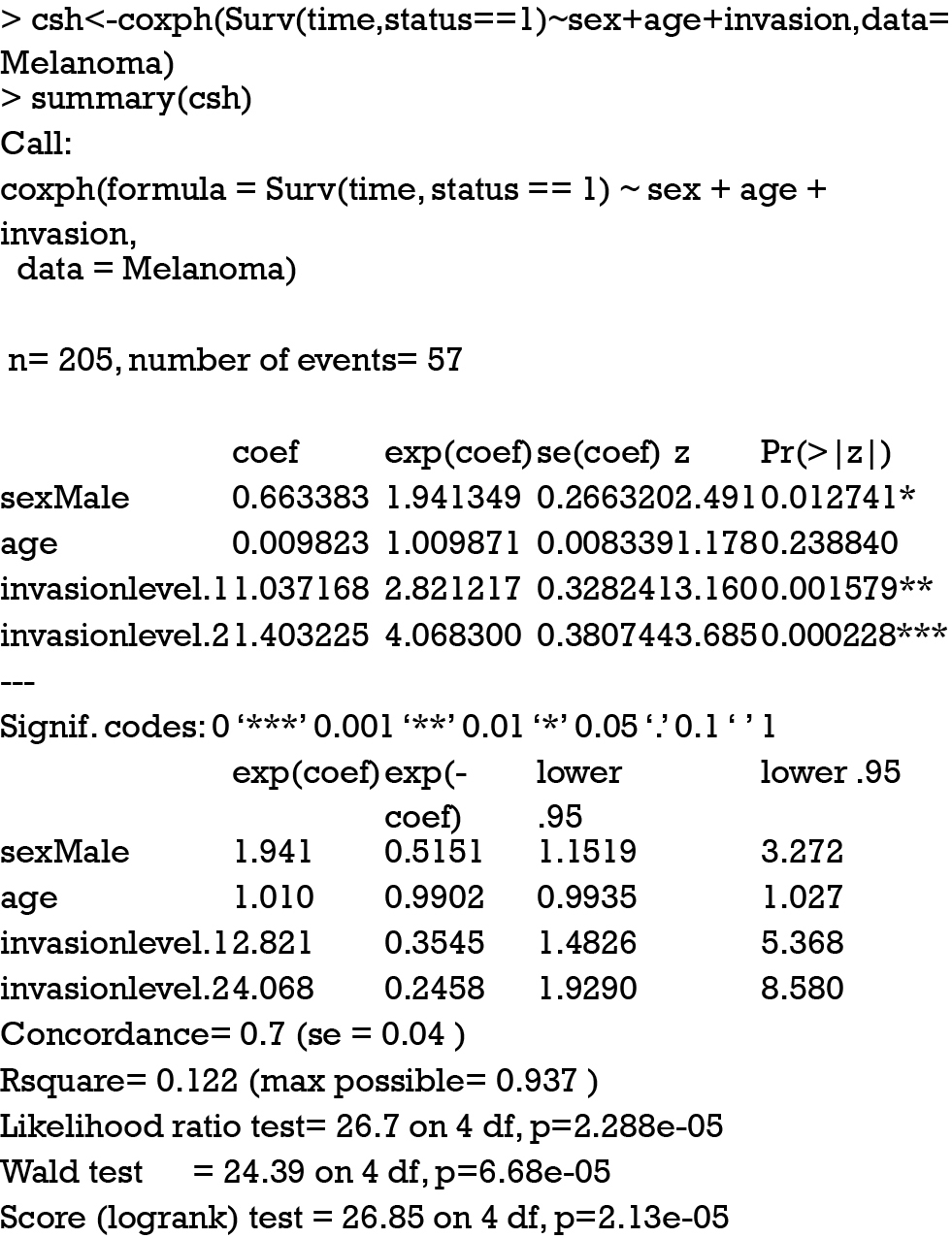 The first argument of the coxph() function takes an object of class Surv, where the “status==1” indicates that only status value of 1 is considered as event and other values are considered as censored. The summary output shows the coefficients and corresponding HR. The last five lines display statistics for the fitness of the model. Detailed interpretation of these statistics can be found in my previous tutorial paper.

Alternatively, the task can be performed using CSC() function contained in the riskRegression package.

The summary output is quite similar to that produced by coxph() function except that CSC() function automatically produces cause-specific hazard models for both types of events (cause 1 and 2). With the fitted regression model, one can predict individual risk with given covariates. For example, I want to predict the risk of a male patient aged 50 years old and has invasion level 2.

The Fine-Gray model can be fit using FGR() function shipped with riskRegression package. This function calls another function crr() from the cmprsk package.

The Fine-Gray model can be fit with the crr() function in the cmprsk package. The function arguments are different from that in FGR() function. Although the use of model formula is not supported, the model.matrix function can be used to generate suitable matrices of covariates from factors.

The fitted Fine-Gray model can be used to predict new observations with given combinations of covariates. In the following example, a new dataset containing three patients are given. Covariates of age, sex and invasion levels are defined for them.

The above output is exactly what we want. Variable sex was coded 1 for male and 0 for female. Invasion was transformed to two 0/1 variables. Age is a continuous variable and remains unchanged.

An object of crr class is passed to the predict() function, followed by a matrix containing covariate combinations. The predict() function returns a matrix (not shown) with the unique cause =1 failure times in the first column, and the other columns giving the estimated subdistribution function corresponding to the covariate combinations at each failure time. The generic function plot() can be applied to draw CIF for each observation (Figure 2). 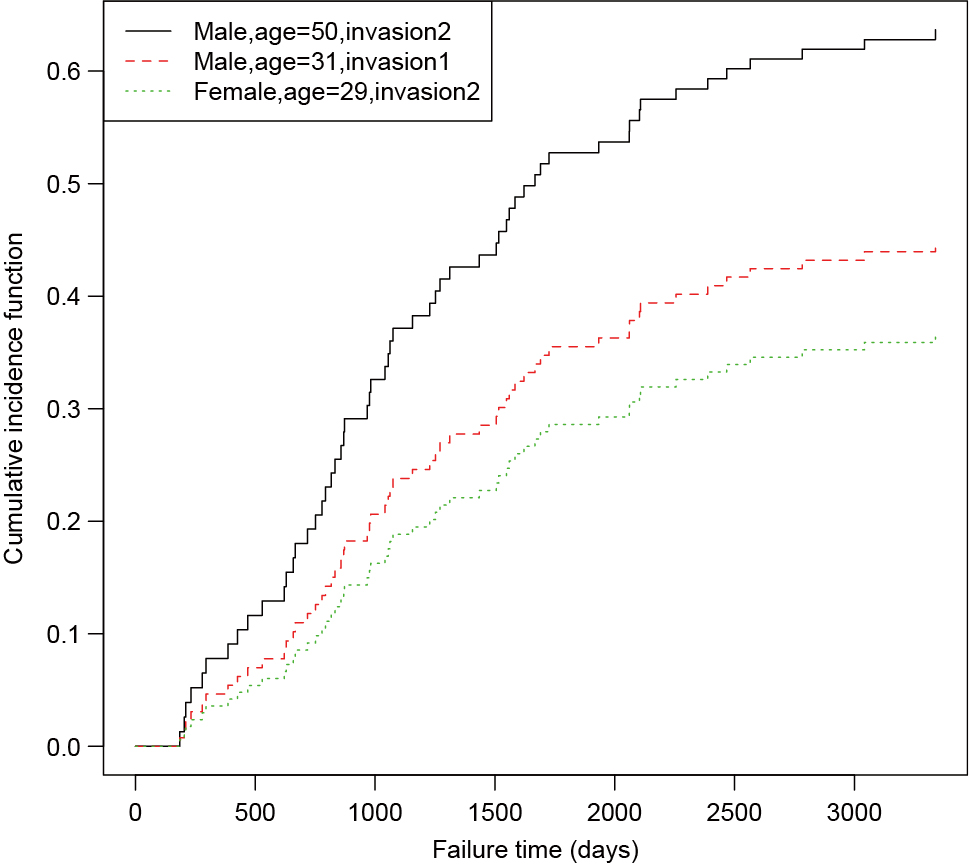 The prediction and plotting are more convenient using functions in riskRegression package. The function riskRegression() provides a variety of link functions for survival regression model in the presence of competing risks (12).

An important assumption of Cox regression model is the proportionality, which assumes the subdistribution with covariates z is a constant shift on the complementary log-log scale from a baseline subdistribution function. The curves will not cross with each other. Model checking may initially be performed by graphical examination of CIFs.

Figure 3 shows the CIFs at different invasion levels, setting age to 52 years and sex to male. There is no evidence of violation to the proportionality assumption for the variable invasion. Another method to check for proportional assumption is to include time dependent covariate in the regression model. 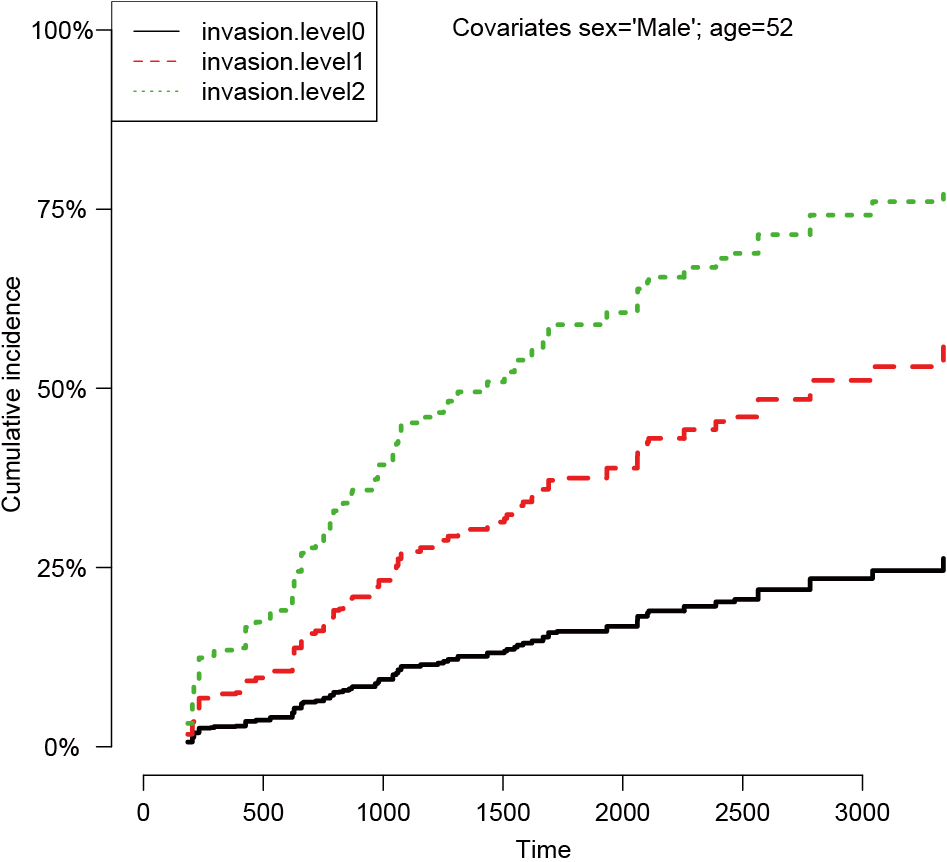 Figure 3 Cumulative incidence functions at different invasion levels, setting age to 52 years and sex to male. There is no evidence of violation to the proportionality assumption for the variable invasion. 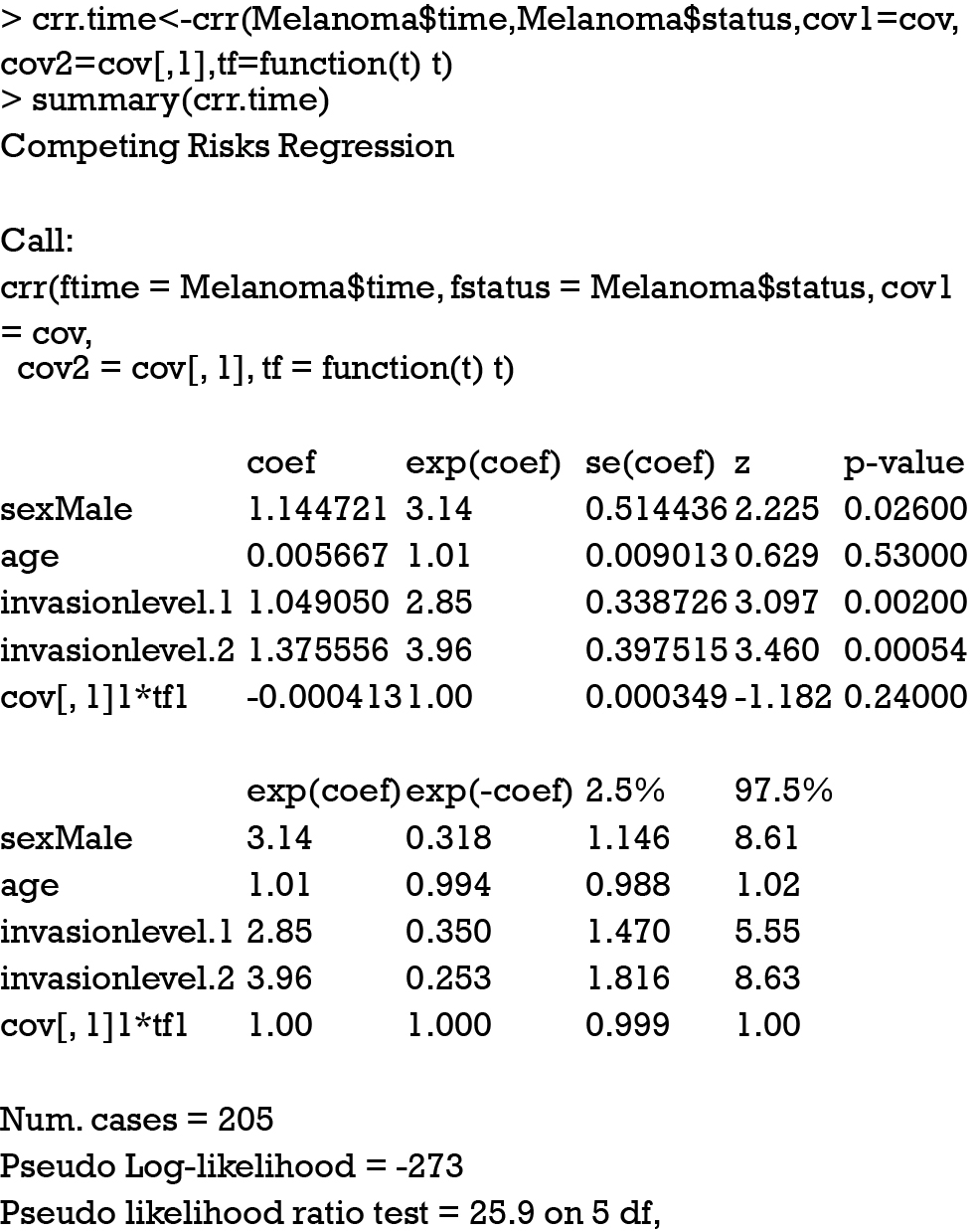 The argument cov2 takes a matrix of covariates that will be multiplied by time. The functions of time are specified in the tf argument. The function takes a vector of times as an argument and returns a matrix. The jth column of the time matrix will be multiplied by the jth column of cov2. For example, a model of the form can be specified in crr() function by (cov1 = x1, cov2=cbind(x1,x1), tf=function(t) cbind(t,t^2)). In the summary output of the Fine-Gray model with time-varying covariate, the last term shows no statistical significance (P=0.24), indicating the effect of sex is time-constant. The riskRegression provides a simple resolution to model time-varying covariate.

Figure 4 shows the time-dependent effects in Fine-Gray regression model for mortality. The curve and corresponding 95% confidence interval are drawn with non-parametric method. It appears that coefficients for level 2 vs. 1 are larger during time period from 0 to 1,000 than that in other times, indicating some slight time interactions (12). However, formal statistical test is not allowed in this setting. 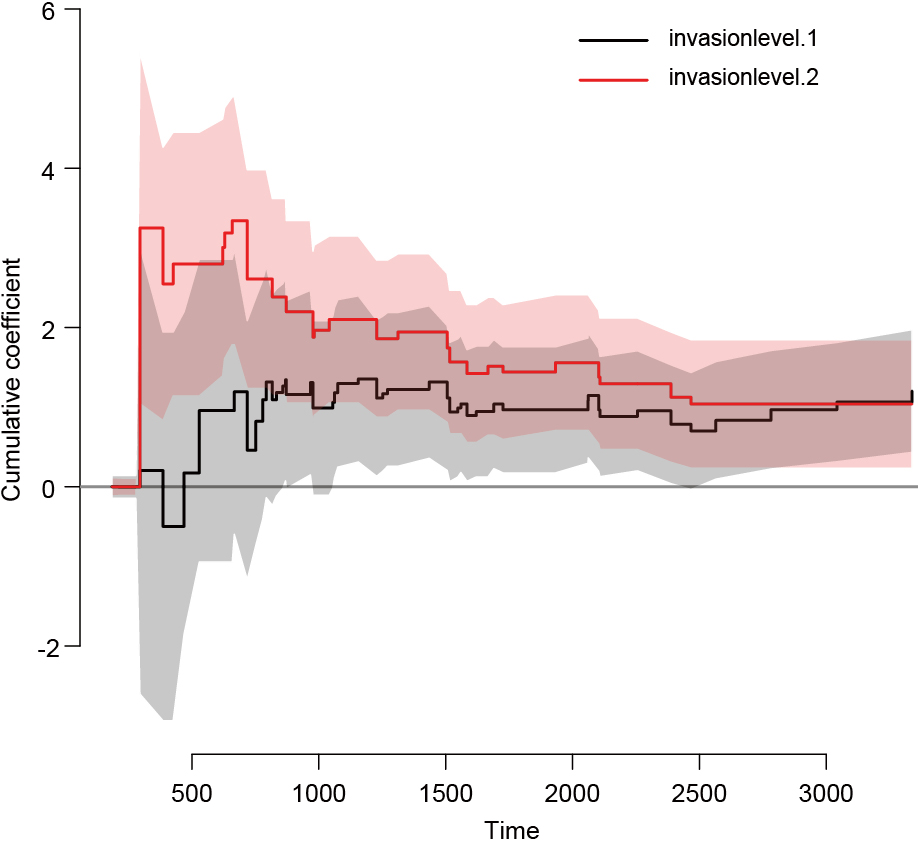 Figure 4 Time-dependent effects in the Fine-Gray regression model for invasion. The nonparametric estimates are shown with 95% pointwise confidence intervals.

I plot the Schoenfeld residuals against failure time for each covariate. If the proportional assumption is true, the residual should have a constant mean across time. A scatterplot smoother is added for each covariate to check for the assumption (Figure 5). It appears that the invasion level 1 has non-constant residuals across time, indicating a potential violation to the proportional assumption. To formally check the assumption for invasion level 1, we can add an interaction term with time. 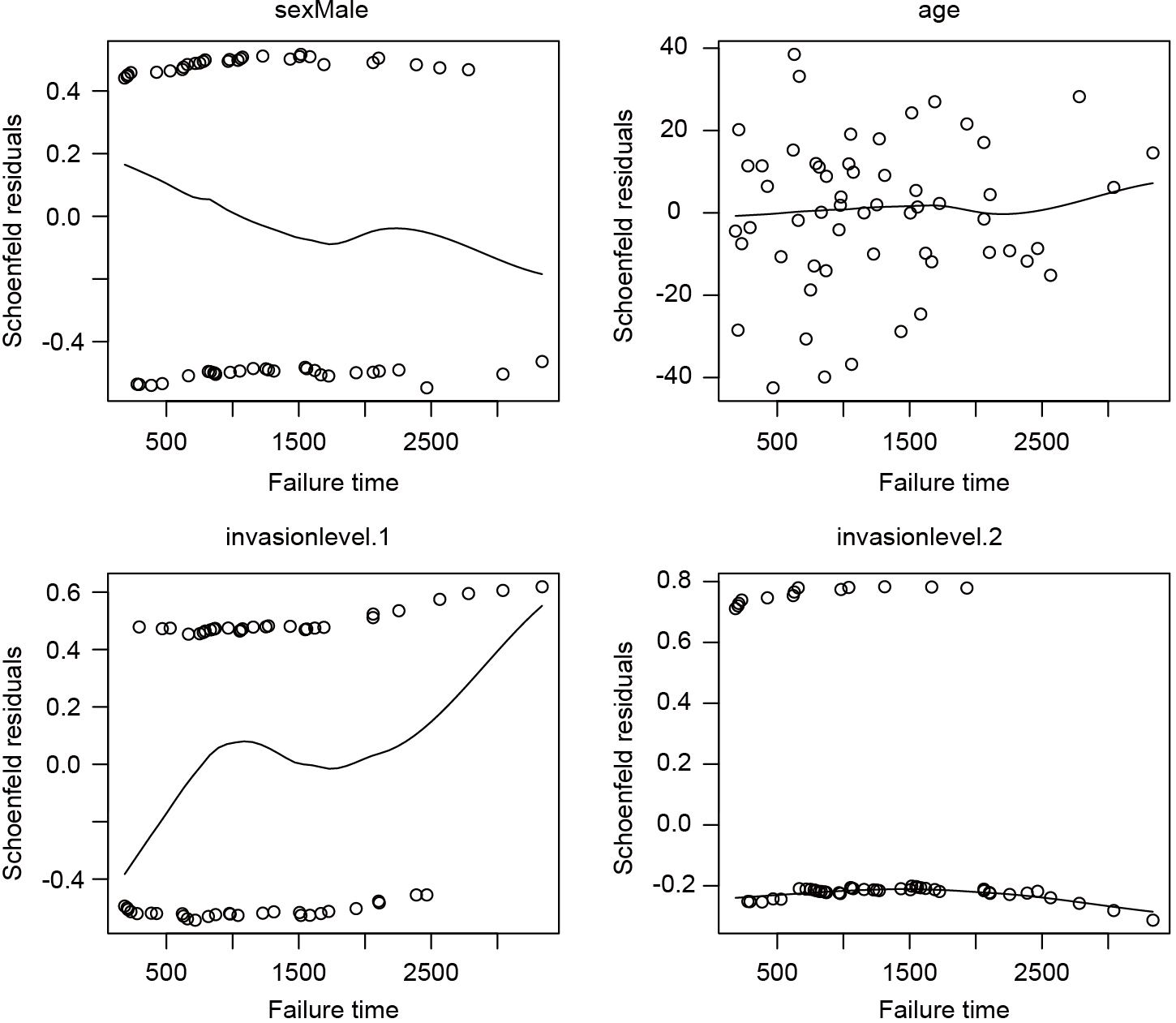 Figure 5 Schoenfeld residuals against failure time for each covariate. It is noted that the residuals follows a non-constant distribution across failure times, indicating a potential violation to the proportional assumption.