Persistent dysregulation of genes in the development of endometriosis

Endometriosis is a chronic and often undiagnosed disease affecting 5–10% of women of child-bearing age. It is characterized by the growth of extrauterine endometrial tissue, most commonly in the abdominal cavity (1), and can manifest as pelvic pain, heterotopia, dysuria, dysmenorrhea, and infertility (2). Unfortunately, for endometriosis and other diseases with similar symptoms, the overall sensitivity and specificity of transvaginal ultrasonography (TVUS) ranges from 53% to 93% (3). At present, there is no reliable marker to treat this disease (4).

The pathophysiology of endometriosis is complex and not fully understood (5). Study showed that endometriosis results from a combination of anatomical, hormonal, immune, response, oestrogen, genetic, epigenetic and environmental factors in affected women (6). There is increasing evidence that hormones and immune factors may create a microenvironment conducive to inflammation, thereby promoting the persistence of endometriosis (7). The molecular studies have been supported by clinical observations of disease resolution, symptom relief, and so-called “treatment” of endometriosis response to anti-inflammatory drugs (8). However, due to the lack of reliable diagnostic tools and nonspecific symptoms, diagnosis of endometriosis can be delayed by up to 8–10 years. This results in a heavy economic burden as the chronic and debilitating pain caused by endometriosis may hinder work efficiency, while infertility can lead to serious psychological and economic pressures on the affected women and their partners (9).

The American Society of Reproductive Medicine (ASRM) guidelines classify endometriosis into 4 stages using a scoring system, namely stage I, II, III, and IV, which correspond to minimal, mild, moderate, and severe endometriosis, respectively (10). While the mechanisms of malignant transformation of endometriosis have not been fully elucidated, oxidative stress, inflammation, and changes in the hormone environment are all plausible pathogenic factors (11). Hormone levels, especially estrogen, plays an important regulatory role in the deterioration of endometriosis (12). In addition, some high throughput studies have found a role for certain candidate genes in the pathogenesis of endometriosis (13-15). Currently, there is no cure for endometriosis and existing drugs can only help to reduce the symptoms of the disease, with a recurrence rate of 35–50%. Therefore, it is necessary to develop diagnostic indicators and potential treatments for the management of patients with endometriosis (16).

An increasingly accepted view is that diseases can be considered a disturbance to a genetic network (17). The protein-protein interaction (PPI) with known disease genes have been used to identify new disease genes (18). This current study screened and identified potential biomarkers for endometriosis with different severity and further examined the molecular mechanisms of endometriosis. The following article is presented in accordance with the STREGA reporting checklist (available at https://atm.amegroups.com/article/view/10.21037/atm-22-4806/rc).

The GSE51981 dataset for endometriosis was obtained from the Gene Expression Omnibus (GEO) database and analyzed. The dataset included 34 control samples, 28 samples from patients with mid endometriosis, and 49 samples from patients with severe disease. The study was conducted in accordance with the Declaration of Helsinki (as revised in 2013). The original data from GSE51981 was standardized with the RMA function of the Affy R package to construct the gene expression profile. The differential expression between the mild and control cases, as well as the severe and mild cases, were constructed using the limma R package. The filter threshold was set to a P value <0.05. The Short Time Series Expression Miner (STEM) (v1.3.11) software was used to cluster the differentially expressed genes (DEGs) to screen out the genes with persistent expression disorder (19). Then, DEGs between early-secretory and proliferation, or between mid-secretory and early-secretory were identified using limma R package.

The PPI network was constructed by mapping the genes with continuous expression disorder into the String database (20). The network was visualized using the Cytoscape (3.6.1) software. The important modules in the PPI network were determined using the Molecular Complex Detection (MCODE) plug-in (21), where K-score =5 was used as the standard of MCODE analysis. The R-package circlize was used to show the differences in the genes from each module. Finally, the top 5 genes were selected as the core genes using the Betweenness algorithm of the CytoHubba plug-in.

Furthermore, DCA curve (22) was used to evaluate the diagnostic roles for core genes in GSE51981.

The Gene Ontology (GO) and Kyoto Encyclopedia of Gene and Genome (KEGG) pathways were identified using the clusterProfiler R package (23). The significance level of enrichment of GO and KEGG pathways was set at P<0.05. In addition, the Gene Set Variation Analysis (GSVA) R software package was used to determine the most relevant pathway of persistent maladjustment genes (24).

The data of transcriptional target regulation relationship was obtained from the RAID v2.0 database (25). Under the background of transcription factor pairing data, the P value was set to <0.01. The regulatory gene network was then displayed using the Cytoscape software.

The DGIdb (https://www.dgidb.org/) database was used to predict the relationship between core genes and drugs.

Single-sample Gene Set Enrichment Analysis (ssGSEA) was used to calculate the levels of 24 immune cell types between the mild and control cases, or between the severe and mild in GSE51981. Correlation analysis to further show the core genes correlated with immune cells.

Using bioinforcloud platform (http://www.bioinforcloud.org.cn) to analyze the all methods in this study. The P value <0.05 was considered statistical significance. 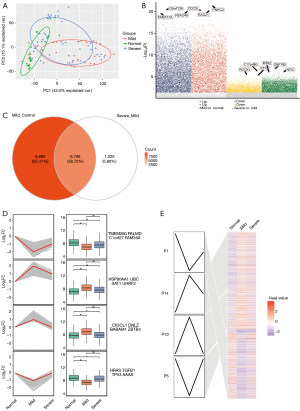 To identify the key factors associated with the continued deterioration of endometriosis, 3,472 genes were mapped into the PPI network (Figure 2A). A total of 466 genes and 11,211 interacting pairs were obtained, and 12 modules were identified (Figure 2B,2C). Correlation analysis showed that modules 6, 7, and 9 were significantly correlated with normal and disease state, and module genes may be related to the occurrence and development of disease (Figure 2D). 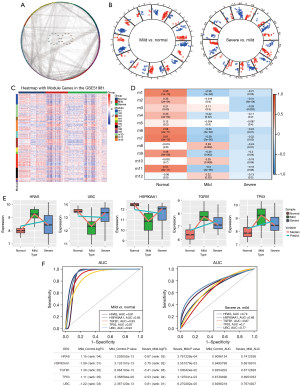 The top 5 genes were considered core genes, including HRAS, HSP90AA1, TGFB1, TP53, and UBC. Among them, HRAS, TGFB1, and TP53 were upregulated in the process of endometriosis deterioration, while HSP90AA1 and UBC were downregulated (Figure 2E). Their expression trend was consistent with the continuous up-down relationship between the STEM box chart and the heat chart. In addition, using receiver operating characteristic (ROC) curve analyses, the area under the curve (AUC) values for mild and severe endometriosis cases revealed that these genes had good clinical diagnostic ability (Figure 2F). Using the DCA analysis to assess the diagnostic performance, we found the higher net benefit in the mild endometriosis (Figure 3A) and severe endometriosis (Figure 3B), thus with better diagnostic role for endometriosis. 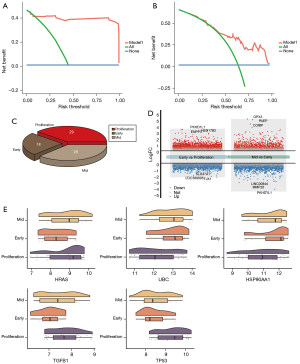 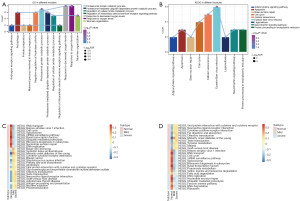 Through GSVA, we calculated the top changes of KEGG pathways in normal, mild, and severe endometriosis (Figure 4C,4D). In the upregulated pathway, the changes of olfactory transduction, taste transduction, autoimmune thyroid disease, and nicotine addiction were more obvious. Furthermore, the changes in Fanconi anemia pathway, and ribosome and DNA replication were more obvious (Figure 4). 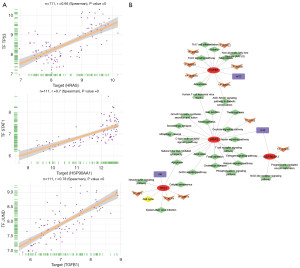 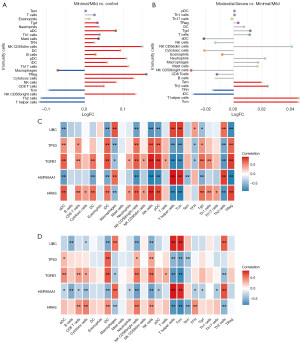 The implantation and growth of endometrial cells is the main cause of endometriosis. Endometriosis exerts a significant social and psychological burden on women in many respects, including quality of life, intimacy, childbearing, education and work, and emotional health (26). Furthermore, endometriosis is often related to cardiovascular and autoimmune diseases (27). Recent advances in the field of endometriosis have identified novel biomarkers that may be developed as targets for the treatment of endometriosis, including immunomodulators and inhibitors, which have been tested on animal models (28). This current study identified and examined the molecular targets and mechanisms involved in the progression of endometriosis. This data will contribute to the diagnosis, treatment, and management of patients with endometriosis.

However, this study also has limitations. First, the data used in this study were obtained from public databases, and more clinical information on patients may be missing. Second, for the significant analytical results we obtained, further in vivo and in vitro experimental validation is warranted. In addition, we should expand the sample size in future studies to enhance the clinical applicability of the results. The method of screening modules and core genes through the PPI network was universal and may lack individualization. Further research using a large number of clinical samples are needed to verify our results.

Endometriosis is a debilitating disease that affects the quality of life of adults and adolescents. Delays in diagnosis are common and can lead to a decline in reproductive potential and fertility. Recognizing disease progression and deterioration may help to improve therapeutic treatments and outcomes. These potential biomarkers may reduce the cost of surgical intervention through early diagnosis of cases, so as to improve the clinical management of the disease.

Funding: This work was supported by the Liuzhou City Science and Technology Research Projects (Nos. 2021YB0104A003 and 2021YB0104B020) and the Scientific Research Fund of the Health and Family Planning Commission of Guangxi Zhuang Autonomous Region (Nos. Z2016795 and Z20211443).

Reporting Checklist: The authors have completed the STREGA reporting checklist. Available at https://atm.amegroups.com/article/view/10.21037/atm-22-4806/rc

Conflicts of Interest: All authors have completed the ICMJE uniform disclosure form (available at https://atm.amegroups.com/article/view/10.21037/atm-22-4806/coif). The authors have no conflicts of interest to declare.

Ethical Statement: The authors are accountable for all aspects of the work, including ensuring that any questions related to the accuracy or integrity of any part of the work have been appropriately investigated and resolved. The study was conducted in accordance with the Declaration of Helsinki (as revised in 2013).