Obesity, which is defined as excessive body fat, has become a personal and public health problem worldwide (1). With approximately 46% of adults and 15% of children obese or overweight, China is the country most affected by obesity worldwide (2). Additionally, obesity has been reported to be closely related to the occurrence of numerous illnesses, including cardiovascular diseases and hypertension (3,4). Environmental factors, such as an unhealthy diet, insufficient physical exercise, fast food, ultra-processed foods, chemical contaminants, and the inflammatory response, are the main causes of obesity (5,6). Interventions directed at environmental factors and inflammation have been shown to effectively address obesity; however, the efficacy of such interventions has been limited (7,8). Thus, other intervention methods need to be developed to treat obesity.

Cathepsin S (CTSS), which is a critical member of the cysteine proteinase family, is a strong mammalian elastase and can degrade a variety of extracellular components, including elastin, fibronectin, laminin, and collagen (9,10). An increasing number of studies have shown that CTSS is closely associated with the advancement of many diseases; for example, in atherosclerosis, the messenger ribonucleic acid (mRNA) expression of CTSS was found to be greatly elevated in infract areas (11). Chang and coworkers have evidenced that CTSS promoted the development of pulmonary arterial hypertension (12). Further, CTSS has been shown to be abundant in many tumor cells and to participate in the progression of cancers (13). Notably, previous studies have reported that CTSS, which is elevated in obese individuals, contributed to the expansion of fat mass in obesity due to its facilitative effects on adipogenesis (14,15). Interestingly, Ahmad et al. have evidenced that CTSS inhibitor might be a potential therapeutic target for obese patients (16).

To induce obesity in vivo, the mice in this study were fed a high-fat diet (HFD). This study was designed to examine the functions of CTSS in adipogenesis, inflammatory infiltration, and hepatic lipid accumulation in obese mice. Our findings may lay a foundation for further research on obesity in the future. We present the following article in accordance with the ARRIVE reporting checklist (available at https://atm.amegroups.com/article/view/10.21037/atm-22-5145/rc).

After 12 weeks of feeding, the mice were euthanized, and fat depots from epididymal white adipose tissue (eWAT), plasma samples, and liver tissues were rapidly removed, immediately frozen in liquid nitrogen, and stored at −80 ℃ awaiting the follow-up experiments. No signs of peritonitis, pain, or discomfort were observed after the mice had been euthanized. A protocol was prepared before the study without registration. Animal experiments were performed under a project license (No. 2200596) granted by the ethics board of Guizhou Medical University in compliance with Guizhou Medical University guidelines for the care and use of animals.

For the purpose of detecting hepatic TG, the homogenization of liver tissue with 300 µg/mL PBS (pH 7.4) and stainless-steel beads (Qiagen, Hilden, Germany) was implemented at 30 frequency/s for 1 min by virtue of a homogenizer (TissueLyser II; Qiagen) in light of standard protocol. After the centrifugation of homogenates, TG quantification kit (Cell Biolabs, San Diego, CA, USA) was applied for the assessment of hepatic TG in the supernatant.

Following the feeding for 12 weeks, the mice were subjected to a GTT and an ITT following an overnight fast. After collecting the baseline blood, the intraperitoneal injection of mice with glucose (0.9 g/kg body weight) and insulin (0.75 units/kg body weight) was carried out. In the tail vein blood samples, the appraisement of blood glucose levels was implemented 15, 30, 60, 90 and 120 min after the injection by means of a blood glucometer (One Touch, Milpitas, CA, USA).

The collected eWAT was subjected to 4% paraformaldehyde fixation. Following the dehydration and embedment in paraffin, the cutting of sample sections was operated by means of a Leica RM22559 microtome (Leica, Shanghai, China), stained with standard hematoxylin and eosin (H&E) staining in light of standard protocol and got analyzed via immunohistochemical staining of F4/80 (Bio-Rad, Hercules, CA, USA) as described previously (19,20).

Following the collection of the liver tissue, oil red O staining was applied to observe lipid accumulation. The tissue was pre-rinsed with phosphate buffered solution (PBS) and then fixed with 4% paraformaldehyde for 30 min. The tissue was then rinsed with PBS again, after which the tissue was stained with 1% filtered red oil O solution for 30 min. The positive oil red O areas (the stained areas) were observed using an inverted microscope, and the total lipid content was determined.

All the collected data that presented in the form of the mean ± standard deviation (SD) got analyzed with the help of GraphPad Prism 8.0 software (GraphPad software, Inc., CA, USA). The Student’s t-test was adopted to compare differences between 2 groups, and a 1-way analysis of variance (ANOVA) with Tukey’s post-hoc test was used to compare differences among multiple groups. A P value <0.05 was considered statistically significant.

CTSS expression was increased in the plasma, visceral adipose, and liver tissue of the obese mice 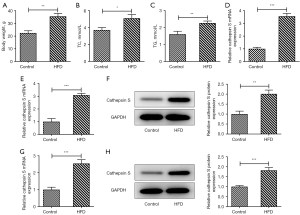 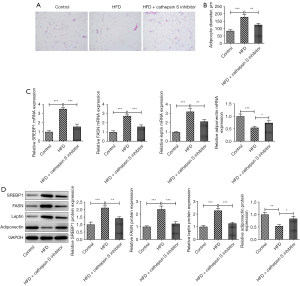 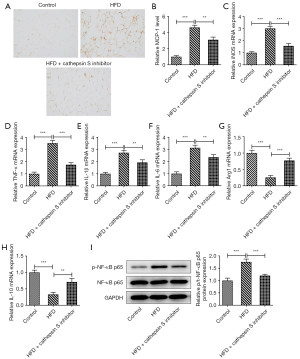 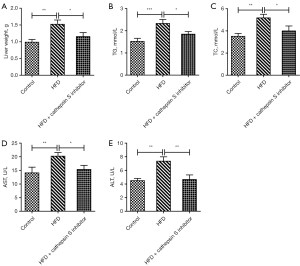 Figure 5 The CTSS inhibitor improved the hepatic function parameters in the obese mice. (A) The liver weight of the mice. (B) The level of TG. (C) The level of TC. (D) The expression of AST in the plasma. (E) The expression of ALT in the plasma. *, P<0.05; **, P<0.01; ***, P<0.001. HFD, high-fat diet; TG, total triglycerides; TC, total cholesterol; AST, aspartate aminotransferase; ALT, alanine aminotransferase; CTSS, cathepsin S.

The oil red O staining results showed that a larger number of red lipid particles were observed in the HFD group compared to the Control group, which were then diminished by the CTSS inhibitor. Thus, the CTSS inhibitor had a suppressive effect on the lipid accumulation of the obese mice (Figure 6A). Additionally, a HFD significantly increased the expression of SREBP1, FASN, and leptin but decreased the expression of adiponectin in the mice in the HFD group compared to the Control group, but these effects were then reversed by the administration of the CTSS inhibitor (Figure 6B,6C). To sum up, the CTSS inhibitor helped to improve hepatic lipid accumulation in the obese mice. 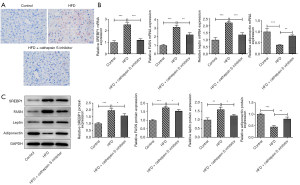 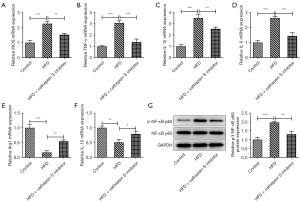 Obesity, which has become more prevalent in recent years, has a close association with metabolic disturbances, including insulin resistance and inflammation (22,23). CTSS, which is a member of the cysteine cathepsin proteases family, is involved in a variety of cellular processes (24,25). Further, numerous studies have shown that CTSS is involved in many diseases; for example, CTSS expression was shown to be greatly elevated in hydronephrotic kidneys (26). Similarly, Kawato et al. found that CTSS expression was abundant in the plasma of patients or mice suffering from systemic lupus erythematosus (27). Evidently, CTSS is abnormally expressed in many diseases, including obesity. A previous study showed that CTSS expression is elevated in obese mice (28).

In the present study, a mice model of obesity was established by feeding the mice a HFD. After 12 weeks of feeding, the weight of the mice fed a HFD mice had significantly increased. Additionally, CTSS expression was discovered to be significantly increased in the plasma, visceral adipose, and liver tissue of the HFD-induced mice, which supports the results of Rauner et al. (28). After the administration of RO5444101, which is a selective inhibitor of CTSS, the weight of the obese mice decreased significantly.

An increasing number of studies have demonstrated that CTSS inhibitor has the potential to be a therapeutic target for many diseases. For example, CTSS inhibitor was reported to be effective for the therapy of pulmonary fibrosis (29). Additionally, Wei and co-workerd have evidenced that the CTSS inhibitor-Z-FL-COCHO (ZFL) could attenuate TGF-β-induced invasive growth in glioblastoma cells (30). Interestingly, the inhibition of CTSS activity could reduce lipid content and expression of adipocyte markers in obesity (14). Obesity leads to the excessive accumulation of WAT, which primarily consists of adipocytes that store lipid, and acts as a critical player in controlling the energy homeostasis of the whole body (31). It is well-documented that the prevention of adipogenesis might be a promising therapeutic method for obesity (32). In the present study, we discovered that the pathological changes of eWAT in the obese mice were improved by administering the CTSS inhibitor. Additionally, the diameter of adipocytes also decreased following the administration of the CTSS inhibitor. SREBP1 and adiponectin are important genes in repressing adipogenesis (33,34). In this study, the elevated mRNA and protein expressions of SREBP1, FASN, and leptin and the reduced expression of adiponectin in the obese mice were reversed by the CTSS inhibitor. Thus, the CTSS inhibitor had suppressive effects on the adipocyte formation in obese mice. Moreover, the expansion of WAT could contribute to the dysfunction of insulin resistance and glucose tolerance (35,36). The enhanced glucose tolerance and insulin resistance of the obese mice that resulted from being fed a HFD were diminished after the administration of the CTSS inhibitor.

The expanded adipocyte-derived free fatty acid and the chemotactic factor MCP-1 have been reported to have promotive effects on the trigger of pro-inflammatory M1- rather than anti-inflammatory M2-macrophage subsets in obese adipose tissue (38,39). In the present study, the CTSS inhibitor decreased the expression of MCP-1 in the eWAT adipose tissue of the obese mice. Further, research has shown that the M1-dominant macrophage phenotype results in the excessive release of pro-inflammatory factors (40). In the present study, we found that a HFD increased levels of iNOS, TNF-α, IL-1β, and IL-6 in mice, which were then decreased by the CTSS inhibitor. Arg1 is a marker of M2 (41). The decreased levels of Arg1 and IL-10 in the mice resulting from HFD induction were increased by the CTSS inhibitor. Other research has shown that the excessive generation of pro-inflammatory factors is closely related to the triggering of NF-κB inflammatory signaling (17).

For adipose tissue, the liver, which is a vital metabolic organ, serves as a critical player in lipid distribution and energy metabolism (42). It was reported that the prevention of hepatic lipid accumulation in obese mice can be achieved through many ways. For instance, policosanol attenuated hepatic lipid accumulation in mice by regulating AMPK-FXR-TGR5 cross-talk (43). In addition, Han et al have testified that the depletion of gut microbiota could suppress hepatic lipid accumulation in HFD-fed mice (44). In this study, we initially investigated the hepatic function parameters of the obese mice before exploring the lipid accumulation. We found that the elevated levels of TG, TC, AST and ALT in the HFD-induced obese mice were decreased after the administration of the CTSS inhibitor. Thus, CTSS inhibition appears to improve hepatic function parameters in obesity. Lee et al. reported that the suppression of lipid accumulation helps to protect against adipogenesis and HFD-induced obesity (45). Notably, the increased number of red lipid particles in the mice fed a HFD was later diminished by the CTSS inhibitor, which was also accompanied by decreases in the expression of SREBP1, FASN, and leptin and an increase in the expression of adiponectin.

To sum up, this study revealed the effects of CTSS inhibition on adipogenesis, inflammatory infiltration, and hepatic lipid accumulation in HFD-induced obese mice. Our findings provide a solid foundation for the exploration of therapeutic methods for obesity. However, this study also had some limitations. For example, the effects of CTSS inhibition on human obesity in a clinical setting were not explored.

Reporting Checklist: The authors have completed the ARRIVE reporting checklist. Available at https://atm.amegroups.com/article/view/10.21037/atm-22-5145/rc

Conflicts of Interest: All authors have completed the ICMJE uniform disclosure form (available at https://atm.amegroups.com/article/view/10.21037/atm-22-5145/coif). The authors have no conflicts of interest to declare.

Ethical Statement: The authors are accountable for all aspects of the work in ensuring that questions related to the accuracy or integrity of any part of the work are appropriately investigated and resolved. Animal experiments were performed under a project license (No. 2200596) granted by the ethics board of Guizhou Medical University in compliance with Guizhou Medical University guidelines for the care and use of animals.