EGFR is a receptor tyrosine kinase that is widely distributed on the surface of mammalian epithelial cells and is involved in cell proliferation and differentiation. EGFR binds to its ligand to form a dimer. It regulates the growth and reproduction of tumor cells by activating downstream signaling pathways through autophosphorylation, including the mitogen-activated protein kinase (MAPK) pathway and phosphatidylinositol 3-kinase (PI3K)/AKT pathway, among others (6). Multiple studies have shown that EGFR mutations are common in Asian, nonsmoker or mild smoker, female adenocarcinoma patients who may benefit from EGFR-tyrosine kinase inhibitor (TKI)-targeted therapy. The 2009 Iressa Pan-Asia Study (IPASS) compared gefitinib with carboplatin/paclitaxel in patients with advanced non-small cell lung cancer. It showed that gefitinib had significantly longer progress-free survival than carboplatin/paclitaxel and confirmed that EGFR gene mutations could be used as biomarkers to evaluate gefitinib efficacy (7). EGFR-TKI is approved for advanced non-small cell lung cancer with EGFR mutations.

The exclusion criteria were: second and third-generation EGFR-TKIs after first-line EGFR-TKI therapy; patients with other malignancies; patients with EGFR non-19 exon deletion or L858R point mutation; and patients whose efficacy could not be determined (for example, due to no measurable lesions, lack of imaging data, and loss to follow-up).

The protein expressions were evaluated after the NSCLC was diagnosed. The immunohistochemical results were judged independently by two pathologists. The presence of yellow or brownish-yellow staining in the membrane/cytoplasm of the tumor tissue without background staining was considered positive, and the absence of any yellow or brownish-yellow staining in the tumor tissue was considered negative.

Patients who met all of the inclusion and exclusion criteria had their medical histories collected retrospectively, including information on the use of first-generation TKIs, progression-free survival (PFS) for first-generation TKIs, and T790M mutation detection results in peripheral blood by digital polymerase chain reaction (PCR) or Super-ARMS after first-generation TKI resistance. The time from the first dose to radiographic progression was defined as PFS. The progression refers to the minimum sum of diameters of all target lesions measured in the whole treatment process as a reference, and the relative increase of diameters and diameters should be at least 20%, and the absolute increase of diameters and diameters should be at least 5 mm. If one or more new lesions appear, the disease progression is also considered.

Role of the funding source

The funding agencies did not participate in study design, data collection, data analysis, or manuscript writing. The corresponding authors were responsible for all aspects of the study to ensure that issues related to the accuracy or integrity of any part of the work were properly investigated and resolved. The final version was approved by all authors.

Basic characteristics of the study population 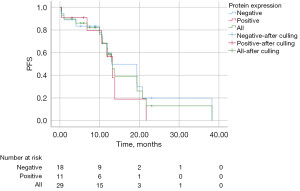 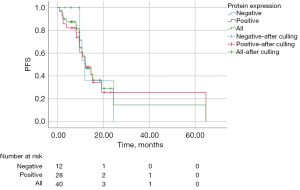 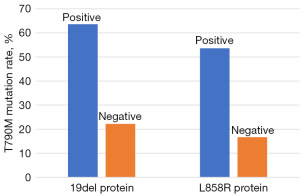 EGFR gene mutation, gene copy number, and protein expression are all common biomarkers used to predict the efficacy of EGFR-TKIs, and they frequently overlap (12). The relationship between the 3 biomarkers and the efficacy of targeted therapy was investigated in the IPASS study’s biomarker analysis. The results showed that in patients with a positive EGFR gene mutation, gefitinib significantly prolonged PFS and increased overall response rate (ORR) compared to chemotherapy. In the protein expression analysis, the gefitinib group had PFS in patients with positive protein expression, but there was no significant difference in ORR and overall survival (OS) between the two groups (13). As a result, EGFR mutations distinguished the benefit population more effectively than EGFR protein expression, establishing EGFR mutations as predictive markers of response to TKI therapy.

This study re-examined the relationship between protein expression and the efficacy of targeted therapy in stage IV lung adenocarcinoma patients with known EGFR gene mutations. Among 69 patients with EGFR mutations, 39 had corresponding protein expression detected. The mPFS was similar in the protein expression-positive and negative groups, showing no statistically significant difference. This was consistent with the findings of the IPASS study, which found that protein expression had little predictive value for the efficacy of targeted therapy. In a retrospective study of patients with advanced non-small cell lung cancer (NSCLC) treated with EGFR-TKI, patients with exon 19 deletion had better clinical benefit than those with exon 21 mutation, with PFS (13.2 vs. 10.8 months, χ2=4.700, P=0.030) and OS of 30.2 and 25.6 months, respectively, in the two groups (14). It has been proposed that this difference may be related to structural changes caused by different mutations and subsequent T790M mutations (15). In this study, patients with exon 19 deletion had a slightly longer mPFS than patients with the L858R point mutation (13.20 vs. 12.13 months).

The mPFS with targeted first-generation EGFR-TKIs is now estimated to be 10–14 months (16). There are diverse mechanisms of subsequently acquired resistance, including T790M mutation, c-MET amplification (17), HER-2 amplification (18), and PIK3CA mutation (19), with the most common being the T790M mutation, which accounts for more than half of acquired resistance (20). In the phase III AURA3 study, PFS was significantly longer in the osimertinib group than in the pemetrexed/platinum group (10.10 vs. 4.40 months, hazard ratio 0.30, 95% CI: 0.23–0.41, P<0.001). In addition, the ORR was also significantly better than in the chemotherapy group (71.00% vs. 31.00%, odds ratio 5.39, 95% CI: 3.47–8.48, P<0.001) (21), suggesting that osimertinib was more effective than platinum-based combination chemotherapy for patients with NSCLC who have a T790M mutation and have progressed after first-generation EGFR-TKI therapy. For patients with NSCLC who have the T790M resistance mutation, third-generation TKIs are currently recommended (22).

The efficacy of EGFR-TKI as first-line treatment for lung adenocarcinoma with EGFR gene mutation is not related to protein expression, similar to the results from IPASS study. However, this study discovered that patients with EGFR gene mutations and protein expression were more likely to have T790M mutations after first-generation EGFR-TKI treatment progression, and these patients benefited from third-generation TKI treatment.

The authors appreciate the academic support from the AME Lung Cancer Collaborative Group.

Funding: This work was supported by the Beijing SisKE Clinical Oncology Research Foundation (No. Y-Q201802-047).

Reporting Checklist: The authors have completed the REMARK reporting checklist. Available at https://atm.amegroups.com/article/view/10.21037/atm-22-3850/rc

Conflicts of Interest: All authors have completed the ICMJE uniform disclosure form (available at https://atm.amegroups.com/article/view/10.21037/atm-22-3850/coif). The authors have no conflicts of interest to declare.

Ethical Statement: The authors are accountable for all aspects of the work in ensuring that questions related to the accuracy or integrity of any part of the work are appropriately investigated and resolved. The study was conducted in accordance with the Declaration of Helsinki (as revised in 2013). The study was approved by the Ethics Commission of the First Affiliated Hospital of Anhui Medical University (PJ2022-10-43). Written informed consent to participate in this study was provided by all participants/next of kin.