On November 18, 2021, the results of the 2021 membership election for the two Chinese top academies, e.g. Chinese Academy of Engineering (CAE: http://en.cae.cn/cae/html/en/index.html) and the Chinese Academy of Sciences (CAS: https://english.cas.cn/) have been released and there are 90 new members for CAS and 104 new members for CAE. Membership of the CAE and CAS is China's highest academic title in science, engineering, and it is a lifelong honor. New members are selected every two years and the selection process of new members have several rounds of appraisals.

The election of the membership for CAE and CAS has attracted great attention in the academic communities and here we take the chance to present to you the publications from CAE and CAS in Annals of Translational Medicine (ATM), ATM has published a total of 81 articles from 23 members of CAE and 8 members of CAS according to the statistics on August 20, 2021.

While China’s academic field is flourishing, ATM is blooming and become a choice of publication venue for more and more recognized affiliations. For ATM, it is precisely a type of recognition—by the country's top academic institutions and the most important think tanks in the country in the form of publication venue choice—that makes ATM stay in the scientific research fronts and able to further realize its mission of translating between bench and bedside. ATM's educational value is mostly based on the objective opinions of a group of field experts within the scientific community.

To highlight the publications from the two Chinese top academies, we are glad to announce the launch of the “Sharp Minds in China-CAS and CAE” column in ATM: https://atm.amegroups.com/post/category/sharp-minds-in-china-cas-and-cae.

The Chinese Academy of Sciences (CAS) is the linchpin of China’s drive to explore and harness high technology and the natural sciences for the benefit of China and the world. Comprising a comprehensive research and development network, a merit-based learned society and a system of higher education, CAS brings together scientists and engineers from China and around the world to address both theoretical and applied problems using world-class scientific and management approaches. 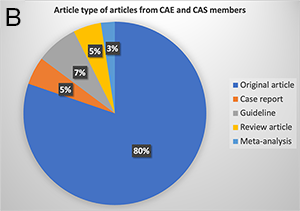 The growth of international influence

Looking back, things have not been easy for ATM from bud to blossom. ATM has been borne as an open access journal for 9 years and gone through a history of landmark indexing (indexed by PubMed in 2014, indexed by ESCI in 2016, indexed by SCIE in 2018). Finally, ATM obtains its latest impact factor of 3.932 (for the citation year of 2020).

By the end of December 2021, ATM features an international editorial board of 180 editorial board members from 22 countries, including USA, China, Italy, UK, Germany, Japan etc. (figure 3). 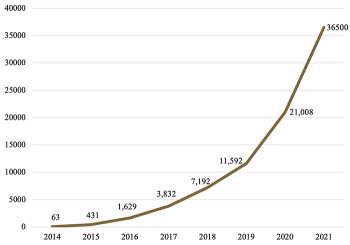 We fully understand that ATM cannot flourish without strong support from the editorial board members, authors, reviewers and readers from all circles. Therefore, we would like to extend our sincere appreciation for your kind help, support, and congratulations for the publication in ATM. May ATM become a global leading journal in the field of medicine!