Respiratory tract infections represent the most common cause of sickness in the child population of developing countries (1). In the Czech Republic, the highest prevalence of these health problems occurs in industrial parts of Northern Bohemia and Northern Moravia (2-4). These are areas of extreme contaminations of the environment, mostly due to the presence of coal mines, heavy chemical industry and power stations using low quality coal. In addition, the high frequency of automobile traffic with high contamination particles from car exhausts represents another source of contamination. The intensity of this contamination is steadily increasing due to the aging carpool, as the average age of a car in the Czech Republic is around 14 years.

Ever increasing numbers of respiratory problems, allergies and asthma led us to the studies focusing on a search for possible solutions. Among possible solutions are for children from the most polluted regions to have regular stays in environmentally clear areas, with optimal nutrition, higher physical activity and stimulation of mucosal immunity using specific immunomodulators, particularly β-glucan (2-6).

It is hypothesized that medium physical exercise can result in an increase of immune mechanisms with subsequent lower risk of upper respiratory infections. On the other hand, heavy physical challenge might suppress immune mechanisms and result in higher risk of infections. Numerous well-designed animal studies demonstrated negative effects of long term physical challenge on lowering the risk of upper respiratory problems. These infections are a direct result of the lower activity of macrophages, NK cells, antigen presentation and other immune mechanisms. Recently, attention focused on finding ways to increase the level of immune reactions during physical load by supplementation with various immunomodulators such as zinc, amino acids, or antioxidants (7,8).

β-glucans are natural polysaccharides isolated from various natural materials such as yeast, mushrooms, seaweed or grains. β-glucans show notable physiological effects; this is their most important quality and the reason why so much attention has been devoted to these molecules. They belong to a group of physiologically active compounds, collectively termed biological response modifiers. In Asian medicine, consummation of different medicinal mushrooms (such as shiitake or maitake) has a long tradition. In detailed studies of the biological effects of these mushrooms, especially their anticancer action, β-glucans were again found to be a main cause of non-specific immunomodulation. Several thousands of published studies showed that glucan has significant effects on both branches of immune reactions, on reducing stress, lowering cholesterol, regulating the blood sugar and protection against the negative effects of environmental toxicity [for review see (9)]. Despite decades of intensive research, studies documenting the effects of glucan in the prevention of negative effects of physical challenge are rare.

Currently, it is normal to evaluate the modulation of immune reaction not only with respect to the complexity of defense reactions, clinical manifestation and lung functions, but also by using a 6-minute walking test (6MWT). It is expected that a response of an individual on physical challenge can offer important information about overall health status of an individual and resulting risk of numerous diseases (10-12). The main reasons why the 6MWT test is so popular is its simplicity, low financial requirements and solid reflection of the overall health. Several modifications and methodic suggestions have been made in the last few years, resulting in trying to standardize this test. Materials from the American Society of Pulmonary Physicians and from the Czech Society of Pneumology Physicians led to subsequent studies evaluating effects of both technical conditions (such as size and length of the track) and personal conditions (such as age, sex, weight or race of the tested individual) (13-15). More and more studies are trying to prepare standards for the 6WMT in a healthy population in relation to age, sex and other parameters (3,16-19). These facts led us to try to evaluate the physical endurance of children during their stay at the Sanatorium EDEL, Zlate Hory, Czech Republic. This paper offers the results of our clinical study describing the possibilities of using the 6WMT test for evaluation of the effects of the curative stay of children with chronic respiratory problems.

The same protocol that was previously described (4) was used throughout this study. Briefly, a randomized, double-blind, placebo-controlled trial compared β-glucan #300 and a placebo in children. Seventy seven children (43 females, 34 males, average age 10.3±2.1) from the sanatorium were enrolled in the 4-week trial testing for respiratory diseases. The clinical trial was conducted at the Sanatorium EDEL (Zlate Hory, Czech Republic) and the study was approved by the Ethics committees of the Public Health Institute based in Usti nad Labem and Sanatorium EDEL, Zlate Hory, Czech Republic. As a part of the clinical evaluation at the starting point of the study, all children were tested for their height, weight, and body mass index (BMI) and its percentile has been calculated in relation to age and sex (20). Thirty two children (19 females and 13 males) formed the group supplemented with glucan, 45 children (24 females and 21 males) formed the control (placebo) group. This study was performed in agreement with Helsinki declaration (revised version 2000.09.01) and in full compliance with the rules for clinical testing in the Czech Republic. Parental consent was given in all cases. Subjects were routinely evaluated by the medical staff.

In all subjects we obtained saliva at the beginning of the study and at the conclusion of their stay in Sanatorium. We used identical times (between 8 and 9 a.m.) for sampling, so the possible influence of circadian rhythms could be eliminated.

Saliva was collected using a commercial Salivette device (Sarstead, Orsay, France). After 2 minutes of chewing, the cotton swab was added into a sterile container and centrifuged at 1,000 g for 15 minutes and stored at −15 °C. We measured the levels of sIgA using nephelometer Siemens BMII as suggested by the manufacturer.

All participants absolved at the beginning and at the end the 6MWT based on suggested development, including evaluation of additional parameters such as frequency before and after physical stress, oxygen saturation, interruption of stress due to the tiredness. These tests were done 2 h. after the meal. We used recommendations of the American Thoracic Society (21).

In addition, both weight and height were measured and BMI calculated. BMI levels were subsequently transferred into age percentiles (Body Mass Index for Age Percentiles) according to the CDC (19). We found that CDC percentiles are identical to levels found in the population of Czech children of the same age population as determined by The National Institute of Public Health, Prague, Czech Republic. All tested children had minimal physical activity for 2 h. prior the test with guaranteed no special energetic income. The track used for all testing was long and wide enough to ensure no risk of physical constraints during the test.

At the beginning and the end of the study we also evaluated eNO levels using the American Thoracic Society recommendations (21) as described in our previous studies (4-6). 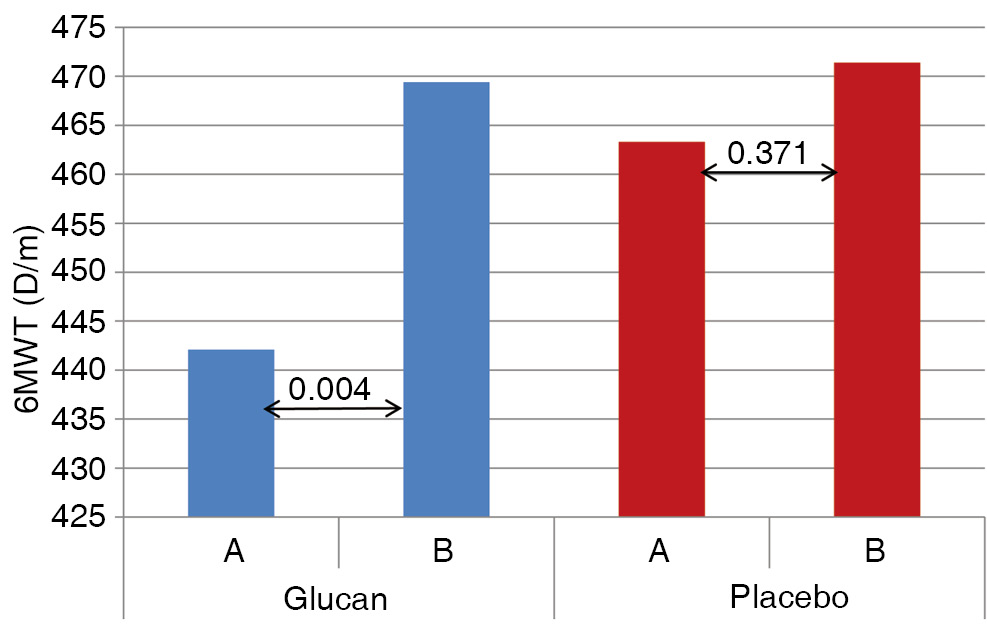 Figure 1 Distance walked in groups of children supplemented with glucan or placebo. (A) Before therapy; (B) after therapy. 6MWT, 6-minute walking test. 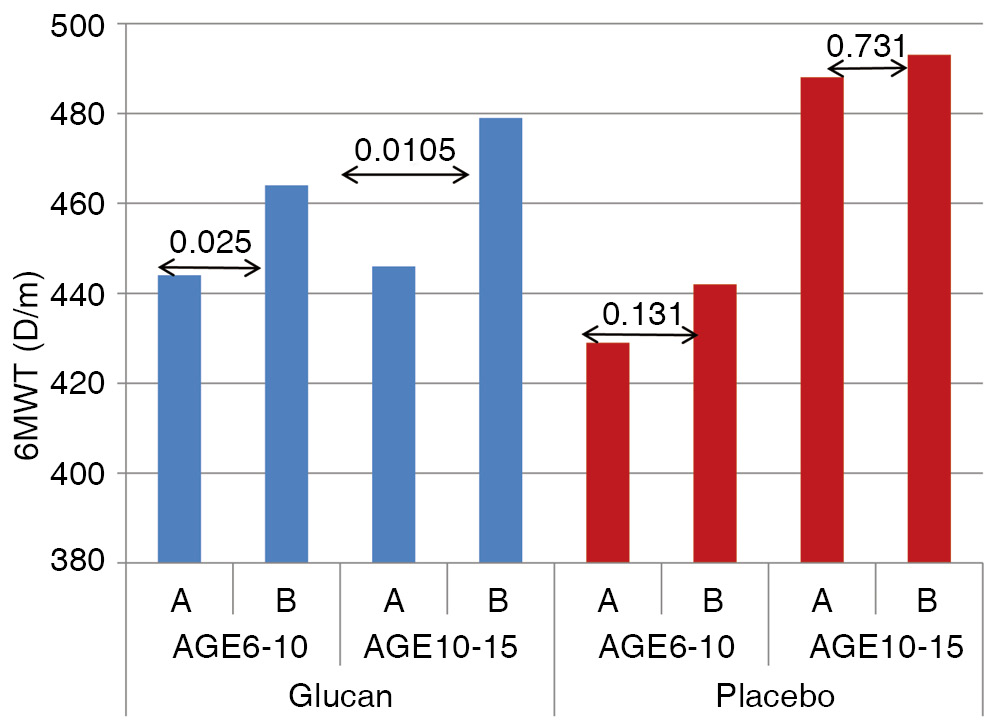 Figure 2 Effect of glucan and placebo on the 6MWT in two different age groups. (A) Before therapy; (B) after therapy. 6MWT, 6-minute walking test. 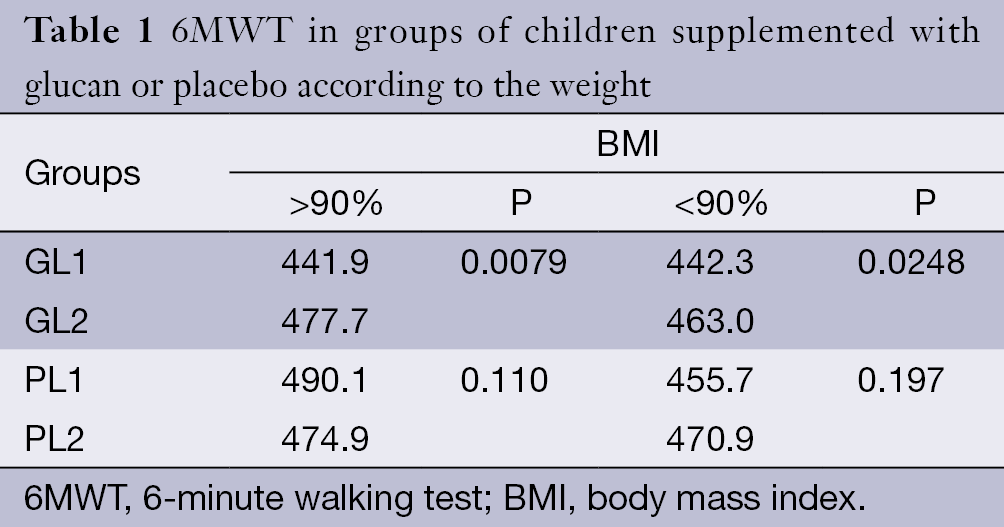 Figure 3 shows levels of eNO in both glucan-supplemented and placebo group. In the glucan group we found significant decrease of eNO levels from 14.59 to 10.16 ppb (P<0.04), the decrease was also significant in the placebo group (P<0.001). 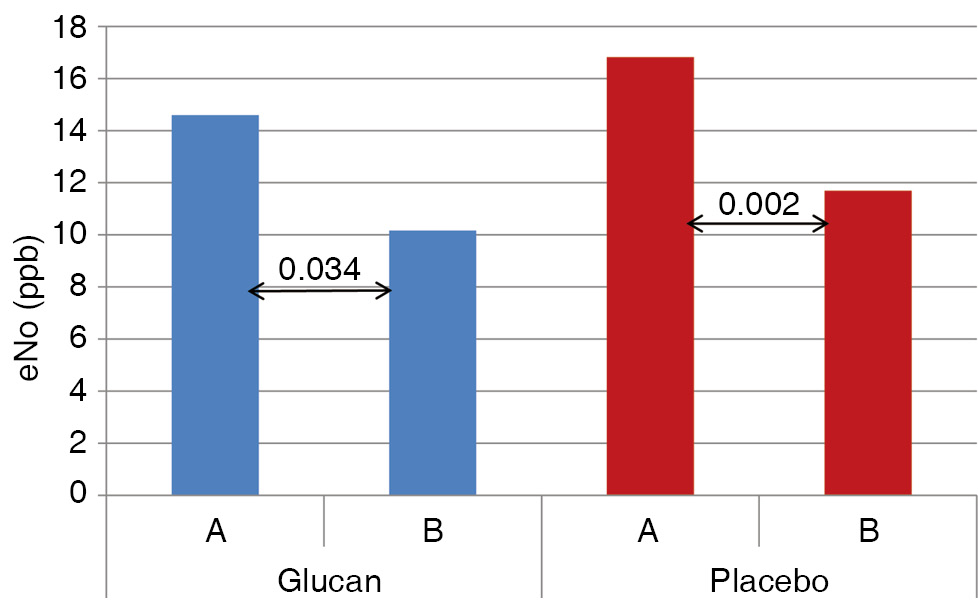 Figure 3 Effects of glucan on eNo levels. (A) Before therapy; (B) after therapy. 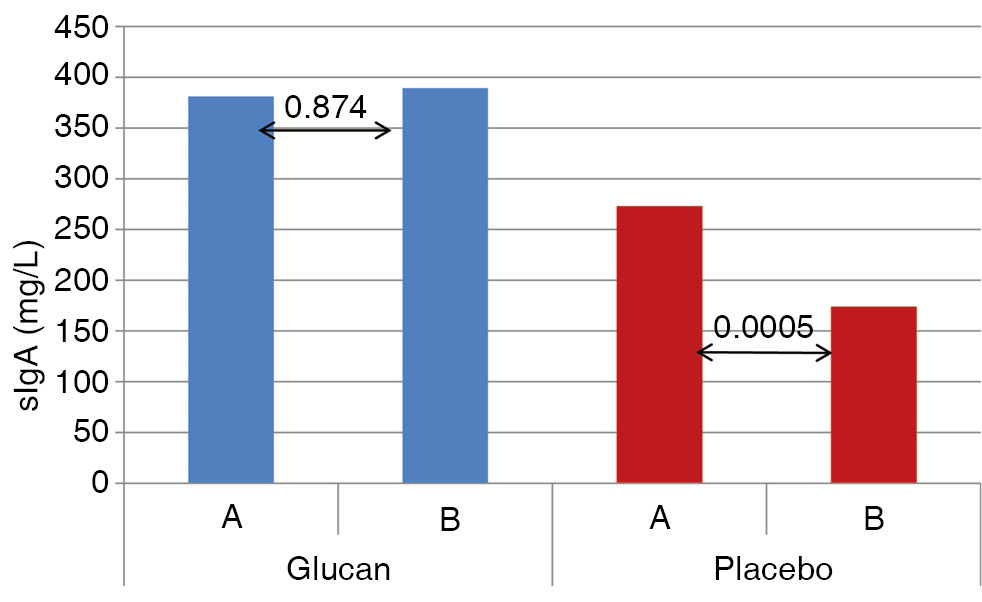 Figure 4 Effects of glucan on levels of sIgA. (A) Before therapy; (B) after therapy.

The 6MWT test is a simple, objective and reproducible evaluation of functional activity of an individual (22). This test is optimal for evaluation of cardiovascular and respiratory problems. However, it is getting more and more common in testing of interventions before and after various medical or rehabilitating procedures and for testing of general endurance (12,13,17,18). The high reproducibility of this test allows the use as a reliable indicator of the quality of life (4,10,21,22). More information about indication and contraindication for this test are given in the American Thoracic Society document (23).

Our study was fully based on these recommendations. One has to keep in mind that the comparison of our results, with that of other authors, when evaluating different age groups, living in different geographical and climatic conditions, has limited values. Another problem might be the use of different types of tracks, different lengths of the track or different surfaces of the track. Similar to the published data, our results showed significant differences with respect to age and sex (13,14,16,17,19,24). Roush et al. (15) found no correlation between BMI and 6MWT levels, but these authors did not consider recalculating BMI into percentiles (20). The 20% obese children mentioned in this study is less than was found in our groups. This difference might be responsible for the differences in the physical activity, as in our group of children are the anamnestic data on free time physical activities very critical, which subsequently might influence the lower distances found in our 6MWT tests. World Health Organization informs that at least 60% of population has suboptimal physical activity (11). Significant changes in the 6MWT correspond with the level of illness (11,12), which was confirmed by our results.

BMI levels in our groups differ with only 22.2% of children with higher weight than 90% percentile BMI vs. 43.8% in the glucan group. These differences are shown in Table 1. In the glucan group, we found a significant increase of 6MWT levels particularly in the subgroup of children with highest weight, whereas in the placebo group this increase was very limited (in some cases we even found a decrease of the test levels). The same effects were found in subgroups with normal weight. It is possible to speculate that these findings might reflect the fact that the tested children had to use higher physical challenge than they were used to do. The overall physical conditions of the child population in the Czech Republic have a decreasing trend.

Our findings might be the result of glucan supplementation, as glucan positively affects mental stress, and also unexpected or strong physical challenge (25,26). In addition, glucan was repeatedly confirmed to have positive effects on children with respiratory problems (4-6,27). The findings correlate with the levels of sIgA, where we found no changes in the glucan supplemented group, but significant decrease in the control group. These data correlate with other authors (7,8,24,28). Our findings of the eNO levels are in close relation to the changes in quality of environment, as was previously documented (2,3,21). Children living in the Sanatorium Edel, Zlate Hory, Czech Republic, are exposed to a significantly better environment, both outside and inside the buildings. The reduction of exposition to passive smoking in more than 50% of the tested population represents another positive influence. Our data showed strong effects of glucan supplementation on the overall health status of all children in this group. We propose than the stabilization of the sIgA levels represents the most positive effect of glucan.