Extubation failure is associated with high mortality and prolonged intensive care unit (ICU) stay (1,2). Prolonged use of ventilator leads to various complications including ventilator-associated pneumonia, lung barotrauma, and muscle weakness; therefore, it is ideal to wean the patients from the ventilator as soon as possible (3-5).

Several studies have investigated the predictors of successful extubation; however, the sensitivity and specificity of these factors have been largely inconsistent (6,7). Even 2 h spontaneous breathing test (SBT), which is the current weaning practice, cannot completely predict successful extubation (8,9). The development of readily available point-of-care assays that can help predict weaning success or mortality is of immense clinical relevance.

However, the detailed mechanism of NOX4 in ventilator-induced lung inflammation and injury needs to be explored in further studies. Till date, no studies have assessed the association between plasma NOX4 level and clinical outcomes of critical ill patients with mechanical ventilation.

Based on the hypothesis that plasma NOX4 may predict clinical outcomes such as successful weaning from mechanical ventilation and 28-day mortality, we performed serial assessment of plasma NOX4 levels in intubated patients.

We present the following article in accordance with the Strengthening the Reporting of Observational studies in Epidemiology (STROBE) reporting checklist (available at http://dx.doi.org/10.21037/atm-20-4252).

Out of the 542 evaluated patients, 358 were excluded because of age criteria (n=15), intubation initiated 48 hours after ICU admission (n=203), presence of neuromuscular disease (n=5), inability to obtain consent (n=11), and duration of mechanical ventilation <7 days (n=124). Thus, 184 patients were enrolled in this study (Figure 1). This study was conducted in accordance with the Declaration of Helsinki (as revised in 2013) and harmonized Tripartite Guidelines for Good Clinical Practice from the International Conference on Harmonization. The study was approved by the local ethics committee (IRB number: 2017-47) and informed consent was obtained from each participant. 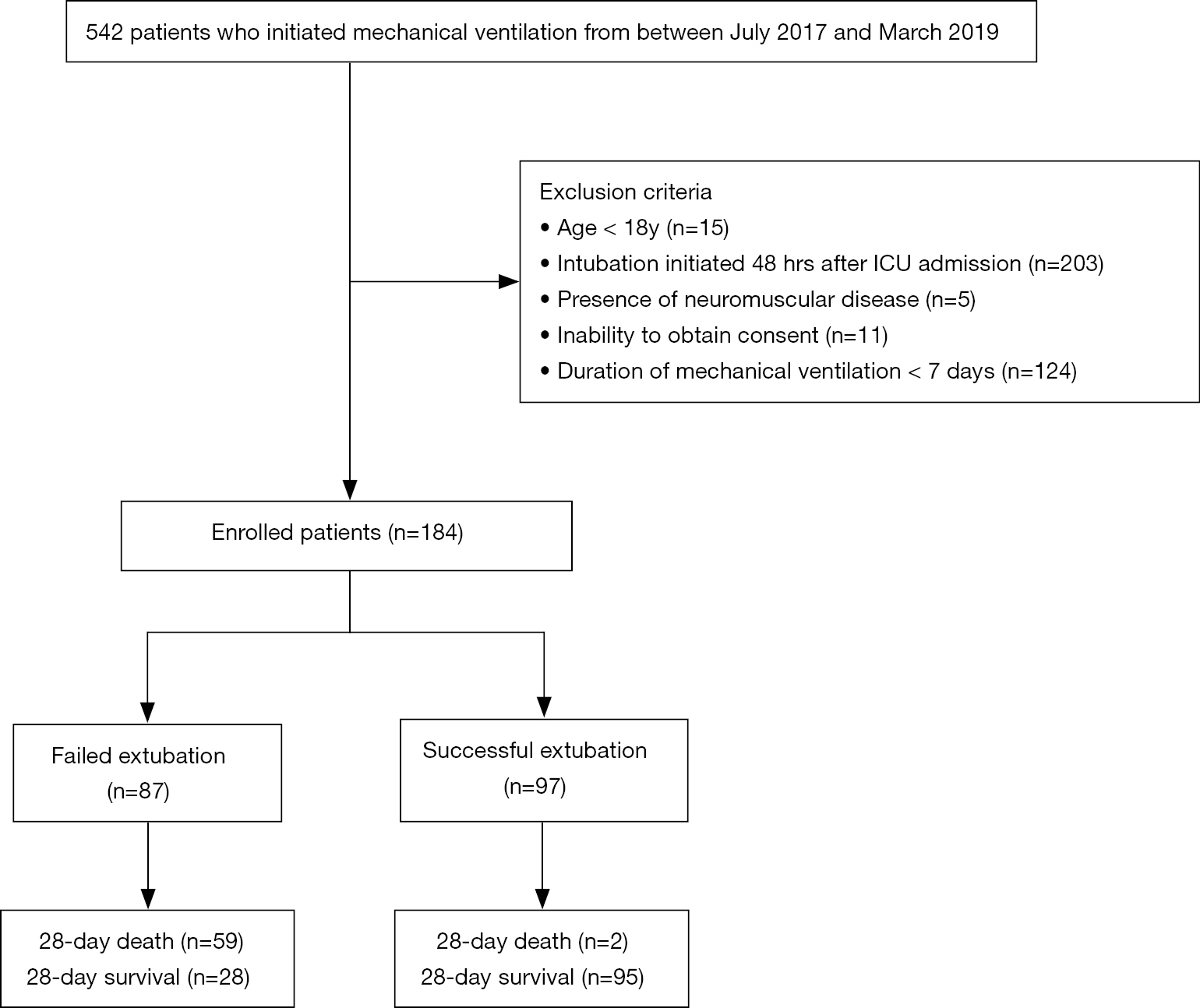 Data pertaining to baseline demographic variables, comorbid diseases, indication for intubation, and clinical variables were collected. Severity of illness at ICU admission was assessed using the Acute Physiology and Chronic Health Evaluation (APACHE II) score and Sequential Organ Failure Assessment (SOFA) score. APACHE score includes 12 physiological variables, age and previous health status and can give a single score with a maximal of 71. The SOFA score uses the severity of six organ system (liver, lung coagulation, cardiovascular, renal and neurologic system) and offers a final score from 6 to 24. Type II diabetes, hypertension, chronic renal failure, history of coronary heart disease, heart failure, cerebrovascular disease, and malignancy were evaluated. Each comorbid condition is assigned a weight ranging from 1 to 6 based on the relative mortality risk and Charlson comorbidity index was calculated by totaling the assigned weight for each comorbid condition (16). Glascow Coma Scale (GCS) score is a neurologic scale to assess the patient’s consciousness in the range from 3 to 15. Clinical outcomes included weaning success in 3 weeks and 28-day mortality.

The ICU attending physicians performed daily weaning assessment after enrollment; patients who qualified the following criteria were considered to have passed the weaning assessment: (I) improvement or resolution of the underlying condition; (II) PaO2 >60 mmHg at FiO2 <0.4 and positive end-expiratory pressure (PEEP) ≤5 cmH2O along with other clinical criteria; (III) GCS score >13. All patients who passed weaning assessment underwent 2-hour SBT wherein the patients were placed on spontaneous mode of weaning with low pressure support (8 cmH2O) and zero PEEP with the same FiO2 (<40%) for at least 2 h. SBT was passed if patients did not develop any of the following signs during the 2 hour-SBT: respiratory rate >35 breaths per minute; arterial oxygen saturation <90%; heart rate >140 beats/min or systolic blood pressure >180 or <90 mmHg; sustained increase or decrease in heart rate >20%, or signs of respiratory distress such as agitation and diaphoresis.

Weaning failure was defined as either the failure of SBT or the need for reintubation within 48 hours of extubation. Rapid shallow breathing index (RSBI) score was obtained by dividing respiratory rate by tidal volume and was measured when the patients were presumed ready for extubation. The scoring was conducted by two clinicians with more than 5 years of experience in ICU and the investigators were blinded to patient identity.

Plasma was obtained within 24 hours from initiation of mechanical ventilation (D1) and at day 7 (D7). After supine rest for at least 10 min, fasting blood samples were collected and centrifuged at 2,000 rpm for 15 min at room temperature. Plasma samples were stored at ‒80 °C until further processing and assayed using Human NOX4 (NADPH oxidase 4) ELISA kit (MyBiosource, USA).

We calculated that 149 patients per group were required to have a 90% chance of detecting as significant at the 5% level a mean ± SD difference of 15±40 pg/mL in plasma NOX4 between groups.

Categorical variables are reported as frequency (percentage) and continuous variables are expressed as median [interquartile range (IQR)]. Categorical variables were compared using Chi-square test while continuous variables were compared using Mann-Whitney U test. The non-parametric Wilcoxon signed-rank test was used for comparisons between D1 and D7 measurements. Patients were stratified into groups according to low or high NOX4 concentrations using the median value for each as the cut-off point (D1 NOX4 level: 16.8 ng/mL, D7 NOX4 level: 18.2 ng/mL).

Multivariate logistic regression analysis was performed to evaluate the risk factors for weaning failure. The effect of plasma NOX4 level was assessed after adjusting for confounding factors and important risk factors. Variables that were associated with P values <0.1 in the univariate analysis were incorporated in the multiple logistic regression model. Kaplan-Meier survival curves were constructed for the 28-day period after ICU admission. Cumulative survival rates were compared using the log-rank test; the association between D7 NOX4 level and probability of 28-day mortality was assessed using Cox regression analysis. The non-parametric Wilcoxon signed-rank test was used for paired comparisons of the longitudinal change between D1 and D7 NOX4 levels.

Characteristics of the study population

The demographic and baseline characteristics of the study population are summarized in Table 1. A total of 184 patients were enrolled; of these, only 97patients were successfully extubatedwithin3 weeks and 61 patients died within 28 days from ICU admission. Patients with extubation failure were significantly older (76 vs. 69 years, P=0.003).The APACHE II score and SOFA score in the failed extubation group were significantly higher than that in the successful extubation group {median (IQR), APACHE: 23 [20–28] vs. 19 [15–23]; P<0.001, SOFA: 9 [7–12] vs. 6 [5–9]; P<0.001}; however, no significant between-group difference was observed with respect to Charlson comorbidity index [2 (1, 3) vs. 2 (1, 3), P=0.225]. The indications for intubation and the proportion of patients with pneumonia at admission were not different between the two groups. 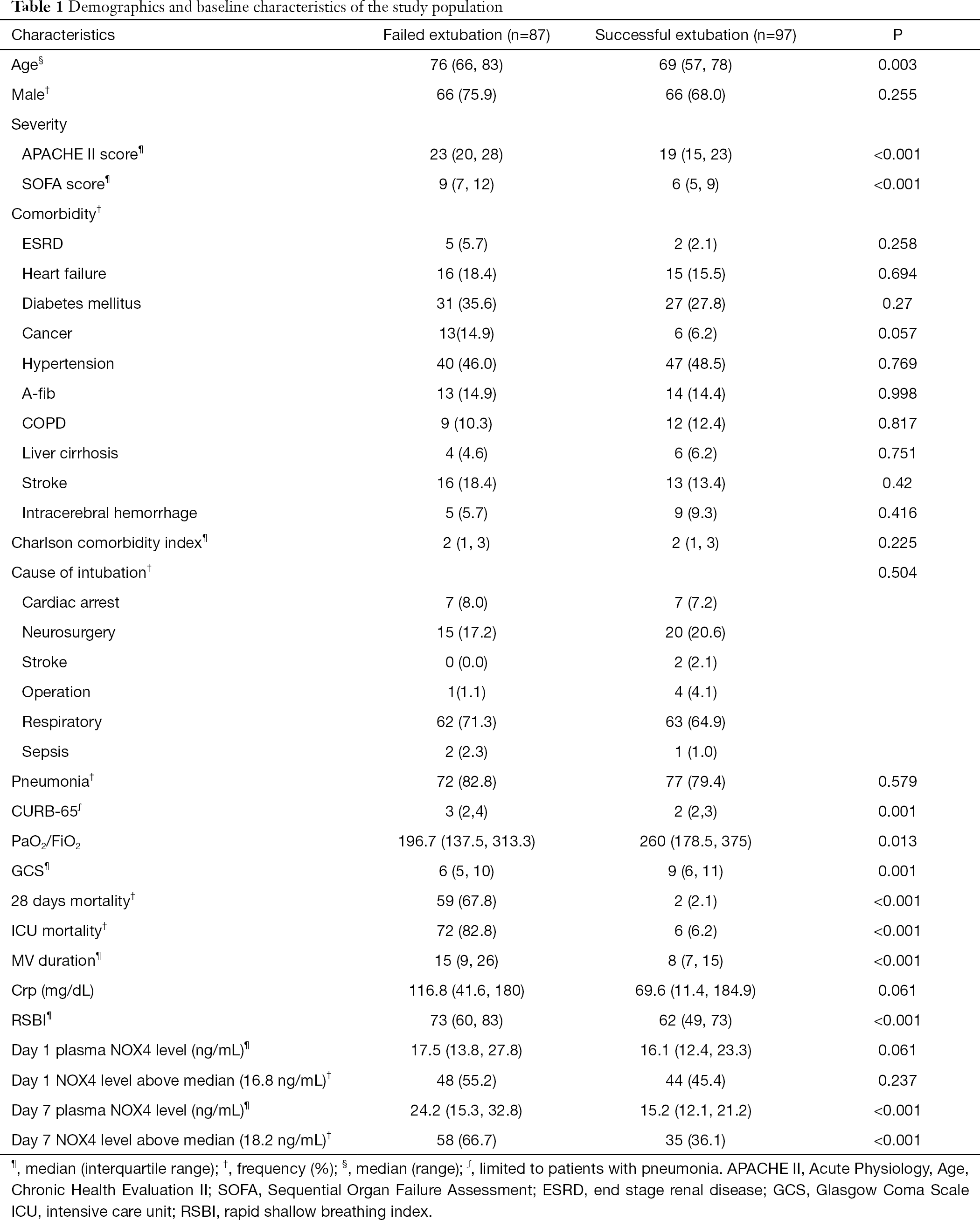 Figure 4 Longitudinal trend of plasma NOX4 level between day 1 and day 7 from start of mechanical ventilation according to weaning outcome (A) and 28-day mortality (B). *, P<0.05. NOX4, NADPH oxidase 4.

Several indices have been used to predict successful extubation such as RSBI and maximal inspiratory pressure (MIP) (17-20). However, the reported efficacy of these parameters for predicting successful extubation has been inconsistent; in addition, assessment of these indices requires a special device, which is a limitation (21-24).

McConville et al. reported that improvement in the underlying disease process is superior to general rules regarding readiness for initiation of SBT (25). Therefore, more objective measures are required to guide the recovery of underlying cause of respiratory failure and to predict the likelihood of extubation.

While Canugovi et al. reported that NOX4 expression and ROS levels increase with age (32), our data showed no significant correlation between the plasma NOX4 level and age (D1 NOX4: r=‒0.015, P=0.839, D7 NOX4: r=0.069, P=0.355). Patients with extubation failure were significantly older than those with extubation success. However, we found that NOX4 levels >18.2 ng/mL on D7 showed an independent association with extubation failure and 28-day mortality after adjusting for age and other important clinical variables. Also, the Kaplan-Meier survival curves and Cox-hazard proportional model supported the association between higher D7 NOX4 level and 28-day mortality.

To the best of our knowledge, this is the first study that investigated plasma NOX4 levels in critically ill patients. Despite the complex biological mechanisms associated with NOX4, we found obvious clinical relevance of NOX4 levels in our patients.

In multivariate analysis of our data, while APACHE II score was independently associated with both clinical outcomes, SOFA score was independently associated with only 28-day mortality. Similarly, the previous studies showed that APACHE II scoring system predicted early weaning as well as mortality (33,34). While Matic et al. reported that an APACHE II score of <20 indicated greater success in weaning the patient from the ventilator (35), some studies found that APACHE II failed to predict successful weaning from mechanical ventilation (36,37). A multicenter study conducted in surgical ICUs reported that SOFA score was a risk factor of extubation failure (38). The discrepancy between studies may be explained by heterogeneity with respect to subjects and the size of the study population.

Use of NOX4 level as a prognostic biomarker may be more accurate because it is significantly related to both weaning outcome and mortality. This study is the first clinical study that employed human blood samples to evaluate the relationship between plasma NOX4 level and clinical outcomes including weaning failure and 28-day mortality.

However, some limitations of our study should be considered while interpreting the results. First, this study was conducted at a single university-affiliated hospital and the study population was relatively small. Therefore, further validation is required before our results can be generalized to other clinical settings. Second, measurement of NOX4 level was done at D1 and D7 of ICU admission. However, analysis at multiple time points may be required to determine the most appropriate measurement time-point to predict clinical outcomes. Third, invitro experimental data to support the potential prognostic utility of plasma NOX4 level is lacking. The exact underlying mechanism by which NOX4 activation contributes to extubation failure and mortality needs to be explored in further studies.

In conclusion, this study showed that higher D7 plasma NOX4 level was significantly associated with weaning failure and 28-day mortality among intubated patients. Serial measurements of plasma NOX4 level may help predict the clinical outcomes. Further larger studies are needed to determine whether plasma NOX4 level may be a potential prognostic biomarker in patients with mechanical ventilation.

Funding: This research was supported by the Bio & Medical Technology Development Program of the National Research Foundation (NRF) funded by the Korean government (MSIT) (NRF-2017M3A9E8033225 to JY Hong) and was supported by the National Research Foundation of Korea Grant funded by Korean Government (NRF 2020R1A2C1011455 to JY Hong).This study was supported by 2018 Research Grant from Kangwon National University and 2018 Research Grant from Kangwon National University Hospital (to Y Hong). The funders had no role in study design, data collection and interpretation or preparation of the manuscript.

Reporting Checklist: The authors have completed the STROBE reporting checklist, available at http://dx.doi.org/10.21037/atm-20-4252

Conflicts of Interest: All authors have completed the ICMJE uniform disclosure form (available at http://dx.doi.org/10.21037/atm-20-4252). The authors have no conflicts of interest to declare.

Ethnical Statement: The authors are accountable for all aspects of the work in ensuring that questions related to the accuracy or integrity of any part of the work are appropriately investigated and resolved. This study was conducted in accordance with the Declaration of Helsinki (as revised in 2013) and harmonized Tripartite Guidelines for Good Clinical Practice from the International Conference on Harmonization. The study was approved by the local ethics committee (IRB number: 2017-47) and informed consent was obtained from each participant.