Skin melanoma survival is not superior in females in the new stage IIID of the 8th edition of the staging system: an analysis of data from the Surveillance, Epidemiology, and End Results (SEER) database

The etiology of skin melanoma is not yet clear. Several factors, such as genetics and environmental exposure (e.g., ultraviolet (UV) rays, smoking, drug use, and drinking), probably affect the incidence of skin melanoma. Females have a clear advantage over males in terms of melanoma-specific survival (MSS). Several studies have verified the advantages of female sex in many countries and different populations; these advantages have included a low melanoma incidence and high long-term survival rates. Furthermore, these advantages of female sex have increased gradually in recent years and have been verified in all pathological stages of melanoma (4-7). However, there is no clear theoretical foundation that could account for this phenomenon.

The 8th edition of the American Joint Committee on Cancer (AJCC) staging system for skin melanoma was published in 2017. The staging system for melanoma was adjusted by reducing the importance of the mitotic rate in the T category and adjusting the N category to include more details (8,9). Stage III was divided into 4 subgroups, with a new IIID subgroup, and the IIIA, IIIB and IIIC subgroups were adjusted (Figure 1). In past studies, the long-term survival rate in females was verified to be higher than that in males (10). However, no studies have investigated sex-specific survival based on the 8th edition of the staging system, especially in patients with stage III disease. Therefore, we selected skin melanoma patients from the Surveillance, Epidemiology, and End Results (SEER) database in the United States. The aim of our study was to evaluate sex-specific survival in patients with stage III disease based on the 8th edition of the staging system. The guidelines in the Strengthening the Reporting of Observational Studies in Epidemiology (STROBE) statement were followed in this study (available at http://dx.doi.org/10.21037/atm-20-3332). 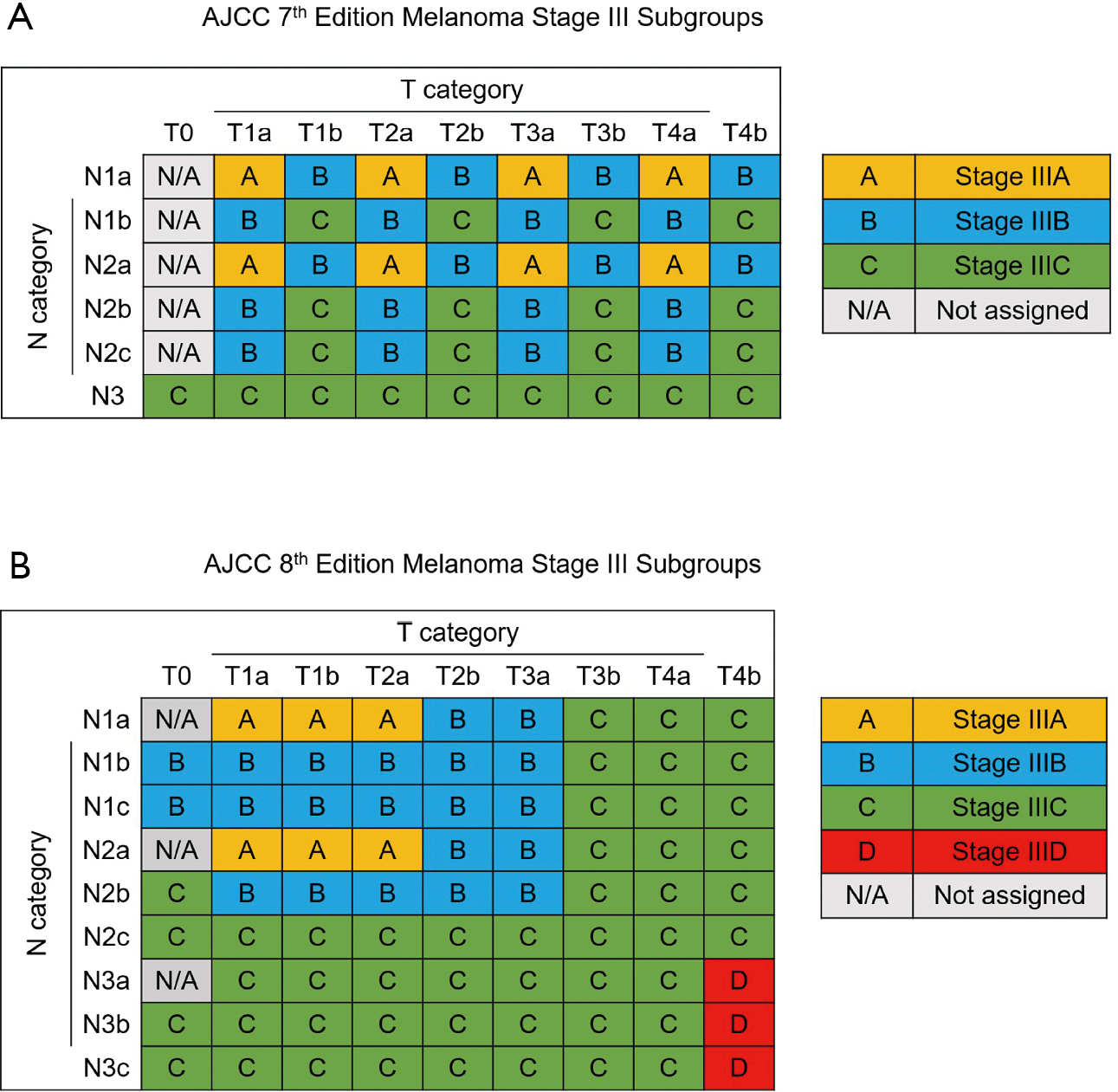 All procedures performed in studies involving human participants were in accordance with the ethical standards of the institutional and/or national research committee and with the 1964 Helsinki Declaration and its later amendments revised in 2013 or comparable ethical standards.

Patients were selected from the SEER database. The current SEER database is a population-based cancer registry sponsored by the National Cancer Institute of the United States. We selected individuals diagnosed with skin melanoma between 2004 and 2015. Based on the 7th and 8th editions of the melanoma staging system, patients diagnosed with pathological T0-T4b, N1a-N3c and M0 disease were enrolled. Other enrollment criteria included skin melanoma as the first malignant tumor, active follow-up, and positive histology. Patients were excluded if diagnosed during autopsy or if the cause of death was unknown.

Baseline data, including patient information (age, sex), and melanoma characteristics (location, subtype, Clark class, Breslow thickness, mitotic rate, and ulceration) were obtained from the SEER database. In this study, overall survival (OS) and melanoma-specific survival (MSS), which were collected from the SEER database through December 31, 2015, were used to evaluate the outcomes. OS and MSS were defined as the intervals from diagnosis until death from any cause or death as a result of melanoma, respectively.

We used one-way ANOVA with a multiple comparison post hoc test and a chi-square test to analyze all continuous and categorical variables with normal distributions. The Kruskal-Wallis test was used to analyze data with nonnormal distributions after adjusting for multiple comparisons. Kaplan-Meier survival curves were estimated and compared with the log-rank test. Cox regression analysis was used to calculate hazard ratios (HRs) and 95% confidence intervals (CIs). Risk factors with a P value <0.1 in the univariate analysis and with substantial clinical value were selected for the multivariate analysis. A two-sided P value <0.05 was considered statistically significant. SPSS 24.0 (SPSS, Chicago, IL, USA) and GraphPad Prism 7.0 (GraphPad Software, San Diego, CA, USA) were used for the analyses. 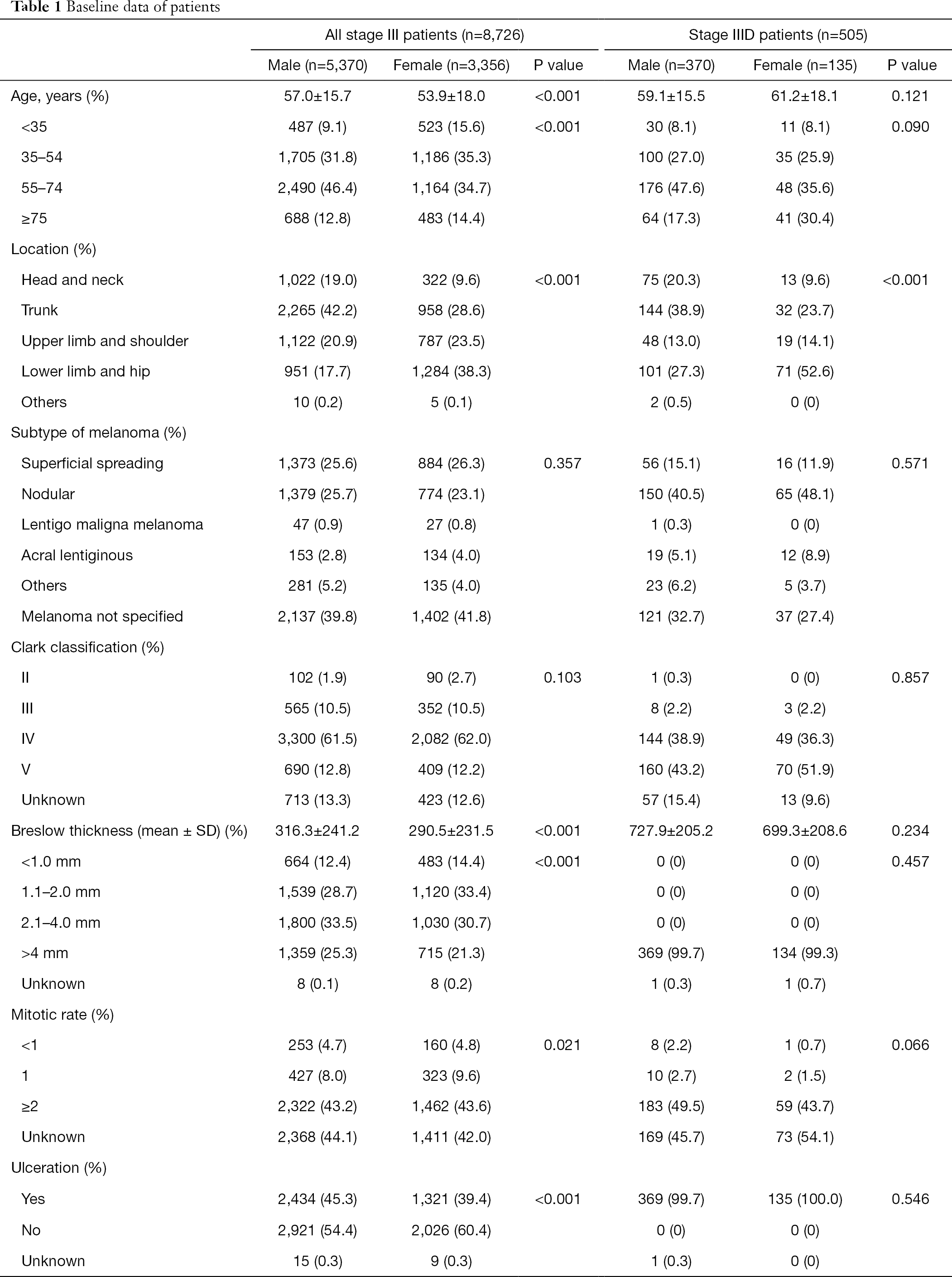 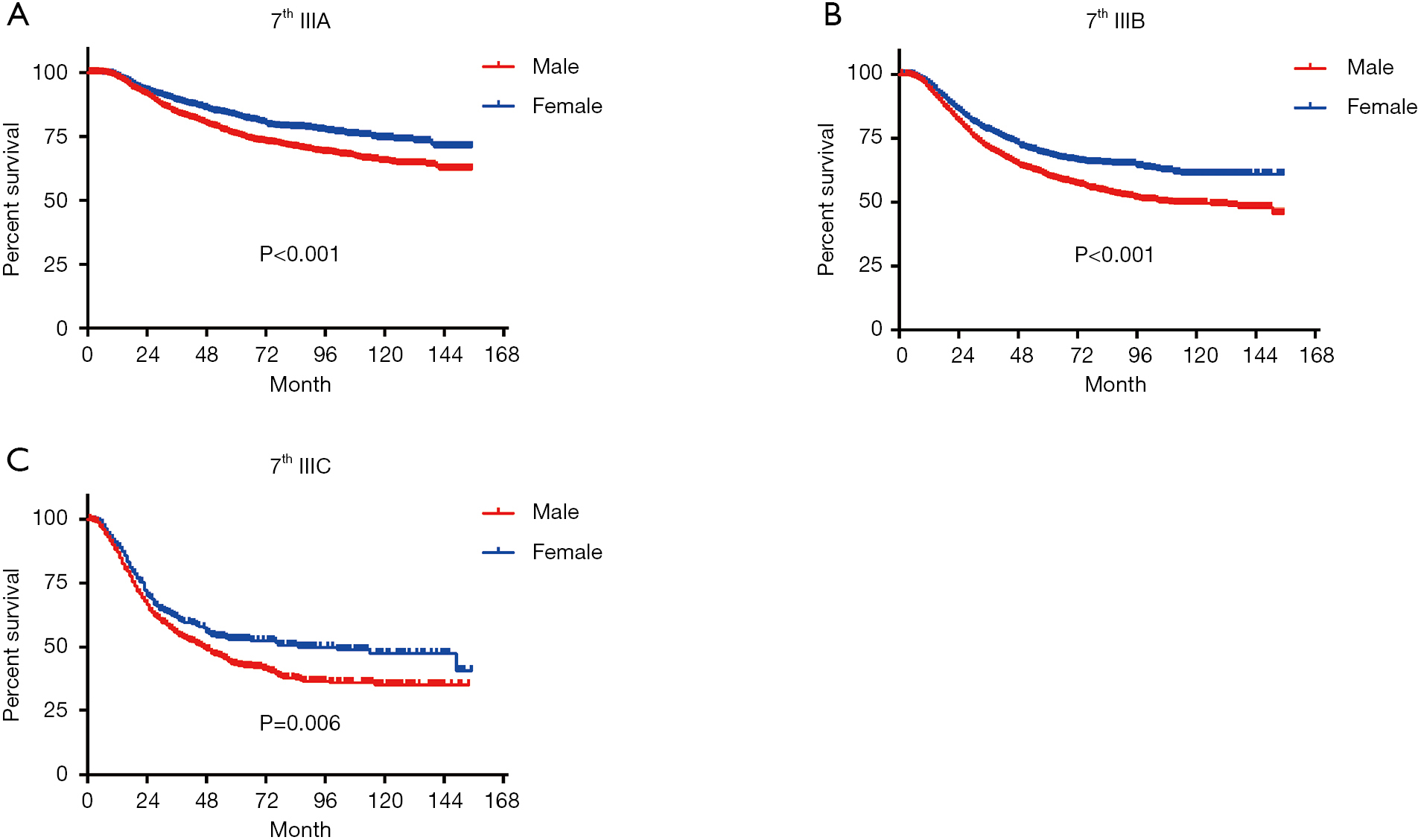 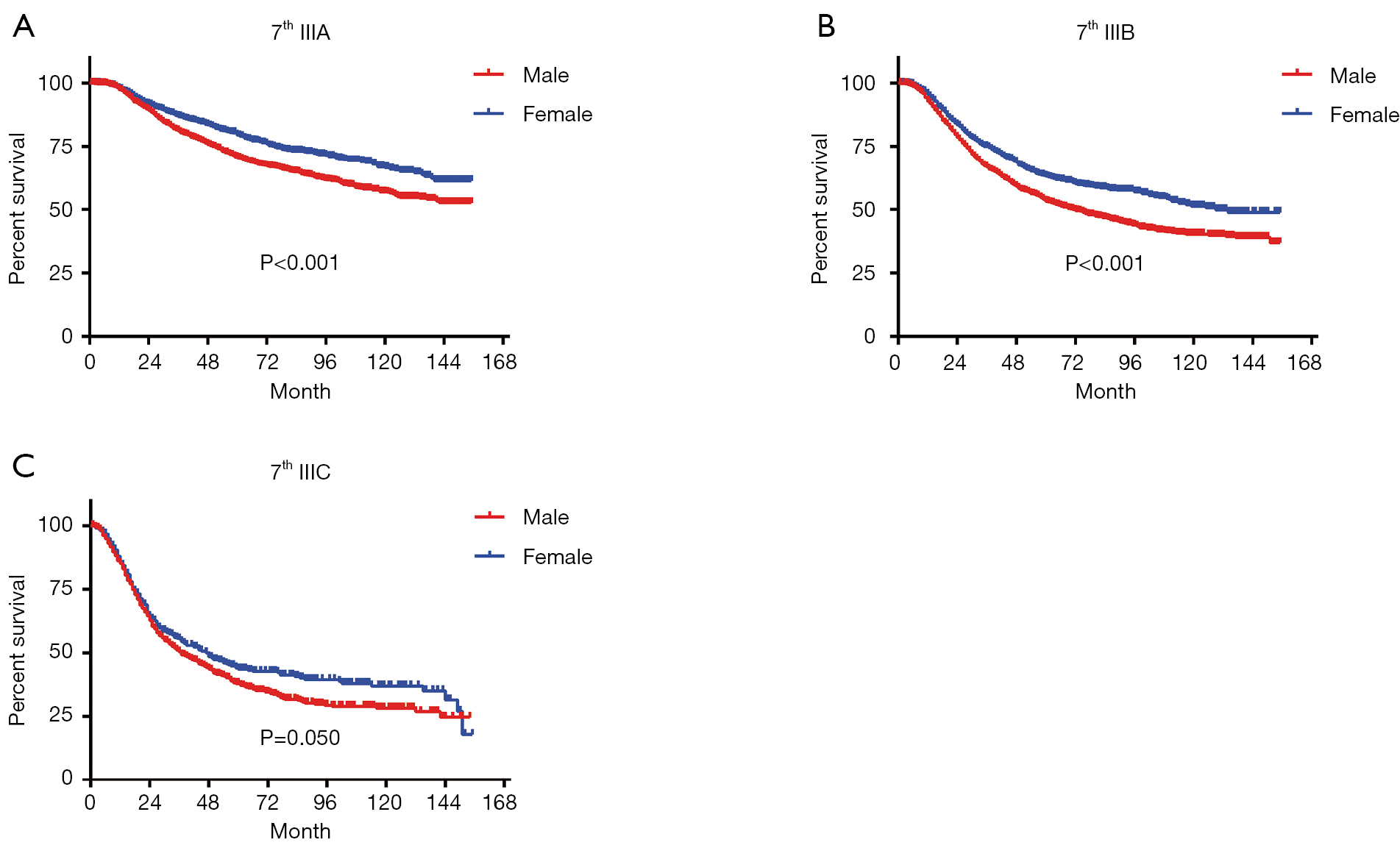 Figure 3 Long-term MSS based on the 7th edition of the TNM staging system. (A) Stage IIIA; (B) stage IIIB; (C) stage IIIC. 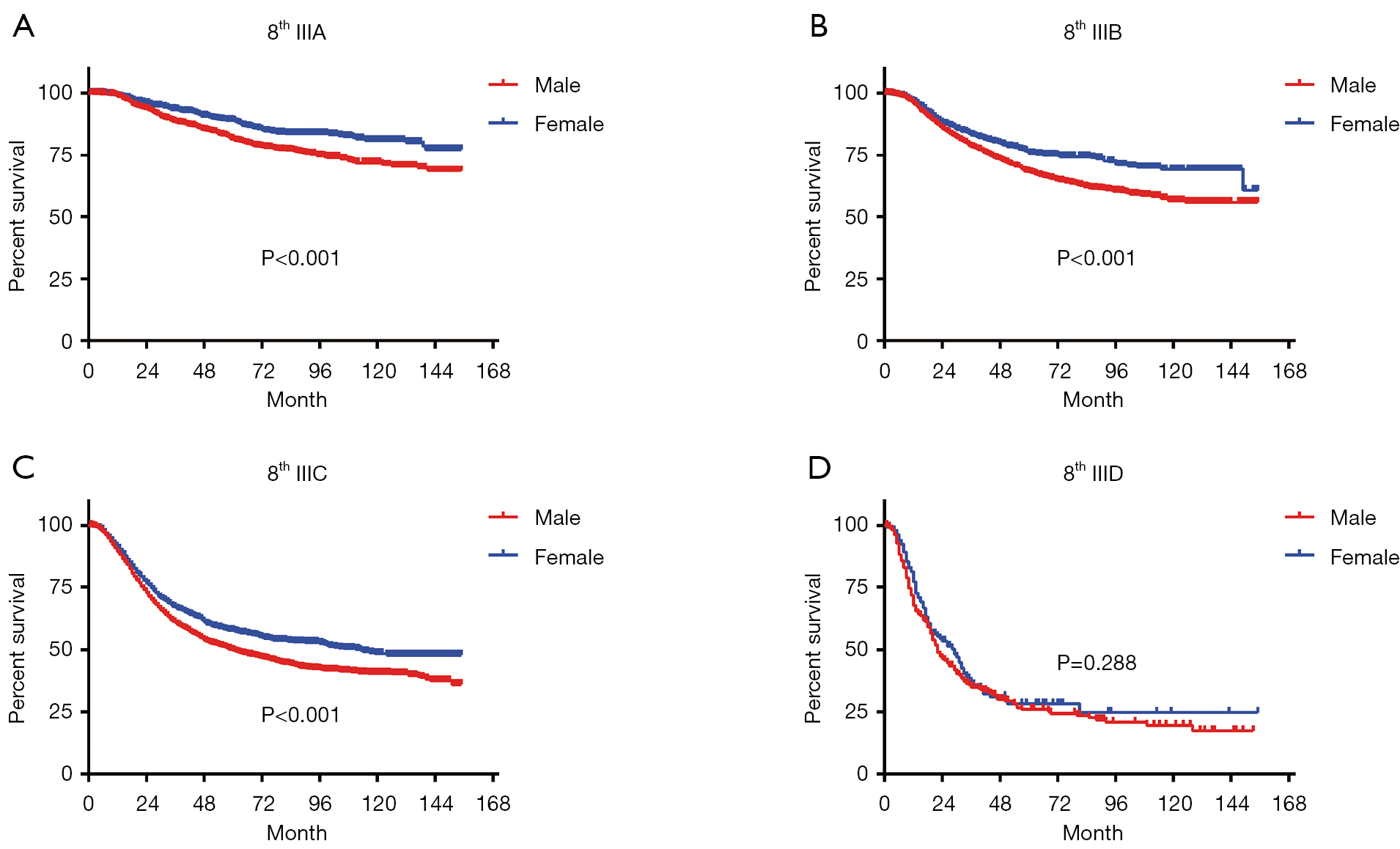 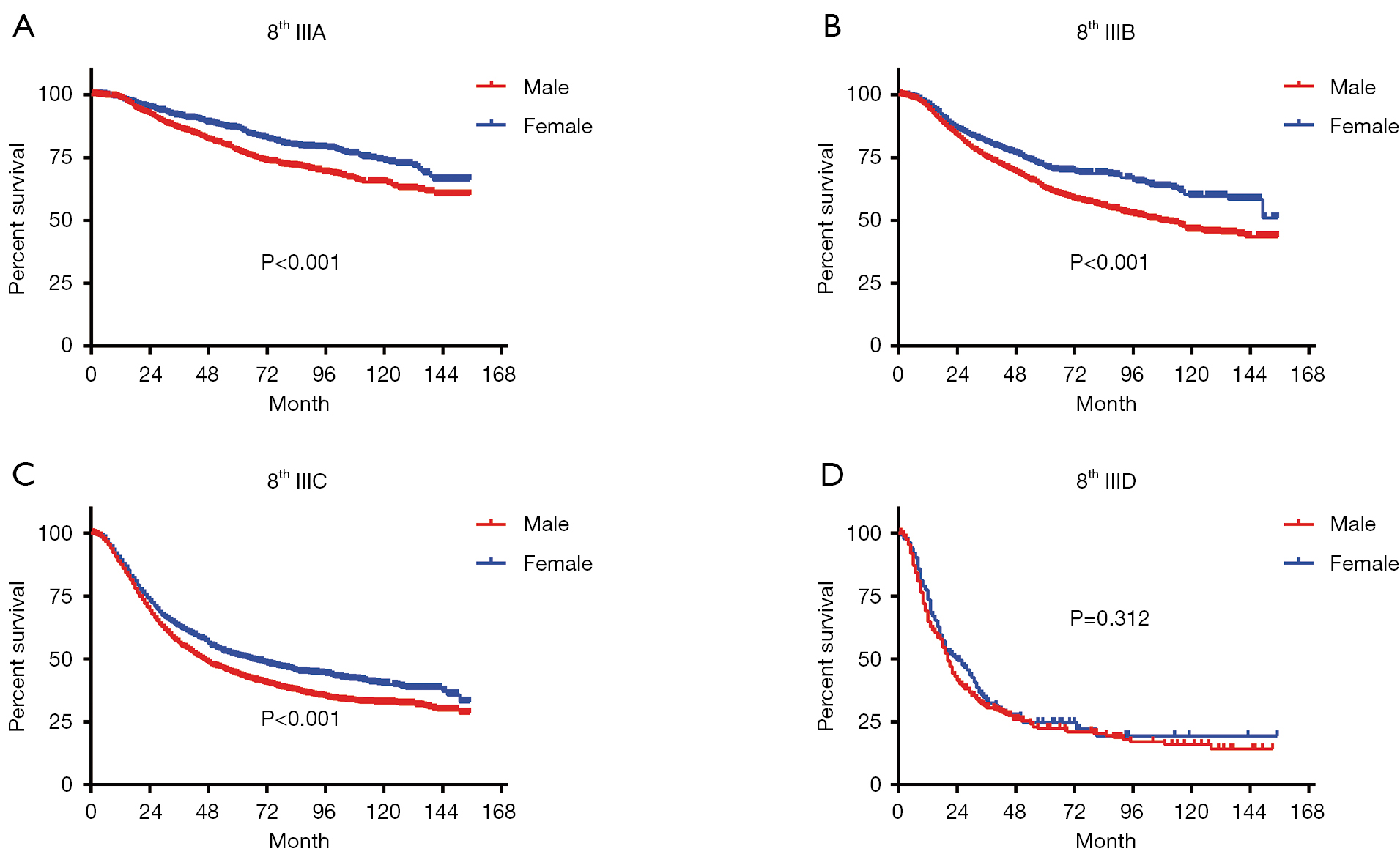 There was a significant difference in age between males and females with stage III disease but not among those with stage IIID disease. To verify whether age is related to survival, we further divided the patients into the following groups based on age: <55, 55–74 and ≥74 years. Cox analysis was performed in all groups. The results suggest that the risk of mortality in males is significantly higher than that in females in all age groups (P<0.001). In patients with stage IIID disease, there was no significant sex-specific difference in survival in any age group (Table 4).

Although the difference in survival between subgroups is very obvious in the 8th edition of the staging system, we observed a very interesting phenomenon. Among stage IIID patients, the survival advantage of female sex does not exist, which may be due to the combination of T4b + N3 in stage IIID disease (i.e., more lymph node metastasis and relatively advanced tumors). Hence, stage IIID patients experience a lower survival rate, which may affect the advantage of women (13). In patients with stages IIIA–IIIC disease, the tumor prognosis is better, making a sex-specific advantage more feasible. Therefore, males and females may have significantly different survival rates.

The higher female survival rates may be related to multiple factors. In this study, among patients with stage III disease, male patients were generally older; no such difference in age was observed in stage IIID patients. To verify whether the difference in survival was driven by age, we performed a Cox analysis of different age groups and found that the trend remained the same in each age group as in the entire group. The location of the disease may be one of the reasons for this observation. Some studies have found that the most common location of malignant melanoma in women is the lower limb, while that in men is the trunk. The surgical margins and external stresses differ in various parts of the body, which may lead to differences in prognosis (14-17). Our baseline data also confirm this distribution difference. Among all stage III patients, male patients had worse Breslow thickness and a higher ulceration rate, but no significant differences were observed in these factors between males and females with stage IIID disease. These factors were included as predictors of survival in melanoma patients according to the current 8th edition of the AJCC staging system. However, after adjusting for multiple factors, Cox analysis showed that there was still a significant difference in age between males and females among all patients with stage III disease but not among the subgroup of patients with stage IIID disease. On the other hand, some studies have suggested that women are more likely to apply sunscreen in their daily lives, thereby reducing their UV exposure, which is considered the most important environmental factor leading to skin melanoma and affecting prognosis (4,14,18). In addition, studies on stage I melanoma have found that only in the >60-year-old group is female sex associated with a higher survival rate (10). Moreover, pregnant women have better survival rates, possibly due to sex hormone secretion. However, there is no clear evidence to support this conjecture (19).

Genetics is also a potential factor affecting the survival advantage in females. Some studies have analyzed The Cancer Genome Atlas (TCGA) database and found that the missense mutation burden in males was significantly higher than that in females [median in males 298 vs. females 211.5; male to female ratio (M: F) =1.85, 95% CI: 1.44 to 2.39] (19). The link between the burden of missense mutations and the immune response may partially explain the survival advantages in females. Studies have found that inherited MC1R mutations at specific sites are associated with prolonged survival in females, whereas in males, these mutations do not affect survival (20). However, there are still few studies on the roles of genetics in sex-based differences, and there is no comprehensive theoretical basis.

In our study, a large number of samples were analyzed, and this real-world study provides information that more closely reflect the real situation than information obtained from RCTs, which use carefully selected patients populations. This study was performed to evaluate the sex-specific survival advantage, so we used Cox analysis and adjusted for multiple factors to ensure the reliability of the results.

There are also some limitations of our research. Although the overall sample size was very large, the number of patients with stage IIID disease was small, which may have affected the results. Although it is difficult to collect sufficient patient samples for some stages of disease, further large-scale controlled studies can still be expected to confirm this result.

Funding: This work was supported by the National Natural Science Foundation of China (grant number: 81800241), Postgraduate Research&Practice Innovation Program of Jiangsu Province (SJCX20_0484) and the Fundamental Research Funds for the Central Universities (14380479).

Reporting Checklist: The authors have completed the STROBE reporting checklist. Available at http://dx.doi.org/10.21037/atm-20-3332

Conflicts of Interest: All authors have completed the ICMJE uniform disclosure form (available at http://dx.doi.org/10.21037/atm-20-3332). Dr. Mo serves as an unpaid Section Editor of Annals of Translational Medicine from Jan 2020 to Dec 2020. The other authors have no conflicts of interest to declare.

Ethics Statement: The authors are accountable for all aspects of the work in ensuring that questions related to the accuracy or integrity of any part of the work are appropriately investigated and resolved. All procedures performed in studies involving human participants were in accordance with the ethical standards of the institutional and/or national research committee and with the 1964 Helsinki Declaration and its later amendments revised in 2013 or comparable ethical standards.