Chronic obstructive pulmonary disease (COPD) is a major public health problem. COPD, asthma and pneumonia are the third leading cause of death in the European Union (1) and the fourth common cause of death in North America with increasing prevalence and mortality rates (2). At least one third of the COPD cases is related to lung emphysema (3), which is characterized by permanent destructive enlargement of the distally located airspaces to the terminal bronchioles (4). Loss of elastic recoil, hyperinflation and obstruction of the expiratory airflow lead to an increased breathing work, which results in dyspnea during minimal physical activity of the patients (1).

For patients with advanced lung emphysema, lung volume reduction surgery (LVRS) represents an important and valuable therapy option leading to improvement of survival and exercise capacity. The National Emphysema Treatment Trial (NETT) resembles one of the most important milestones of LVRS. Over the last few decades significant improvement of the surgical technique was achieved. The current review will give an overview of the historical approaches for LVRS, highlight the indications for LVRS and discuss the development of the surgical approaches.

Since 1920 several surgical approaches to improve dyspnea in patients with severe emphysema were reported (5). The operations included thoracoplasty, ostochondrectomy, stabilization of the membranous trachea, phrenicectomy, glomectomy and lung denervation (6).

Otto Charles Brantigan (1904–1981) may be considered the pioneer of LVRS (5). In the early 50s Brantigan and co-workers performed resections and plications via thoracotomy to remove the destroyed emphysematous lung tissue, suggesting that by reducing overall lung volume, elastic traction on the small airways may be restored and consequently expiratory airway obstruction could be reduced (1). Of 89 patients with severe bilateral diffuse and bullous lung emphysema, which were evaluated for surgery, LVRS was performed in 56 patients, of which 14 were operated on bilaterally (7,8). A significant clinical improvement was observed in 75% of the patients (9). However, a high rate of early mortality (15–20%) was reported (5,10). The technique of Brantigan was discussed very critically at that time. Edward Arnold Gaensler (1921–2012) was one of the most renowned physicians in the field of pulmonary physiology at that time. He stated ironically: “it was difficult to believe that a disease characterized by diffuse loss of lung parenchyma could be effectively treated by resection of functioning lung” (5). Taking the high early mortality of the procedure together with the general scepsis towards this concept in account, no more intensive work in the field of LVRS was reported, until Joel David Cooper revived the concept of Brantigan and reported the results of bilateral pneumectomy (resection of breath or air = volume reduction) in 20 patients with severe COPD (11). This can be considered the birth hour of the modern LVRS era.

It is important to distinguish between bullectomy and LVRS. Patients with giant bullae occupying more the one third of the hemithorax (vanishing lung syndrome) show a significant improvement of the lung function, when bullectomy is performed. By resecting these space-occupying large bullae, decompression of the adjacent lung tissue is achieved and consequently the lung function improves (1,12). This concept was already well established long before Brantigan and Co-workers describe the concept of LVRS in patients with diffuse lung emphysema, which was later revived and refined by Cooper.

The NETT may be considered as one of the most important milestones of modern LVRS (13). This prospective randomized, controlled, multicenter trial investigated long-term effects of LVRS compared to optimal medical therapy regarding survival, exercise capacity, quality of life, lung function and patient symptoms (14). Between January 1998 and July 2002, a total of 1218 patients were randomized either to LVRS or medical therapy and observed for a mean of 2.4 years (13,15). In patients with upper lobe dominant emphysema and reduced baseline exercise capacity a significant improvement of survival, lung function, exercise capacity, dyspnea and quality of life was reported (13). During the trial, a subgroup defined by forced expiratory volume in 1 second (FEV1) less than or equal to 20% predicted and either a diffusing capacity for carbon monoxide (DLCO) less than or equal to 20% predicted or homogeneous emphysema demonstrated a 30-day mortality of 16% after LVRS compared to medical therapy (P=0.001) (16). The surviving patients in this group after LVRS showed no relevant clinical improvements in lung function, exercise capacity, or quality of life (14).

The NETT results led to more caution and some scepsis towards LVRS. Between 2003 and 2011, only 538 patients underwent LVRS according to the Society of Thoracic Surgeon’s (STS) database (3). The indication for LVRS was limited to patients with upper lobe dominant heterogenous emphysema and several single center trials reported excellent results and long lasting improvement of lung function, quality of life and exercise capacity (17-21).

Experienced centers performing LVRS reported positive effects of the procedure in a wider spectrum of indications.

However, in well-selected patients with homogenous emphysema, LVRS shows positive effects. Weder et al. reported long-lasting and significant improvement of lung function and reduction of dyspnea measured by the medical research council dyspnea score (MRCDS) in 138 patients with homogenous emphysema (22). The crucial criteria in selecting these patients for LVRS is severe hyperinflation with a residual volume to total lung capacity ratio (RV/TLC) greater than 60% and FEV-1% and DLCO% both above 20% predicted (23).

In patients with heterogenous emphysema and a severely impaired diffusion capacity (DLCO <20% predicted), LVRS may be beneficial. By resecting the non-functioning lung tissue, gas exchange should not be impaired, but hyperinflation is reduced, and improvement of the lung function may occur. Beneficial effects of LVRS in patients with heterogenous emphysema and a DLCO <20% predicted were already reported by Ciccone (21) and Caviezel (24). In both cohorts perioperative mortality was 0%.

Pulmonary hypertension represented an absolute contraindication for LVRS in the NETT and other trials (23). However, improvement of lung function, dyspnea and even pulmonary hemodynamics were reported, when non-perfused tissue is removed in patients with prominently heterogenous emphysema (26).

Patients with alpha-1-antitrypsin-deficiency (AATD) represent a special subgroup of emphysema. In the NETT, a total of 10 patients with AATD underwent LVRS (27). Although improvement of lung function and exercise capacity are achieved, durability of these beneficial effect is shorts in patients with AATD is shorter compared with patients without AATD after LVRS. Similar results were reported by the Zurich group (23) and are also discussed elsewhere in this issue.

Evolution of the surgical approach for LVRS

In the NETT, median sternotomy was performed in 406 of 580 patients (70%) undergoing LVRS (14). Median sternotomy offers excellent exposure to both lungs especially to the anterior upper lobes without interfering with the chest wall muscles. Furthermore, no painful intercostal nerve damage is present, especially when chest tubes are placed under the rib cage. However, exposure to the lower lobes, especially on the left side, is impaired.

Muscle-sparing thoracotomy offers excellent exposure to the lower lobes and is performed by several surgeons in case of massive adhesions. However, this approach is not suitable for bilateral simultaneous procedures. Moreover, thoracotomy, even the muscle-sparing approach, still interferes with the chest wall muscle and should therefore not be considered for these critically ill patients.

Uniportal VATS (uVATS) represents the latest development of minimally invasive thoracic surgery and is gaining more popularity and acceptance over the last few years (29-31). Through a single-incision of 3–4 cm, the whole thoracic cavity is reached and complex procedures, including vascular and bronchial sleeve resections may be performed. This approach is associated with even less postoperative pain than multiport VATS and allows for quick postoperative recovery.

In our institution, LVRS is performed by uniportal VATS. In patients with bilateral emphysema, a unilateral two-staged approach is favorized. Lately, we started to perform LVRS by uniportal subcostal VATS. Through a 4 cm incision placed below the rib cage, the hemithorax is accessed and LVRS may be safely performed (Figures 1-4). By avoiding the intercostal placement of the incision, less postoperative pain is observed, and patients show excellent and quick recovery from the procedure. 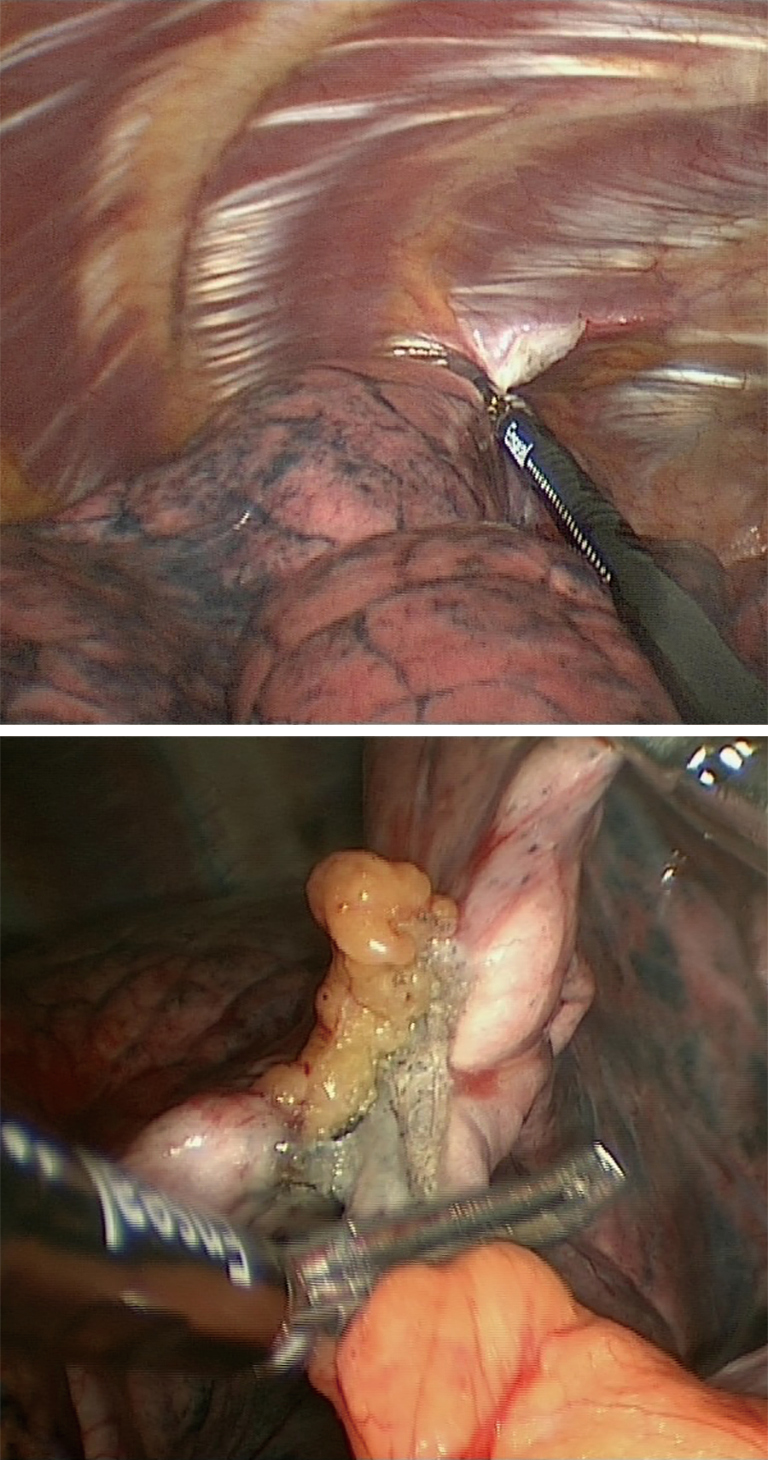 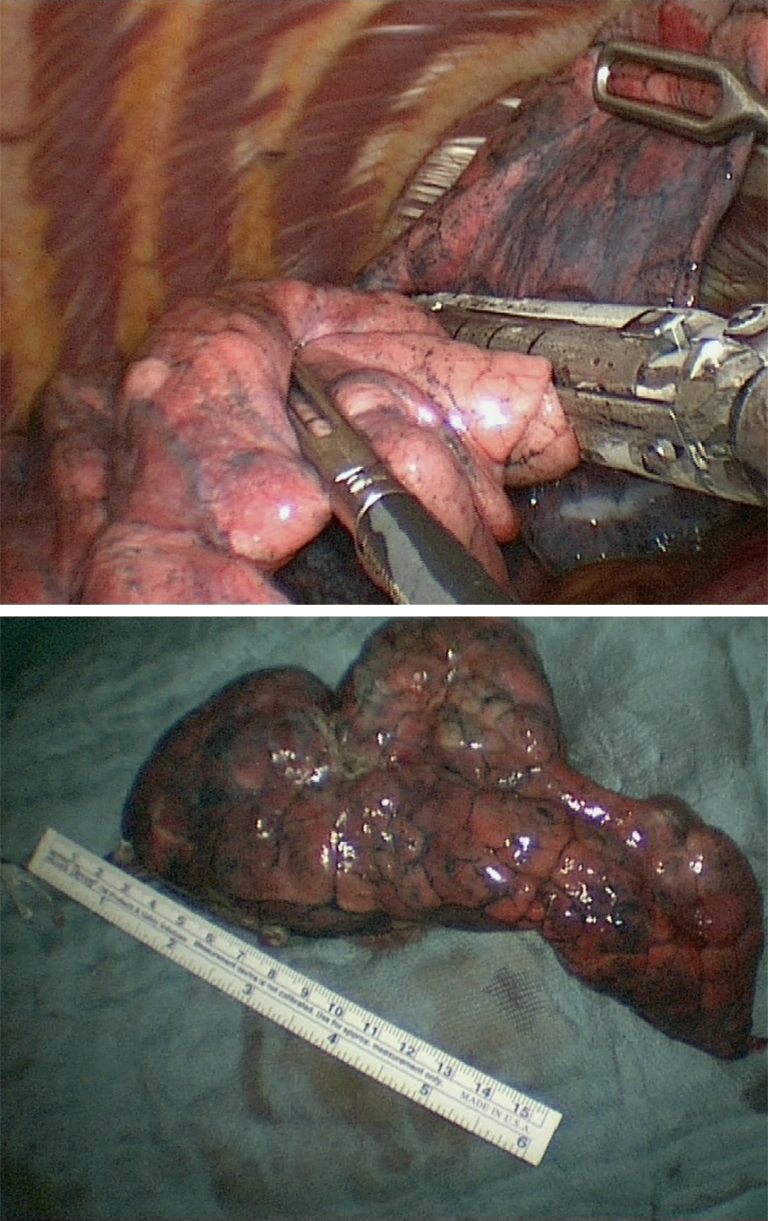 Figure 2 Resection of the emphysematous lung tissue from the right upper lobe. 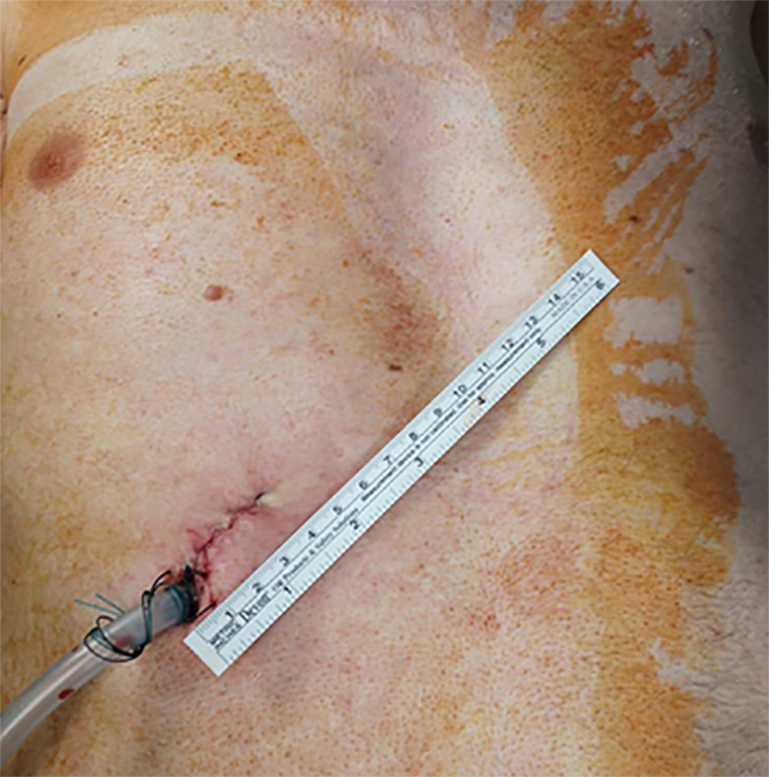 Figure 3 Subcostal incision with the chest tube inserted through the incision.

A further development of the minimally invasive approach is non-intubated awake VATS (NIVATS).

In 2006, Mineo and co-workers published their experience of awake non-resectional lung volume reduction under thoracic epidural anesthesia in 11 patients (32). By using a “no-knife” endostapler, emphysematous target zones are plicated. A faster recovery and satisfactory 6-month outcome compared to resectional LVRS was observed.

LVRS is a safe and feasible treatment option in patients with lung emphysema. Careful patient selection is essential to achieve optimal clinical benefit even in patients beyond the classical LVRS indications as in the NETT.

Evolution of the surgical technique and the perioperative management including awake surgery allows for faster recovery of the patients without compromising the functional outcome.

Provenance and Peer Review: This article was commissioned by the editorial office, Annals of Translational Medicine for the series “Lung Emphysema”. The article has undergone external peer review.

Conflicts of Interest: All authors have completed the ICMJE uniform disclosure form (available at http://dx.doi.org/10.21037/atm-20-6430). The series “Lung Emphysema” was commissioned by the editorial office without any funding or sponsorship. BR served as the unpaid Guest Editor of the series and serves as an unpaid editorial board member of Annals of Translational Medicine from Oct 2019 to Sep 2021. The authors have no other conflicts of interest to declare.