Recurrence of soft tissue neoplasms (STN) is commonly seen in daily practice (1), especially in sarcomas and some intermediate STN. About 1/3 sarcomas will recur (2). The average 5-year survival rate is 52–60% (1,3). The probability of resection declines dramatically along with the times of recurrences (2). There is only a 10% chance of resection for the third time recurrence. Therefore, it is pivotal to detect RSTN early and non-invasively.

The value of conventional MR in the assessment of STN was well-established (4-8). Conventional MR mainly focused on the T1 and T2 relaxation differences, and morphologic/anatomic appraisal. The diagnostic specificity was not high. A series of changes after surgery (scars, hematoma, inflammatory granuloma, and fibrosis), were also difficult to distinguish from recurrence (9). Lee et al. (10) found that conventional MR features based nomograms can predict the probability of malignancy. Inflammation or post-operative fibrosis may mimic a nodule or mass. Functional MR can serve as a useful complement for differentiation (11). Combined with conventional MR, and diffusion-weighted imaging (DWI) imaging with apparent diffusion coefficient (ADC) mapping, a specificity of 97% can be reached for benign and malignant differentiation.

Intravoxel incoherent motion (IVIM) was first reported by Le Bihan et al. (12), by employing a bi-exponential decay model to depict the water molecules diffusion phenomenon (13-18). The ADC value was affected by microcirculation (capillary network) at lower b-values (≤200 s/mm2). The pseudodiffusion coefficient (D*) value was named to assess the diffusion induced by microvascular perfusion, and it was thought much higher than the true diffusion coefficient (D) value (13). D* and perfusion fraction (f) values were correlated well with microvessel density of colorectal cancer animal models, and IVIM parameters were also correlated with cerebral blood volume in gliomas (13,19,20).

We intended to explore the feasibility of IVIM and DKI in the differentiation of recurrent soft tissue neoplasms (RSTN) and post-surgery changes (PSC), and compare them with mono-exponential decay diffusion-weighted imaging (DWI). Mono- exponential, bi-exponential, and non-Gaussian distribution based predictive models for differentiation of RSTN and PSC were also built and compared. We present the following article in accordance with the STARD 2015 reporting checklist (available at http://dx.doi.org/10.21037/atm-20-2025).

The study was conducted in accordance with the Declaration of Helsinki (as revised in 2013). The study was approved by the institutional ethics board of Fudan University Shanghai Cancer Center and informed consent of this prospective study was waived. Totally, the clinical, IVIM and DKI imaging of a cohort of 27 patients [15 RSTN (22 masses), and 12 PSC (12 lesions)] with 34 masses, from Nov 01 2017 to Sep 30 2018, were reviewed.

Inclusion criteria: (I) all patients with complete clinical history; (II) all the masses were histologically-proven by surgery or fine-needle aspiration biopsy. Sixteen cases were excluded for unproven by histology. Twenty-seven cases (34 masses) were histologically-proven and included. They were divided into RSTN and PSC groups, 15 cases (22 masses) were recurrences and 12 cases (12 lesions) were PSC.

Their clinical data were reviewed, including the age of onset, gender, locations (head and neck region, trunk, and extremity), and histology of primary tumors.

The scan parameters of conventional MR and DWI (mono-exponential, bi-exponential and non-gaussian distribution)

MR Body Diffusion Toolbox (www.siemens.com/syngo.via-frontier) was used for post-processing. Noise reduction and distortion correction of DWI was done. Mono-exponential and bi-exponential decay curves were generated respectively, by employing nine b values (0, 20, 40, 60, 100, 150, 200, 500 and 800 s/mm2). And mono-exponential and non-Gaussian distribution models were employed to generate decay curves, by employing five b values (0, 100, 700, 1,400 and 2,100 s/mm2).

SPSS 20.0 and MedCalc software were employed for data analysis. Kolmogorov-Smirnov test was used for the normality test. The intra-class correlation coefficient (ICC) was employed for repeatability of IVIM (ADC_IVIM, D, D*, f) and DKI (ADC_DKI, MK, and MD) values. Independent student’ t-tests or Mann-Whitney U tests were used to compare differences between recurrence and PSC (P<0.05). Receiver characteristic operator (ROC) curves were generated, and the cut-off values were determined by ROC analysis (MedCalc software). Logistic regression was employed to build predictive models. DeLong test was employed to compare different ROC curves, the level of α was set at 0.05 divided by the number of comparisons (P<0.05/3) (28).

The gender ratio (female:male) was 16:11. The age ranged from 26 to 82 years old, and the median age was 58 years old. Eleven cases arose in extremities, 13 in the trunk (3 in retroperitoneum), and 3 in the head and neck region.

There were 15 histologically proven RSTN with 22 masses. Three liposarcomas (2 dedifferentiated, 1 myxoid), 3 spindle cell sarcomas, 3 fibrosarcomas, 2 synovial sarcomas, 1 malignant peripheral never sheath tumor, 1 epithelioid sarcoma, 1 pleomorphic undifferentiated sarcoma, and 1 angiosarcoma were enrolled. Five of them were found with metastases, 4 in the lung (1 coexisted with liver metastasis), and 1 in the bone.

The comparisons of DWI and IVIM, DWI, and DKI parameters between recurrences and PSC

The repeatability of DWI/IVIM/DKI parameters was high. The ICCs were all ≥0.841. 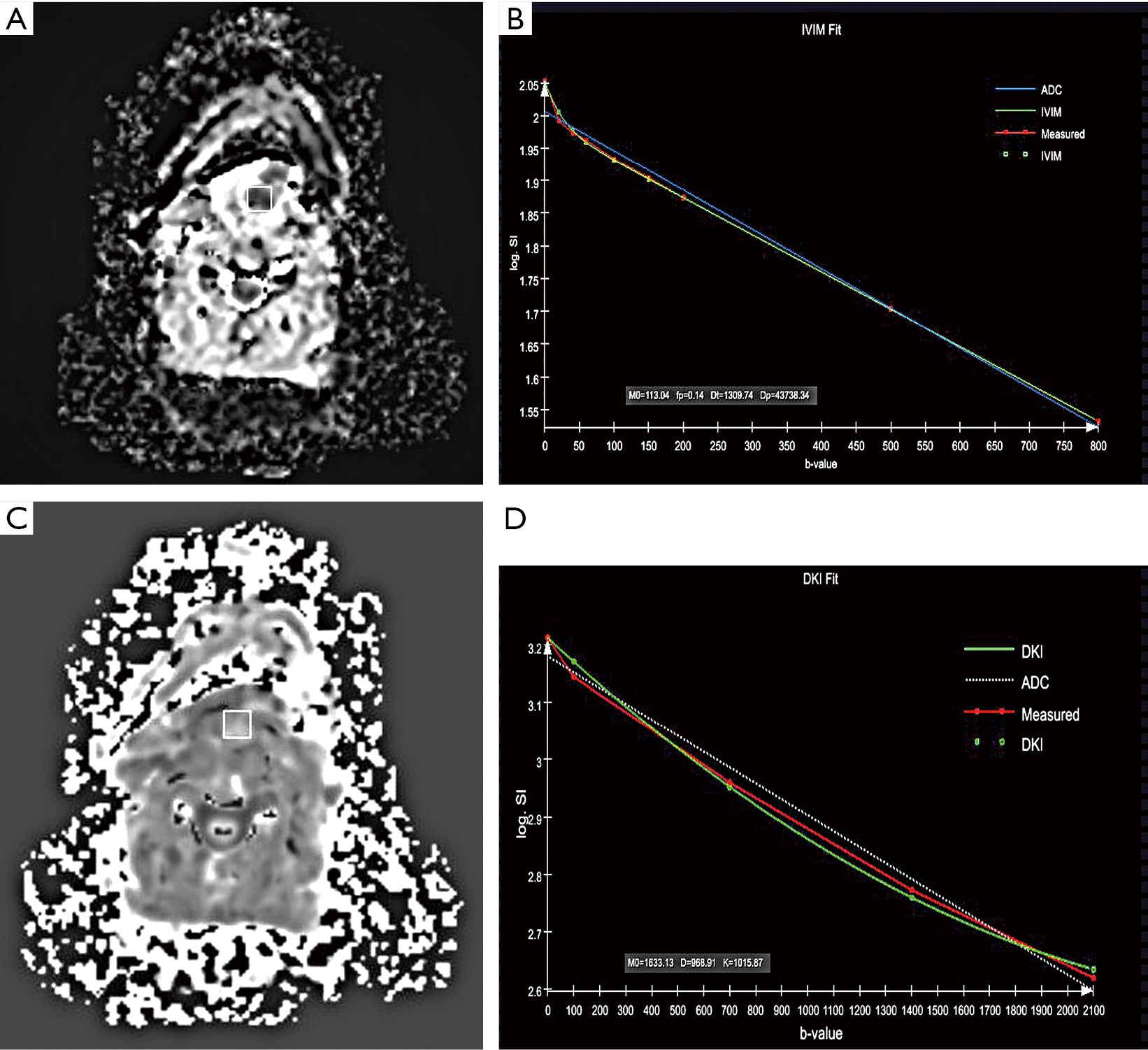 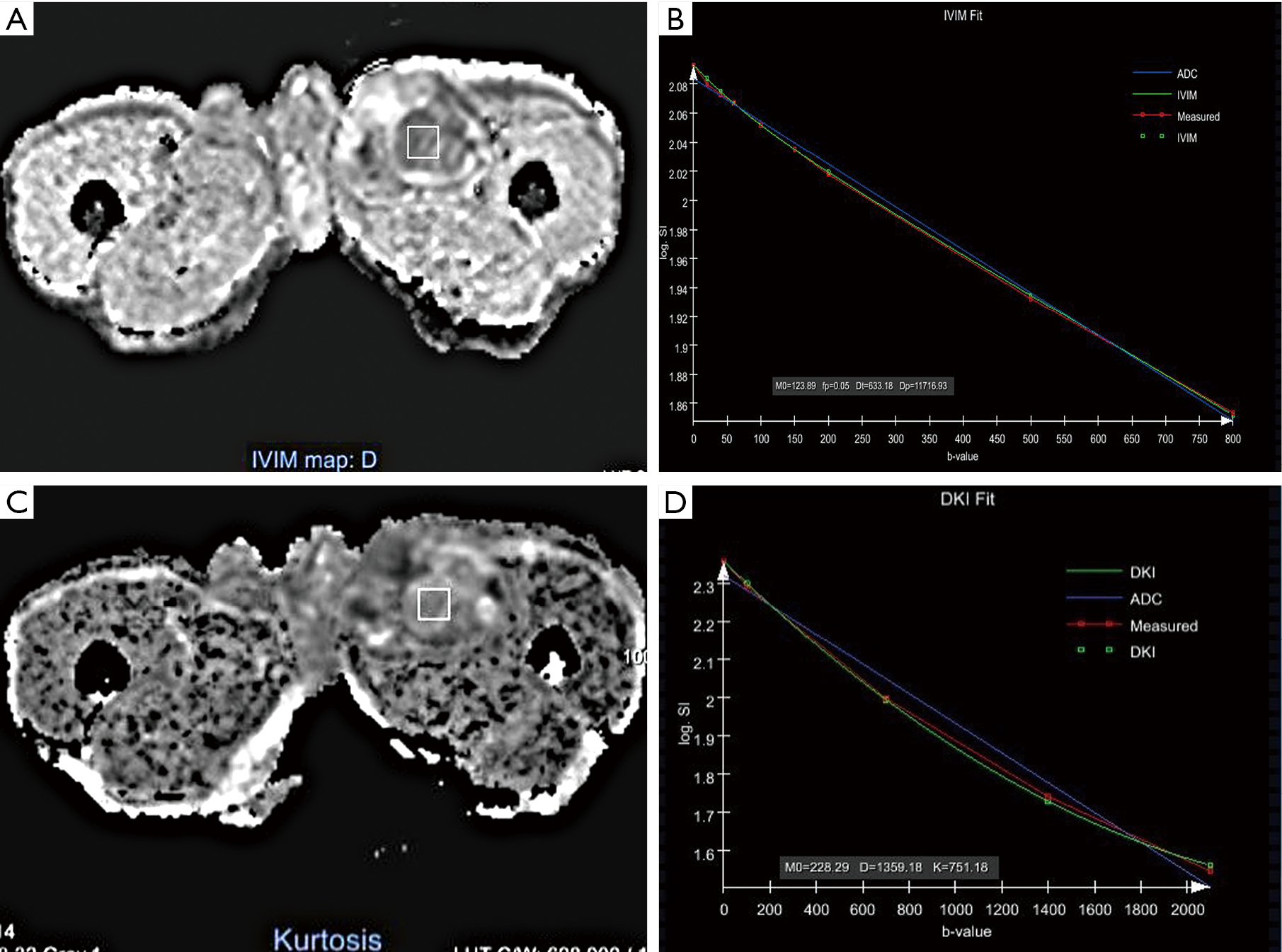 Table 1 The differences of DWI, IVIM, and DKI quantitative parameters between recurrence and PSC
Full table 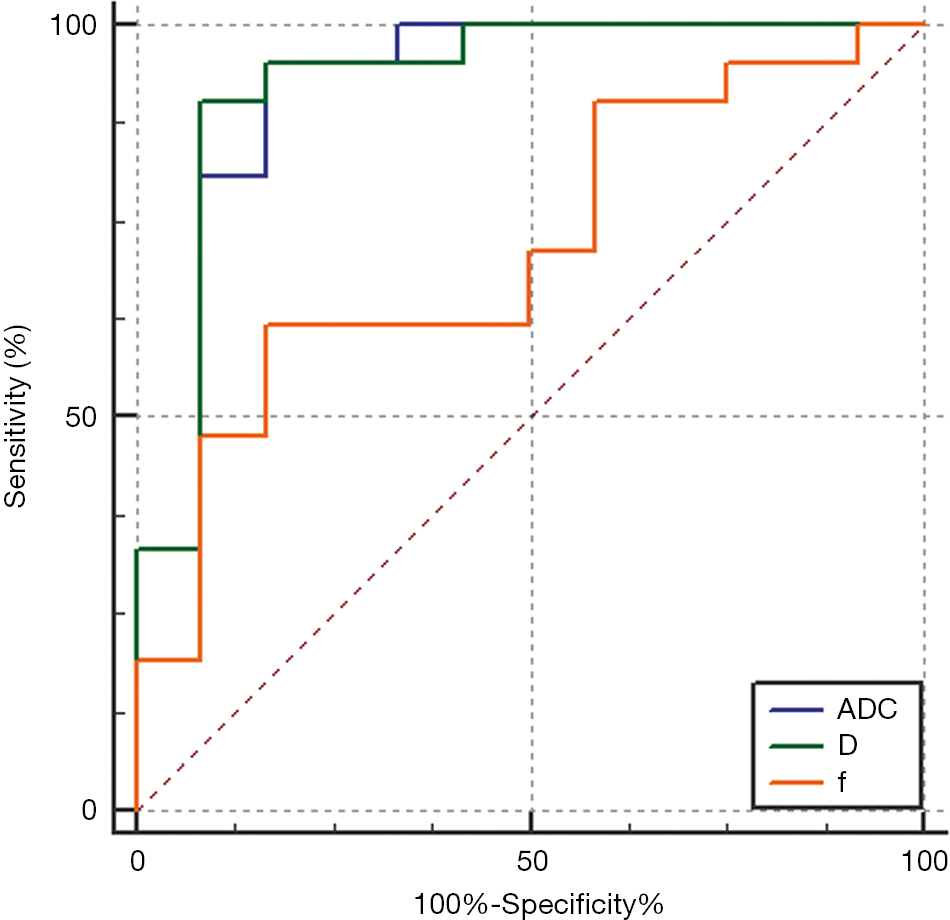 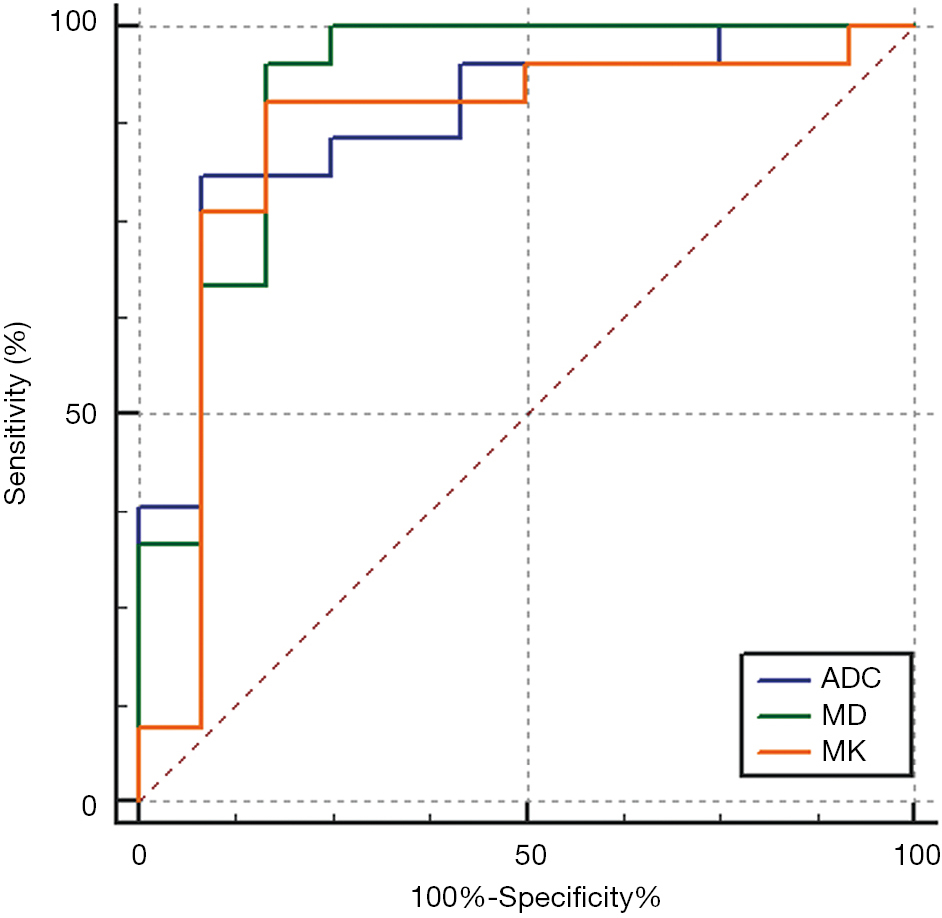 The comparisons of AUC between mono- and bi-exponential, and mono-exponential and non-Gaussian distribution based predictive models

The quantitative parameters of recurrence and PSC demonstrated great repeatability (29). The ADC, D, f, MD, and MK values of recurrence were lower than those of PSC. The ADC_IVIM and D values performed better than f value in differentiation. No differences were found among AUCs of ADC_DKI, MD, and MK values. The AUCs didn’t show significant differences between bi- and mono-exponential decay, and between mono-exponential decay and non-Gaussian distribution based predictive models. IVIM and DKI were useful in the differentiation of RSTN and PSC.

Diffusion-weighted imaging depicted the movement of water molecules at the microscopic level, and the interpretation of the DWI evolved from the mono-exponential decay to the bi-exponential decay and non-Gaussian distribution model (5,9,12,23-25). Mono-exponential decay DWI has been used for the characterization of recurrence and PSC by other researchers (9,11,30). Similar to their findings, there were significant differences in ADC values between recurrence and PSC, although the ADC value of recurrence and PSC can be overlapped. Qi et al. found that the ADC, D, and f values of benign lymph node were higher than those of malignant ones, and the specificity and accuracy were improved remarkably when combining the D and f values (15). The ADC value was affected remarkably by microvascular perfusion at lower b value (≤200 s/mm2). To explore the microvessel perfusion of RSTN and PSC, 7 of 9 b values we exploited were lower than 200 s/mm2. We found that the bi-exponential decay model fitted better with measured values than the mono-exponential model, additionally, it can provide more quantitative values for differentiation. D and f values can be used in differentiation. The D value of recurrence was lower that of PSC, we speculated it may due to their higher cellular density. Although the AUC of D value was slightly higher than that of ADC value, without significant difference. We also found that the f value of recurrence was smaller than that of PSC (non-tumor tissue). Although its diagnostic performance was not as high as that of D value, f value can serve as another valuable quantitative feature for differentiation.

DKI was employed to depict the non-Gaussian distribution of water molecules (21,22). The reported b value that was employed sometimes exceeds 3,000 s/mm2 and can be as high as 20,000 s/mm2. K value, as a dimensionless value, can quantitatively describe the degree of non-Gaussian distribution. DKI could provide more subtle information than DTI (21,22), which was used in brain tumors, Parkinson’s disease, and breast tumors (22,23,31,32). We used five b values to depict the curve of non-Gaussian distribution. Three of them were higher than 1,000 s/mm2. We found that ADC, MD, and MK values were helpful in the differentiation of RSTN and PSC. The ADC and MD values of recurrence were lower than those of PSC, but it had higher MK values. We speculated two main reasons for these results. One reason was the heterogeneity of tumor pathology types included, and the other was that recurrences of STN had more complicated microstructure, and showed notable heterogeneity. The AUC of ADC, MD, and MK values in differentiation were 0.877, 0.913, and 0.853 respectively, and there were no significant differences among them.

IVIM and DKI worked in different b-values, and they reflected different tissue properties (12,13,15,22,23). The D* and f values of IVIM reflected the status of microvascular perfusion and diffusion. Whereas the k value was an indicator of evaluation of diffusion with non-Gaussian distribution and indirectly reflected the heterogeneity. In this research, we did not compare the differences in the values of these two methods.

Several limitations should be mentioned. Foremost, the sample size was small. Secondly, we drew ROIs on the greatest axial slice (with most tumor pixels). Although we measured twice at a one-month interval and documented the mean value, the selection bias cannot be avoided. Lastly, the PSC was complex, including hematoma, inflammatory granuloma, scar tissue, and fibrosis and so on, the differences between these changes and recurrence should be explored further.

Conflicts of Interest: All authors have completed the ICMJE uniform disclosure form (available at http://dx.doi.org/10.21037/atm-20-2025). The authors have no conflicts of interest to declare.

Ethical Statement: The authors are accountable for all aspects of the work in ensuring that questions related to the accuracy or integrity of any part of the work are appropriately investigated and resolved. The study was conducted in accordance with the Declaration of Helsinki (as revised in 2013). The study was approved by the institutional ethics board of Fudan University Shanghai Cancer Center (No.: 1310128-1) and informed consent of this prospective study was waived.