Crohn’s disease (CD) is a chronic inflammatory condition of the gastrointestinal tract that mainly affects the terminal ileum. According to the Montreal classification based on the anatomical location, CD is divided into the ileal (L1), colonic (L2), ileocolonic (L3) and upper gastrointestinal (L4) phenotypes (1,2). Recent studies show that the L4 subgroup is heterogeneous in terms of clinical characteristics and prognosis. Although there is no clinical consensus at present, L4 can be further classified into the proximal ileal, jejunal and esophago-gastroduodenal (EGD) subtypes (3-7). The L4-jejunal and L4-proximal ileal disease indicates a higher risk of intestinal surgery, a more aggressive disease and worse prognosis. For instance, jejunal involvement predicts stricturing and multiple abdominal surgeries (4,6,7). However, the nutritional status of the L4 and non-L4 patients, including weight, body mass index (BMI), albumin levels, diet and others, has not been compared. This is relevant since 85% of the CD patients awaiting surgery are malnourished due to improper dietary intake and resorption (8-11). Therefore, it is essential to identify the nutritional factors affecting the different phenotypes in order to individualize disease management and therapy.

The aim of this study was to evaluate the clinical characteristics and underlying nutritional factors of L4 CD phenotype and its subgroups at diagnosis, and identify the correlations. We conducted a retrospective study in accordance with the STROBE reporting checklist (available at http://dx.doi.org/10.21037/atm-20-2212).

A retrospective study was conducted on patients diagnosed with CD between January 2013 and December 2019 at the Xiangya Hospital Central South University. The inclusion criteria were as follows: (I) initial diagnosis of CD, (II) availability of gastroscopy, ileocolonoscopy, double-balloon enteroscopy or capsule endoscopy and imaging (computer tomography, or magnetic resonance imaging) data, and (III) availability of the complete operation reports in case of diagnosis via surgery. Patients with indeterminate colitis, ulcerative colitis, intestinal tuberculosis, Ischemic enteropathy, infective enterocolitis, Schistosoma, amebic enteropathy or Behcet disease, younger than 14 years or older than 75 years, and positive for Helicobacter pylori infection as per 13C-urea breath test were excluded. Disease location was established by a gastroenterologist, who also classified the patients into L1-L4 types, and further into the L4 subtypes as described above (Figure S1). The study was conducted in accordance with the Declaration of Helsinki (as revised in 2013), and the study approved by the Ethical Committee of the Xiangya Hospital of Central South University (No. 201912457), and informed consent was taken from all the patients.

L4-EGD was defined as the presence of EGD lesions with/without any other gastrointestinal lesions. L4-jejunal was defined as jejunal but no EGD involvement, and L4-proximal ileal subtype included patients with proximal ileal involvement without that of jejunal or EGD. Disease behavior was defined based on the findings of endoscopy, imageology or surgical specimens. Disease course was defined as time from onset to diagnosis. Perianal complications included perianal fistula, abscess and fissure. The CDAI scores were also evaluated during diagnosis, and CDAI score ≥150 was considered as the active disease state. All complications were recorded during hospitalization before diagnosis. History of surgery was defined as (I) hospital admission due to acute abdominal pain and CD diagnosis during/after operation or (II) CD diagnosis and operation during hospitalization (excluding fistulization).

Univariate analyses were performed to compare L4 (and each subtype) and non-L4 patients. All categorical variables were analyzed by the chi-square test, the student t-test was used for normally distributed variables and the Mann-Whitney U test was used for non-normally distributed variables. P value <0.05 was considered statistically significant. Random forest technique with python (version 3.8.0) was used for multivariate analysis of the variables that were statistically significant as per univariate analysis. The predictive value of each factor was determined using the “feature_importances” function in the python sklearn package. The metric mean decrease Gini (MDG) was calculated to quantify the contribution of the different factors; higher MDG indicates greater importance. To assess whether a variable increased or decreased the risk for L4, odds ratios (OR) and 95% confidence intervals (CI) were estimated using logistic regression.

The medical records of 869 patients were collected (Figure S1). The characteristics of the remaining 869 patients are summarized in Table 1. The median disease course was 12 months, and the mean age at onset was 31.6 years. In addition, the median body weight and mean serum albumin levels were 52 kg and 33.89 g/L respectively. Furthermore, 201 patients were smokers, and three-fourths of the cohort (659; 75.83%) consisted of males. In terms of disease location, only 14 patients had L1 lesions, 130 had L2 lesions, and about a quarter had L3 lesions. More than half the patients (59.72%) had L4 lesions, including 335 with proximal ileal, 158 with jejunal and 26 with EGD lesions (Table 2). In addition, 57.54% of the patients exhibited complications like stricturing and/or invasive disease, and perianal lesions (perianal fistula, abscess, and fissure) were seen in 29.46% of the patients. Finally, about one-tenth (11.05%) of the patients developed fever during the hospitalization, and 26.47% underwent abdominal surgery during hospitalization. 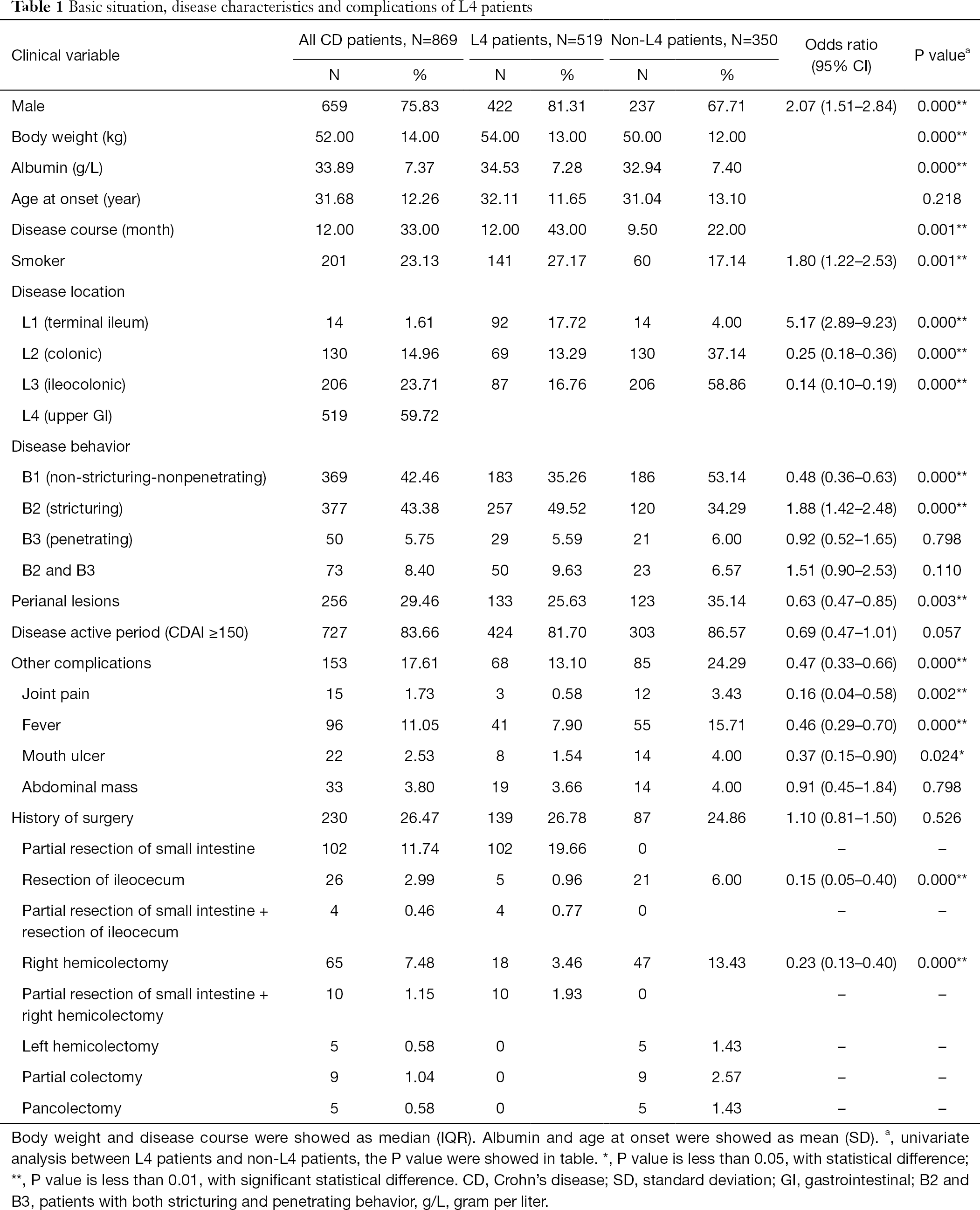 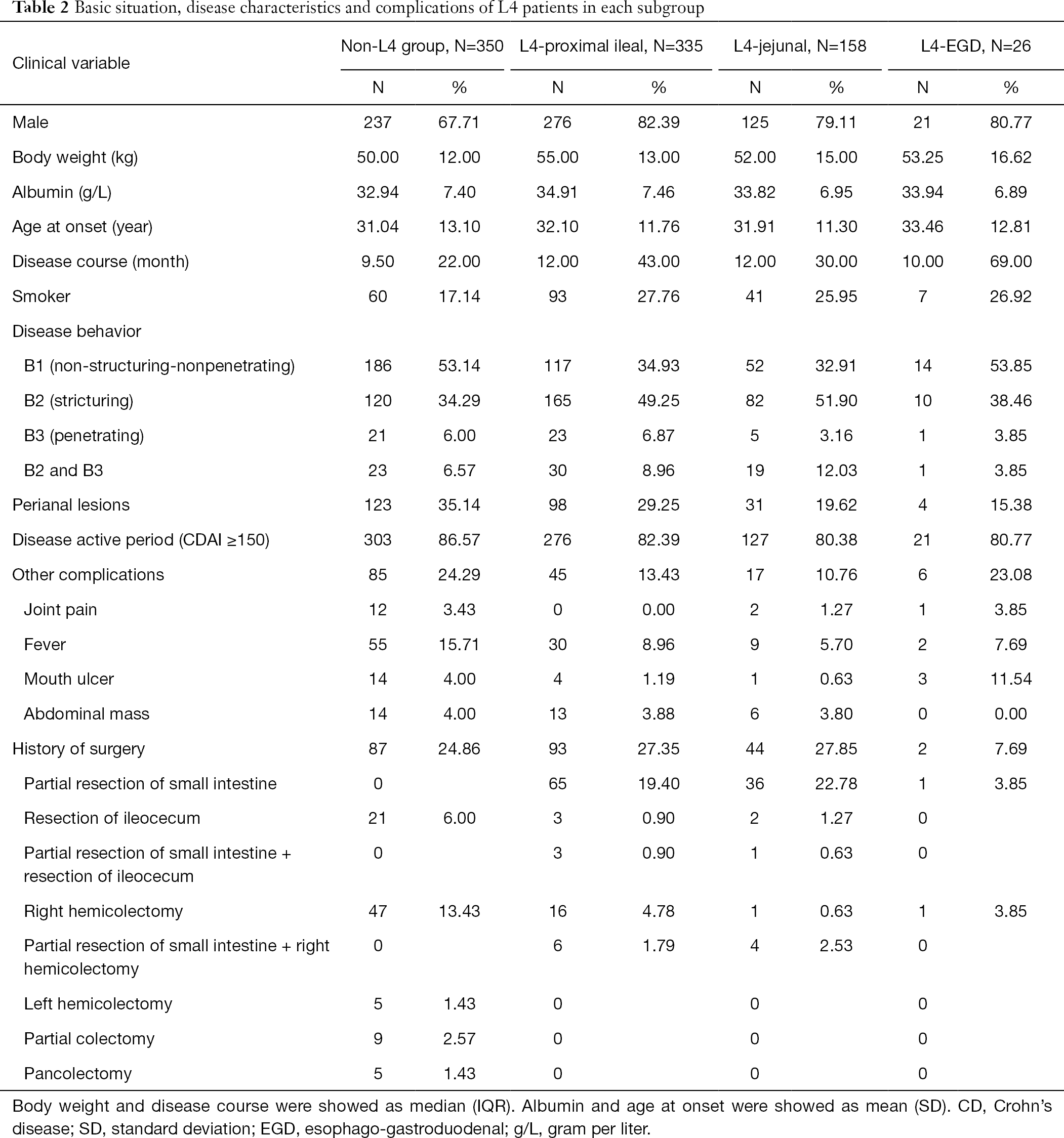 The proportion of male patients was higher in the L4 group, especially in the proximal ileal and jejunal subtypes (Figure 1A). Likewise, smokers were mainly clustered in the L4 group and the proximal ileal or jejunal subtypes (Figure 1A). However, the age of onset was similar in both L4 and non-L4 groups (Figure 1B). Furthermore, patients with jejunal involvement had a higher incidence of stricturing behavior, and those with jejunal or EGD involvement had a lower incidence of perianal disease (Figure 1C). L4 patients had less complications compared to the non-L4 patients, except for the higher incidence of mouth ulcers in the L4-EGD subtype (Figure 1D). Furthermore, L4 patients were more likely to be overweight, and have higher serum albumin levels at diagnosis (Figure 2A,B) and a longer disease course, especially with L4-proximal ileal involvement. No significant differences were seen between the two group in terms of abdominal surgery for CD. The data are summarized in Tables S1-S6.

Food intolerance (FI) and other nutritional indicators in CD patients 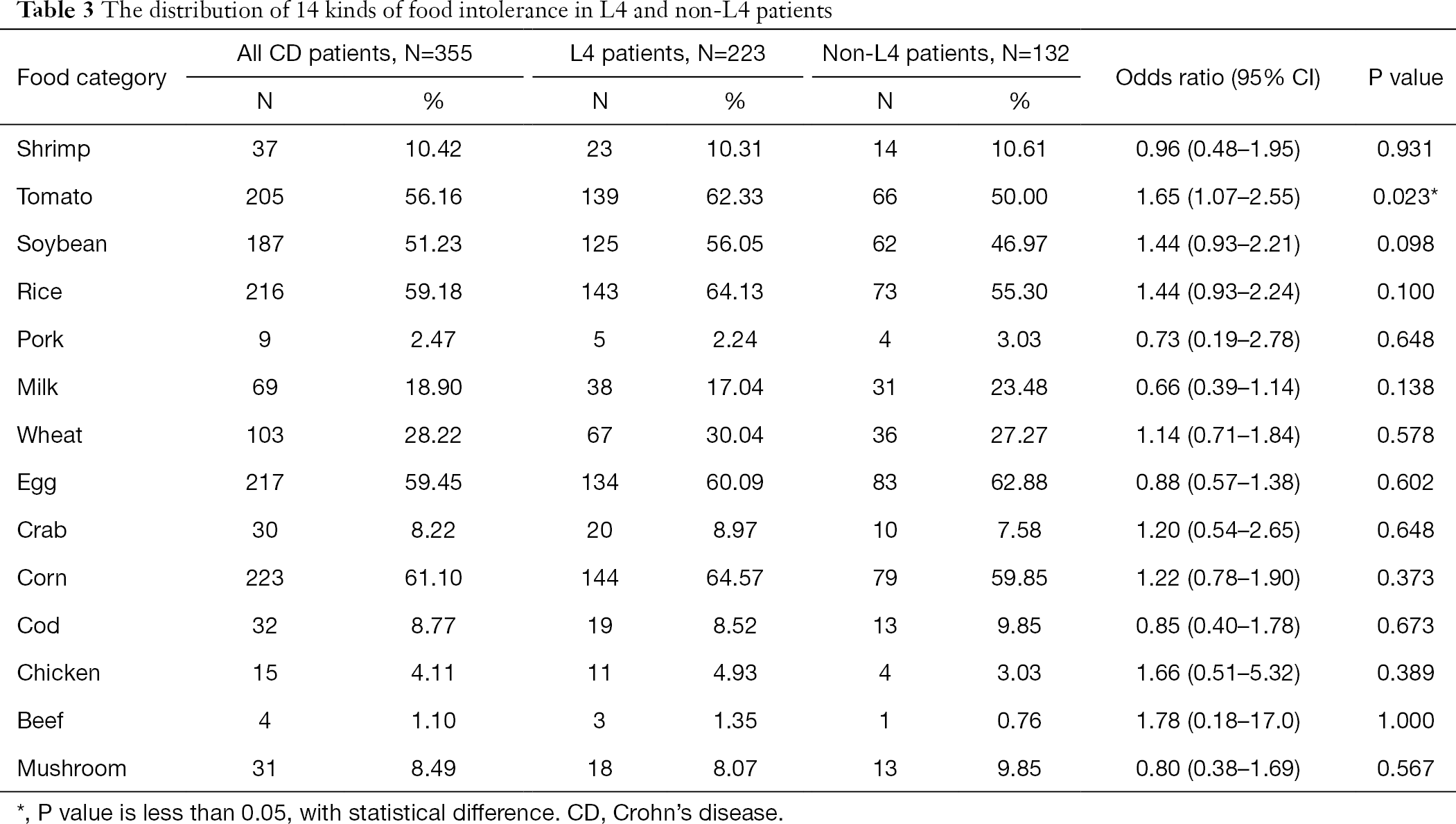 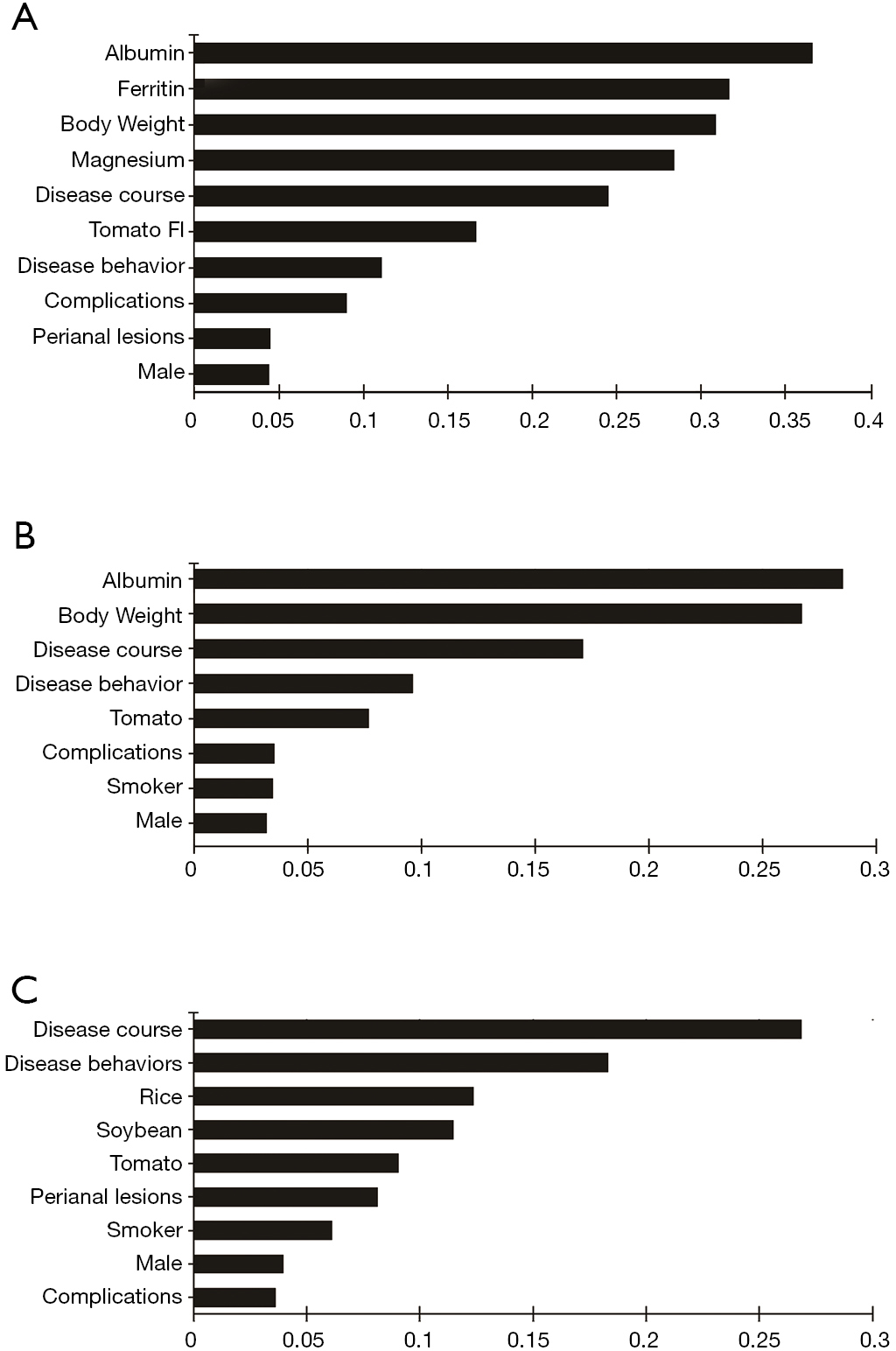 Improvement in upper gastrointestinal examination techniques has significantly increased the detection rate of the CD L4 phenotype. Indeed, we documented a relatively higher rate of L4 phenotypes (59.72%) compared to other studies (4,6,7,16,17). This discrepancy can be attributed to the larger cohort used in our study compared to previous studies on Asian populations (6,16,17), as well as the improvement in imaging techniques for the upper gastric tract over the years. A recent prospective study showed that combining small bowel capsule endoscopy and MRE altered the original Montreal classification in 64% CD patients (18). We established our diagnosis and classification based on CTE, MRE, double-balloon enteroscopy and capsule endoscopy as appropriate.

The L4 subtypes differ considerably in terms of clinical manifestations and baseline nutritional status. A recent study showed that L4 patients are more likely to present a more complex disease, and those with jejunal involvement have a higher risk of stricturing (4). In our cohort, both L4-jejunal and proximal ileal patients showed increased stricturing behavior. Nevertheless, the rate of surgical diagnosis was similar between the L4 and non-L4 patients unlike previous reports. Since a higher disease activity correlates to a higher surgical rate (19), we can attribute this observation to the similar disease activity and CDAI scores between both groups. Our study confirmed previous reports showing higher risk of L4 among male patients and smokers, as well as the prolonged disease course of L4 patients (3). In addition, both factors were more prevalent in the proximal ileal and jejunal subtypes.

Several studies have associated L4 with disease relapse, surgical intervention and worse prognosis, but few have reported on the nutritional status of L4 patients at diagnosis. Body weight and albumin levels are direct indicators of nutritional status. The L4 patients were overweight and had higher albumin levels compared to the non-L4 patients, especially those with proximal ileal disease. In fact, both factors had the higher MDG value in L4 and L4-proximal ileal patients (Figure 3A,B). Since weight does not fully represent the nutritional status, we then compared the BMI between L4 patients and non-L4 patients, and found that the former had higher BMI. This is particularly intriguing since inflammation of the small bowel rather than colonic disease leads to protein-energy malnutrition and specific nutrient deficiency (8). There could be several reasons for our contradictory findings. First, food intake is a major factor affecting CD (20), and sweets and fats in particular are associated with CD aggravation (21). These foods are potentially antigenic and can trigger chronic mild inflammation in the gut, leading to changes in nutritional levels (22). Therefore, we also analyzed the FI profile of the L4 patients. Tomato intolerance was an independent risk factor in L4 patients (Tables 3,4), and its potential role in CD needs to be examined further. Second, patients with CD have an increased risk of developing exocrine pancreatic insufficiency (EPI) (23), which may lead to dyspepsia, malabsorption and malnutrition (23). EPI-induced decrease in the activity of digestive enzymes is related to disease localization and the extent of bowel involvement of CD (24,25). Thus, secondary EPI is a possible reason of the different nutritional levels at diagnosis. Furthermore, heterogenous disease activity may also have resulted aberrantly higher weight and albumin seen in the L4 patients of our cohort. Malnutrition in CD is influenced by several factors, including the activity, duration and extent of the disease, and especially the severity of inflammatory response (11). In fact, recent studies recommend assessment of endoscopy and histological inflammation apart from clinical symptoms in the CD patients (26,27), and chronic inflammation can be a causative factor of the nutritional differences seen in patients at diagnosis.

The large cohort and advanced imaging techniques used in our study resulted in a significantly higher rate of documented L4 disease compared to other studies. We also found that the proximal ileal subtype was predominant in prolonged disease and presence of stricturing behavior. Furthermore, we confirmed a higher nutritional level at diagnosis in the L4 patients, especially those with proximal-ileal involvement. There are however some limitations in our study that ought to be addressed. First, the retrospective design of the study limited the translation of a positive association to causality. Second, body weight, BMI and albumin levels may not be representative of the true nutritional status of CD patients. Finally, despite the apparent role played by FI, the exact pathological relationship between food and CD is not fully clear. Therefore, further prospective trials with multiple nutrition factors and questionnaires should be conducted in order to elucidate the potential associations between CD subtypes and nutritional status.

In conclusion, the L4 phenotype is more common in male patients, and in those with prolonged disease course, stricturing behavior and other complications. In addition, the L4 patients had higher weight and BMI, lower ferritin levels and higher albumin levels at the time of diagnosis, which may be related to FI and disease activity. Our findings provide relevant clinical information for evaluating the nutritional status of CD patients with different phenotypes at the time of diagnosis.

Funding: This work is supported by grants from National Natural Science Foundation of China (81770584).

Reporting Checklist: The authors have completed the STROBE reporting checklist. Available at http://dx.doi.org/10.21037/atm-20-2212

Conflicts of Interest: All authors have completed the ICMJE uniform disclosure form (available at http://dx.doi.org/10.21037/atm-20-2212). The authors have no conflicts of interest to declare.

Ethical Statement: The authors are accountable for all aspects of the work in ensuring that questions related to the accuracy or integrity of any part of the work are appropriately investigated and resolved. The trial was conducted in accordance with the Declaration of Helsinki (as revised in 2013). The research protocol was approved by the Ethical Committee of the Xiangya Hospital of Central South University (No. 201912457) and informed consent was taken from all the patients. The study outcome will not affect the future management of patients. Patient data in this study were retrieved from the hospital medical record system and patient’s personal data have been secured.