Although the pathogenesis of penile squamous cell carcinoma (PSCC) is still unclear, previous studies have found many potential risk factors, including phimosis, HPV infection, human immunodeficiency virus (HIV) infection, balanitis, excessive sexual partners, and immunodeficiency. Meanwhile, tobacco use, age and race may also be associated with the development of PSCC (4-11). In the past few decades, the prognosis of advanced penile cancer has been poor (12,13). The 5-year overall survival (OS) rates for regional and distant PSCC diseases were only 50% and 12% between 2009 and 2015 (https://www.cancer.org/cancer/penile-cancer/detection-diagnosis-staging/survival-rates.html). Therefore, it is critical to investigate the risk predictors and prognostic factors for PSCC patients. Currently, most studies (14,15) on PSCC are case reports or retrospective studies based on small populations due to the rarity of PSCC itself. Moreover, only few studies have been performed to evaluate the temporal incidence trends and survival outcomes of PSCC.

The Surveillance, Epidemiology and End Result (SEER) program is a large population-based database that collects cancer cases in the United States. It contains detailed information on cancer incidence, mortality and prognosis of approximately 30% of the US population. We conducted this study based on the SEER database to investigate the latest incidence trends and survival outcomes of patients with PSCC. We present the following article in accordance with the PRISMA reporting checklist (available at http://dx.doi.org/10.21037/atm-20-1802).

Original data of this study were collected from the SEER database. The SEER registry is a public registry supported by the National Cancer Institute (NCI). SEER 9 included data from nine registries in Connecticut, Hawaii, Iowa, New Mexico, Utah, Detroit (Michigan), San Francisco Oakland (California), Seattle-Puget Sound (Washington) and Atlanta (Georgia) since 1975. SEER 13 collected cancer cases diagnosed since 1992 with four additional registries [Alaska Natives, Los Angeles, San Jose-Monterey (California) and rural Georgia]. At the beginning of the 21st century, SEER 18 was developed with five new registries added (including Greater California, Greater Georgia, Kentucky, Louisiana and New Jersey). Data agreement was signed before this study with the username of 15440-Nov2018. This study was exempt from Institutional Review Board (IRB) approval because the original data were from a public database.

In this study, patients diagnosed with PSCC were respectively extracted from SEER 18 using the “Case Listing Session”. The inclusion criteria were as follows: (I) diagnosed as PSCC (International Classification of Diseases for Oncology: C60.0-Prepuce, C60.1-Glans penis, C60.2-Body of penis, C60.8-Overlapping lesion of penis and C60.9-Penis, NOS. Histologic Type: 8050-8089) with microscopical confirmation; (II) complete data were available with active follow-up; (III) type of reporting source was not autopsy only or death certificate only; (IV) cancer patients (behavior =3); (V) male sex.

Age at diagnosis was mainly categorized into <35, 35–49, 50–64, 65–79 and ≥80 years old. Primary tumor site was classified into prepuce, glans penis, body of penis, overlapping lesion of penis and not specified. Extent of disease was designated as distant, regional and localized. Race was coded as white, black, or other. The included patients were further divided into two groups based on the existence of a previous primary malignancy.

Multivariate Cox proportional hazards regression analyses were conducted to explore independent factors which affected cancer-specific survival (CSS) significantly. Co-variates of interest included age at diagnosis, presence of a previous primary cancer, race, decades of diagnosis, primary tumor site, extent of disease, pathological grade, the administration of surgery and so on. Year of diagnosis was divided into 1975–1984, 1985–1994, 1995–2004, 2005–2016 with 10 years as an interval. Furthermore, based on the results of multivariate Cox analyses, survival curves for different variables were produced by Kaplan-Meier (KM) analyses. 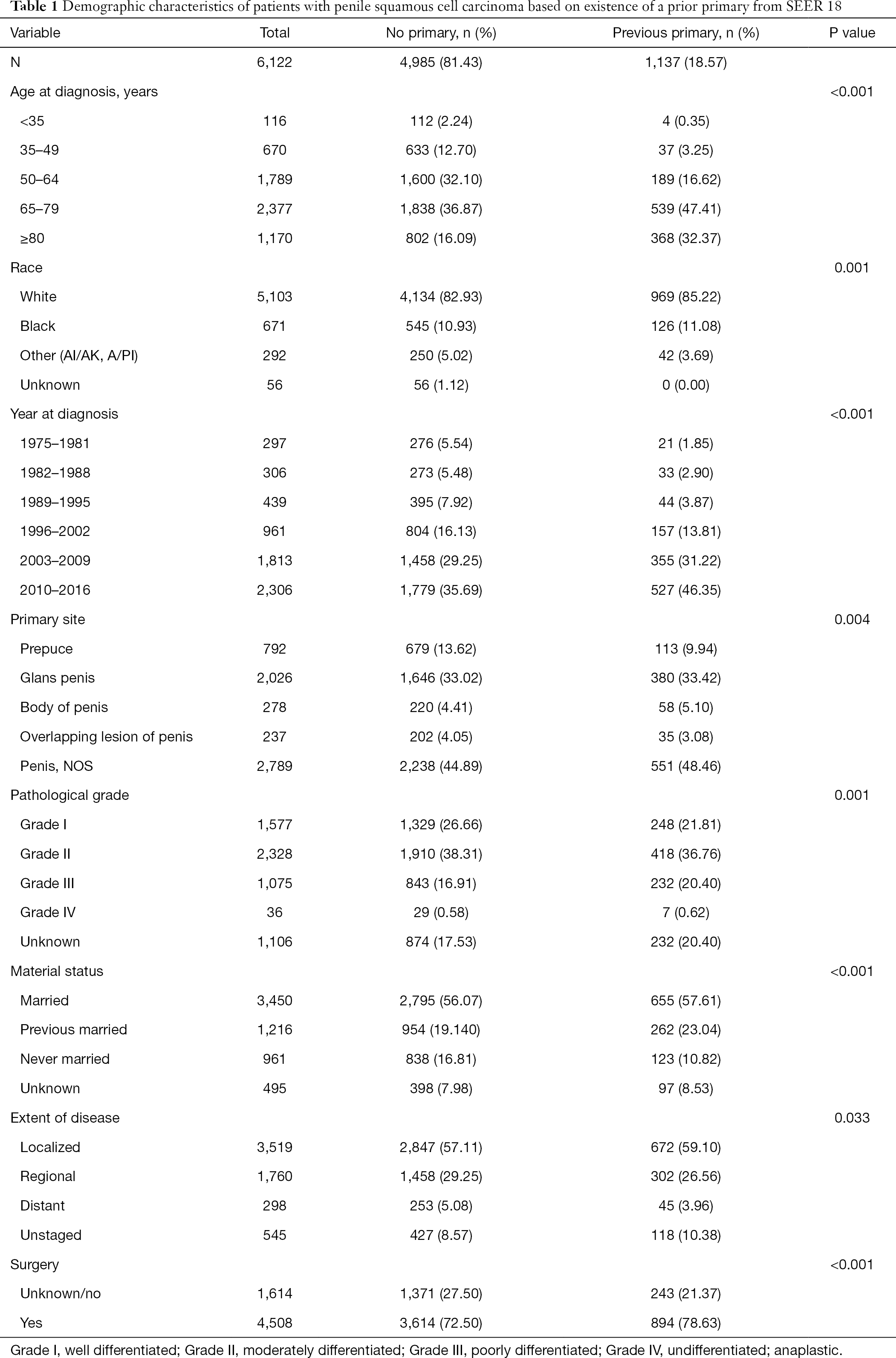 Tables 2-4 show the case counts and IRs for PSCC by racial group and age group. As shown in Figure 1, the age-adjusted IR declined before 1987 and fluctuated slightly between 1987 and 1997 for male population. After 1997, it showed an upward trend. For patients without a previous primary malignancy, the age-adjusted IR was basically consistent with that of the general population. However, for those with previous a previous malignancy, the overall incidence has been increasing slowly. 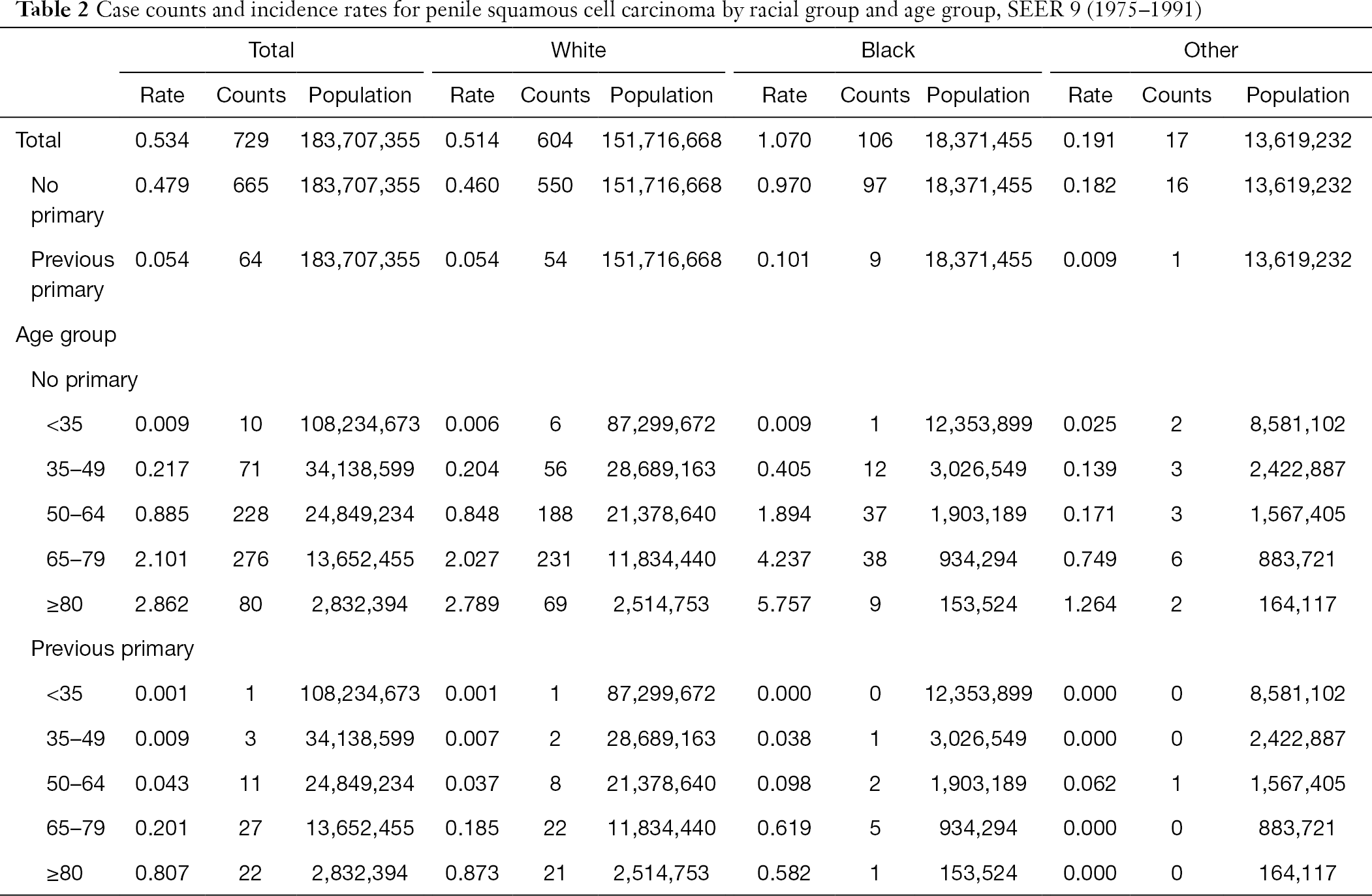 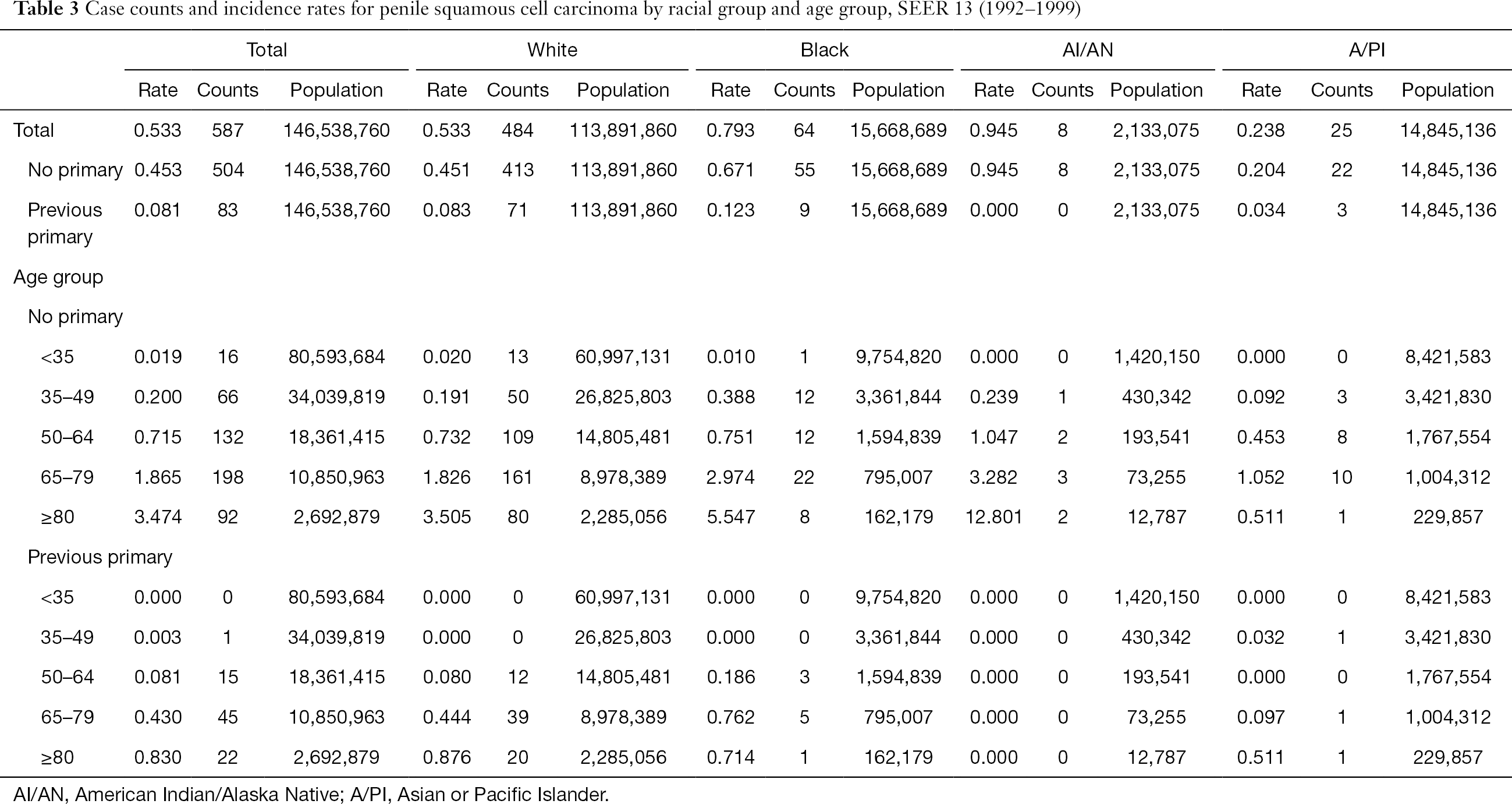 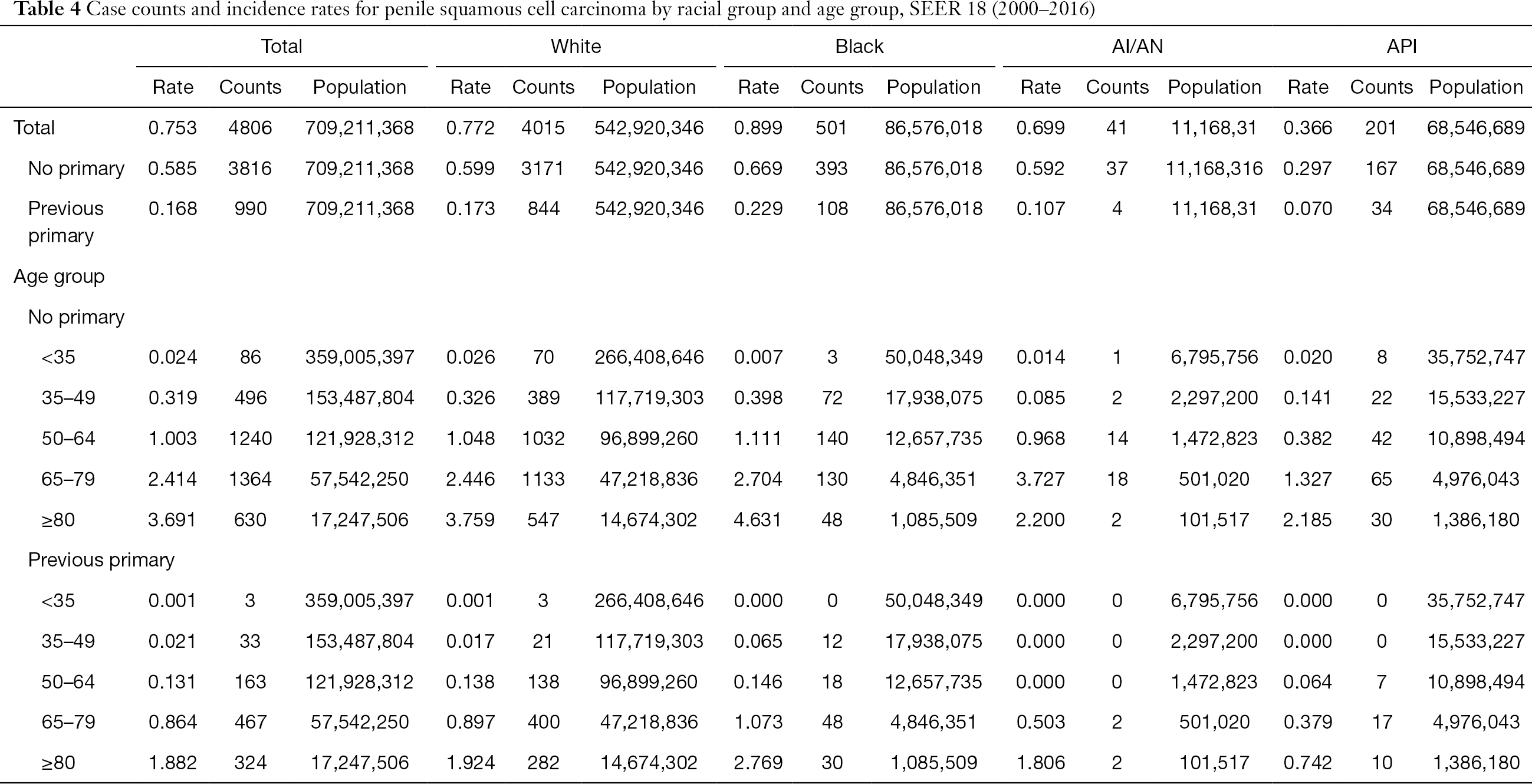 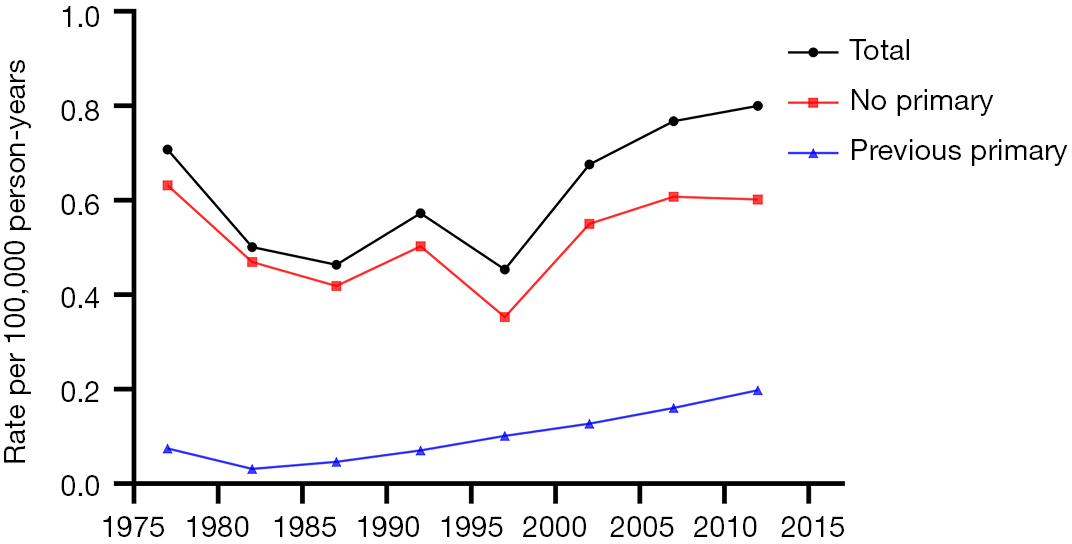 Figure 1 Incidence rates trends of penile squamous cell carcinoma in men from 1975 to 2016.

The incidence trend of PSCC in the general population was similar with that in those without a previous malignancy. In white individuals, the IR was basically in a steady upward trend. However, in blacks and other individuals, the IRs experienced a large decline before 1985, and then gradually stabilized and increased slightly (Figure 2A,B). However, the IRs in all races have been increasing for patients with a previous malignancy (Figure 2C). Additionally, the IRs in black individuals were the highest while those in other races (AI/AN and A/PI) were the lowest no matter in which population.

Figure 2 Incidence rates trends of penile squamous cell carcinoma in men by race from 1975 to 2016.

The IR trend in the general population was consistent with that in patients without a previous malignancy (Figure 3). Among people with a previous primary cancer, the IR trends varied greatly, which may be explained by a small population base and a small number of cases. On the whole, the IRs were basically on the rise among people of all age groups. As for different age groups, the IRs of PSCC in the general population increased along with age. For those younger than 50 years old, the IRs were very low, especially in people younger than 35 years old (tended to be 0). 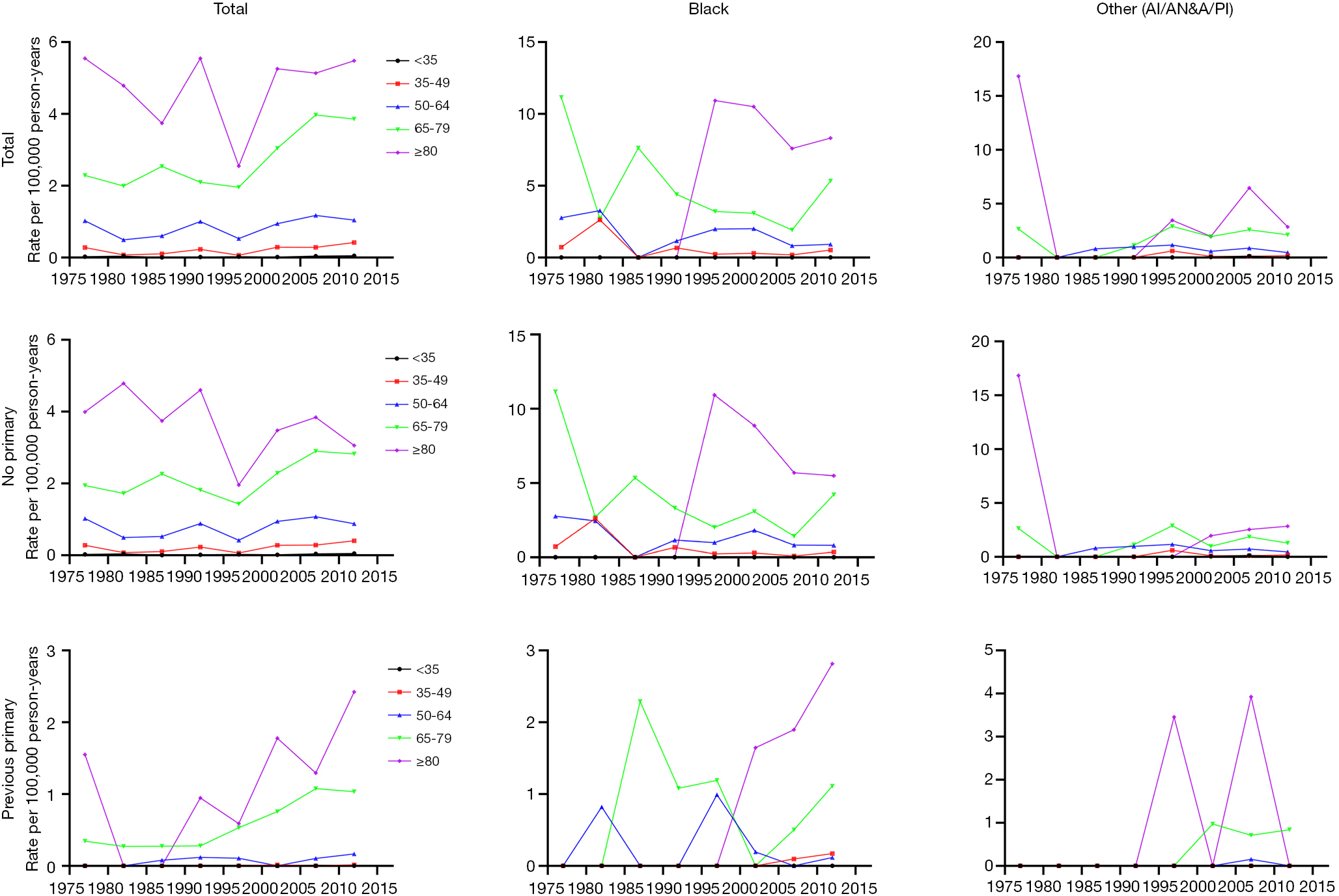 Figure 3 Incidence rates trends of penile squamous cell carcinoma in men by age from 1975 to 2016. 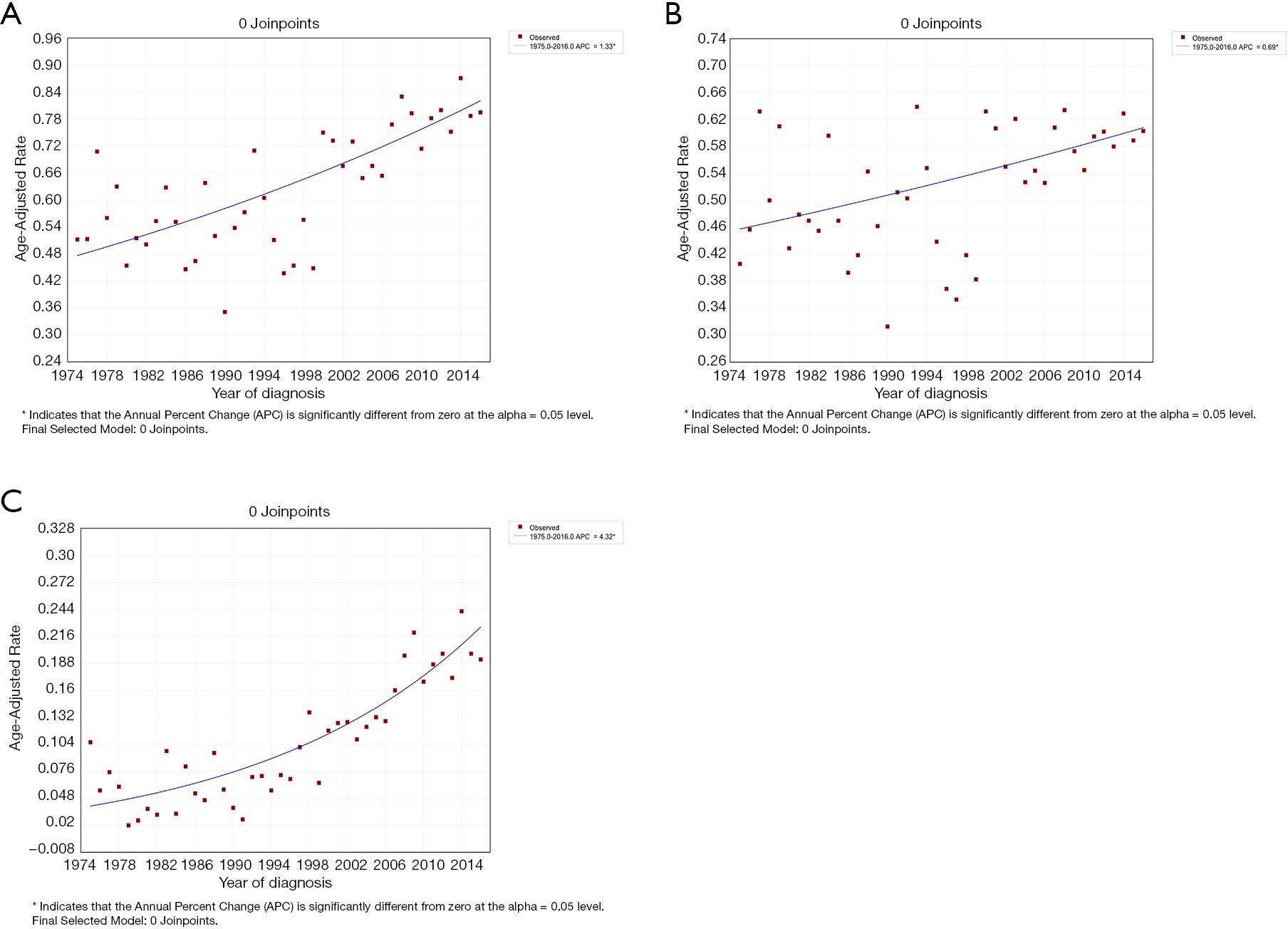 A total of 6,079 patients were selected for CSS analysis (43 patients were excluded because of unknown cause of death). Multivariate Cox analysis showed that age at diagnosis, pathological grade, extent of disease, marital status, the administration of surgery and presence of previous primary malignancy were independent prognostic factors for CSS (Table 5). 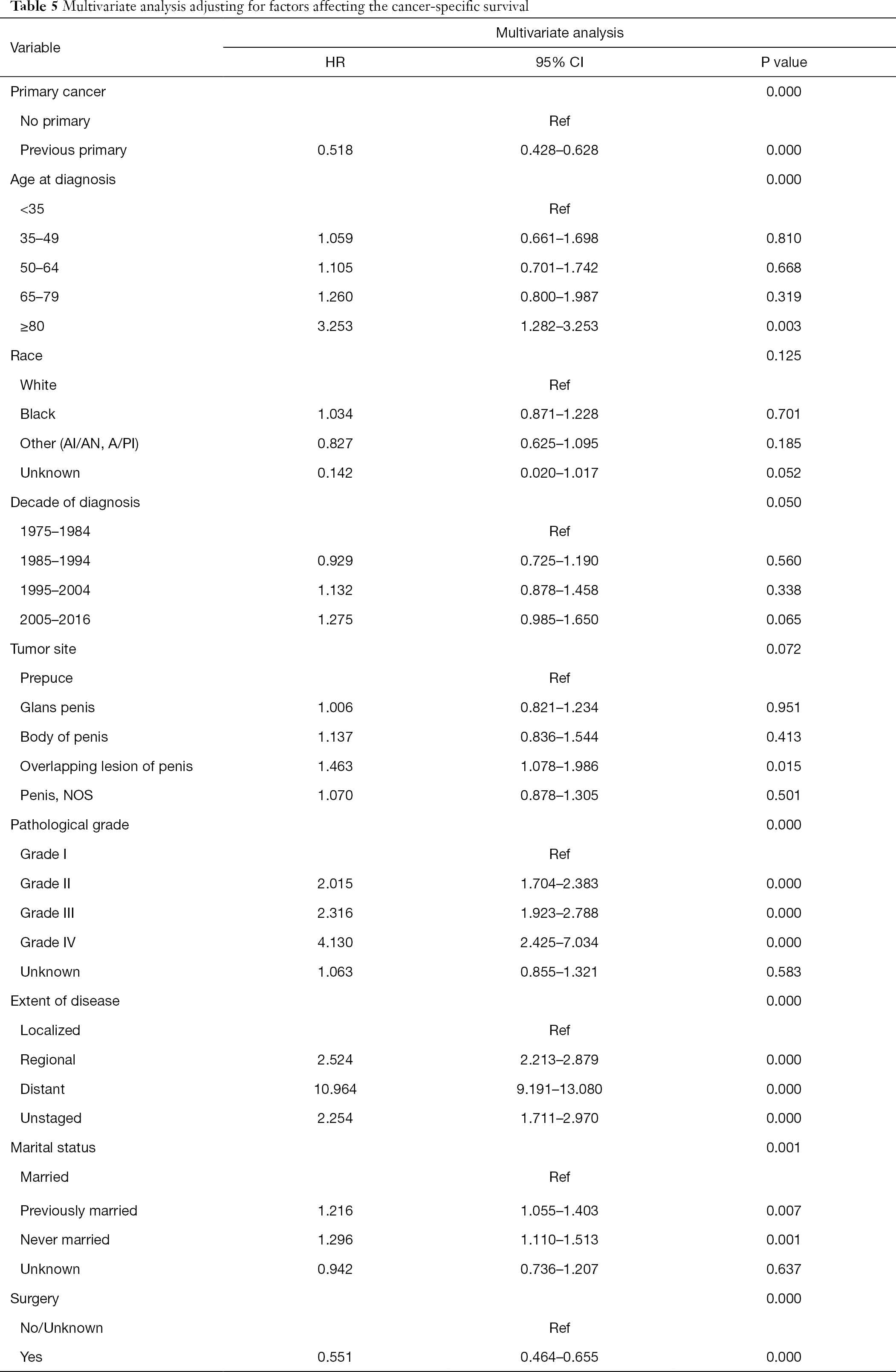 Subsequently, KM curves were generated to learn the actual effect of different variables on CSS (Figure 5). Older patients had worse prognosis than younger patients (P<0.001). Patients who underwent surgery had better prognosis than those who did not (P<0.001). Additionally, patients with distant diseases or higher-grade pathology had worse CSS. In our study, the prognosis of married men was relatively better than those who were never married. Interestingly, we found that patients with a previous malignancy had better CSS than those who did not. We believed that many patients would die from the previous cancer, but not PSCC. To verify our conjecture, we analyzed the survival impact of previous malignancies on PSCC patients. Results showed that a previous primary malignancy was tightly associated with worse OS in PSCC patients (Figure 6). 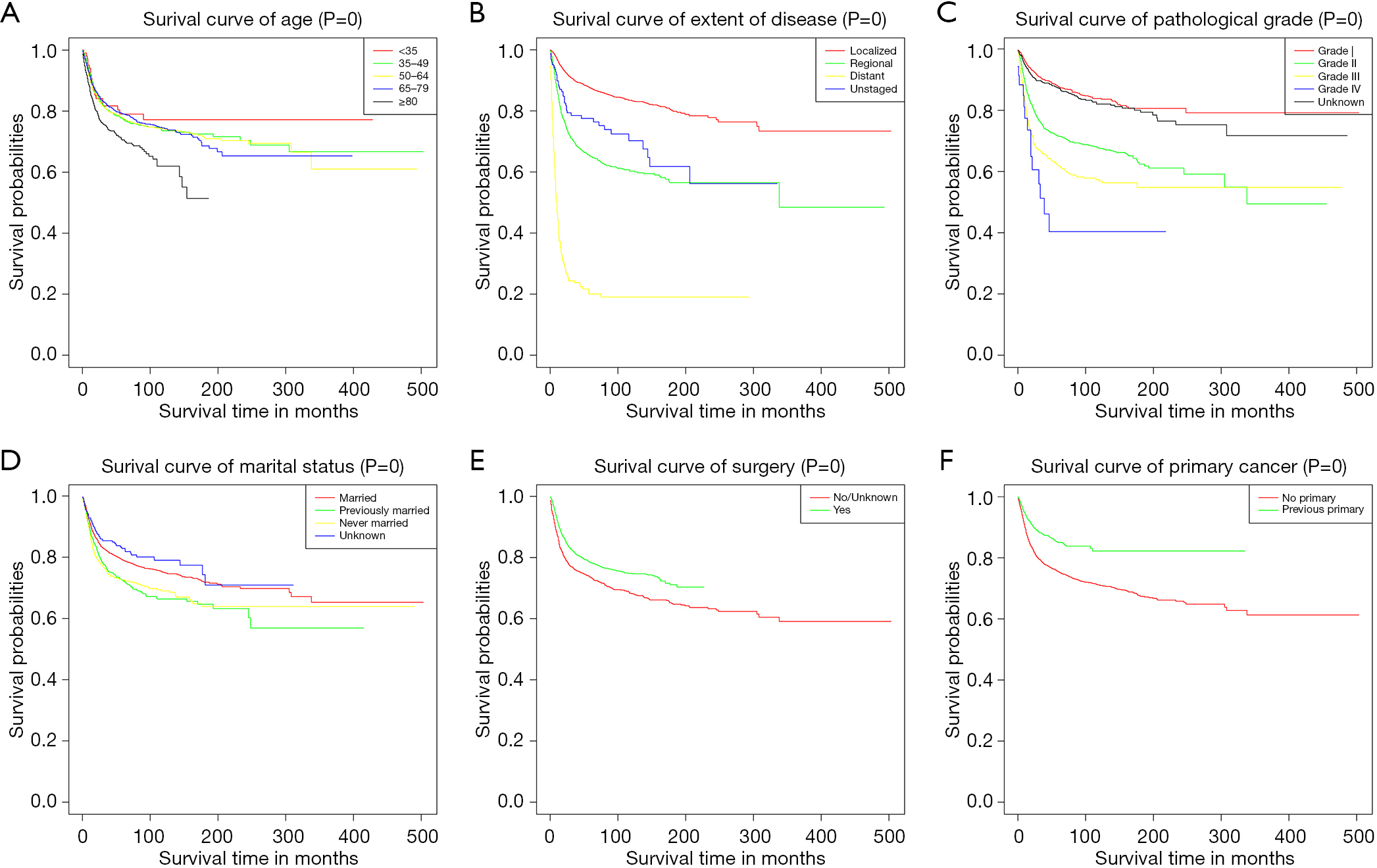 Figure 5 Kaplan-Meier curves of cancer-specific survival stratified by age (A), extent of disease (B), pathological grade (C), marital status (D), use of surgery (E) and presence of a previous primary malignancy (F). 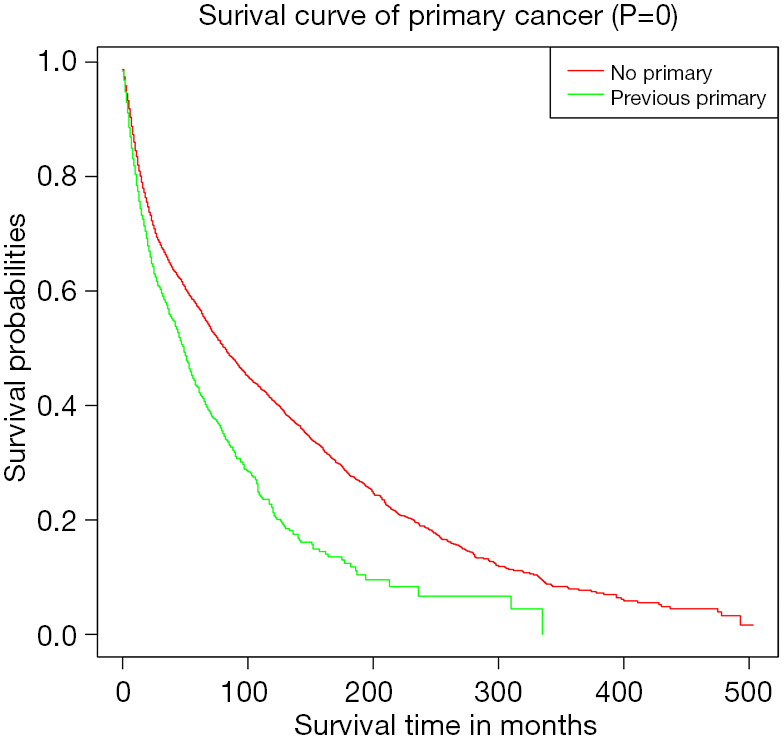 Figure 6 Kaplan-Meier curves of overall survival for stratification by presence of a previous primary malignancy.

This study provided a view of the epidemiological of PSCC in the USA from 1975 to 2016. IRs of PSCC in this study were similar with those in previously published studies. Research conducted by Barnholtz-Sloan et al. revealed that there were 5.8 new cases of penis cancer per million men per year on average between 1993 and 2002 in the USA (4). Lagacé et al. demonstrated that the IR of penile cancer in Canada was 6.077 per million men per year from 1992 to 2010 (16). This consistency indicated the geographic continuity of incidence trends, since these studies were all based on populations in North America. In our study, the overall IR of PSCC was basically similar to that in previous studies.

An over-time increase in the overall IR of PSCC was identified from 1997 to 2016. Such a growing trend of IR may be attributed to an increasing rate of HPV infection which was widely recognized as a risk factor of PSCC development, as well as a lower rate of neonatal circumcision (17-20). Neonatal circumcision was negatively associated with the risk of PSCC, since it may reduce the risk of HIV and HPV infection and chronic inflammation by eliminating dirt (10). For those without a previous primary malignancy, the IR experienced a decline before 1987, while for those with a previous primary malignancy, the IR has been increasing since 1975. Therefore, difference in incidence may be attributed to the history of malignant tumors, which may transfer to the penis or make the body in a low immune status, thus promoting this upward trend. Moreover, we found that the IRs in black individuals were the highest, which may because of the early exposure to HPV through sexual contact (4,8,21). Furthermore, our results revealed that the IRs increased along with age, and in people younger than 50 years old, the IRs tended to be zero. Ertoy Baydar et al. reported that the average age of PSCC diagnosis was 66.5 years (51–83 years) in their study (22). This age stratification suggested that older patients, especially those older than 50, were at a higher risk of developing PSCC.

In our study, age at diagnosis, pathological grade, extent of disease, marital status, the administration of surgery and presence of previous primary malignancy were identified to be independent prognostic factors for CSS in PSCC patients. Previous studies have reported that age, tumor stage, extent of disease and the administration of surgery were significantly associated with tumor prognosis in many cancer types (23,24). To our knowledge, those patients who were older, poorly differentiated, metastatic, and not surgically resected were bound to have a poor prognosis. Additionally, Ulff-Møller et al. found that unmarried men were at increased risk of developing invasive penile cancer compared to married men (25). In many Western countries, it has been increasingly common for couples to have unregistered partnerships like marriage. It may be biased to use marital status to evaluate prognosis, since marital status may not directly reflect the number of sexual partners. Furthermore, we found that patients with a history of previous malignancies tended to have a poor prognosis. Firstly, those with a prior primary cancer were more likely to be older, diagnosed in the last decade and had worse differentiation. Additionally, patients with previous malignancies were in worse physical condition and psychological health, which were tightly associated with worse prognosis.

The main advantage of our study was the use of large population-based datasets. However, our research still had some limitations. First of all, numerous large-scale population-based studies have been shown to own inherent limitations, including the risk of data loss and patient classification errors. Sanders et al. (26) discussed these limitations in more detail in their article. In addition, selection bias may exist because of the retrospective nature. Moreover, there was a deficiency of available data on certain risk factors related to incidence and prognosis in SEER database, such as smoking history, HPV infection status and chemotherapy status, which may affect the comprehensiveness of the conclusions. Hence, further prospective and well-designed studies are needed to validate our results.

In conclusion, our study provided a view of the epidemiological of PSCC in US from 1975 to 2016. The incidence of PSCC has been increasing in recent years. Moreover, several independent prognostic factors for CSS of PSCC patients were identified, allowing surgeons to assess the individualized risk in advance.

Funding: This work was supported by National Natural Science Foundation of China (No.81702520).

Reporting Checklist: The authors have completed the PRISMA reporting checklist. Available at http://dx.doi.org/10.21037/atm-20-1802

Conflicts of Interest: All authors have completed the ICMJE uniform disclosure form (available at http://dx.doi.org/10.21037/atm-20-1802). XL served as an unpaid Section Editor of Annals of Translational Medicine from January 2020 to December 2021. The other authors have no conflicts of interest to declare.

Ethical Statement: The authors are accountable for all aspects of the work in ensuring that questions related to the accuracy or integrity of any part of the work are appropriately investigated and resolved. This study was exempt from Institutional Review Board (IRB) approval because the original data were from a public database.