Intracranial aneurysm (IA) is the irreversible dilation of cerebral arteries, and the rupture of IA is the primary cause of subarachnoid hemorrhage (1,2). The prevalence of unruptured IA is about 3–5% in the general population, and about 20–30% of these patients have multiple aneurysms (3-5). The main risk factors for IA rupture include hypertension, smoking, aneurysm size, and location. Currently, endovascular coiling and surgical clipping are the two main preventative methods for IA rupture (6). Although widely used, the overall morbidity and mortality associated with these two invasive procedures are not negligible, and pharmacological therapies might provide an alternative for those who have high risks for invasive procedures (7). However, there are few pharmacological therapies available for the prevention of IA rupture (6,7). Thus, exploring the molecular mechanisms underlying the event of IA rupture and identifying the potential molecular targets for preventing IA rupture are vitally important.

Previous studies have suggested that inflammation and immune response, extracellular matrix degradation, hemodynamic stress, etc. participate in the pathogenesis and rupture of IA (8-12). Although many studies have performed detailed experiments to elucidate the molecular mechanisms behind IA rupture, few studies have used a weighted correlation network analysis (WGCNA) approach based on high-throughput data (such as mRNA microarray and RNA-seq) to identify potential targets that might have a critical biological function in the mechanism of IA rupture.

The WGCNA algorithm was created by Zhang & Horvath in 2005 and was initially used to create a gene co-expression network from mRNA microarray data (13). WGCNA generates a scale-free gene co-expression network based on Pearson’s correlation matrix of genes and detects gene modules from the network generated. These gene modules can be used for further analysis, such as correlating modules with clinical traits, functional enrichment, and hub gene identification (13). Furthermore, WGCNA can be used to construct weighted correlation networks based on proteome, metabolome, and even microbiome data (14,15). The ‘WGCNA’ R package was available on the R official website (https://cran.r-project.org/) (16).

In our study, we focused on key genes underlying the molecular mechanism of IA rupture. We included 3 mRNA microarray datasets from the Gene Expression Omnibus (GEO) database (http://www.ncbi.nlm.nih.gov/geo/). Expression profiling data of unruptured IA and ruptured IA were used to construct the co-expression network. The gene modules were detected, and the genes in each module were subjected to functional enrichment analysis. Differentially expressed genes (DEGs) were mapped into the co-expression network and constructed into a DEG co-expression network. Key genes were identified based on this DEG co-expression network, and gene set enrichment analysis (GSEA) was conducted for them. Finally, the key genes were further validated by using another GEO dataset, and the potential diagnostic value of these key genes was determined. We present the following article in accordance with the MDAR reporting checklist (available at http://dx.doi.org/10.21037/atm-20-4083).

The study was conducted in accordance with the Declaration of Helsinki (as revised in 2013). The raw datasets were available from the GEO database (http://www.ncbi.nlm.nih.gov/geo/; GSE13353, GSE15629, GSE54083 and GSE122897). In our study, neither human trials nor animal experiments were executed.

The datasets GSE13353, GSE15629, and GSE54083 were selected from the GEO database. Series matrix files and data tables of these microarray platforms (GPL570, GPL6244, and GPL4133, respectively) were downloaded.

Genes in each module were subjected to gene ontology (GO) and Kyoto Encyclopedia of Genes Genomes (KEGG) pathway analysis to understand their biological function better. The Database for Annotation, Visualization, and Integrated Discovery (DAVID) v6.8 (http://david.abcc.ncifcrf.gov/) was used for analysis. The cut-off for functional annotation was set as count >2 and P<0.05. The co-expression patterns between ruptured IA samples and unruptured IA samples were compared based on the results of the functional annotations.

GSEA and validation of key genes

The GSEA v4.0.3 software was used to conduct GSEA for each key gene. The c5.bp.v7.0.symbols.gmt downloaded from the GSEA official website (https://www.gsea-msigdb.org/gsea/downloads.jsp) was used as the reference gene sets. For each key gene, the IA samples were divided into two groups according to the median expression of the particular key gene to perform GSEA. Finally, another GEO dataset (GSE122897) containing RNA-seq data of ruptured IA samples and unruptured IA samples was chosen for validation of the key genes. Finally, key genes were used to conduct receiver operating characteristic (ROC) analysis to show the potential diagnostic value of these genes. 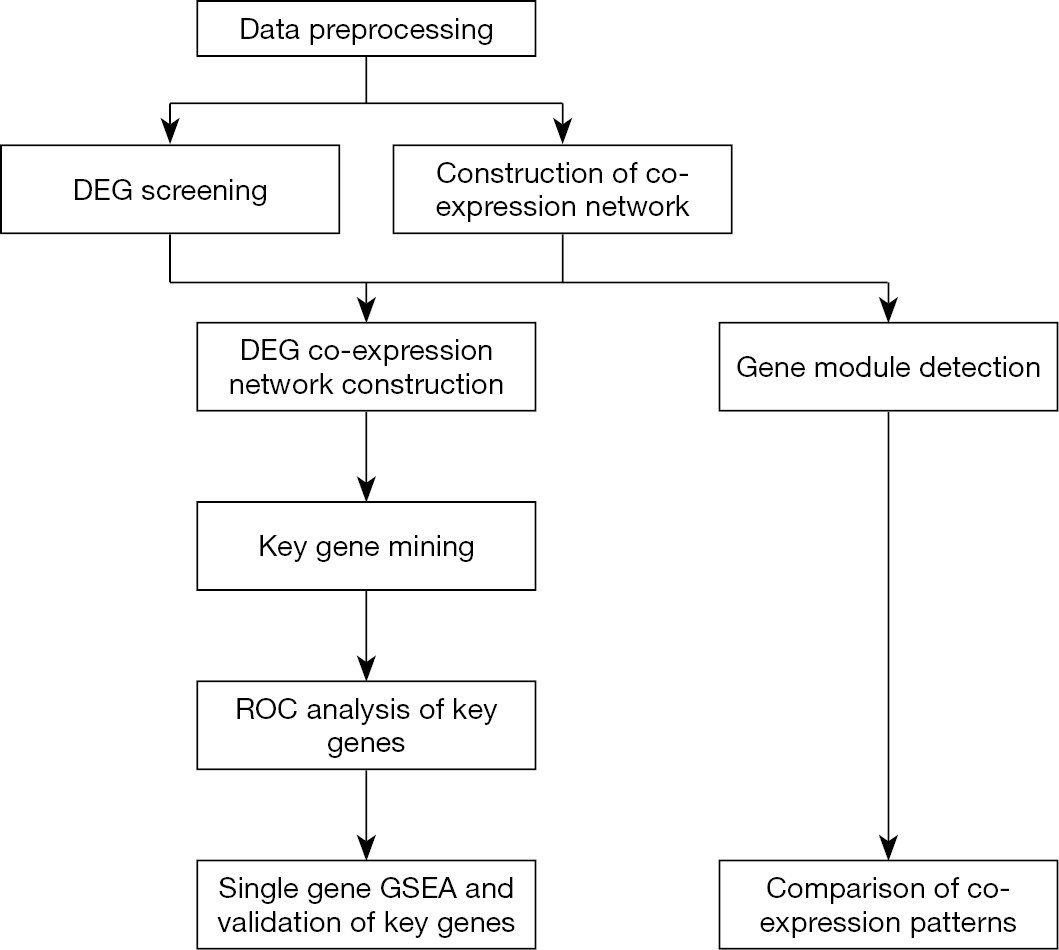 We screened 49 DEGs, of which 28 genes were up-regulated, and 21 genes were down-regulated in ruptured IA samples. DEGs with top-10 fold-change are shown in Table 1. The expression patterns of DEGs between ruptured IA and unruptured IA are detailed in Figure 2. 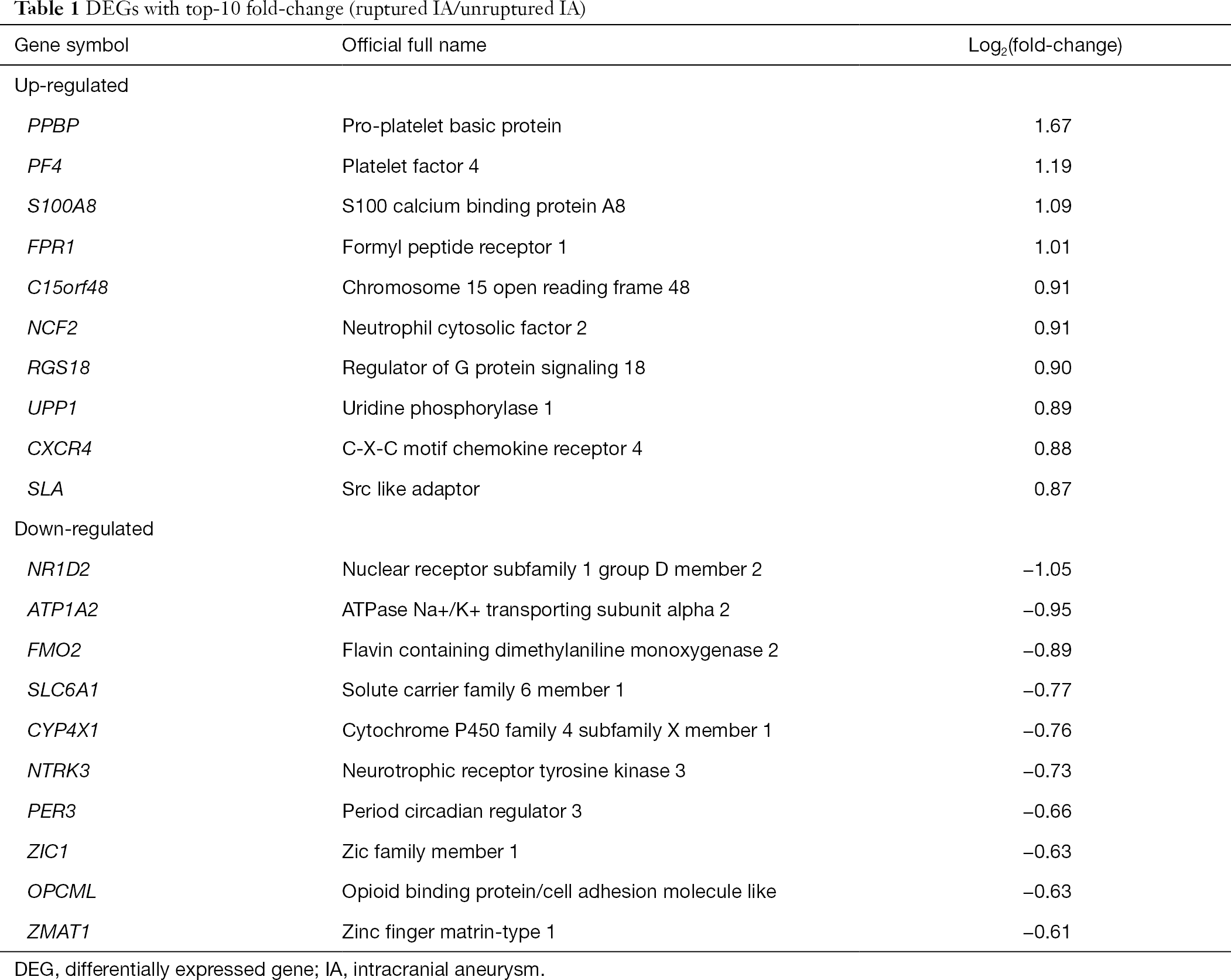 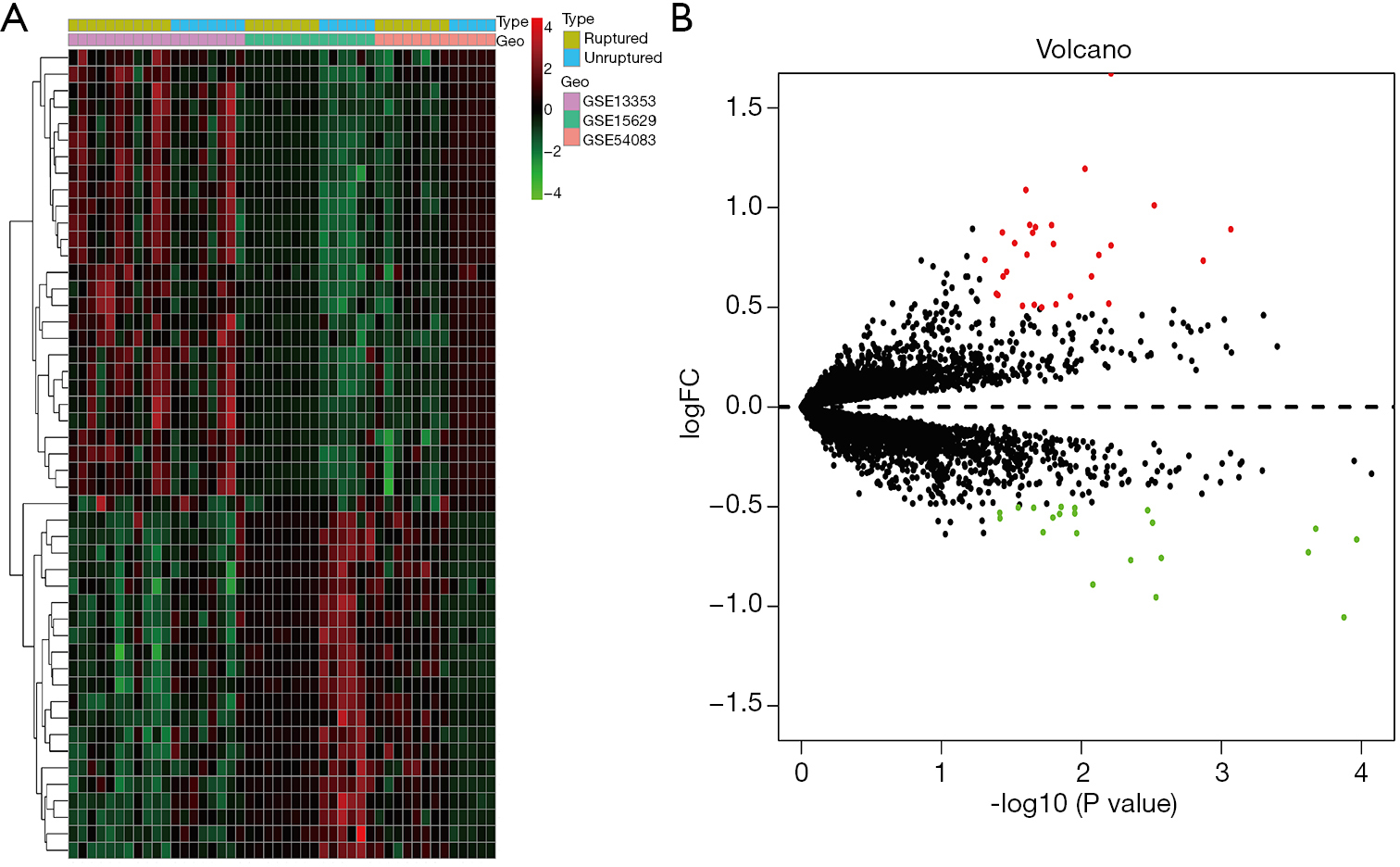 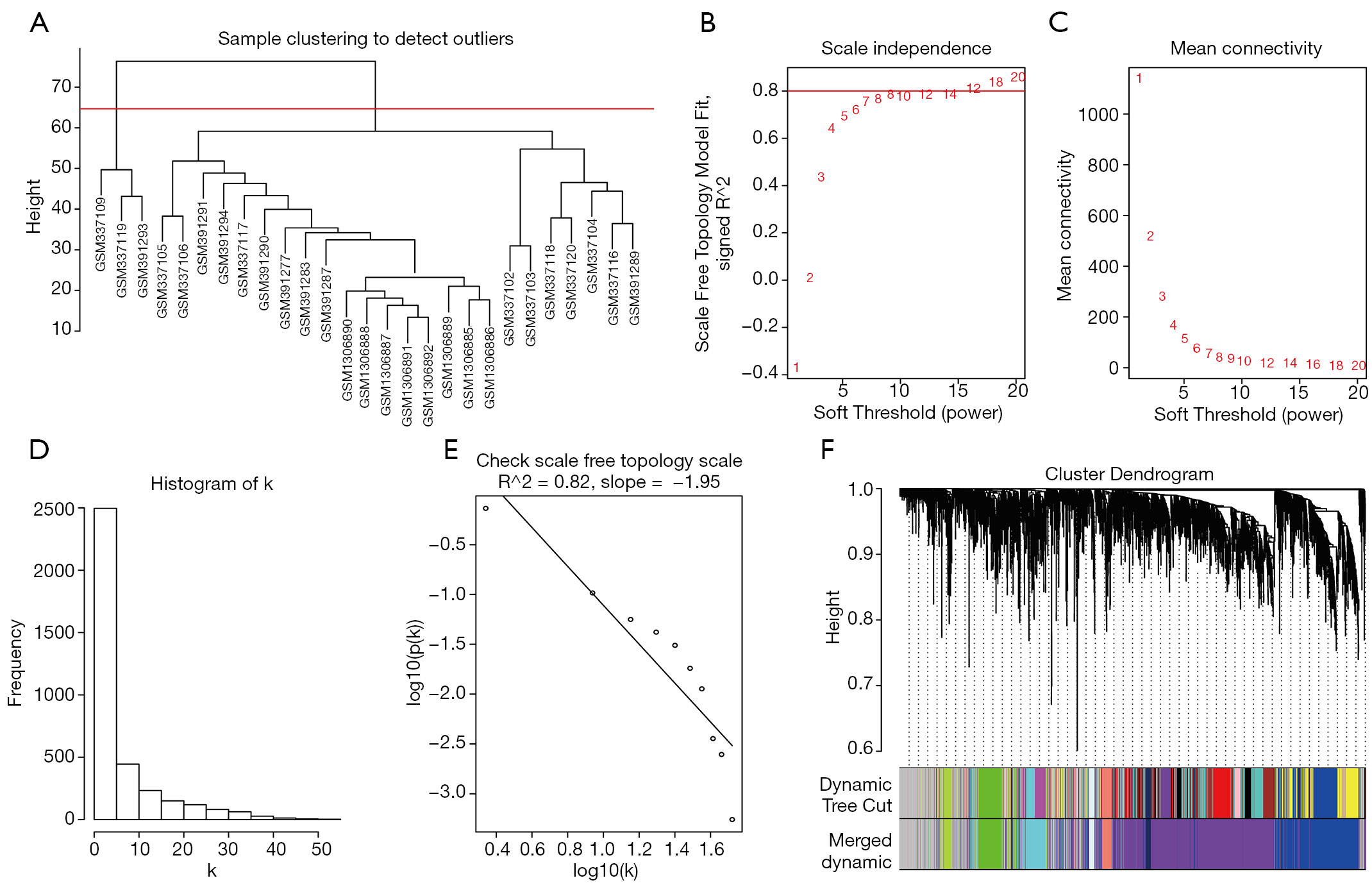 Figure 3 Construction of weighted gene co-expression network of ruptured IA samples. (A) Sample clustering detected 3 outliers (GSM337109, GSM337119 and GSM 391293). (B,C) The cut-off was set to be 0.8 and β=16 was chosen to be the soft-threshold power. (D,E) The histogram and the linear fitting plot showed that the co-expression network we constructed met the requirement of scale-free topology. (F) 8 modules were detected after merging modules generated by dynamic tree cut. IA, intracranial aneurysm. 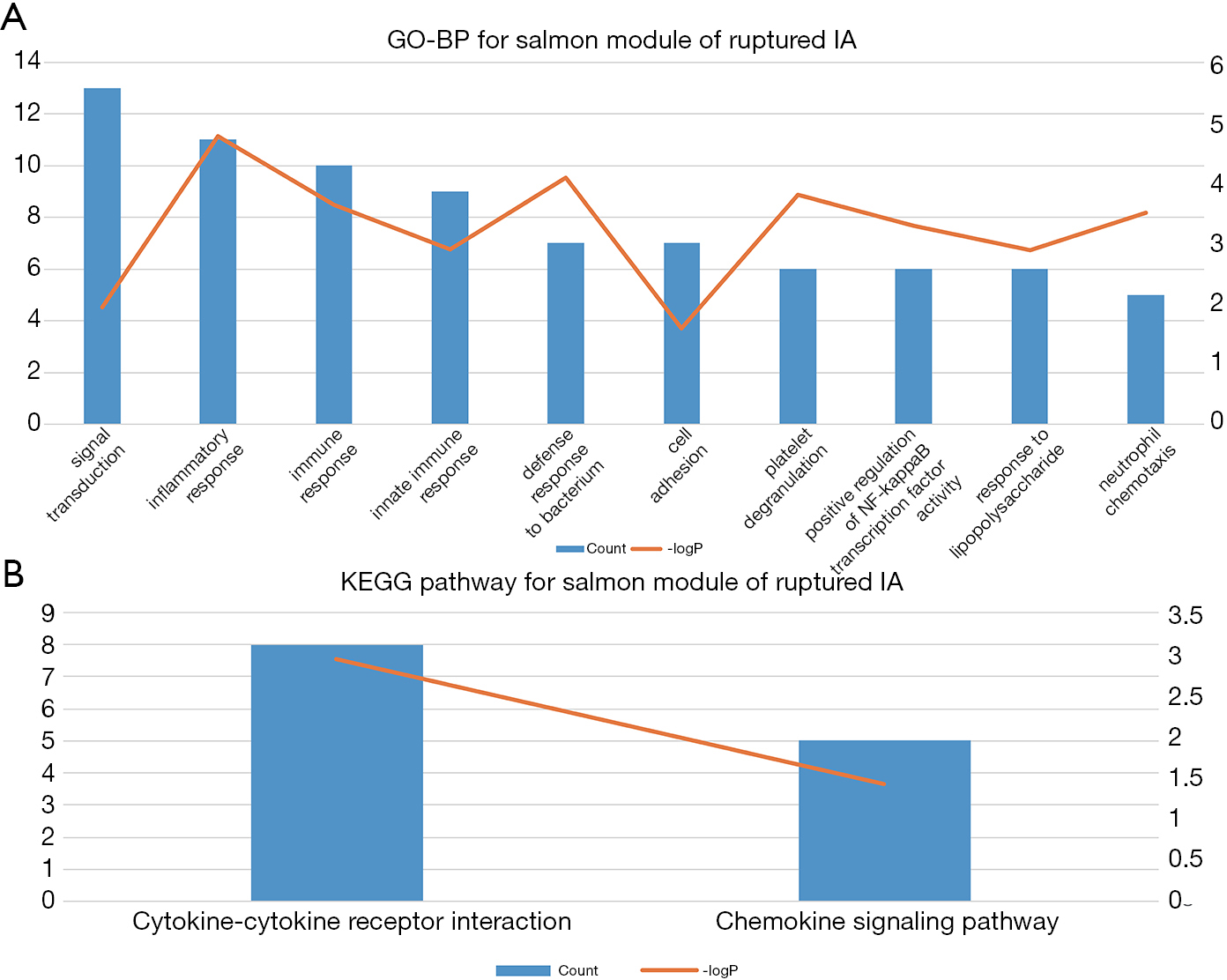 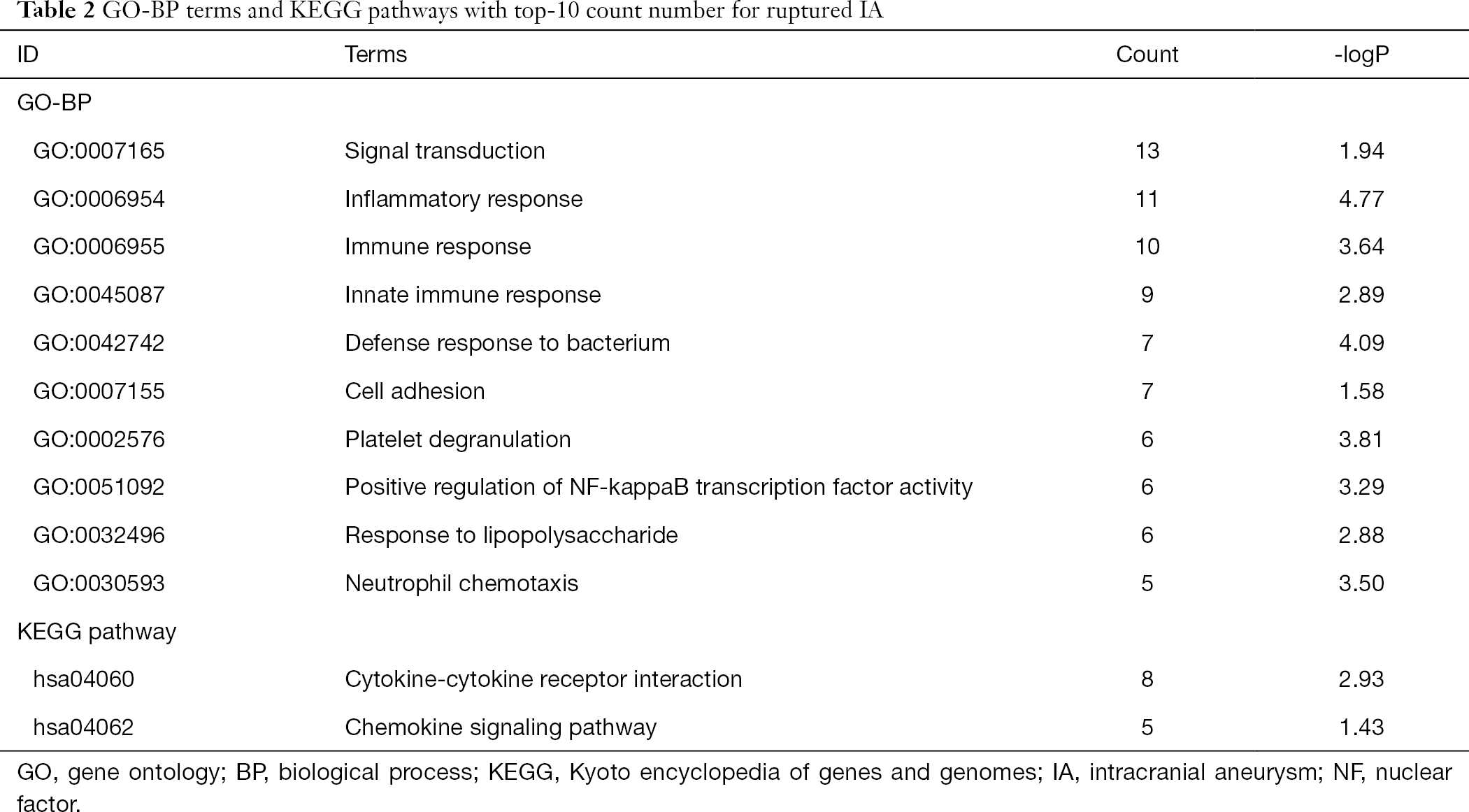 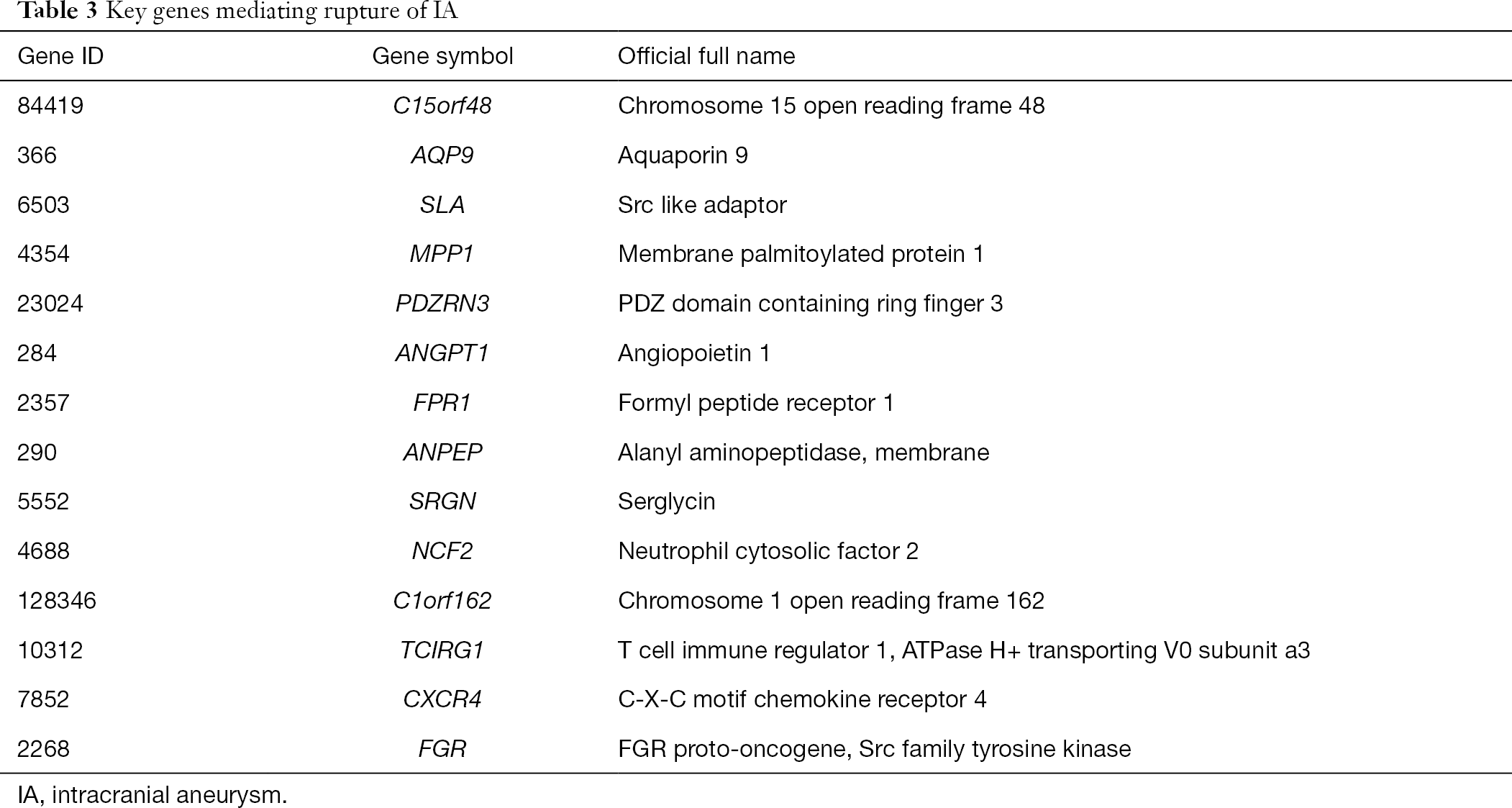 GSEA and validation of key genes

In the GSEA results for each key gene, we selected and visualized the significantly enriched gene sets with the highest normalized enrichment score (NES) value in each analysis (Figure 6). Most of the gene sets that we selected were associated with the inflammatory or immune responses, except for 3 gene sets, of which their related genes were MPP1, FPR1, and TCIRG1. 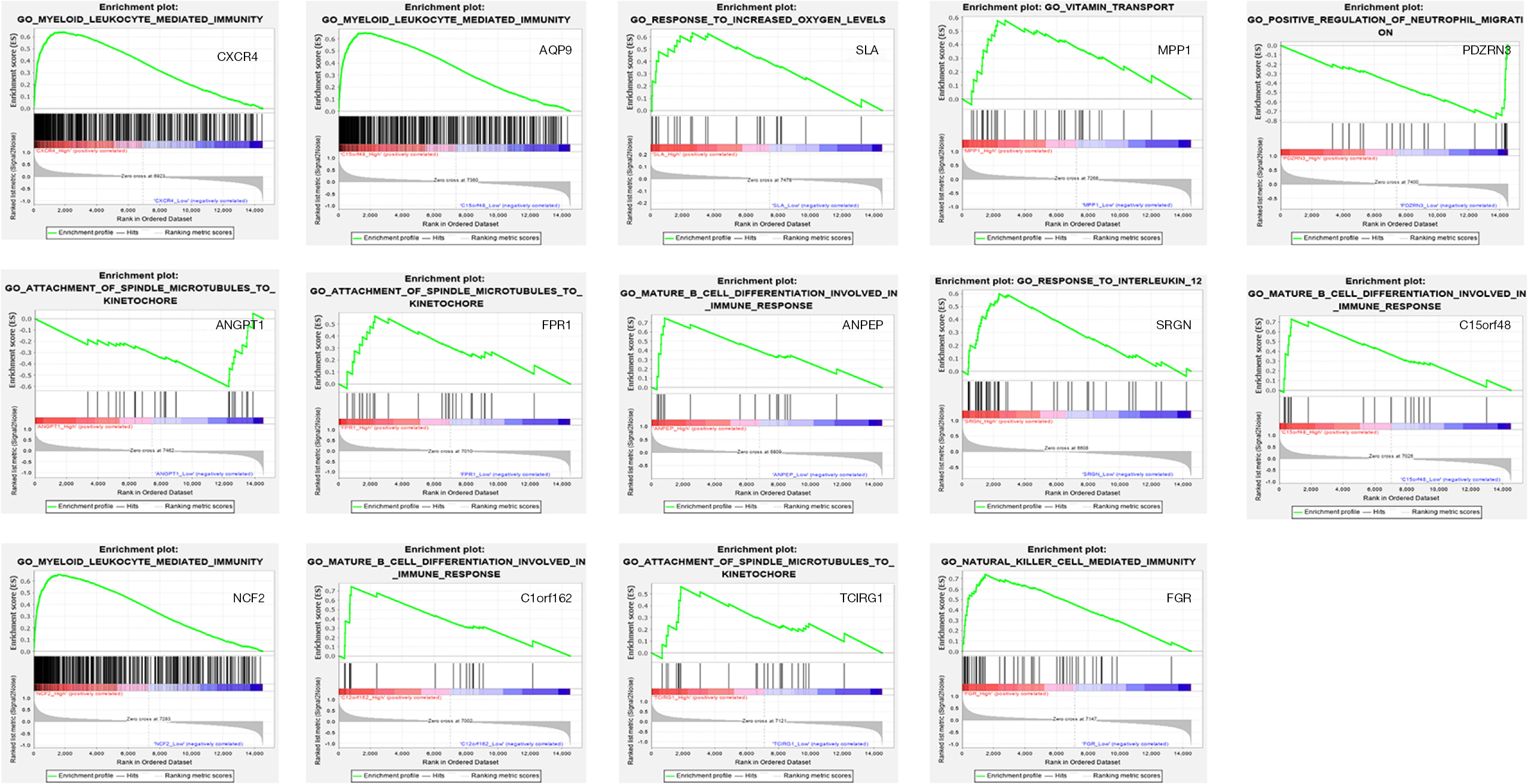 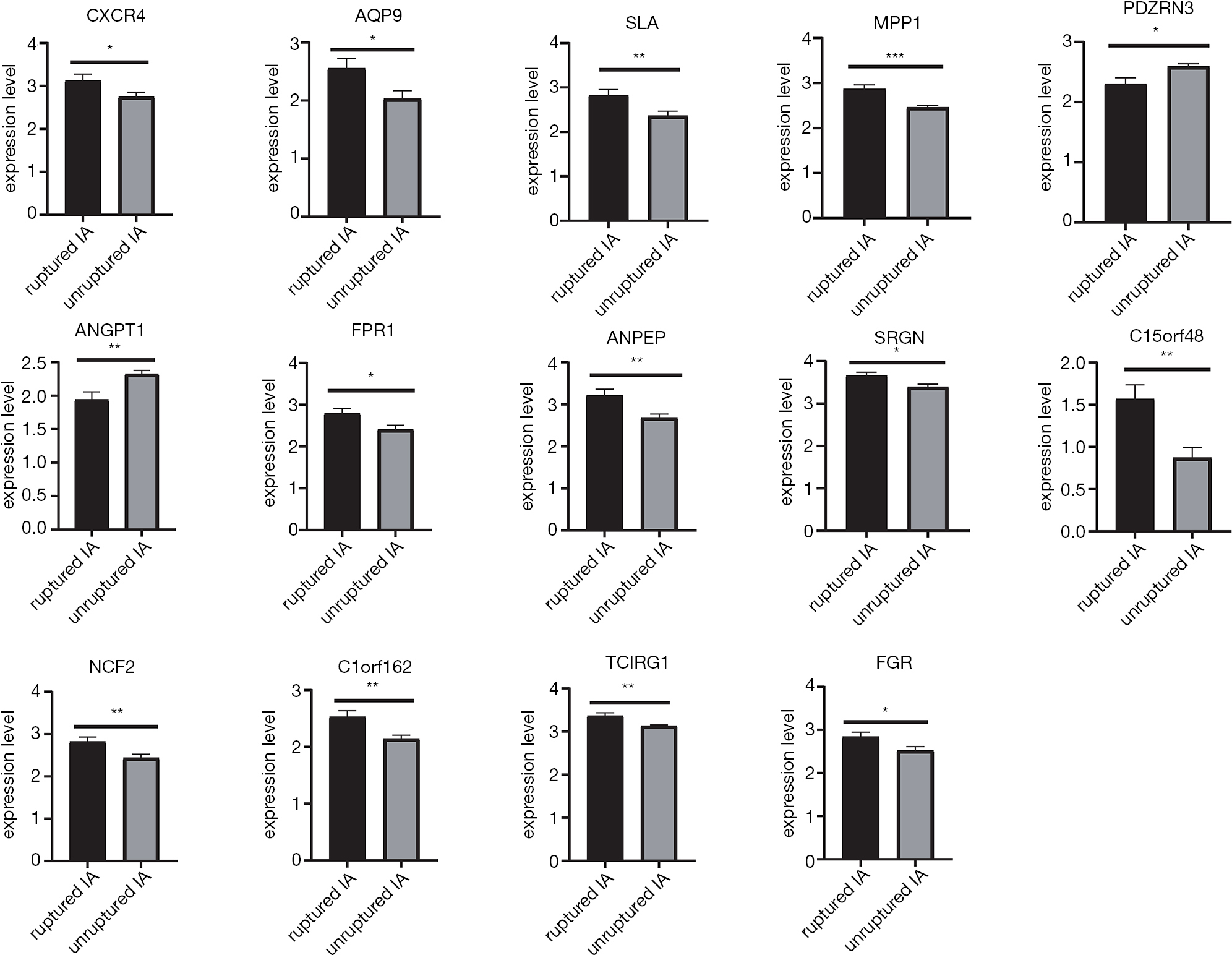 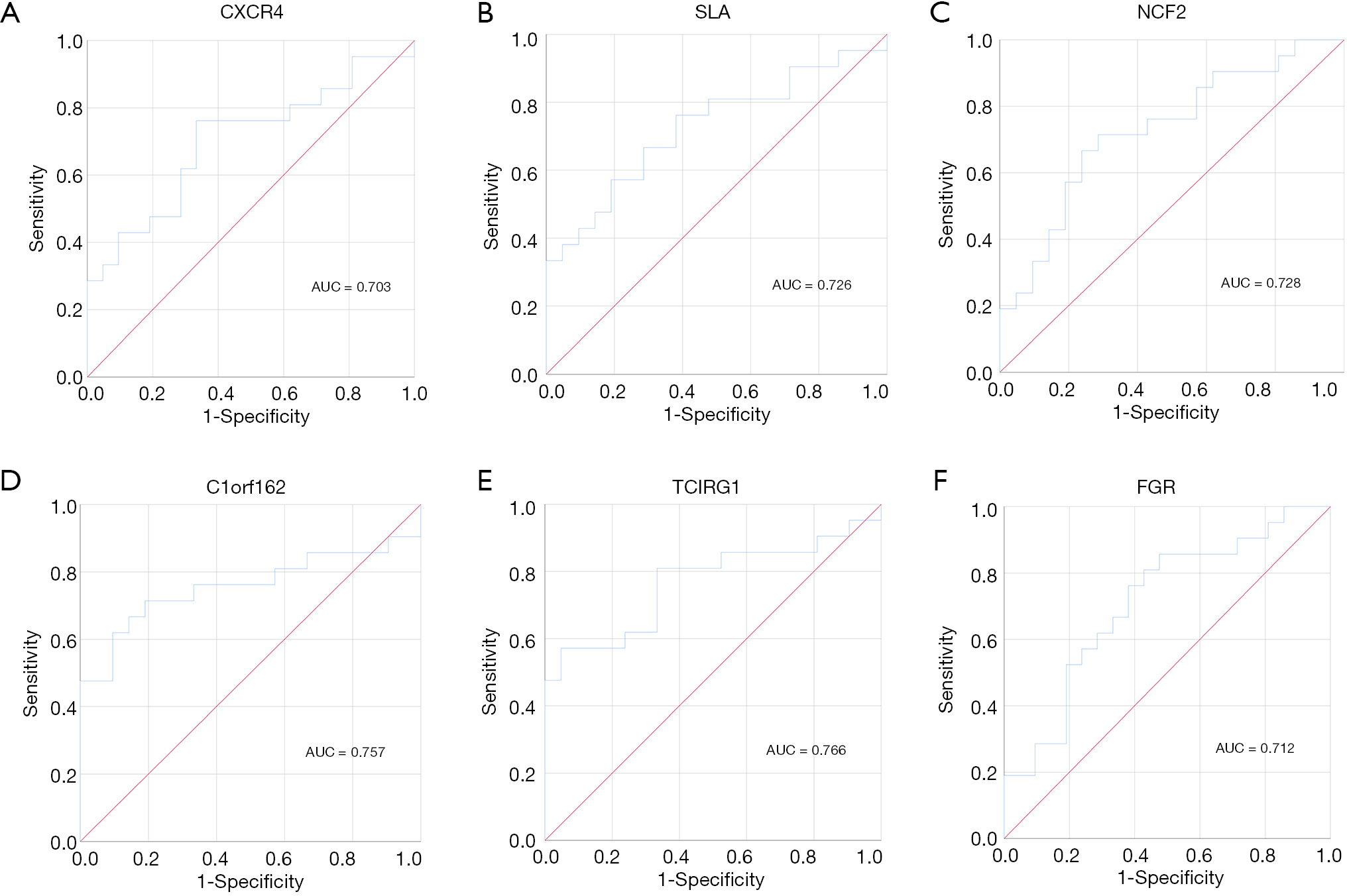 Kleinloog summarized the DEGs that were screened by their research and other previous studies. Almost all of the key genes in our study (except PDZRN3 and ANGPT1) were following the DEGs reported by the previous studies (22-26). However, some DEGs were not overlapping with DEGs in previous studies. The difference might be the result of the datasets selected, different thresholds, and different algorithms for the DEG screening.

Previous and recent studies have indicated that inflammatory and immune response played a critical role in the rupture of IA. Using high throughput data (mRNA microarray and RNA-seq), Kleinloog, Pera, and Nakaoka et al. discovered that inflammation and immune response participated in the rupture of IA (22,24,26). Inflammatory and immune cells such as macrophages, T, and B lymphocytes were also found to be potential mediators of IA rupture. Kataoka et al. observed significantly increased macrophage infiltration in ruptured human IA (27). In lymphocyte deficient and wild-type mice models, Sawyer et al. discovered that both the formation of IA and rupture of IA were significantly fewer in lymphocyte deficient mice compared with wild-type mice (28). Also, pro-inflammatory factors have critical roles in the progression of IA rupture. A well-known pro-inflammatory cytokine, TNF-α, can cause the weakening of arterial walls through downstream pathways associated with endothelial dysfunction, vascular smooth muscle phenotypic modulation, activating pro-inflammatory cells, and other mechanisms (29,30). Another inflammatory mediator, NF-κB, participates in both the formation and rupture of IA (31,32). Our finding that the pathways associated with inflammation and immune response were clustered in the salmon module of ruptured IA samples, and our GSEA results that inflammation and immune-related gene sets were up-regulated, were consistent with these previous and recent studies.

VNN2, also named GPI-80, was the hub gene in the salmon module of ruptured IA samples. It was first discovered on human neutrophils, and it regulates neutrophil adhesion and transendothelial migration (33,34). VNN2 was also found on a subpopulation of monocytes with a superior ability of reactive oxygen species production and phagocytosis (35). Being that neutrophils and monocytes are involved in inflammation and participate in the formation and rupture of IA (12,36,37), VNN2 might have potential roles in mediating IA rupture.

One of the widely studied chemokine receptors, CXCR4, was the gene with the highest degree in the key gene cluster. CXCR4 was firstly described as a G protein coupled-receptor that mediates the fusion of HIV-1 with host cells, and CXCL12 and SDF-1 were the specific ligands for CXCR4 (38-40). The signaling pathway of CXCR4 plays various roles in essential biological processes such as vascular development, cardiogenesis, hematopoiesis, and inflammation, among others (41).

Previous studies have described the association between CXCR4 and pathophysiology of the aneurysm. In mice models with carotid or IA, Hoh et al. found that expression of CXCR4 is increased in circulating progenitor cells, which may later differentiate into inflammatory cells (42). Besides, in the abdominal aortic aneurysm (AAA), research has shown that CXCR4 mediated aneurysmal progression, possibly through the inflammatory response. Michineau et al. found that SDF-1α and CXCR4 were up-regulated in CaCl2 induced AAA mice and that the block of CXCR4 by AMD3100 inhibited AAA formation and progression. They also observed decreased infiltration of macrophages along with decreased levels of pro-inflammatory factors such as MCP-1, IL-1β, and TNF-α (43). Another group discovered that CXCR4 was highly expressed in T/B lymphocytes and macrophages in AAA, also suggesting that CXCR4 promotes AAA formation and progression through the inflammatory response (44). Kodali et al. also found that metalloproteinase-2, implicated in aneurysm formation and progression, could be induced by SDF-1 via binding to CXCR4 (45). Our results that CXCR4 was the up-regulated key gene with the highest degree and inflammatory and immune response-related gene sets were up-regulated in the CXCR4 high group were consistent with these previous studies. Furthermore, CXCR4, as well as other key genes, also showed potential diagnostic values and might serve as biomarkers to predict IA rupture.

In our study, we constructed co-expression networks for ruptured IA and unruptured IA samples using 3 GEO datasets by WGCNA, detected gene modules, and identified key genes mediating the rupture of IA for the first time. Also, we conducted a GSEA analysis for the key genes and validated the key genes we identified using another GEO dataset. However, our study had some limitations. Due to the lack of detailed information about GEO datasets, it is difficult for us to associate the gene modules and key genes with clinical traits.

Our study revealed that the co-expression pattern between ruptured IA and unruptured IA was different. These findings implicated that the inflammatory and immune response might play important roles in IA rupture. The key genes that we identified in this study might have crucial biological functions in mediating rupture of IA.

Using a weighted gene co-expression network approach, we identified 8 and 6 modules for ruptured IA and unruptured IA, respectively. Next, we identified the hub genes for each module and the key genes based on the DEG co-expression network. These key genes were validated by another GEO dataset (GSE122897) and might serve as potential targets for pharmacological therapies and diagnostic markers for predicting IA rupture. Further studies are needed to elucidate the detailed molecular mechanisms and biological functions of these key genes that underlie the rupture of IA.

Funding: This work was supported by the Natural Science Foundation of China (81770481 and 51890894). The funders had no role in the study design, data collection, and analysis, decision to publish, or preparation of the manuscript.

Reporting Checklist: The authors have completed the MDAR reporting checklist. Available at http://dx.doi.org/10.21037/atm-20-4083

Conflicts of Interest: All authors have completed the ICMJE uniform disclosure form (Available at http://dx.doi.org/10.21037/atm-20-4083). The authors have no conflicts of interest to declare.

Ethical Statement: The authors are accountable for all aspects of the work in ensuring that questions related to the accuracy or integrity of any part of the work are appropriately investigated and resolved. The study was conducted in accordance with the Declaration of Helsinki (as revised in 2013). This study was not involved in the experiments of humans or animals. The raw datasets were available from the GEO database (http://www.ncbi.nlm.nih.gov/geo/; GSE13353, GSE15629, GSE54083 and GSE122897).