Retroperitoneal liposarcoma (RPLPS) is the most common retroperitoneal soft tissue sarcoma (RSTS), accounting for 20% of all soft tissue tumors (1-3). Primary RPLPS is a rare disease and surgery is the main mode of treatment. Recurrence of the tumor is the main impending issue, ultimately resulting in death. Local recurrence occurs in 70% of cases without exhibiting distant metastases (2). Although strategies to combat local recurrence are critical, the understanding of the cause of the primary disease still needs to be investigated and fully understood.

Here, patients undergoing primary and secondary treatment for RPLPS were analyzed to explore factors affecting the prognosis of this disease from multiple dimensions. We present the following article in accordance with the STROBE reporting checklist (available at http://dx.doi.org/10.21037/atm-20-6316).

A total of 90 RPLPS patients undergoing surgical treatment at the PLA General Hospital (Beijing, China) from December 1, 2006 to June 1, 2013 were analyzed in this study. There were 46 cases of primary RPLPS, and 44 cases showing their first local recurrence. All cases were confirmed by the pathology department in the hospital. The study was conducted in accordance with the Declaration of Helsinki (as revised in 2013). This study was approved by the Protection of Human Subjects Committee of the Chinese People’s Liberation Army (PLA) General Hospital. Informed written consent was provided by all participants included in the study.

Patient data included age, gender, tumor size, pathological classification, surgical method, intraoperative blood loss, adjuvant therapy, combined organ resection, and other pathological factors. All patients underwent computed tomography (CT), medical resonance imaging (MRI), or positron emission tomography (PET)/CT. For cases where imaging diagnosis was difficult, a preoperative biopsy was performed to remove all visible tumor. A negative resection margin was defined as R0 resection and a positive postoperative margin was considered a R1 resection [positive or close margins (<1 mm without intact fascia)]. If the tumor had invaded surrounding organs, combined organ resection was selected. However, if the tumor had invaded the blood vessels, a combined resection or ligation of the blood vessels was performed. A R2 (palliative) was considered if there was residual tumor observed during an operation.

All patients participated in follow-ups every 3–4 months for 1 year following surgery. After 1 year, these follow-ups were performed every 6 months for 2–5 years post-surgery, and every year beyond the 5 years post-surgery date. Death of the patient, or the follow-up date 1 January 2020 was the endpoint of the analysis. Follow-up visits included surveillance imaging (CT chest/abdomen/pelvis). If tumor recurrence was noted, a shortened follow-up interval of 3–4 months was performed. Overall survival (OS) was defined as the time from initial presentation of disease until death. Progression-free survival (PFS) was defined as the time from diagnosis to the first occurrence of disease progression or death (date of first recurrence for those who had an R0/R1 resection, date of progression of residual disease for those who had R2 resection, or death without evidence of recurrence or progression).

SPSS version 22.0 (IBM, Armonk, NY, USA) statistical software was used for data analysis. Clinical data of the PR and LR groups were compared using the Pearson’s chi-squared (χ2) or Wilcoxon-Mann-Whitney tests. The curves for OS and PFS were generated using the Kaplan-Meier method. Univariable and multivariable prognostic analyses were performed for OS and PFS to identify significant prognostic factors. Differences were considered statistically significant when P<0.05.

Among the 90 cases of RPLPS treated, 46 cases were diagnosed as primary retroperitoneal liposarcoma (PR RPLPS) and 44 cases were diagnosed as local recurrent retroperitoneal liposarcoma (LR RPLPS). Patient demographics and tumor characteristics are listed in Table 1. The median age of patients was 54 years (30–87 years), and there was a slightly higher population of men (58.9%) compared to women. The median tumor diameter was 19.5 cm (5–80 cm). All cases were classified according to the FNCLCC criteria. Compared to the PR group (41.3% of grade 1; 21.7% of grade 2; 37.0% of grade 3), there was an increased number of poorly differentiated and highly malignant cases in the LR group (18.2% of grade 1; 22.7% of grade 2; 59.1% of grade 3, P=0.042). 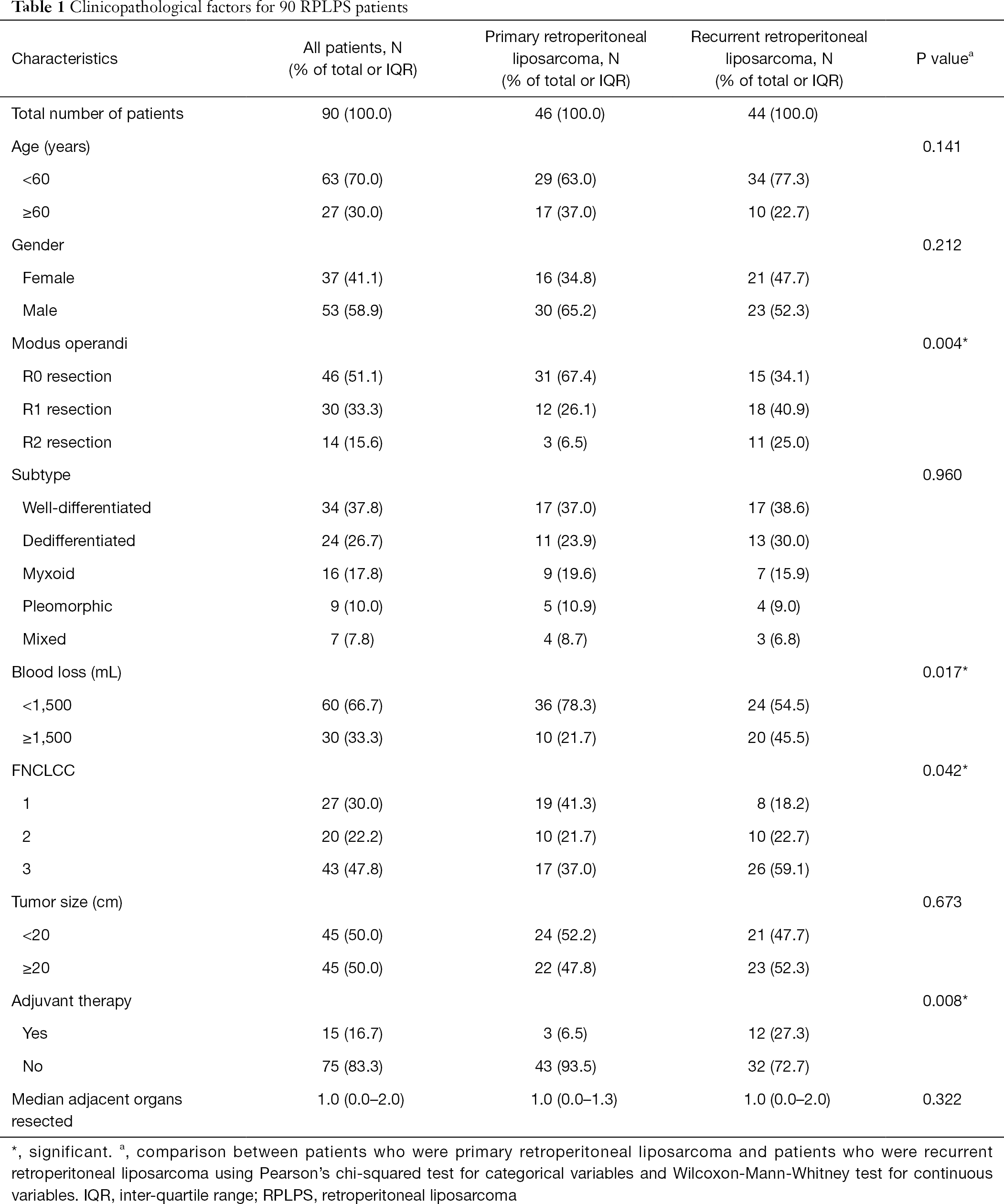 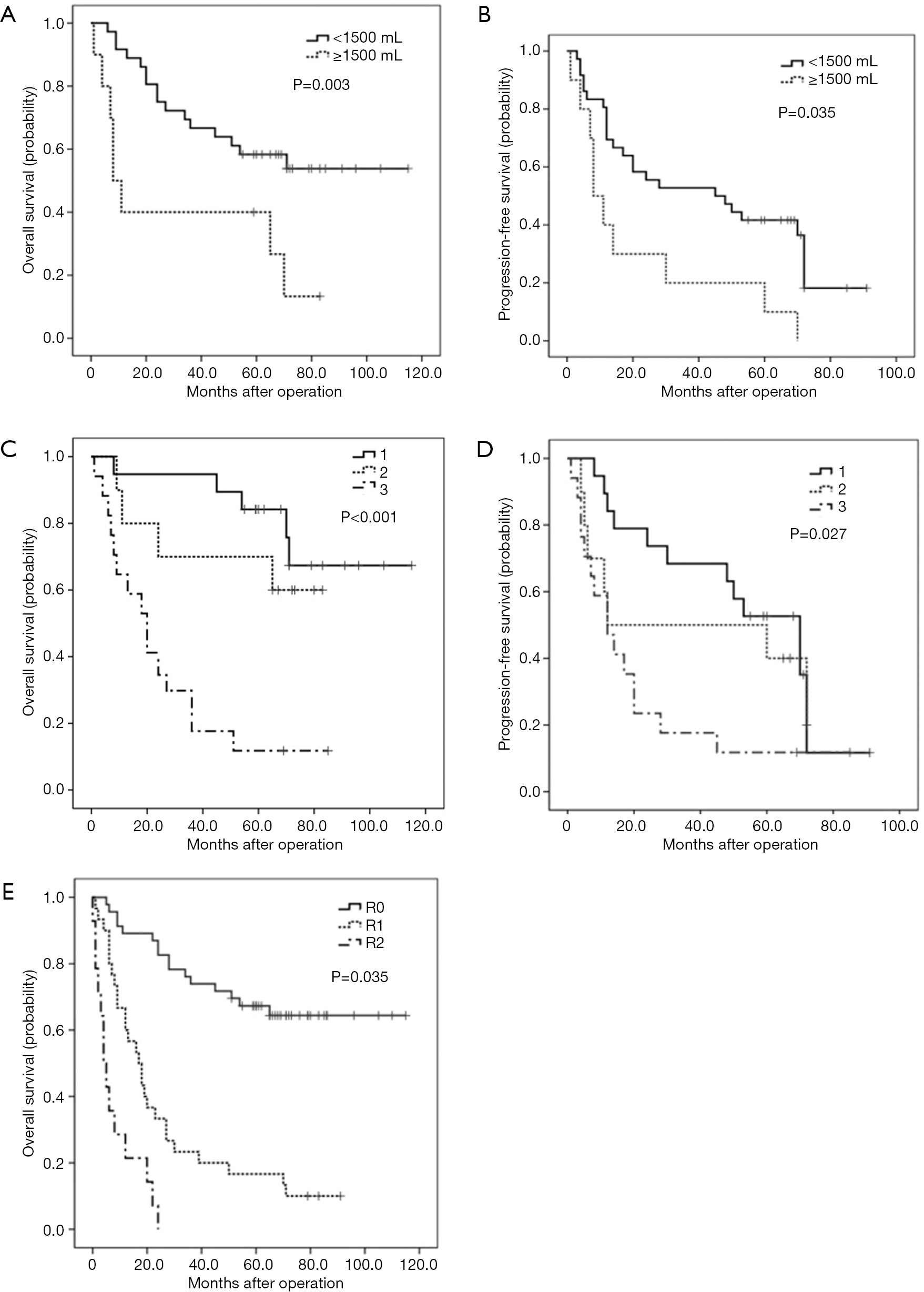 A continuous challenge is posed by RPLPS for diagnosis, prediction of clinical behavior, and treatment for disease recurrence within the intra-abdominal and retroperitoneal spaces. Due to the low overall incidence of this disease and variability between patients, little research has been undertaken to investigate RPLS in the Asian population (4-6).

Most patients diagnosed with RPLS have no obvious clinical symptoms in the early stage, and do not show signs until the tumor has enlarged and is causing symptoms. The relationship between tumor size and postoperative survival time remains controversial. Makela et al. believe that RPLPS is difficult to completely surgically remove, which affects survival time after surgery (7). In this study, patients with a tumor diameter ≥20 cm accounted for 50% of all cases (45/90). In the PR RPLPS group, there was no significant correlation between tumor size and survival prognosis. In the LR RLPPS group, the OS of patients with a tumor diameter ≥20 cm was significantly shorter than in patients with small tumor burden (P=0.024). However, this was not an independent risk factor for prognosis by multivariate analysis.

Patients with locally recurrent RPLPS are managed similarly to patients with primary RPLPS. Examination of suspected local recurrence requires abdominal CT, and sometimes MRI. Abdominal CT is not only the main preoperative diagnostic method, but also provides a basis for preoperative tumor classification (8,9). Examination with CT determines tumor invasion in surrounding organs, blood vessels, and other tissues, which is critical for pre-surgical analysis in order to properly perform R0 resection. In this study, the colon was the most commonly resected organ (32.2%), followed by the kidney (18.9%). We observed that combined organ resection did not directly affect survival after surgery, which is similar to what has been observed in previous work (10). The use of preoperative percutaneous biopsies in RPLPS patients is controversial (11,12). In cases where the diagnosis is not clear or the tumor is unresectable, biopsies can be used to confirm diagnosis and determine the histological type, providing additional information for adjuvant therapy.

Lehnert et al. retrospectively analyzed 110 RSTS patients and found that intraoperative bleeding >1,500 mL was an independent risk factor for poor postoperative survival (13). Luo et al. found that amongst retroperitoneal dedifferentiated liposarcoma (RP DDLPS) patients, higher levels of intraoperative bleeding predicted a poor survival prognosis [hazard ratio (HR) 3.302, 95% CI: 1.231–8.858, P=0.018] (14). In our study, univariate analysis revealed that intraoperative bleeding <1,500 mL indicated better OS and PFS, but the effect of multivariate analysis was not significant in PR RPLPS. Although resection of RPLPS was more difficult, and was associated with more bleeding (P=0.009), no significant correlation was found between the amount of bleeding and postoperative survival in LR RPLPS.

Generally, active surgical resection is recommended to ensure clean margins that can effectively improve OS for RSTS (15). However, for RPLPS cases, especially recurrent liposarcoma cases, the relationship between the marginal status and local recurrence is not clear. Zhao et al. suggest that a negative resection margin is associated with a reduction in local recurrence rate (HR =0.18, P=0.001), and improved disease-specific survival (HR =0.14, P<0.001) (6). Keung et al. reported that 119 RP DDLPS cases showed no significant relationship between resection margin status and local recurrence (16). Univariate analysis of our study showed that surgical marginal status significantly affected OS and PFS, and multivariate analysis showed an R2 resection (as compared to an R0 resection) was associated with an increased risk for OS (PR RPLPS: HR 6.89, P=0.014; LR RPLPS: HR 10.51, P=0.000). The association of margin size on oncologic outcomes for RPLPS is based on limited data and varying opinions on the definition of a positive margin.

Previous studies (17,18) have confirmed that histological grade is an important prognostic factor for retroperitoneal tumors, but relatively few studies have targeted liposarcomas, especially those that are recurrent. Zhao et al. suggest that low-grade RPLP tumors are significantly associated with a reduced risk of local recurrence and improved survival (6). Among the 119 cases of RP DDLPS studied by Keung et al., participants with intermediate grade RP DDLPS showed a better prognosis than those with high grade RP DDLPS (16). Altogether, these results support the FNCLCC classification (19), where differences between grade 1 and 3 tumors significantly affect OS and PFS, regardless of whether the tumors are primary or recurrent.

Due to the heterogeneity of tumor tissue, different tissue types often predict survival time (2,20). A study by Gronchi et al. showed that myogenic differentiation significantly predicted the outcome of RPLPS (21). Despite that in this study, tumor histological type is not an independent risk factor for survival time after surgery, it is worth noting that transformation from retroperitoneal well-differentiated liposarcoma (RP WDLPS) to RP DDLPS occurs where there is an evolution of mutations following each recurrence (3). These mutations may also result in changes in tumor grade and affect patient survival. Therefore, the impact of different tumor histological types on the prognosis of RPLP requires further research.

Although surgery is considered the most effective treatment for RPLPS, some studies have also tried new adjuvant treatments. These studies have shown that preoperative neoadjuvant radiotherapy can prolong the survival of RPLPS, especially in patients with high-risk pathological types (22), and reduce the possibility of local recurrence (23). The MD Anderson Cancer Center reported that combined chemotherapy in patients with RP DDLPS produced a response rate of 24% (24). On account of new adjuvant treatment methods not having yet been widely clinically practiced, they are given to refractory or complicated liposarcoma cases. Thus, we did not discuss adjuvant treatment for the typical RPLPS case in our work.

We would like to thank all the investigators, surgeons, and patients who participated in this study.

Funding: This study was supported by the National Natural Science Foundation of China (NSFC 81871317) and the Technology Innovation Nursery Fund (16KMM15) of the Chinese PLA General Hospital.

Reporting Checklist: The authors have completed the STROBE reporting checklist. Available at http://dx.doi.org/10.21037/atm-20-6316

Conflicts of Interest: All authors have completed the ICMJE uniform disclosure form (available at http://dx.doi.org/10.21037/atm-20-6316). The authors have no conflicts of interest to declare.

Ethical Statement: The authors are accountable for all aspects of the work in ensuring that questions related to the accuracy or integrity of any part of the work are appropriately investigated and resolved. The study was conducted in accordance with the Declaration of Helsinki (as revised in 2013). This study was approved by the Protection of Human Subjects Committee of the Chinese People’s Liberation Army (PLA) General Hospital. Informed written consent was provided by all participants included in the study.