Differential diagnosis of Marfan syndrome based on ocular biologic parameters

Marfan syndrome (MFS) is a severe, autosomal-dominant inherited disease with a prevalence of 1/5,000–1/10,000 (1,2). The leading cause of MFS is thought to be a fibrillin-1 (FBN1) mutation, which usually causes pathological changes in FBN1 in connective tissues and induces an inherited disorder involving several systems, including the cardiovascular and skeletal systems (3,4). The ocular manifestations can be lens subluxation, or they may be associated with other ocular abnormalities, including high myopia, secondary glaucoma, and retinal detachment. MFS is also accompanied by skeletal system disorders, including arachnodactyly, pectus carinatum, and scoliosis (5). Lesions involving connective tissue, particularly in the cardiovascular system, causing mitral valve insufficiency, artery dilation, and aortic aneurysms, can be fatal (6,7). Early intervention is critical because of the life-threatening complications associated with MFS. A previous study showed that losartan, which is generally used for the treatment of hypertension, has the potential to prevent the significant life-threatening manifestations of MFS (8). Regarding ocular disorders, surgery has become the principal treatment for severe ectopia lentis; auxiliary instruments, such as capsular tension rings, have shown promise in visual rehabilitation (9).

The 2010 Revised Ghent Criteria are the gold standard criteria for the diagnosis of MFS (10); the main diagnostic items are as follows: (I) FBN1 gene test; (II) ectopia lentis; (III) the cardiac score; and (IV) the systemic score. Of these four items, gene testing is the most important criteria. However, according to a survey conducted by the Zhongshan Ophthalmic Center, Chinese patients and their parents have low acceptance of genetic testing (11). Furthermore, most cardiovascular complications appear late and usually do not show significant clinical symptoms in young patients with ectopia lentis. Therefore, it is difficult for ophthalmologists to make a differential diagnosis of MFS from with ectopia lentis according to the 2010 Revised Ghent Criteria.

We have observed that, of all MFS symptoms, lens dislocation is usually the most common and easily observed; therefore, patients often consult ophthalmologists first. Even though much attention has been paid to the clinical manifestations and progression of ectopia lentis (12,13), and several previous studies showing that the ocular parameters of MFS patients differ from those of normal controls and that they have particular characteristics (14,15), it remains unknown as to whether these parameters could be used for the differential diagnosis of MFS from ectopia lentis (16,17). Ocular examinations are much cheaper and more acceptable than those mentioned above. If ocular biologic parameters could be used to differentiate MFS from ectopia lentis, this would benefit both patients and clinicians. Therefore, the present study aimed to determine the potential value of biologic parameters in the differential diagnosis of MFS from ectopia lentis. We present the following article following the TRIPOD reporting checklist (available at http://dx.doi.org/10.21037/atm-20-1069).

The present case-control study was conducted at the Zhongshan Ophthalmic Center, Sun Yat-sen University, Guangzhou, China. The study was conducted following the Declaration of Helsinki (as revised in 2013) and was approved by the Institutional Board of Zhongshan Ophthalmic Centre of Sun Yat-sen University (IRB-ZOC-SYSU). Informed consent was obtained from all the participants.

A total of 103 patients (103 eyes) patients with congenital lens dislocation were recruited from Zhongshan Ophthalmic Center of Sun Yat-sen University during July 2017 and June 2019. Of these, 52 patients were diagnosed with MFS based on the Ghent-2 criteria (Table S1). A total of 51 age- and sex-matched patients with ectopia lentis who did not meet the Ghent diagnostic criteria were selected as non-MFS patients. The right eye of each patient was selected for subsequent analyses.

All FBN1 gene variants of sequencing data were selected and screened using the following steps: (I) variations with a frequency >0.01 in the 1,000 Genomes Project and ExAC database were excluded; (II) synonymous variations or non-coding region variations that did not affect splicing were excluded; (III) 9 bioinformatics analysis software platforms (Polyphen2_HVAR, SIFT, LRT_pred, Polyphen2_HDIV, MutationTaster, MutationAssessor, MetaSVM, MetaLR, and FATHMM) were used to predict amino acid substitutions that would change the structures of proteins and affect their functions; and (IV) GERP++_RS software and PhyloP software were used to analyze the conservation of variations. A variation was considered a candidate pathogenic mutation when the result of damage or probability damage in >3 of the 9 software platforms and 2 conservative analysis software platforms found a variation-conservative missense variation. Sanger sequencing was performed to confirm the mutation, and SWISS-MODEL software was used to predict the structure of the abnormal protein.

Quantitative data with normal distribution were described as mean ± standard deviation (SD); t-tests were performed for intergroup comparisons. The value of biologic parameters in the differential diagnosis of MFS was analyzed using the receiver-operating characteristic (ROC) curve of patients. The test level was set at α=0.05; P<0.05 was statistically significant. All statistical analyses were performed using SPSS version 22.0 (IBM, Armonk, NY, USA).

Demographic characteristics and ocular parameters of all included patients

ROC curves of ocular parameters about the diagnosis of MFS

To explore the potential value of biologic parameters in the differential diagnosis of MFS, parameters with positive statistical significance between MFS and non-MFS were further analyzed using ROC curves. As shown in Figures 1,2, the ROC curve indicated that Km, CCT, and AL were able to discriminate between MFS and non-MFS. The area under the ROC curve (AUROC) was 0.761 for AL, 0.736 for Km, 0.713 for CCT, 0.825 for the combination of Km and CCT, 0.807 for the combination of Km and AL, and 0.816 for the combination of CCT and AL; Km of 41.36 D and CCT of 537.32 mm were found to be the optimal cut-off points, representing a sensitivity of 89.8% and specificity of 68.7%. 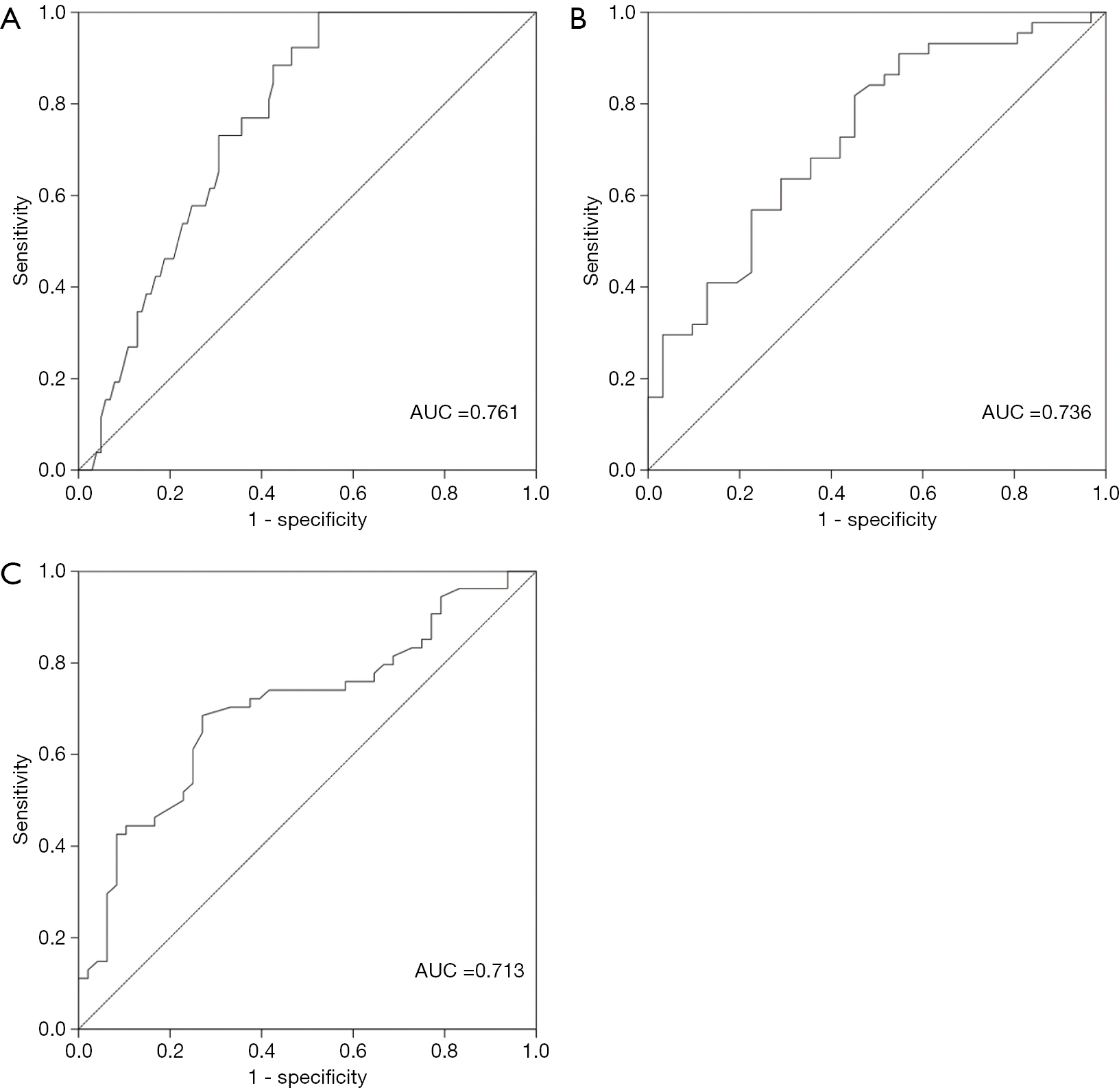 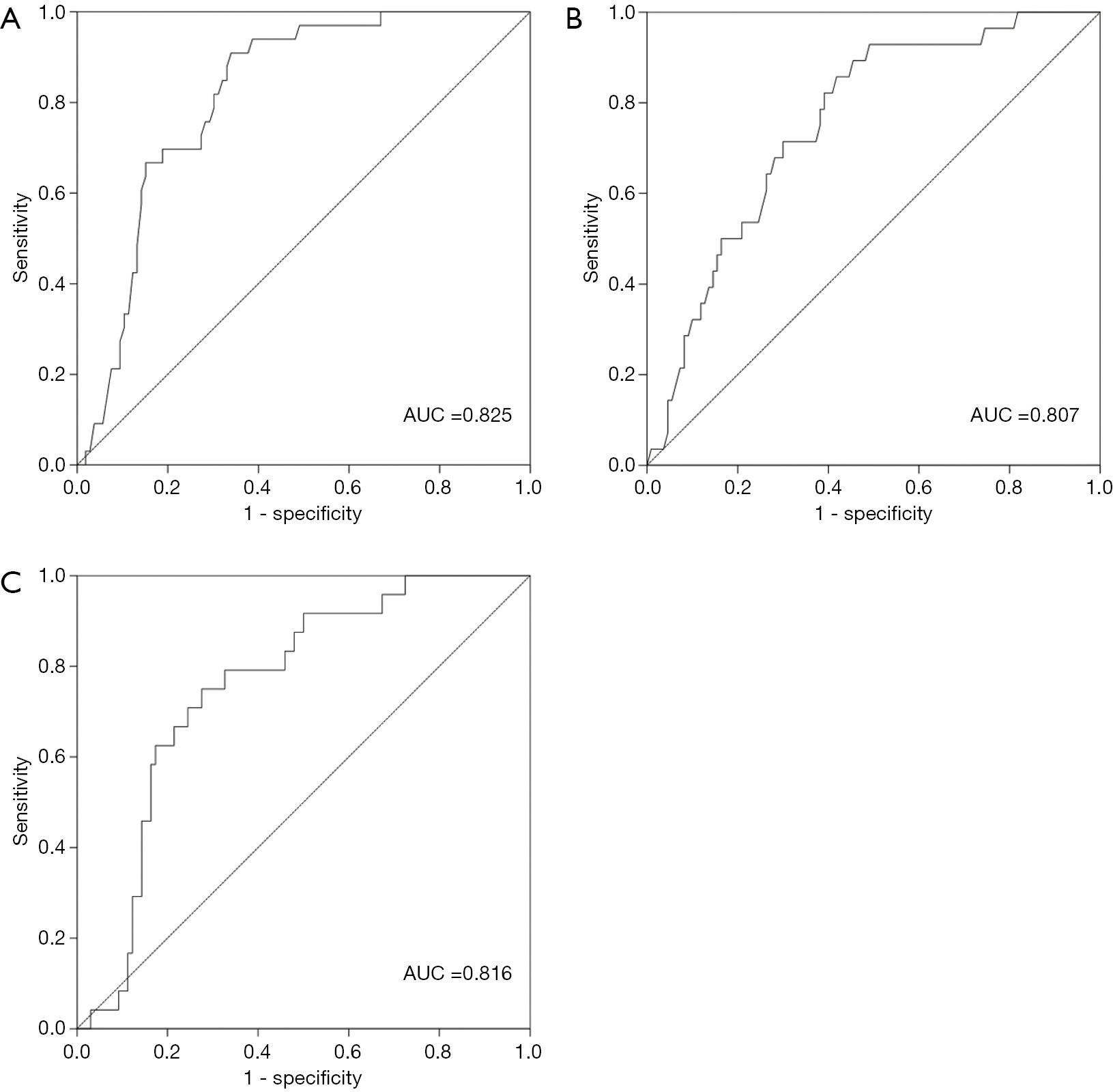 Previous studies have suggested that MFS is associated with distinctive clinical ocular manifestations, including AL enlargement, corneal flattening, reduced CCT, and ectopia lentis (18,19). Several studies have confirmed these biometric characteristics over the past 30 years (20,21). In the current study, we investigated the characteristics of ocular parameters in MFS patients and found increased AL and decreased Km and CCT. Ocular biologic parameters are essential for the differential diagnosis of MFS from ectopia lentis; Km combined with CCT could be used as a screening tool for MFS.

A recent study showed that more than half of Chinese patients and their families do not accept genetic testing. The reasons for this include its high cost and lack of evidence regarding its safety (11). Because ocular parameters are different between MFS and non-MFS patients, it is necessary to investigate the potential values of this biologic information when making a differential diagnosis of MFS from ectopia lentis, especially considering that the measurement of biologic parameters is a non-invasive, cheaper, and safer method compared with genetic testing. As seen in Figures 1,2, Km, CCT, and AL had potential diagnostic value for MFS patients, further confirming the different characteristics between MFS and non-MFS patients reported in previous studies (14,24). Our findings suggest that, for patients with congenital lens dislocation, those with AL >26.33 mm and/or Km <41.36 D, and/or reduced CCT <537.32 mm, are at high risk of MFS. When combining Km and CCT, Km of 41.36 D and CCT of 537.32 mm were found to be optimal cut-off points (AUROC: 0.825, sensitivity: 89.8%, specificity: 68.7%). These results are consistent with those of a previous study that included 55 Chinese MFS patients. The findings of that study suggested that patients with lens dislocation had Km <41.35 D, which indicates the diagnostic value in the differential diagnosis of MFS from ectopia lentis (AUROC: 0.85, sensitivity: 84.9%, specificity: 70.9%) (28). Considering the special characteristics and good sensitivity and specificity of the ocular parameters in MFS diagnosis, ocular parameters are valuable in the differential diagnosis of MFS from ectopia lentis and should be given more attention.

Although the current study had a relatively large sample size for a rare disease, ectopia lentis, there were some limitations. First, the sensitivity and specificity of the MFS diagnostic test might not apply to different populations due to racial differences. Second, although the sample size was quite large, and patients came from different provinces of China, the single-center design of the current study limits the generalization of our conclusions to some extent.

We recommend that Km and CCT, which are acceptable and easily performed for ectopia lentis patients, be considered as the first screening tools in the differential diagnosis of MFS from ectopia lentis. Another benefit of these quick and simple screening tools is that genetic testing can be performed in more targeted patients to avoid unnecessary invasiveness and high costs. Nevertheless, this is not intended to diminish the significance of genetic testing, because genetic testing is not only very helpful for the differential diagnosis of MFS from ectopia lentis, but can also be used for investigating other conditions.

In summary, we identified special characteristics of ocular parameters in MFS patients, including longer AL, flatter Km, and reduced CCT. The current study provides new evidence, suggesting that ocular parameters are not only sensitive but also specific, in the differential diagnosis of MFS from ectopia lentis.

Reporting Checklist: The authors have completed the TRIPOD reporting checklist. Available at http://dx.doi.org/10.21037/atm-20-1069

Conflicts of Interest: All authors have completed the ICMJE uniform disclosure form (available at http://dx.doi.org/10.21037/atm-20-1069). The authors have no conflicts of interest to declare.

Ethical Statement: The authors are accountable for all aspects of the work in ensuring that questions related to the accuracy or integrity of any part of the work are appropriately investigated and resolved. The study was conducted in accordance with the Declaration of Helsinki (as revised in 2013). The study was approved by the Institutional Board of Zhongshan Ophthalmic Centre of Sun Yat-sen University (IRB-ZOC-SYSU) and informed consent was taken from all the participants.