Diabetes accounts for 30–50% of chronic kidney disease (CKD) and the proportion is increasing rapidly (1). Renal inflammation is involved in the pathogenesis and progression of diabetic nephropathy (DN) (2-5). Mannose-binding lectin (MBL) is a natural immune soluble medium that was shown to be involved in the development of DN (6,7). Zheng et al. reported that MBL might act in the activation of the complement mediated renal interstitial injury (8). Li et al. found that MBL and factor Bb levels in serum and urine were correlated with the severity of DN (9). Also, MBL deposit was found in renal pathology in patients with type 2 diabetes mellitus (DM) in different populations (10).

In this study, we aimed to determine whether MBL contributes to the progression of DN and to identify its correlation with the endpoint of end-stage renal disease (ESRD) in DN patients; single nucleotide polymorphisms (SNPs) of MBL2 gene were also studied. We present the paper in accordance with the STROBE reporting checklist (available at http://dx.doi.org/10.21037/atm-20-1073).

We enrolled 77 type 2 DM patients who were admitted into our center from August 2013 to September 2016. All of them received a renal biopsy, and serum and urine sample acquisition at the time of renal biopsy. This retrospective cohort study has adhered to the STROBE guidelines for cohort studies. The diagnosis of type 2 DM or DN was according to the criteria proposed by the American Diabetes Association (ADA) in 2017 (11) or the criteria by the Renal Pathology Society (RPS) in 2010 (12), respectively. Patients complicated with other kidney diseases, active infections, severe liver dysfunction, under immunosuppressive therapy, kidney allograft recipients, reaching ESRD before renal biopsy, with incomplete baseline data, or lost in follow-up were excluded. The flow chart is shown in Figure 1. The number of cases during the study period determined the sample size. The research protocols were conformed to the provisions of the Declaration of Helsinki (as revised in 2013) and were approved by the Ethics Committee of the First Affiliated Hospital of Medical School of Zhejiang University (No. 2017243). All patients were informed consent.

Figure 1 The flow chart of the patient recruitment in this study. MBL, mannose-binding lectin.

The baseline characteristics of the patients including the demographic data, physical examination, the comprehensive chemical panel on the day of the renal biopsy were collected from the hospital information system. We kept following up each patient until a confirmed ESRD or the last follow-up time of August 31, 2018. The data on outcomes was obtained from outpatient medical records, the website of Zhejiang Medical Quality Control and Evaluation for Dialysis, and telephone follow-ups. ESRD was defined as an estimated glomerular filtration rate (eGFR, calculated by CKD-EPI formula) lower than 15 mL/min/1.73m2 or requirement of renal replacement therapy.

Blood and urine samples were collected on the same day of renal biopsy. Serum and blood mononuclear cells were separated and stored in aliquots at −80 °C until usage. Serum samples for complement measurement were thawed at room temperature for 1 hour, and then centrifuged at 3,500 rpm for 5 min at 4 °C in a Thermo ScientificTM HeraeusTM MultifugeTM X1 Centrifuge (ThermoFisher Scientific, Rockford, IL, USA).

Serum or urine MBL levels were measured by enzyme linked immunosorbent assay (ELISA). Commercial ELISA kits (R&D Systems, USA) were used according to the manufacturer’s instructions. Samples were thawed rapidly at 37 °C and then kept on ice before measuring to ensure no additional complement activation. Repeated freeze-thaw cycles were avoided.

Each biopsy was routinely processed for light microscopy, immunofluorescence, and electron microscopy. The pathological classification and scores were evaluated based upon the 2010 RPS criteria. Renal pathological findings were categorized by glomerular lesions (I, IIa, IIb, III, IV), interstitial fibrosis and tubular atrophy (IFTA) [0, 1, 2, 3], interstitial inflammation [0, 1, 2] and arteriosclerosis [0, 1, 2].

Cell samples were thawed, transferred to ethylenediaminetetraacetic acid (EDTA) tubes, remained at room temperature for 30 min, and then centrifuged at 3,500 rpm for 5 min at 4 °C in a Thermo ScientificTM HeraeusTM MultifugeTM X1 Centrifuge (Thermo-Fisher Scientific, Rockford, IL, USA). The supernatant was disposed with erythrocyte lysis and then centrifuged again at 3,500 rpm for 10 min to collect blood mononuclear cells.

SNPs in the MBL2 gene are associated with variation in quantity and/or function of serum MBL. The polymorphism is determined by the co-occurrence of three promoter variants (H/L, rs11003125; X/Y, rs7096206; and P/Q, rs7095891) and one exon 1 variant (B, rs1800450) (13). DNA from DN patients was sequenced using the sanger two-way sequencing (model 3730; Applied BioSystems). Primer sequences for MBL2 were forward primer (5'-GTTTTCTAATTGCCAGTGG-3') and reverse primer (5'-CAAATAGGACATCAGTCTCC-3').

All statistical analyses were performed with SPSS software, version 19.0 (SPSS Inc., Chicago, IL, USA). The figures were constructed by MedCalc, version 15, or GraphPad Prism 8. The results were expressed as means with standard deviation (SD) for normally distributed continuous variables, median values (interquartile ranges, IQR) for non-normally distributed continuous variables, or frequencies and percentages for categorical variables. The unmeasured results were regarded as deficiency. The patients lost to follow-up were excluded in this retrospective cohort study. Student’s t-test for independent samples was used for comparisons of normally distributed continuous variables. Comparisons of non-normally distributed continuous variables were performed using Mann-Whitney U-test. The Chi-square test was used for categorical variables. The receiver operating characteristic (ROC) curves were used to analyze predictors for ESRD, and the cut-off value was calculated by the maximum of the Youden index (sensitivity + specificity-1). The renal survival was established by Kaplan-Meier curves, and differences in survival rates were assessed with the log-rank test. The risk factors for ESRD were examined via Cox proportional hazards models. Variables statistically significant in univariate analyses entered into multivariate Cox models. A P value <0.05 was considered statistically significant. 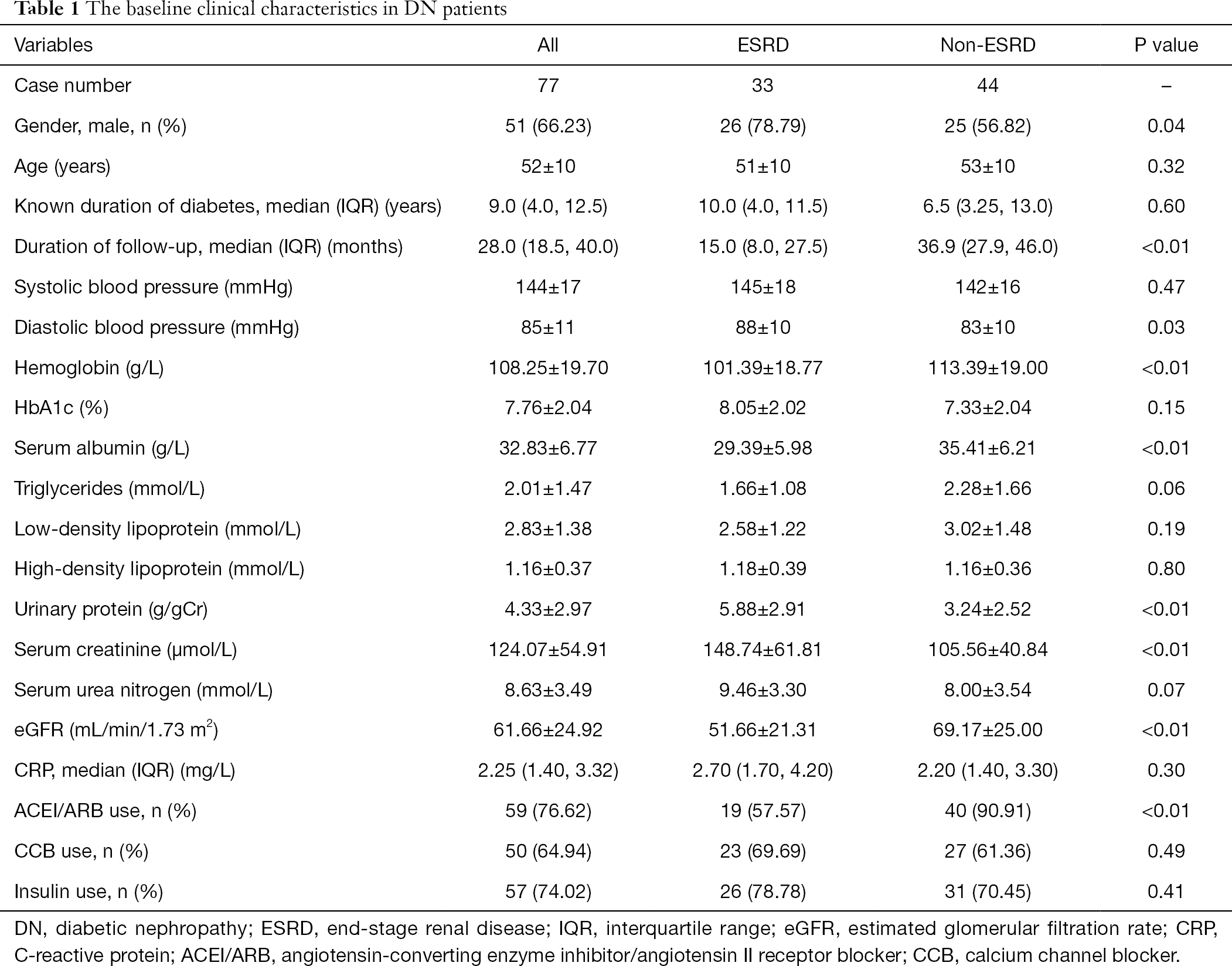 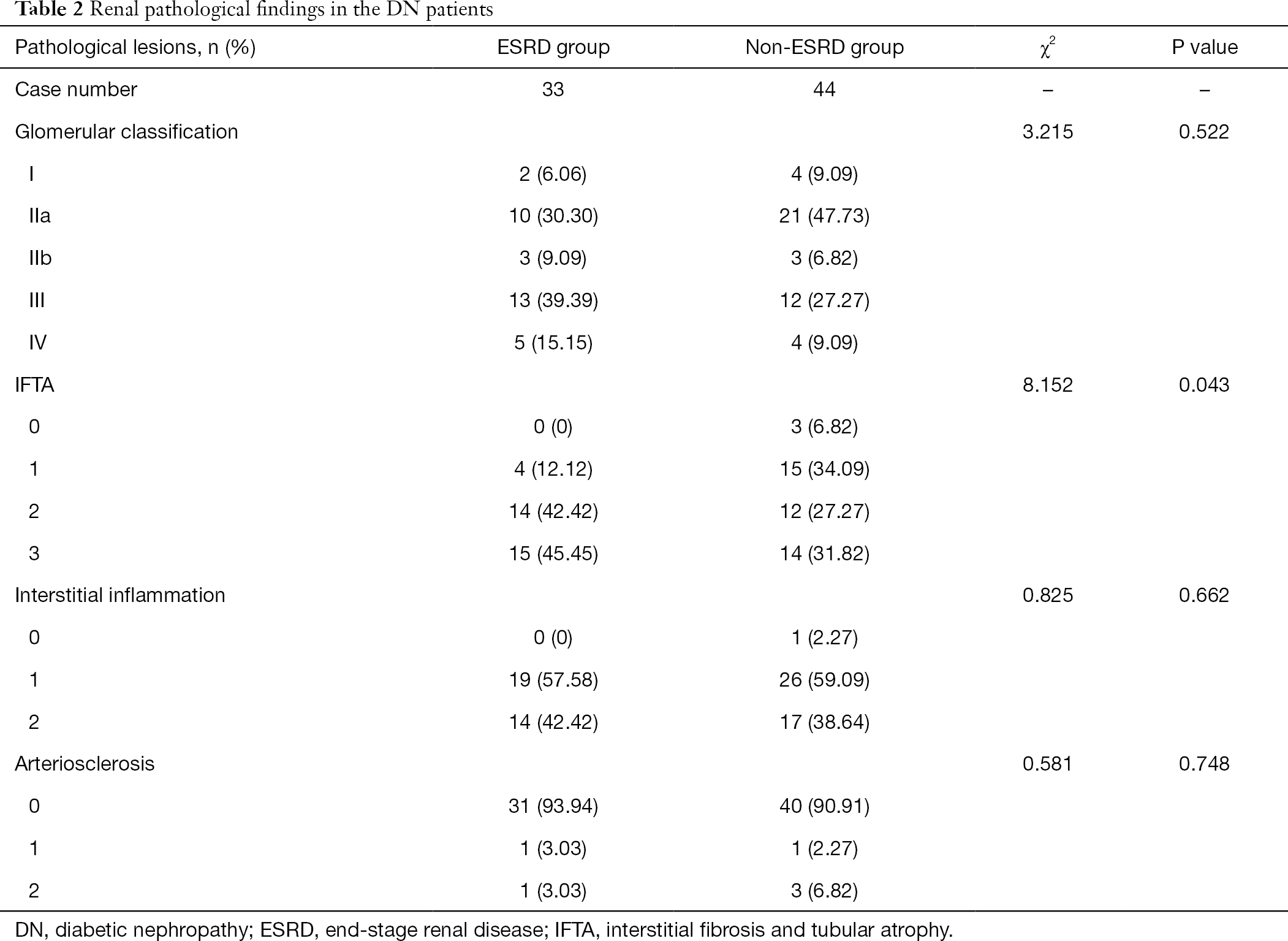 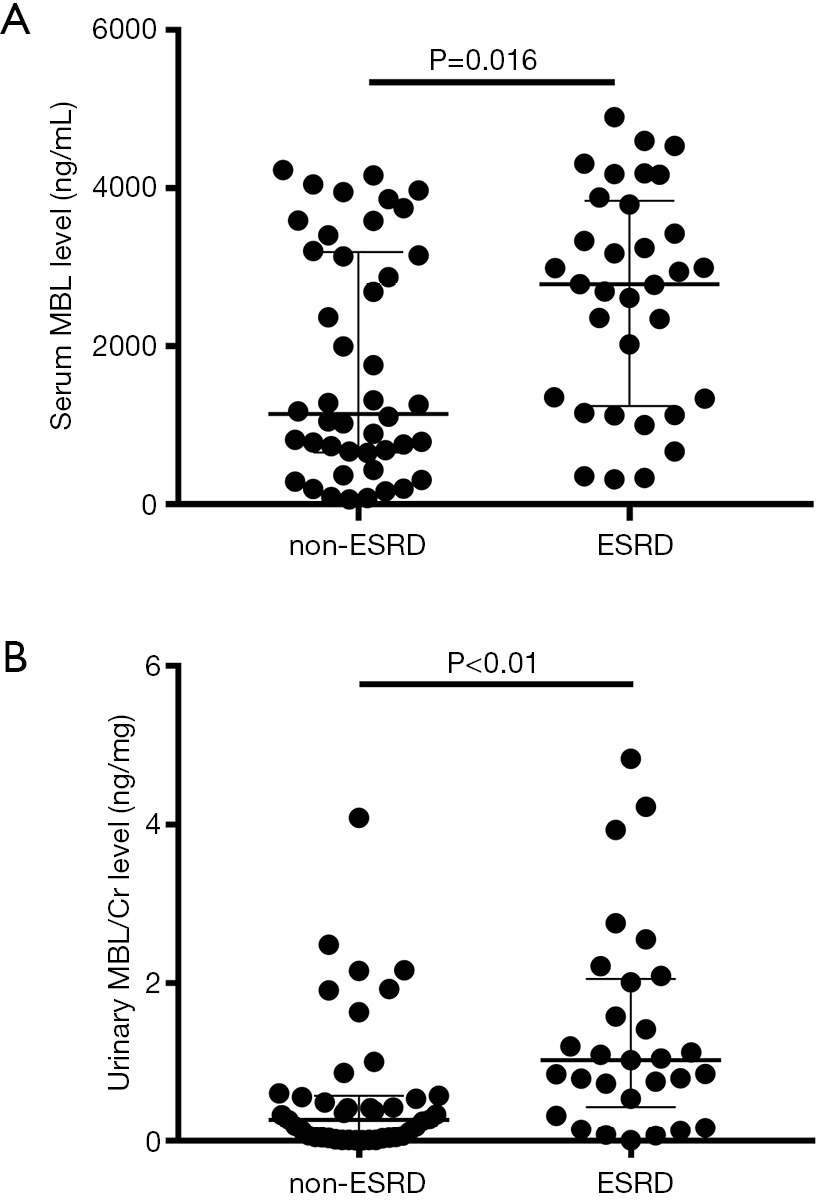 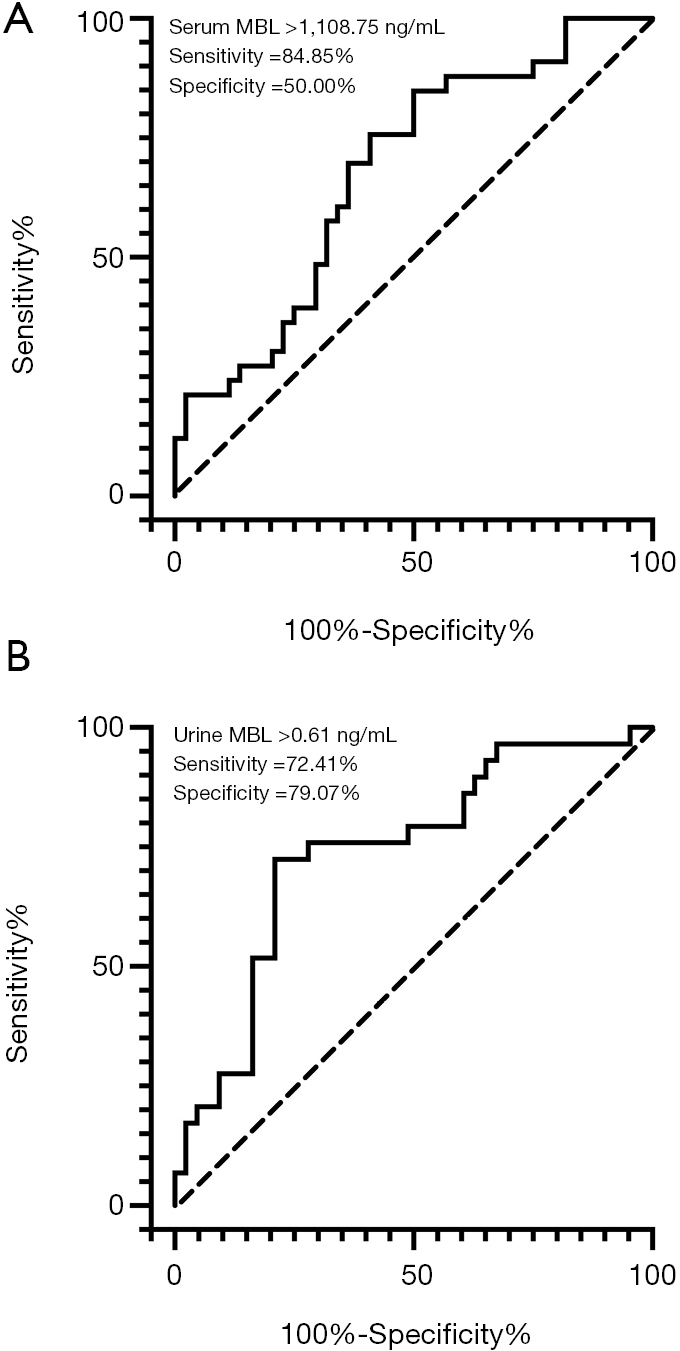 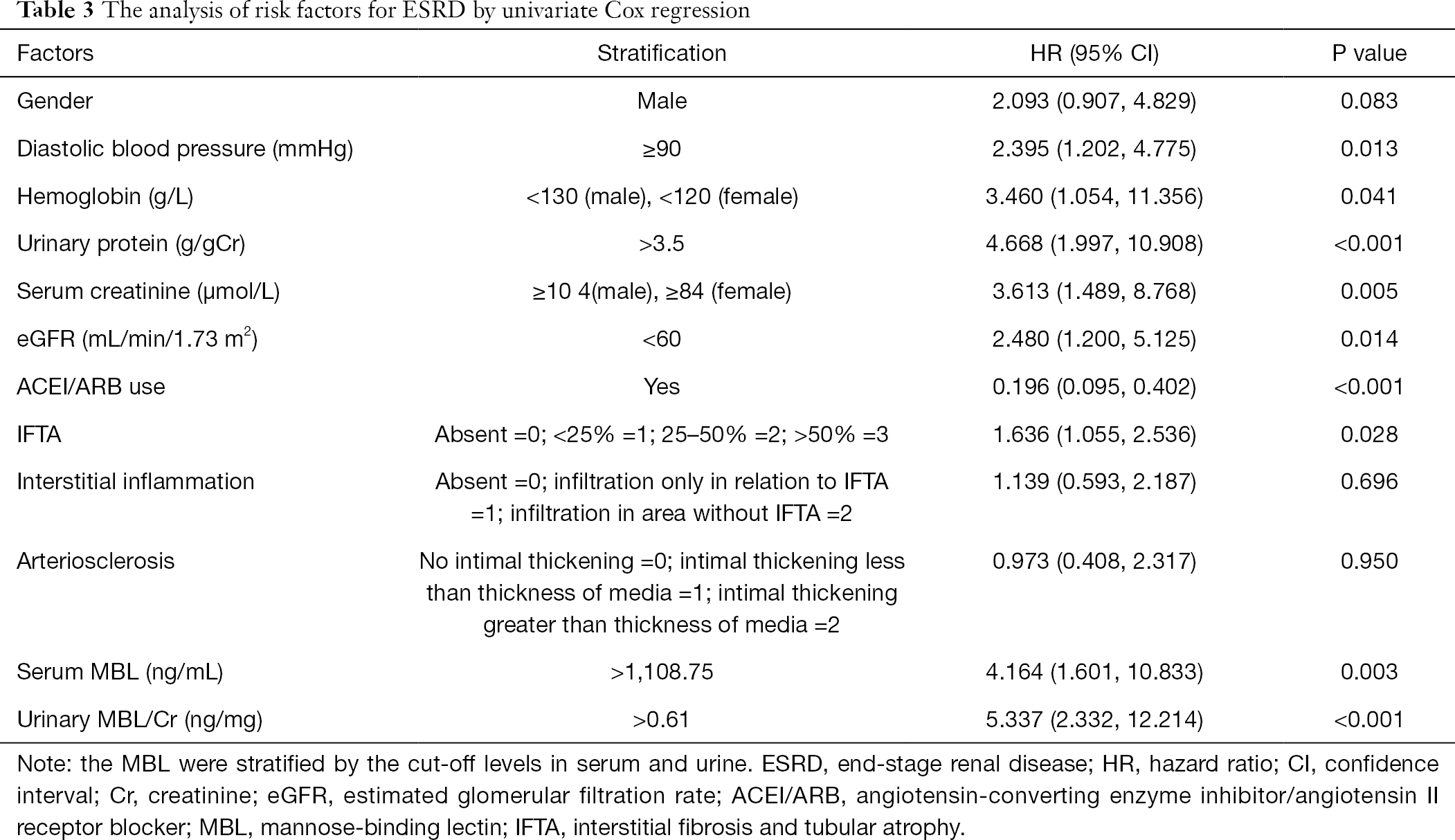 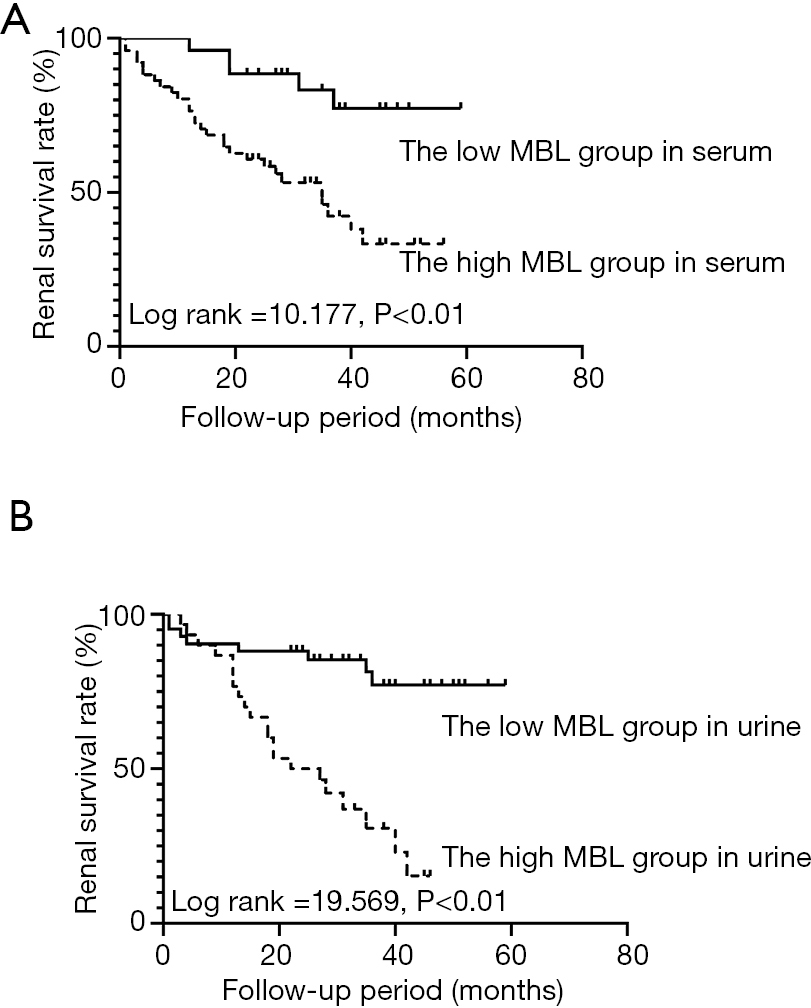 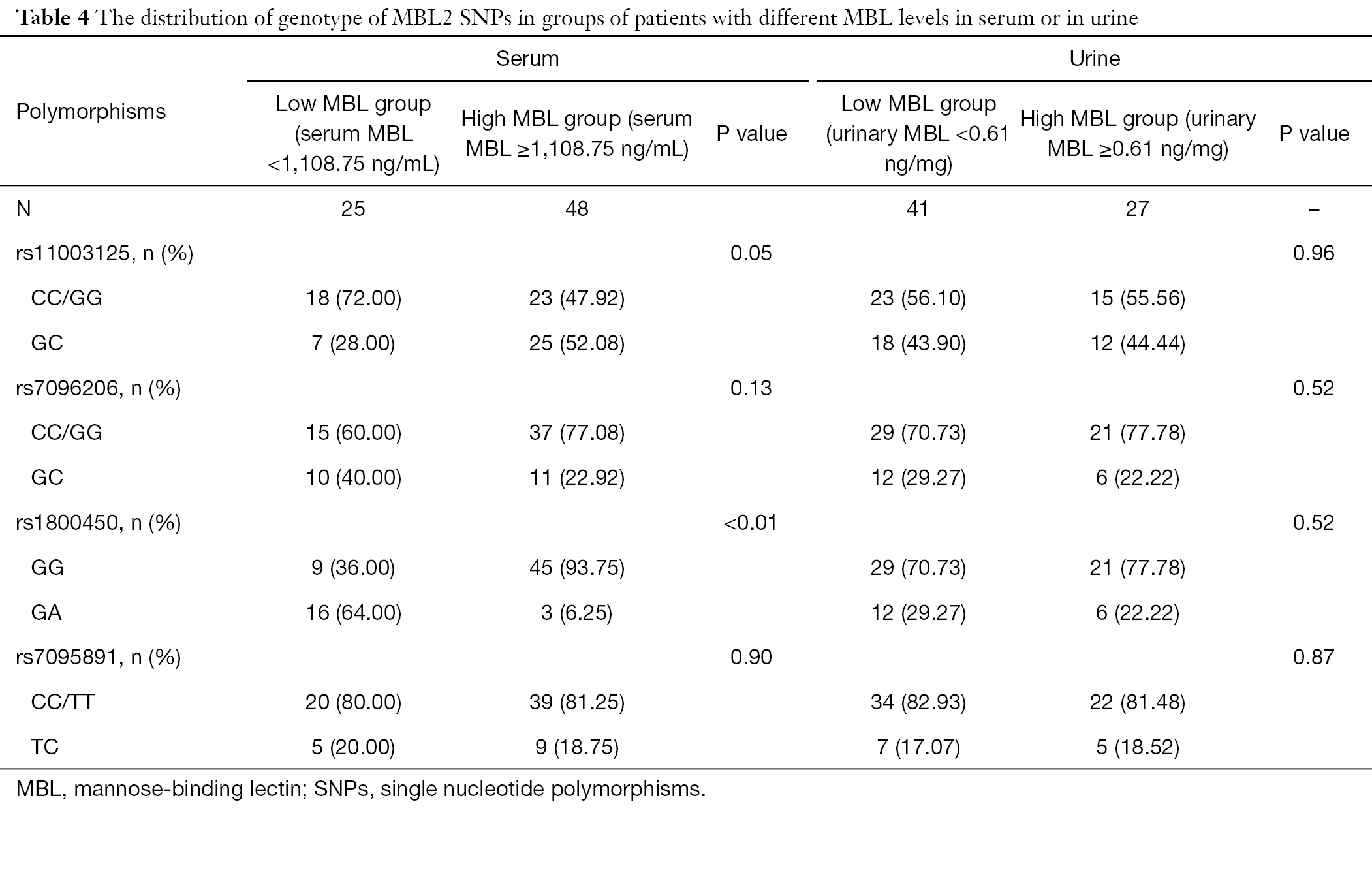 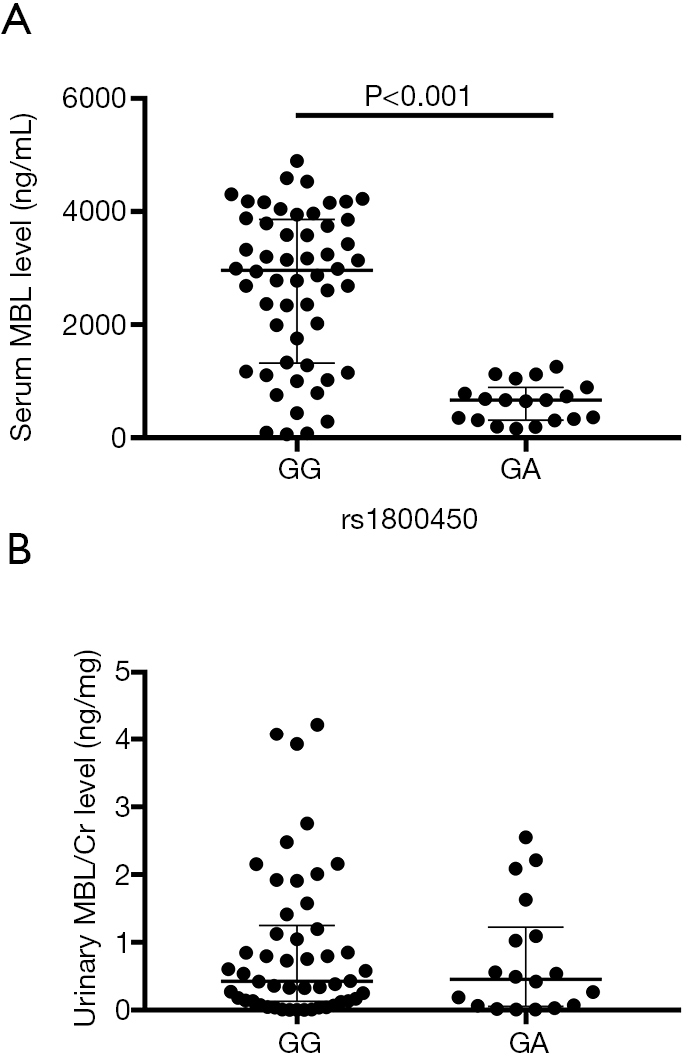 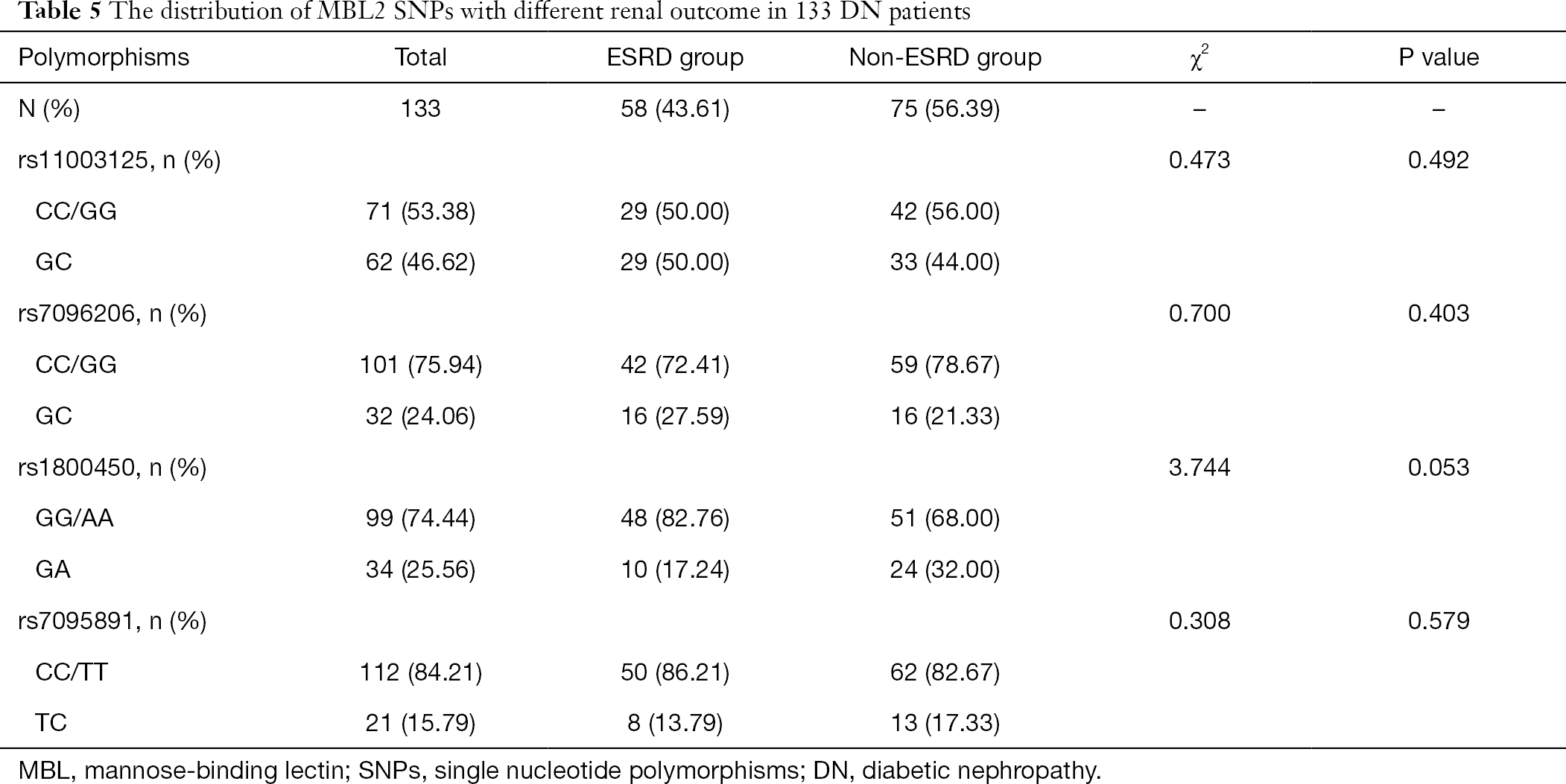 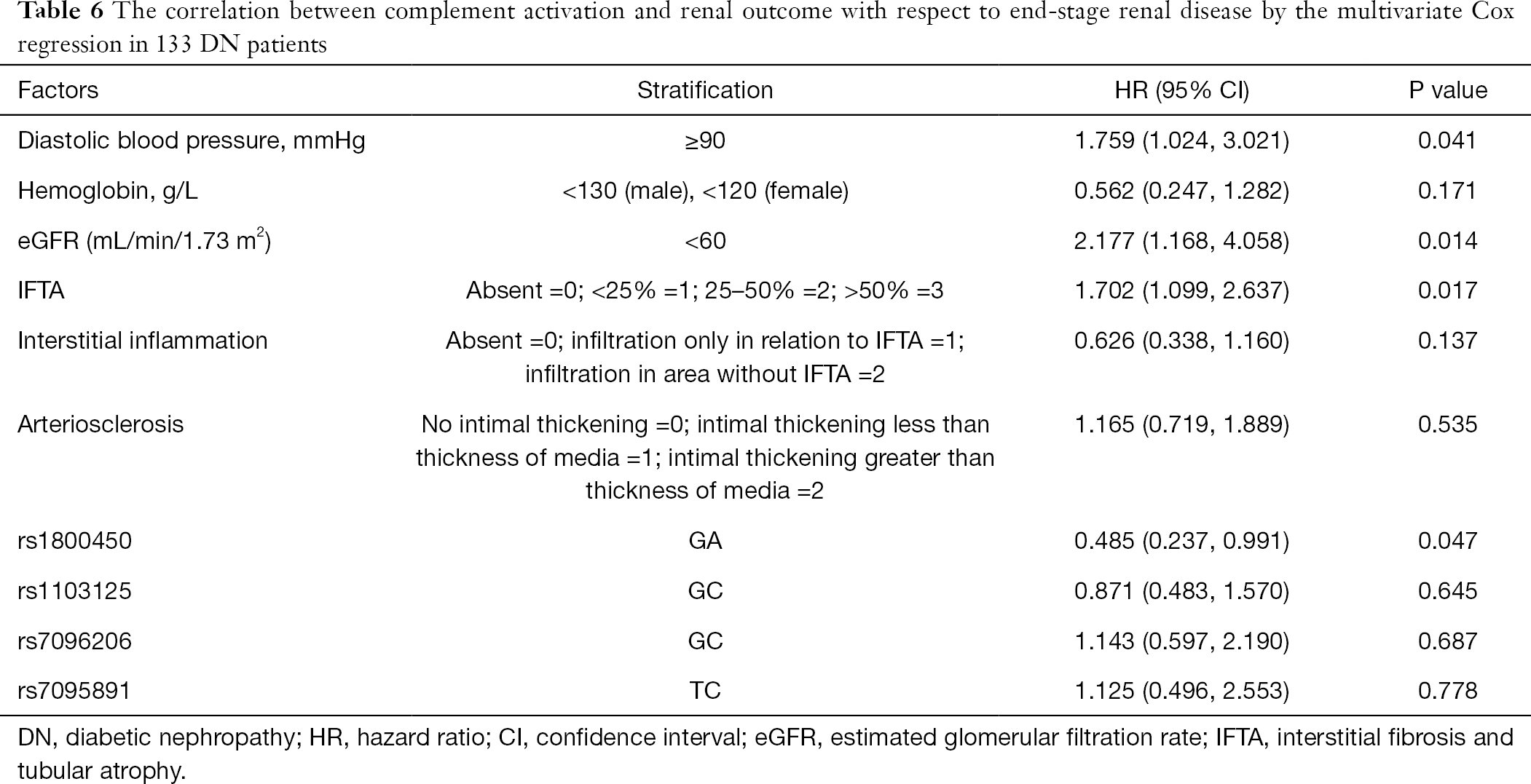 This study showed that the serum and urine MBL levels were higher in DN patients who were prone to develop ESRD, and serum MBL level was an independent risk factor for the progression to ESRD. In addition, the patients with GA genotype of rs1800450 of the MBL2 gene had lower serum MBL level and less possibility of developing ESRD.

Activation of MBL may initiate the regional and systemic inflammation through the cascade of complement and modulation of pro-inflammatory cytokine production (14). Studies showed increased plasma level of MBL was associated with the development of DN in patients with type 2 DM (8,9,15). Also, MBL and MBL-associated serine protease 1 (MASP1) deposited in the renal tubular interstitium, closely correlated with the severity of tubular interstitial injury (8,16). Hansen et al. (17) reported that in type 2 DM patients, measurement of MBL alone or in combination with C-reactive protein (CRP) can provide prognostic information on the development of albuminuria. Another study showed that elevated serum MBL in type 2 DM patients was correlated with the development of DN, especially in combination with serum CRP (18). MBL may also participate in the development of DN through oxidative stress and coagulation cascades (19,20). These studies suggested that MBL may be involved in the mechanism of DN progression. We found that the elevated serum MBL level was an independent risk factor for the progression to ESRD in DN patients, and the risk of ESRD was 4.644 assessed by HR when serum MBL was higher than 1,108.75 ng/mL.

This study investigated the correlation of the MBL2 SNPs with DN progression, and further proved this correlation in a new cohort of DN patients. Bijkerk et al. demonstrated that circulating MBL levels were associated with DN, possibly being dependent on polymorphisms of the MBL2 exon 1 and promoter (21). Similarly, patients with the GA genotype of MBL2 rs1800450 gene had low serum MBL level in our study, consistent with the previous study (13). rs1800450 was the main variant in the exon 1 region of the MBL2 gene and was shown to be associated with the development of type 2 diabetes (22). In Hansen’s study, genotypes with high MBL expression were more frequent in DN patients than those with normal urinary albumin excretion (UAE), and the risk of having nephropathy was 1.52 assessed by odds ratio (OR) given a high MBL genotype (23). Our results indicated that DN patients with heterozygous genotype (GA) of rs1800450 had better renal outcomes than those with homozygous genotype, decreasing the HR of ESRD development in DN patients by 51.5%. These results suggested that the GA genotype of rs1800450 may be valuable for predicting the incidence of ESRD in DN patients. In addition, no correlation was observed between the other gene SNPs and ESRD in the present study, which is consistent with the previous study by Zhang et al. (13)

In conclusion, activation of MBL was correlated with the progression of DN. The rs1800450 SNP of the MBL2 gene may be valued in predicting the incidence of ESRD in DN patients. Considering the limitations of this study as a single-center study with a small sample size, the role of MBL in DN pathogenesis needs to be further confirmed.

Reporting Checklist: The authors have completed the STROBE reporting checklist. Available at http://dx.doi.org/10.21037/atm-20-1073

Conflicts of Interest: All authors have completed the ICMJE uniform disclosure form (available at http://dx.doi.org/10.21037/atm-20-1073). The authors have no conflicts of interest to declare.

Ethical Statement: The authors are accountable for all aspects of the work in ensuring that questions related to the accuracy or integrity of any part of the work are appropriately investigated and resolved. This research protocols were conformed to the provisions of the Declaration of Helsinki (as revised in 2013) and were approved by the Ethic Committee of the First Affiliated Hospital of Medical School of Zhejiang University (No. 2017243). All patients were informed consent.