Giant retroperitoneal liposarcoma with a maximum diameter of 37 cm: a case report and review of literature

Liposarcoma is a rare malignant tumor originated from adipose tissue. It may occur wherever fat tissue is present. Retroperitoneal liposarcoma accounts for 12% to 40% of all liposarcoma (1), with an estimated incidence rate of 0.5 per 100,000 of the population (2). It commonly occurs in age groups of fifty and sixty without clear relation to sex or race (3-5).

Retroperitoneal liposarcoma can grow to enormous size due to the large potential space in retroperitoneum. This often leads the involvement of adjacent organs and large vessels before the tumor is detected (6). Nevertheless, those tumors weighing over 20 kg are defined as “giant liposarcoma” by some literatures (7). Given the low incidence and the complexity caused by the huge mass, few have sufficient experience in the treatment of such bulky tumors. Herein, we present a case of giant retroperitoneal liposarcoma that was 37.0 cm × 32.0 cm × 26.5 cm in size and weighing 21 kg. Furthermore, we also reviewed 13 cases of giant retroperitoneal liposarcoma, with a diameter over 30 cm, from literatures in English on PubMed database. To the best of our knowledge, this article is the first literature review focusing on the characteristics and treatment of liposarcoma with diameter over 30 cm and propose plans of management based on existing experience. We present the following case in accordance with the CARE reporting checklist (available at http://dx.doi.org/10.21037/atm-20-1714).

A 65-year-old man reported that his abdominal girth was increasing in the past 2 years, without significant abdominal distention, constipation, nausea, vomiting or inappetence. He had a history of right inguinal hernia over 50 years without any therapeutic intervention. Physical examination upon admission showed abdominal obesity, and a diffuse tough mass with unclear margins was palpated in the abdominal area. Computed tomographic scans of abdomen and pelvis revealed a huge mass of low density occupying the majority of abdominal cavity (Figure 1A), characterized by the coexistence of areas with mixed density. The mass had led to a remarkable dislocation of intra- and retro-peritoneal organs to the left side of the abdomen. The top of the mass pushed stomach and part of intestine up against the diagram (Figure 1B, black arrow), and the bottom reached the lowest level of the pelvis, herniating through the right inguinal canal into the right scrotum (Figure 1A,C, white arrow). 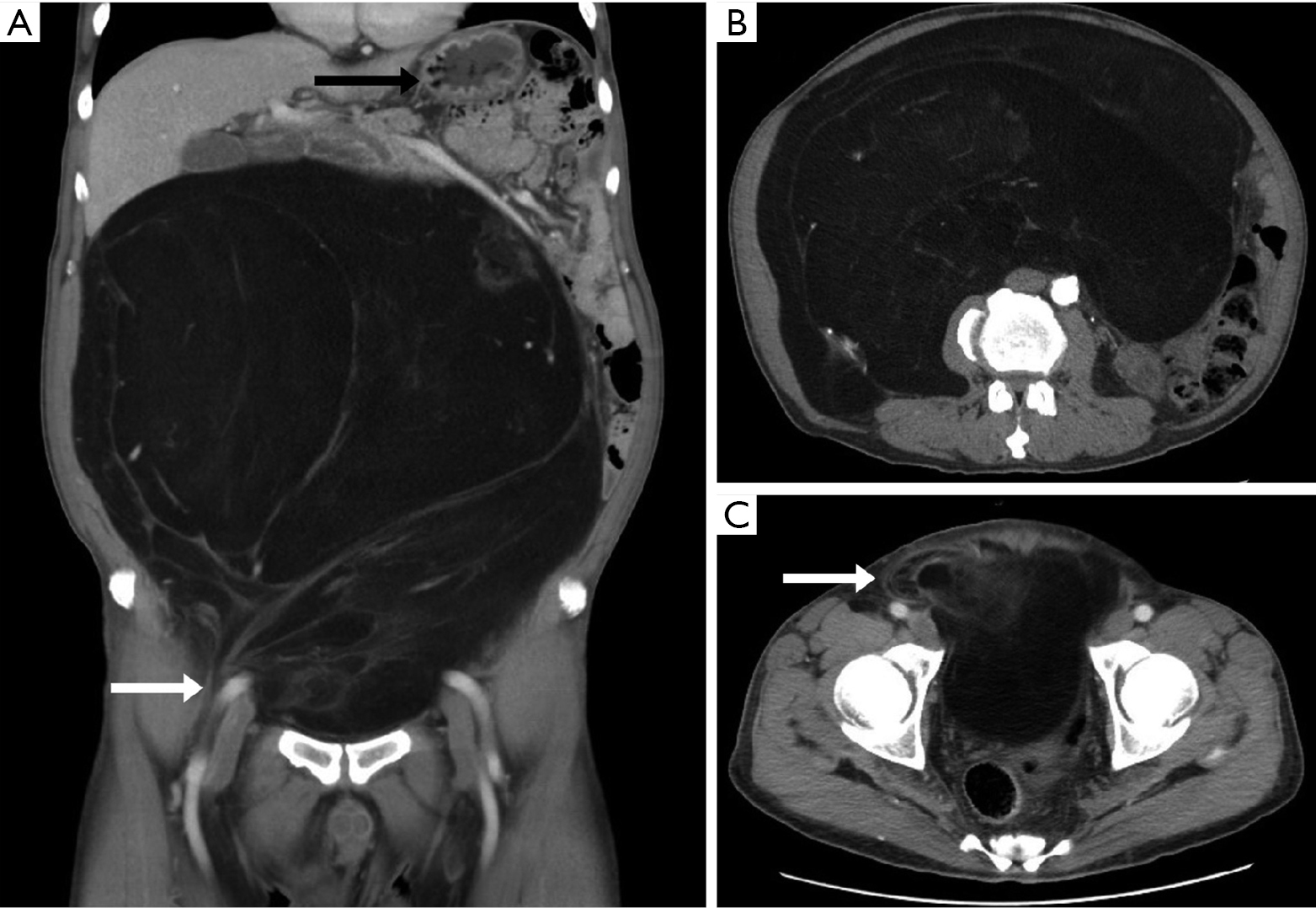 Figure 1 Coronal section (A) and cross section (B,C) of abdominal computed tomography. Black arrow: Stomach and part of intestine were pushed aside by the mass. White arrow: The mass herniated through the right inguinal canal.

Successful en-block surgical resection of the giant mass was performed (Figure 2). The mass was 37.0 cm × 32.0 cm × 26.5 cm in size and weighted 21.0 kg. Histopathological analysis indicated a well-differentiated liposarcoma (Figure 3). According to the grading system of soft tissue sarcoma established by the French National Federation of Cancer Centers (FNCLCC), the tumor was classified as grade 1. The patient was discharged from hospital on postoperative day 8 without any post-operative complications. No sign of recurrence was observed at twelve months follow-up. The patient was satisfied with the treatment and outcome. Figure 4 shows the timeline of clinical management. 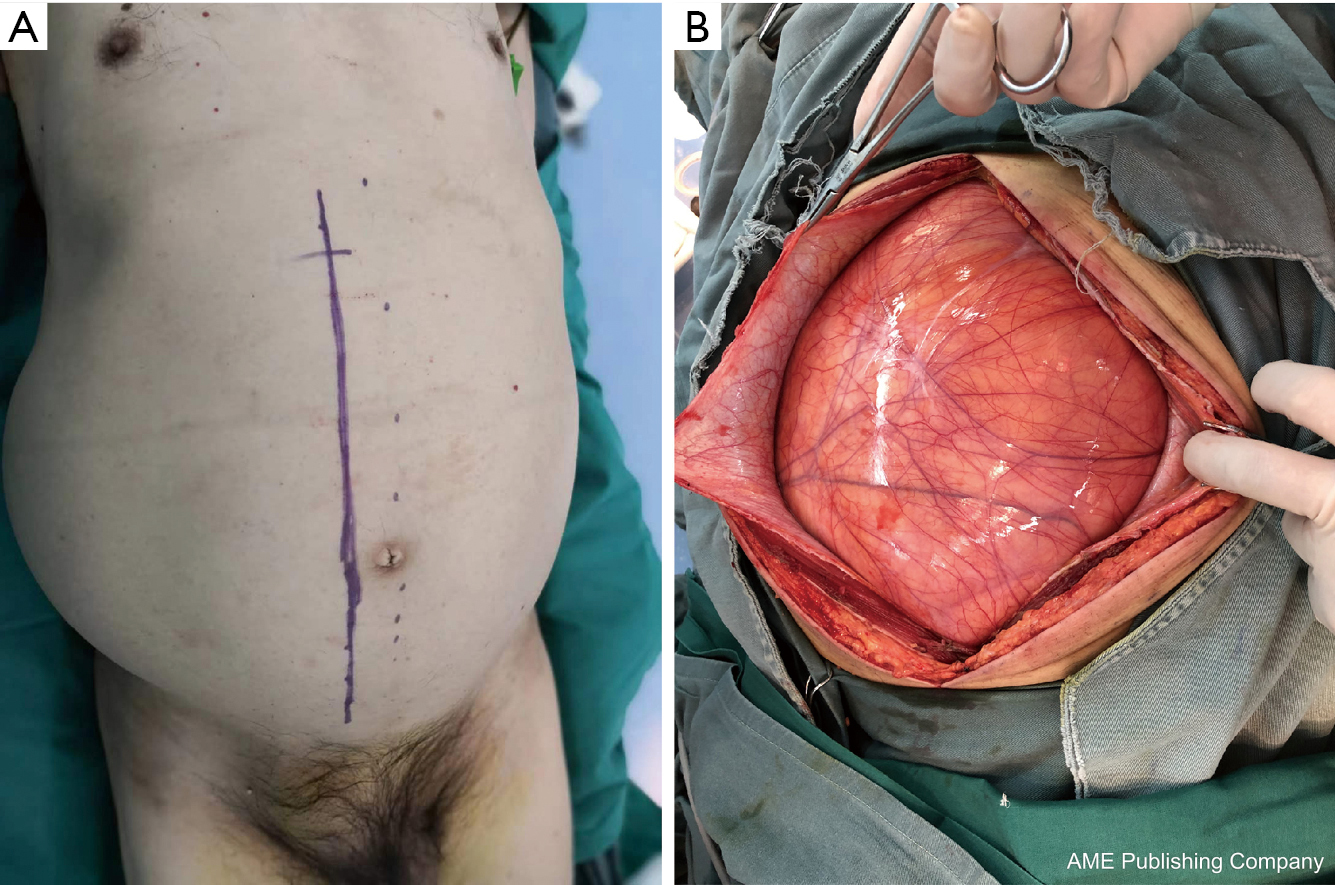 Figure 2 Picture of the patient and the tumor. (A) Appearance of the patient’s abdomen in supine position. (B) During surgery, a midline incision was performed, and a giant well-encapsulated tumor was found. 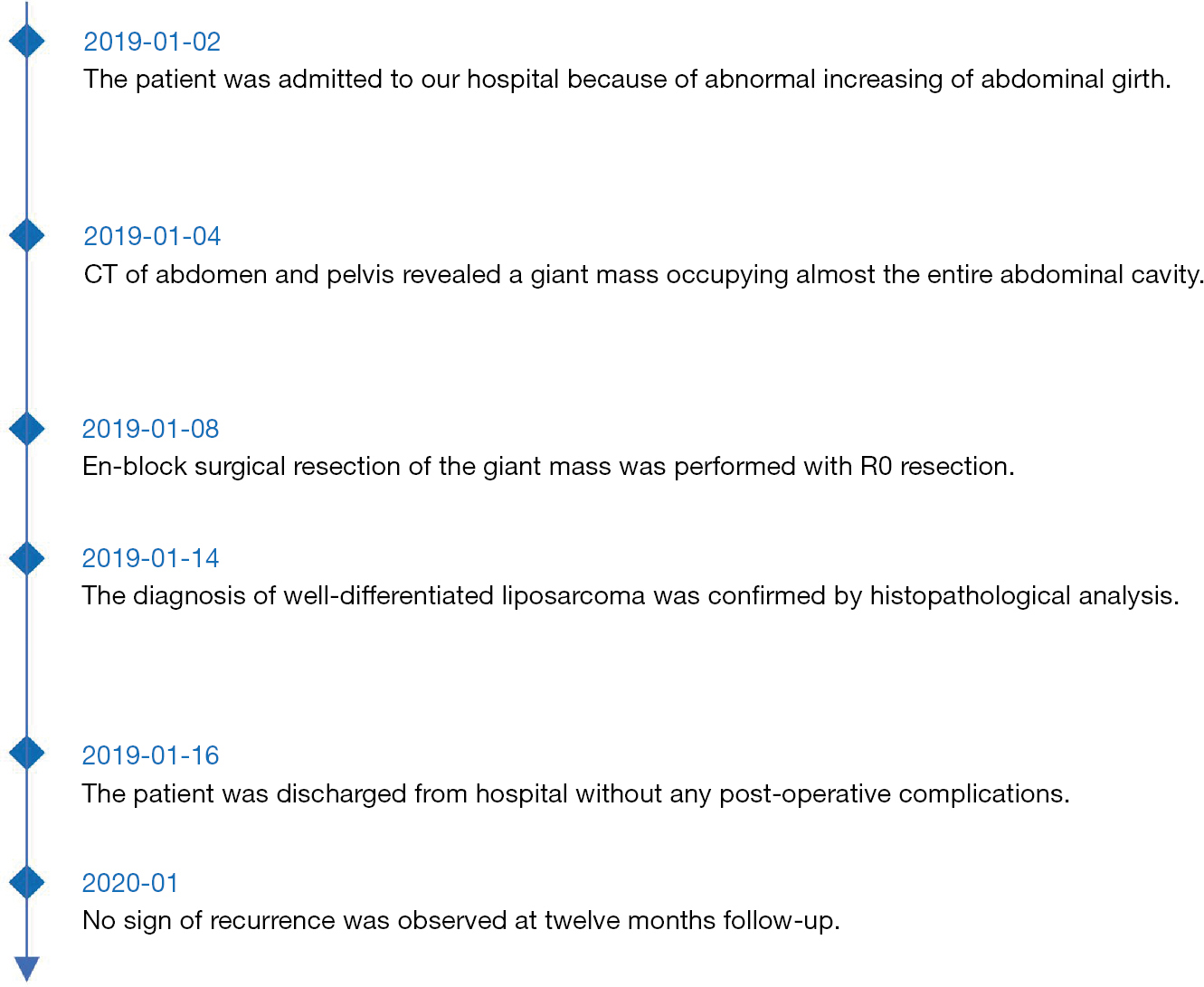 Figure 4 Timeline of clinical management and outcome of our case.

All procedures performed in studies involving human participants were in accordance with the ethical standards of our institutional ethics committee and with the Helsinki Declaration (as revised in 2013). Written informed consent was obtained from the patient.

Among all the English literatures on PubMed database from 1980 to December 2019, only 13 cases of giant retroperitoneal liposarcoma with a diameter greater than 30 centimeter have been reported. Of the 14 patients (including our case), 9 were male (64.3%) and 5 were female (35.7%). Median age was 57 years old [41–75]. All patients have noted abdominal distension or increasing in abdominal girth, with various complaints. Computed tomography was the main imaging examination used to make the diagnosis. Furthermore, 4 patients (28.6%) received fine needle aspiration cytology before surgical operations to make official diagnosis. All the patients underwent surgeries, among whom 8 out of 14 (57.1%) were combined excisions, including 7 nephrectomies (50%), 2 enterotomies (14.3%), 1 hystero-ovariectomy (7.1%) and 1 diaphragmatic resection (7.1%). Histopathological examinations of subtypes showed 6 well differentiated (42.9%), 5 poorly differentiated (35.7%), 2 myxoid (14.3%) and 1 mixed (7.1%). Twelve patients (85.7%) had uneventful postoperative courses, whereas 2 patients (14.3%) developed postoperative complications, including 1 ileus (7.1%) and 1 chyloabdomen (7.1%). Both recovered without further surgery. Only 1 patient received radiotherapy after surgery, but the follow-up data was not mentioned in the article. The follow-up period ranged from 3 to 63 months, during which 3 patients had tumor recurrence at 3, 16, 63 months. The histopathological subtypes of these three cases were myxoid, well differentiated, mixed, respectively (Table 1).

Retroperitoneal liposarcoma is a rare mesenchymal tumor representing 0.07% to 0.2% of all neoplasia (21). They occur at all ages, with a peak incidence in mid-fifties (22,23). The gender distribution is approximately equal (24). As potentially the largest tumors found in the human body (25), retroperitoneal liposarcoma can grow to extremely large size before inducing clinical symptoms because the potential space of the retroperitoneum is loose and expandable without any bony boundaries. The largest series of prospective study in retroperitoneal liposarcoma by Lewis et al., reported that at the time of diagnosis, 94% of these tumors exceeded 5 cm in diameter, and 60% reached 10 cm (26). However, retroperitoneal liposarcoma with a diameter greater than 30 cm is still exceptionally rare. The majorities of these tumors are accidentally found due to abdominal distention, dyspepsia, dyspnea, or even on a regular abdominal examination. As a result of low incidence and special anatomical location, few surgeons are experienced in the management of such giant tumors. The number of randomized trials is also limited.

Preoperative diagnosis is of great importance in the optimal treatment of retroperitoneal liposarcoma. Computed tomography (CT) is the most common used imaging tool for the diagnosis and preoperative evaluation of retroperitoneal liposarcoma. CT of the chest is required before surgery to rule out any metastasis to the lung. Furthermore, CT also plays an important role in preoperative staging. Low grade liposarcomas tend to present with mostly fat and very little soft tissue signals on CT, whereas high grade liposarcoma appear with dense and heterogenous signals after enhancement with contrast injection. Magnetic resonance imaging and ultrasound are useful options when more precise anatomical information is needed in liver or muscular regions (27). Up to now, there is no clear evidence in literatures supporting the need for histological biopsy of a suspected retroperitoneal liposarcoma before treatment, as most tumors located in the retroperitoneum are much more likely to be liposarcoma requiring surgical interventions (28). Aspiration cytology is recommended for patients with distant metastases or unresectable neoplasms in order to inform plans for preoperative radiotherapy or chemotherapy.

Surgery remains the mainstay of treatment for non-metastatic retroperitoneal liposarcoma. The definitive operative procedure requires complete surgical resection of the tumor with negative margins and removal of adjacent structures such as kidney, intestine if local invasion is confirmed. The largest single-center prospective study conducted by Lewis et al. suggested that the median survival for patients who underwent complete resection with grossly negative margins was 103 months, comparing to 18 months in those with incomplete resection (26). Besides, it has been demonstrated that patients who undergo complete or even compartmental resection (R0 or R1) of retroperitoneal liposarcoma have a five-year overall survival of 54% to 70%, significantly higher than 16.7% in those without complete resection (22,25,33). Since the space of the retroperitoneum is large and expandable, tumors are often very large when found with local invasion to adjacent fat tissues or organs, rendering resections with negative margins very challenging. It is necessary to carefully evaluate the extent of resection and subsequent impact in quality of life before initiating an extensive surgery.

While the best choice of treatment is complete surgical resection, some tumors are unresectable at diagnosis due to distant metastasis or invasion of vital structures. Adjuvant therapy followed by diagnostic biopsy could be an option to downstage the tumors before surgical intervention. Patients with positive surgical margins or high grade liposarcoma also need the consolidation from adjuvant therapy. Studies have shown that radiotherapy reduces the risk of local recurrence and improves the recurrence-free interval (31,34). However, data supporting positive impact of radiotherapy on overall survival is limited (35,36). At present, the role of chemotherapy in the management of retroperitoneal liposarcoma remains controversial as no studies has demonstrated a clear improvement in survival outcome (37).

Similar to other types of soft tissue sarcoma, the prognosis of retroperitoneal liposarcoma depends on age, anatomical location, size, histological subtype, and distant metastasis of the tumor. According to the present literatures, large tumor size alone is not a contraindication to surgical resection. Although surgical operation frequently involves wide excision along with adjacent organs, such as kidney and colon, complete resection with negative margins can be achieved in most cases with minor post-operative complications and satisfactory recurrence-free interval.

In conclusion, retroperitoneal liposarcoma is an uncommon aggressive neoplasm with atypical clinical manifestations. CT can be reliably used as a diagnostic tool. Complete resection is the gold standard for treatment of this disease. Tumors with a diameter greater than 30 cm alone should not be considered as a contraindication to surgical resection. Wide excision along with adjacent organs in order to obtain negative surgical margins is justified in the case of local invasion. The role of adjuvant radio or chemo therapy remains controversial to date. Our study corroborates the conclusions above. The resection of the giant tumor was successful with no post-operative complications. However, since our follow-up period is only twelve months, the long-term outcome still needs further evaluation.

Reporting Checklist: The authors have completed the CARE reporting checklist. Available at http://dx.doi.org/10.21037/atm-20-1714

Conflicts of Interest: All authors have completed the ICMJE uniform disclosure form (available at http://dx.doi.org/10.21037/atm-20-1714). The authors have no conflicts of interest to declare.

Ethical Statement: The authors are accountable for all aspects of the work in ensuring that questions related to the accuracy or integrity of any part of the work are appropriately investigated and resolved. All procedures performed in studies involving human participants were in accordance with the ethical standards of our institutional ethics committee and with the Helsinki Declaration (as revised in 2013). Written informed consent was obtained from the patient.