Patients with impaired lung function or chronic obstructive pulmonary disease (COPD) has widely been considered as high-risk for pulmonary or mediastinal surgery. There is a high incidence of postoperative respiratory failure for these patients, which may hamper them from fast recovery after tumor resection. In recent expert consensuses, impaired lung function is also one of contraindications for SV-VATS or tubeless thoracic surgery (9,10).

Although it is not a routine practice, several studies have made an attempt and demonstrated SV-VATS was a feasible technique for lung function deficiency patients underwent pulmonary surgery (11). However, whether would SV-VATS successfully adapt to mediastinal lesion resection in patients with pulmonary insufficiency still remains controversial. The aim of this study was to evaluate the short-term results of SV-VATS for mediastinal lesion in patients with impaired pulmonary function. We present the following article in accordance with the STROBE reporting checklist, available at http://dx.doi.org/10.21037/atm-20-1652 (12).

The study was conducted in accordance with the Declaration of Helsinki (as revised in 2013). The study was approved by the institutional ethics committee of the first affiliated hospital of Guangzhou Medical University (2019-SVA) and informed consent was taken from all the patients.

The data of patients with impaired lung function that underwent mediastinal tumor resection between December 2015 and February 2020 were retrospectively and consecutively identified through electronic medical records. The experimental group is SV-VATS patients and the control group is MV-VATS group. Pulmonary ventilation function test was accomplished to identify patients with impaired lung function. Computed tomography (CT) scan of all patients was performed to confirm the size and position of lesions by two independent radiologists before surgery. Patients were included if they met the following criteria: (I) preoperative forced expiratory volume in one second (FEV1) below 70% of predicted; (II) mediastinal lesion less than 10 cm and no obvious invasion to other organs; (III) American society of anesthesiologists (ASA) status class <3.

Vital signs were routinely monitored for patients after entering the operating room. Midazolam 0.06 mg/kg and atropine 0.01 mg/kg were administered 30 minutes before anesthesia induction.

The detailed anesthesia protocol for mediastinal resection has been reported by our team previously (13). Briefly, in MV-VATS group, a double lumen tracheal tube was inserted after anesthesia induction. Muscle relaxant (cis-atracurium), analgesic agents (sufentanil and remifentanil) and sedative (propofol and dexmedetomidine or inhaled sevoflurane) were given to maintain anesthesia for patients during operation. In SV-VATS group, double-laryngeal mask was used in placed of tracheal tube after anesthesia induction. No muscle relaxant was used during entire operation process. Low dose of analgesic agents (sufentanil and remifentanil) and intravenous sedative (propofol and dexmedetomidine) were given for maintenance. Synchronized intermittent mandatory ventilation (SIMV) mode was used if patients lose spontaneous ventilation in temporary. Regional anesthesia including incision blockade, intercostal nerve blockade and vagus nerve blockade were performed for patients in SV-VATS group.

Operation was completed through lateral approach. The detail surgery process was described elsewhere by our team (13). A 1.5 cm skin incisions was made in the third intercostal space along the middle axillary line, the fifth intercostal space along the anterior axillary line, and the seventh intercostal space along the posterior axillary line. The left and right phrenic nerves were then identified and separated from the pericardium, including the anterior mediastinal pleura, thymus, and surrounding fatty tissue. The region of the mediastinal tumor was separated at the right side from the right brachiocephalic vein, on the left side from the innominate vein, and on the dorsal side from the brachiocephalic artery and trachea. After that, the mediastinal tumor was removed.

To reduce the risk of mucosa injury, we usually dissect the mediastinal tumor with carefully grasping and traction. All specimens were safely removed via a specimen bag by enlarging the upper port. Any bleeding or air leak was managed by reinforcement sutures using 4/0 PROLENE (Ethicon, Somerville, NJ, USA) or application of sealants such as Biopaper (Datsing Bio-Tech Co Ltd., Beijing, China). After the operation, a chest tube was placed through the observation hole.

Patients were sent back to ward after waking up in recovery room. Chest X-ray scan was performed at the same day after operation and another time before discharge. Drinking and meal intake were resumed after bowel sound returned to 5 per minute with no nausea or vomiting. Two groups of patients were discharged by the following standard: body T°<38.0 °C, SaO2 on room air >95%, no complications requiring in-hospital treatment, no respiratory infections, lung re-expansion >70% after chest tube removal, ultrasound pleural effusion <8 cm.

Descriptive statistics were reported as median (range) or mean ± standard deviation for continuous data, and as number (%) for categorical data. Student t-tests for independent data. Categorical variables are given as a count and percentage of patients and compared with the χ2 or Fisher exact test. All tests were 2-sided, with an a-level of 0.05. SPSS software (SPSS version 25.0; IBM Corp, Armonk, NY, USA) were used for all statistical evaluations.

From December 2015 to February 2020, 391 mediastinal tumor patients were consecutively enrolled in this analysis (Figure 1), of which 32 (8.18%) patients were diagnosed as lung function deficiency. The mean age was 65.47±10.46, which was much older than entire cohort of mediastinal tumor patients in our previous report (13). The most common causes of lung function deficiency were smoking history (81.25%) and COPD (71.88%). Among these patients, 15 (46.88%) underwent SV-VATS and 17 (53.12%) were performed with MV-VATS. Two (11.76%) patients in MV-VATS group had lung surgery (lobectomy) history. The characters of enrolled patients were shown in Table 1. All baseline characters were balanced between groups. 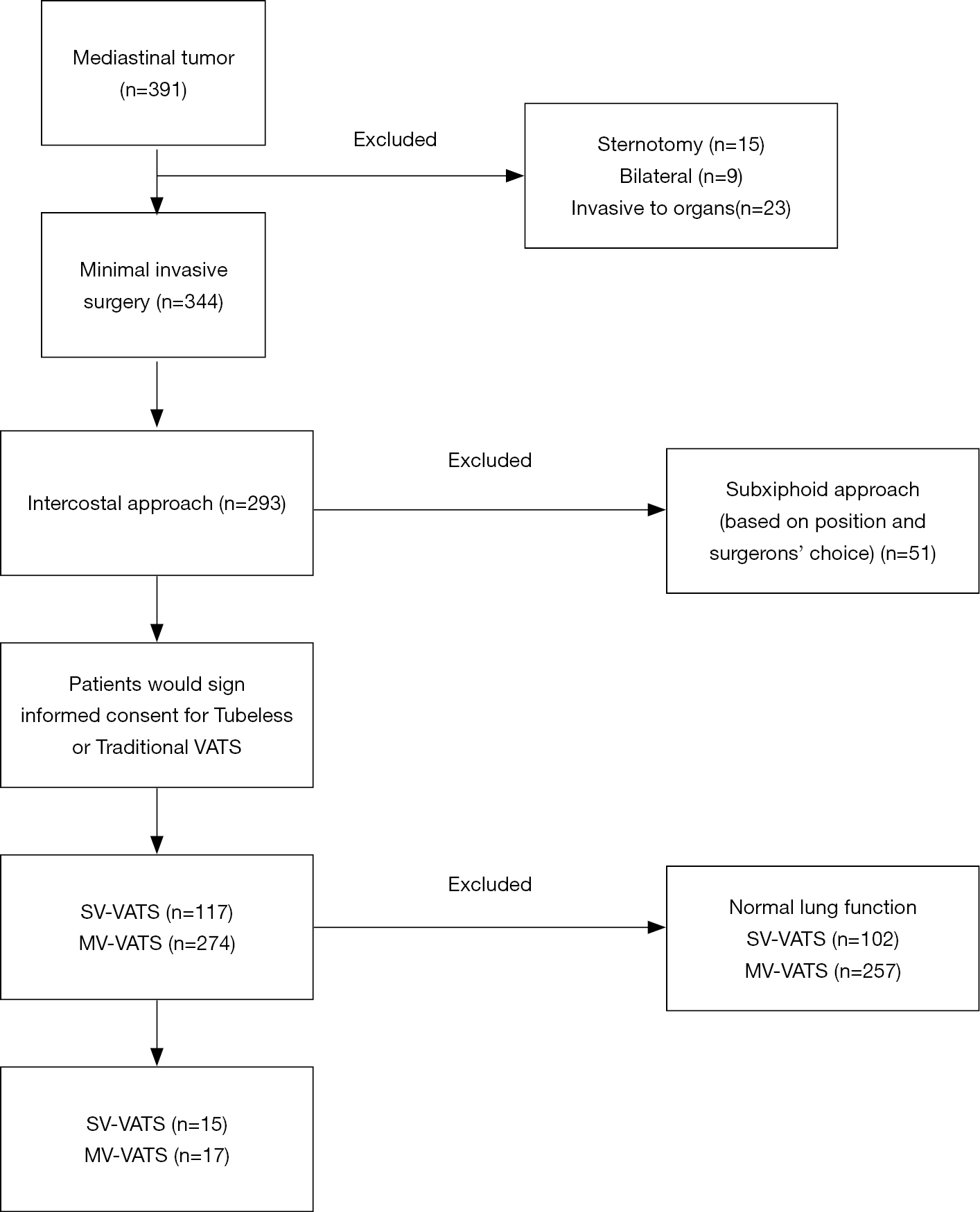 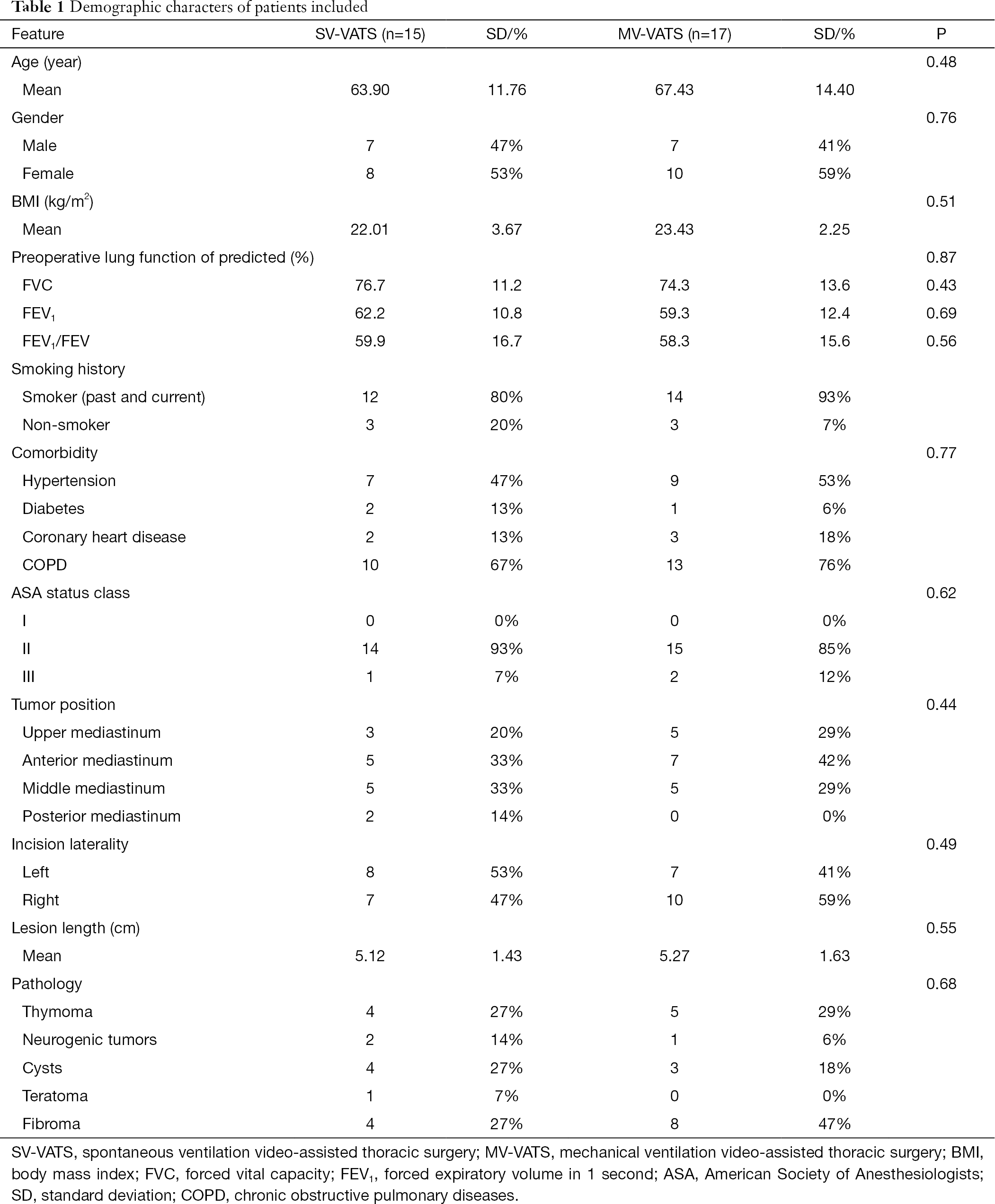 No surgery or anesthesia related death or convert to open case occurred either in SV-VATS group or the MV-VATS group. Cases both in MV-VATS and SV-VATS achieved R0 resection. There was no case in SV-VATS need to be converted to MV-VATS. Nine (60.00%) and 11 (64.71%) patients were found to have pleural adhesions during operation in SV-VATS group and MV-VATS group, respectively. Patients in the SV-VATS group had similar intraoperative blood loss (20.63 vs. 18.76 mL, P=0.417) with MV-VATS group. The anesthesia time (217.51 vs. 197.76 min; P=0.343) and surgery time (141.23 vs. 132.36 min; P=0.209) were also similar between groups. One patient underwent MV-VATS was transferred to intensive care unit (ICU) because of extubation failure owing to hypoxia. Extubation was successfully performed after 2 days observed in ICU for that patient and non-invasive positive pressure ventilation (NIPPV) was then used for 1 day before he left ICU.

Five people suffered postoperative complications in each group. The detailed complications were summarized in Table 2. Although no statistical significance was observed, sore throat appeared more in MV-VATS group (11.8% vs. 0%).

VATS has been shown to be a safe way to treat mediastinal tumors, which is widely accepted due to the advantages of smaller incision, shorter hospital stays, less postoperative pain and bleeding and less damage to the lung function. Non-intubated anesthesia with spontaneous ventilation has been applied in VATS to further prevent the adverse events caused by traditional intubated and mechanical induced lung injury. In this study, we reported our initial experience of SV-VATS for mediastinal tumor in patients with impaired lung function. The intraoperative and postoperative recovery outcomes showed that SV-VATS is a feasible and safety procedure for mediastinal tumor patients with lung function deficiency.

Previous researches and case reports have investigated the spontaneous for lung cancer in patients with impaired pulmonary function, either through thoracotomy or VATS (14-16). Twenty-eight lung cancer patients underwent SV-VATS with impaired lung function were included in study from Wang et al. (11), they reported 1 patient required conversion to intubated, 5 patients had air leaks more than 5 days, 6 patents had subcutaneous emphysema, 2 patients developed acute exacerbations COPD, and 1 patient had atrial fibrillation after surgery. However, no comparison group was set in this study. Lan et al. (17) reported the management of SV-VATS in secondary contralateral thoracic surgery; these patients also damaged in lung function because of first lung operation. The study indicated the patients who undergo a secondary contralateral thoracic surgery had intraoperative stable vital signs and did not increase postoperative complications. Different from pulmonary surgery, lung would not be resected during mediastinal tumor operation. In our study, no significant clinical difference was observed between SV-VATS and MV-VATS, which indicated SV-VATS is technically feasible and safe for mediastinal tumor resection. It can be used for situation when MV-VATS is contraindicated, such as muscle relaxant intolerance because of large mediastinal mass (18).

Several limitations of non-intubated VATS should also be acknowledged. (I) prolonged spontaneous breathing may lead to hypoxia (defined as SpO2 <90%), and hypercapnia (defined as PaCO2 ≥60 mmHg); (II) conversion to general anesthesia with intubation may happen due to uncontrollable ventilation situation. Previous studies have reported that the conversion rate was about 0–10% (26); (III) aspiration may occur without protection of the endotracheal tube. Inadequate fasting, gastroesophageal reflux disease or hiatal hernia would cause this complication. Thus, the anesthetist should be skillful to control over all these complex conditions. In spite of these situation, non-intubated VATS for mediastinal tumor is of good application prospect.

Concerns should also be considered with the use of non-intubated VATS for specific patients with impaired pulmonary function. Our study shows that non-intubated VATS is technically feasible in selected patients with impaired pulmonary function undergoing mediastinal tumor surgery. It may be an alternative anesthetic and surgical approach when managing mediastinal tumor patients who are considered high-risk for intubated general anesthesia. For patients with COPD, airway hyperactivity may present with acute exacerbations and result in severe complications perioperatively (27). In addition, general anesthesia causing respiratory depression, reduced hypoxia reflex, respiratory muscle relaxation and bronchial contraction may be intolerable for patients with impaired lung function. Furthermore, damage to chest wall and large vessels might exacerbate the impaired lung function. Thus, the probability of postoperative respiratory failure is increased. Non-intubated anesthesia with spontaneous ventilation could lower the risk of it and avoid further airway irritation due to less dose of analgesic (15). Although hypoxemia may develop during SV-VATS, it is mostly transient and can be easily improved with supplemental oxygen via high-flow humidified oxygen. Another challenge is that surgery for patients with impaired pulmonary function is associated with higher incidences of postoperative pulmonary complications, including pneumonia, atelectasis, acute heart failure, arrhythmia, pulmonary embolism, etc. Though SV-VATS was reported to decrease the risk of postoperative pulmonary complications, it is necessary to have careful postoperative management, discharge criteria and the follow-up plan. We suggest that appropriate patient selection, accumulated experience by performing minor SV-VATS procedures, and conversion to intubated general anesthesia without hesitation are essential to reduce the risk of emergency intubation and complications.

We acknowledge several limitations in this study. Firstly, the small sample size limited its statistical power. Secondly, single-institution retrospective design might incur bias in record and patient selection. Thirdly, insufficient follow-up time limited this study to report long-term change of lung function after surgery. Last, vial sign and blood gas test of patients were not recorded during operation. Randomized prospective studies for SV-VATS in patients with impaired lung function are warranted to validate the evidence.

SV-VATS is safe and provides similar short-term results to MV-VATS for mediastinal tumor resection in patients with limited pulmonary function.

Reporting Checklist: The authors have completed the STROBE reporting checklist. Available at http://dx.doi.org/10.21037/atm-20-1652

Conflicts of Interest: All authors have completed the ICMJE uniform disclosure form (available at http://dx.doi.org/10.21037/atm-20-1652). JH serves as an unpaid editorial board member of Annals of Translational Medicine from Jun 2019 to May 2024. The other authors have no conflicts of interest to declare.

Ethical Statement: The authors are accountable for all aspects of the work in ensuring that questions related to the accuracy or integrity of any part of the work are appropriately investigated and resolved. The study was conducted in accordance with the Declaration of Helsinki (as revised in 2013). The study was approved by the institutional ethics committee of the first affiliated hospital of Guangzhou Medical University (2019-SVA) and informed consent was taken from all the patients.