Thyroid cancer (TC) is the most common malignancy of the endocrine system and has a rapidly increasing global incidence (1-4). Despite this, the American Cancer Society reported that the 5-year relative survival rate in TC between 2008 and 2014 was 98% (5). A large number of living survivors, especially those with papillary thyroid cancer (PTC), the most common TC, inevitably face issues of overdiagnosis and overtreatment (6-8). Additionally, treatment-related adverse outcomes, including cardiovascular disease (CVD) due to levothyroxine replacement therapy (9,10) or second primary cancer due to radioactive iodine (RAI) therapy (11,12), have been reported as patients with TC have good survival with low disease-specific mortality.

The conventional treatment of differentiated thyroid cancer (DTC) is composed of initial thyroidectomy, followed by thyroid-stimulating hormone (TSH) suppression therapy and adjuvant radioactive iodine (RAI) therapy. RAI therapy using iodine-131 (131I) is a well-established treatment that can be administered to reduce disease recurrence after thyroidectomy in patients with DTC and aggressive histopathologic features or distant metastasis (13,14). Although RAI therapy is generally safe and effective, there are several adverse effects to be mentioned, for example, sialadenitis, gastrointestinal discomfort, second primary malignancy and infertility. Particularly, in previous studies, patients receiving RAI therapy for hyperthyroidism or toxic adenoma showed an increased risk of cerebrovascular diseases (15-17). In la Cour et al.’s study (18), the calculated radiation dose to the carotid artery after RAI therapy for benign thyroid disease was high enough to facilitate endothelial dysfunction and lead to atherosclerosis. However, several years later, la Cour et al. reported that RAI therapy had no or minimal effects on the atherosclerotic burden of the carotid arteries (19). These inconsistent results can be explained by the differences in the sample size, RAI dosage, underlying thyroid disease, and duration of follow-up; they further highlight the importance of concluding the debate concerning RAI treatment and CVD risk. Moreover, previous studies have primarily focused on stroke and cerebrovascular diseases in benign thyroid disease patients, who receive a relatively low cumulative RAI dosage. Another study, albeit with a small number of patients and short-term follow-up, investigated the adverse effects of severe hypothyroid state, induced by the withdrawal of thyroid hormone replacement therapy before RAI therapy, on the metabolic parameters, suggesting an increased risk of CVD in patients with RAI therapy (20).

In view of this, it is a salient point of our study to compare the cardiovascular events between patients with TC who received RAI treatment and those who did not using real-world data based on the Korean National Health Insurance-Health Screening Cohort (NHIS-HEALS, 2002-2015). We present the following article in accordance with the STROBE reporting checklist (available at http://dx.doi.org/10.21037/atm-20-5222).

The Korean NHIS is the sole mandatory public medical insurance system managed by the South Korean government and covers all citizens of South Korea. The NHIS recently released the second version of the NHIS-HEALS database (2002–2015), which included information from 512,568 randomly selected South Koreans aged 40–79 years who were eligible for the National Health Screening Program. The longitudinal information of the participants’ demographic, medical, and pharmaceutical records based on the International Classification of Disease, 10th revision (ICD-10) were accessed, and data on the medical procedures, hospitalization, biochemical laboratory results (such as fasting glucose and lipid profiles), blood pressure, and drug prescriptions were recorded. The detailed cohort protocol has been published previously (21-23).

This study originally included 7,894 patients newly diagnosed with TC of all types (ICD-10 C73) between January 1, 2004 to December 31, 2015. We excluded patients who met the following criteria: (I) patients who did not undergo thyroidectomy after TC diagnosis or had already undergone thyroidectomy 6 months before the diagnosis, (II) those with prior diagnosis of other malignancies (C00–C97, except C73), (III) those with a history of levothyroxine or RAI treatment, or (IV) those with incomplete information regarding levothyroxine or RAI treatments. A total of 4,845 patients with TC who underwent thyroidectomy after diagnosis and had no history of other malignancies and levothyroxine prescription or RAI treatment were finally evaluated. Figure 1 illustrates the schematic design of this study. All the 4,845 cases were analyzed without additional data handing since there was no missing data. 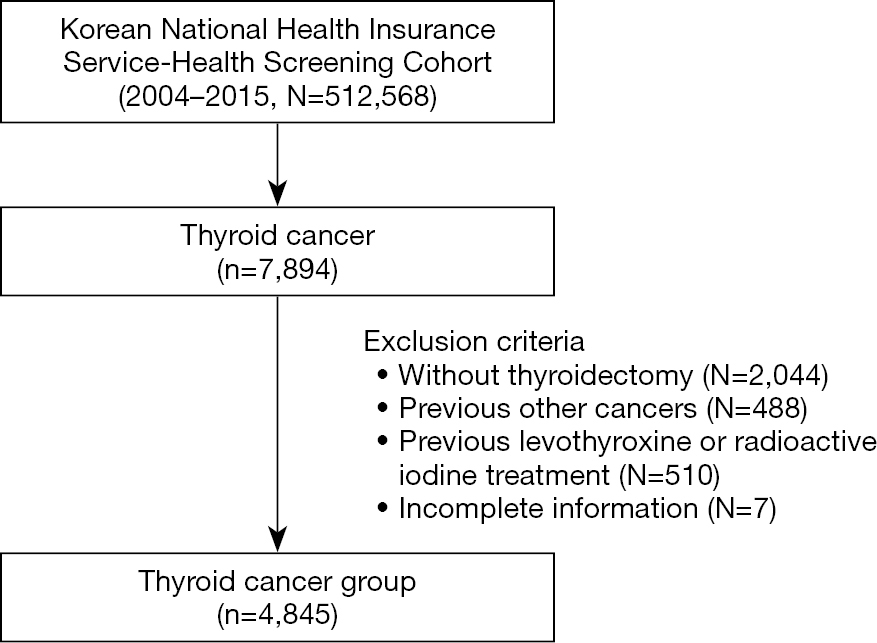 Figure 1 Flowchart of the study design.

This study was approved by the Institutional Review Board of the Korea University Anam Hospital (IRB number: ED16255). Informed consent was not required because this study was based on the NHIS database, which includes fully anonymized and de-identified data. This study was conducted in accordance with the Declaration of Helsinki (as revised in 2013).

We defined follow-up duration as the time between the date of TC claim to the earliest date of incident-specific CVD outcome or the last date of data collection in this cohort (December 31, 2015).

Baseline characteristics of the study population 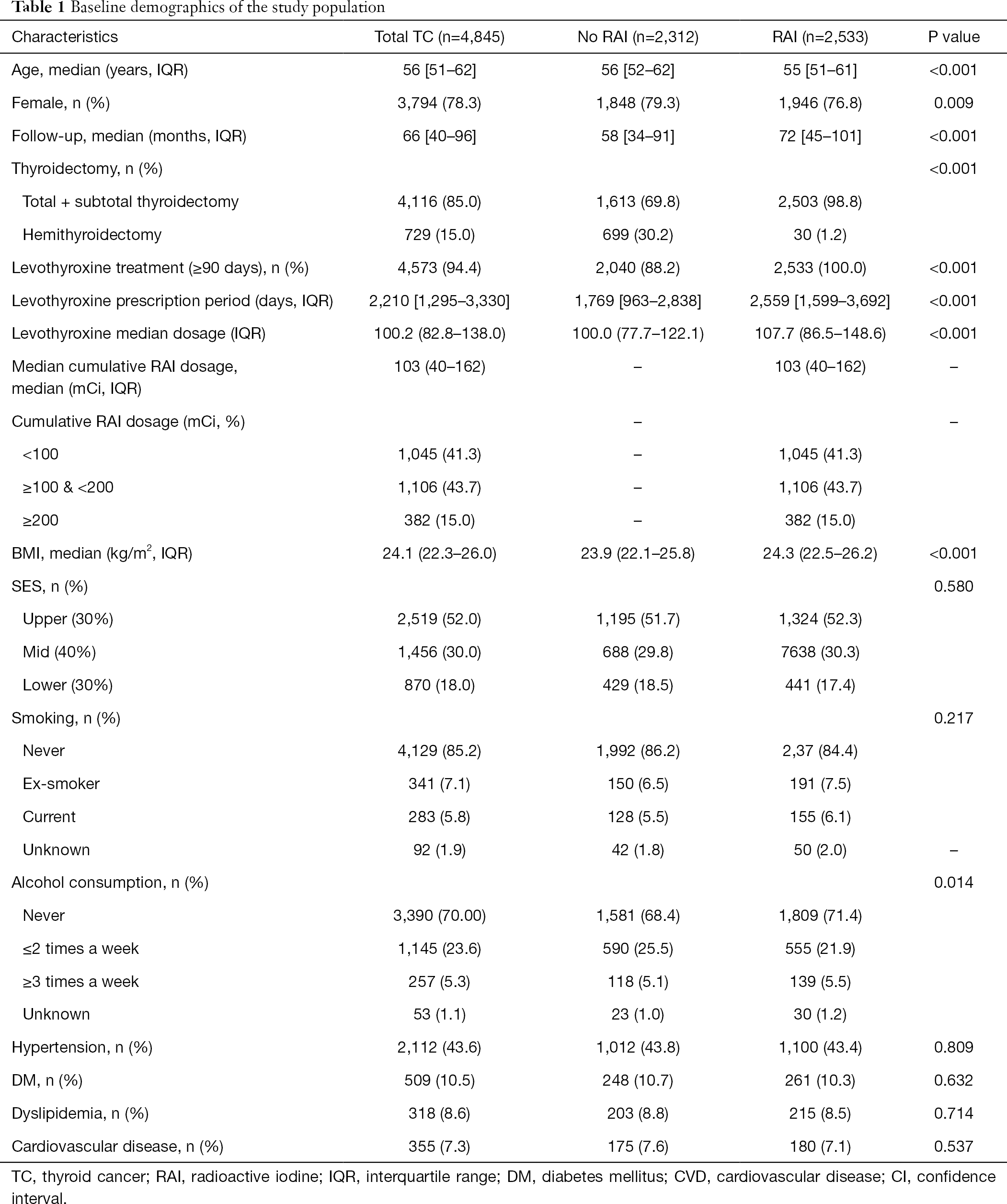 CVD risks in patients with TC according to RAI treatment 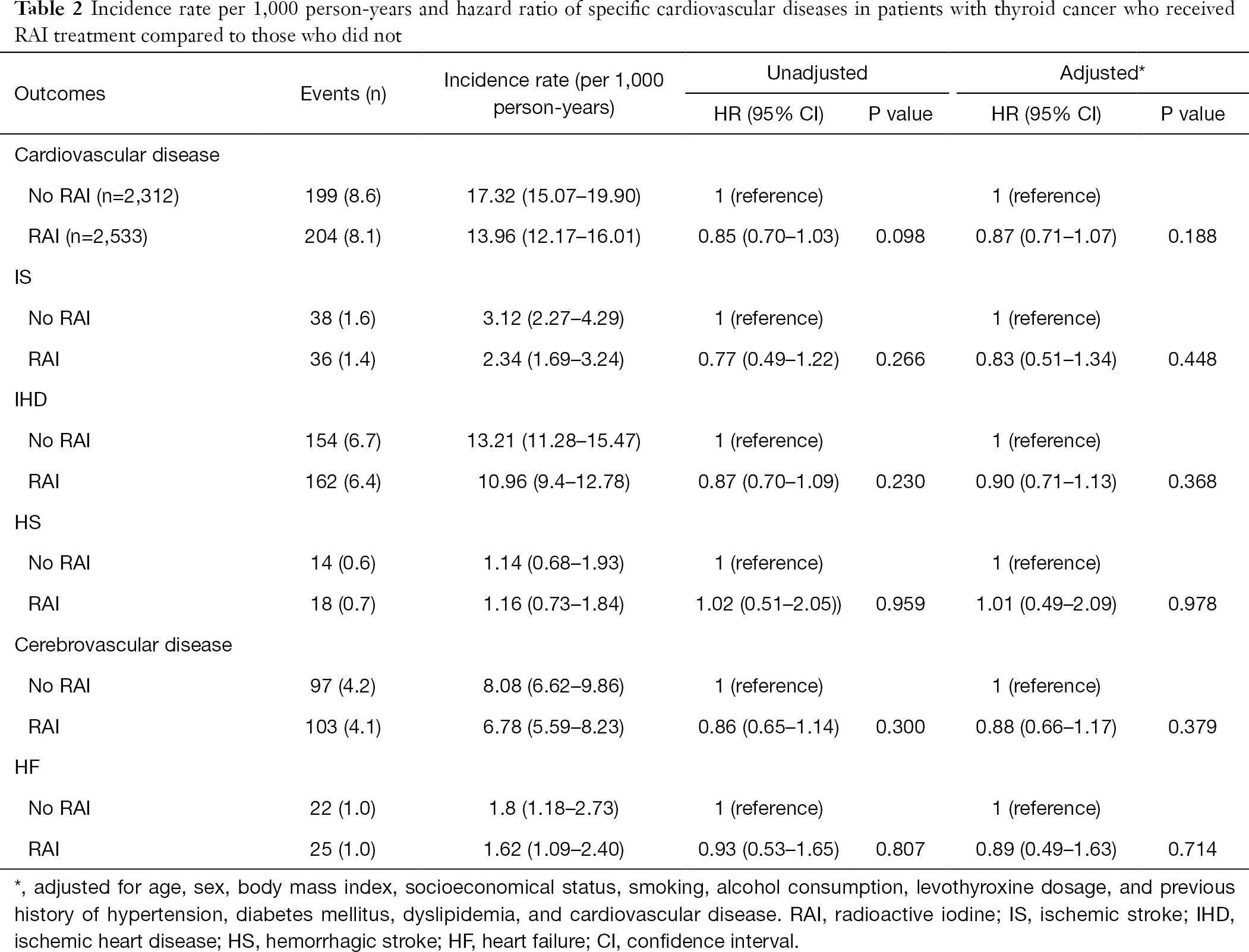 Table 2 Incidence rate per 1,000 person-years and hazard ratio of specific cardiovascular diseases in patients with thyroid cancer who received RAI treatment compared to those who did not
Full table 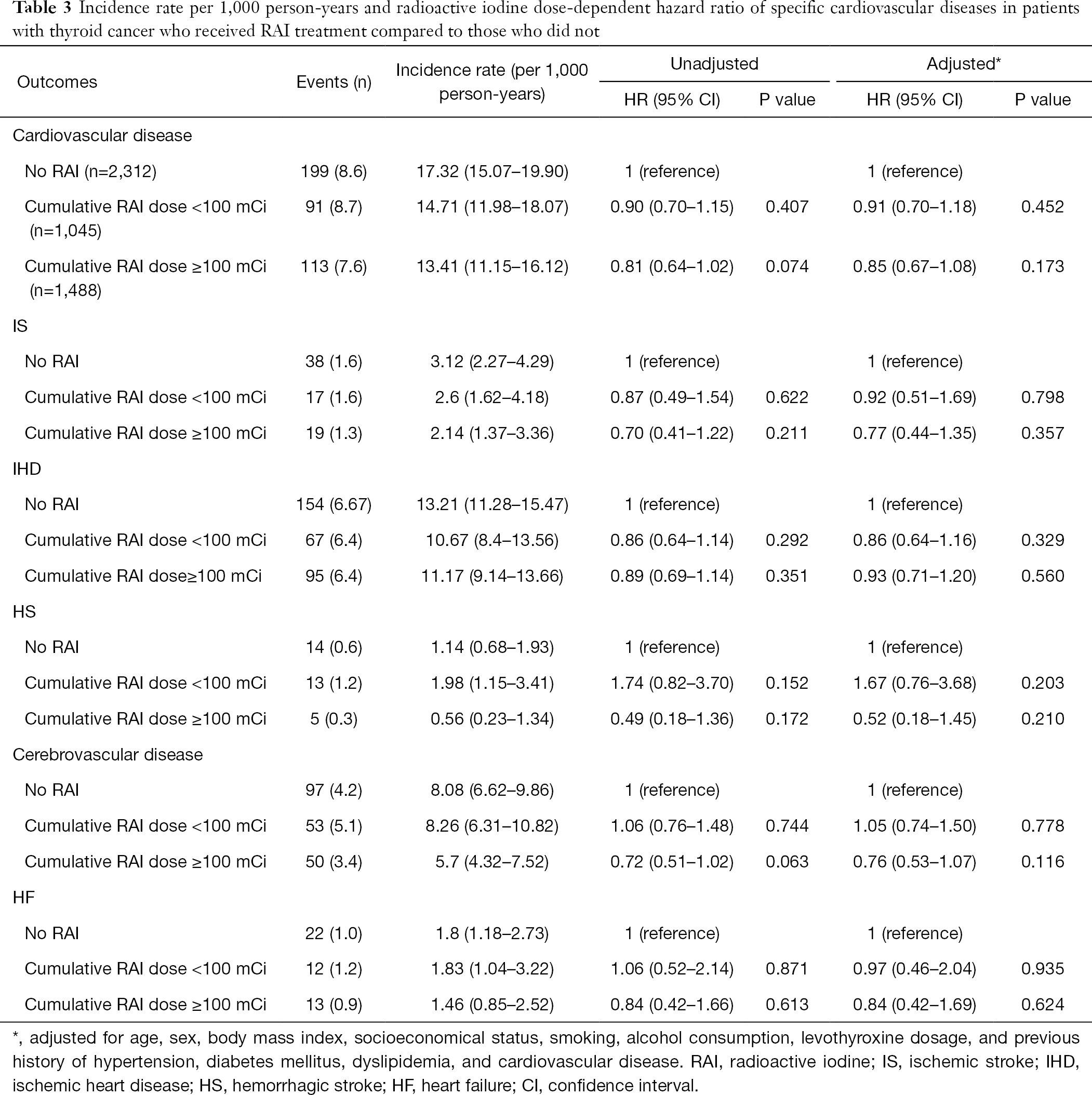 Table 3 Incidence rate per 1,000 person-years and radioactive iodine dose-dependent hazard ratio of specific cardiovascular diseases in patients with thyroid cancer who received RAI treatment compared to those who did not
Full table

Over the past several decades, RAI therapy has been largely used as an essential treatment modality in DTC as it allows for accurate postoperative staging and postsurgical follow-up while yielding better clinical outcomes (13,14). However, the adverse effects of RAI treatment have been much debated, and the RAI therapy-related CVD adverse effects, in particular, have yet to be fully elucidated. To this end, we used a large nationwide cohort database to compare patients who received RAI therapy with those who did not, and found that the risks of composite CVD were not significantly increased in TC patients with RAI therapy.

Previously, la Cour et al. (16) reported an increased risk of cerebrovascular events by comparing >4,000 hyperthyroid and 1,022 euthyroid patients treated with RAI for benign thyroid disorders with 20,540 age- and sex-matched controls over a median follow-up of 11.5 years. In multivariate analyses after adjustments, the HR for cerebrovascular events was 1.17 (95% CI, 1.07–1.28) in hyperthyroid patients and 1.21 (95% CI, 1.02–1.44) in euthyroid patients. It should be noted, however, that the actual values of thyroid stimulating hormone (TSH), which are important discriminative factors between RAI-treated patients and controls for cerebrovascular events, were not included in this study, and the median total dosage of RAI therapy (approximately 11 mCi) was relatively low compared to that used in other studies of patients with TC (9,24). We also postulate baseline patient age, extent of residual thyroid tissue as well as differences in underlying disease contribute discrepancy between two studies. Another recent nationwide cohort study with a 10-year follow-up from Taiwan (24) reported an HR of 0.89 (95% CI, 0.60–1.33) after adjustments for age, sex, and comorbidities, suggesting that 131I treatment for TC did not increase the risk of stroke. These discrepancies are likely due to the studies’ different underlying thyroid diseases, population parameters, and design; therefore, the inconsistent findings concerning higher cerebrovascular disease risk at lower cumulative RAI dosage and no increase risk at higher cumulative RAI dosage requires standardized international studies to acquire definite conclusions.

Unlike previous research, which focused on cerebrovascular diseases, especially IS, our study analyzed the specific CVDs, such as IHD and HF. Ryödi et al. (25) recently reported that hyperthyroid patients treated with RAI remained at higher CVD risk, particularly for HF, compared with patients treated with thyroidectomy. Furthermore, there have been few studies that have focused on coronary artery disease and HF induced by RAI treatment even with higher cumulative RAI dosage. Although more evidence is required, our findings demonstrated that a higher cumulative dosage did not significantly increase the risk of IHD and HF.

In the further analysis, old age and previous histories of HTN and major CVD, which have been well established as risk factors of CVD, were identified as independent risk factors of CVD (Table S2). Interestingly, the levothyroxine median dosage and type of surgery were not related with CVD risk in the patients with thyroid cancer.

Some limitations of this study should also be addressed. First, the relatively short follow-up might have masked the latent adverse effects of RAI therapy that occur 5 or 10 years after exposure, and more careful interpretation is required before reaching definite conclusions because of possible false-negative effects. Another major limitation of this study is the lack of clinicopathological information, such as the tumor stage, pathological subtype, and thyroid-stimulating hormone (TSH) levels, which can affect the treatment course and prognosis in TC. Recently, TSH levels have been reported to be associated with CVD events and CVD-related mortality (9,10,26); therefore, the effects of long-term TSH suppression therapy on CVD risks in patients with TC might have been overlooked. Third, our results cannot be generalized to patients aged <40 and ≥80 years because the NHIS-HEALS cohort only includes patients aged 40–79 years. However, a previous report has demonstrated that the incidence of newly diagnosed TC markedly increases after the age of 45 years (27), and a majority of CVD outcomes usually occur in this population (9,28). Lastly, as a common caveat of claims data, the primary outcomes were based on ICD-10 codes. To reduce the false-positive detection bias, we defined specific primary outcomes along with hospitalization history for each CVD ICD-10 code.

Reporting Checklist: The authors have completed the STORBE reporting checklist. Available at http://dx.doi.org/10.21037/atm-20-5222

Conflicts of Interest: All authors have completed the ICMJE uniform disclosure form (available at http://dx.doi.org/10.21037/atm-20-5222). The authors have no conflicts of interest to declare.

Ethical Statement: The authors are accountable for all aspects of the work in ensuring that questions related to the accuracy or integrity of any part of the work are appropriately investigated and resolved. This study was approved by the Institutional Review Board of the Korea University Anam Hospital (IRB number: ED16255). Informed consent was not required because this study was based on the NHIS database, which includes fully anonymized and de-identified data. This study was conducted in accordance with the Declaration of Helsinki (as revised in 2013).