The optimal treatment algorithm for AFMR remains unclear. Some studies have demonstrated that restoration of sinus rhythm by catheter ablation can mitigate MR (1,9). However, high rate of residual MR at 1-year follow-up have been reported even after the restoration of sinus rhythm (1). Therefore, for AF patients with significant functional MR and progressive heart failure symptoms, catheter ablation may not be sufficient, due to irreversible enlargement of the mitral annulus (10,11). Very few studies have reported on the surgical interventions for AFMR (12). This study aimed to report our clinical experience in the surgical management of AFMR. We present the following article in accordance with the STROBE reporting checklist (available at: http://dx.doi.org/10.21037/atm-20-2958).

All patients underwent a median sternotomy and moderate hypothermic cardiopulmonary bypass. Cardiopulmonary bypass was established via aorto-bicaval cannulation. For surgical ablation (SA), the standard Cox-Maze IV procedure was performed using a Medtronic radiofrequency ablation kit (14-16). The LA appendage was routinely cut and oversewn. The MV was exposed through the inter-atrial groove or atrial septal approach if the tricuspid valve needed intervention. An appropriately sized posterior annuloplasty ring (Cosgrove-Edwards, Edwards Lifesciences) or complete annuloplasty ring (Physio or Physio II, Edwards Lifesciences) was implanted. Subsequently, valve competency was tested by injecting cold saline into the LV across the MV. Concomitant tricuspid annuloplasty was performed if the preoperative tricuspid annulus was larger than 40 mm. Intraoperative transesophageal echocardiography was performed in all cases to evaluate valve competency after repair.

Anti-arrhythmic drugs were administered to all patients after surgery for at least 3 months unless contraindicated. Amiodarone was the first choice. If patients exhibited sinus rhythm at 3 months after surgery, the use of anti-arrhythmic drugs was discontinued. Warfarin was given to all patients with a target international normalized ratio (INR) of 1.8–2.5 in the first 3 months but was stopped if they reverted to sinus rhythm.

Follow-up included outpatient visits and telephone calls. Overall survival (OS) was defined as the interval between the date of surgery and the date of any-cause death. Patients received transthoracic echocardiography (TTE) during follow-up. The latest follow-up TTEs were used as for the postoperative echocardiographic data.

The primary outcome was recurrent MR (greater than a mild-to-moderate degree). Survival distributions and freedom from recurrent MR were calculated according to the Kaplan-Meier method and compared by using the Log-Rank test. Cox proportional hazards models were constructed to calculate the hazard ratios (HRs). Also, we used the multivariable model adjusted by propensity score (PS) and the inverse probability of treatment weighting (IPTW) Cox regression model to reduce bias and estimate the exact effect of SA treatment. IPTW was calculated based on PS to create a pseudo-population in which the distribution of measured baseline covariates was independent of treatment (17). The PS model of SA was constructed by using the multivariable logistic regression model, which included age, gender, preoperative NYHA functional class, AF duration, annuloplasty ring type, annuloplasty ring size, previous ablation, and preoperative MR degree.

Patient characteristics are summarized in Table 1. The mean age of patients was 63.6±7.7 years, which suggested that AFMR patients were typically elderly. The predominant symptom was dyspnea (82.9%) and palpitation (62.2%). At admission, 72.0% of patients presented with NYHA function class III/IV. All patients had persistent AF, and the diagnosis time was 24 (5.8–54.8) months. Three patients (3.7%) had previous catheter ablation therapy. By comparing the preoperative echocardiographic data between the SA group and the non-SA group, we found that the non-SA group tended to larger LAs (51.7±8.3 vs. 58.1±9.0 mm, P=0.003) (Table 1). Also, a more significant proportion of severe MR was found in the non-SA group. 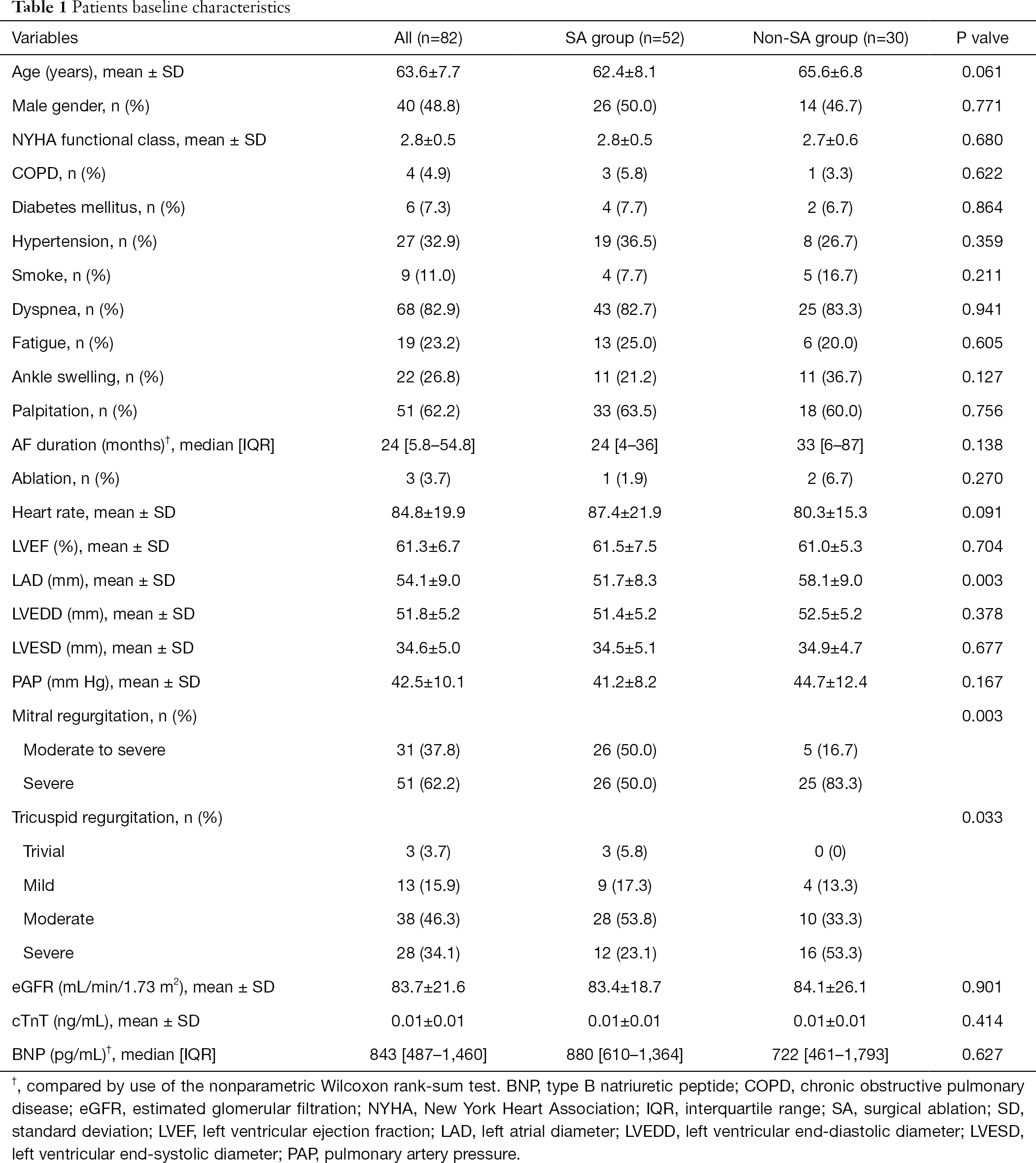 Table 2 shows the surgical data of this cohort. All 82 patients underwent MV repair, and 63.4% received concomitant SA. Consequently, 65.4% of patients had restored sinus rhythm in the SA group, compared to only 10% of patients in the non-SA group (P<0.001). Posterior annuloplasty rings were implanted in 47 (57.3%) patients with a mean size of 30.1±2.0 mm, while complete annuloplasty rings were used in the rest of the patients with a mean size of 29.2±1.8 mm (P=0.027). Additionally, 87.8% of patients underwent concomitant tricuspid annuloplasty. The mean cardiopulmonary bypass time and cross-clamp time in all patients were 110.4±32.8 and 61.2±22.5 minutes, respectively. The concomitant SA increased cardiopulmonary bypass time and cross-clamp time (Table 2). Intraoperative transesophageal echocardiography showed that MV repair was satisfactory without significant systolic anterior motion. There were no cases of in-hospital death, cerebrovascular events, deep sternal wound infection, or acute renal impairment necessitating hemofiltration after surgery.

All patients had at least one TTE examination during follow-up, and the mean TTE follow-up time was 18.6±24.7 months. The follow-up TTE data are summarized in Table 3. Compared to preoperative echocardiography, the LA diameter (LAD) (P<0.001), LVEDD (P<0.001), LVESD (P<0.001) and pulmonary artery pressure (P=0.006) significantly decreased postoperatively, which indicated reverse-remodeling of both the LA and LV. This significant reverse-remodeling was found both in the SA group and the non-SA group (Table 3). 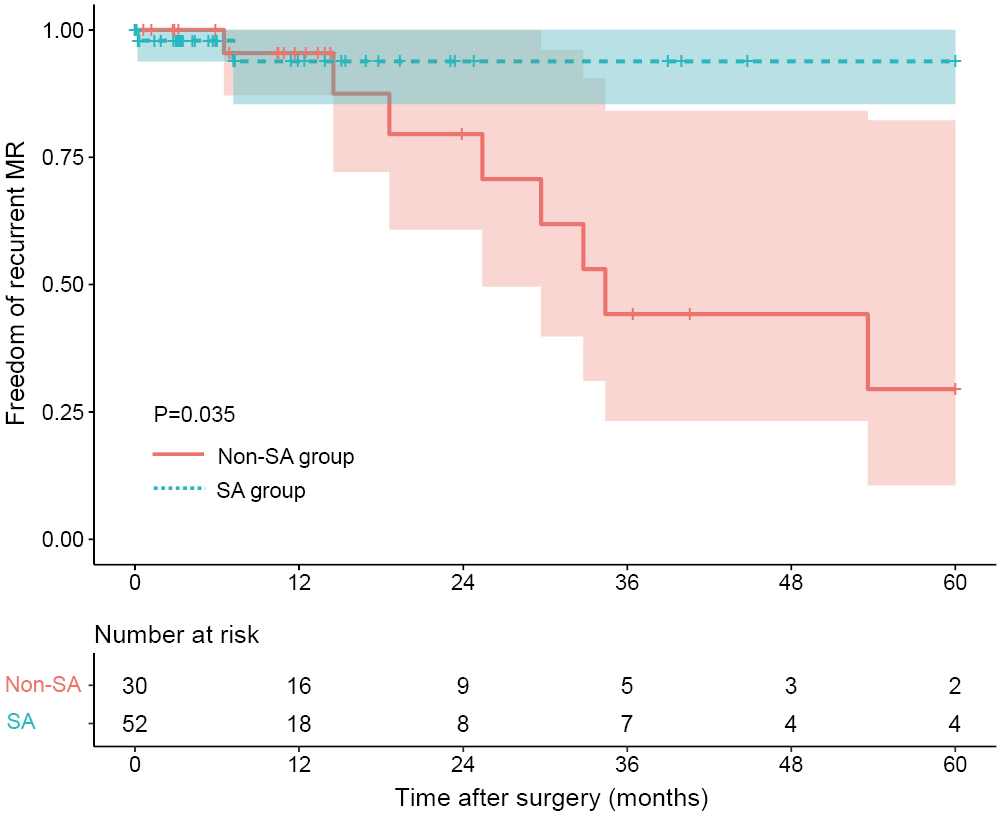 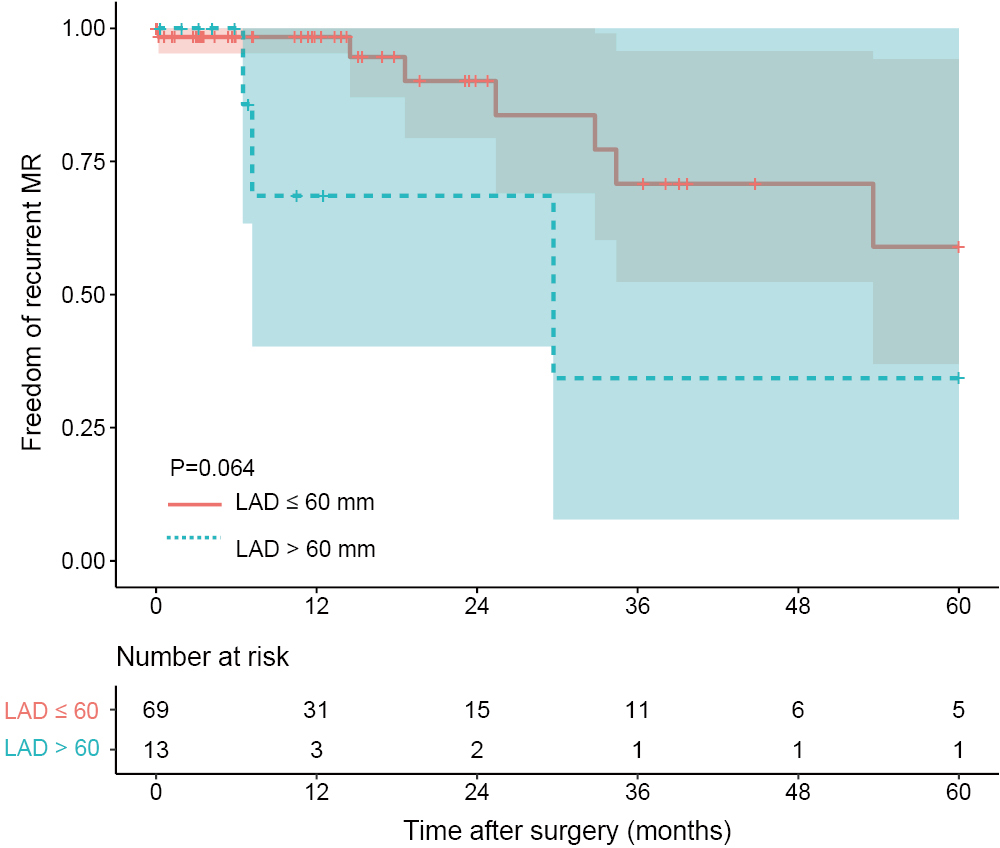 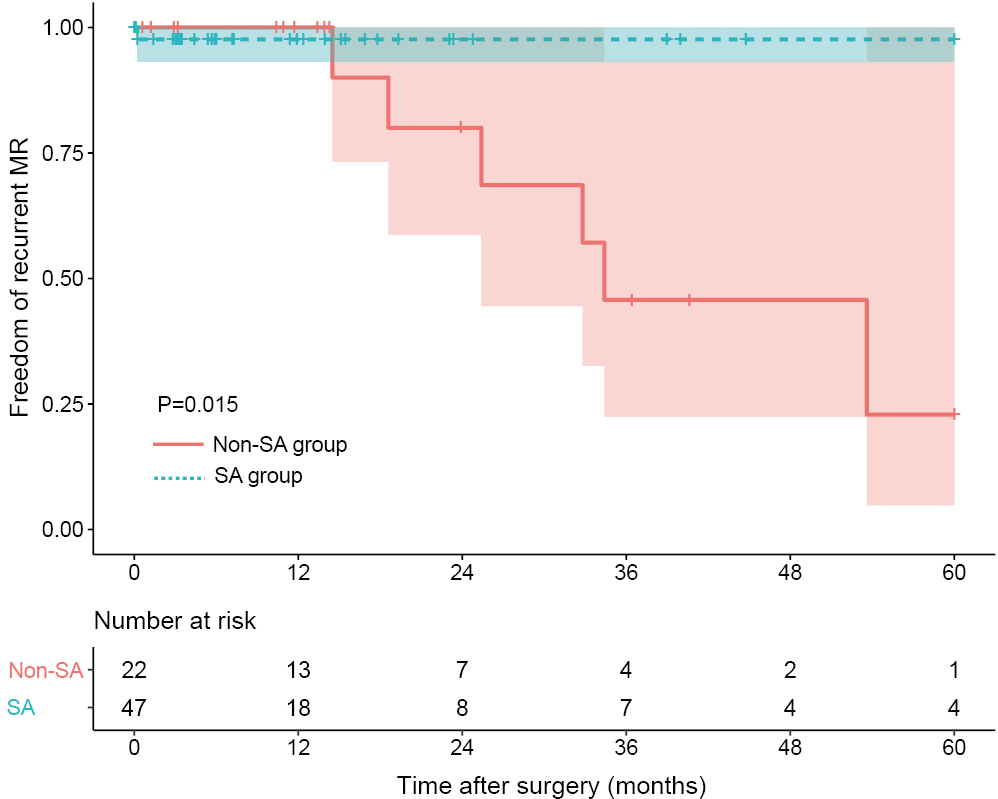 This study aimed to share our observational clinical experience in the surgical management of AFMR. The mid-term outcomes of MV repair for AFMR demonstrate its safety and efficacy by improving heart failure symptoms and inducing reverse-remodeling in both the LA and LV. Furthermore, we found that a concomitant SA procedure may reduce recurrent MR, especially in the small LA group (≤60 mm).

AF is a common cardiac rhythm disorder, found predominantly in elderly patients and heart failure patients. In clinical practice, AF patients occasionally present with moderate-to-severe MR (2,6). AF is a known cause of MR and vice versa, although sometimes it is difficult to identify which pathology manifests first. AFMR patients often present with chronic heart failure symptoms, a progressive disease associated with poor prognosis (10,11,18). Vohra and colleagues reported in their case series that 85% of patients had NYHA functional class III/IV symptoms (12). This is comparable to our cohort, where 82.9% of patients presented with dyspnea, and 72.0% of them were NYHA functional class III/IV.

The optimal treatment for AFMR is still unknown due to a poor understanding of the underlying pathological mechanisms. AF can beget LA enlargement and succeeds in mitral annular dilatation (19). In the context of AFMR, the mitral leaflets are usually structurally normal but morphologically enlarged (6). This means that there are enough leaflets for coaptation if annuloplasty rings are used to downsize the mitral annulus. Some studies have reported on MV repair for AFMR, but the sample sizes were small, and the conclusions were contentious (12,20). In our study, with 10-year of experience in the surgical treatment of AFMR, mid-term outcomes confirmed the efficacy of our technique. The overall 1-year and 3-year freedom from recurrent MR rates were 94.3% and 65.3%, respectively. Consistently, 96.1% of patients were classified as NYHA functional class I/II without obvious heart failure symptoms during the mean follow-up time of 26.1±27.6 months. Furthermore, LA and LV size was significantly reduced, suggesting that our surgical treatment can stop and even reverse cardiac remodeling. In terms of safety, we had no operative deaths or major complications in this study.

AF is the primary etiology and initial driver of AFMR and deserves attention during surgical management. It was reported that restoration of sinus rhythm by catheter ablation could mitigate MR and reverse-remodel LA (1). In a real-world setting, moderate-to-severe AFMR is often associated with long-standing persistent AF and a severely dilated LA and mitral annulus, meaning catheter ablation might be ineffective. Obviously, the decision making is influenced by potential surgical risks by adding Maze procedures and relatively low expectations of successful restoration of sinus rhythm in “sicker” patients. Vohra and colleague reported in their case series that only 7/20 patients underwent a concomitant Maze procedure (12). In our study cohort, 52/82 patients received concomitant Maze procedures. A significant difference in recurrent MR was found between the SA group and the non-SA group.

Furthermore, this significant effect of SA on recurrent MR was only found in the small LA group (≤60 mm) and not in the large LA group (>60 mm) in the subgroup analysis. Appropriate patient selection is a pre-requisite for optimal surgical outcomes. Increased LA wall tension (21) and advanced LA fibrosis (22) may be associated with unsuccessful SA, while also increasing risk to patients. Our results suggest that adding Maze procedures to the standard surgical management of early stage AFMR can significantly help to restore sinus rhythm and achieve optimal long-term results.

For cardiologists or cardiac surgeons, a differential diagnosis with ventricular functional MR (VFMR) (ischemia MR or cardiomyopathy-related MR) is critical, due to the distinctive pathophysiological processes and surgical strategies of these two conditions. Leaflet tethering with the apical shift of the papillary muscle due to adverse LV remodeling and loss of normal leaflet coaptation is the principal pathological mechanism of VFMR. Chordal-sparing MV replacement is now used, preferably over downsizing annuloplasty for VFMR according to the updated 2017 American Heart Association (AHA) guideline (23). AFMR patients usually have normal LV sizes, which is the key differentiator from VFMR. According to the results of the present study, MV repair with concomitant Maze procedure is safe and effective for AFMR.

This study had some limitations. Firstly, this was a single-center retrospective observational study with a relatively small number of patients, although this was the most extensive surgical study on AFMR in the literature. Secondly, the majority of patients underwent surgery in recent years, meaning that follow-up may be too short to assess the long-term outcomes of MV repair. Finally, the underlying mechanisms for the benefit of the concomitant SA procedure remain unclear.

We report on the safety and efficacy of MV repair for AFMR. Analysis of mid-term outcomes demonstrated improved heart failure symptoms and reverse-remodeling of both the LA and LV. A concomitant SA procedure may benefit patients in terms of recurrent MR, especially in the small LA group (≤60 mm).

Reporting Checklist: The authors present the study in accordance with the STROBE reporting checklist. Available at http://dx.doi.org/10.21037/atm-20-2958

Conflicts of Interest: All authors have completed the ICMJE uniform disclosure form (available at http://dx.doi.org/10.21037/atm-20-2958). The authors have no conflicts of interest to declare.

Ethical Statement: The authors are accountable for all aspects of the work in ensuring that questions related to the accuracy or integrity of any part of the work are appropriately investigated and resolved. The study was conducted in accordance with the Declaration of Helsinki (as revised in 2013).The study protocol was approved by the Ethics Committee of Zhongshan Hospital, Fudan University. Because of the retrospective nature of the research, the requirement for informed consent was waived.