Coronary heart disease is one of the leading causes of death in the world. According to the WHO’s World Health Statistics Report 2018, about 17.9 million people died from cardiovascular disease globally in 2016. Surgical myocardial revascularization continues to be the standard of care for patients with 3-vessel or left main coronary artery disease, estimated 800,000 people undergo the surgery worldwide each year (1).

Off-pump coronary artery bypass grafting (OPCAB) was popularized during the late 1990s and the following decade and has become a routine method for coronary revascularization. With “fast track” anesthesia, early extubation has also become the target of such patient’s perioperative management (2). To achieve this goal, Kaplan Heart Anesthesiology recommends keeping the patient’s temperature stable (above 35 °C, and thermal insulation device is recommended to maintain the patient’s normal body temperature) (3). According to statistics, about 50% patients who underwent OPCAB experienced perioperative hypothermia, and about 10% patients suffered their body temperature dropped below 34.5 °C (4). The side effects of perioperative hypothermia have been widely recognized. It causes discomfort to patients, reduces the quality of recovery, changes pharmacokinetics and pharmacodynamics, increases oxygen consumption and cardiovascular system complications, reduces body immunity, causes coagulation dysfunction and so on (5-7). Bleeding, infection, and cardiac events significantly increase patient mortality for patients undergoing coronary revascularization.

However, maintaining the body temperature of OPCAB patients is not an easy task.

Currently, the commonly used thermal insulation devices include the forced-air warming system, the warming blanket, and the warmed intravenous fluids. In OPCAB operation, the effective heating position of the forced-air warming system and the heating blanket is only the back, the head and the neck with small heating area and poor preservation. And the infusion principle avoiding the capacity overload limits the effect of liquid heating devices (8).

Hypothermia still occurs, despite several studies have proved that preoperative warming can reduce the incidence of intraoperative hypothermia (9-12). Not only that, for patients with heart disease, the conventional preoperative medication has further lowered the patient’s central body temperature, and short-term warming treatment before surgery does not completely restore the body temperature. Moreover, oral premedication on the ward lowered core temperature significantly. This drop in core temperature cannot be offset by a short period of active prewarming (13).

From the perspective of clinical operation, pre-warming and intra-operative amino acid infusion can be used for OPCAB surgery; from the perspective of effectiveness, pre-warming before surgery is more helpful to maintain the body temperature in the early stage of the operation, and the intra-operative amino acid infusion is better during the later stage to the end of the operation. Neither of them can completely prevent intraoperative hypothermia. As far as we know, there has been no research on the combination of pre-warming and of amino acids infusion for maintaining perioperative body temperature. Therefore, we hope to conduct a well-designed study on perioperative thermal insulation of cardiac surgery. Therefore, we hope to conduct a well-designed study of cardiac surgery, and combine the advantages of the above two complements, in order to achieve the best thermal insulation effect.

We present the following article in accordance with the CONSORT reporting checklist (available at http://dx.doi.org/10.21037/atm-19-4571).

The study was conducted in accordance with the Declaration of Helsinki (as revised in 2013) and was approved by the Ethics Committee of Zhongshan Hospital Affiliated to Fudan University (ethics approval number: B2016-020). It was designed as a prospective, randomized, double-blind, controlled clinical study.

The inclusion criteria were patients who underwent elective OPCAB surgery between the ages of 18 and 80 without gender limitation, and the body mass index (BMI) was 18–31 kg/m2. All informed consent forms of these patients were signed. Those who do not cooperate or cannot communicate, or had previous respiratory disease, liver and kidney dysfunction, poor glycemic control, and preoperative central body temperature above 37.5 °C were excluded. Patients with intraoperative intra-aortic balloon pulsation (IABP) or changes in extracorporeal circulation bypass were excluded. The study was designed blindly with researchers’ responsibility as follows: Researcher 1, knowing the grouping situation, performing anesthesia and perioperative management; Researcher 2, not recognize the grouping situation, full-time evaluation of perioperative body temperature and other evaluation indicators. Seventy two patients were enrolled and no one was excluded.

After the patient entered the operating room, the sublingual body temperature (Tbase) was measured with mercury body temperature agent. After the induction, the esophageal temperature probe was placed to measure the temperature of the nasopharynx (Tinduc). The nasopharyngeal body temperature was recorded every 30 min during the operation [Infinity Omega monitor, Dräger medical equipment (Shanghai) Co., Ltd.] (T0–T6) to the end of surgery (Tend), and 1h (T7), 2 h (T8) and 4 h (T9) after surgery. Liver and kidney function, intraoperative insulin dose and blood glucose were recorded before and after surgery, and the incidence of cardiac events, wound infection and other complications were recorded and compared between the groups. 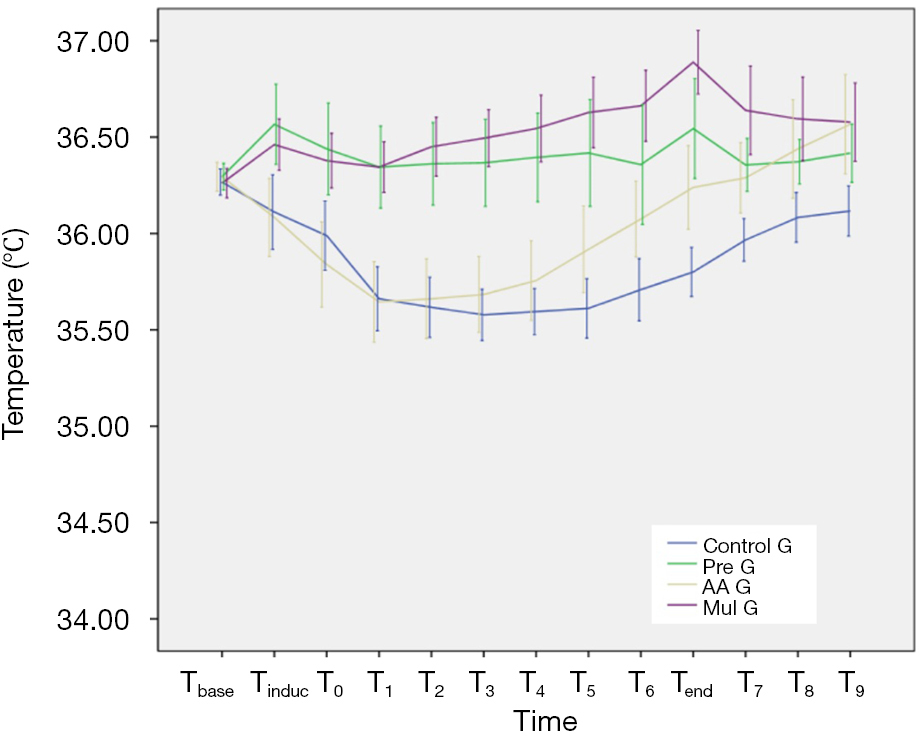 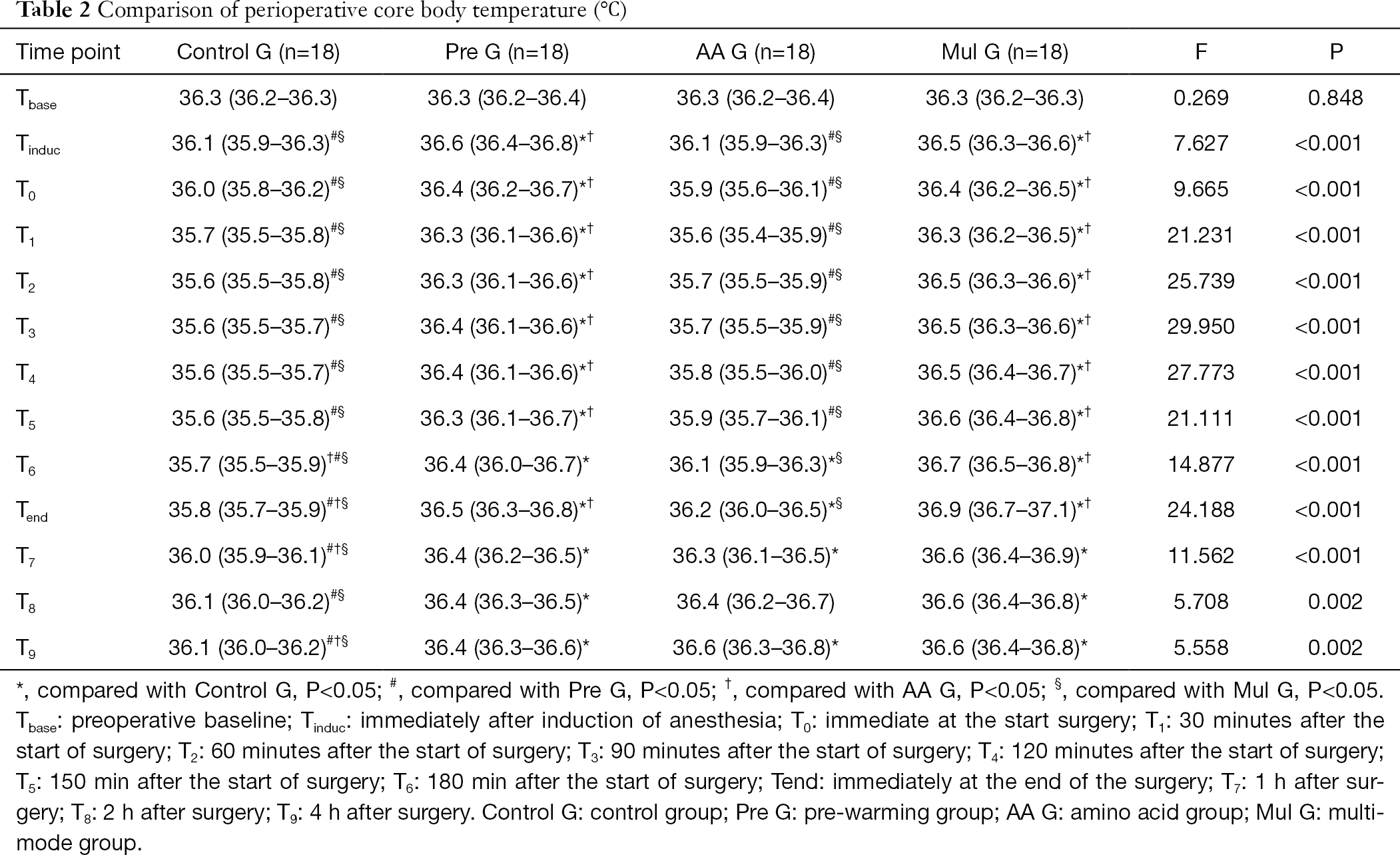 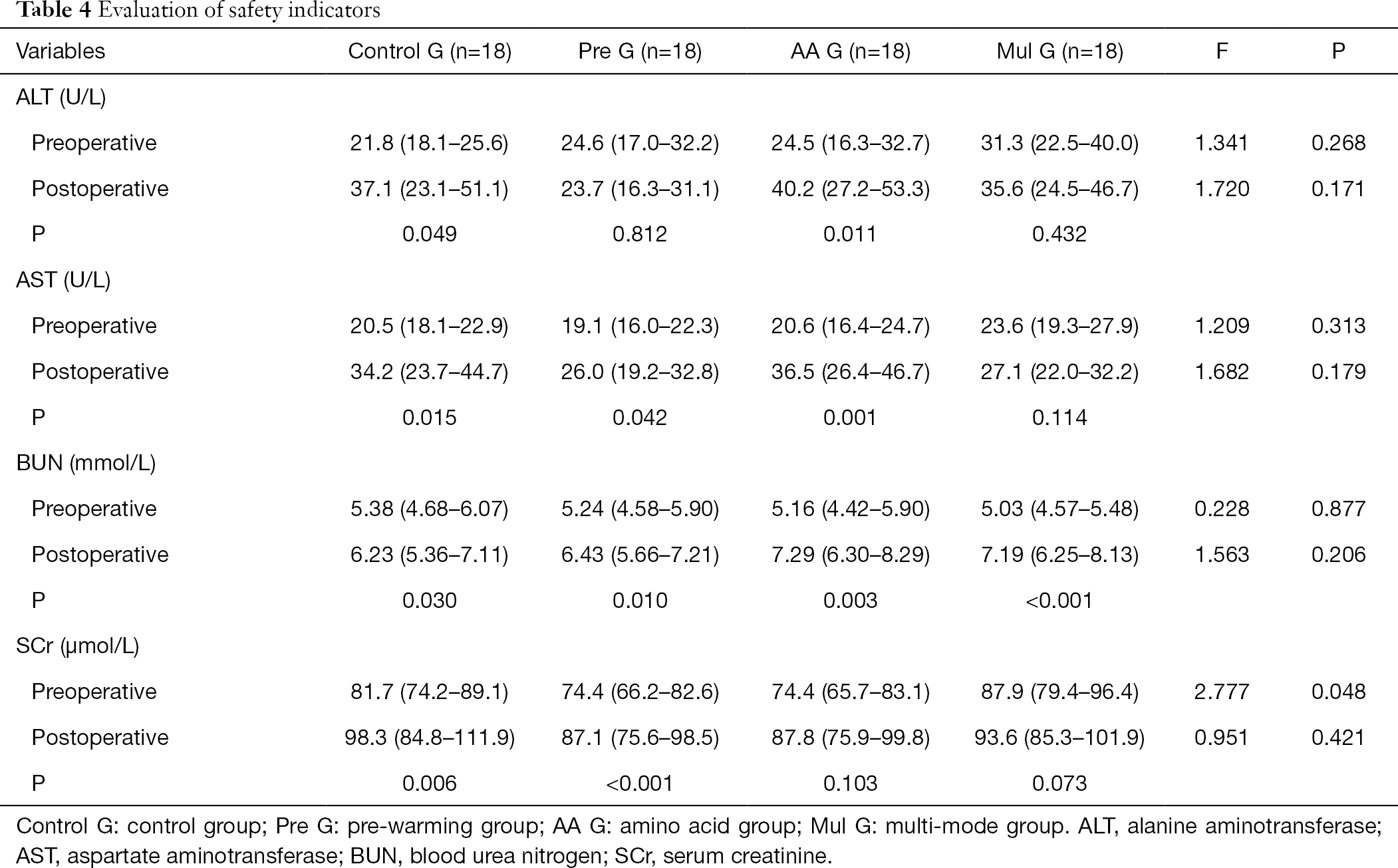 All kinds of non-cardiac surgery have effective perioperative warming measures (23). However, as is mentioned in the introduction, current OPCAB patients have special surgical position, wide disinfection range, long surgery time, and the warming effect of intraoperative warming measures and liquid heating equipment are limited. In recent years, a number of prospective or retrospective studies have indicated that pre-warming patients for 30 min with forced-air warming system can effectively reduce the degree of intraoperative hypothermia (9-11). Since the amino acid has the highest nutrient-induced thermogenesis (NIT) which is up to 30% to 40% in awake state, amino acids injection during surgery was attempted to improve the perioperative hypothermia caused by anesthesia and surgery. In 2006, exogenous amino acid was used in OPCAB surgery by Japanese researchers Umenai T and Nakajima Y, with the infusion of 4 kJ/kg/h for 6 h at 2 h before induction, which came to the result that the perioperative core body temperature of the test group was about 0.5 °C higher than that of the control group, while the test group still experienced a lowest temperature of 35.4 °C at 2 h after induction (14). For more than 10 years, our research team has conducted a series of studies on the advantages and disadvantages of perioperative infusion of amino acid. It is suggested that intraoperative amino acid infusion is beneficial to maintain normal perioperative temperature in patients undergoing gastrointestinal surgery without increasing the risk of hyperglycemia or causing damage to liver and kidney function. It is safe to prevent perioperative hypothermia (15). In 2008, amino acid was also reported in related applications in OPCAB (16). Therefore, through comprehensive analysis of various current thermal insulation measures, two warming measures of pre-warming and/or amino acid treatments were selected by us to manage perioperative body temperature in patients with OPCAB.

According to this study, we first found that the perioperative changes in body temperature in Control G patients are consistent with the literature (23). Pre-warming the patient with a blanket before anesthesia clearly avoids hypothermia during the whole perioperative process from anesthesia induction to the end of surgery. Intravenous infusing amino acid solution after anesthesia induction can’t avoid hypothermia after anesthesia induction, but it significantly helps to shorten the hypothermia duration and to rapidly rise postoperative body temperature to preoperative level. And the combination of the two methods complementary contributes to avoiding the hypothermia process during operation and to maintaining the late intraoperative and postoperative body temperature. Thus, the advantages and disadvantages of using these two methods of insulation separately or in combination in OPCAB surgery are obvious. Both Emmert et al. (24) and Jildeh et al. (25) stated that the perioperative hypothermia incidence rate exceeds 50%, and the related risk factors include old age, prolonged induction time, small body surface area, low BMI, regional block, etc., however, time is not a risk factor for perioperative hypothermia. Therefore, for OPCAB patients with good general conditions, the pre-heating method alone can effectively keep the patient warm. If the patient is high-risked in perioperative hypothermia with factors such as old age and low BMI, intravenously infusion of amino acid can be given along with pre-warming to achieve better warming.

In addition to the analysis of the warming effects of each group of patients, patient’s glucose metabolism and perioperative liver and kidney function were also assessed with short-term prognosis.

Different types of amino acid have different effects on glucose, insulin secretion and the demands for exogenous insulin are also different. In this study, the most commonly clinically used 18-amino acid complex was chosen. It was found that in order to maintain normal blood glucose levels, patients with perioperative infusion of amino acid requires more transfusion of exogenous insulin, which matches the results of our earlier studies (15,26).

Postoperative renal insufficiency is one of the common postoperative complications of OPCAB (27). Compared with 18-amino acids commonly used in clinical practice, essential amino acid complex (9-AA) and branched-chain amino acid complex (3-AA) are more suitable for patients with renal insufficiency. None of the patients enrolled in this study had any evidence of liver and kidney dysfunction before surgery. The results showed that pre-warming treatment and intravenous infusion of 18-amino acid did not affect the perioperative liver and kidney function. Therefore, 18-amino acid can be safely used for OPCAB patients with normal preoperative liver and kidney function. This conclusion has also been supported by the literature (16).

Hannan et al. (4) retrospectively analyzed 2,294 OPCAB patients in New York in 2007 and found that postoperative respiratory complications in patients with perioperative hypothermia were associated with increased incidence of reoperating, prolonged hospital stay, and increased mortality. A similar conclusion was also reached by a prospective observational study this year: perioperative hypothermia associates with increased blood loss, delayed wound healing, increased surgical-related infection, and prolonged hospital stay (28). The study followed up the short-term prognosis of patients (Table 5). Because the sample size of each group was small, there was no statistical difference between the groups.

There were still some limitations in this study. Firstly, this study was a single-center study with a small sample size. Secondly, while the single surgical team involved in this study was beneficial to reduce the individual differences caused by surgery, it affects the promotion of treatment effects. Thirdly, the study only investigated on the perioperative insulation measures without more in-depth topics such as the warming mechanism. The next research objective includes clinical research and fundamental research. We plan to conduct a multi-center, large-sample clinical studies, and adopt prognostic analysis and stratification analysis, so as to identify the optimal thermal insulation method for different characteristic groups. It is also important to do fundamental research of mechanism of amino acid insulation.

Pre-warming before anesthesia and/or intraoperative infusion of amino acid can effectively reduce the perioperative hypothermia of OPCAB patients. Pre-warming before anesthesia has better thermal insulation effect, and 18-amino acid can also be safely temporarily used for OPCAB patients with normal liver and kidney function before surgery. The combination of the two methods can achieve the best thermal insulation effect.

Reporting Checklist: The authors have completed the CONSORT reporting checklist. Available at http://dx.doi.org/10.21037/atm-19-4571

Conflicts of Interest: All authors have completed the ICMJE uniform disclosure form (available at http://dx.doi.org/10.21037/atm-19-4571). The authors have no conflicts of interest to declare.

Ethical Statement: The author is accountable for all aspects of the work in ensuring that questions related to the accuracy or integrity of any part of the work are appropriately investigated and resolved. The study was conducted in accordance with the Declaration of Helsinki (as revised in 2013) and was approved by institutional ethical committee of Zhongshan Hospital, Fudan University (ethics approval number: B2016-020), and informed consent was taken from all the patients.