Although the common causes of obstructive jaundice are choledocholithiasis and pancreatic cancer in the head of the pancreas, there have been some cases reporting obstructive jaundice caused by infection (1-3). Deep tissue infection usually develops in the individuals who are immunologically compromised or chronically ill, while a few cases reported in the immunocompetent patients. Those patients were diagnosed preoperatively, confirmed by fungal culture or percutaneous biopsy. Indeed, our patient was not suspected with fungal infection initially, as he had no respiratory or urinary infection in the recent 2 years, and no typical symptoms of infection such as fever and chills on his admission. Both laboratory and imagological findings indicated that he developed a malignant tumor. In such situation, we performed the pylorus preserving pancreaticoduodenectomy (PPPD) and found the fugus at the site of duodenum ampulla and distal common bile duct present article by postoperative histopathological examination. It was quite difficult to make correct diagnosis without a surgery biopsy. Summary, we reported fungal infection manifested as malignant obstructive jaundice in an elderly person.

We present the following article in accordance with the CARE reporting checklist (available at http://dx.doi.org/10.21037/atm-20-1937).

A 79-year-old male complained of upper abdominal discomfort, darkened urine, itching, yellow discoloration of the eyes, and a 5 kg weight loss in one month. The patient had a history of radical resection for esophageal carcinoma at 5 years ago, without given chemotherapeutics. He had no respiratory or urinary infection in the recent 2 years. 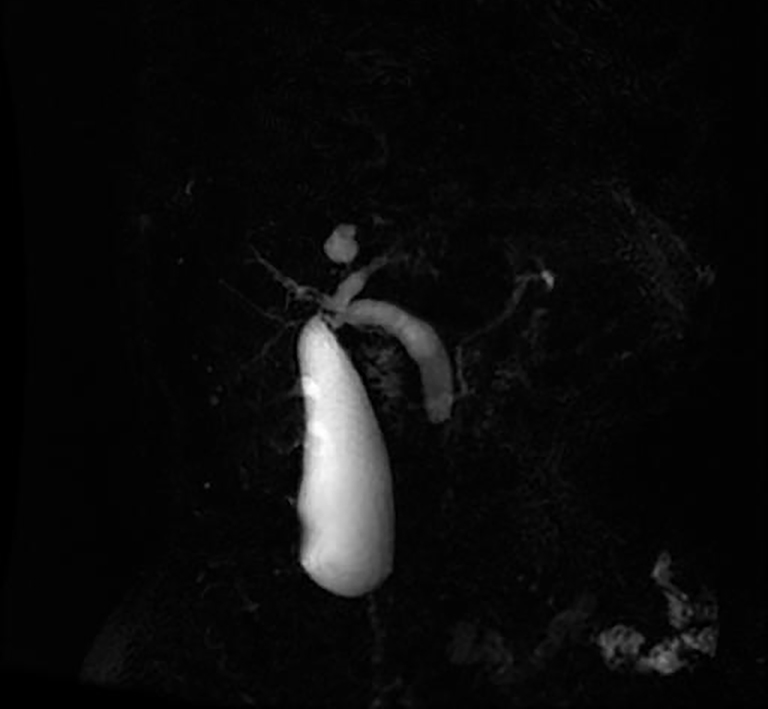 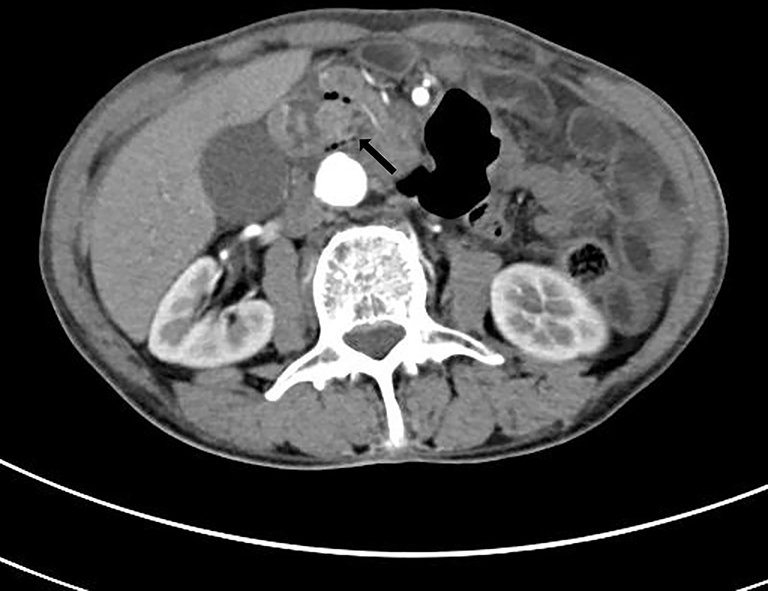 As highly suspected to be malignant obstructive jaundice, he received PPPD and the specimens was subject to histopathological examination subsequently. As shown in Figure 3, clusters of bluish-stained fungal colonies, spores and hyphae with acute inflammation were found at the site of duodenum ampulla and distal common bile duct (Figure 3). Fungal infection of ampulla of Vater was ultimately diagnosed, but no evidence of malignance was found by post-operative. Combination therapy of fluconazole (400 mg/d, intravenous, 3 weeks), sulperazone (6 g/d, intravenous, 1 week) and tinidazole (2 g/d, oral, 1 week) was given to this patient. He recovered well and discharged from hospital 3 weeks later. No fungal infection or tumor recurrence was observed during the 2-year follow-up. 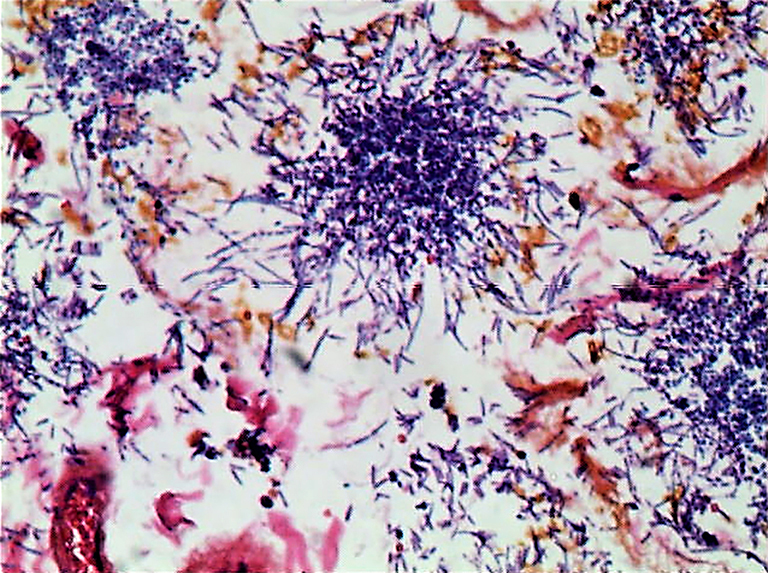 We reported an interesting case that fungal infection manifested as malignant obstructive jaundice in an elderly person.

All procedures performed in studies involving human participants were in accordance with the ethical standards of the institutional and national research committees, and with the Helsinki Declaration (as revised in 2013). Informed consent was obtained from the patient for the publication of their information and imaging.

In the present article, we reported an interesting case that fungal infection manifested as malignant obstructive jaundice in an elderly person, who had a history of esophageal carcinoma. Deep fungal infection usually develops in immunocompromised hosts, such as patients infected with HIV, or treated with long term broad-spectrum antibiotics or chemotherapeutics. No such risk factors were found in this present case, and this patient had no respiratory or urinary infection in the recent 2 years. Indeed, immunology is close to cancer. The decline of immunology function in the elderly could contribute to his past esophageal carcinoma development. A major limitation of our study is hard to define this 79-year-old male as immunocompetent or immunocompromised.

A radical surgery for esophageal carcinoma was performed on the patient 5 years ago. Recently, it was reported that unilateral endogenous fungal endophthalmitis occurred 2 months after esophageal cancer surgery (4), which indicated a possible relationship between the digestive tract surgery and the fungal infection. Impaired emptying of the gastric remnant following gastric resection and vagotomy could be responsible for the development of gastric mycosis (5). However, the underlying mechanism remains to be further studied.

Obstructive jaundice is characterized by an obstruction of the intrahepatic or extrahepatic biliary system. Most common causes include pancreatic and duodenal periampullary cancer. In addition, choledocholithiasis, stricture of the common bile duct, biliary atresia, pancreatitis, pancreatic pseudocyst, and parasite infection can lead to obstructive jaundice as well. In some cases, the differential diagnosis of inflammation and malignant tumor is difficult even under intraoperative biopsy. For example, tuberculosis of portal masses (6) had been reported to compress the common bile duct, performing like the malignance. The accurate diagnosis relies on the post-operative histopathological examination of whole-mount serial sections. The present case was preoperatively highly suspected with malignant obstructive jaundice, as supported by a lesion in distal common bile duct with typical arterial enhancement revealed by the CT scan, high levels of serum CA19-9, and history of esophageal carcinoma.

Reporting Checklist: The authors have completed the CARE reporting checklist. Available at http://dx.doi.org/10.21037/atm-20-1937

Ethical Statement: The authors are accountable for all aspects of the work in ensuring that questions related to the accuracy or integrity of any part of the work are appropriately investigated and resolved. All procedures performed in studies involving human participants were in accordance with the ethical standards of the institutional and national research committees, and with the Helsinki Declaration (as revised in 2013). Informed consent was obtained from the patient for the publication of their information and imaging.