Anaplastic thyroid cancer (ATC), one of the deadliest of all cancers, is responsible for as much as 14–39% of mortality caused by thyroid cancer (1,2). Approximately 50% of ATC patients present with distant metastasis, and the disease has a median survival of a mere 5 months (3,4). ATC responds poorly to traditional therapies; however, dabrafenib and trametinib is the first targeted regimen to receive approval by FDA and achieved an overall response rate of 69% in a phase II clinical trial,, significantly improving the survival of ATC patients with BRAF mutation (5). Thus, understanding the molecular mechanisms underlying the initiation and progression of ATC is important and would help us to identify potential molecular targets for treating the disease.

Owing to the rarity of ATC and its extensive infiltration by macrophages, studying the genetic landscape of ATC presents a significant challenge (6). Several studies based primarily on genomic analyses have reported multiple mutations in oncogenes and tumor suppressors in ATC (7,8). Recent studies have shown that the TERT promoter mutation was one of the most frequently identified mutations in ATC along with the BRAFV600E and RAS mutations (9). Nevertheless, only 3% of RNAs are protein-coding messenger RNAs and the rest 97% RAN molecules are non-coding RNAs (ncRNAs) (10).

Long non-coding RNAs (lncRNAs) are a class of ncRNAs that exceed 200 nt in length. LncRNAs are widely expressed in human tissues and are strongly associated with cancer progression (11). HATAIR, for instance, which is a lncRNA that is overexpressed in multiple cancers, promotes cancer invasiveness and metastasis via interaction with PRC2 and silencing of anti-metastatic genes (12). However, the role of lncRANs in ATC tumorigenesis is unclear. Recently, a small number of lncRNAs have been linked with ATC. One study identified a low expression of the lncRNA PTCSC3 in ATC tissues and cells. Meanwhile, the overexpression of PTCSC3 inhibited the drug resistance of ATC to doxorubicin via the STAT3/INO80 pathway (13). Another study identified 19 upregulated and 28 downregulated lncRNAs in 9 ATC samples compared with normal tissue. Of these lncRNAs, PAR5 exerted a tumor-suppressive effect in ATC by impairing the oncogenic activity of EZH2 (14).

In the current study, we performed whole transcriptome sequencing of three ATC and two normal thyroid (NT) tissue samples and characterized the lncRNA expression profile of ATC. We subsequently defined the role of a lncRNA, mitotically associated long non-coding RNA (MANCR), in ATC. We believe that this study will reinforce our understanding of lncRNAs in the initiation and progression of ATC.

We present the following article in accordance with the MDAR reporting checklist (available at http://dx.doi.org/10.21037/atm-20-4530).

Three ATC and two NT tissue samples were sequenced. Total RNA from the samples using TRIzol reagent (Invitrogen Inc., CA, USA). Ribosomal RNA was removed from total RNA with Ribo-Zero Gold (Illumina, San Diego, CA, USA) before the construction of RNA-seq libraries. Comparisons of transcriptome library sequencing data and human reference genomes were performed with TopHat (http://tophat.cbcb.umd.edu/), and gene expression was quantified with HTSeq (https://pypi.org/project/HTSeq/). The sequencing data was mapped with TopHat2 software, and the expression counts of each lncRNA were determined by HTSeq. DEseq2 was used to analyze the differential expression profiles of the lncRNAs based on the gene counts.

The SW1736, C643, and BCPAP cells were grown in RPMI 1649 medium; the CAL-62, BTH101, K1, BCPAP, Nthy-ori3-1 cells were grown in DMEM medium; and the 8305C cells were grown in MEM medium. All cells were cultured with 10% heat-inactivated fetal bovine serum (FBS), 100 IU/mL penicillin, and 10 µg/mL streptomycin at 37 °C with 5% CO2. MANCR was knocked down in SW1736 cells with two ASOs designed by and purchased from Ribobio Co., Ltd (Guangzhou, China). (Table S1). MANCR overexpression construct was used to overexpress MANCR in SW1736 cells, and an empty vector was used as the negative control. After 24 h of transfection, all cells were harvested for further analysis.

Cell proliferation was analyzed by cell counting Kit-8 (CCK-8) assay (Sigma-Aldrich; Merck KGaA). After 24 h of transfection, SW1736 cells were seeded in 96-well plates. An aliquot of 10 µL of CCK-8 solution was added to each well and the plate was incubated at 37 °C for 4 h. The absorbance reading was performed at 450 nm using a spectrophotometer (Thermo Scientific TM NanoDropTM 8000; Thermo Fisher Scientific, Inc., MA, USA) every 24 h. Five replicates were measured for each experimental group.

Transwell assay (Corning, Tewksbury, MA, USA) was performed to evaluate cell invasion ability. Cells were seeded into the upper chamber of a Matrigel-coated (Sigma-Aldrich) insert, and medium containing 10% FBS was placed into the lower chamber as chemoattractant. After 24 h of incubation at 37 °C, the invaded cells were fixed with methanol and then stained with 0.5% crystal violet. The images of the cell were obtained with an IX71 inverted microscope (Olympus, Tokyo, Japan).

Whole transcriptome sequencing of three ATCs and two adjacent NT samples was conducted. In one case, the ATC had completely replaced the thyroid and therefore no adjacent NT was collected. The expression profiling of the lncRNAs is illustrated in Figure 1A,B. Of 11,085 sequenced lncRNAs, 182 lncRNAs were identified to be differentially expressed in ATC compared with NT. Among these lncRNAs, 67 were upregulated (P<0.05), and 115 were downregulated in ATC (P<0.05). Of the downregulated lncRNAs, PTCSC3 (P<0.001) was reported as a tumor suppressor in PTC (16), while the overexpression of PTCSC3 inhibited the drug resistance of ATC to doxorubicin (13). LINC00982 (P<0.001) was a divergent transcript of RDM16 and a biomarker for poor survival in lung adenocarcinoma and gastric cancer (17,18). Meanwhile, ADAMTS9-AS2 (P<0.001) was a tumor suppressor in multiple cancers and was associated with the PI3K/AKT pathway (19,20). Of the upregulated lncRNAs, mitotically associated long non-coding RNA (MANCR or LINC00704) (P=0.0016) was related to cell division in aggressive breast cancer (21). 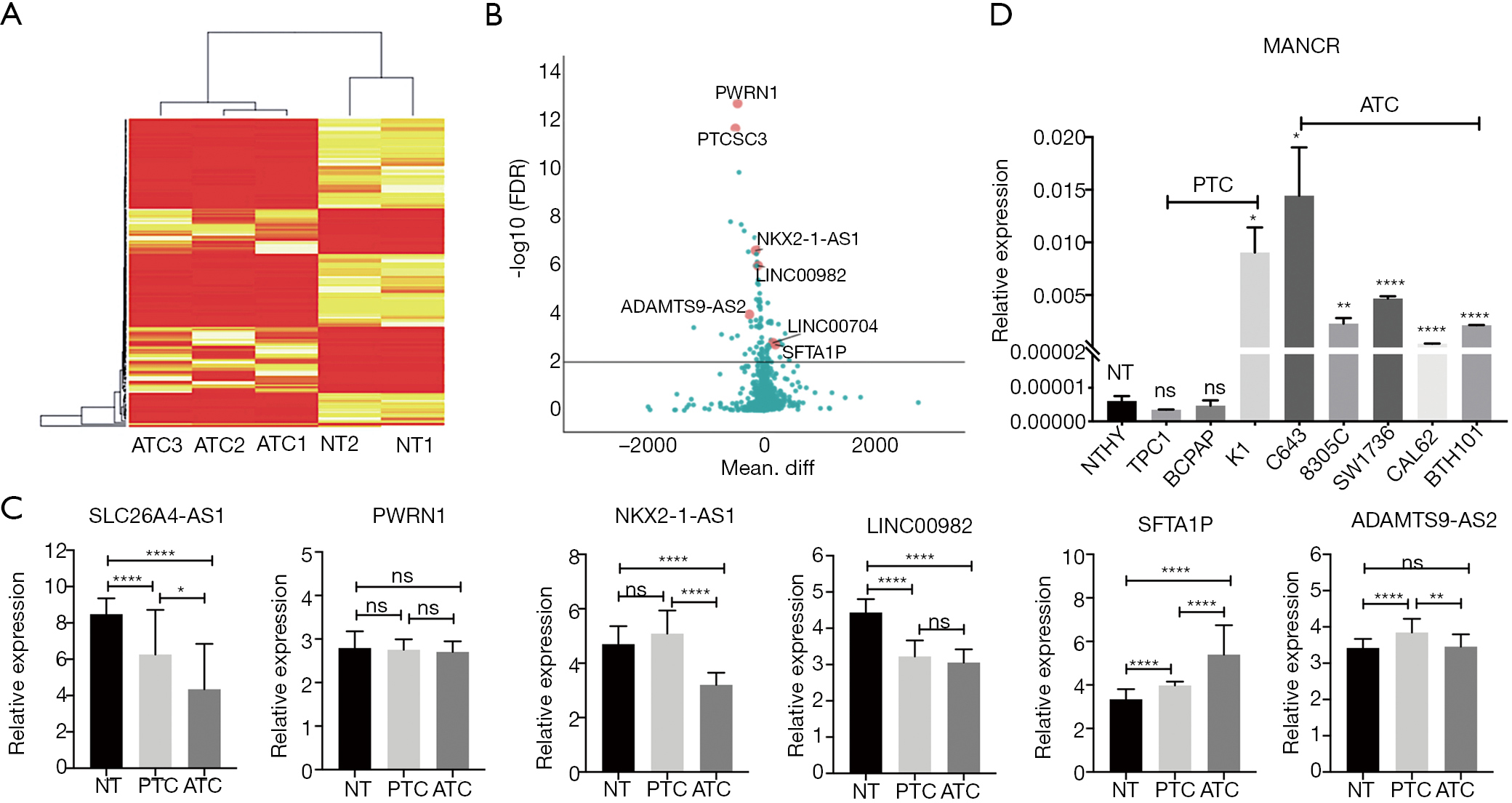 Since MANCR was not an annotated lncRNA in the GEO datasets, we used the TCGA 495 PTC cohort for clinical validation. MANCR overexpression was correlated with extrathyroidal extension (ETE, P=0.0029) and AJCC T stage IV (P=0.0009); however, it had no association with lymph node metastasis, distant metastasis, or disease-free survival (Figure 2A).

Next, MANCR expression was validated using the sequencing data of poorly differentiated thyroid cancer (PDTC), PTC, and adjacent NT samples. This cohort comprised five PDTC tissues, five PTC tissues, and five NT tissues, as was reported previously (22). Interestingly, the expression level of MANCR was similar in the NT and PTC samples (P=0.7591), and its expression was significantly elevated in the PDTC samples compared with the NT (P=0.0107) and PTC (P=0.0106) samples (Figure 2B). These results indicated that MANCR was an oncogene in ATC/PDTC.

MANCR is a tumor promoter in ATC

In order to define the biological role of MANCR in ATC, MANCR was transiently knocked down and overexpressed in SW1736 cells using ASOs and MANCR overexpression construct (Figure 3A). After 24 h of transfection, CCK8 assays were performed. Following knockdown, MANCR was shown to significantly inhibit the proliferation of SW1736 cells. Similarly, MANCR overexpression could increase cell proliferation in SW1736 cells (Figure 3B). Moreover, the results of the Transwell assays demonstrated that the knockdown of MANCR with both ASO1 and ASO2 in SW1736 cells decreased their invasive ability compared with the negative controls (Figure 3C). Finally, flow cytometry analyses were performed, showing that the knockdown of MANCR could induce cell apoptosis in SW1736 cells (Figure 3D). These results demonstrated that MANCR is a tumor promoter in ATC, in which it increases cancer cell proliferation and invasion and decreases apoptosis. 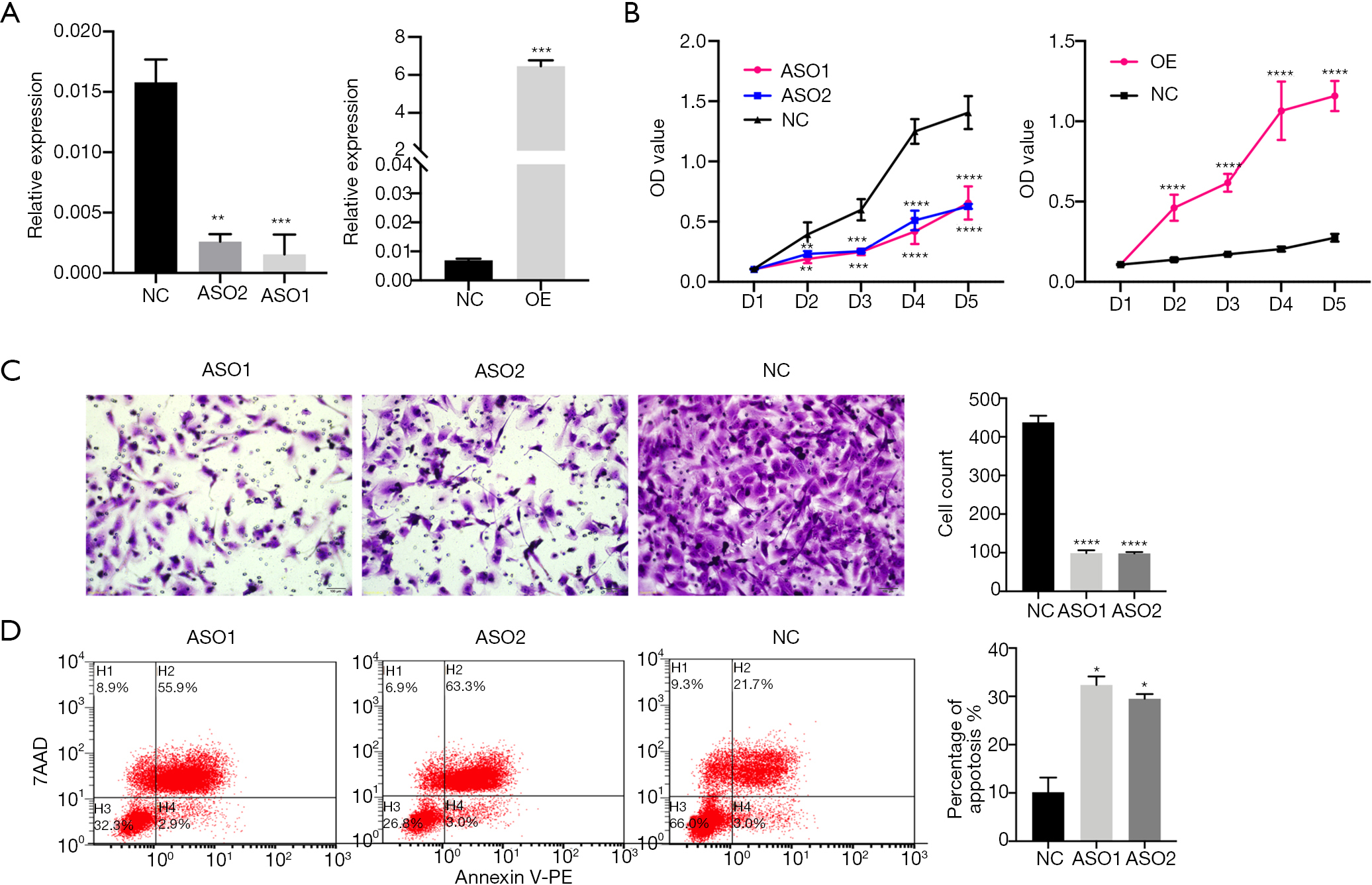 MANCR is related to cell cycle 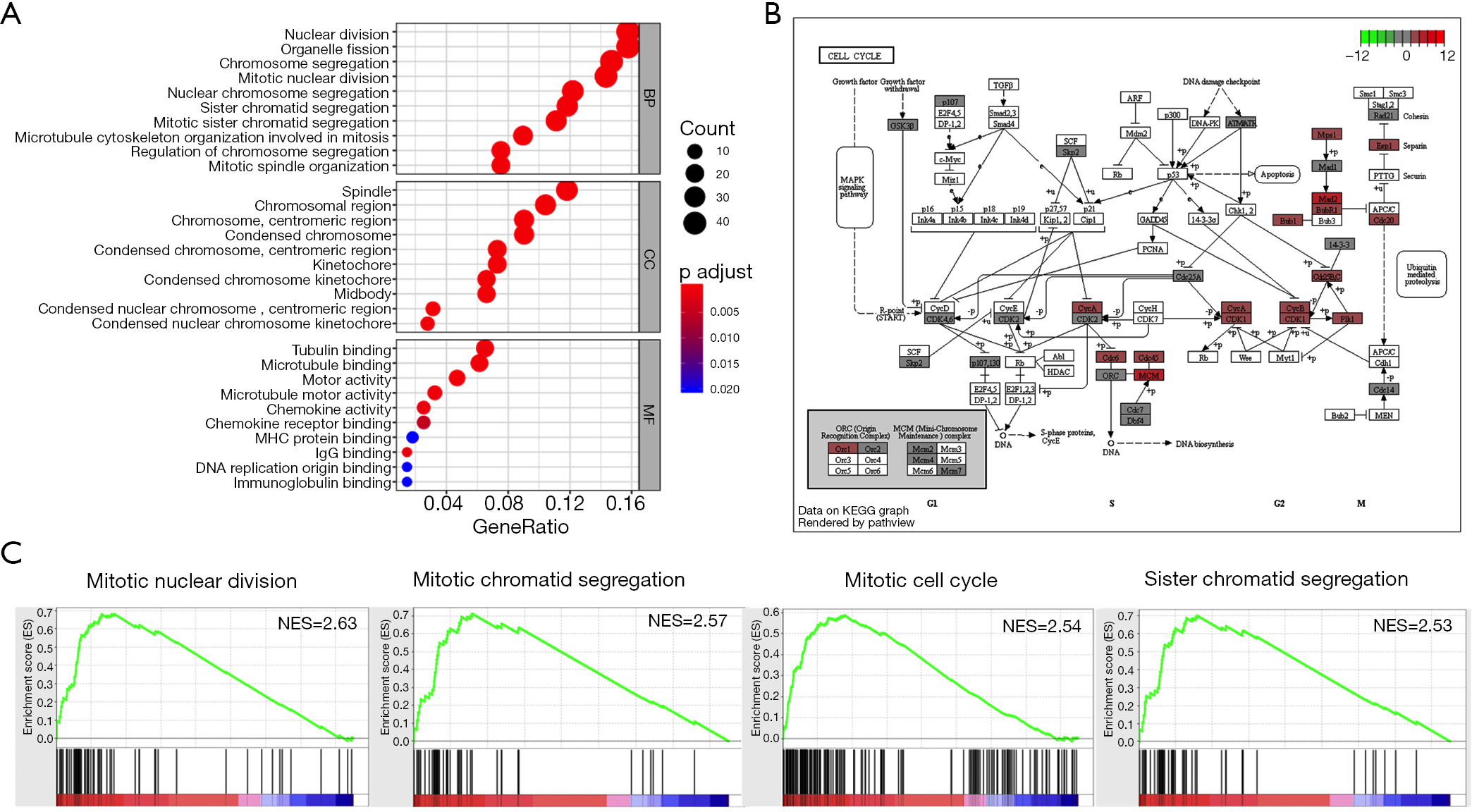 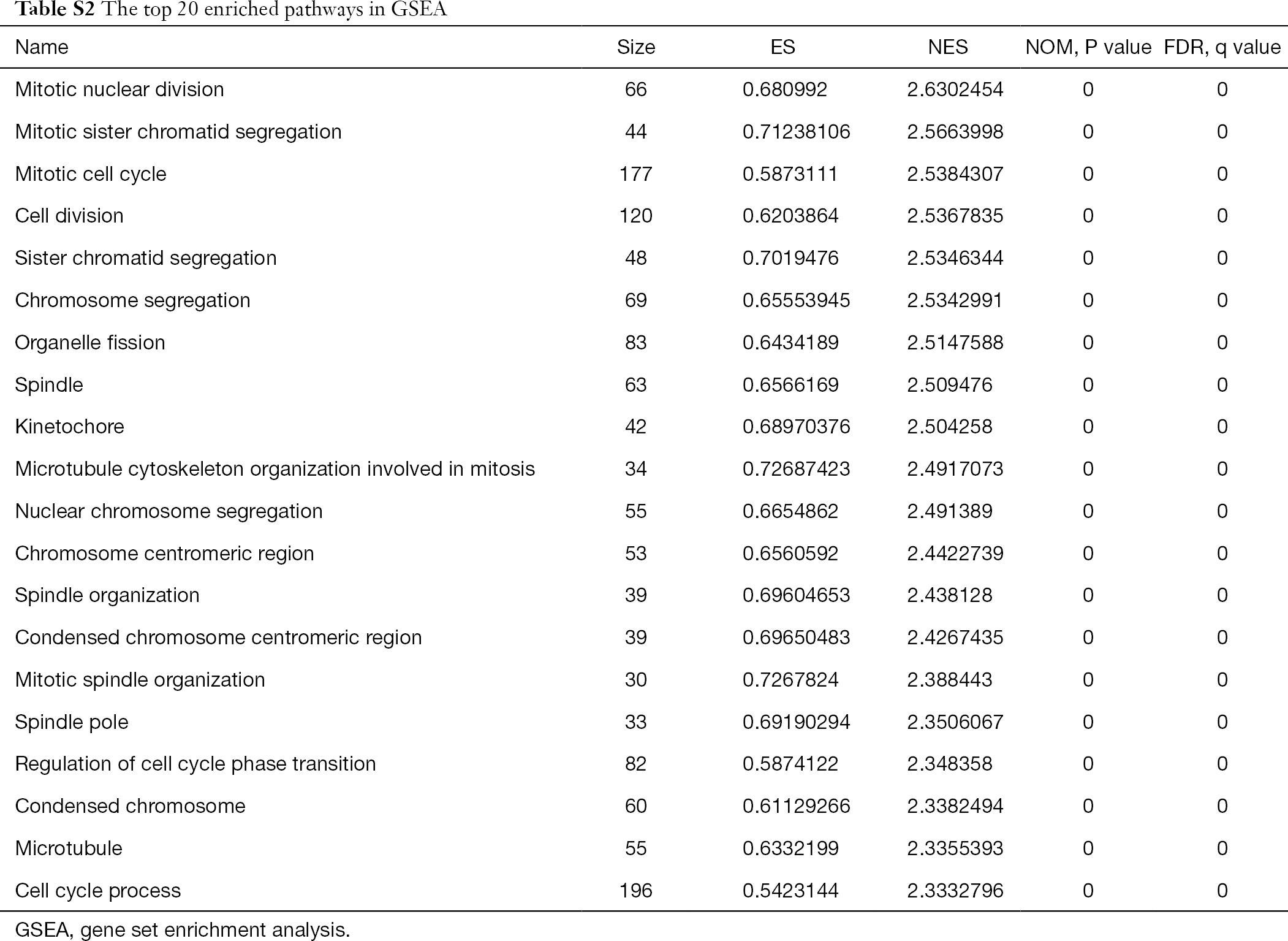 Only a small number of studies have reported the genomic and transcriptome characteristics of ATC. Kunstman et al. analyzed 22 cases of ATC as well as 4 established ATC cell lines using whole exome sequencing. They observed new ATC-related mTOR, NF1, NF2, MLH1, MLH3, MSH5, MSH6, ERBB2, EIF1AX, and USH2A mutations, and identified established thyroid cancer genes mutations such as BRAF, TP53, and RAS-family genes (23). Landa et al. analyzed the transcriptome profiles of 37 tumors (17 PDTCs and 20 ATCs). Their data supported a model of tumorigenesis by which PDTC and ATC arise from well-differentiated tumors through the accumulation of key additional genetic abnormalities such as mutations in TP53 and TERT promoter, and PI3K/AKT/mTOR pathway effectors (7). Yoo et al. recently performed RNA sequencing in 13 ATCs and 12 advanced DTCs. They identified a fourth molecular subtype of thyroid cancer, ATC-like despite BRAF-like, RAS-like, and NBNR. They also promoted the activation of the JAK-STAT signaling pathway as a potential target in RAS-positive ATC (9). However, their analyses were not focused on lncRNAs.

Our study, on the other hand, analyzed lncRNA expression profiles in ATC. Among the identified lncRNAs, MANCR was reported as an oncogene in ATC for the first time, through clinical validation and in vitro experiments. MANCR is a lncRNA that was originally identified in the transcriptome profiling of a series of breast cancer cell lines (24). With the exception of the spleen, MANCR expression is very low in most normal tissues (21). Tracy et al. reported that MANCR was overexpressed in triple-negative breast cancer cell lines and patient samples. Similar to our findings, a striking reduction was seen in cell growth, and cell death was induced upon MANCR knockdown in breast cancer cells (21).

A recent study also identified MANCR as an oncogene in PTC by genome-wide analyses using datasets from TCGA and the GEO (25). The authors performed loss-of-function assays and observed that downregulation of MANCR could significantly impair the proliferation, colony formation, cell-cycle progression, and cell invasion of PTC cells via epithelial mesenchymal transition. Unlike their results, we observed no MANCR overexpression in the majority of PTC cell lines or patient samples compared with NT. However, MANCR was upregulated in ATC and in locally advanced PTC (ETE and T4 stage). These results indicated that MANCR might serve as a promoter in the anaplastic change of PTC.

In fact, multiple studies support that PDTC/ATCs arise from pre-existing PTCs which undergo important genetic alterations (7,26,27). Mutations in TERT promoter, which actives TERT transcription, display a stepwise increase in frequency along the spectrum of disease progression, which is consistent with the constitutive activation of MAPK signaling (7). P53 and β-catenin mutations, which were found with increasing incidence in PDTC and ATC but not in PTC, may also serve as a direct molecular trigger of tumor dedifferentiation (27).

Although the mechanism of MANCR in carcinogenesis has not been fully elucidated, our GSEA results indicated that its role was primarily related to mitosis and cell cycle. These results are consistent with the in vitro experiments in a previous study. Tracy et al. (21) revealed that in breast cancer, interphase cells had the lowest expression of MANCR, while early mitotic cells had the highest expression. They also demonstrated defective cytokinesis in MANCR knockdown cells.

In conclusion, our observations indicate a unique expression profile of lncRNA in ATC. MANCR, one of the most significantly overexpressed lncRNAs, is upregulated in PDTC/ATC. MANCR is a tumor promoter in ATC; it increases cancer cell proliferation and invasion and decreases apoptosis. The role of MANCR in the carcinogenesis of ATC is possibly associated with mitosis and cell cycle. Since MANCR expression is minimal in most normal tissues, it may serve as a potential target in the treatment of ATC.

Reporting Checklist: The authors have completed the MDAR reporting checklist. Available at http://dx.doi.org/10.21037/atm-20-4530

Conflicts of Interest: All authors have completed the ICMJE uniform disclosure form (available at http://dx.doi.org/10.21037/atm-20-4530). The authors have no conflicts of interest to declare.

Ethical Statement: The authors are accountable for all aspects of the work in ensuring that questions related to the accuracy or integrity of any part of the work are appropriately investigated and resolved. The protocol for the research project has been approved by a suitably constituted Ethics Committee of Fudan University Shanghai Cancer Center (No. 050432-4-1805C), and it conforms to the provisions of the Helsinki Declaration as revised in 2013.