Osteosarcoma is the most common malignant bone tumor in the clinical setting, being the most common in children and teenagers. Osteosarcoma is characterized by local invasion and early lung metastasis with a poor prognosis in patients. The 5-year survival rate is less than 50% (1). Unfortunately, the pathogenesis of osteosarcoma is not yet entirely apparent, and the selection of the treatment choice is limited (2).

In recent years, an increasing number of studies have shown that the tumor microenvironment plays a vital role in the development of osteosarcoma, in which tumor-associated macrophages (TAMs) are widely involved in the growth, angiogenesis, metastasis and stem cell-like phenotype of osteosarcoma. A macrophage is a crucial part of the innate immune system with the functions of phagocytosis, antigen presentation, and secretion of various cytokines. It plays a vital role in the inflammation process, defense, repair, and metabolism. In a word, the macrophage is the critical factor for the body to support its stability. Macrophages come from monocytes (3). Bone marrow stem cells differentiate into monocytes, which, after being released into peripheral blood, are further differentiated into tissue-specific macrophages. Then they are induced to polarize into two distinct types, classically activated macrophages (M1 type) and alternatively activated macrophages (M2 type), under the influence of local microenvironment. M1 macrophages are involved in Th1-type immune response and promote the inflammation response (4). However, M2 macrophages play a negative role in inflammation response by Th2-type immune response, which may function in the immune escape of tumor cells (5). At present, highly infiltrated M2-type TAMs are discovered in various malignant tumors, including liver cancer, lung cancer, stomach cancer, among many others, which indicates a poor prognosis (6,7).

The study of the regulation mechanism on macrophage polarization can supply innovative ideas for the treatment of related diseases in which macrophages take part. However, at present, the cell typing of TAM in osteosarcoma is not explicit, and there are still differences in its effect on the growth, angiogenesis, and metastasis of osteosarcoma. Therefore, we consider whether the Notch signaling pathway in macrophages participates in the regulation of TAM polarization, which further participates in the development of osteosarcoma. It may provide a way to interfere with macrophage polarization to inhibit tumors. We present the following article in accordance with the ARRIVE reporting checklist (available at http://dx.doi.org/10.21037/atm-20-3881).

Experiments were performed under a project license (No.: IACUC-4th Hos Hebmu-20170117) granted by the institutional ethnics committee of the Fourth Hospital of Hebei Medical University, China, in compliance with this institutional guideline for the care and use of animals.

Induction and identification of the model of mouse TAM cells

To obtain primary mouse bone marrow cells: Mice were executed by cervical vertebra luxation and sterilized by 75% ethanol immersion. Then their femurs were removed in clean bench aseptically. The bone marrow cells were washed out by phosphate buffer saline (PBS) with a 5 mL syringe. The cell suspension was placed in a centrifuge tube and centrifuged at 1,300 rpm for 3 minutes to collect cells. The obtained cells were resuspended by Red Blood Cell Lysis Solution and split at room temperature for 5 minutes. The rest bone marrow cells were resuspended in a 100 mL/L fetal bovine serum (FBS)-based Minimum Essential Medium-α (αMEM) medium prepared in advance and inoculated in a 10 cm dish. The bone marrow cells were cultured for about 16 hours to remove the adherent cells. The non-adherent cells were collected by centrifugation and resuspended with 10% FBS-based αMEM medium. They were transferred into the dishes or culture plates according to the pre-design. Add the inducer granulocyte-macrophage colony stimulating factor (GM-CSF) at a concentration of 40 ng/mL to stimulate the bone marrow cells to differentiate into monocytes, during which the cell morphology can be observed under a light microscope. Then the induced cells were cultured with osteosarcoma S180 cells for 48 hours to obtain TAM cells.

The genotyping of transgenic mice

Establishment of a tumor-bearing mouse model

Five pairs of 6-week-old mice with Lyz2Cre Notch1 f/f and Lyz2Cre Notch1 f/+ genotype from the same source were selected. Osteosarcoma S180 cells suspension, which was in the logarithmic period, was prepared. The above mice were injected with osteosarcoma S180 cells suspension on the right side of their back. After the treatment, the mice were put back into the cage and fed typically. The life status of tumor-bearing mice was observed every day. After 21 days, the tumor was taken out and weighed. And the effect of Notch1 knockout on tumor growth was compared.

Tumor tissue from five mice separately was removed and put it in 4% paraformaldehyde overnight. The next day, the tumor tissue was further cut into small pieces and fixed for 12 hours. Then they were dehydrated in a 25% sucrose solution overnight. After dehydration, they were immersed in a Freeze Embedding Agent (OCT) and quickly placed in liquid nitrogen. The sections were made by freezing microtome and dried on the cationic slide at room temperature. Then they were put into the antigen repair solution, repaired at 80 °C for 15 minutes, cooled naturally, and sealed for 4 hours. Next, the sections were incubated with the first antibody at 4 °C overnight, the second antibody at room temperature for 2 hours, the third antibody at room temperature for 40 minutes, and Hoechst Stain solution for 10 minutes in order. After being sealed with 75% glycerin, the cell morphology tumor was observed by fluorescence microscopy (Olympus BX-51).

Proteins were extracted from the tissue or cells of five mice using Radio Immunoprecipitation Assay (RIPA) lysis buffer (Thermo Fisher Scientific, USA) to collect total protein using five mice separately which was separated on a 12.5% SDS-PAGE gel and transferred to a polyvinylidene fluoride (PVDF) membrane (Sigma-Aldrich, USA) in turn. The PVDF membrane was blocked by 1% BSA. Then it was incubated with specific primary antibody made by Bioss Antibodies company (Bioss, China) and then with corresponding secondary antibody (Abcam, UK). Finally, the PVDF membrane was stained using NBT/BCIP Reagent Kit (Thermo Fisher Scientific, USA).

Osteosarcoma S180 cells of 5×106 were inoculated subcutaneously in the lower back of the control and experimental mice with Lyz2CRE Notch1 flox/+ or Lyz2CRE Notch1 flox/flox genotype respectively. These mice had consistent growth conditions and weight. After two weeks, the length and width of the tumor were measured with a vernier caliper. Next, the weight was measured with an electronic scale. The tumor volume was calculated according to the formula “Volume = L × S2 × 0.51”. The tumor of Notch1 knockout mice was significantly more extensive than that of the control mice (Figure 2A). The tumor weight of Notch1 knockout mice was about 2.95 times as weight as that of the control mice (9.91 vs. 3.36 g), and the tumor volume was about 3.16 times as large as that of the control mice (22.48 vs. 7.10 cm3) (Figure 2B). 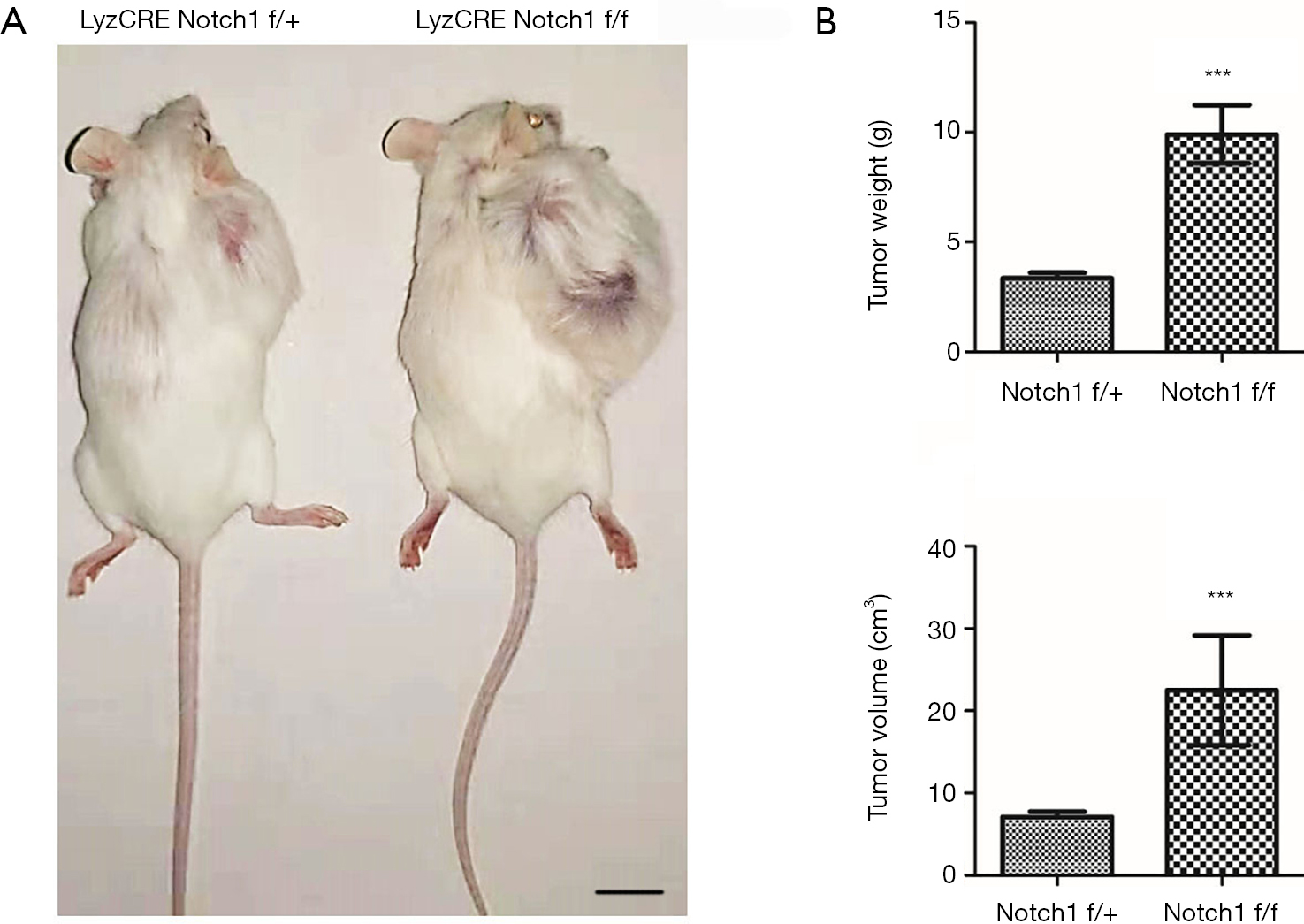 The tumor tissue was fixed by paraformaldehyde (POM), dehydrated by sucrose, frozen, and embedded in OCT compound and stained by immunofluorescence by turn. iNOS and CD206 are used as cell markers of M1-type and M2-type TAMs, respectively. NPC2, fused with GFP, was used as biomarker of osteosarcoma. The infiltrating M1-type and M2-type TAMs in tumor tissue were detected by a fluorescence microscope, and several fields were randomly selected. The results showed that the M1-type TAMs with an expression of iNOS in the osteosarcoma tissue of Notch1 f/f mice were significantly less than those in control mice (Figure 3A,B). The M2-type TAMs with an expression of CD206 was significantly more than those in control mice (Figure 3C,D). 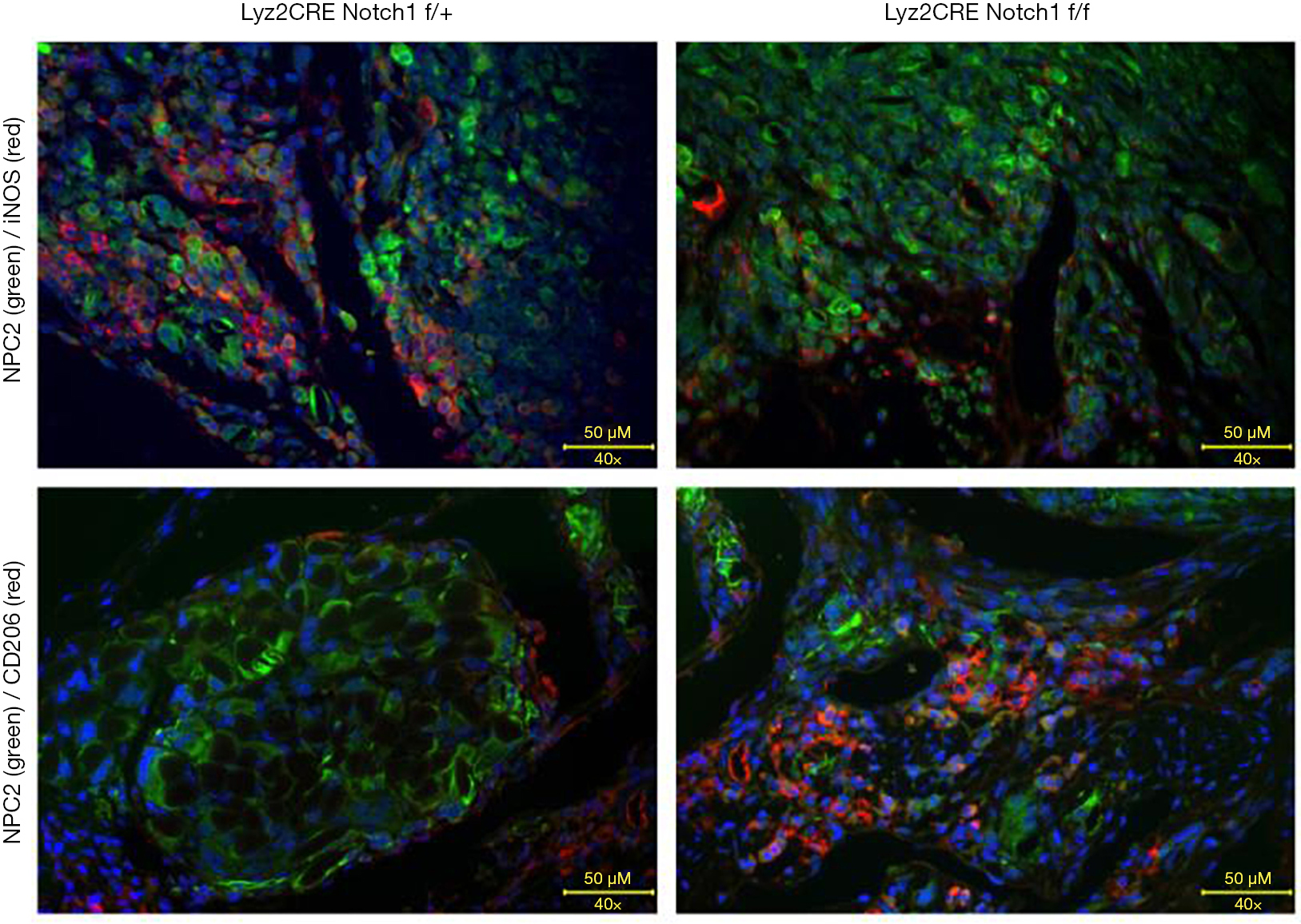 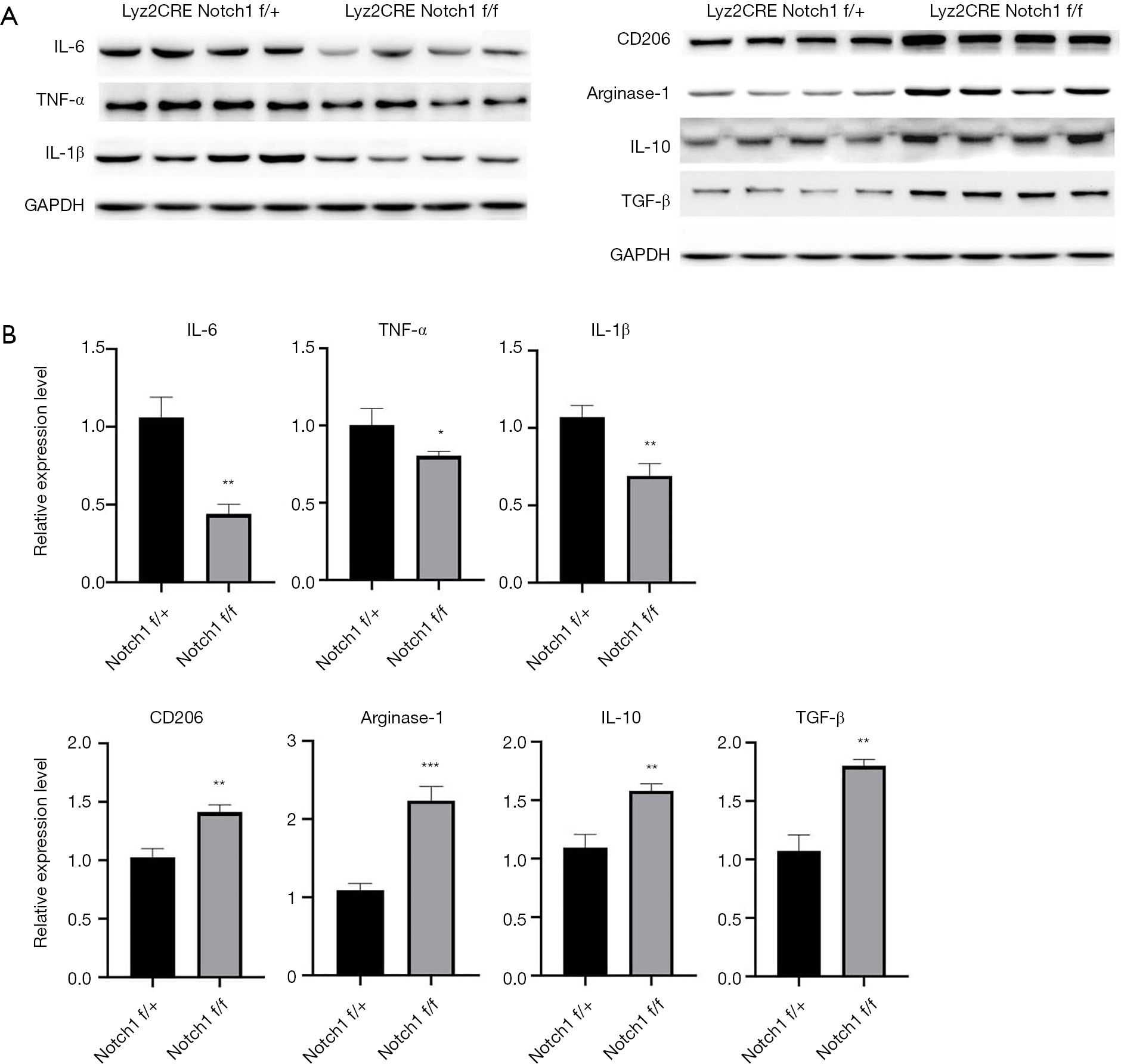 In recent years, many studies have found that TAMs are closely related to tumor malignancy and poor prognosis, which play a key role in promoting tumor invasion and metastasis (11). In the process of tumor development, TAMs tend to polarize to M2-type TAMs, which are characterized by high-level expression of CD206, CD163, IL-10, low-level expression of IL-2, and secretion of VEGF, TGF-β, and CCL22 (12). As a result, the Th2-type immune response is induced, which causes immune escape. In this study, monocyte macrophages were demonstrated to be polarized to the M2-type TAMs by being cocultured with osteosarcoma S180 cells. M2-type TAMs secreted less Th1-type cytokines and Notch1 protein, but more Th2-type cytokines.

Four Notch receptors (Notch1-4) and five ligands [Delta-like-1, delta-like-3, delta-like-4 (DLL1, 3, 4) and Jagged1, jagged2 (JAG1, 2)] exist in mammals. A Notch receptor is a single transmembrane molecule composed of heterodimers, and its ligand is also a transmembrane molecule (13). Notch signaling pathway functions between cells. Many studies have shown that an abnormal Notch signaling pathway is closely related to macrophage polarization, which plays a significant role in the growth, proliferation, and apoptosis of several tumors (14,15).

In this study, mice with Lyz2Cre Notch1 f/f and Lyz2Cre Notch1 f/+ genotype were obtained when the Notch signaling pathway was blocked. Our results showed that blocking the Notch signal pathway could promote the polarization of the TAM to the M2 phenotype. Further, increased M2-type TAMs decreases the secretion of Th1-type cytokines, increases the secretion of Th2 cytokines. In turn, these results increase the Th2-type inflammatory reaction and result in growth and immune escape of tumor cells. As expected, the tumor growth rate of the Notch1 knockout mice was significantly faster than that of the control mice, and the tumor volume was also significantly more extensive.

In conclusion, in the development of tumors, blocking the Notch signaling path promotes the polarization of TAM to the M2 genotype and after promoted the development and metastasis of the tumor.

Reporting Checklist: The authors have completed the ARRIVE reporting checklist. Available at http://dx.doi.org/10.21037/atm-20-3881

Conflicts of Interest: All authors have completed the ICMJE uniform disclosure form (available at http://dx.doi.org/10.21037/atm-20-3881). The authors have no conflicts of interest to declare.

Ethical Statement: The authors are accountable for all aspects of the work in ensuring that questions related to the accuracy or integrity of any part of the work are appropriately investigated and resolved. Experiments were performed under a project license (No.: IACUC-4th Hos Hebmu-20170117) granted by the institutional ethnics committee of the Fourth Hospital of Hebei Medical University, China, in compliance with this institutional guideline for the care and use of animals.