Obesity has a negative impact on the body in a multitude of ways, including a six-fold increase in risk for knee osteoarthritis (1). As such, many patients with increased body mass indices (BMI) will present to providers with bilateral disease, with some necessitating total knee arthroplasties (TKA) (2). To avoid the morbidity of multiple operations, same-day bilateral total knee arthroplasty (sd-BTKA) may be an option for these patients, as some find appeal in a single surgery and hospitalization (3,4). Moreover, physicians may acquiesce to the procedure as investigations report decreased cumulative hospital stays and rehabilitation time (5-10). Despite the purported benefits of this procedure, studies have revealed increased risk for negative outcomes with the bilateral operation (9-13). As a consequence of the conflicting body of literature, the utility of sd-BTKA continues to generate debate amongst arthroplasty surgeons (14-16).

Over time, the debate regarding sd-BTKA intensified to a level that warranted consensus recommendations in 2013 (4). Among several proposals, the presence of certain comorbidities, such as morbid obesity, were felt to warrant exclusion of individuals from consideration for the operation. This notion is predicated off studies identifying higher BMI patients as having an increased risk for complications when undergoing unilateral TKA (17-23), though several studies have demonstrated a lack of association between poor outcomes and high BMI (24-28). Ultimately, whether high BMI patients should be subjected to the cumulative risk of two unilateral TKAs or the single operation of sd-BTKA remains inconclusive, as no studies have investigated the prospect.

To date, there is a shortage of studies that have quantified the role of high BMI in patients undergoing sd-BTKA. Specifically, no study has evaluated the effect elevated BMI has on the outcomes of this procedure when compared to non-obese patients. Therefore, this study will compare (I) incidence, (II) demographics, and (III) outcomes of non-obese, obese, and morbidly obese sd-TKA patients in the United States from 2009 to 2016. We present the following article in accordance with the STROBE reporting checklist (available at http://dx.doi.org/10.21037/atm-20-806).

The National Inpatient Sample (NIS) database was queried for all individuals who underwent sd-BTKA from 2009 to 2016. The NIS is a large, publicly available database gathered by the Agency for Healthcare Research and Quality (AHRQ) for the Healthcare Cost and Utilization Project (HCUP), which was created with the goal of improving health care delivery. The unweighted NIS database contains seven million hospital stays each year. When weighted, it represents approximately 35 million hospitalizations nationally (29).

Patient variables included mean age, mean length of stay (LOS), sex, race, primary payer, age-adjusted Charlson Comorbidity Index (ACCI) score, and discharge disposition. Length of stay was defined as the stay from admission until discharge. Race was categorized into Caucasian, African American, Hispanic, Asian, Native American, and other. Primary payer included Medicare, Medicaid, private insurance, self-pay, no charge, and others. The ACCI is a prognostic tool employed to estimate 10-year mortality based on 19 comorbid conditions and is categorized in accordance with the number of present comorbidities, namely 0, 1, 2, or 3+ (30). Discharge disposition was categorized into routine, short-term hospital, skilled nursing facility, home with home health care, against medical advice, and deceased. 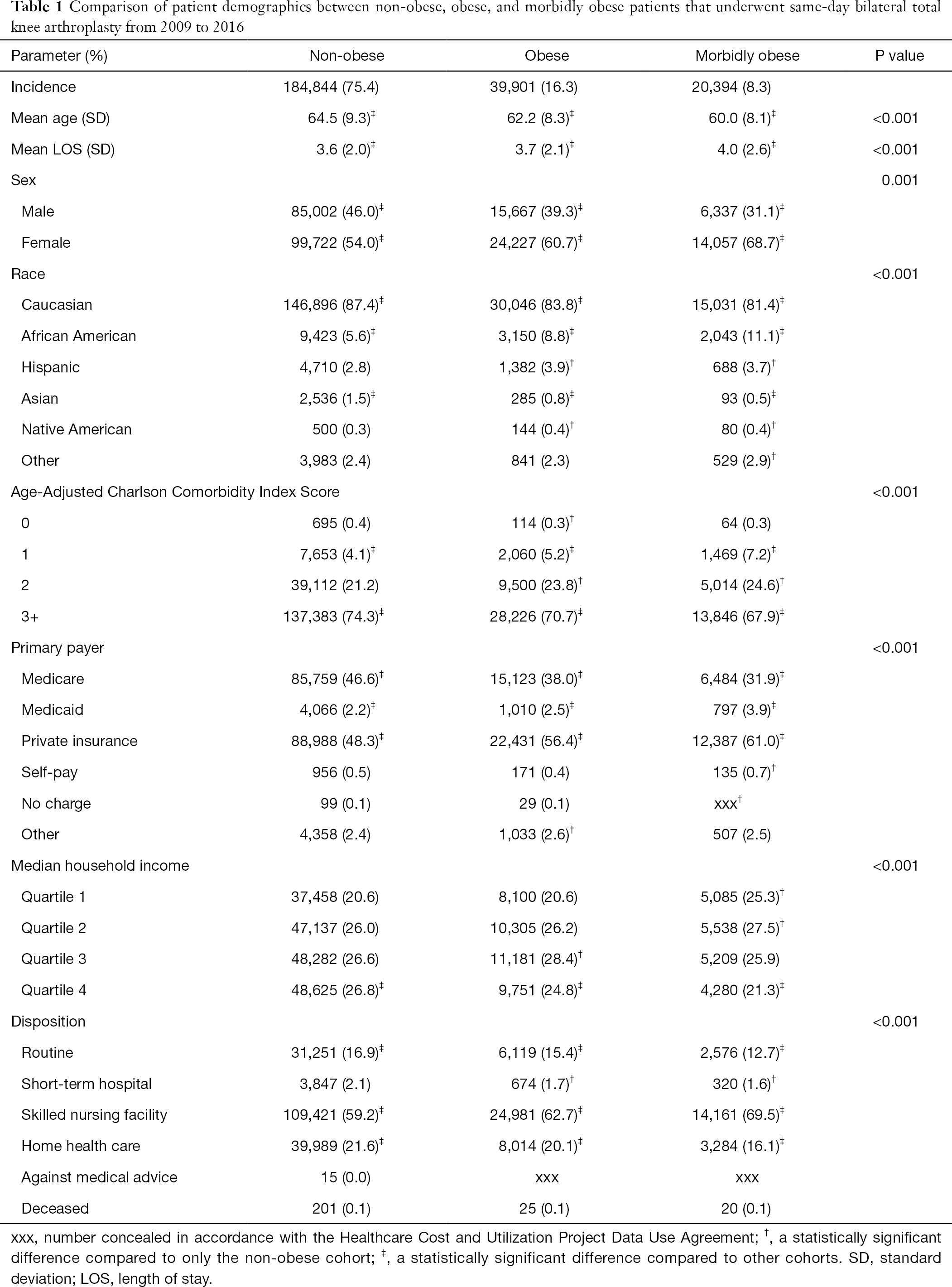 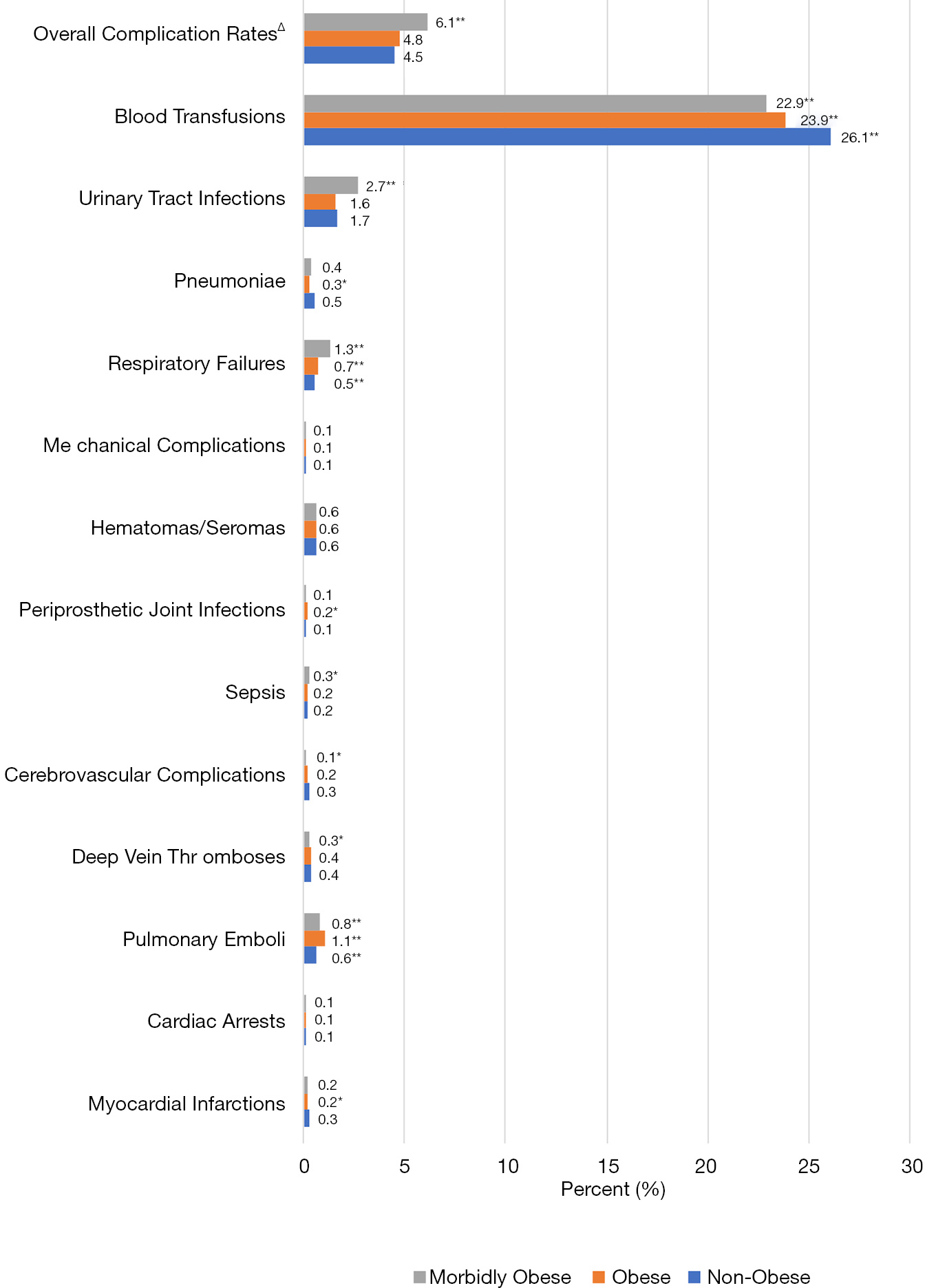 Figure 1 The proportion of complications experienced by non-obese, obese, and morbidly obese individuals undergoing same-day bilateral total knee arthroplasty. ∆, blood transfusions were not included in the overall complication rate; *, a statistically significant difference compared to only the non-obese cohort; **, a statistically significant difference compared to other cohorts. 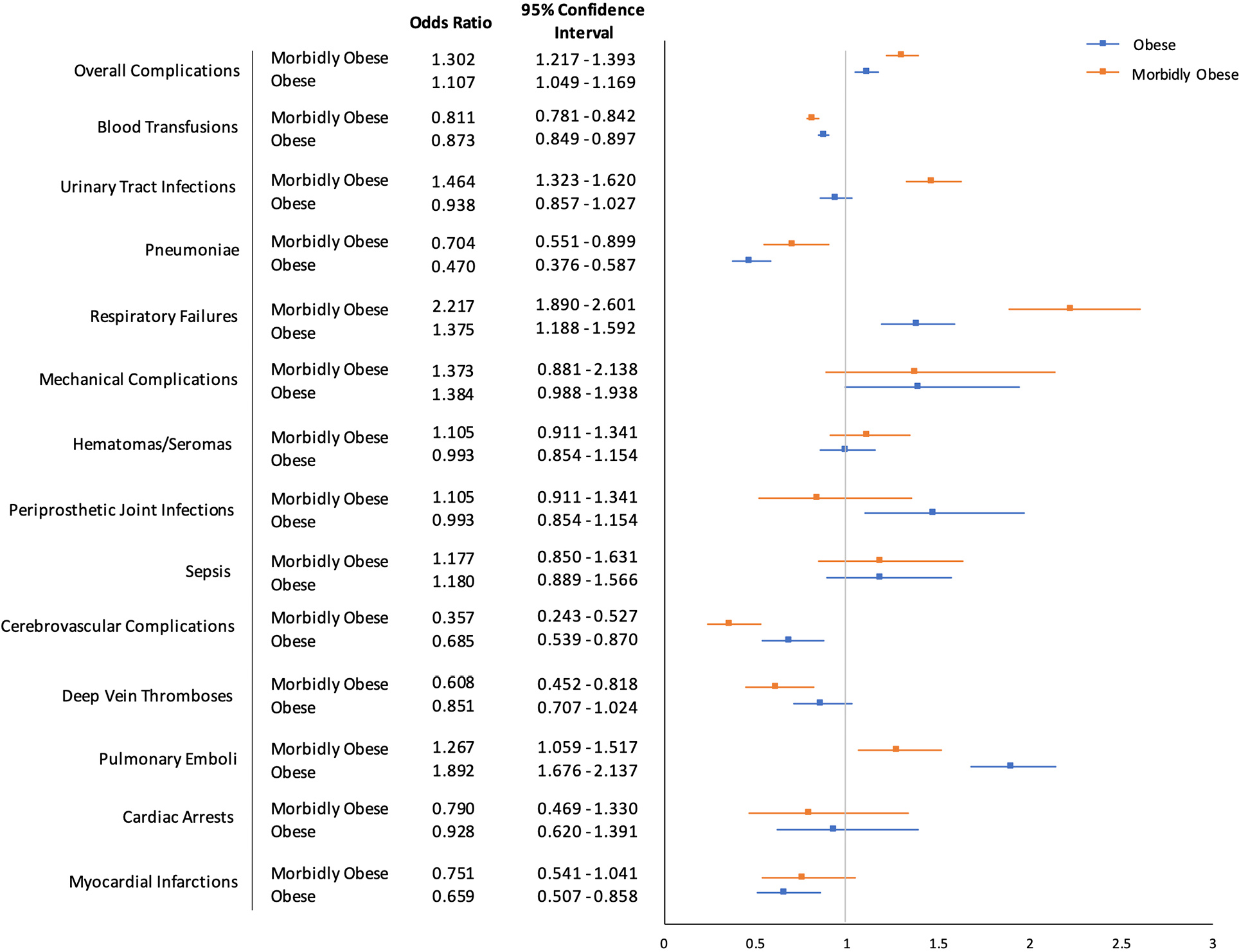 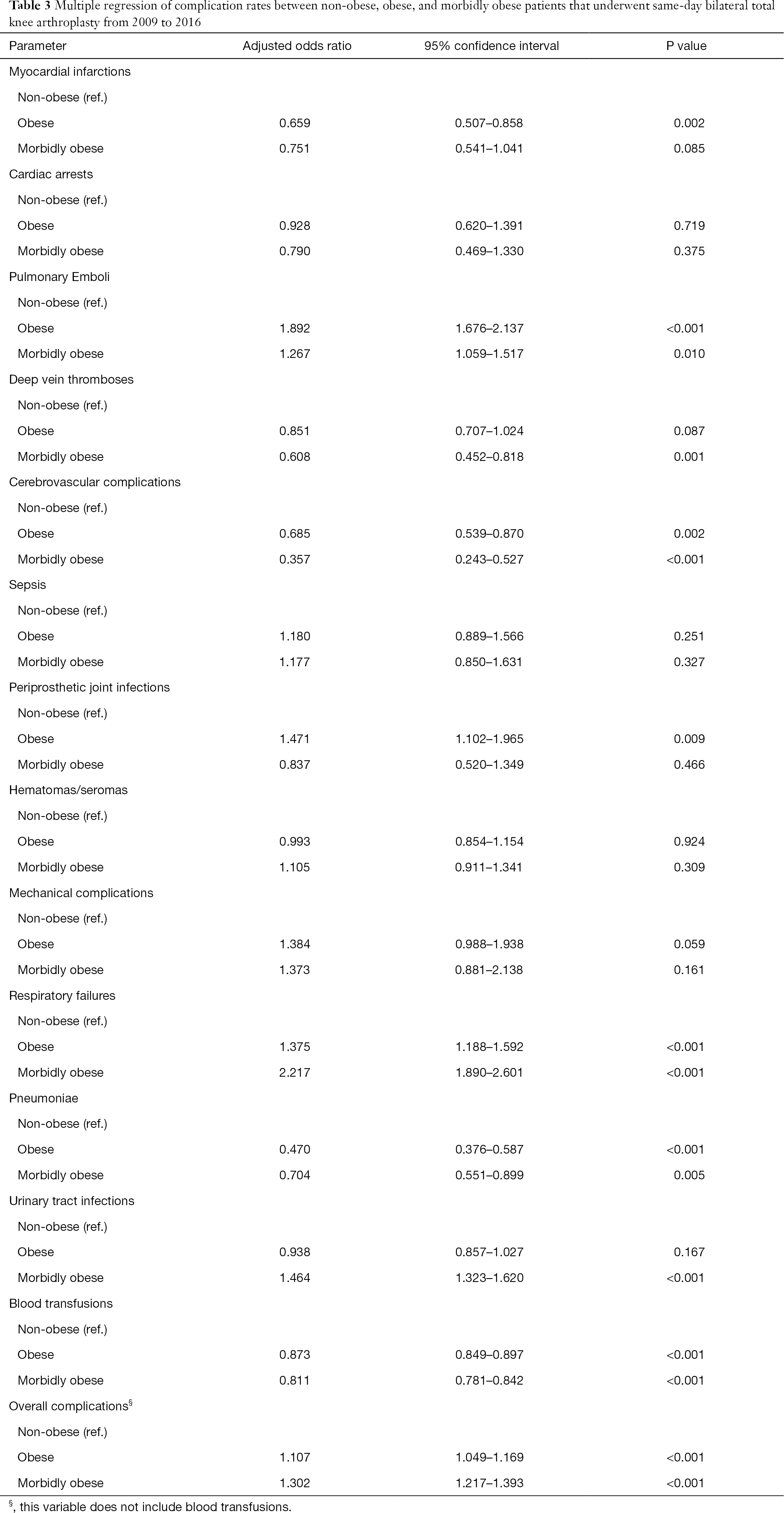 Morbidity and mortality are the largest concerns surrounding sd-BTKA, and conflicting studies have generated debate regarding the appropriateness of this procedure. The present study utilized the NIS database to examine and identify outcomes of sd-BTKA patients with varying BMI levels, in an effort to characterize the degree of risk higher BMI patients sustain when undergoing this procedure, as no studies have done so previously. Predictably, LOS, hospital costs and charges, and overall inpatient complication rates increased as BMI increased. Specifically, obese individuals demonstrated increased risk for PE, PJI, and respiratory failures, while morbidly obese individuals demonstrated increased risk for PE, sepsis, respiratory failures, and UTIs. Similar to unilateral TKA, the presence of obesity or morbid obesity appears to confer a higher level of overall risk for complications in patients undergoing sd-BTKA.

This study does possess limitations. As the present study was performed retrospectively, the authors were confined to the data presented within the NIS database. Second, the transition period from ICD-9 to ICD-10 medical coding systems occurred during our study. The new coding system may have caused providers to miscode sd-BTKAs, producing inconsistencies in our obtained incidence numbers. However, any data entry errors that occurred were likely diminished due to the considerable sizes of our analyzed cohorts. Moreover, querying the NIS in the method we chose did not delineate between simultaneous or sequential BTKA, which is why we opted for the term ‘same-day’. Nonetheless, both procedures are performed under the same anesthetic and may incur similar perioperative risk, as several studies have compared both approaches to staged BTKA or unilateral TKA (31-34). Third, the NIS database only captures the inpatient stay. Therefore, we were unable to measure readmissions and post-discharge complications. Although, this study provides a thorough analysis regarding the morbidity and mortality of patients with varying BMI statuses throughout the inpatient stay, which is arguably when the patient is subjected to the highest amount of risk. Although limitations exist in this study, the breadth of our analysis is comprehensive and provides valuable information pertaining to the role of BMI in the highly debated procedure of sd-BTKA.

In the present study, a significant difference was observed between BMI and hospital LOS. As BMI increased, the LOS also increased, with non-obese individuals staying an average of 3.6 days and morbidly obese individuals staying 4.0 days. An increased LOS can have large implications on the postoperative outcomes TKA patients. Otero et al. (35) examined the association between LOS and complications in TKA patients from 2011 to 2013, finding patients staying four or more days experienced complication rates that were three times higher than those staying 3 days (3.41% vs. 11.15%). Moreover, the cohort staying 4 days or longer had a higher average American Society of Anesthesiologists (ASA) scores, were older, and more likely to be female. Although LOS in itself was likely not the sole reason patients experienced higher complication rates, it appears to be an important factor that should be reduced, though this may not be readily possible when performing sd-BTKA. Thus, selecting patients with favorable characteristics, namely lower ASA or younger age, may be the next best option to optimize postoperative courses. Davidson et al. (36) did just that and assessed outcomes in sd-BTKA patients who were selected via their institutionally developed appropriateness of care criteria (AOCC) versus those who were not. Patients were considered ‘ideal’ candidates by the AOCC if they were younger than 70, did not have cardiac disease, diabetes, or lower extremity deformities, and were non-obese. With the AOCC stratification tool, the ideal cohort was younger (61 vs. 65 years), had fewer comorbidities, required a shorter LOS (3.6 vs. 3.9 days), and were discharged home more frequently (26% vs. 13%). While this study used obesity as an exclusion criterion, providers may observe good outcomes in higher BMI patients if they appropriately satisfy other criteria. Obese and morbidly obese individuals who underwent sd-BTKA in the present study appeared to be ‘healthier’ despite the presence of obesity, as evidenced by the reduced average ACCI and age. Performing sd-BTKA on high BMI individuals is possible, and risk stratifying patients in a manner similar to the AOCC may increase the likelihood of achieving favorable outcomes.

Both obese and morbidly obese cohorts demonstrated increased odds for experiencing complications, but morbidly obese patients demonstrated a statistically significant increase in overall complications. Unfortunately, only a select few have examined the role of obesity in sd-BTKA. In a retrospective study performed by Taylor et al. (37), the authors compared 1-year morbidity and mortality rates in obese patients undergoing either sd-BTKA (n=151) or unilateral TKA (n=148), concluding both major (MI, PE, cerebrovascular accident, etc.) and minor (UTI, superficial infection, ileus, etc.) complication rates in sd-BTKA to be similar to unilateral TKA. Thus, obese individuals undergoing the procedure of sd-BTKA may not be at increased risk compared to their unilateral TKA counterparts. Madsen et al. (3) investigated morbidly obese patients receiving sd-BTKA by performing a ten-year analysis of outcomes in non-obese (n=79) and morbidly obese patients (n=42). The authors found similar complication rates between the two cohorts, with both experiencing four major complication events. The obese cohort experienced one PE, one extensor mechanism disruption, and two DVTs, while the morbidly obese cohort experienced one MI, one extensor mechanism disruption, and two DVTs. Although the authors provided a long-term analysis of sd-BTKA patients, the number of patients examined in each cohort was insufficient to make appropriate conclusions regarding the procedure. Predicated off the limited literature assessing BMI status and sd-BTKA, the benefit of this procedure remains inconclusive, though it may be appropriate for higher BMI individuals with desirable comorbidity profiles. Moreover, opting to perform sd-BTKA may benefit select higher BMI patients considering staged BTKA. In a study performed by Grace et al. (38), the authors examined the risk for recurrent complications (MI and other cardiac-related complications, ischemic stroke, respiratory complications, digestive complications, urinary complications, and hematomas) in staged BTKA patients after they experienced a complication following their initial unilateral TKA. The authors noted significantly increased odds ratios (OR) for all analyzed complications, with MIs [OR: 56.63; 95% confidence interval (CI): 18.04–155.44; P<0.001] and stroke (OR: 41.38; 95% CI: 1.98–275.82; P=0.03) presenting the greatest risk. As higher BMI individuals already experience increased probabilities for complications with unilateral TKA compared to non-obese patients, providers may want to consider the prospect of sd-BTKA to mitigate the cumulative risk staged BTKA bestows upon these patients.

The United States continues to experience an increase in obesity, and arthroplasty surgeons will be faced with the decision of operating on these patients. The present study determined that high BMI patients undergo meticulous selection for sd-BTKA, as evidenced by decreasing age and ACCI. However, these patients are still experiencing longer LOS, heightened chances for discharge to nursing facilities, and increased complication rates compared to their non-obese counterparts. Despite these differences, obese and morbidly patients may be optimized to a level where they experience similar risk to those with comparable BMIs undergoing unilateral TKA. More research is necessary to understand the risk patients accrue when undergoing sd-BTKA compared to those undergoing staged BTKA.

Reporting Checklist: The authors have completed the STROBE reporting checklist. Available at http://dx.doi.org/10.21037/atm-20-806