There is growing evidence that some fruits are good for your health. As one of the bioactive molecules found in lemon, the flavonoid eriocitrin (eriodictyol 7-rutinoside) has been shown to have antioxidant properties (4). Previous reports have indicated that eriocitrin can suppress exercise-induced oxidative damage in rat liver (4) and ameliorates diet-induced hepatic steatosis (5). More impressively, eriocitrin suppressed the proliferation in human hepatocellular carcinoma cells (6). After CI/R injury, increased oxidative stress and inflammation play central roles in triggering cellular and subsequent tissue damage (7). Therefore, we speculated that eriocitrin could alleviate oxidative injury nuclear factor erythroid 2-related factor (Nrf2), an inducible transcription factor, has been shown to be associated with endogenous antioxidant systems (8). As one of the most important mechanisms for protecting the brain from oxidative stress, it has served as a target for stroke treatment (9). Pilose antler peptide (10), uric acid (11), and protodioscin (12) have been reported to exert protective effects on CI/R injury through the Nrf2 pathway. Therefore, we predicted that eriocitrin could protect the brain from CI/R injury via the Nrf2 pathway.

In this study, eriocitrin was used to treat rats with CI/R injury. Eriocitrin was shown to alleviate oxidative injury and inflammatory response in rats with CI/R through the Nrf2/heme-oxygenase-1 (HO-1)/quinine oxidoreductase 1 (NQO1)/nuclear factor-κB (NF-κB) signaling pathway.

We present the following article in accordance with the ARRIVE reporting checklist (available at http://dx.doi.org/10.21037/atm-20-4258).

Seventy male Sprague-Dawley rats (weight: 200–220 g) were purchased from Junke Bioengineering co. LTD (Nanjing, China). The animals were kept in an air-conditioned room at 23±1 °C with 45–55% humidity, under a 12/12 h light/dark cycle. The rats were kept for 7 days and given free access to water and a standard laboratory feed before the experiments. All experiments involving animals were performed according to the National Institutes of Health (NIH) guidelines for the Care and Use of Animals. All experiments were approved by the ethics committee of West China Hospital (No. 2018-29).

The MCAO model was performed as previously described, with slight modification (13). In brief, the rats were anesthetized with 350 mg/kg chloral hydrate. Then, the internal carotid artery (ICA), right common carotid artery, and external carotid artery (ECA) of each rat were carefully dissected. A 4-0 nylon filament with a rounded tip was inserted into the ICA through the ECA stump and pushed gently towards the middle cerebral artery (MCA) to achieve MCAO. After MCAO for 2 h, the filament was gently removed to initiate reperfusion and the skin was sutured. The rats in control group underwent the same surgical procedure except for the occlusion/reperfusion. The rectal temperature of each rat was maintained at 37±0.5 °C with a heating pad from the start of surgery.

The Seventy rats were randomly divided into 5 groups: the control group, the model group (I/R), and 3 dose groups (the I/R + eriocitrin 8 mg/kg group, the 16 mg/kg group, and the 32 mg/kg group). Different doses of eriocitrin diluted with 0.5% carboxymethyl cellulose sodium were orally administrated to the rats once daily for 7 days before the MCAO. The control group and cerebral I/R group rats were fed the same volume of carboxymethyl cellulose sodium. After 1 h of the final drug treatment, the MCAO surgery was started.

After 24 h of reperfusion, the rats were sacrificed. Their brains were promptly removed and maintained at −20 °C for 2 min. Then, the brains were cut into 2 mm coronal sections, which were stained with 2% 2, 3, 5-TTC for 30 min at 37 °C, and then fixed with 4% paraformaldehyde overnight. The sections were observed using a high-resolution digital camera. Image processing software (Image-Pro Plus, Version 6.0; MEDIA CYBERNETICS, USA) was used to quantify the rate of cerebral infarction.

The brain tissues of the rats were harvested, fixed in 4% paraformaldehyde for 20 h, and then embedded with paraffin. Following that, the brain tissues were cut into 4 µm-thick sections. Subsequently, H&E staining was performed according to the manufacturer’s instructions. Finally, the results were observed using an optical microscope (OLYMPUS, Japan).

After 24 h of reperfusion, the rats were anesthetized and transcardially perfused with cold saline followed by 10% buffered formalin phosphate. Paraffinized brain sections were used to investigate the histological injury by TUNEL. The TUNEL experiment was carried out as previously described (14).

The primary antibodies, including anti-caspase-3, anti-caspase-9, anti-Nrf2, anti-NQO1, anti-HO-1, anti-NF-κB p65, and anti-actin, were purchased from Abcam (Cambridge, UK). After 24 h of reperfusion, the rat brain samples were homogenized, washed with phosphate buffered saline (PBS), and then lysed with radio immunoprecipitation assay (RIPA) lysis buffer. The total protein content was determined using a BCA kit (Solarbio, Beijing, China). After centrifugation at 12,000 rpm for 10 min, the supernatants were harvested for the measurement of protein concentration. The protein was isolated by sodium dodecyl sulfate-polyacrylamide gel electrophoresis (SDS-PAGE) (Solarbio, Beijing, China) and then transferred to polyvinylidene difluoride (PVDF) membranes (Solarbio, Beijing, China). The membranes were blocked with 5% nonfat dry milk and incubated overnight at 4 °C with anti-caspase-3, anti-caspase-9, anti-Nrf2, anti-NQO1, anti-HO-1, anti-NF-κB p65, and anti-actin. Following that, the membranes were washed with tris-buffered saline and Tween 20 (TBST) buffer. The secondary antibody was added to the membranes. The blots were detected with an ECL detection kit (Solarbio, Beijing, China). Actin was served as a loading control.

Determining the levels of SOD, MDA, and LDH in brain tissues

After 24 h of reperfusion, experimental rats were sacrificed and decapitated. The brain tissues were added to cold normal saline and homogenized with a high-speed homogenizer at 12,000 rpm for 10 min at 4 °C. The supernatant was collected and stored at −80 °C for the subsequent experiments. The levels of SOD, MDA, and LDH were determined with test kits (Solarbio, Beijing, China). All procedures were performed according to the manufacturer’s instructions.

Measurements of cytokines in serum and brain tissues

After 24 h of reperfusion, experimental rats were sacrificed and decapitated. Their blood was collected and centrifuged at 3,000 rpm for 10 min. Then, the serum samples were placed for storage at −80 °C. The serum samples and brain tissue supernatant stored previously were used for the detection of IL-6, TNF-α, and IL-10 with ELISA kits (Biocompare, USA). All of the specific procedures were based on the kit instructions.

All the data were processed by GraphPad Prism software (GraphPad Software Inc., San Diego, CA, USA), and the results were expressed as the mean ± standard deviation (SD). Difference between groups were analyzed by one-way analysis of variance (ANOVA). A significant difference was considered when P value ≤0.05.

Effects of eriocitrin on cerebral injury in rats with CI/R 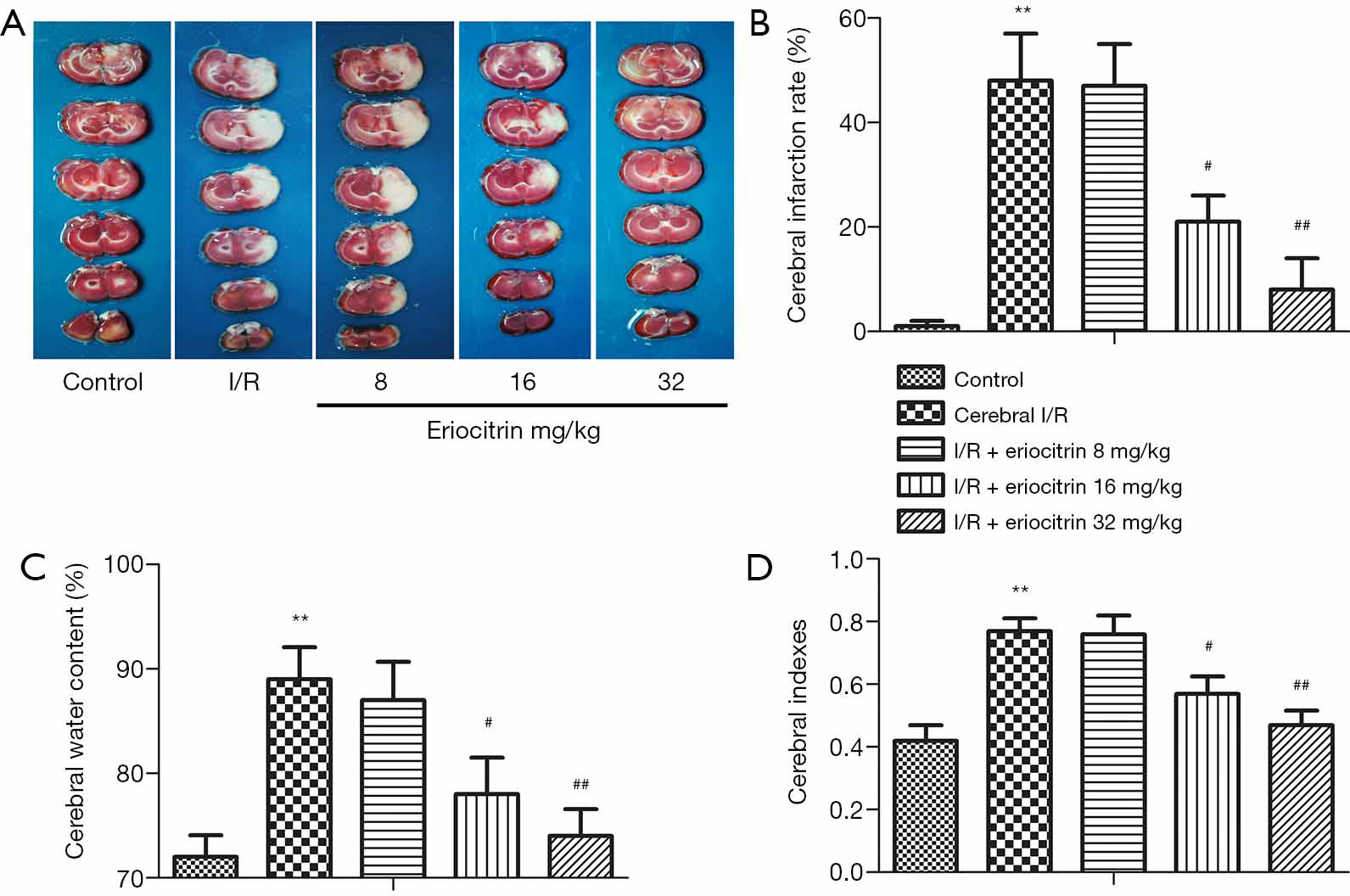 Effects of eriocitrin on histopathological injury in rats with CI/R 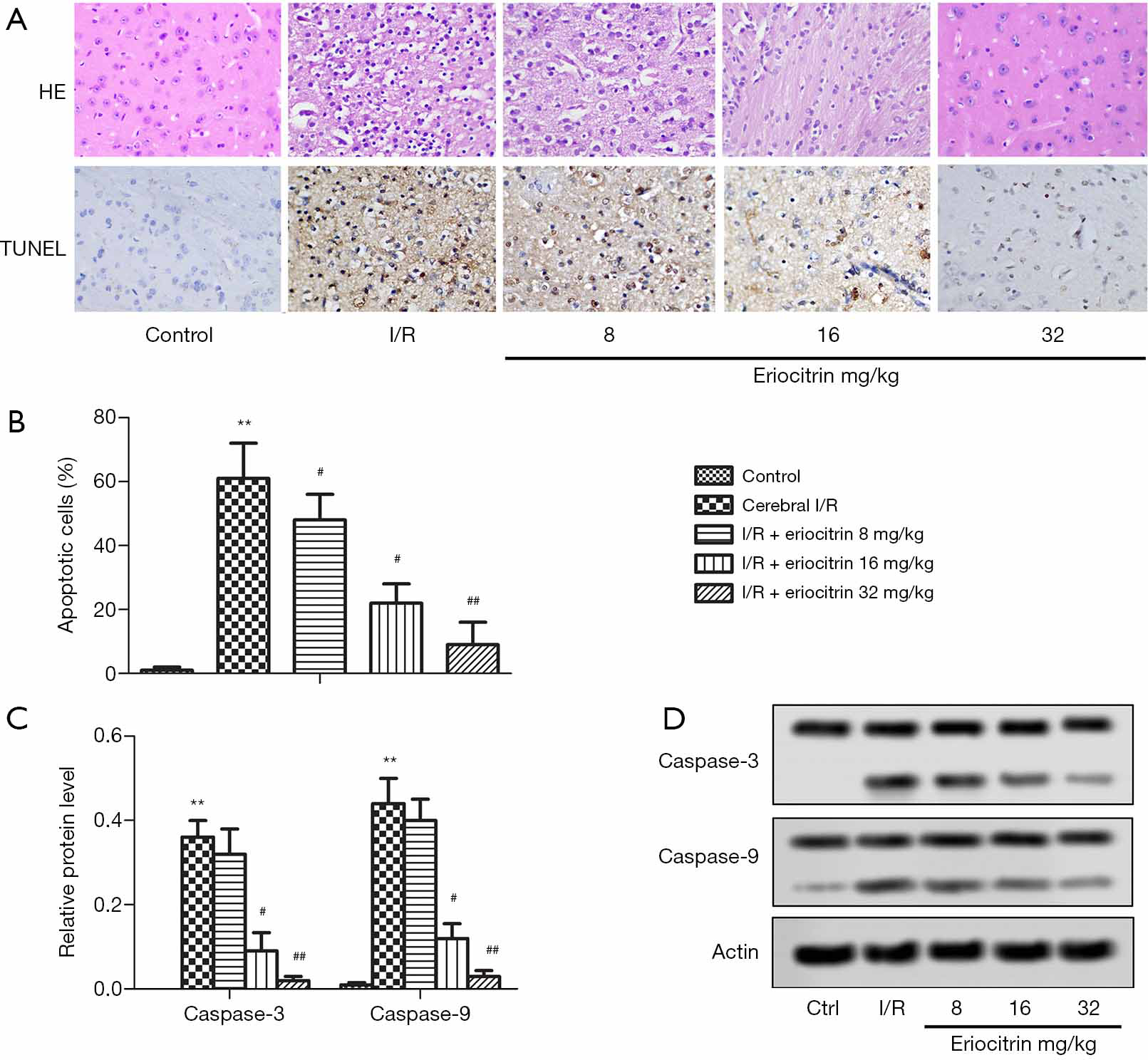 Effects of eriocitrin on oxidative injury in rats with CI/R 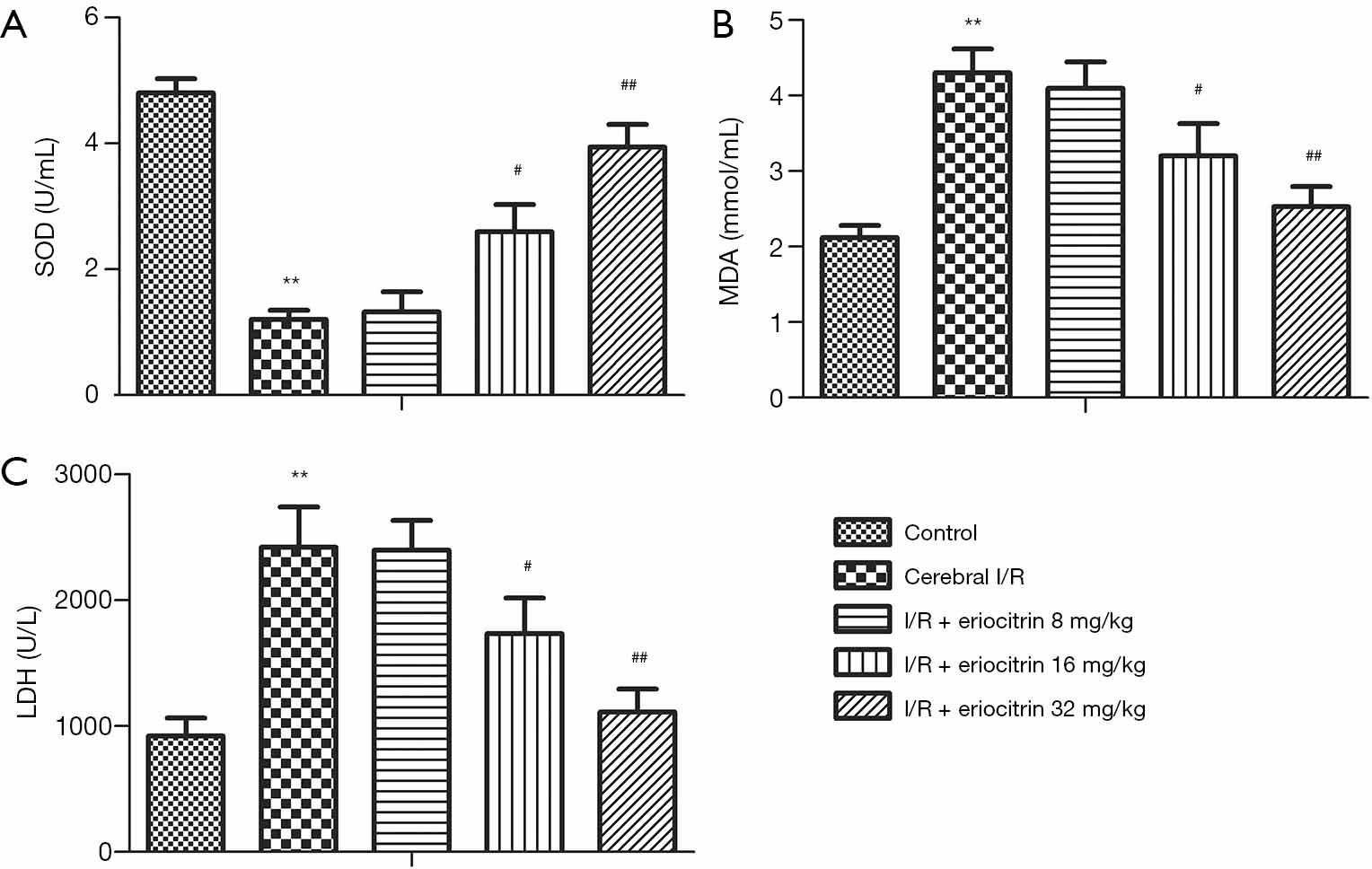 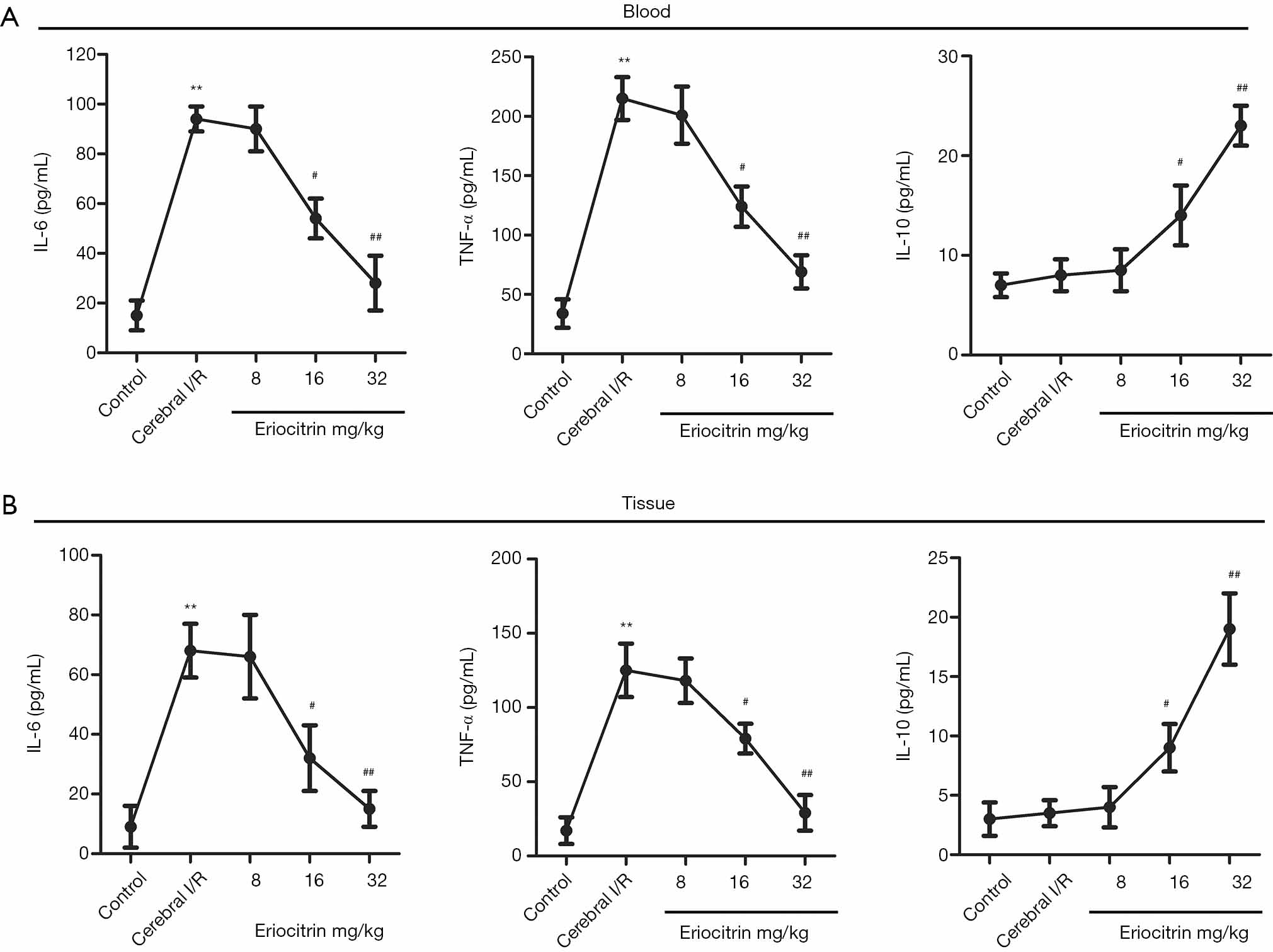 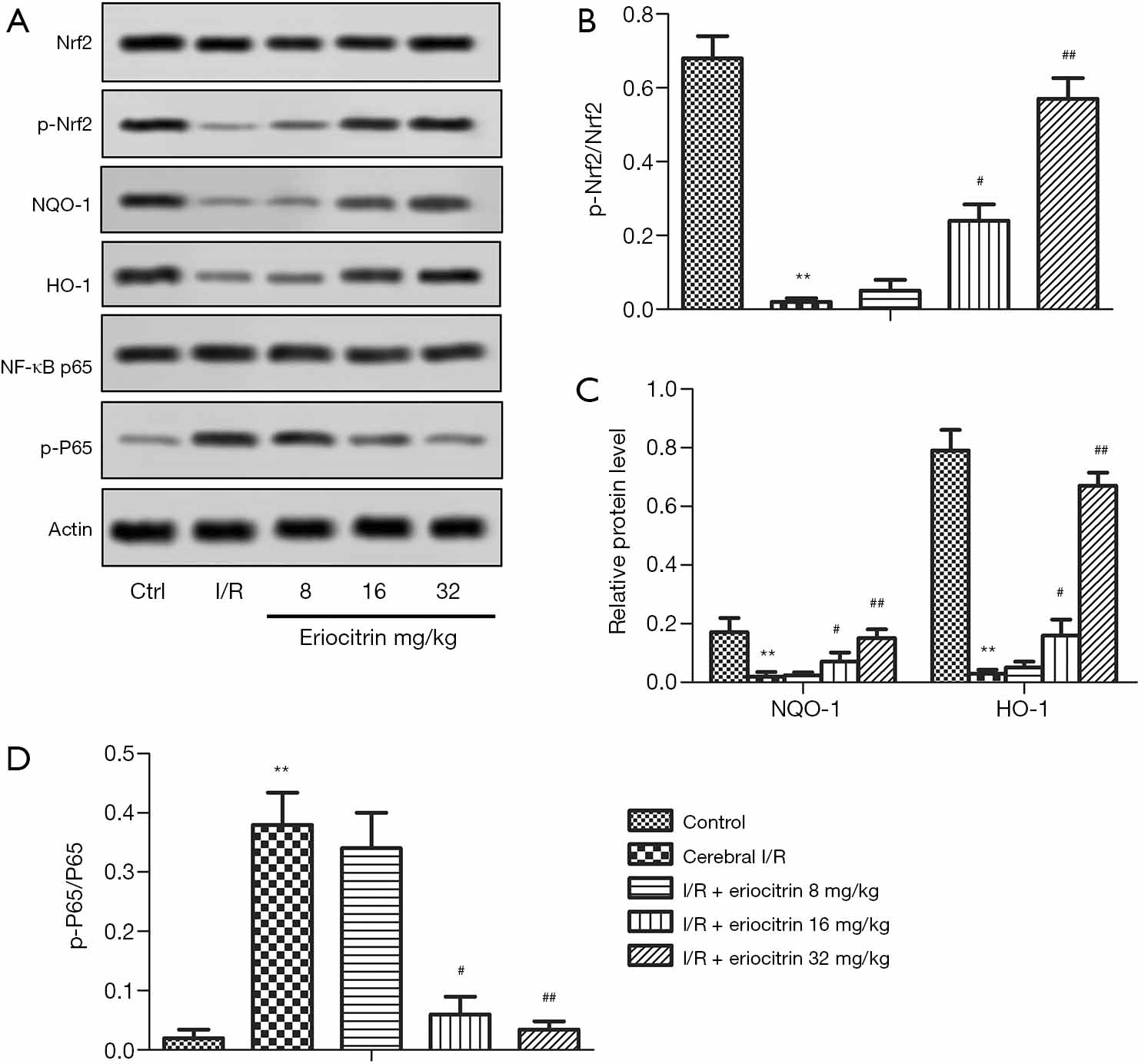 Ischemic stroke is a major cause of chronic disability and carries a high mortality rate globally (18). The most effective treatment for ischemic stroke is restoration of the blood supply to the brain tissue; however, restoring the blood supply after minutes or hours of blockage can cause cerebral I/R injury. Cerebral I/R increases the risk of brain hemorrhage, cerebral edema, and further damage to the blood-brain barrier (19). Therefore, an effective treatment for cerebral I/R injury is urgently called for.

In this study, an MCAO rat model was used to determine the effects of eriocitrin on cerebral I/R injury. The cerebral indexes reflected the extent of brain edema. Brain edema was closely related to the ischemic brain damage because it induced an increase in cranial pressure and further inhibited the blood flow to the ischemic area (20). In previous studies on treatment for cerebral I/R injury, the changes of cerebral edema and cerebral obstruction have been consistent (10,11,21). In our study, the cerebral infarct volume and cerebral water content were reduced by adequate doses of eriocitrin. These results indicate that eriocitrin could exert a protective effect on cerebral I/R injury in rats.

The effect of eriocitrin on cell apoptosis has been investigated in previous studies. In human hepatocellular carcinoma cells, it was shown to suppress proliferation by arresting cell cycle in the S phase and induce apoptosis by activating the mitochondria-involved intrinsic signaling pathway (6). Eriocitrin and its metabolites also induce apoptosis in HL-60 cells (22). There are two main pathways for cell apoptosis: the intrinsic pathway and the extrinsic pathway (23). In this study, eriocitrin reduced the levels of caspase-3 and caspase-9, which are related to apoptosis, suggesting that eriocitrin could inhibit the apoptosis and alleviate histopathological injury in rats with CI/R.

As mentioned above, oxidative stress plays a pivotal role in the process of cerebral I/R injury. Oxidative stress, which results from an imbalance between the antioxidant defense system and the production rate of reactive oxygen species (24), can destroy cell macromolecules, leading to protein modification, lipid peroxidation, and DNA damage (25). SOD is an antioxidant enzyme involved in the defense mechanism for reducing oxidative stress (26), and MDA, a product of lipid peroxidation, serves as a useful biomarker for measuring and monitoring oxidative stress (24). SOD and MDA have often been used to assess oxidative stress (27). LDH has been used to evaluate the cytopathic effect of pathogens (28), and it is increased after cerebral I/R injury (21). The results of the current study show that eriocitrin significantly lowered the content of MDA and LDH while restoring the content of SOD. These results indicated that the protective effect of eriocitrin on CI/R injury might be attributed to its antioxidative properties.

The Nrf2 pathway is an important cellular system which protects tissues from oxidative stress. Nrf2 is a master regulator of antioxidative defense responses (16). Under basal conditions, Nrf2 exists in an inactive form in the cytoplasm, maintaining a low level of Nrf2-regulated gene expression. Under stress conditions, Nrf2 transfers from the cytoplasm to the nucleus, activating the transcription of a variety of antioxidant and detoxification genes (33). The p-Nrf2 mediates its transcriptional activation, thereby regulating the downstream antioxidant enzymes against oxidative stress. Nrf2 is also related to the regulation of the expression of inflammatory genes and, as an anti-inflammatory transcription factor, it inhibits inflammatory response (17). Research has proved that Nrf2 activation has become a potential therapeutic target for neuroprotection in I/R injury (34,35). HO-1 and NQO1 are downstream antioxidant proteins of Nrf2. NF-κB is a key regulator of inflammation which promotes the production of proinflammatory cytokines (36), while NF-κBp65 is a subunit of NF-κB. The expression of p-NF-κBp65 is a sign of NF-κBp65 activation (37). HO-1 and NQO1 can inhibit the transcription of proinflammatory cytokines by blocking NF-κB activation (16). In the present study, the expressions of Nrf2, p-Nrf2, NF-κBp65, p-P65, HO-1, and HQO1 were measured. Our results demonstrated that eriocitrin alleviated oxidative injury and inflammatory response through the promotion of Nrf2 activation and the suppression of NF-κBp65 activation.

In summary, eriocitrin alleviated oxidative injury and inflammatory response in rats with CI/R via the Nrf2/HO-1 /NQO1/NF-κB signaling pathway. While eriocitrin has previously been applied as an antioxidant, to our knowledge, this is the first study to use it in the treatment of cerebral I/R injury. This study presents a promising novel treatment for cerebral I/R injury. However, the protective effects of eriocitrin in clinical application demand further investigation.

Reporting Checklist: The authors have completed the ARRIVE reporting checklist. Available at http://dx.doi.org/10.21037/atm-20-4258

Conflicts of Interest: All authors have completed the ICMJE uniform disclosure form (available at http://dx.doi.org/10.21037/atm-20-4258). The authors have no conflicts of interest to declare.

Ethical Statement: The authors are accountable for all aspects of the work in ensuring that questions related to the accuracy or integrity of any part of the work are appropriately investigated and resolved. All experiments involving animals were performed according to the National Institutes of Health (NIH) guidelines for the Care and Use of Animals. All experiments were approved by the ethics committee of the West China Hospital (No. 2018-29).